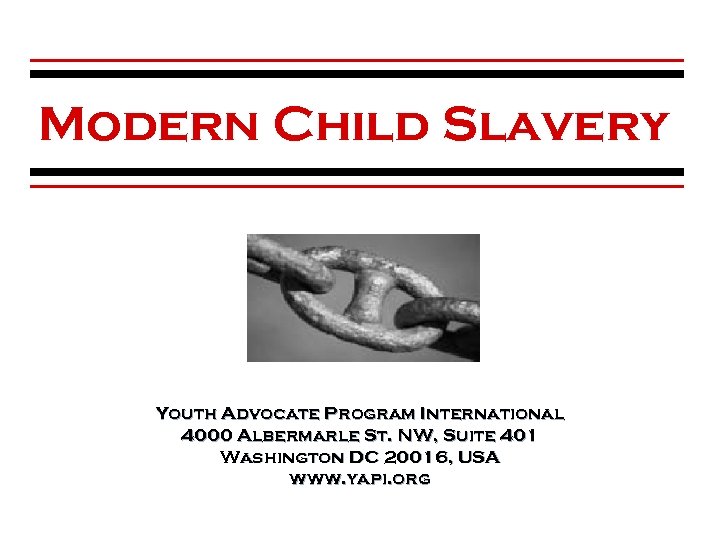 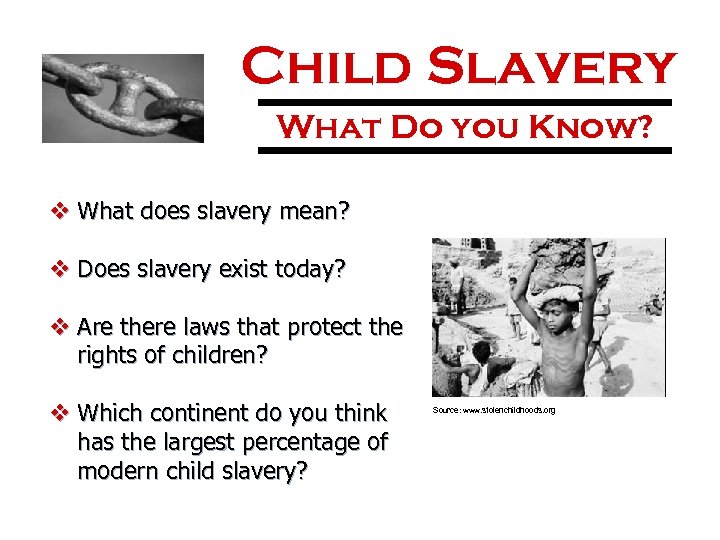 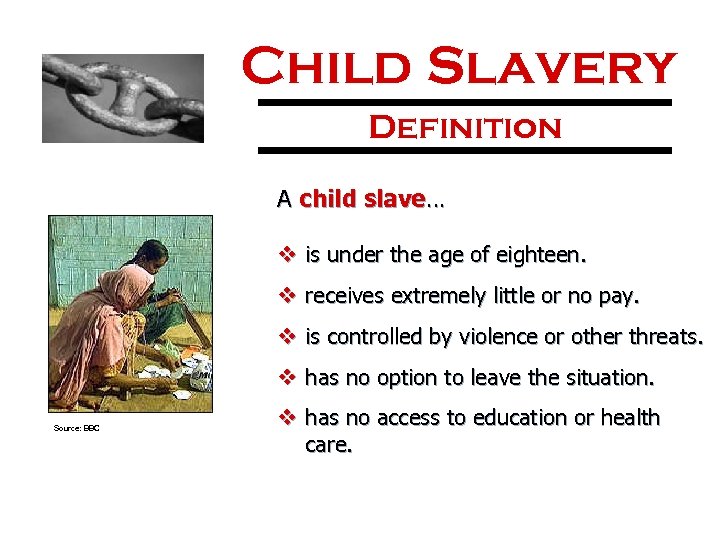 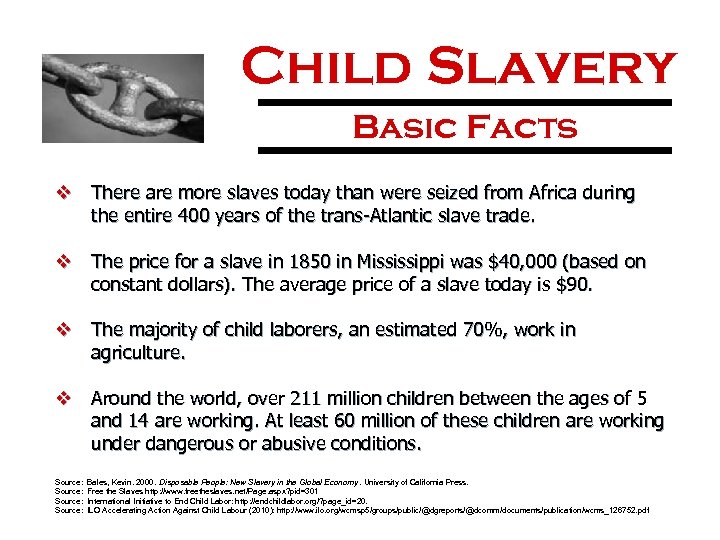 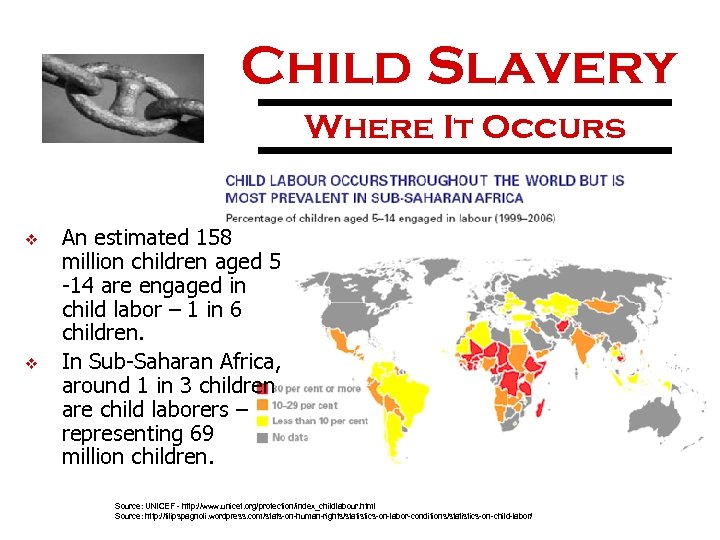 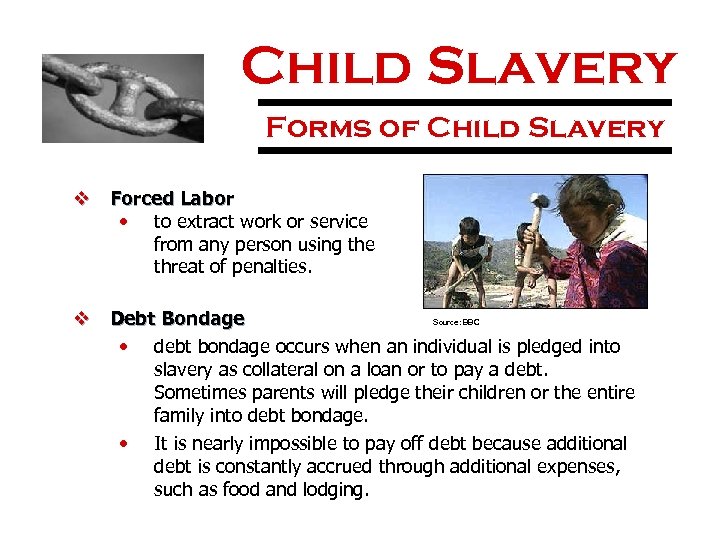 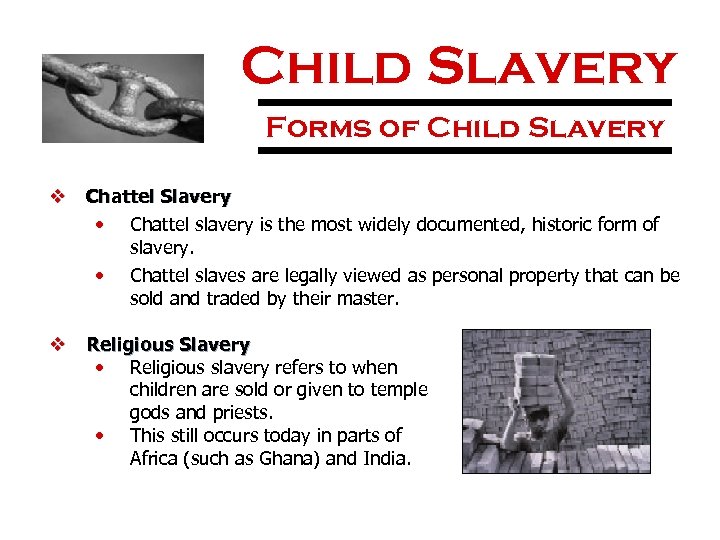 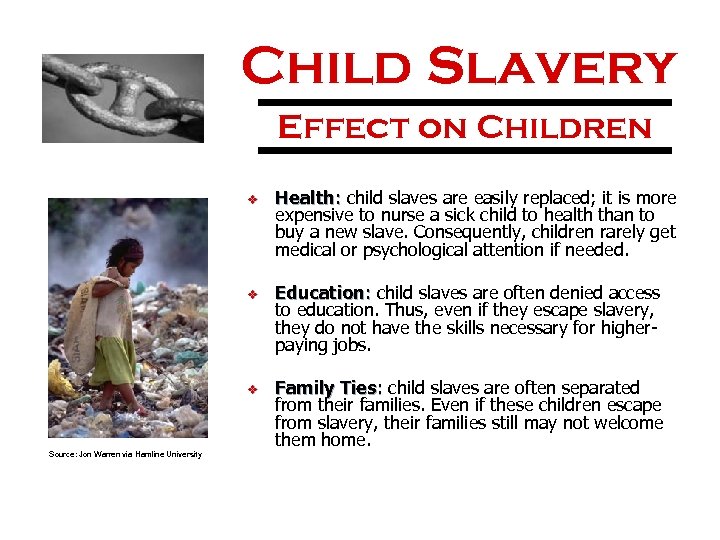 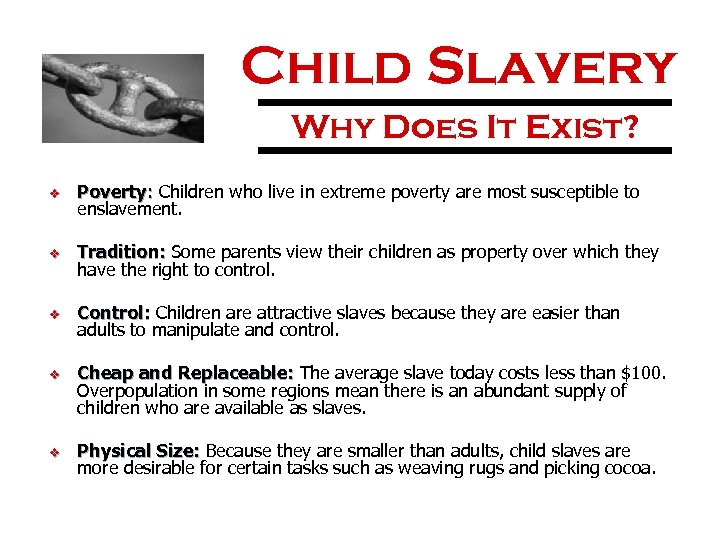 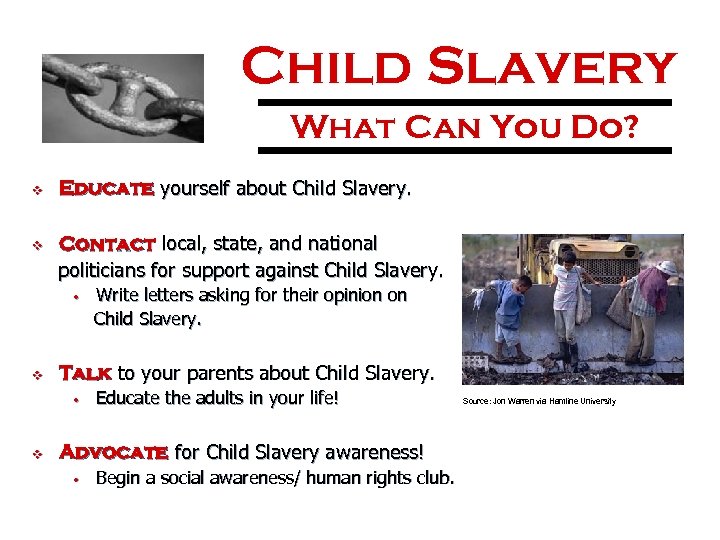 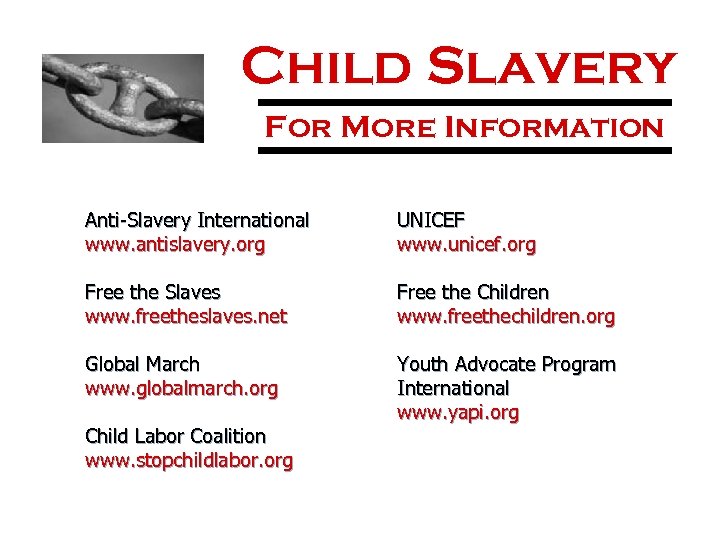 Child Slavery What Do you Know? v What does slavery mean? v Does slavery exist today? v Are there laws that protect the rights of children? v Which continent do you think has the largest percentage of modern child slavery? Source: www. stolenchildhoods. org

Child Slavery Definition A child slave… v is under the age of eighteen. v receives extremely little or no pay. v is controlled by violence or other threats. v has no option to leave the situation. Source: BBC v has no access to education or health care.

Child Slavery A Life Iqbal Masih was a child slave in Pakistan. His parents were too poor to afford food; they borrowed $16 in exchange for sending Iqbal to a carpet factory to work off the loan. Iqbal was only 4 years old. The children in the factory worked 14 hours a day, six days a week without any breaks. They were beaten and chained to their looms if they complained or tried to escape. Source: UNICEF Italy When he was 10, Iqbal learned about a new law that forbade bonded labor. He left the factory, entered school, and began to speak out on behalf of children who still worked in factories. However Iqbal’s actions made many people angry; he was shot and killed in April 1995. Iqbal was only 12 years old. Source: Stolen Dreams: Portraits of Working Children.

Child Slavery Basic Facts v There are more slaves today than were seized from Africa during the entire 400 years of the trans-Atlantic slave trade. v The price for a slave in 1850 in Mississippi was $40, 000 (based on constant dollars). The average price of a slave today is $90. v The majority of child laborers, an estimated 70%, work in agriculture. v Around the world, over 211 million children between the ages of 5 and 14 are working. At least 60 million of these children are working under dangerous or abusive conditions. Source: Bales, Kevin. 2000. Disposable People: New Slavery in the Global Economy. University of California Press. Free the Slaves http: //www. freetheslaves. net/Page. aspx? pid=301 International Initiative to End Child Labor: http: //endchildlabor. org/? page_id=20. ILO Accelerating Action Against Child Labour (2010): http: //www. ilo. org/wcmsp 5/groups/public/@dgreports/@dcomm/documents/publication/wcms_126752. pdf

Child Slavery Forms of Child Slavery v Forced Labor • to extract work or service from any person using the threat of penalties. Source: BBC v Debt Bondage • debt bondage occurs when an individual is pledged into slavery as collateral on a loan or to pay a debt. Sometimes parents will pledge their children or the entire family into debt bondage. • It is nearly impossible to pay off debt because additional debt is constantly accrued through additional expenses, such as food and lodging.

Child Slavery Forms of Child Slavery v Chattel Slavery • Chattel slavery is the most widely documented, historic form of slavery. • Chattel slaves are legally viewed as personal property that can be sold and traded by their master. v Religious Slavery • Religious slavery refers to when children are sold or given to temple gods and priests. • This still occurs today in parts of Africa (such as Ghana) and India.

Child Slavery Effect on Children v v v Source: Jon Warren via Hamline University Health: child slaves are easily replaced; it is more expensive to nurse a sick child to health than to buy a new slave. Consequently, children rarely get medical or psychological attention if needed. Education: child slaves are often denied access to education. Thus, even if they escape slavery, they do not have the skills necessary for higherpaying jobs. Family Ties: child slaves are often separated from their families. Even if these children escape from slavery, their families still may not welcome them home.

Child Slavery Why Does It Exist? v Poverty: Children who live in extreme poverty are most susceptible to enslavement. v Tradition: Some parents view their children as property over which they have the right to control. v Control: Children are attractive slaves because they are easier than adults to manipulate and control. v v Cheap and Replaceable: The average slave today costs less than $100. Overpopulation in some regions mean there is an abundant supply of children who are available as slaves. Physical Size: Because they are smaller than adults, child slaves are more desirable for certain tasks such as weaving rugs and picking cocoa.