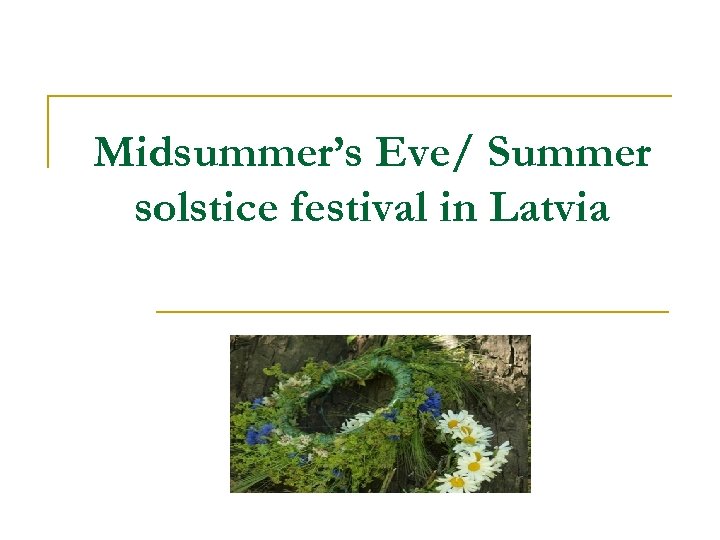 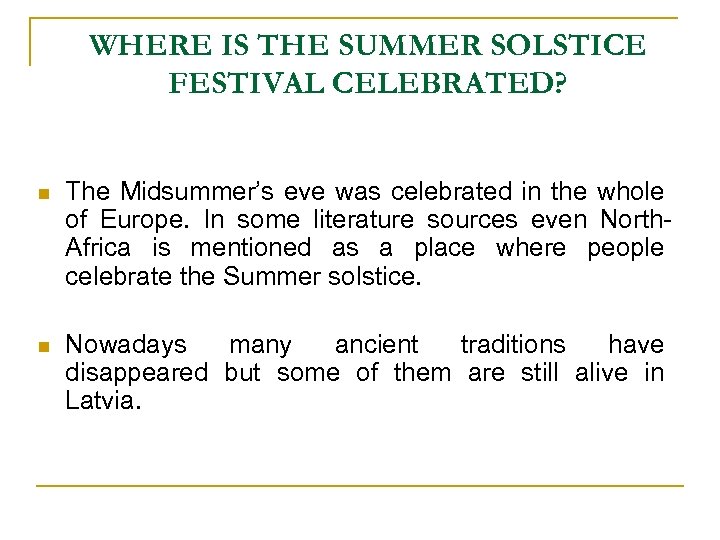 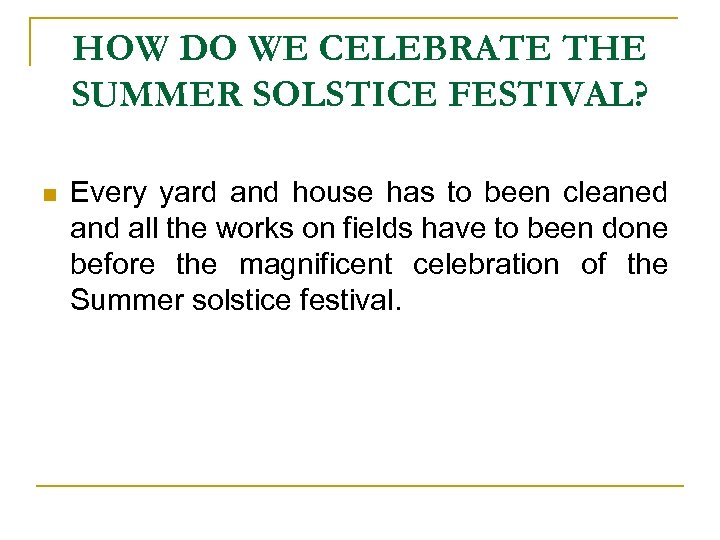 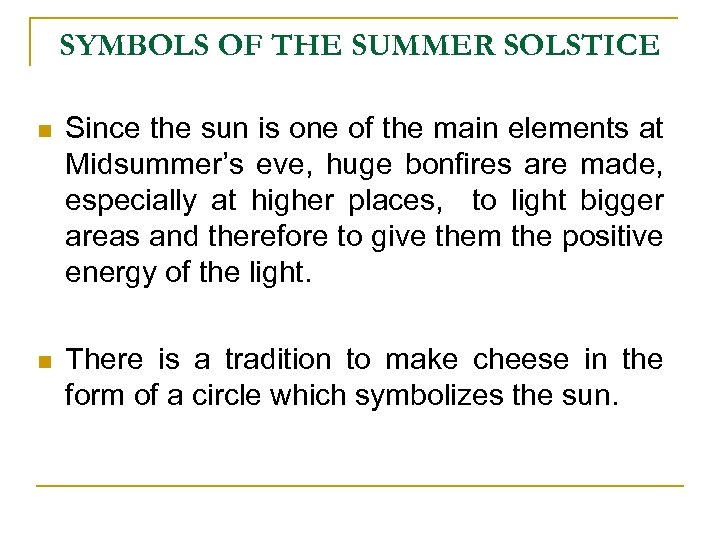 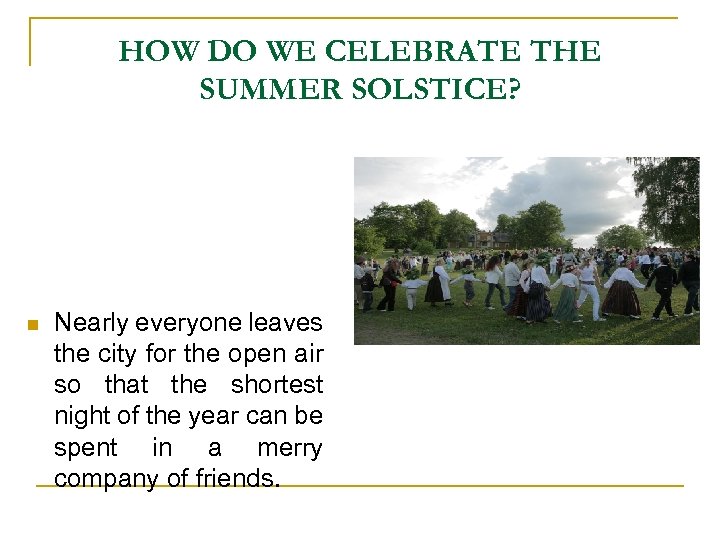 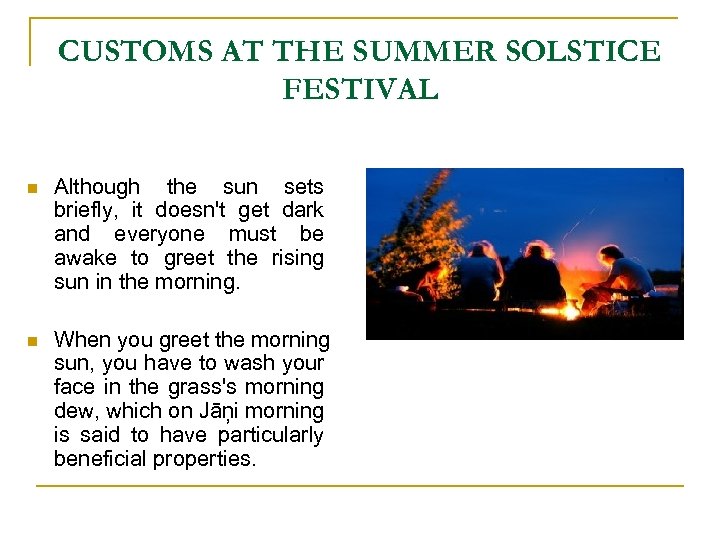 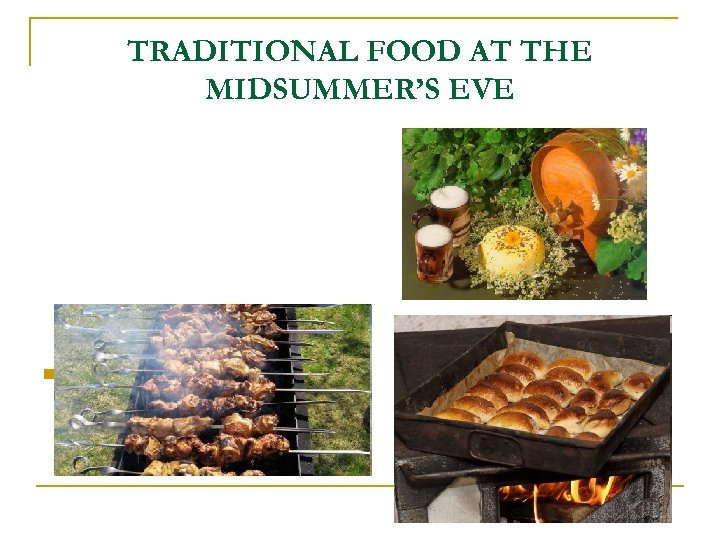 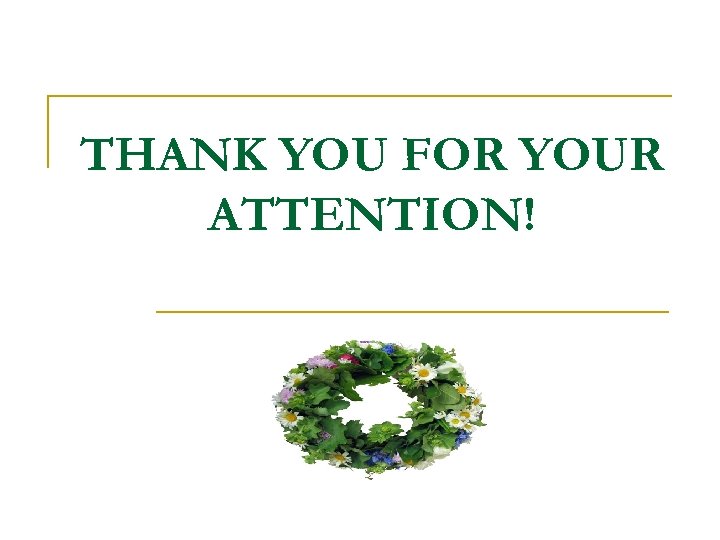 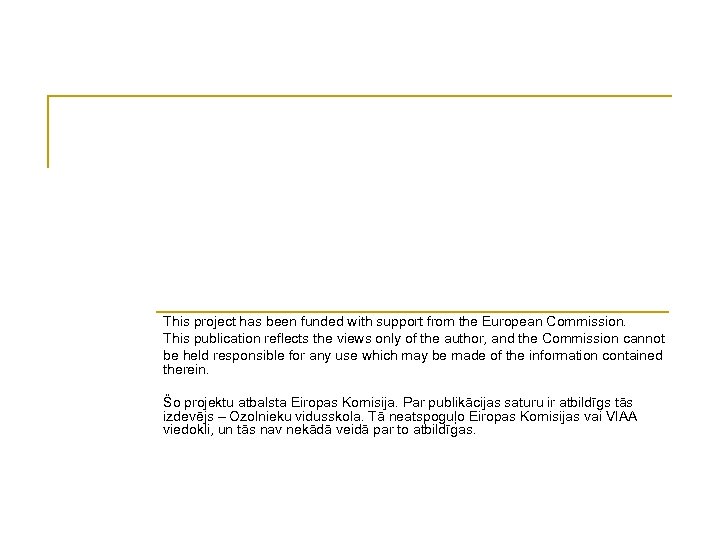 WHERE IS THE SUMMER SOLSTICE FESTIVAL CELEBRATED? n The Midsummer’s eve was celebrated in the whole of Europe. In some literature sources even North. Africa is mentioned as a place where people celebrate the Summer solstice. n Nowadays many ancient traditions have disappeared but some of them are still alive in Latvia.

WHEN DO WE CELEBRATE THE SUMMER SOLSTICE FESTIVAL? n The summer solstice festival is the most important and beloved holiday for every Latvian. In the Latvian language it is called Jāņi, when after the longest day the shortest night comes. It is celebrated at night of June 24 th. n However many traditions of both Latvians and Lithuanians relate to the days before Jāņi on June 22 nd and 23 rd when the sun and all the plants, meadow flowers and trees have a magic power.

HOW DO WE CELEBRATE THE SUMMER SOLSTICE FESTIVAL? n Every yard and house has to been cleaned and all the works on fields have to been done before the magnificent celebration of the Summer solstice festival.

n n DECORATIONS AT People pick flowers, branches to make garlands for themselves, their cattle, pets, decorate houses and farms. They believe that branches of oak, birch and rowan trees protect them and their properties against evil spirits. MIDSUMMER’S EVE

SYMBOLS OF THE SUMMER SOLSTICE n Since the sun is one of the main elements at Midsummer’s eve, huge bonfires are made, especially at higher places, to light bigger areas and therefore to give them the positive energy of the light. n There is a tradition to make cheese in the form of a circle which symbolizes the sun.

HOW DO WE CELEBRATE THE SUMMER SOLSTICE? n Nearly everyone leaves the city for the open air so that the shortest night of the year can be spent in a merry company of friends.

CUSTOMS AT THE SUMMER SOLSTICE FESTIVAL n At that day people gather around a bonfire, sing special songs called Līgo songs. The song texts are inspiring and magic. n People dance, do different actions to foretell what will happen to them in the future.

CUSTOMS AT THE SUMMER SOLSTICE FESTIVAL n Although the sun sets briefly, it doesn't get dark and everyone must be awake to greet the rising sun in the morning. n When you greet the morning sun, you have to wash your face in the grass's morning dew, which on Jāņi morning is said to have particularly beneficial properties.

TRADITIONAL FOOD AT THE MIDSUMMER’S EVE n Cheese, traditional pie filled with meat and lots of beer are on the menu.

This project has been funded with support from the European Commission. This publication reflects the views only of the author, and the Commission cannot be held responsible for any use which may be made of the information contained therein. Šo projektu atbalsta Eiropas Komisija. Par publikācijas saturu ir atbildīgs tās izdevējs – Ozolnieku vidusskola. Tā neatspoguļo Eiropas Komisijas vai VIAA viedokli, un tās nav nekādā veidā par to atbildīgas.