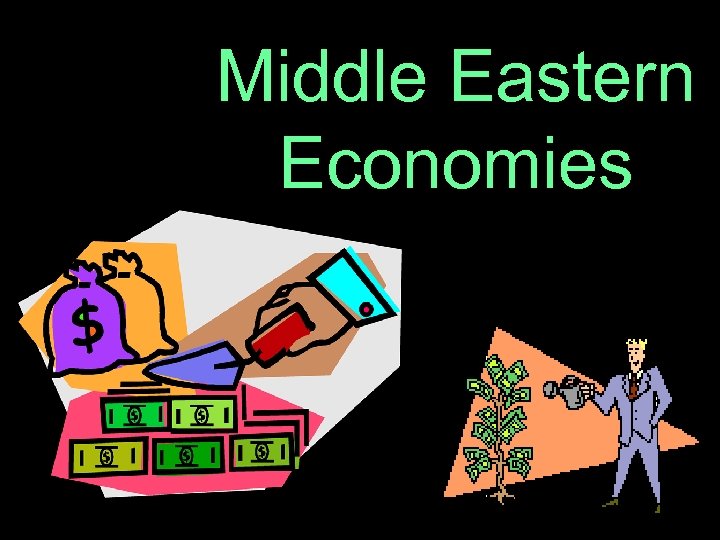 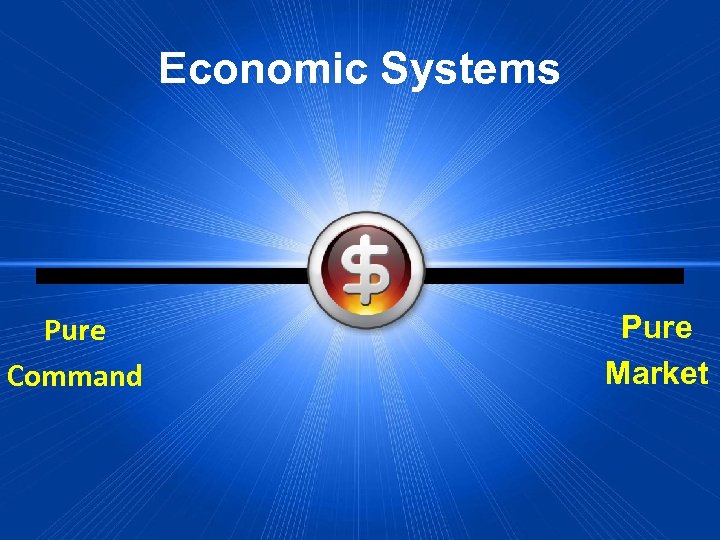 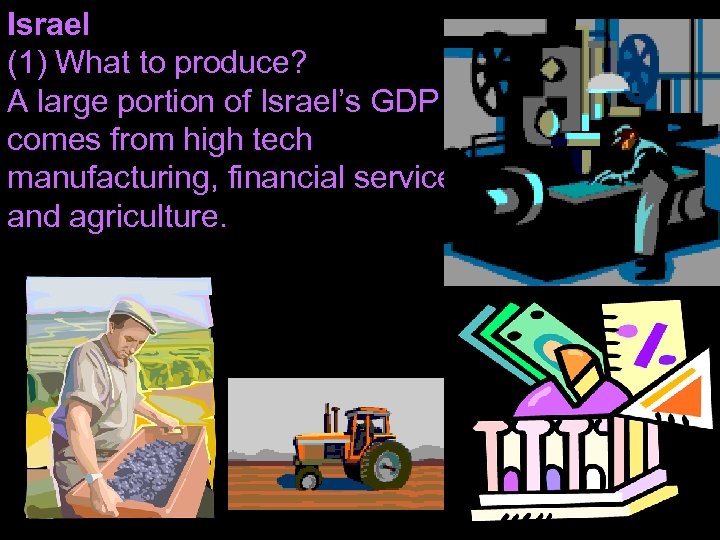 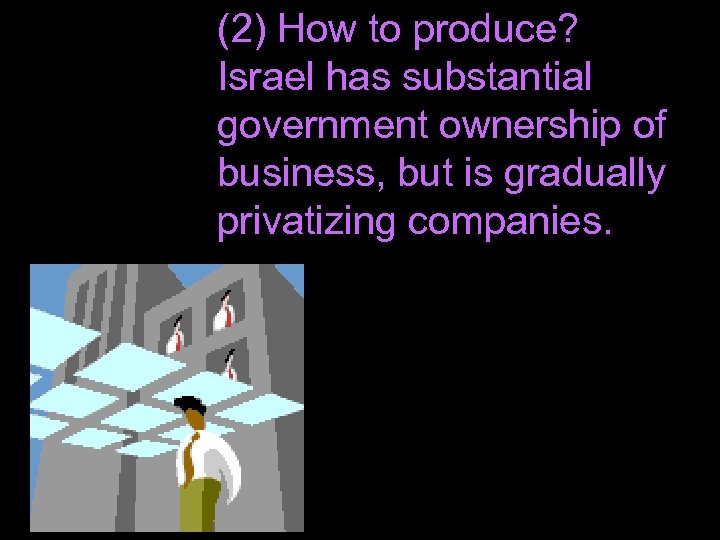 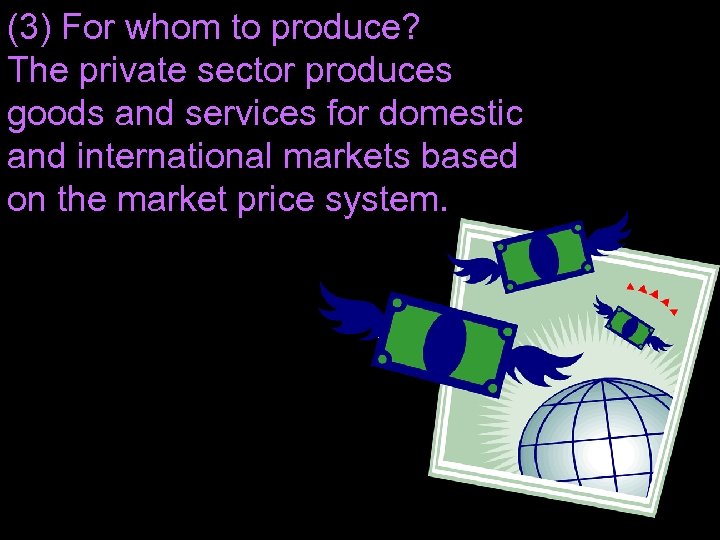 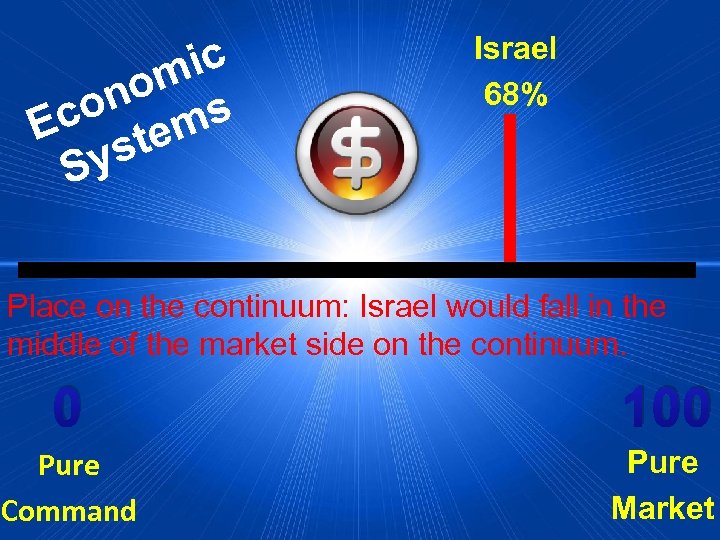 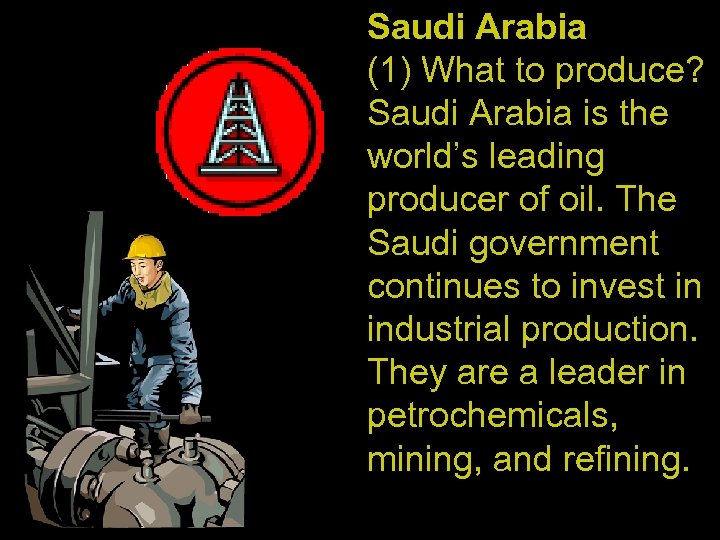 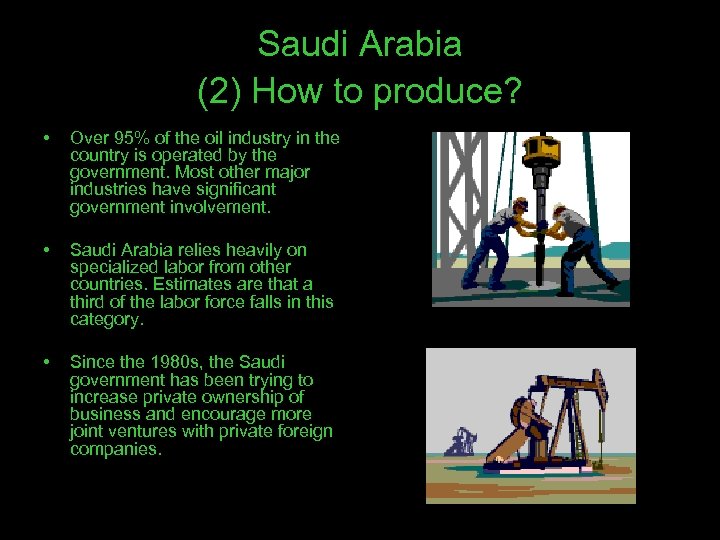 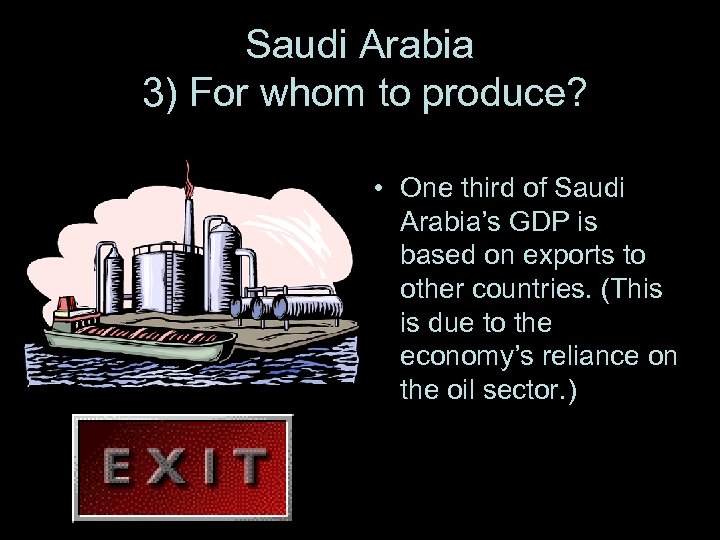 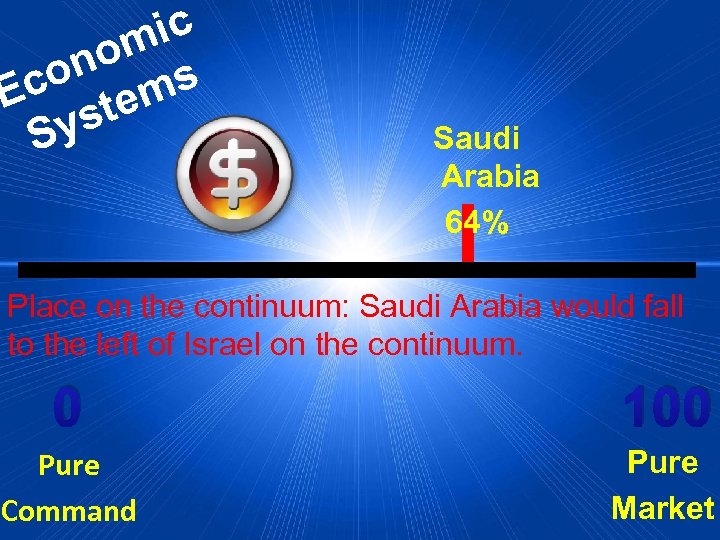 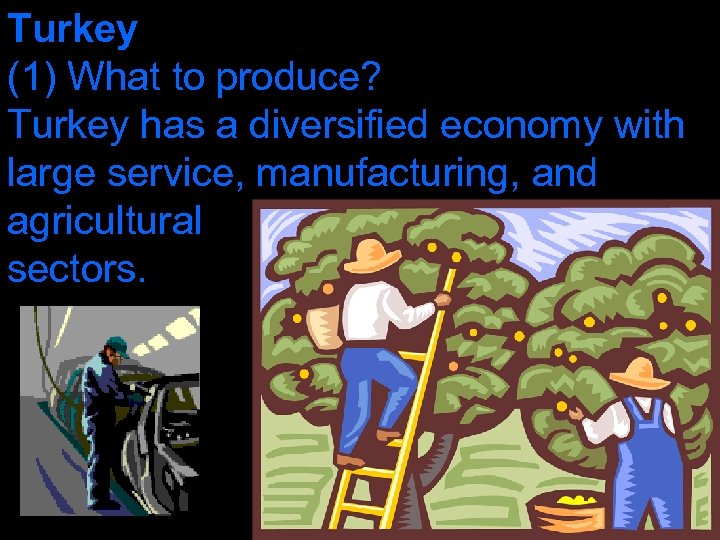 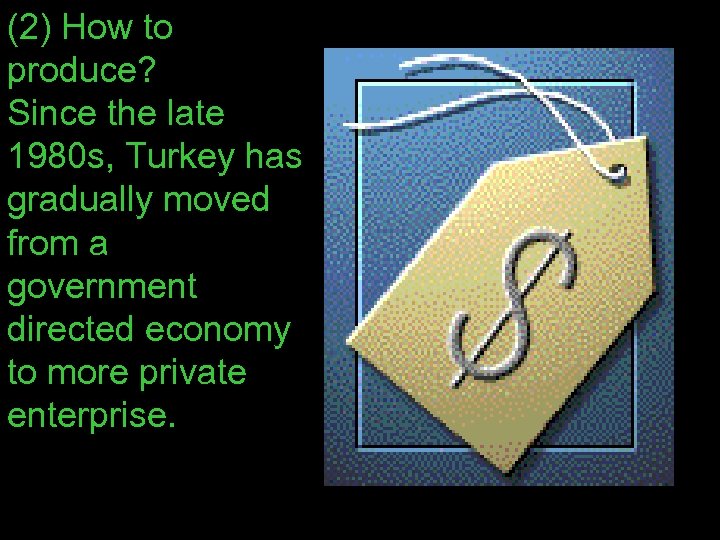 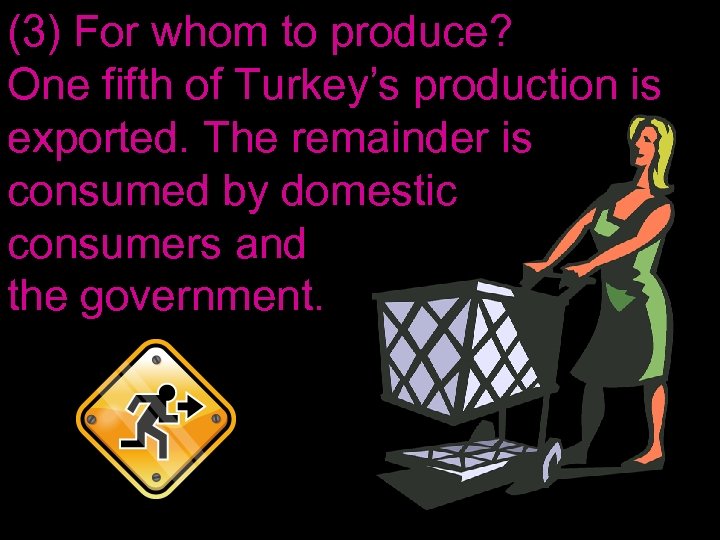 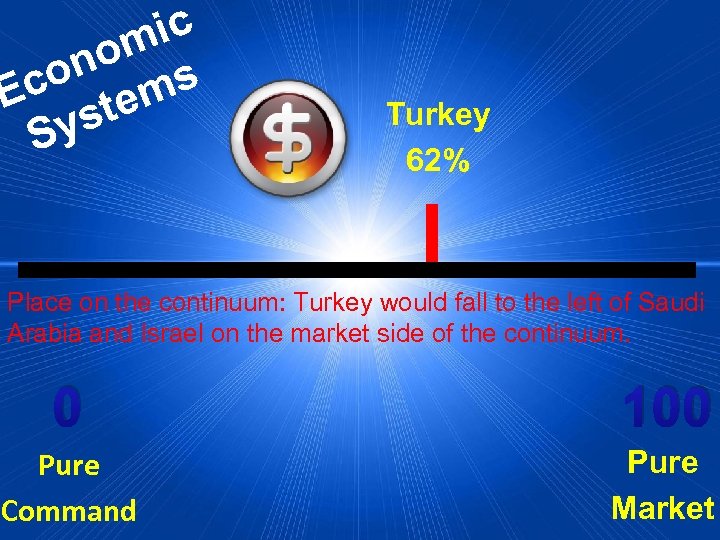 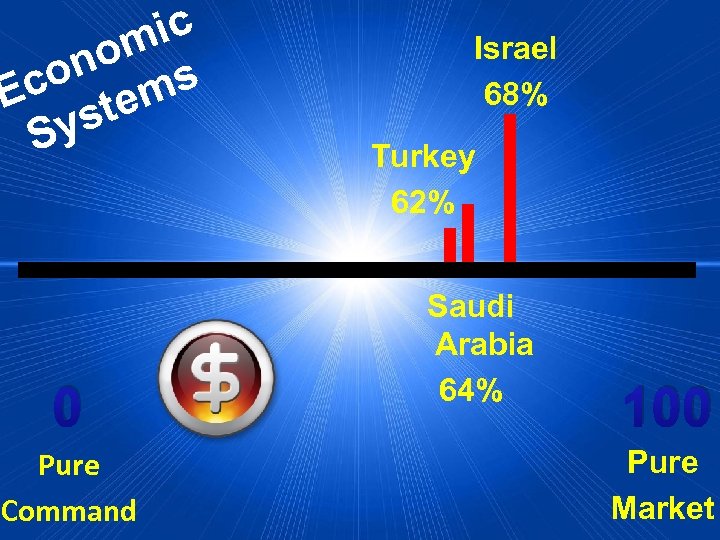 Israel (1) What to produce? A large portion of Israel’s GDP comes from high tech manufacturing, financial services, and agriculture.

(2) How to produce? Israel has substantial government ownership of business, but is gradually privatizing companies.

(3) For whom to produce? The private sector produces goods and services for domestic and international markets based on the market price system.

Saudi Arabia (1) What to produce? Saudi Arabia is the world’s leading producer of oil. The Saudi government continues to invest in industrial production. They are a leader in petrochemicals, mining, and refining.

Saudi Arabia (2) How to produce? • Over 95% of the oil industry in the country is operated by the government. Most other major industries have significant government involvement. • Saudi Arabia relies heavily on specialized labor from other countries. Estimates are that a third of the labor force falls in this category. • Since the 1980 s, the Saudi government has been trying to increase private ownership of business and encourage more joint ventures with private foreign companies.

Saudi Arabia 3) For whom to produce? • One third of Saudi Arabia’s GDP is based on exports to other countries. (This is due to the economy’s reliance on the oil sector. )

Turkey (1) What to produce? Turkey has a diversified economy with large service, manufacturing, and agricultural sectors.

(2) How to produce? Since the late 1980 s, Turkey has gradually moved from a government directed economy to more private enterprise.

(3) For whom to produce? One fifth of Turkey’s production is exported. The remainder is consumed by domestic consumers and the government.

ic om on ms Ec te ys S Turkey 62% Place on the continuum: Turkey would fall to the left of Saudi Arabia and Israel on the market side of the continuum. 0 100 Pure Command Pure Market