MEMBERS OF THE HOUSE OF COMMONS THE 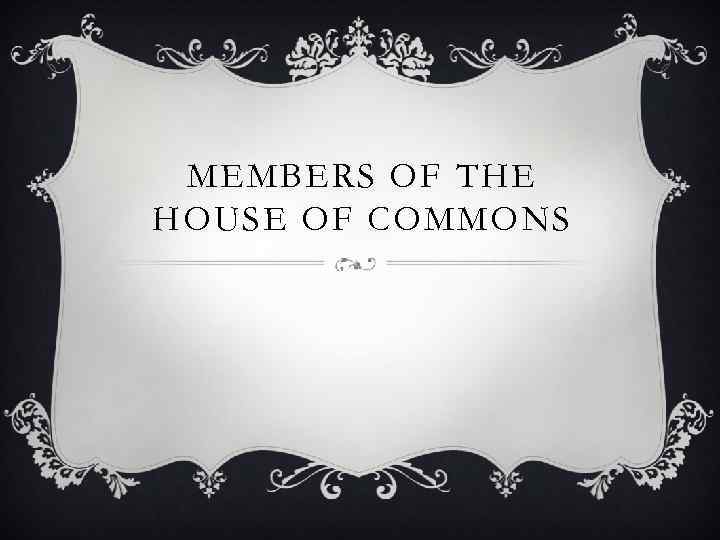 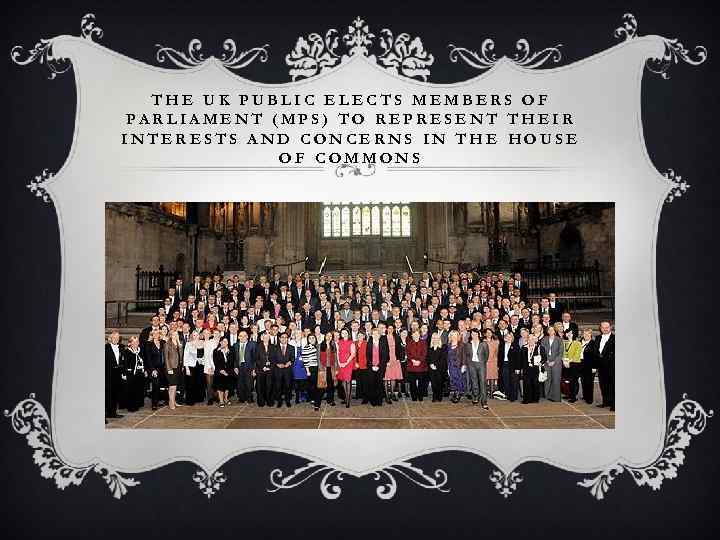 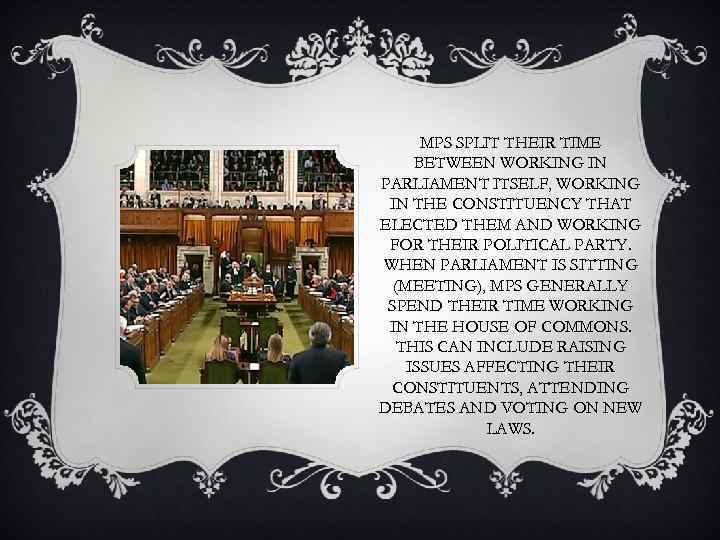 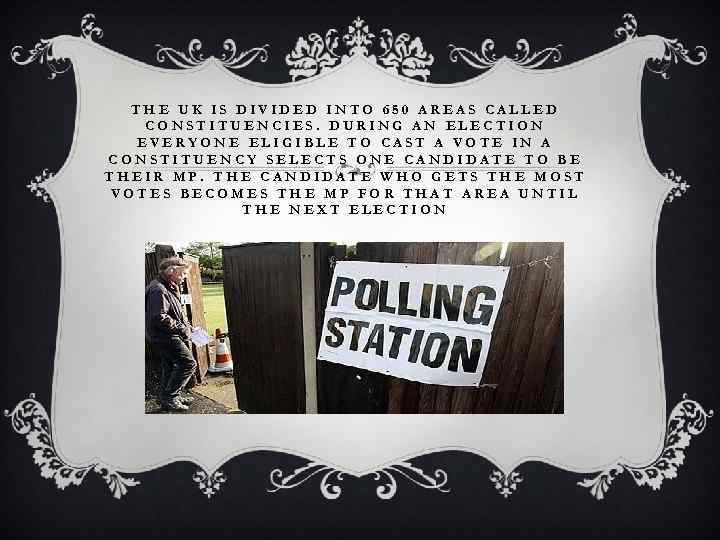 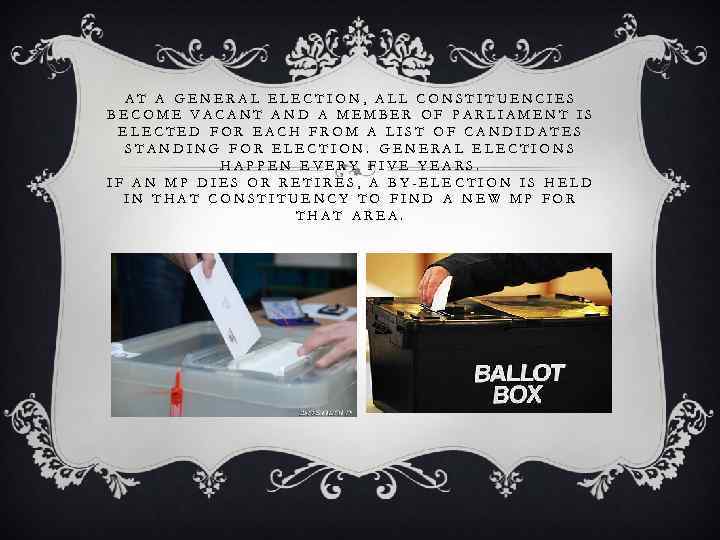 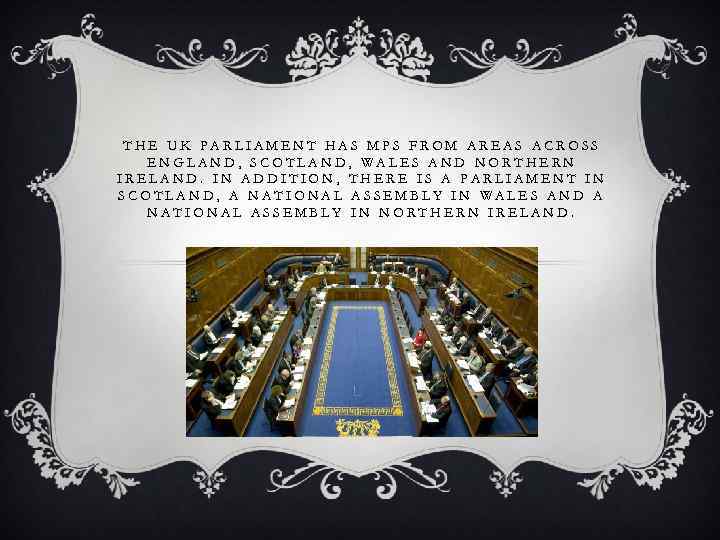 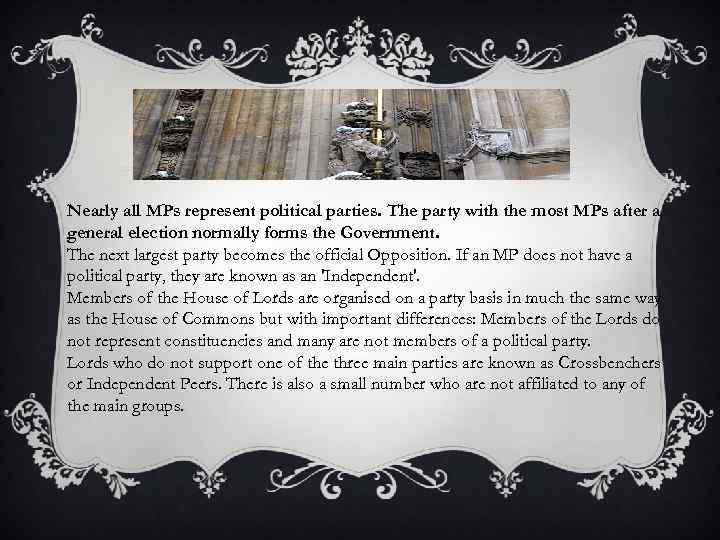 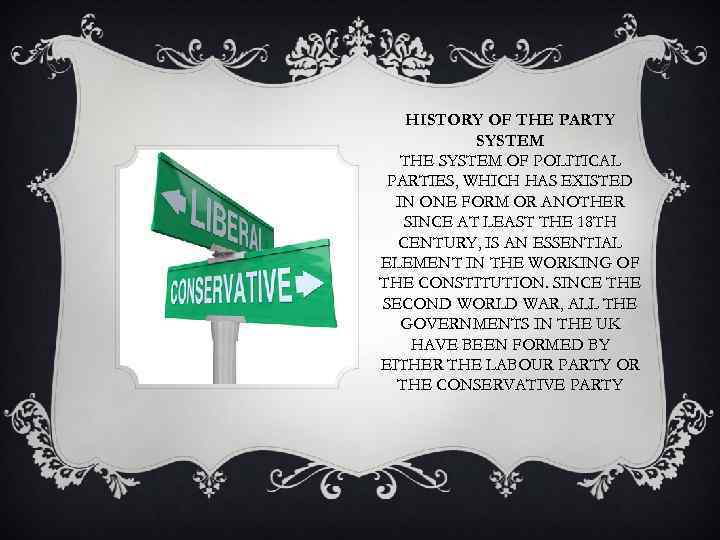 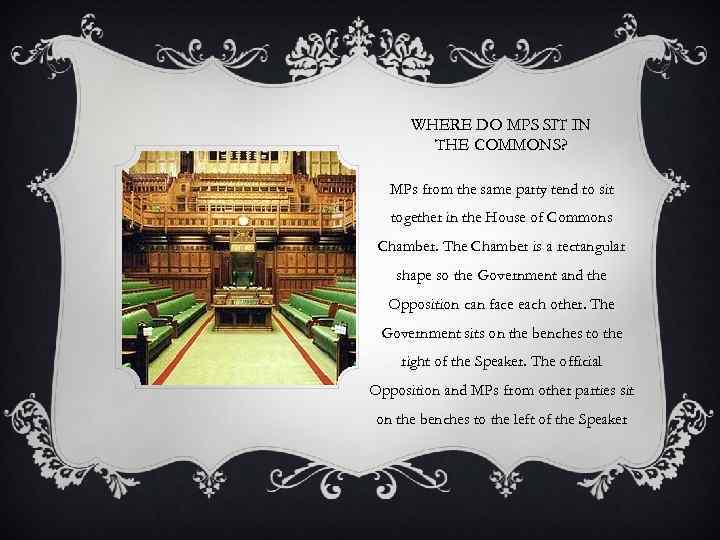 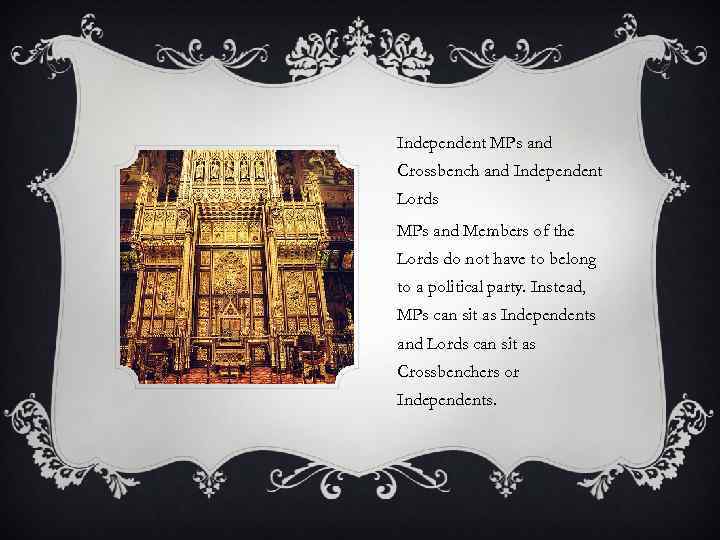 Скачать презентацию MEMBERS OF THE HOUSE OF COMMONS THE

Members of the House of Commons.pptx

MEMBERS OF THE HOUSE OF COMMONS

THE UK IS DIVIDED INTO 650 AREAS CALLED CONSTITUENCIES. DURING AN ELECTION EVERYONE ELIGIBLE TO CAST A VOTE IN A CONSTITUENCY SELECTS ONE CANDIDATE TO BE THEIR MP. THE CANDIDATE WHO GETS THE MOST VOTES BECOMES THE MP FOR THAT AREA UNTIL THE NEXT ELECTION

AT A GENERAL ELECTION, ALL CONSTITUENCIES BECOME VACANT AND A MEMBER OF PARLIAMENT IS ELECTED FOR EACH FROM A LIST OF CANDIDATES STANDING FOR ELECTION. GENERAL ELECTIONS HAPPEN EVERY FIVE YEARS. IF AN MP DIES OR RETIRES, A BY-ELECTION IS HELD IN THAT CONSTITUENCY TO FIND A NEW MP FOR THAT AREA.

Nearly all MPs represent political parties. The party with the most MPs after a general election normally forms the Government. The next largest party becomes the official Opposition. If an MP does not have a political party, they are known as an 'Independent'. Members of the House of Lords are organised on a party basis in much the same way as the House of Commons but with important differences: Members of the Lords do not represent constituencies and many are not members of a political party. Lords who do not support one of the three main parties are known as Crossbenchers or Independent Peers. There is also a small number who are not affiliated to any of the main groups.

HISTORY OF THE PARTY SYSTEM THE SYSTEM OF POLITICAL PARTIES, WHICH HAS EXISTED IN ONE FORM OR ANOTHER SINCE AT LEAST THE 18 TH CENTURY, IS AN ESSENTIAL ELEMENT IN THE WORKING OF THE CONSTITUTION. SINCE THE SECOND WORLD WAR, ALL THE GOVERNMENTS IN THE UK HAVE BEEN FORMED BY EITHER THE LABOUR PARTY OR THE CONSERVATIVE PARTY

Structure of the Central Government of the UK

The image of leader in the Russian cartoons