MEDIATION IN POLAND not Aneta Wilkowska-Płóciennik The Mediation 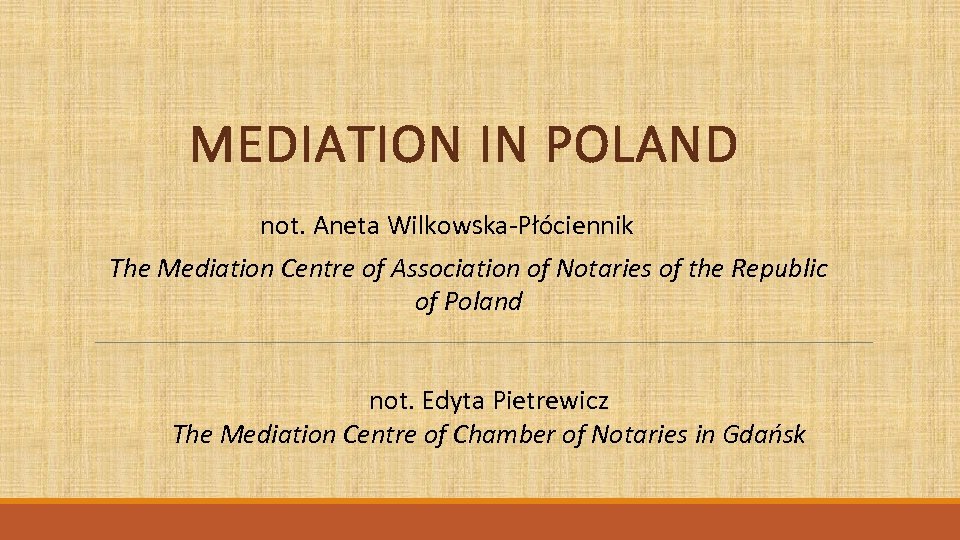 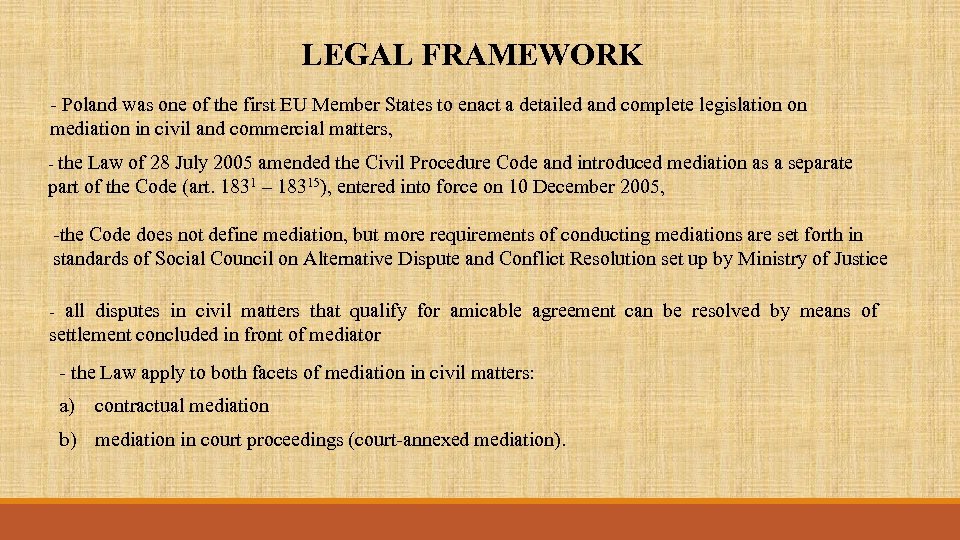 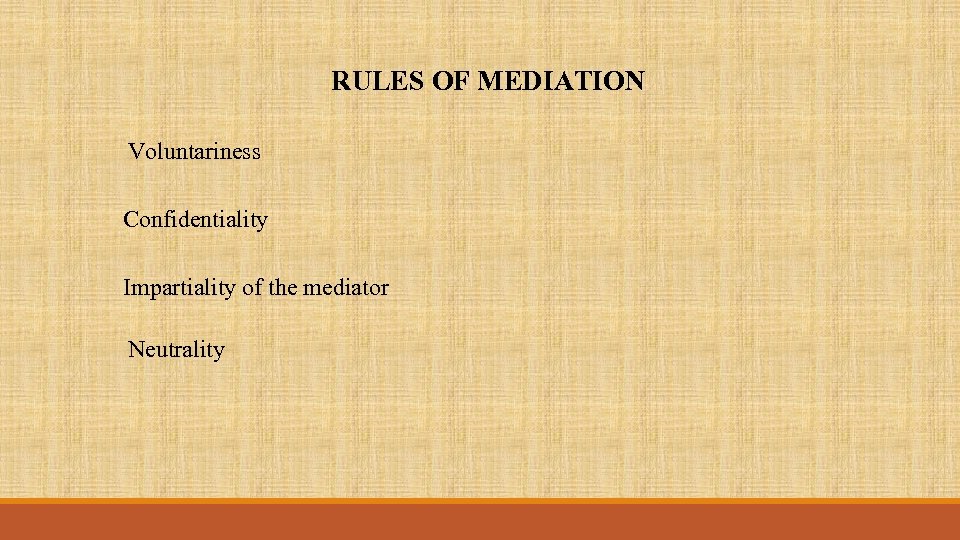 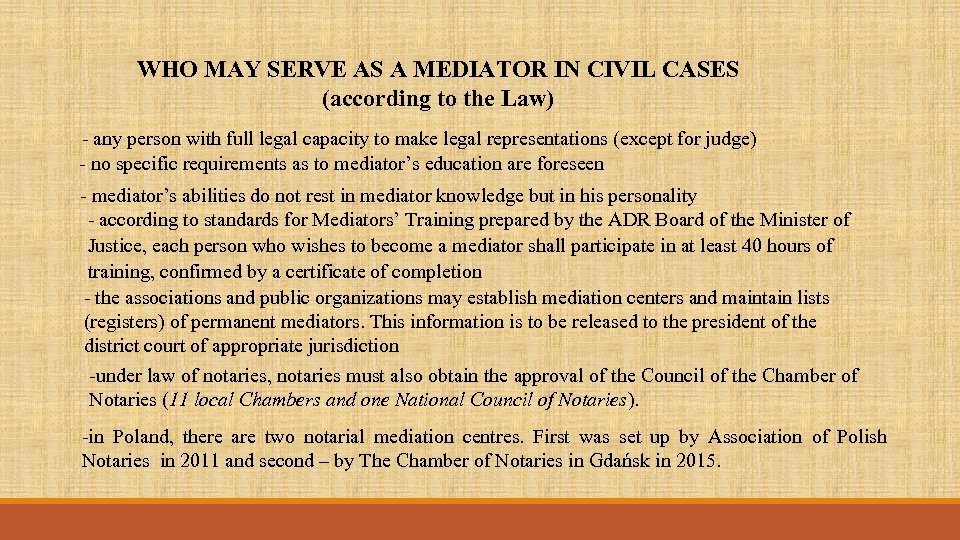 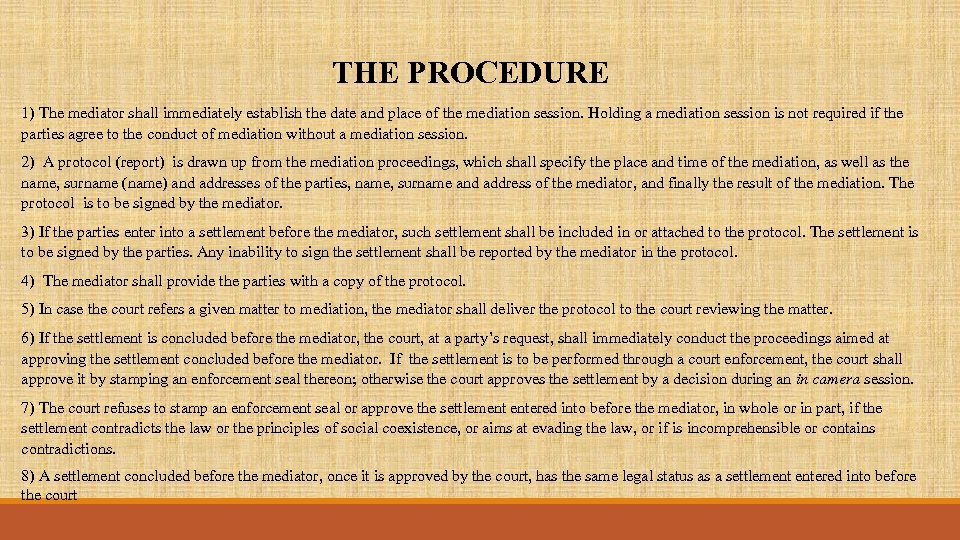 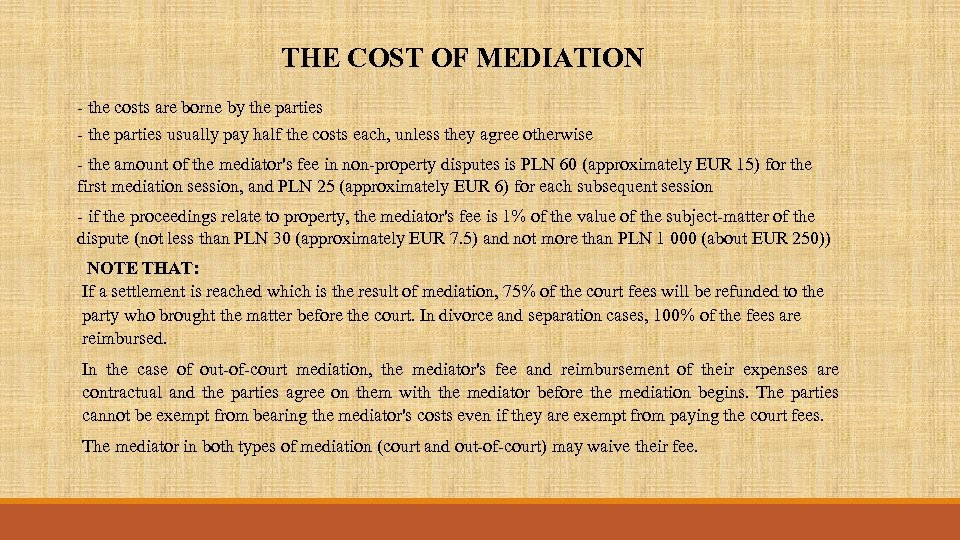 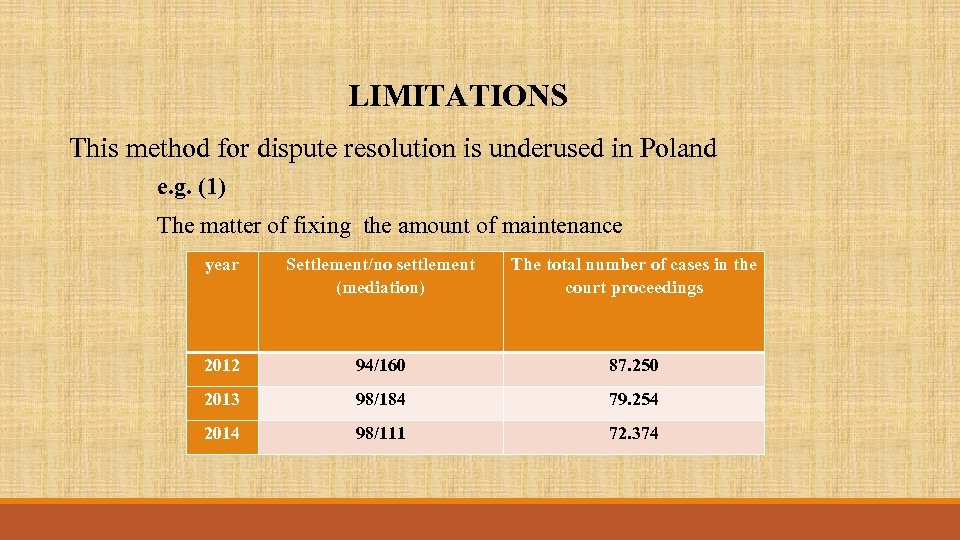 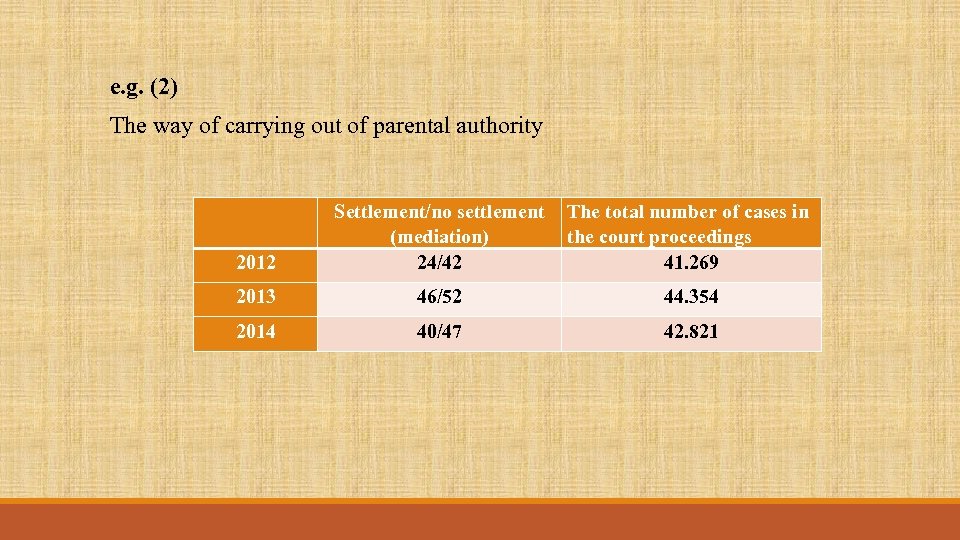 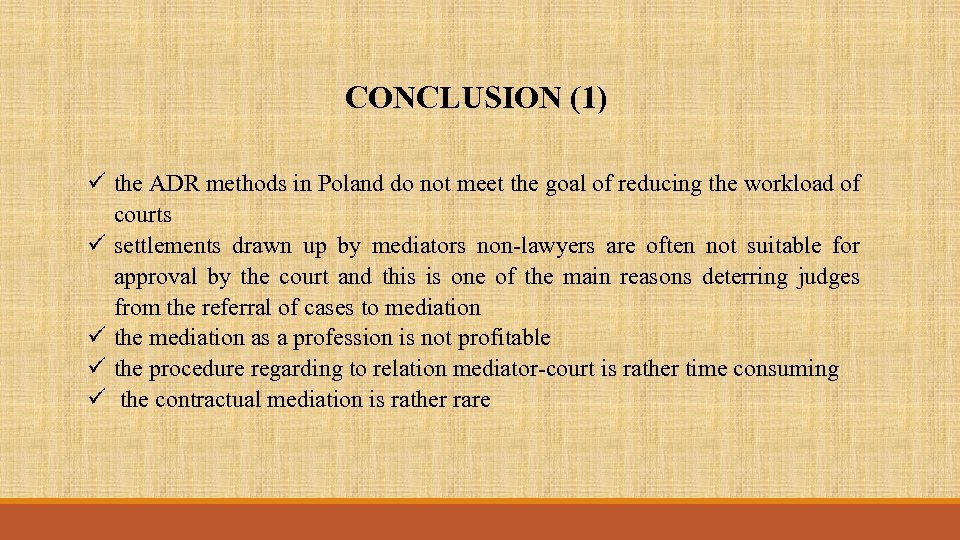 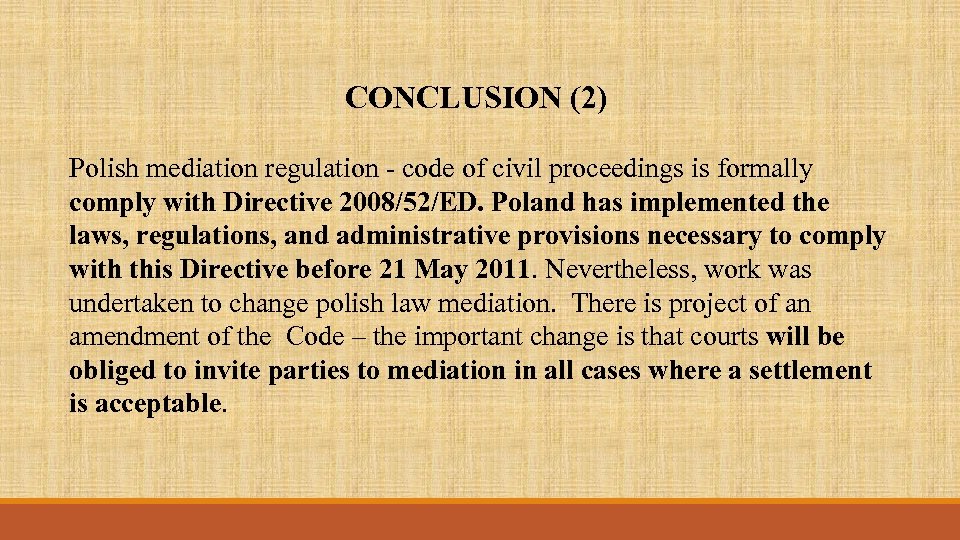 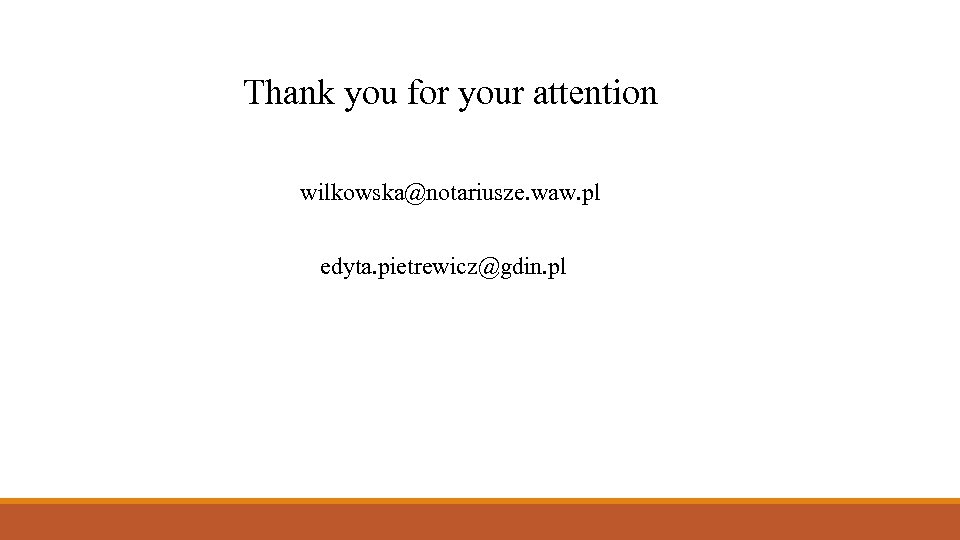 Скачать презентацию MEDIATION IN POLAND not Aneta Wilkowska-Płóciennik The Mediation

LEGAL FRAMEWORK - Poland was one of the first EU Member States to enact a detailed and complete legislation on mediation in civil and commercial matters, - the Law of 28 July 2005 amended the Civil Procedure Code and introduced mediation as a separate part of the Code (art. 1831 – 18315), entered into force on 10 December 2005, -the Code does not define mediation, but more requirements of conducting mediations are set forth in standards of Social Council on Alternative Dispute and Conflict Resolution set up by Ministry of Justice - all disputes in civil matters that qualify for amicable agreement can be resolved by means of settlement concluded in front of mediator - the Law apply to both facets of mediation in civil matters: a) contractual mediation b) mediation in court proceedings (court-annexed mediation).

RULES OF MEDIATION Voluntariness Confidentiality Impartiality of the mediator Neutrality

WHO MAY SERVE AS A MEDIATOR IN CIVIL CASES (according to the Law) - any person with full legal capacity to make legal representations (except for judge) - no specific requirements as to mediator’s education are foreseen - mediator’s abilities do not rest in mediator knowledge but in his personality - according to standards for Mediators’ Training prepared by the ADR Board of the Minister of Justice, each person who wishes to become a mediator shall participate in at least 40 hours of training, confirmed by a certificate of completion - the associations and public organizations may establish mediation centers and maintain lists (registers) of permanent mediators. This information is to be released to the president of the district court of appropriate jurisdiction -under law of notaries, notaries must also obtain the approval of the Council of the Chamber of Notaries (11 local Chambers and one National Council of Notaries). -in Poland, there are two notarial mediation centres. First was set up by Association of Polish Notaries in 2011 and second – by The Chamber of Notaries in Gdańsk in 2015.

THE COST OF MEDIATION - the costs are borne by the parties - the parties usually pay half the costs each, unless they agree otherwise - the amount of the mediator's fee in non-property disputes is PLN 60 (approximately EUR 15) for the first mediation session, and PLN 25 (approximately EUR 6) for each subsequent session - if the proceedings relate to property, the mediator's fee is 1% of the value of the subject-matter of the dispute (not less than PLN 30 (approximately EUR 7. 5) and not more than PLN 1 000 (about EUR 250)) NOTE THAT: If a settlement is reached which is the result of mediation, 75% of the court fees will be refunded to the party who brought the matter before the court. In divorce and separation cases, 100% of the fees are reimbursed. In the case of out-of-court mediation, the mediator's fee and reimbursement of their expenses are contractual and the parties agree on them with the mediator before the mediation begins. The parties cannot be exempt from bearing the mediator's costs even if they are exempt from paying the court fees. The mediator in both types of mediation (court and out-of-court) may waive their fee.

CONCLUSION (2) Polish mediation regulation - code of civil proceedings is formally comply with Directive 2008/52/ED. Poland has implemented the laws, regulations, and administrative provisions necessary to comply with this Directive before 21 May 2011. Nevertheless, work was undertaken to change polish law mediation. There is project of an amendment of the Code – the important change is that courts will be obliged to invite parties to mediation in all cases where a settlement is acceptable.