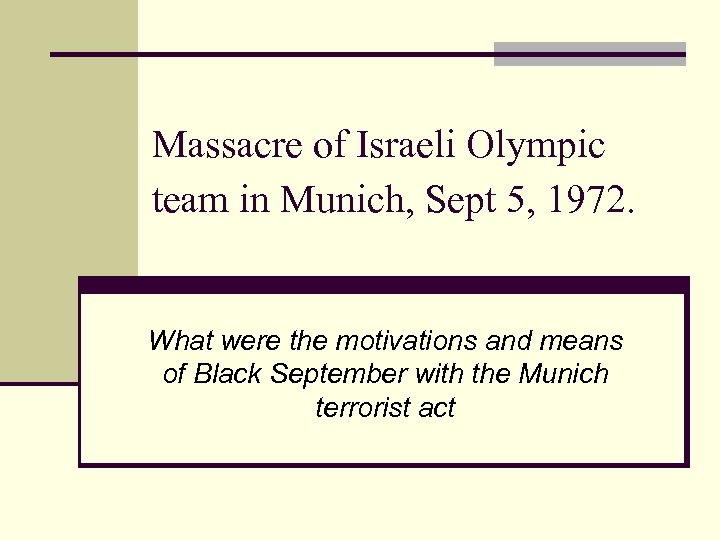 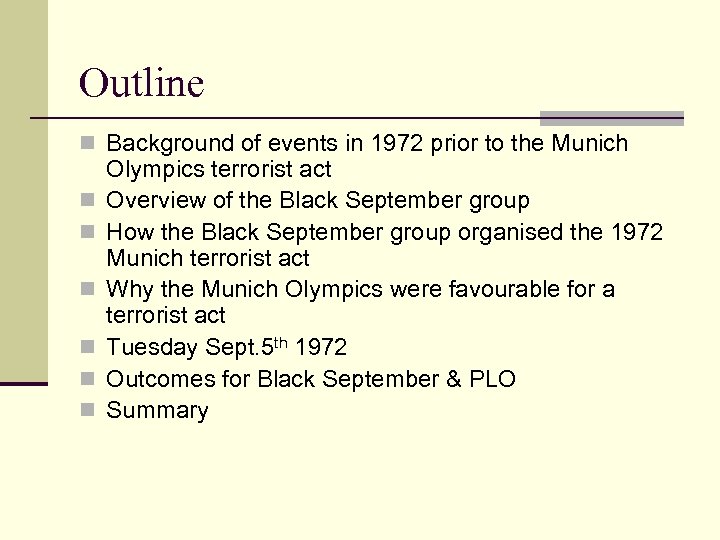 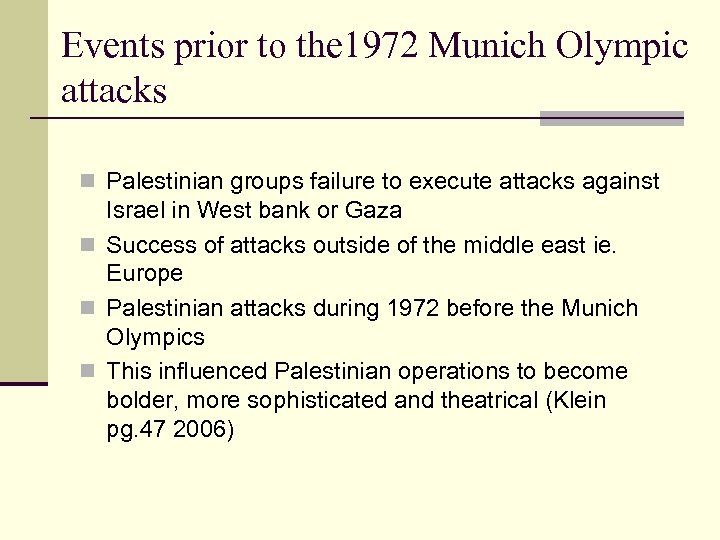 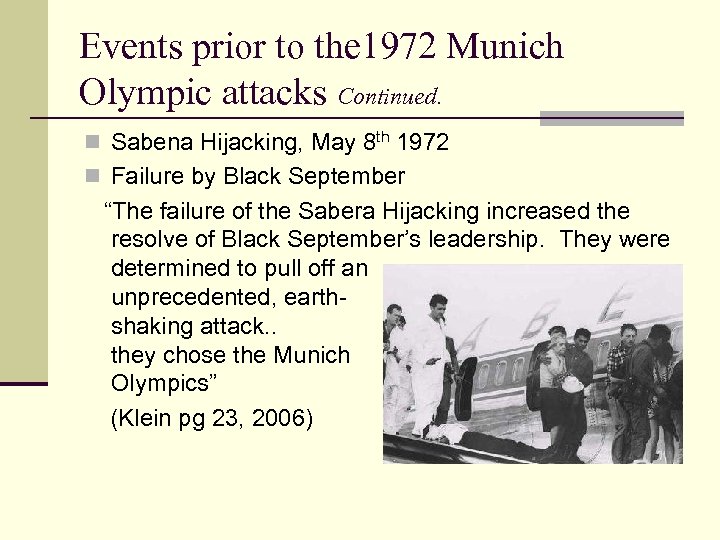 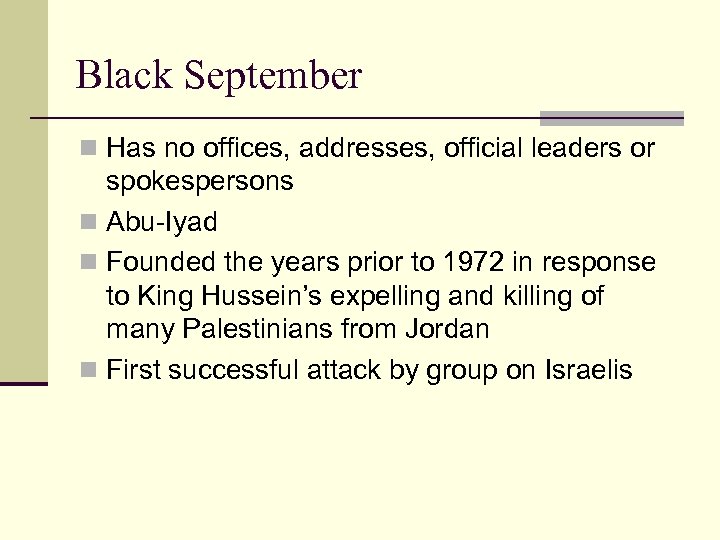 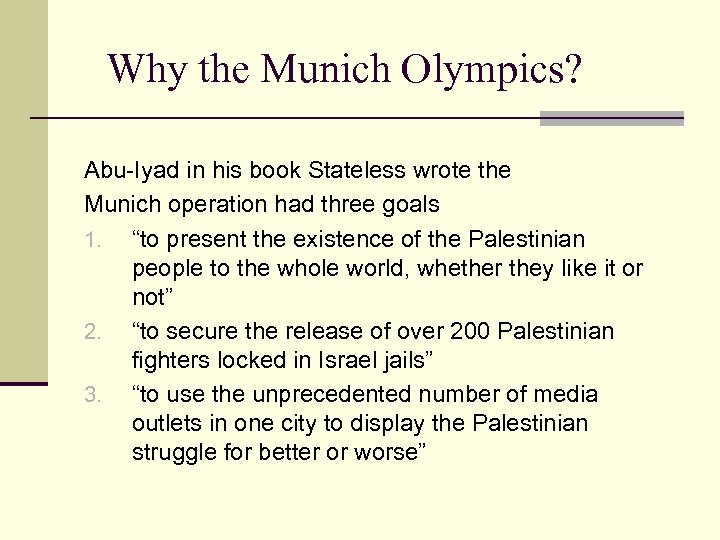 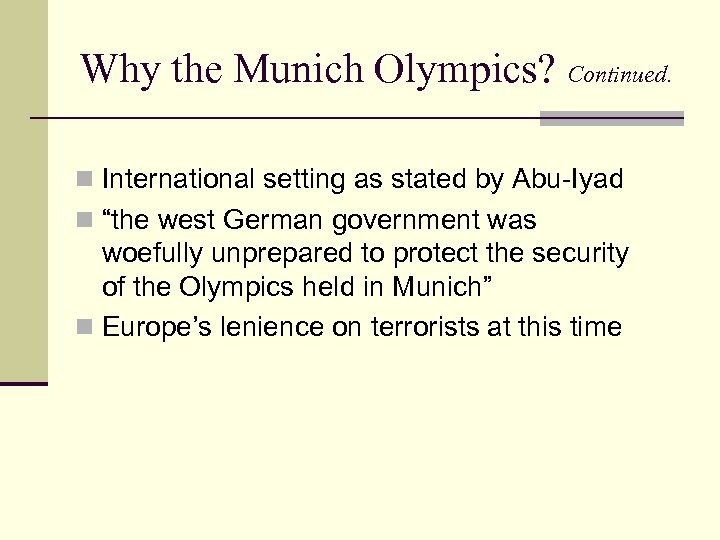 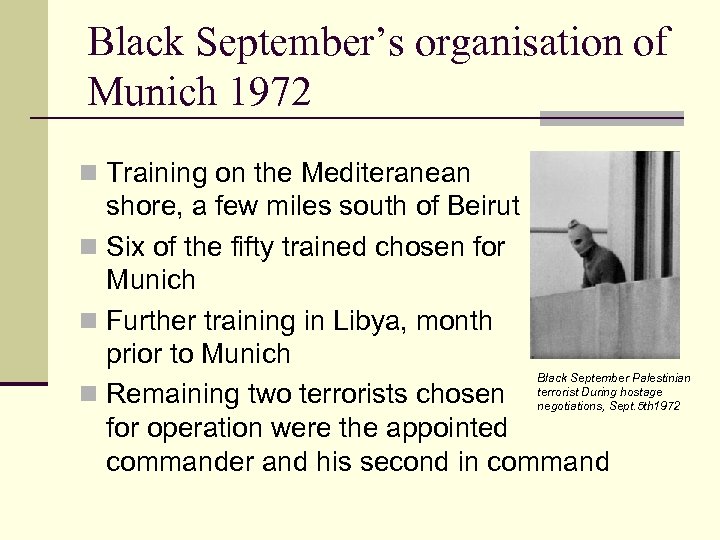 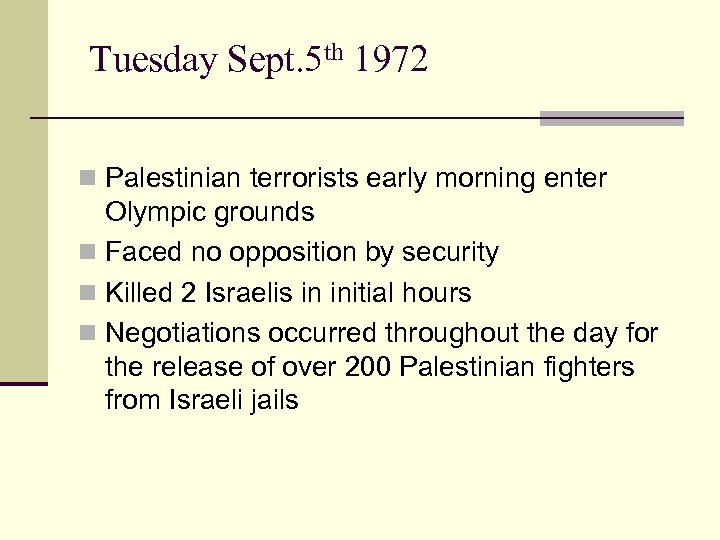 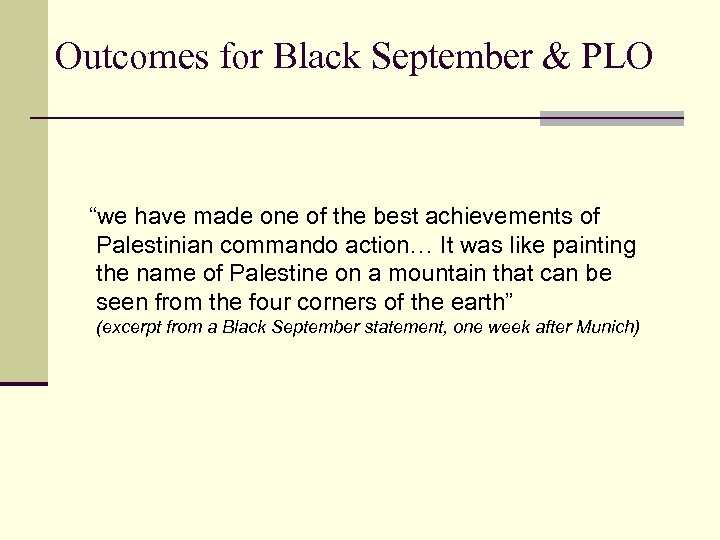 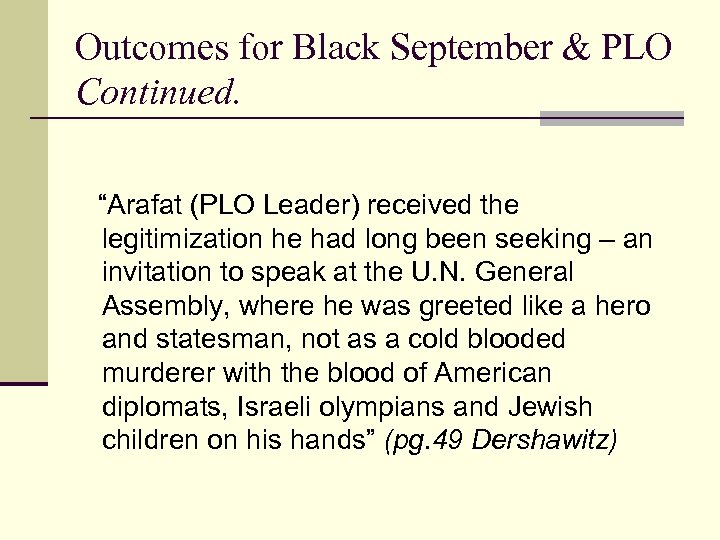 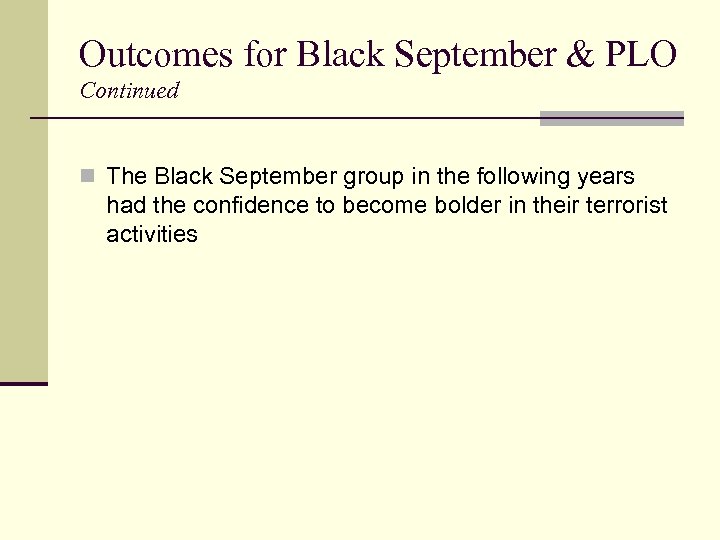 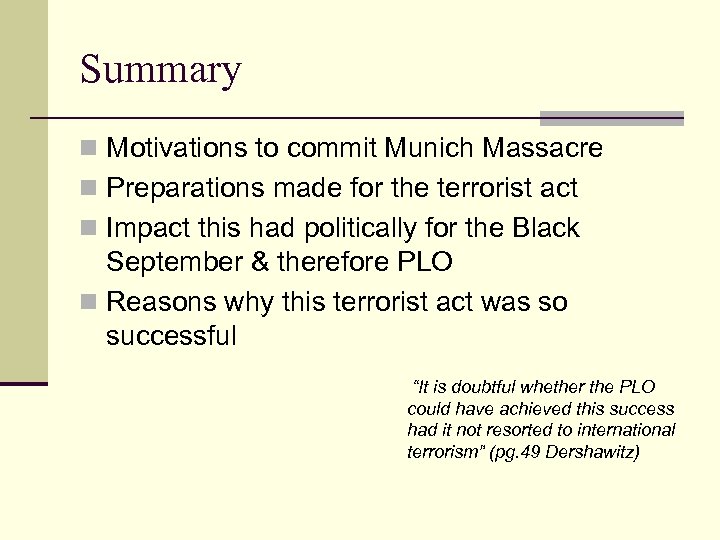 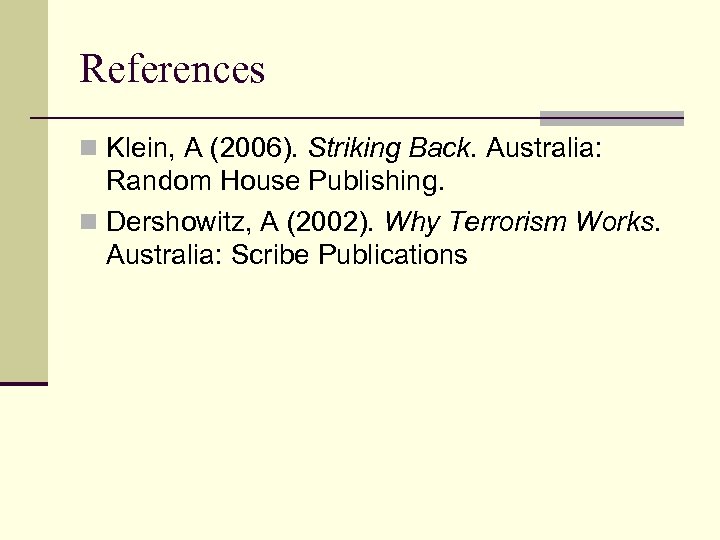 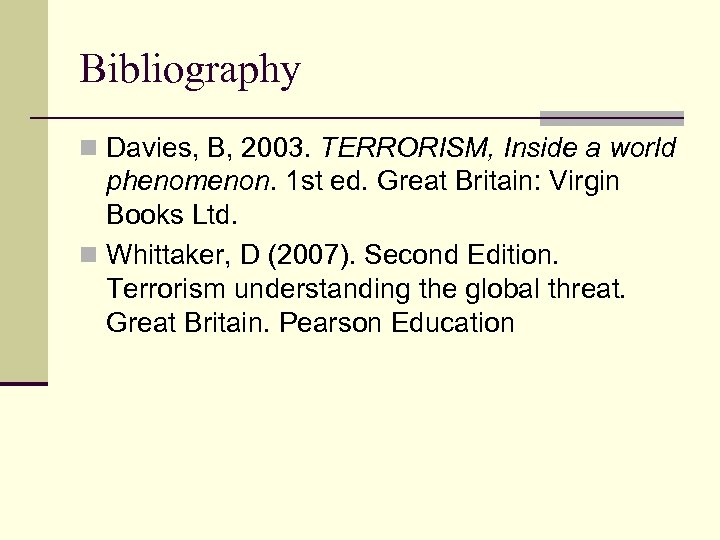 Massacre of Israeli Olympic team in Munich, Sept 5, 1972. What were the motivations and means of Black September with the Munich terrorist act

Events prior to the 1972 Munich Olympic attacks n Palestinian groups failure to execute attacks against Israel in West bank or Gaza n Success of attacks outside of the middle east ie. Europe n Palestinian attacks during 1972 before the Munich Olympics n This influenced Palestinian operations to become bolder, more sophisticated and theatrical (Klein pg. 47 2006)

Events prior to the 1972 Munich Olympic attacks Continued. n Sabena Hijacking, May 8 th 1972 n Failure by Black September “The failure of the Sabera Hijacking increased the resolve of Black September’s leadership. They were determined to pull off an unprecedented, earthshaking attack. . they chose the Munich Olympics” (Klein pg 23, 2006)

Black September n Has no offices, addresses, official leaders or spokespersons n Abu-Iyad n Founded the years prior to 1972 in response to King Hussein’s expelling and killing of many Palestinians from Jordan n First successful attack by group on Israelis

Why the Munich Olympics? Abu-Iyad in his book Stateless wrote the Munich operation had three goals 1. “to present the existence of the Palestinian people to the whole world, whether they like it or not” 2. “to secure the release of over 200 Palestinian fighters locked in Israel jails” 3. “to use the unprecedented number of media outlets in one city to display the Palestinian struggle for better or worse”

Why the Munich Olympics? Continued. n International setting as stated by Abu-Iyad n “the west German government was woefully unprepared to protect the security of the Olympics held in Munich” n Europe’s lenience on terrorists at this time

Black September’s organisation of Munich 1972 n Training on the Mediteranean shore, a few miles south of Beirut n Six of the fifty trained chosen for Munich n Further training in Libya, month prior to Munich Black September Palestinian n Remaining two terrorists chosen terrorist During hostage negotiations, Sept. 5 th 1972 for operation were the appointed commander and his second in command

Outcomes for Black September & PLO “we have made one of the best achievements of Palestinian commando action… It was like painting the name of Palestine on a mountain that can be seen from the four corners of the earth” (excerpt from a Black September statement, one week after Munich)

Outcomes for Black September & PLO Continued. “Arafat (PLO Leader) received the legitimization he had long been seeking – an invitation to speak at the U. N. General Assembly, where he was greeted like a hero and statesman, not as a cold blooded murderer with the blood of American diplomats, Israeli olympians and Jewish children on his hands” (pg. 49 Dershawitz)

Summary n Motivations to commit Munich Massacre n Preparations made for the terrorist act n Impact this had politically for the Black September & therefore PLO n Reasons why this terrorist act was so successful “It is doubtful whether the PLO could have achieved this success had it not resorted to international terrorism” (pg. 49 Dershawitz)

“ The History of the Olympic Games” Presentation

Team Leading What is a Team Anyway?