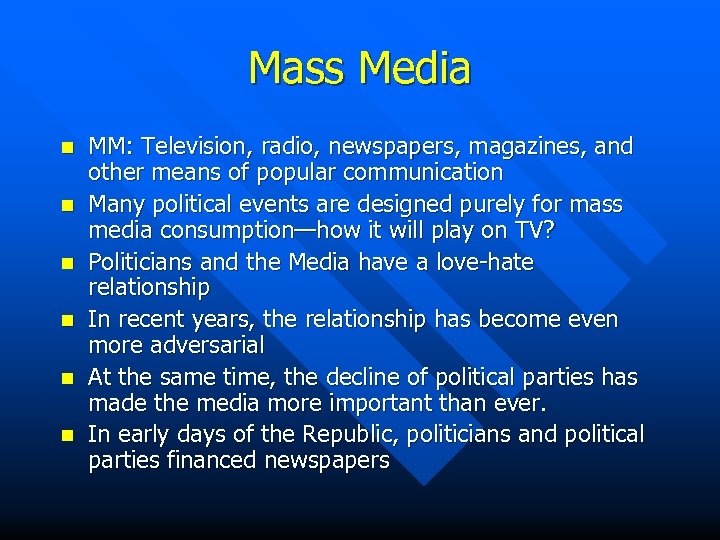 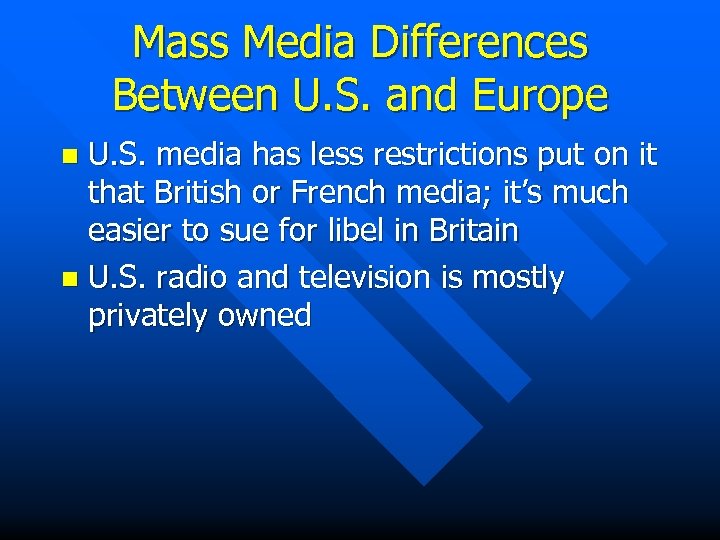 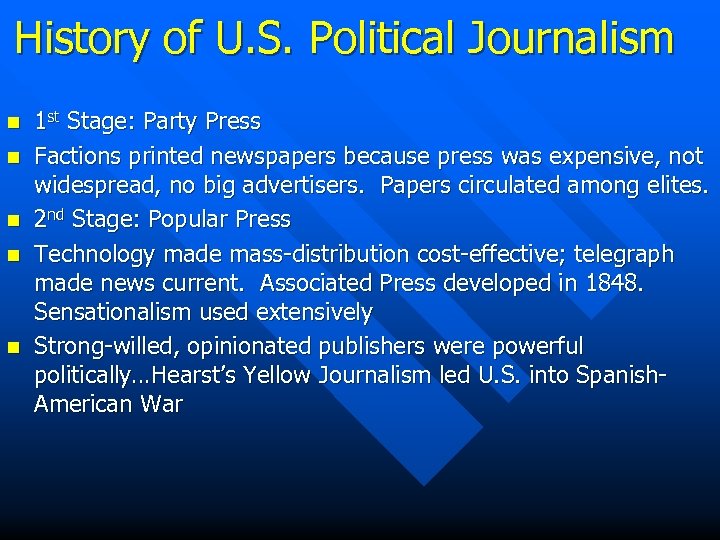 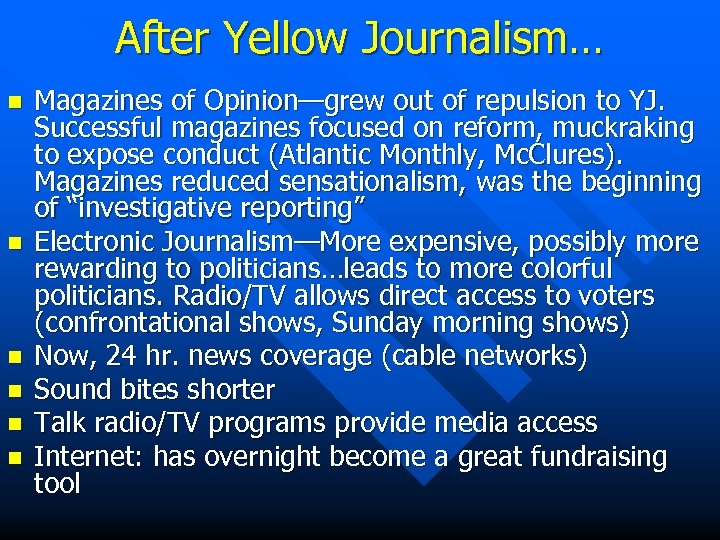 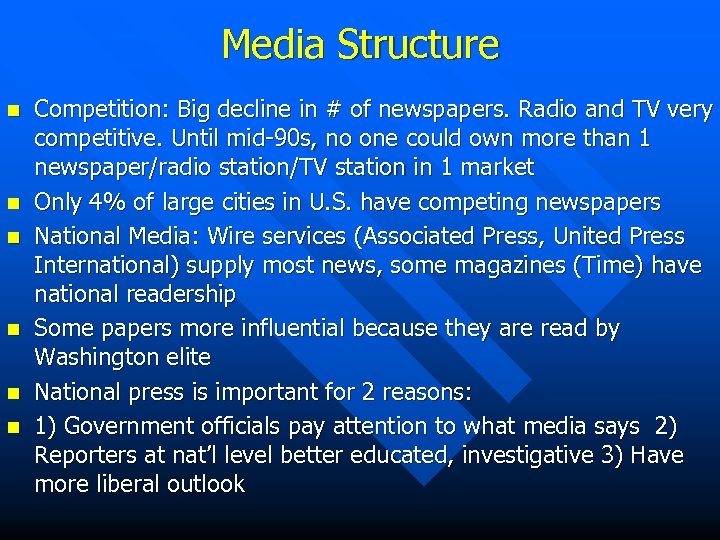 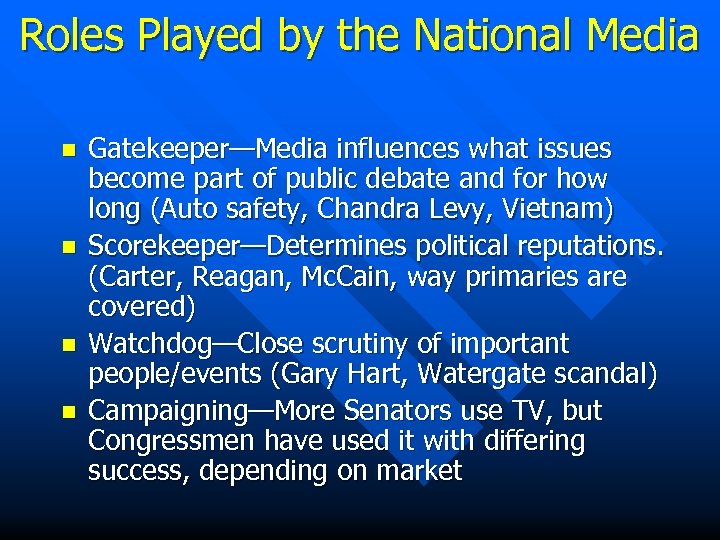 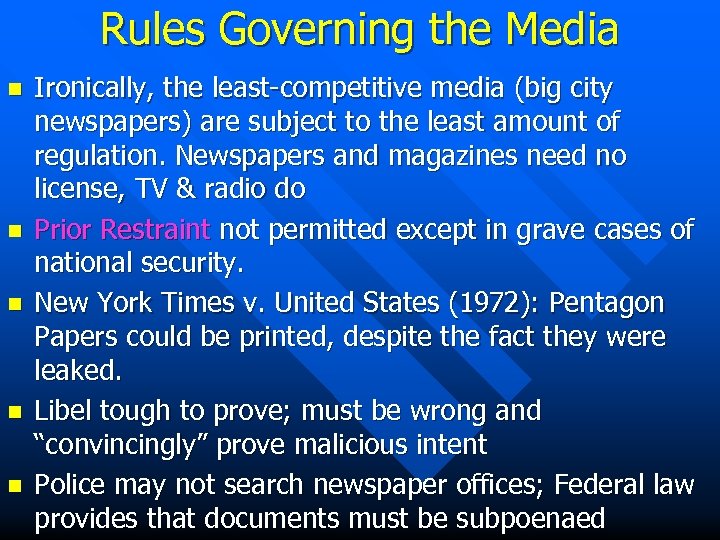 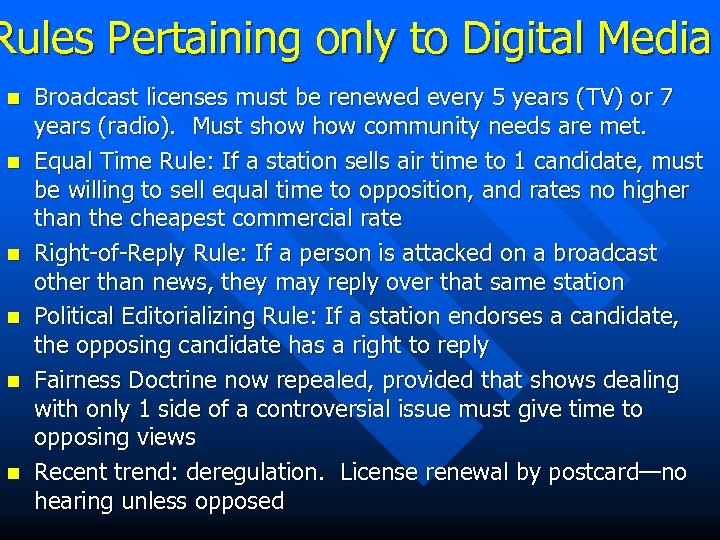 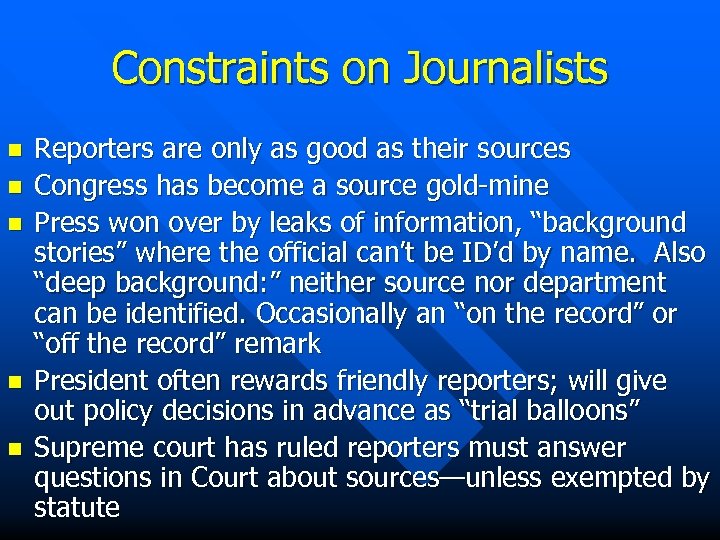 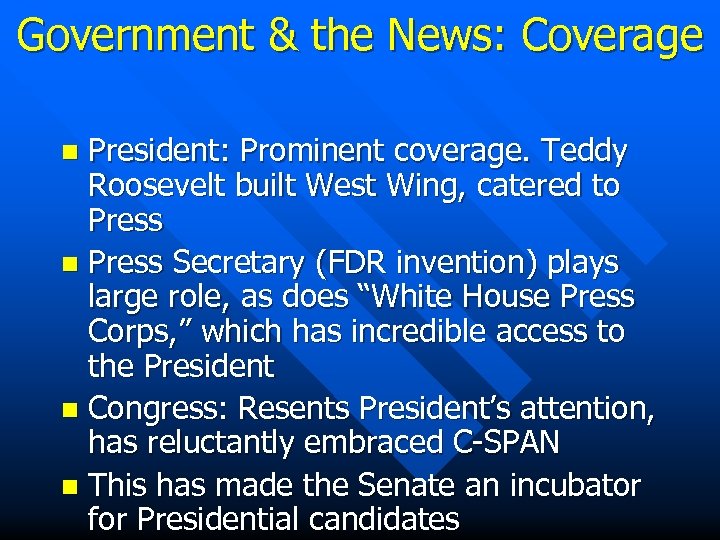 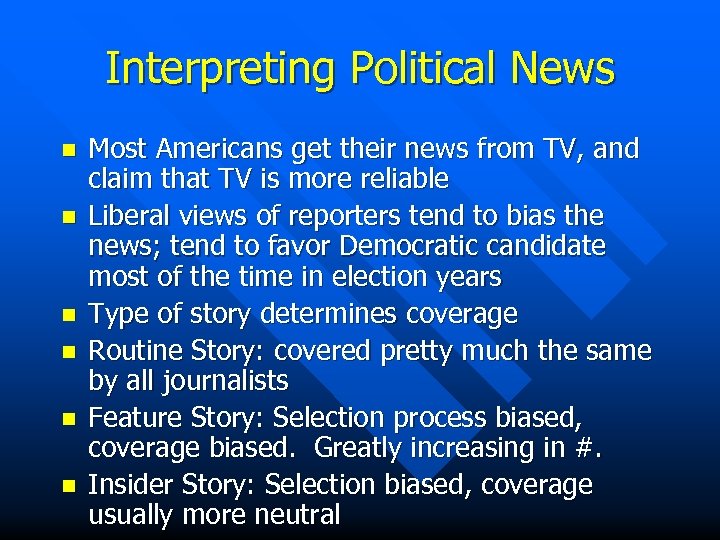 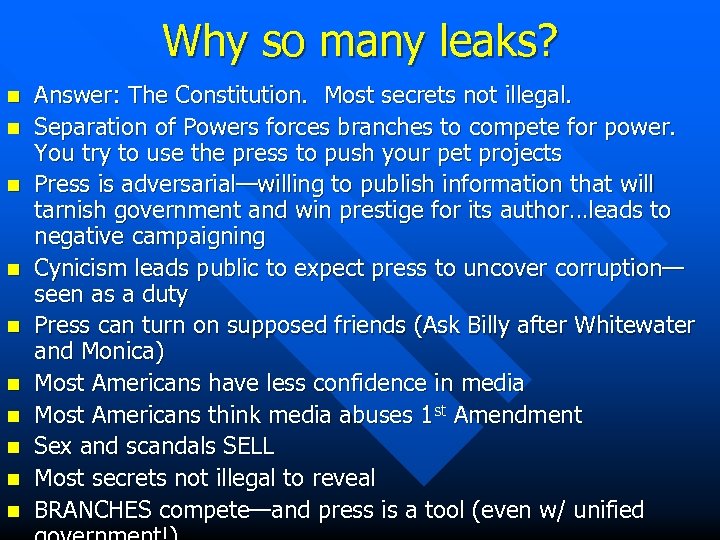 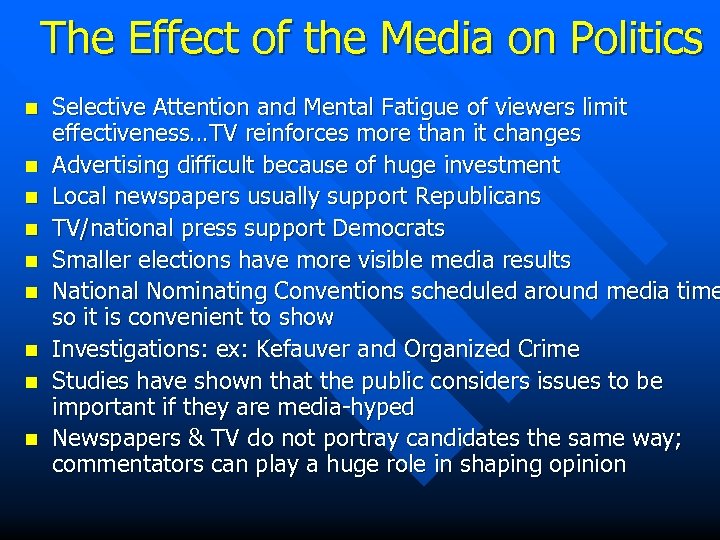 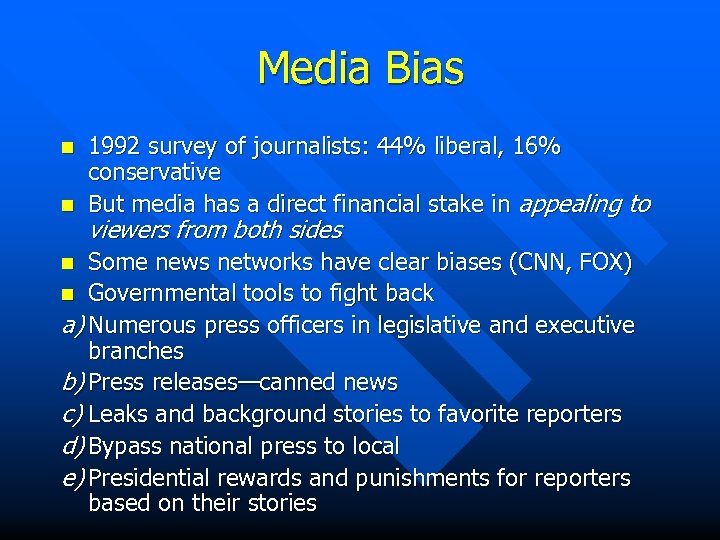 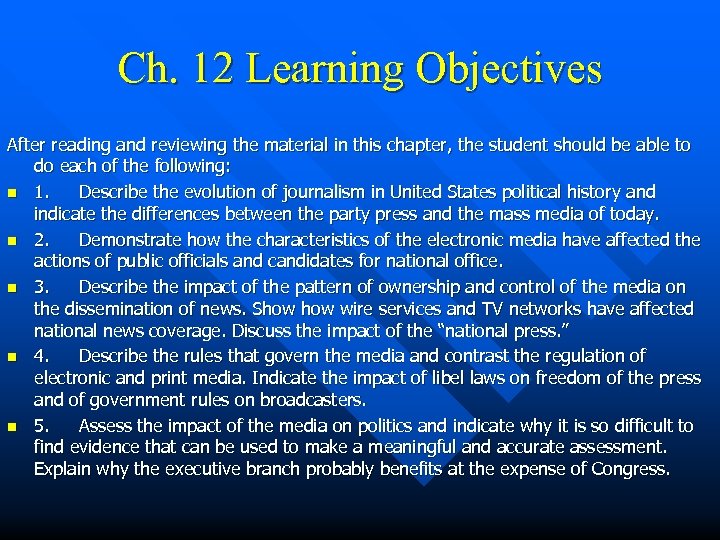 Mass Media n n n MM: Television, radio, newspapers, magazines, and other means of popular communication Many political events are designed purely for mass media consumption—how it will play on TV? Politicians and the Media have a love-hate relationship In recent years, the relationship has become even more adversarial At the same time, the decline of political parties has made the media more important than ever. In early days of the Republic, politicians and political parties financed newspapers

Mass Media Differences Between U. S. and Europe U. S. media has less restrictions put on it that British or French media; it’s much easier to sue for libel in Britain n U. S. radio and television is mostly privately owned n

Media Structure n n n Competition: Big decline in # of newspapers. Radio and TV very competitive. Until mid-90 s, no one could own more than 1 newspaper/radio station/TV station in 1 market Only 4% of large cities in U. S. have competing newspapers National Media: Wire services (Associated Press, United Press International) supply most news, some magazines (Time) have national readership Some papers more influential because they are read by Washington elite National press is important for 2 reasons: 1) Government officials pay attention to what media says 2) Reporters at nat’l level better educated, investigative 3) Have more liberal outlook

Rules Governing the Media n n n Ironically, the least-competitive media (big city newspapers) are subject to the least amount of regulation. Newspapers and magazines need no license, TV & radio do Prior Restraint not permitted except in grave cases of national security. New York Times v. United States (1972): Pentagon Papers could be printed, despite the fact they were leaked. Libel tough to prove; must be wrong and “convincingly” prove malicious intent Police may not search newspaper offices; Federal law provides that documents must be subpoenaed

Rules Pertaining only to Digital Media n n n Broadcast licenses must be renewed every 5 years (TV) or 7 years (radio). Must show community needs are met. Equal Time Rule: If a station sells air time to 1 candidate, must be willing to sell equal time to opposition, and rates no higher than the cheapest commercial rate Right-of-Reply Rule: If a person is attacked on a broadcast other than news, they may reply over that same station Political Editorializing Rule: If a station endorses a candidate, the opposing candidate has a right to reply Fairness Doctrine now repealed, provided that shows dealing with only 1 side of a controversial issue must give time to opposing views Recent trend: deregulation. License renewal by postcard—no hearing unless opposed

Constraints on Journalists n n n Reporters are only as good as their sources Congress has become a source gold-mine Press won over by leaks of information, “background stories” where the official can’t be ID’d by name. Also “deep background: ” neither source nor department can be identified. Occasionally an “on the record” or “off the record” remark President often rewards friendly reporters; will give out policy decisions in advance as “trial balloons” Supreme court has ruled reporters must answer questions in Court about sources—unless exempted by statute

Why so many leaks? n n n n n Answer: The Constitution. Most secrets not illegal. Separation of Powers forces branches to compete for power. You try to use the press to push your pet projects Press is adversarial—willing to publish information that will tarnish government and win prestige for its author…leads to negative campaigning Cynicism leads public to expect press to uncover corruption— seen as a duty Press can turn on supposed friends (Ask Billy after Whitewater and Monica) Most Americans have less confidence in media Most Americans think media abuses 1 st Amendment Sex and scandals SELL Most secrets not illegal to reveal BRANCHES compete—and press is a tool (even w/ unified

The Effect of the Media on Politics n n n n n Selective Attention and Mental Fatigue of viewers limit effectiveness…TV reinforces more than it changes Advertising difficult because of huge investment Local newspapers usually support Republicans TV/national press support Democrats Smaller elections have more visible media results National Nominating Conventions scheduled around media time so it is convenient to show Investigations: ex: Kefauver and Organized Crime Studies have shown that the public considers issues to be important if they are media-hyped Newspapers & TV do not portray candidates the same way; commentators can play a huge role in shaping opinion

Media Bias n n 1992 survey of journalists: 44% liberal, 16% conservative But media has a direct financial stake in appealing to viewers from both sides Some news networks have clear biases (CNN, FOX) n Governmental tools to fight back a) Numerous press officers in legislative and executive branches b) Press releases—canned news c) Leaks and background stories to favorite reporters d) Bypass national press to local e) Presidential rewards and punishments for reporters based on their stories n

Ch. 12 Learning Objectives After reading and reviewing the material in this chapter, the student should be able to do each of the following: n 1. Describe the evolution of journalism in United States political history and indicate the differences between the party press and the mass media of today. n 2. Demonstrate how the characteristics of the electronic media have affected the actions of public officials and candidates for national office. n 3. Describe the impact of the pattern of ownership and control of the media on the dissemination of news. Show wire services and TV networks have affected national news coverage. Discuss the impact of the “national press. ” n 4. Describe the rules that govern the media and contrast the regulation of electronic and print media. Indicate the impact of libel laws on freedom of the press and of government rules on broadcasters. n 5. Assess the impact of the media on politics and indicate why it is so difficult to find evidence that can be used to make a meaningful and accurate assessment. Explain why the executive branch probably benefits at the expense of Congress.