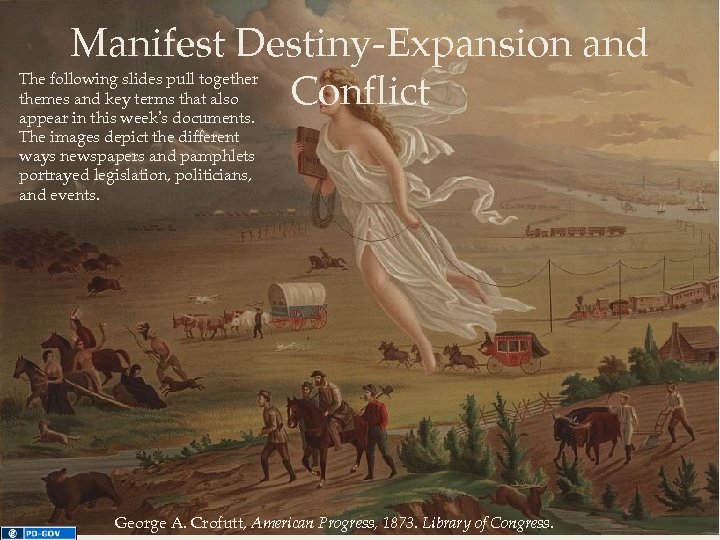 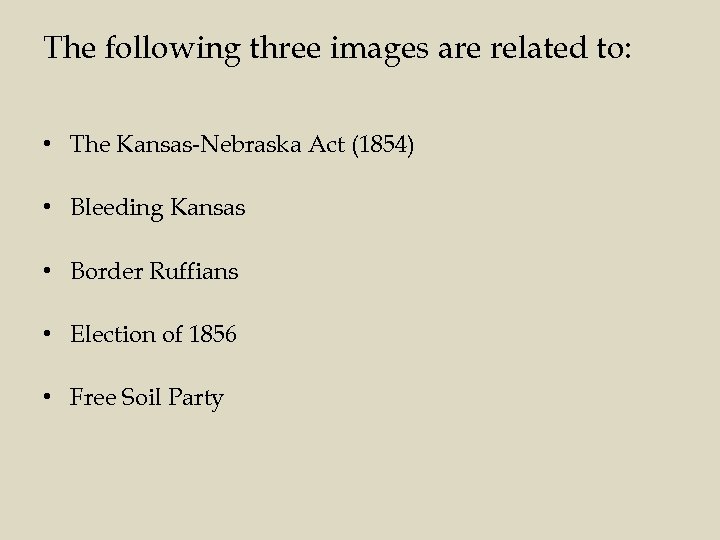 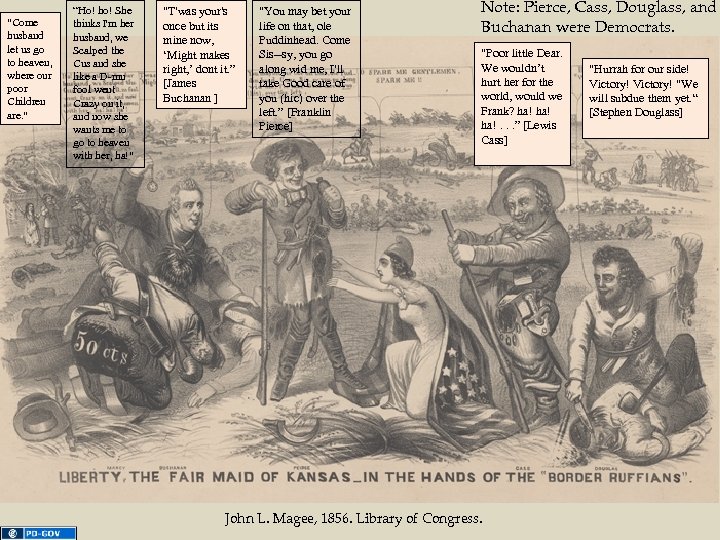 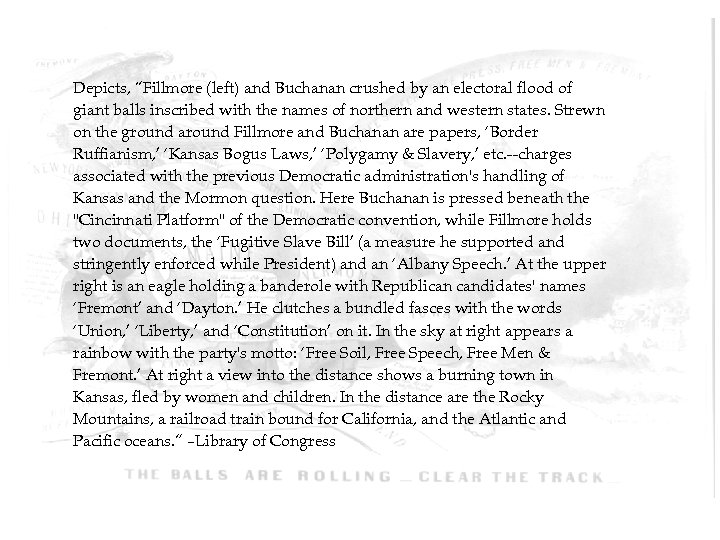 Manifest Destiny-Expansion and Conflict The following slides pull together themes and key terms that also appear in this week’s documents. The images depict the different ways newspapers and pamphlets portrayed legislation, politicians, and events. George A. Crofutt, American Progress, 1873. Library of Congress.

Union This group portrait emphasizes recent legislative efforts, notably the Compromise of 1850, to preserve the Union. “The figures pictured here are (front row, left to right): Winfield Scott, Lewis Cass, Henry Clay, John Calhoun [Calhoun died before the bill was actually passed], Daniel Webster, and (holding a shield) Millard Fillmore. Calhoun and Webster stand with their hands resting on the Constitution, a bust of George Washington between them. Cass holds a document "Protest [illegible] Treaty. " Scott, in uniform, grasps with his right hand a portfolio from which protrude papers and maps recalling his Mexican War victories. In the left background are (left to right): Speaker of the House Howell Cobb of Georgia, Virginia representative James Mc. Dowell, Thomas Hart Benton of Missouri, and former secretary of state John M. Clayton of Delaware. In the second row at right: Ohio senator Thomas Corwin, James Buchanan, Stephen A. Douglas, attorney general John J. Crittenden, and senators Sam Houston of Texas and Henry Foote of Mississippi. Behind, beneath a genius carrying a laurel branch and liberty staff, are senators Willie P. Mangum of North Carolina and W. R. King of Alabama. At far right, below an eagle, are Daniel S. Dickinson of New York, Supreme Court justice John Mc. Lean of Ohio, and senators John Bell of Tennessee and John C. Fremont of California. In the background curtains are drawn to reveal a gleaming temple with a colonnade surmounted by a large ball, a figure holding a liberty cap, and a phoenix. ” –Library of Congress

"Come husband let us go to heaven, where our poor Children are. " “Ho! ho! She thinks I'm her husband, we Scalped the Cus and she like a D-mn fool went Crazy on it, and now she wants me to go to heaven with her, ha!" "T'was your's once but its mine now, ‘Might makes right, ’ dont it. ” [James Buchanan ] "You may bet your life on that, ole Puddinhead. Come Sis--sy, you go along wid me, I'll take Good care of you (hic) over the left. ” [Franklin Pierce] Note: Pierce, Cass, Douglass, and Buchanan were Democrats. "Poor little Dear. We wouldn’t hurt her for the world, would we Frank? ha! ha!. . . ” [Lewis Cass] John L. Magee, 1856. Library of Congress. "Hurrah for our side! Victory! "We will subdue them yet. “ [Stephen Douglass]

Depicts, “Fillmore (left) and Buchanan crushed by an electoral flood of giant balls inscribed with the names of northern and western states. Strewn on the ground around Fillmore and Buchanan are papers, ‘Border Ruffianism, ’ ‘Kansas Bogus Laws, ’ ‘Polygamy & Slavery, ’ etc. --charges associated with the previous Democratic administration's handling of Kansas and the Mormon question. Here Buchanan is pressed beneath the "Cincinnati Platform" of the Democratic convention, while Fillmore holds two documents, the ‘Fugitive Slave Bill’ (a measure he supported and stringently enforced while President) and an ‘Albany Speech. ’ At the upper right is an eagle holding a banderole with Republican candidates' names ‘Fremont’ and ‘Dayton. ’ He clutches a bundled fasces with the words ‘Union, ’ ‘Liberty, ’ and ‘Constitution’ on it. In the sky at right appears a rainbow with the party's motto: ‘Free Soil, Free Speech, Free Men & Fremont. ’ At right a view into the distance shows a burning town in Kansas, fled by women and children. In the distance are the Rocky Mountains, a railroad train bound for California, and the Atlantic and Pacific oceans. ” –Library of Congress

1 Neoplasms of the Nose and Paranasal Sinus