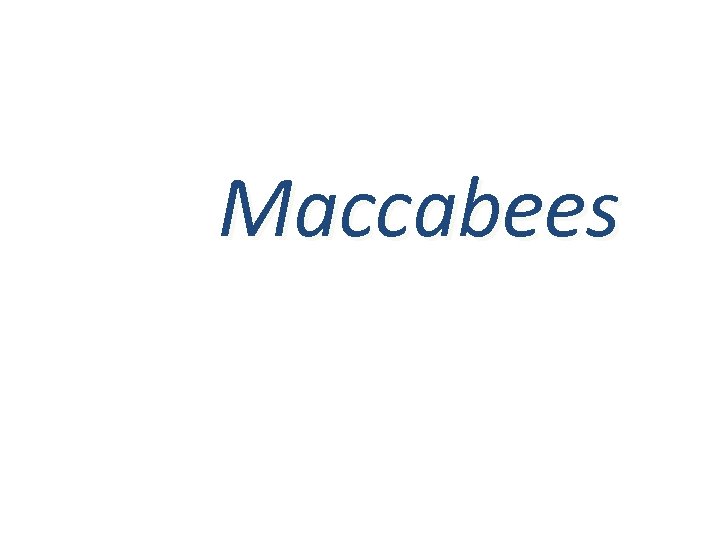 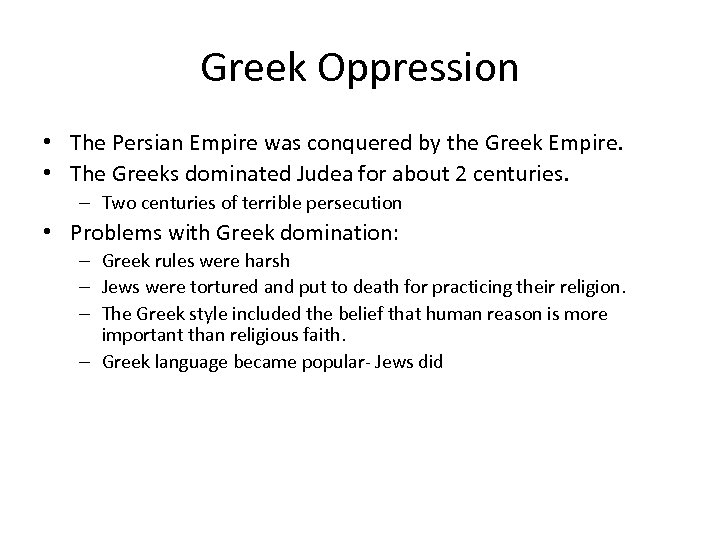 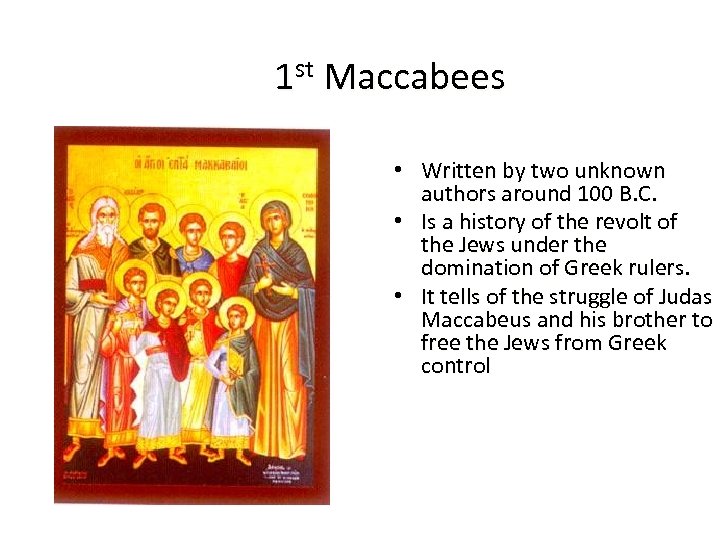 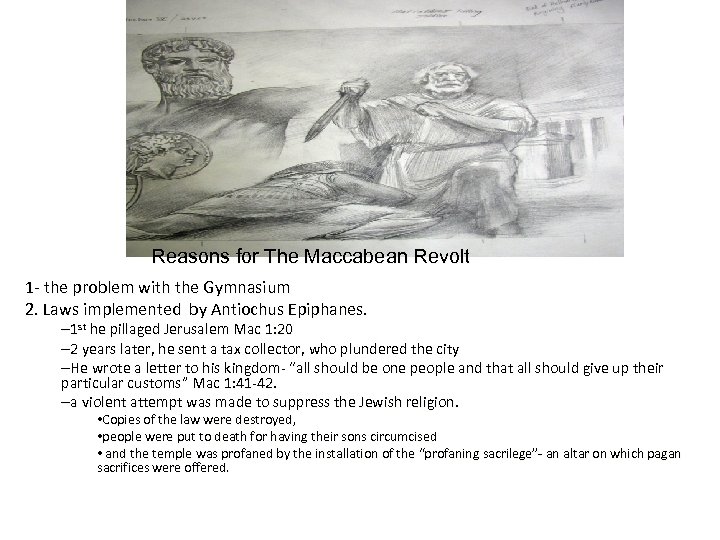 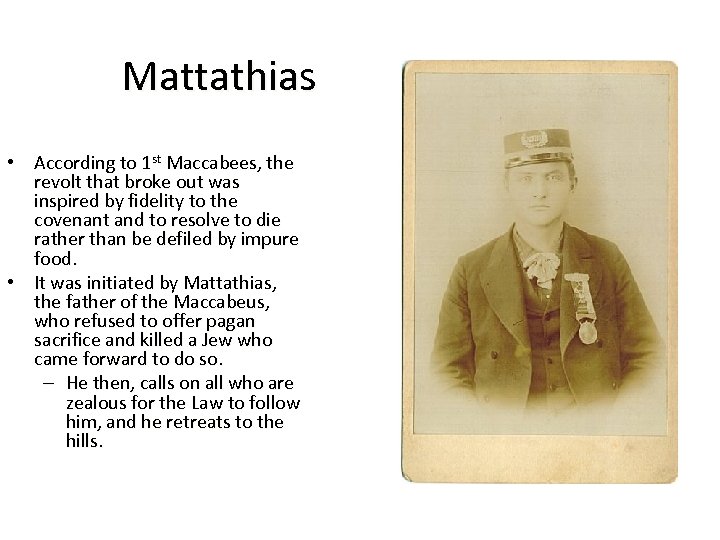 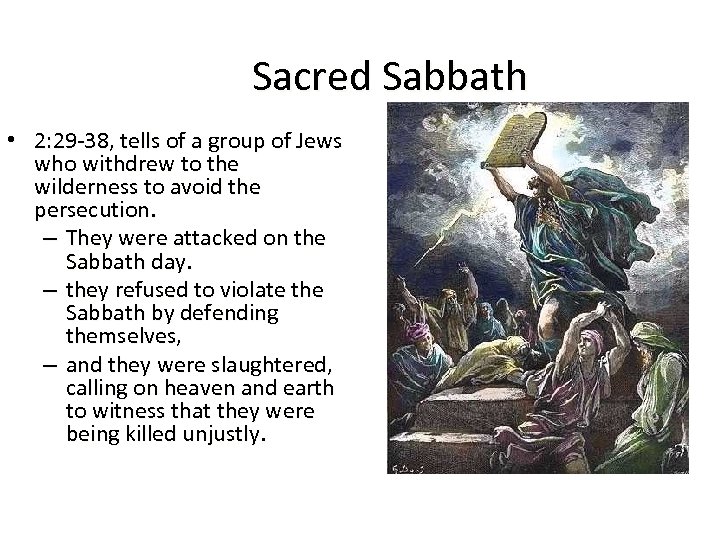 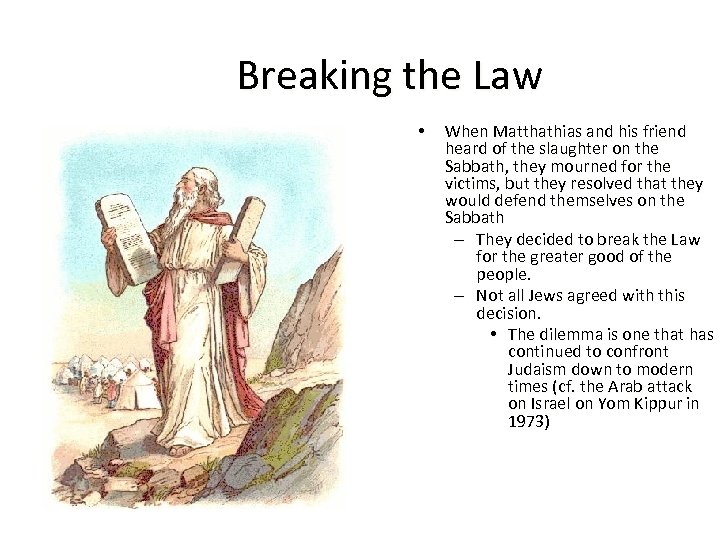 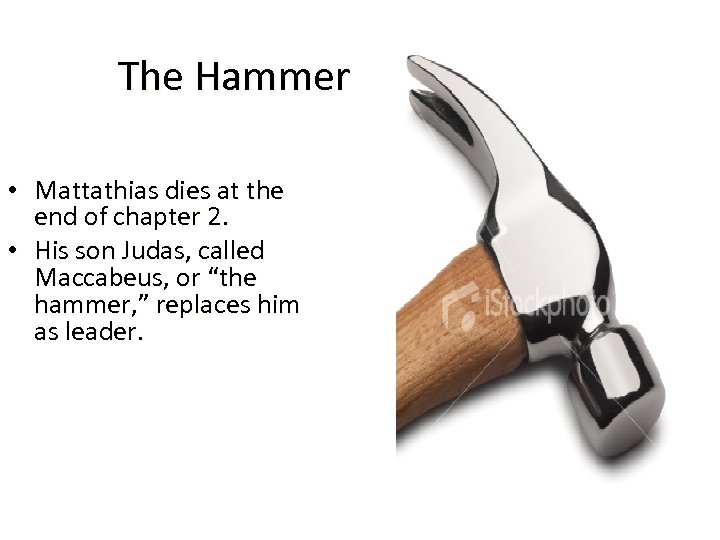 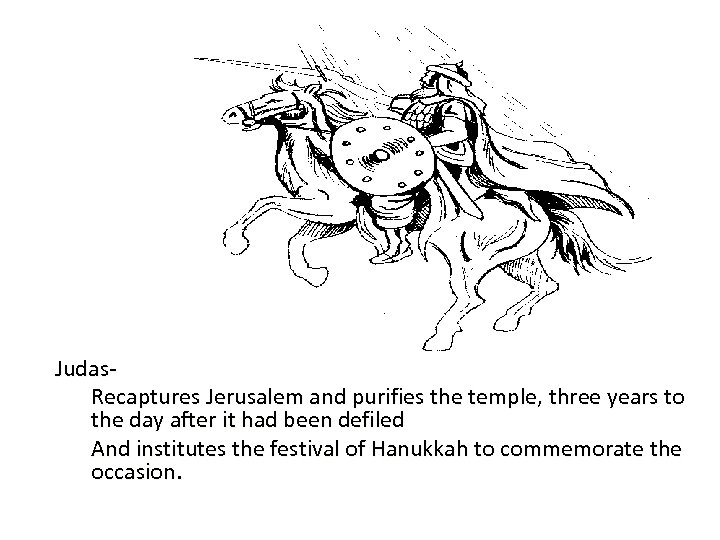 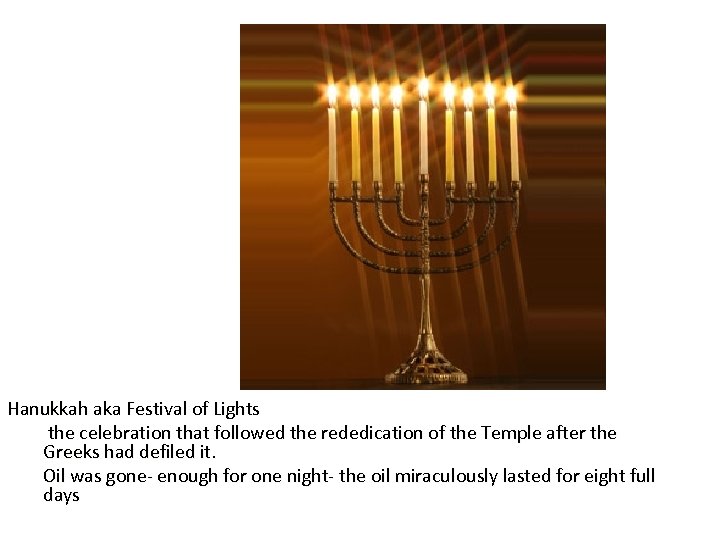 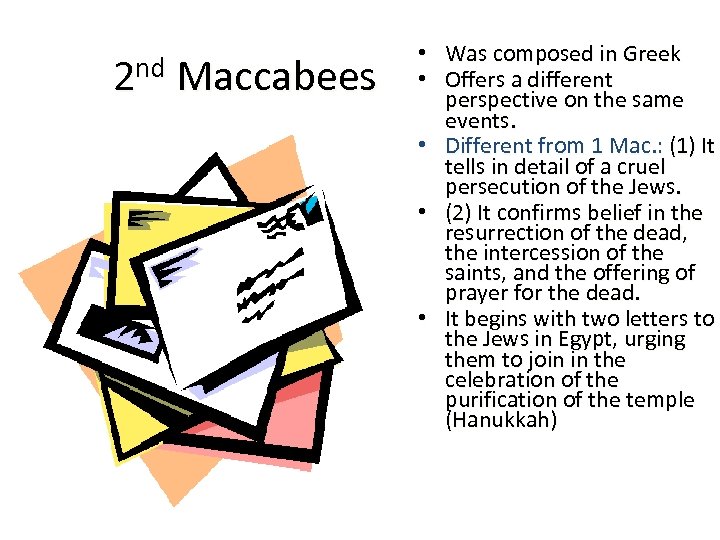 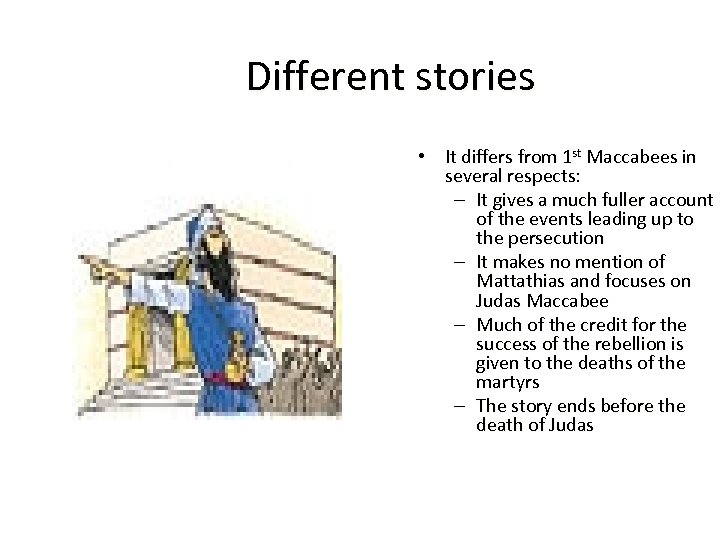 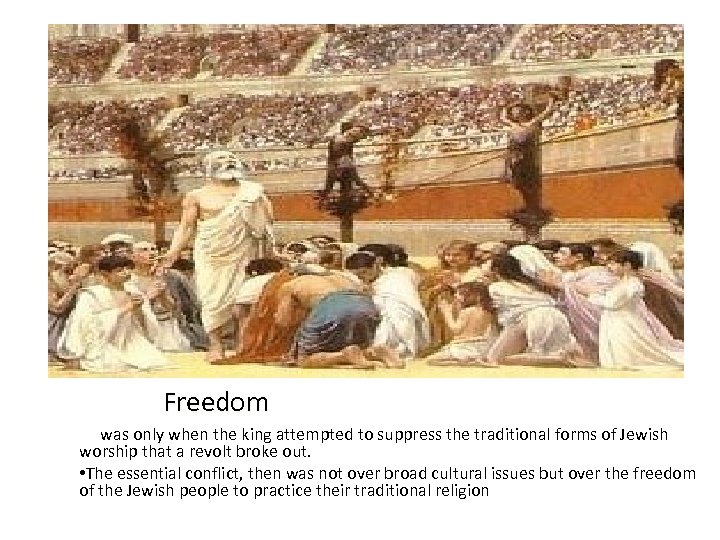 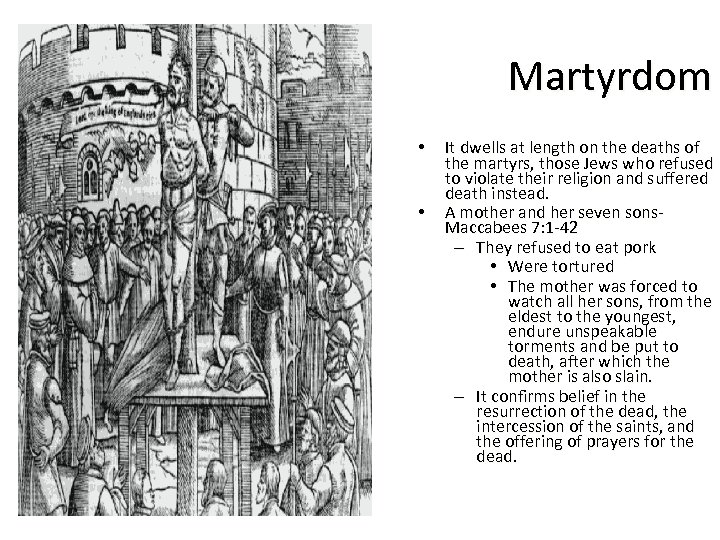 Greek Oppression • The Persian Empire was conquered by the Greek Empire. • The Greeks dominated Judea for about 2 centuries. – Two centuries of terrible persecution • Problems with Greek domination: – Greek rules were harsh – Jews were tortured and put to death for practicing their religion. – The Greek style included the belief that human reason is more important than religious faith. – Greek language became popular- Jews did not learn Hebrew anymore

1 st Maccabees • Written by two unknown authors around 100 B. C. • Is a history of the revolt of the Jews under the domination of Greek rulers. • It tells of the struggle of Judas Maccabeus and his brother to free the Jews from Greek control

Reasons for The Maccabean Revolt 1 - the problem with the Gymnasium 2. Laws implemented by Antiochus Epiphanes. – 1 st he pillaged Jerusalem Mac 1: 20 – 2 years later, he sent a tax collector, who plundered the city –He wrote a letter to his kingdom- “all should be one people and that all should give up their particular customs” Mac 1: 41 -42. –a violent attempt was made to suppress the Jewish religion. • Copies of the law were destroyed, • people were put to death for having their sons circumcised • and the temple was profaned by the installation of the “profaning sacrilege”- an altar on which pagan sacrifices were offered.

Mattathias • According to 1 st Maccabees, the revolt that broke out was inspired by fidelity to the covenant and to resolve to die rather than be defiled by impure food. • It was initiated by Mattathias, the father of the Maccabeus, who refused to offer pagan sacrifice and killed a Jew who came forward to do so. – He then, calls on all who are zealous for the Law to follow him, and he retreats to the hills.

Sacred Sabbath • 2: 29 -38, tells of a group of Jews who withdrew to the wilderness to avoid the persecution. – They were attacked on the Sabbath day. – they refused to violate the Sabbath by defending themselves, – and they were slaughtered, calling on heaven and earth to witness that they were being killed unjustly.

Breaking the Law • When Matthathias and his friend heard of the slaughter on the Sabbath, they mourned for the victims, but they resolved that they would defend themselves on the Sabbath – They decided to break the Law for the greater good of the people. – Not all Jews agreed with this decision. • The dilemma is one that has continued to confront Judaism down to modern times (cf. the Arab attack on Israel on Yom Kippur in 1973)

The Hammer • Mattathias dies at the end of chapter 2. • His son Judas, called Maccabeus, or “the hammer, ” replaces him as leader.

Judas. Recaptures Jerusalem and purifies the temple, three years to the day after it had been defiled And institutes the festival of Hanukkah to commemorate the occasion.

Hanukkah aka Festival of Lights the celebration that followed the rededication of the Temple after the Greeks had defiled it. Oil was gone- enough for one night- the oil miraculously lasted for eight full days

2 nd Maccabees • Was composed in Greek • Offers a different perspective on the same events. • Different from 1 Mac. : (1) It tells in detail of a cruel persecution of the Jews. • (2) It confirms belief in the resurrection of the dead, the intercession of the saints, and the offering of prayer for the dead. • It begins with two letters to the Jews in Egypt, urging them to join in the celebration of the purification of the temple (Hanukkah)

Different stories • It differs from 1 st Maccabees in several respects: – It gives a much fuller account of the events leading up to the persecution – It makes no mention of Mattathias and focuses on Judas Maccabee – Much of the credit for the success of the rebellion is given to the deaths of the martyrs – The story ends before the death of Judas

Freedom • It was only when the king attempted to suppress the traditional forms of Jewish worship that a revolt broke out. • The essential conflict, then was not over broad cultural issues but over the freedom of the Jewish people to practice their traditional religion as they saw fit.

Martyrdom • • It dwells at length on the deaths of the martyrs, those Jews who refused to violate their religion and suffered death instead. A mother and her seven sons. Maccabees 7: 1 -42 – They refused to eat pork • Were tortured • The mother was forced to watch all her sons, from the eldest to the youngest, endure unspeakable torments and be put to death, after which the mother is also slain. – It confirms belief in the resurrection of the dead, the intercession of the saints, and the offering of prayers for the dead.

Презентация chapter2 of the western civilization-2015-

Презентация chapter4 of the western civilization—