Macaques and Malaria This resource has been developed 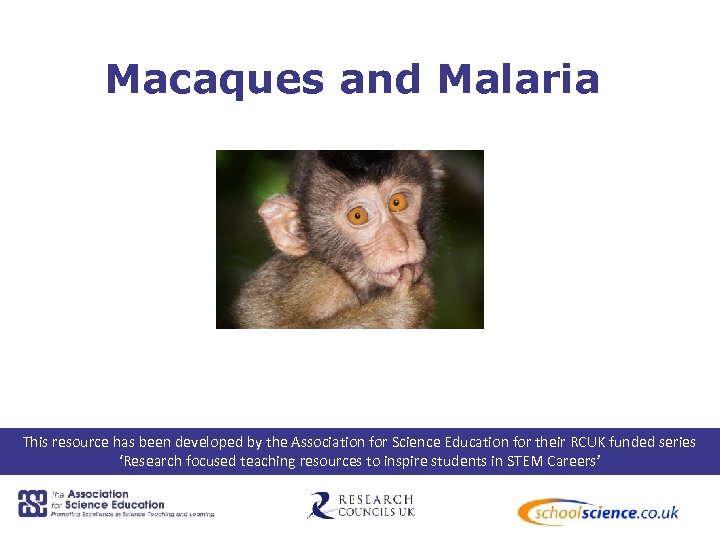 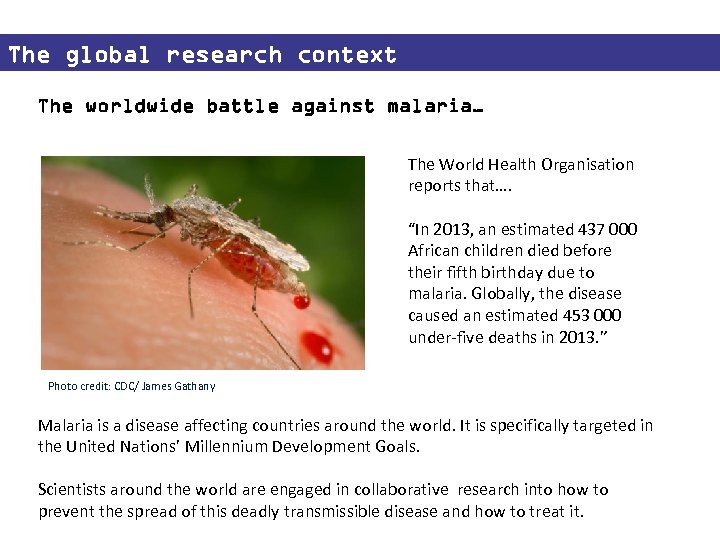 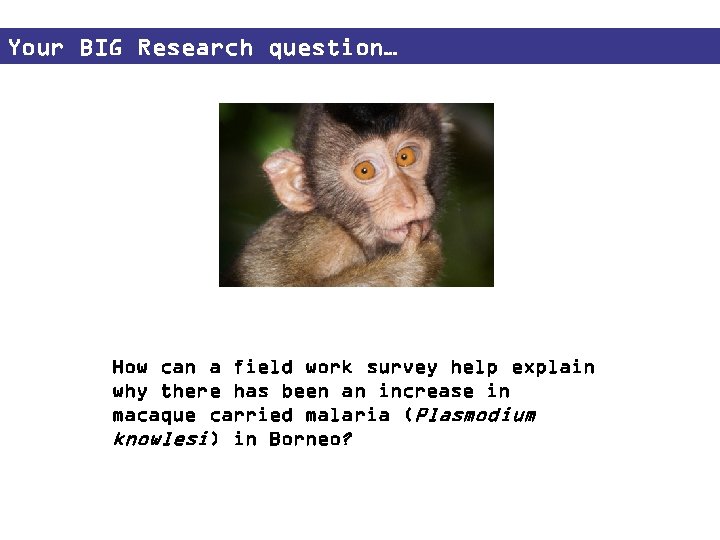 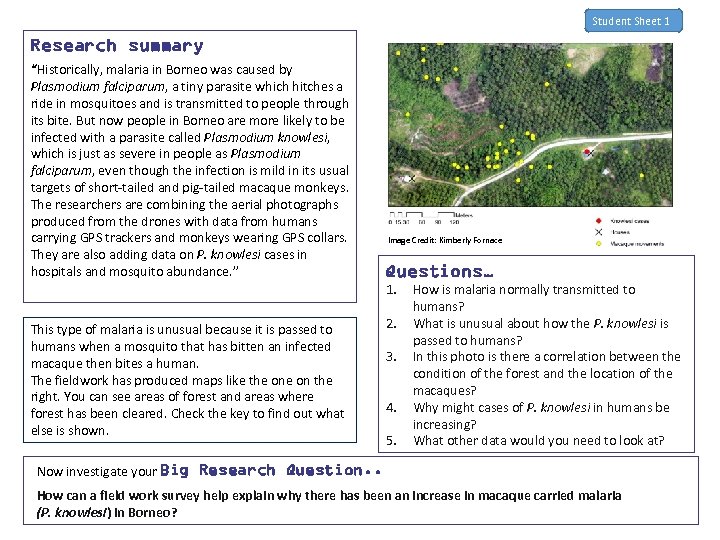 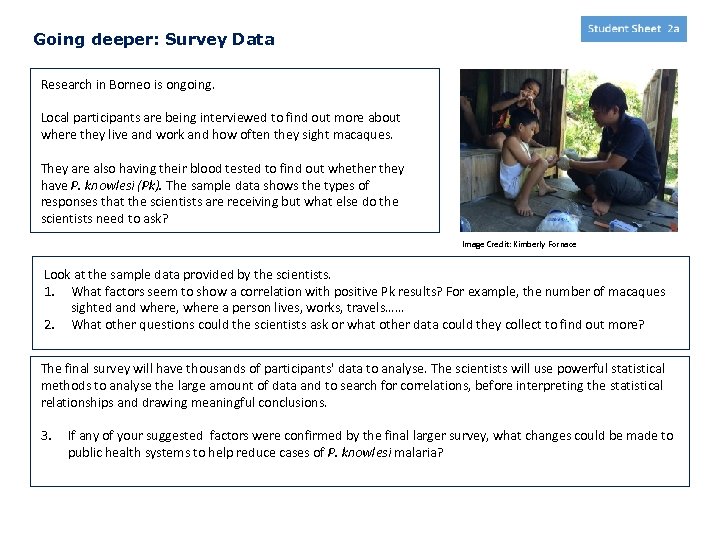 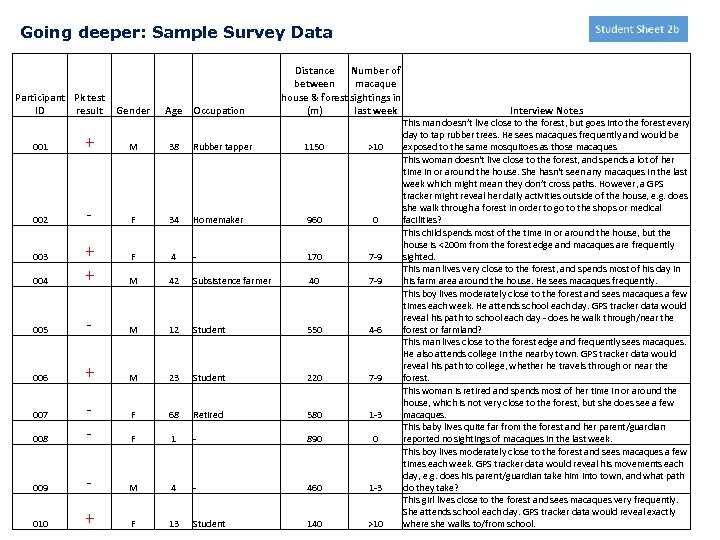 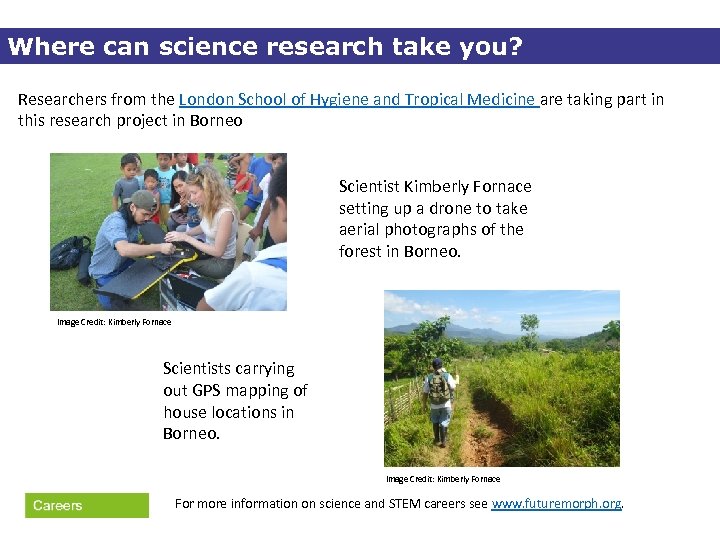 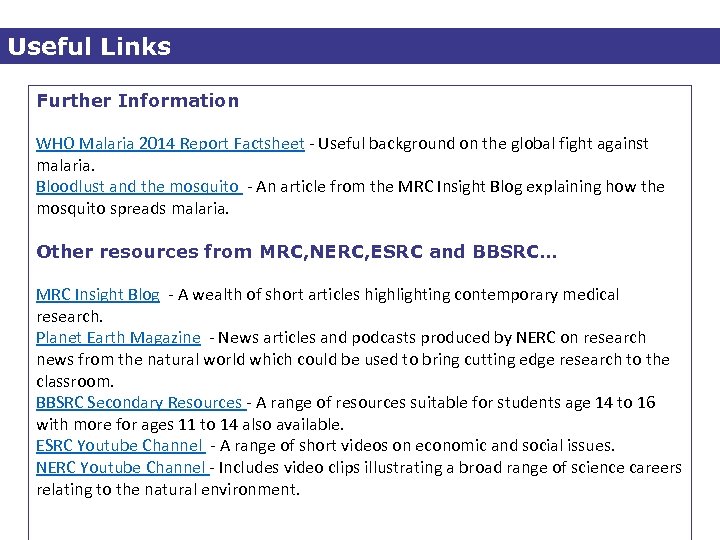 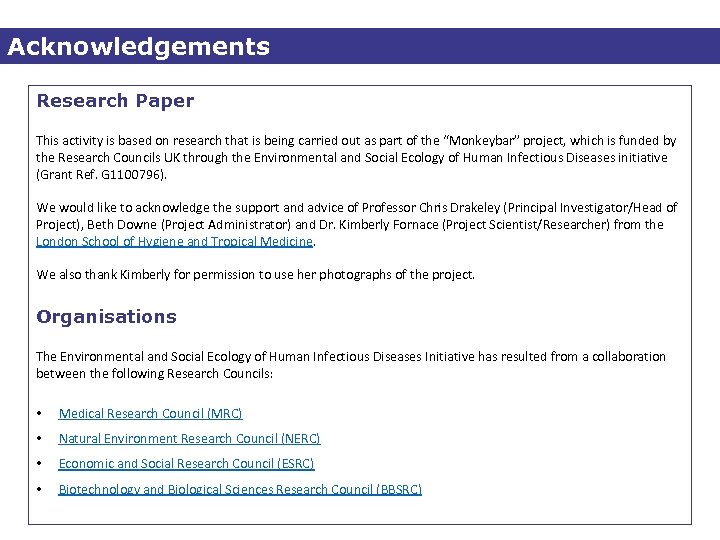 Скачать презентацию Macaques and Malaria This resource has been developed

The global research context The worldwide battle against malaria… The World Health Organisation reports that…. “In 2013, an estimated 437 000 African children died before their fifth birthday due to malaria. Globally, the disease caused an estimated 453 000 under-five deaths in 2013. ” Photo credit: CDC/ James Gathany Malaria is a disease affecting countries around the world. It is specifically targeted in the United Nations’ Millennium Development Goals. Scientists around the world are engaged in collaborative research into how to prevent the spread of this deadly transmissible disease and how to treat it.

Your BIG Research question… How can a field work survey help explain why there has been an increase in macaque carried malaria (Plasmodium knowlesi) in Borneo?

Student Sheet 1 Research summary “Historically, malaria in Borneo was caused by Plasmodium falciparum, a tiny parasite which hitches a ride in mosquitoes and is transmitted to people through its bite. But now people in Borneo are more likely to be infected with a parasite called Plasmodium knowlesi, which is just as severe in people as Plasmodium falciparum, even though the infection is mild in its usual targets of short-tailed and pig-tailed macaque monkeys. The researchers are combining the aerial photographs produced from the drones with data from humans carrying GPS trackers and monkeys wearing GPS collars. They are also adding data on P. knowlesi cases in hospitals and mosquito abundance. ” Image Credit: Kimberly Fornace Questions… 1. This type of malaria is unusual because it is passed to humans when a mosquito that has bitten an infected macaque then bites a human. The fieldwork has produced maps like the on the right. You can see areas of forest and areas where forest has been cleared. Check the key to find out what else is shown. 2. 3. 4. 5. How is malaria normally transmitted to humans? What is unusual about how the P. knowlesi is passed to humans? In this photo is there a correlation between the condition of the forest and the location of the macaques? Why might cases of P. knowlesi in humans be increasing? What other data would you need to look at? Now investigate your Big Research Question. . How can a field work survey help explain why there has been an increase in macaque carried malaria (P. knowlesi) in Borneo?

Going deeper: Survey Data Research in Borneo is ongoing. Local participants are being interviewed to find out more about where they live and work and how often they sight macaques. They are also having their blood tested to find out whether they have P. knowlesi (Pk). The sample data shows the types of responses that the scientists are receiving but what else do the scientists need to ask? Image Credit: Kimberly Fornace Look at the sample data provided by the scientists. 1. What factors seem to show a correlation with positive Pk results? For example, the number of macaques sighted and where, where a person lives, works, travels…… 2. What other questions could the scientists ask or what other data could they collect to find out more? The final survey will have thousands of participants' data to analyse. The scientists will use powerful statistical methods to analyse the large amount of data and to search for correlations, before interpreting the statistical relationships and drawing meaningful conclusions. 3. If any of your suggested factors were confirmed by the final larger survey, what changes could be made to public health systems to help reduce cases of P. knowlesi malaria?

Useful Links Further Information WHO Malaria 2014 Report Factsheet - Useful background on the global fight against malaria. Bloodlust and the mosquito - An article from the MRC Insight Blog explaining how the mosquito spreads malaria. Other resources from MRC, NERC, ESRC and BBSRC… MRC Insight Blog - A wealth of short articles highlighting contemporary medical research. Planet Earth Magazine - News articles and podcasts produced by NERC on research news from the natural world which could be used to bring cutting edge research to the classroom. BBSRC Secondary Resources - A range of resources suitable for students age 14 to 16 with more for ages 11 to 14 also available. ESRC Youtube Channel - A range of short videos on economic and social issues. NERC Youtube Channel - Includes video clips illustrating a broad range of science careers relating to the natural environment.