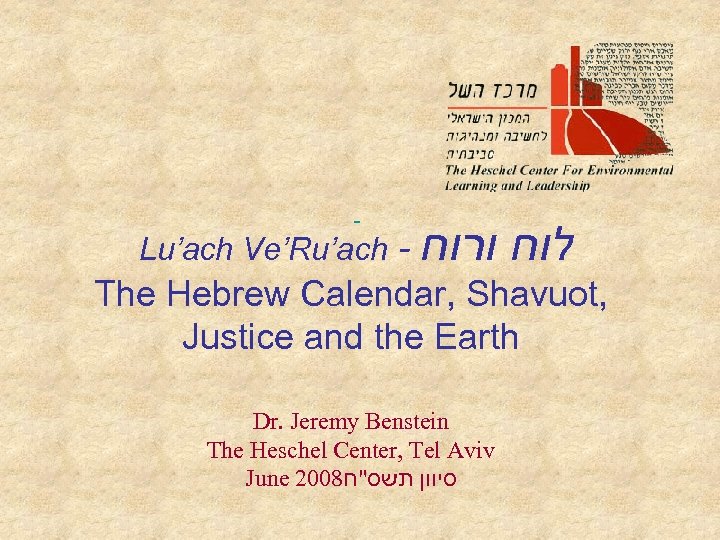 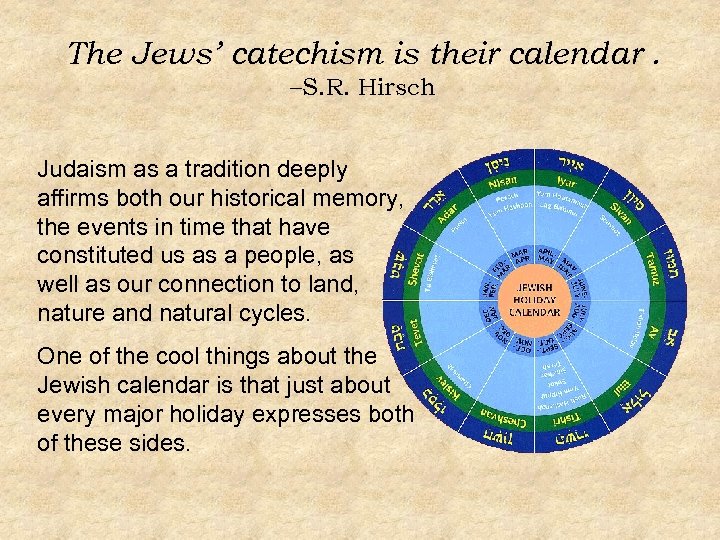 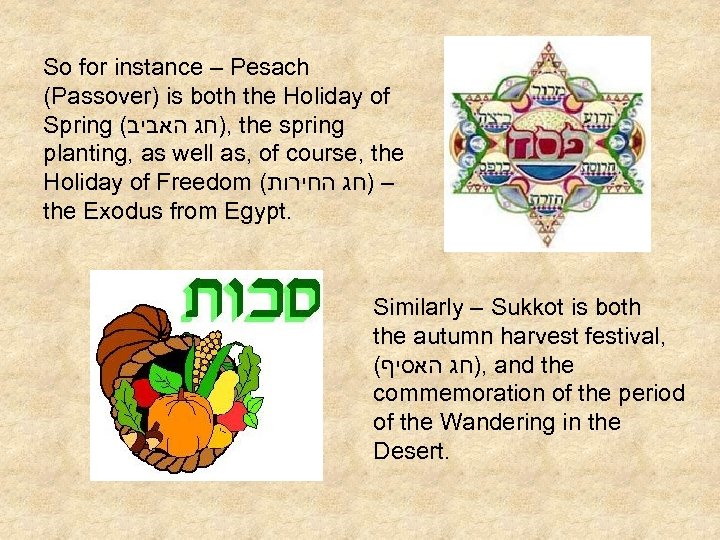 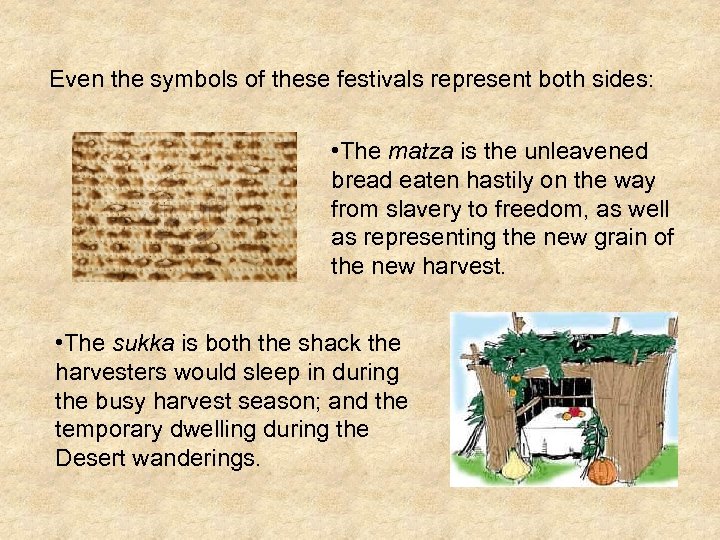 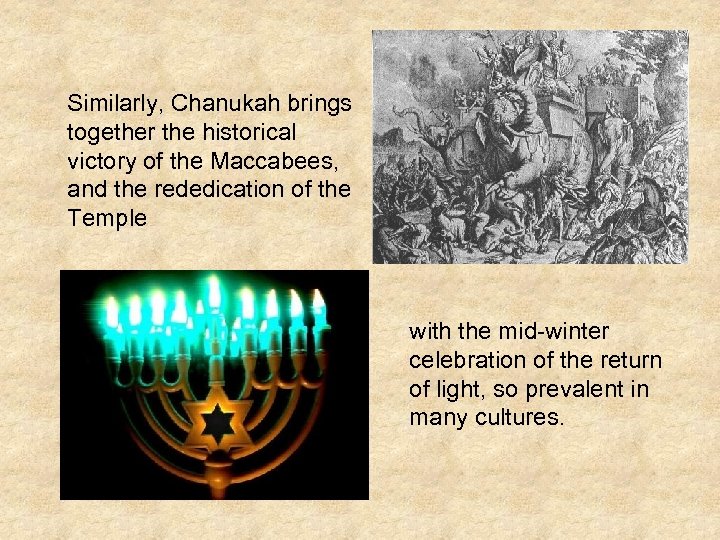 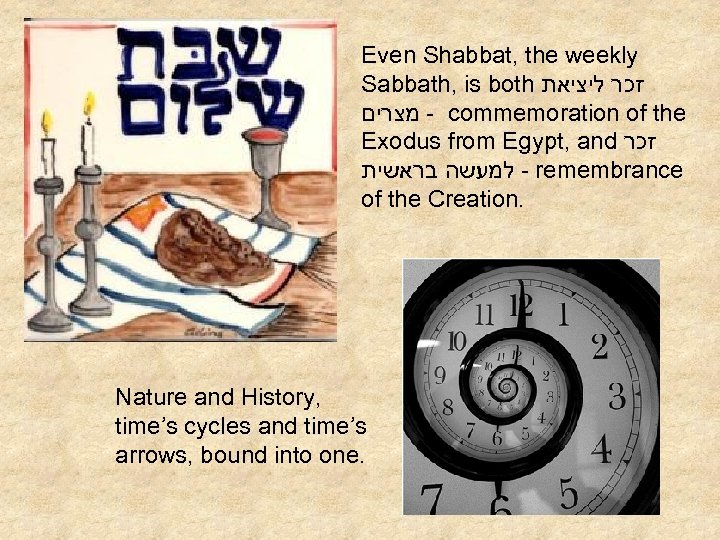 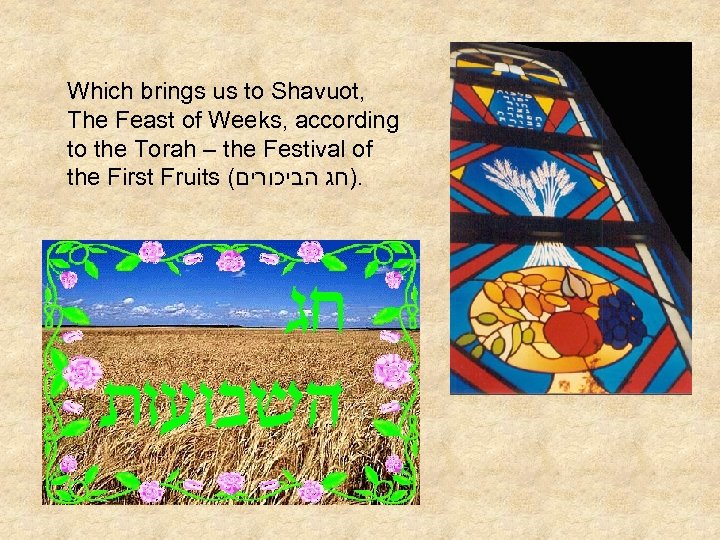 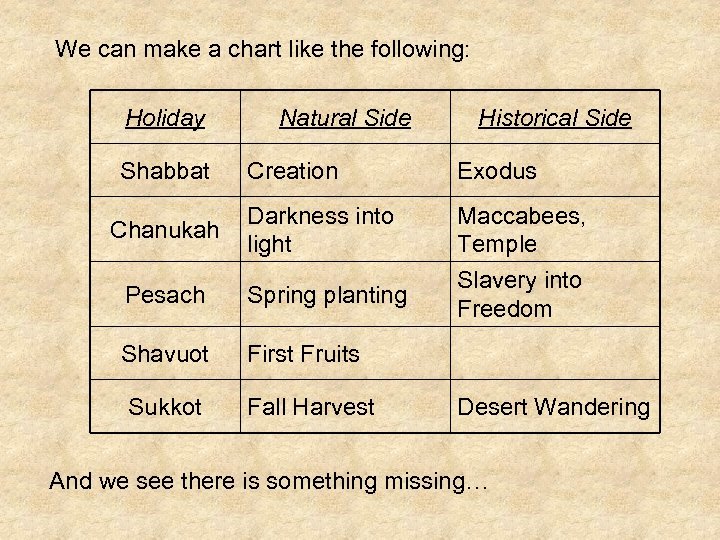 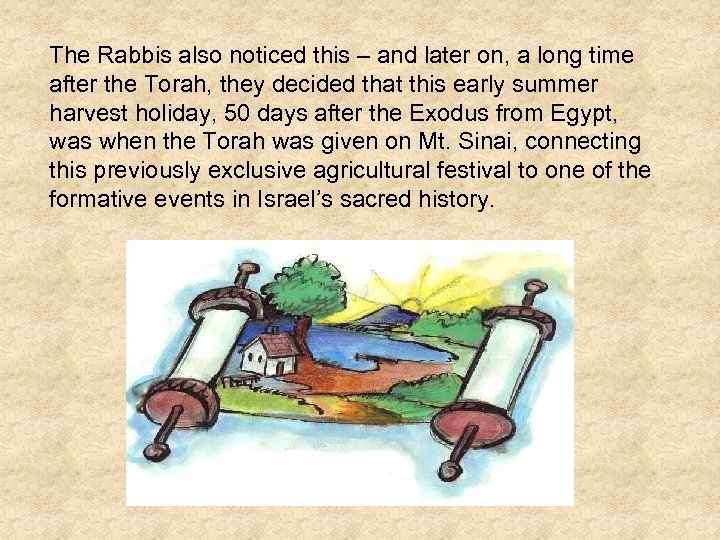 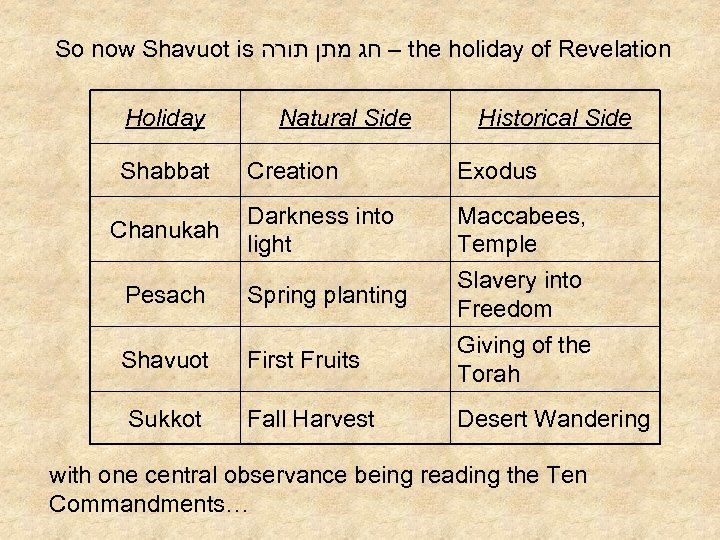 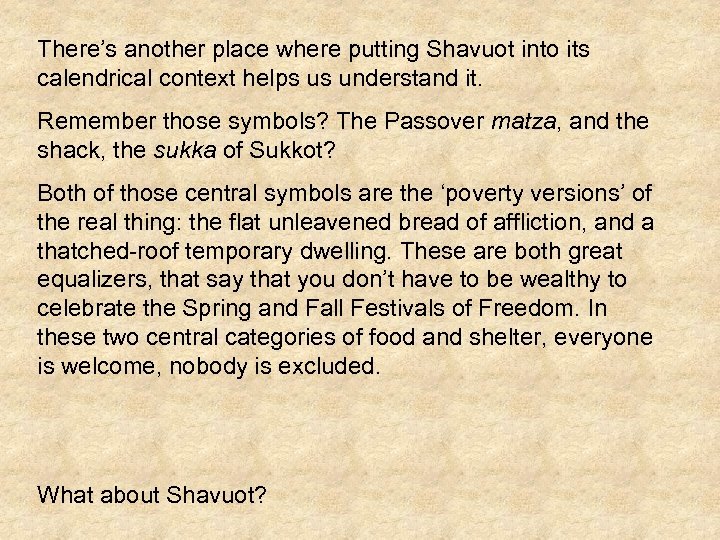 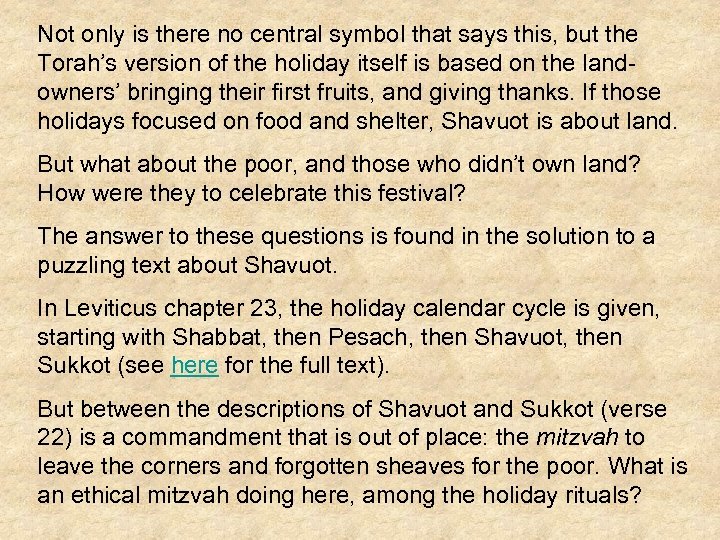 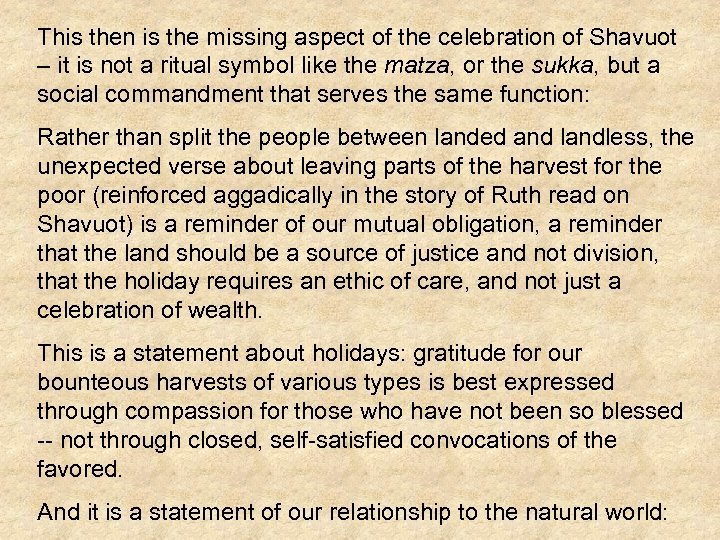 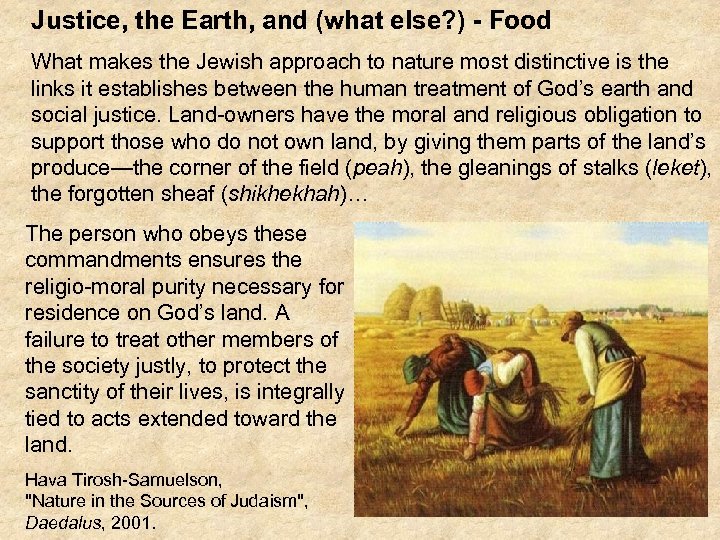 The Jews’ catechism is their calendar. –S. R. Hirsch Judaism as a tradition deeply affirms both our historical memory, the events in time that have constituted us as a people, as well as our connection to land, nature and natural cycles. One of the cool things about the Jewish calendar is that just about every major holiday expresses both of these sides.

So for instance – Pesach (Passover) is both the Holiday of Spring ( , )חג האביב the spring planting, as well as, of course, the Holiday of Freedom ( – )חג החירות the Exodus from Egypt. Similarly – Sukkot is both the autumn harvest festival, ( , )חג האסיף and the commemoration of the period of the Wandering in the Desert.

Even the symbols of these festivals represent both sides: • The matza is the unleavened bread eaten hastily on the way from slavery to freedom, as well as representing the new grain of the new harvest. • The sukka is both the shack the harvesters would sleep in during the busy harvest season; and the temporary dwelling during the Desert wanderings.

Similarly, Chanukah brings together the historical victory of the Maccabees, and the rededication of the Temple with the mid-winter celebration of the return of light, so prevalent in many cultures.

Even Shabbat, the weekly Sabbath, is both זכר ליציאת - מצרים commemoration of the Exodus from Egypt, and זכר - למעשה בראשית remembrance of the Creation. Nature and History, time’s cycles and time’s arrows, bound into one.

Which brings us to Shavuot, The Feast of Weeks, according to the Torah – the Festival of the First Fruits (. )חג הביכורים

We can make a chart like the following: Holiday Shabbat Natural Side Historical Side Creation Exodus Chanukah Darkness into light Maccabees, Temple Pesach Spring planting Slavery into Freedom Shavuot First Fruits Sukkot Fall Harvest Desert Wandering And we see there is something missing…

The Rabbis also noticed this – and later on, a long time after the Torah, they decided that this early summer harvest holiday, 50 days after the Exodus from Egypt, was when the Torah was given on Mt. Sinai, connecting this previously exclusive agricultural festival to one of the formative events in Israel’s sacred history.

There’s another place where putting Shavuot into its calendrical context helps us understand it. Remember those symbols? The Passover matza, and the shack, the sukka of Sukkot? Both of those central symbols are the ‘poverty versions’ of the real thing: the flat unleavened bread of affliction, and a thatched-roof temporary dwelling. These are both great equalizers, that say that you don’t have to be wealthy to celebrate the Spring and Fall Festivals of Freedom. In these two central categories of food and shelter, everyone is welcome, nobody is excluded. What about Shavuot?

Not only is there no central symbol that says this, but the Torah’s version of the holiday itself is based on the landowners’ bringing their first fruits, and giving thanks. If those holidays focused on food and shelter, Shavuot is about land. But what about the poor, and those who didn’t own land? How were they to celebrate this festival? The answer to these questions is found in the solution to a puzzling text about Shavuot. In Leviticus chapter 23, the holiday calendar cycle is given, starting with Shabbat, then Pesach, then Shavuot, then Sukkot (see here for the full text). But between the descriptions of Shavuot and Sukkot (verse 22) is a commandment that is out of place: the mitzvah to leave the corners and forgotten sheaves for the poor. What is an ethical mitzvah doing here, among the holiday rituals?

This then is the missing aspect of the celebration of Shavuot – it is not a ritual symbol like the matza, or the sukka, but a social commandment that serves the same function: Rather than split the people between landed and landless, the unexpected verse about leaving parts of the harvest for the poor (reinforced aggadically in the story of Ruth read on Shavuot) is a reminder of our mutual obligation, a reminder that the land should be a source of justice and not division, that the holiday requires an ethic of care, and not just a celebration of wealth. This is a statement about holidays: gratitude for our bounteous harvests of various types is best expressed through compassion for those who have not been so blessed -- not through closed, self-satisfied convocations of the favored. And it is a statement of our relationship to the natural world:

Justice, the Earth, and (what else? ) - Food What makes the Jewish approach to nature most distinctive is the links it establishes between the human treatment of God’s earth and social justice. Land-owners have the moral and religious obligation to support those who do not own land, by giving them parts of the land’s produce—the corner of the field (peah), the gleanings of stalks (leket), the forgotten sheaf (shikhekhah)… The person who obeys these commandments ensures the religio-moral purity necessary for residence on God’s land. A failure to treat other members of the society justly, to protect the sanctity of their lives, is integrally tied to acts extended toward the land. Hava Tirosh-Samuelson, "Nature in the Sources of Judaism", Daedalus, 2001.

Questions for further thought and discussion: • Most of us don’t have fields for the poor to glean in. How should we best express the values of the mitzvot of leket and peah today? • In general, how can we expand the circles of our holiday celebrations to make sure that no one is left out? • Justice and the Earth: Environmental justice is a leading topic in social activism today. It usually focuses on one of the 3 Rs: equal access to Resources (like food, shelter, and land discussed above); equal protection from Risk (health threats, pollutants); and equal Representation in decision making. What environmental justice issues exist in your community that you can address?