Little Red Riding Hood with a twist A 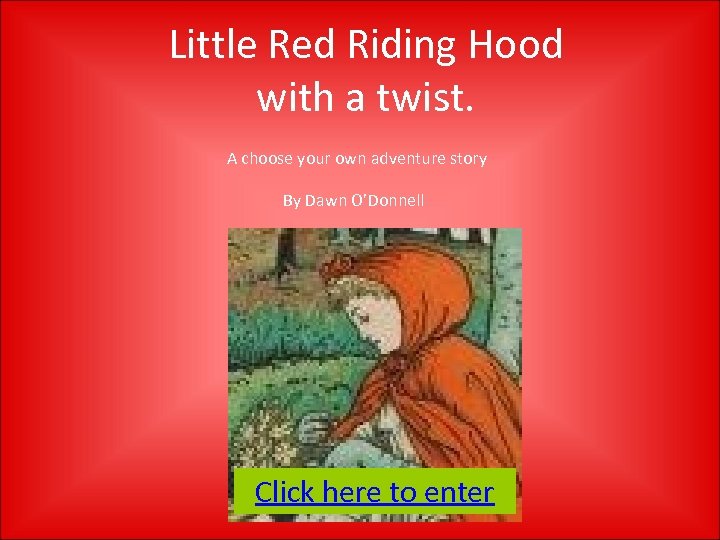 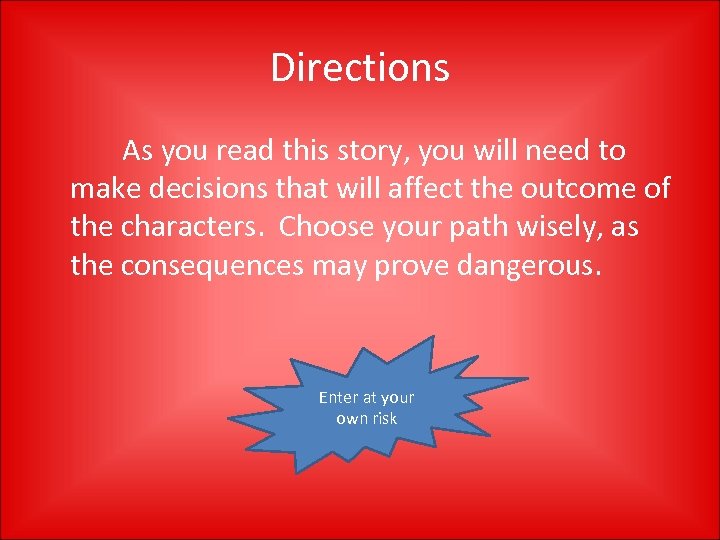 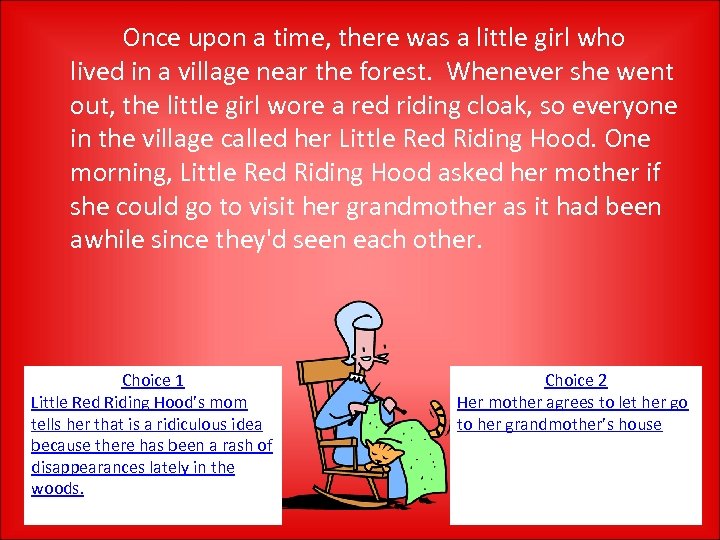 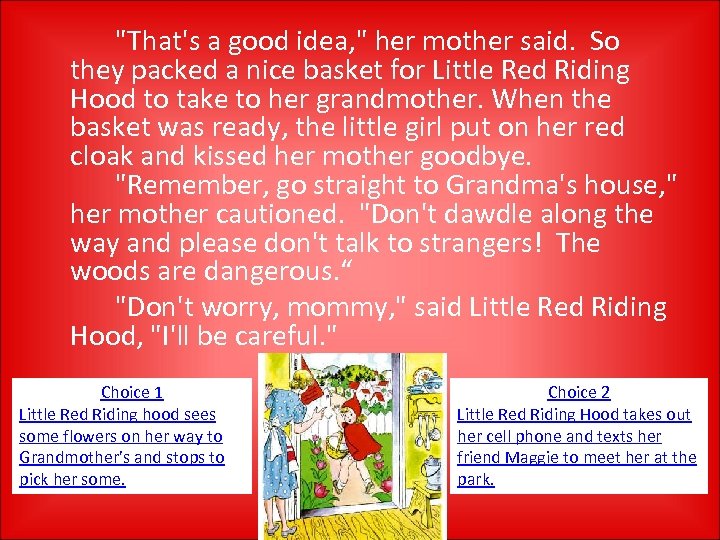 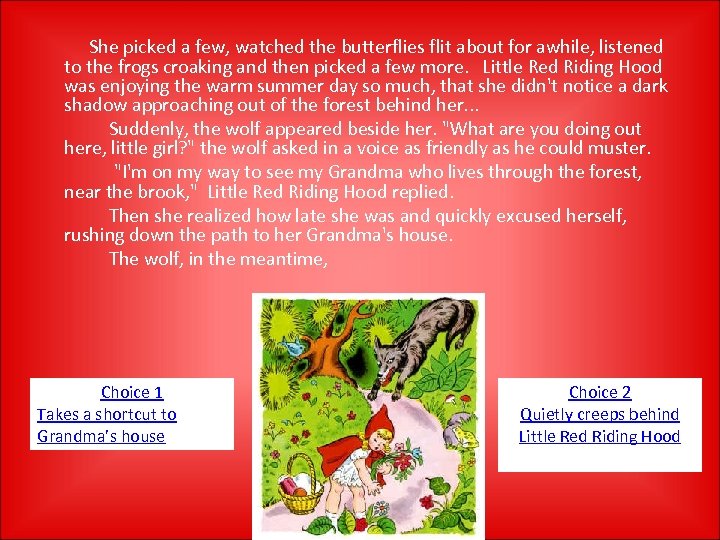 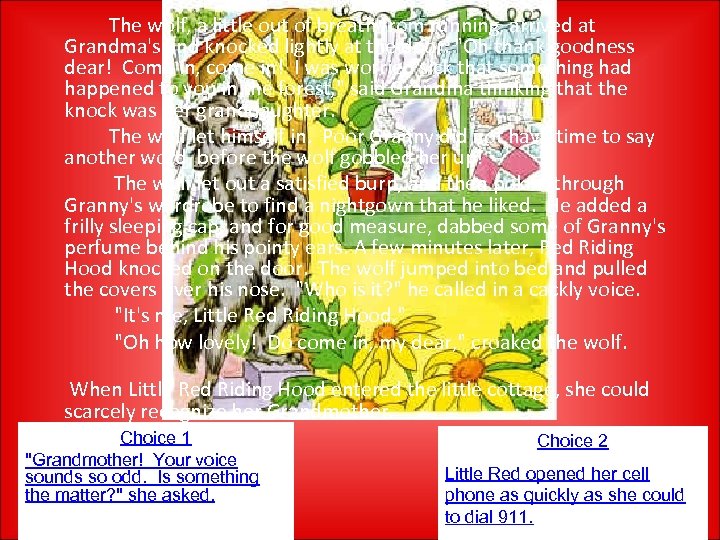 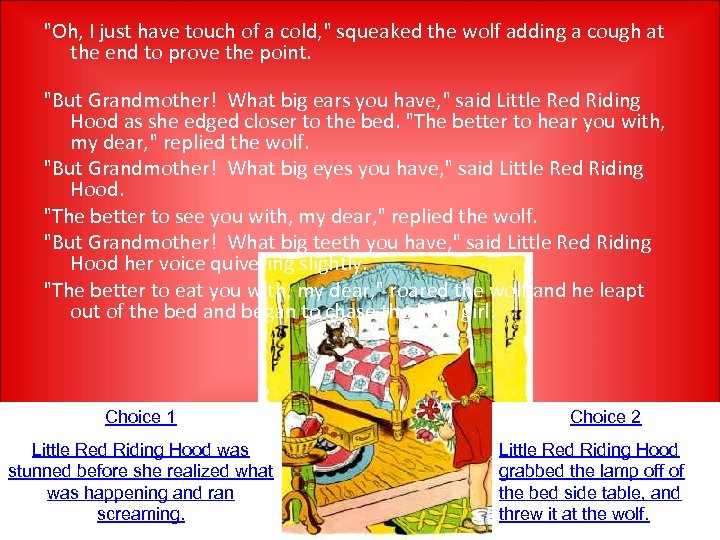 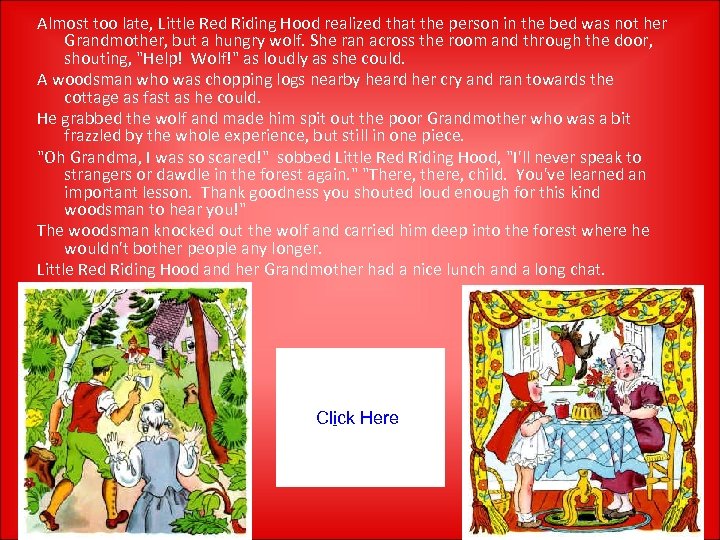 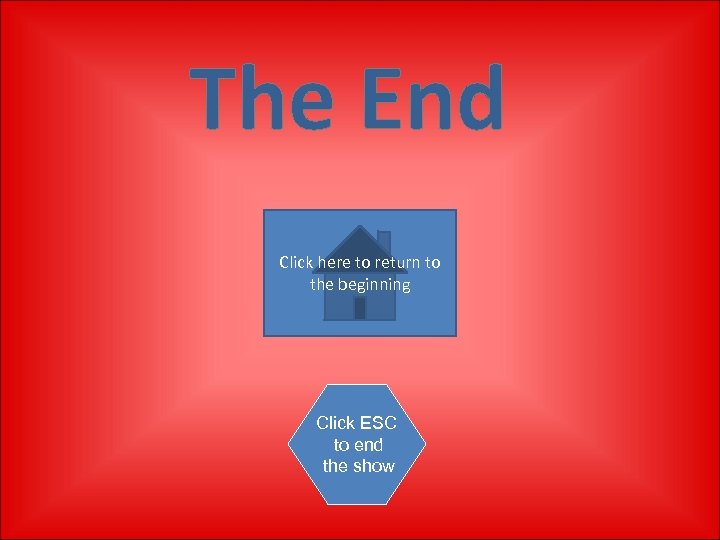 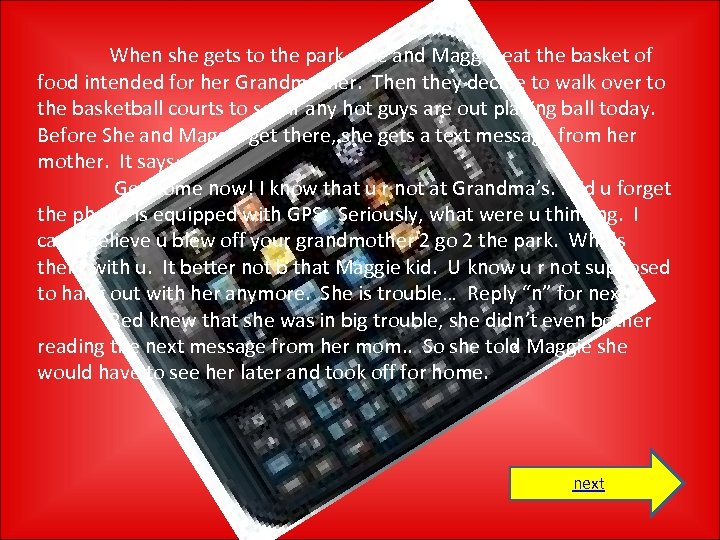 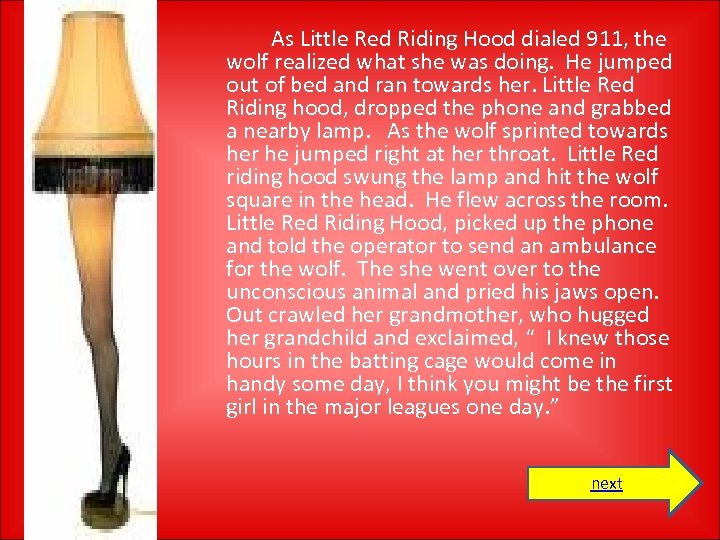 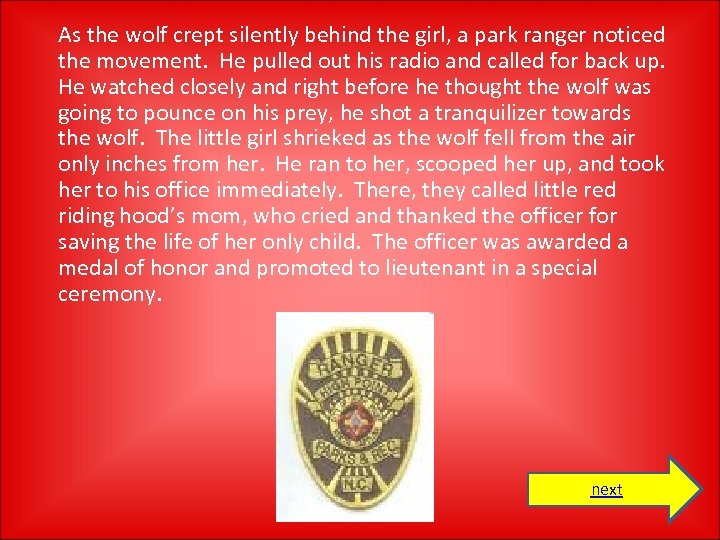 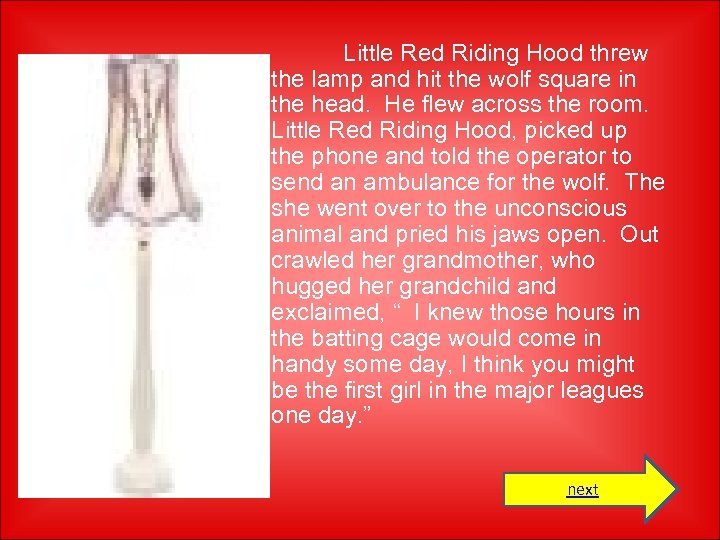 Скачать презентацию Little Red Riding Hood with a twist A

Little Red Riding Hood with a twist. A choose your own adventure story By Dawn O’Donnell Click here to enter

Directions As you read this story, you will need to make decisions that will affect the outcome of the characters. Choose your path wisely, as the consequences may prove dangerous. Enter at your own risk

She picked a few, watched the butterflies flit about for awhile, listened to the frogs croaking and then picked a few more. Little Red Riding Hood was enjoying the warm summer day so much, that she didn't notice a dark shadow approaching out of the forest behind her. . . Suddenly, the wolf appeared beside her. "What are you doing out here, little girl? " the wolf asked in a voice as friendly as he could muster. "I'm on my way to see my Grandma who lives through the forest, near the brook, " Little Red Riding Hood replied. Then she realized how late she was and quickly excused herself, rushing down the path to her Grandma's house. The wolf, in the meantime, Choice 1 Takes a shortcut to Grandma’s house Choice 2 Quietly creeps behind Little Red Riding Hood

The wolf, a little out of breath from running, arrived at Grandma's and knocked lightly at the door. "Oh thank goodness dear! Come in, come in! I was worried sick that something had happened to you in the forest, " said Grandma thinking that the knock was her granddaughter. The wolf let himself in. Poor Granny did not have time to say another word, before the wolf gobbled her up! The wolf let out a satisfied burp, and then poked through Granny's wardrobe to find a nightgown that he liked. He added a frilly sleeping cap, and for good measure, dabbed some of Granny's perfume behind his pointy ears. A few minutes later, Red Riding Hood knocked on the door. The wolf jumped into bed and pulled the covers over his nose. "Who is it? " he called in a cackly voice. "It's me, Little Red Riding Hood. " "Oh how lovely! Do come in, my dear, " croaked the wolf. When Little Red Riding Hood entered the little cottage, she could scarcely recognize her Grandmother. Choice 1 "Grandmother! Your voice sounds so odd. Is something the matter? " she asked. Choice 2 Little Red opened her cell phone as quickly as she could to dial 911.

Almost too late, Little Red Riding Hood realized that the person in the bed was not her Grandmother, but a hungry wolf. She ran across the room and through the door, shouting, "Help! Wolf!" as loudly as she could. A woodsman who was chopping logs nearby heard her cry and ran towards the cottage as fast as he could. He grabbed the wolf and made him spit out the poor Grandmother who was a bit frazzled by the whole experience, but still in one piece. "Oh Grandma, I was so scared!" sobbed Little Red Riding Hood, "I'll never speak to strangers or dawdle in the forest again. " "There, there, child. You've learned an important lesson. Thank goodness you shouted loud enough for this kind woodsman to hear you!" The woodsman knocked out the wolf and carried him deep into the forest where he wouldn't bother people any longer. Little Red Riding Hood and her Grandmother had a nice lunch and a long chat. Click Here

When she gets to the park, She and Maggie eat the basket of food intended for her Grandmother. Then they decide to walk over to the basketball courts to see if any hot guys are out playing ball today. Before She and Maggie get there, she gets a text message from her mother. It says: Get home now! I know that u r not at Grandma’s. Did u forget the phone is equipped with GPS. Seriously, what were u thinking. I can’t believe u blew off your grandmother 2 go 2 the park. Who’s there with u. It better not b that Maggie kid. U know u r not supposed to hang out with her anymore. She is trouble… Reply “n” for next Red knew that she was in big trouble, she didn’t even bother reading the next message from her mom. . So she told Maggie she would have to see her later and took off for home. next

As Little Red Riding Hood dialed 911, the wolf realized what she was doing. He jumped out of bed and ran towards her. Little Red Riding hood, dropped the phone and grabbed a nearby lamp. As the wolf sprinted towards her he jumped right at her throat. Little Red riding hood swung the lamp and hit the wolf square in the head. He flew across the room. Little Red Riding Hood, picked up the phone and told the operator to send an ambulance for the wolf. The she went over to the unconscious animal and pried his jaws open. Out crawled her grandmother, who hugged her grandchild and exclaimed, “ I knew those hours in the batting cage would come in handy some day, I think you might be the first girl in the major leagues one day. ” next

As the wolf crept silently behind the girl, a park ranger noticed the movement. He pulled out his radio and called for back up. He watched closely and right before he thought the wolf was going to pounce on his prey, he shot a tranquilizer towards the wolf. The little girl shrieked as the wolf fell from the air only inches from her. He ran to her, scooped her up, and took her to his office immediately. There, they called little red riding hood’s mom, who cried and thanked the officer for saving the life of her only child. The officer was awarded a medal of honor and promoted to lieutenant in a special ceremony. next

Little Red Riding Hood threw the lamp and hit the wolf square in the head. He flew across the room. Little Red Riding Hood, picked up the phone and told the operator to send an ambulance for the wolf. The she went over to the unconscious animal and pried his jaws open. Out crawled her grandmother, who hugged her grandchild and exclaimed, “ I knew those hours in the batting cage would come in handy some day, I think you might be the first girl in the major leagues one day. ” next

The image of leader in the Russian cartoons