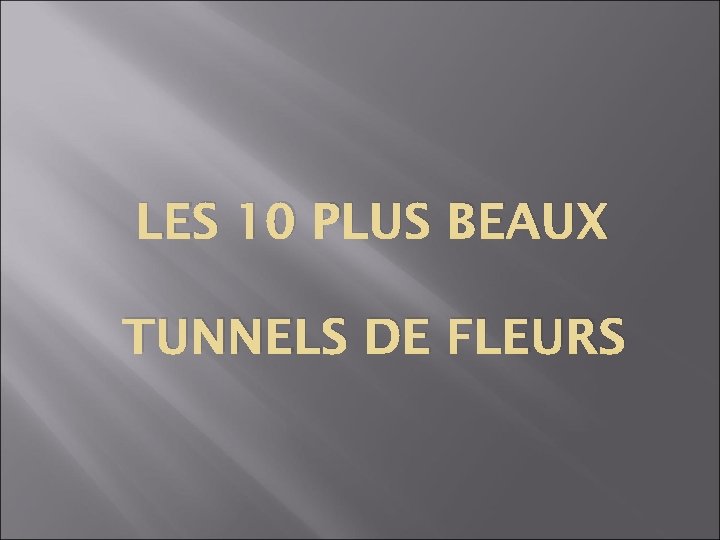 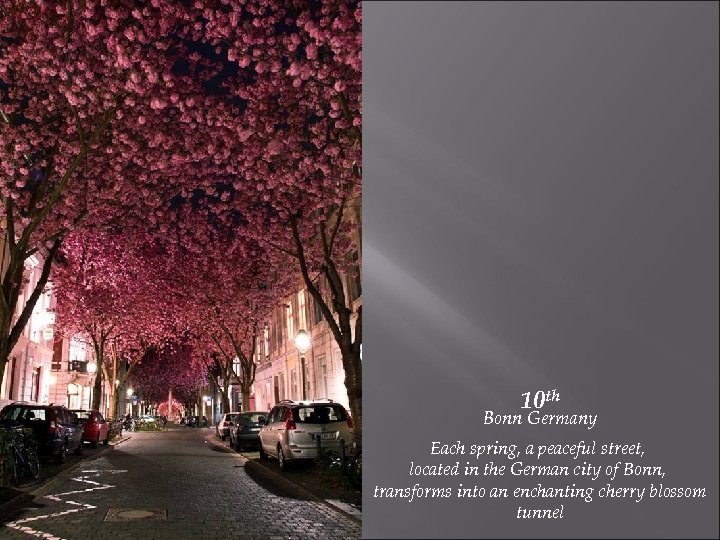 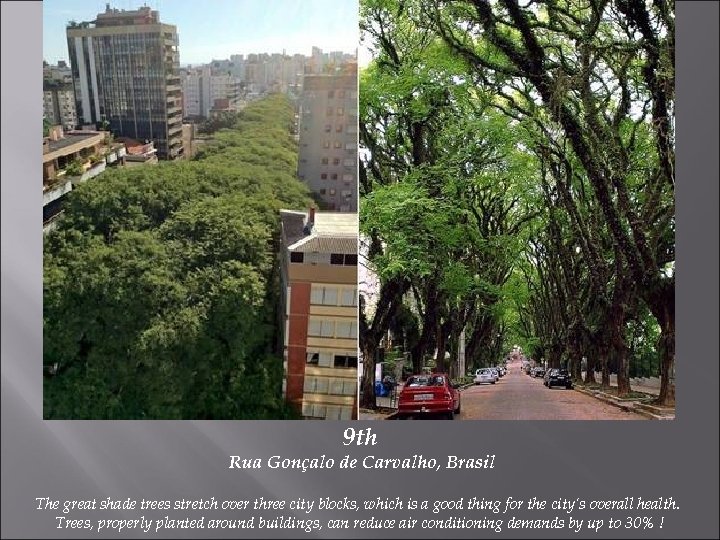 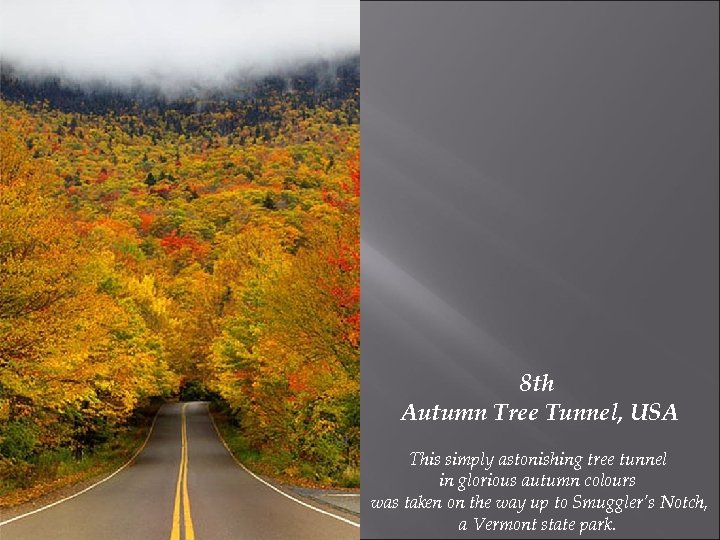 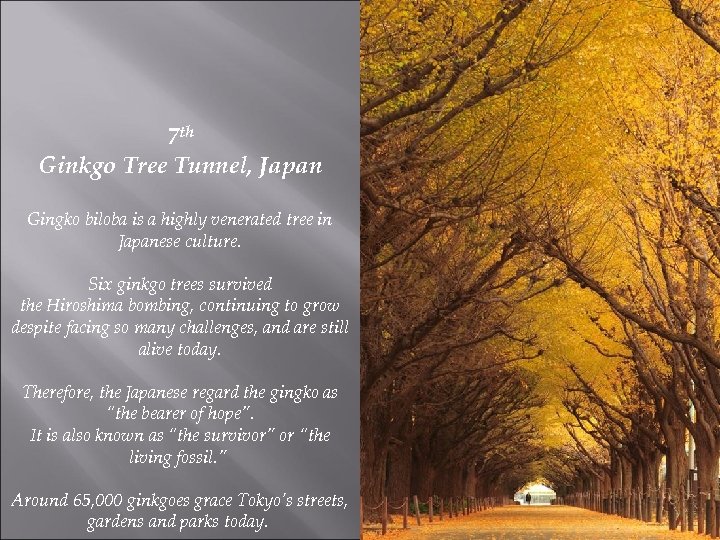 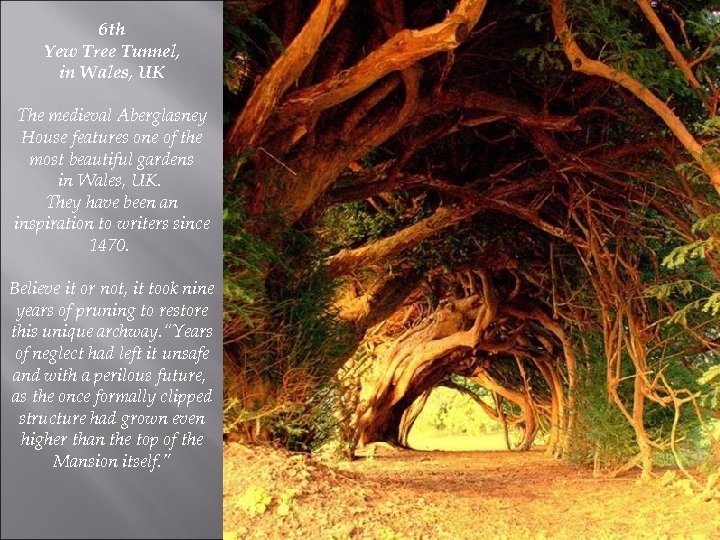 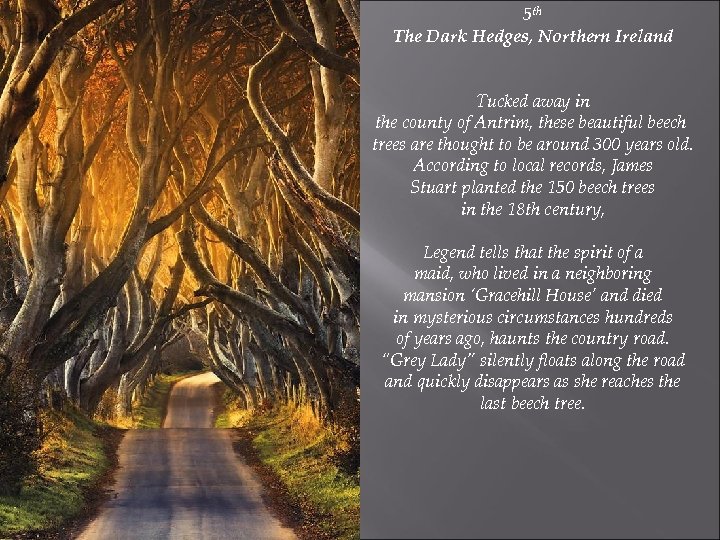 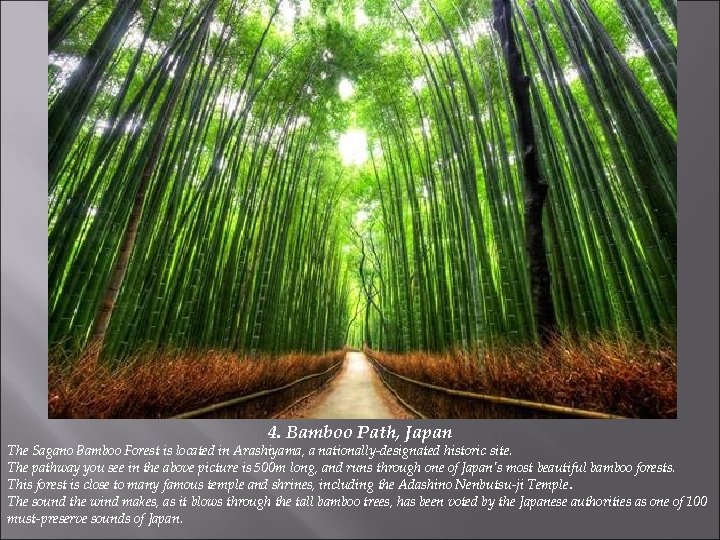 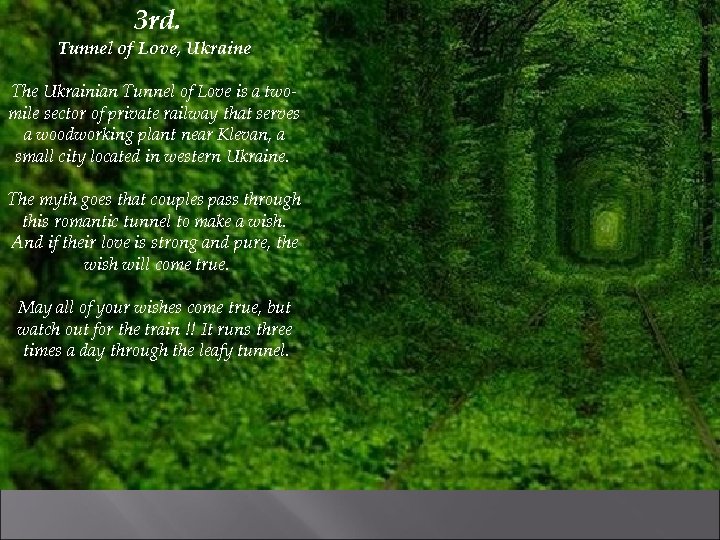 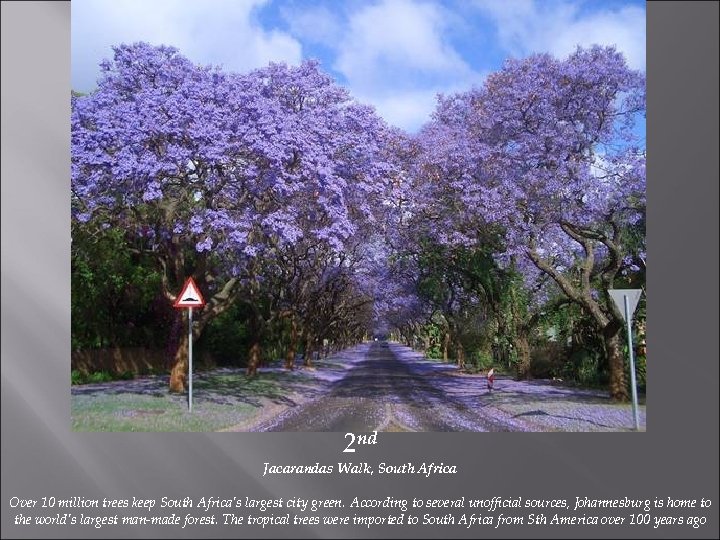 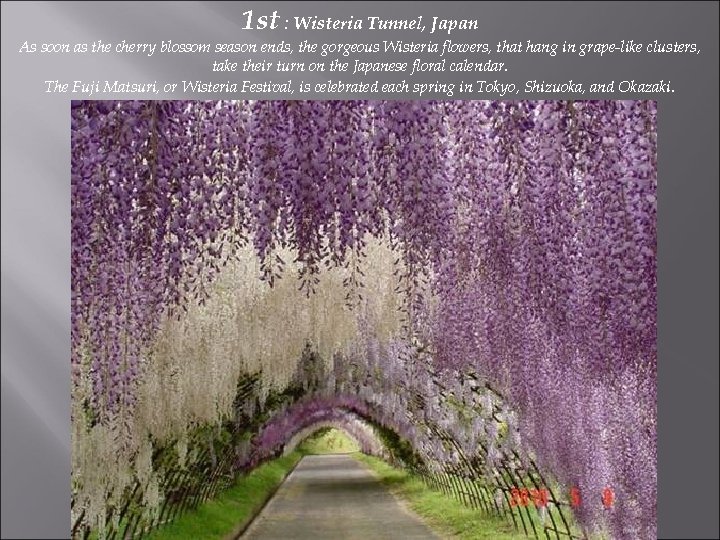 10 th Bonn Germany Each spring, a peaceful street, located in the German city of Bonn, transforms into an enchanting cherry blossom tunnel

9 th Rua Gonçalo de Carvalho, Brasil The great shade trees stretch over three city blocks, which is a good thing for the city’s overall health. Trees, properly planted around buildings, can reduce air conditioning demands by up to 30% !

7 th Ginkgo Tree Tunnel, Japan Gingko biloba is a highly venerated tree in Japanese culture. Six ginkgo trees survived the Hiroshima bombing, continuing to grow despite facing so many challenges, and are still alive today. Therefore, the Japanese regard the gingko as “the bearer of hope”. It is also known as “the survivor” or “the living fossil. ” Around 65, 000 ginkgoes grace Tokyo’s streets, gardens and parks today.

6 th Yew Tree Tunnel, in Wales, UK The medieval Aberglasney House features one of the most beautiful gardens in Wales, UK. They have been an inspiration to writers since 1470. Believe it or not, it took nine years of pruning to restore this unique archway. “Years of neglect had left it unsafe and with a perilous future, as the once formally clipped structure had grown even higher than the top of the Mansion itself. ”

5 th The Dark Hedges, Northern Ireland Tucked away in the county of Antrim, these beautiful beech trees are thought to be around 300 years old. According to local records, James Stuart planted the 150 beech trees in the 18 th century, Legend tells that the spirit of a maid, who lived in a neighboring mansion ‘Gracehill House’ and died in mysterious circumstances hundreds of years ago, haunts the country road. “Grey Lady” silently floats along the road and quickly disappears as she reaches the last beech tree.

4. Bamboo Path, Japan The Sagano Bamboo Forest is located in Arashiyama, a nationally-designated historic site. The pathway you see in the above picture is 500 m long, and runs through one of Japan’s most beautiful bamboo forests. This forest is close to many famous temple and shrines, including the Adashino Nenbutsu-ji Temple. The sound the wind makes, as it blows through the tall bamboo trees, has been voted by the Japanese authorities as one of 100 must-preserve sounds of Japan.

3 rd. Tunnel of Love, Ukraine The Ukrainian Tunnel of Love is a twomile sector of private railway that serves a woodworking plant near Klevan, a small city located in western Ukraine. The myth goes that couples pass through this romantic tunnel to make a wish. And if their love is strong and pure, the wish will come true. May all of your wishes come true, but watch out for the train !! It runs three times a day through the leafy tunnel.

1 st : Wisteria Tunnel, Japan As soon as the cherry blossom season ends, the gorgeous Wisteria flowers, that hang in grape-like clusters, take their turn on the Japanese floral calendar. The Fuji Matsuri, or Wisteria Festival, is celebrated each spring in Tokyo, Shizuoka, and Okazaki.