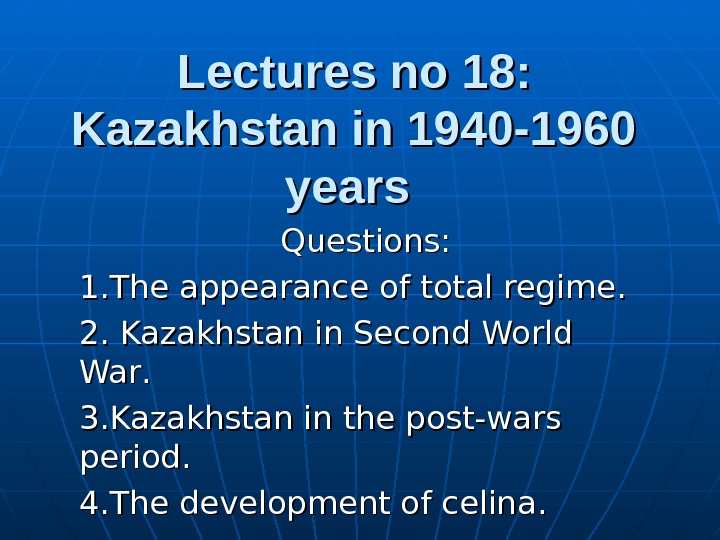 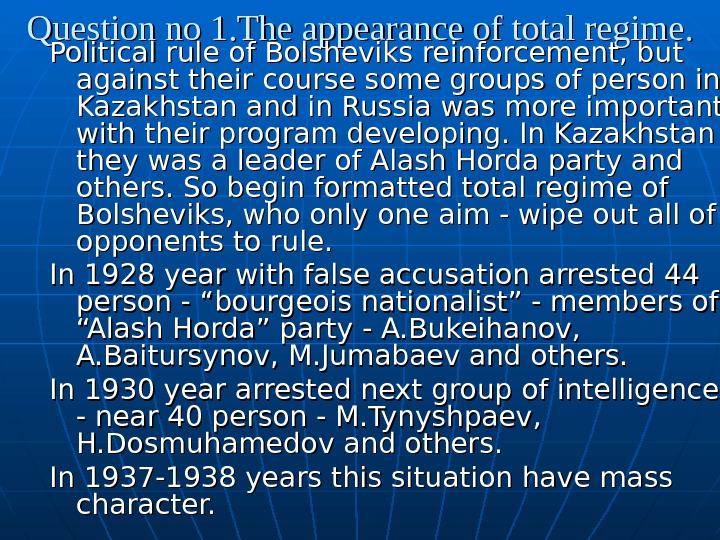 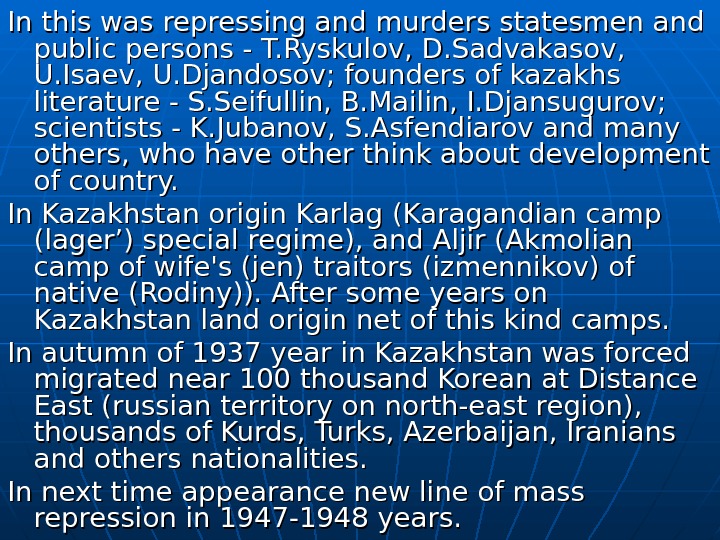 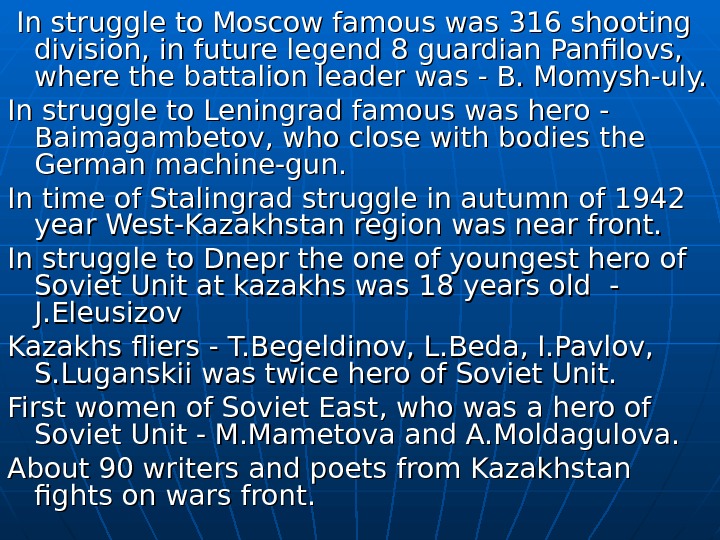 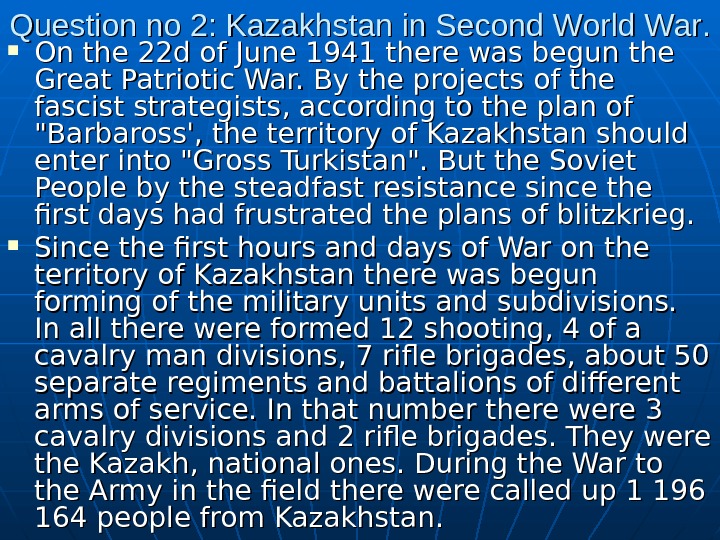 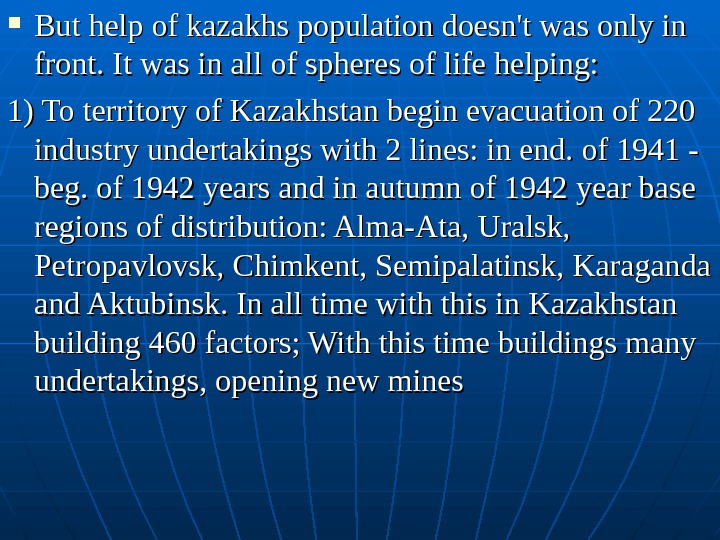 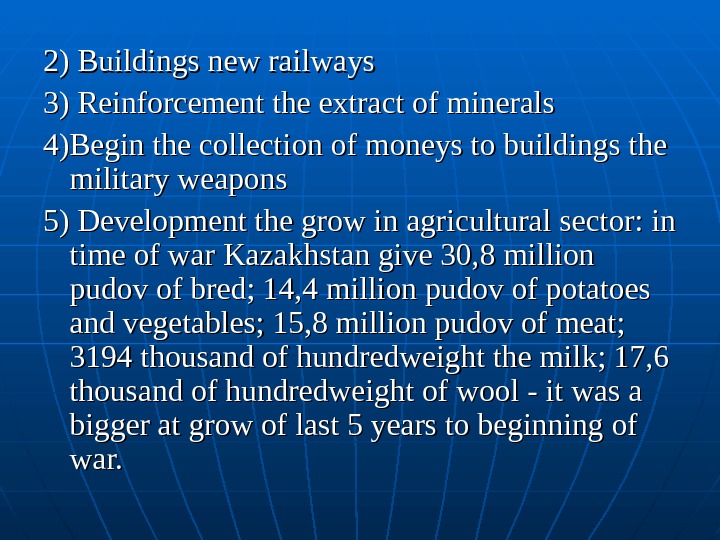 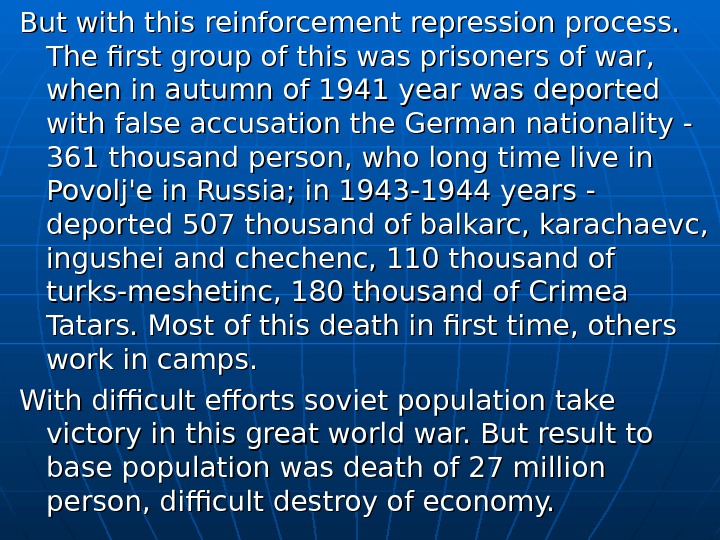 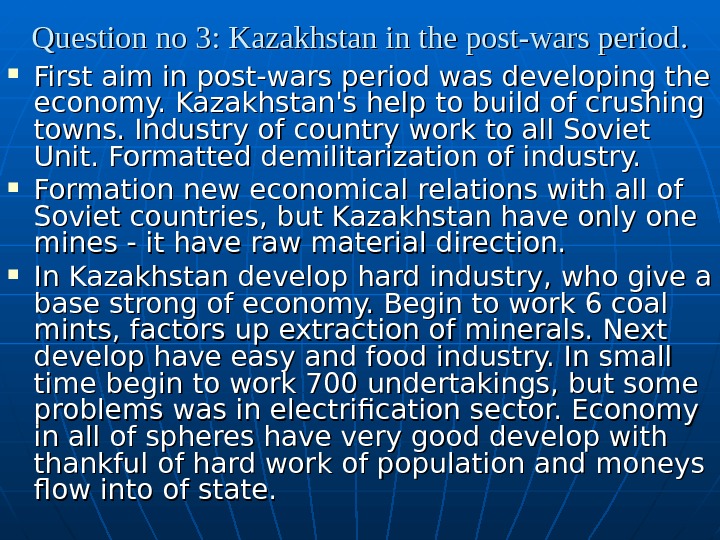 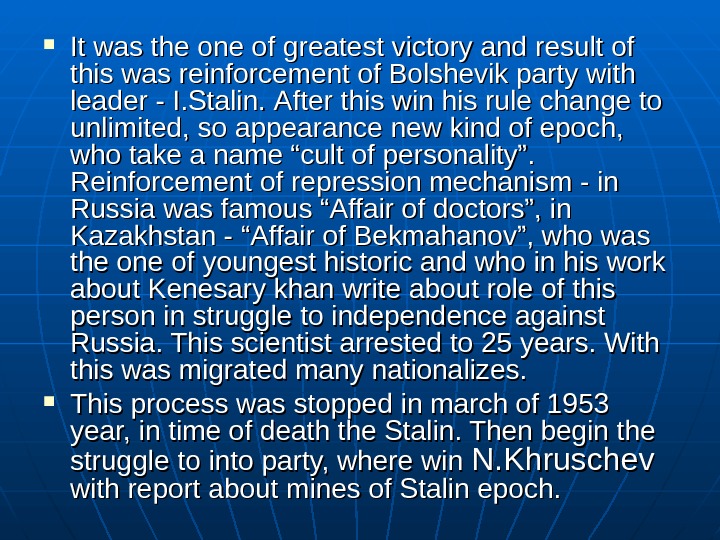 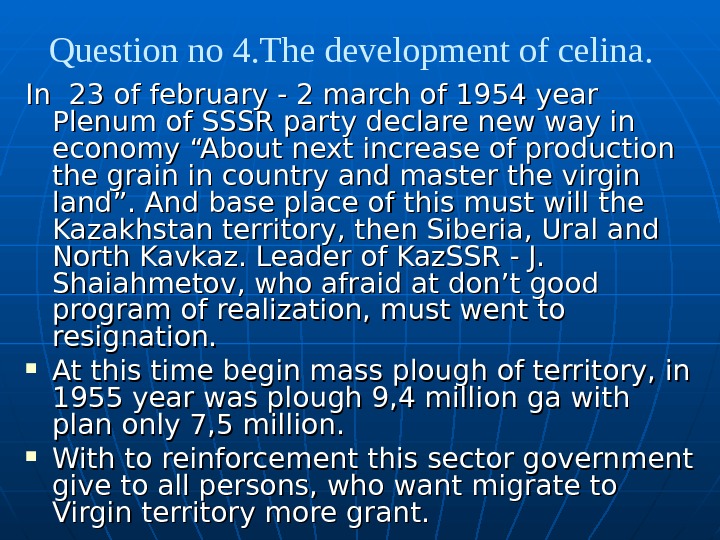 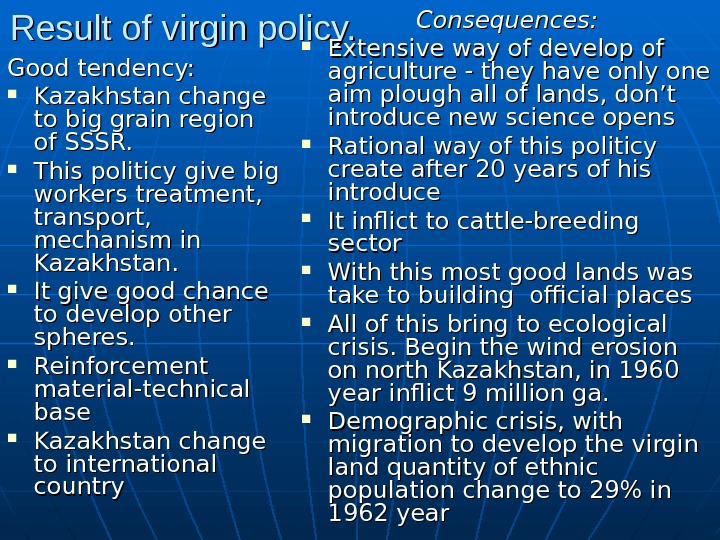 Question no 1. 1. The appearance of total regime. . Political rule of Bolsheviks reinforcement, but against their course some groups of person in Kazakhstan and in Russia was more important with their program developing. In Kazakhstan they was a leader of Alash Horda party and others. So begin formatted total regime of Bolsheviks, who only one aim — wipe out all of opponents to rule. In 1928 year with false accusation arrested 44 person — “bourgeois nationalist” — members of “Alash Horda” party — A. Bukeihanov, A. Baitursynov, M. Jumabaev and others. In 1930 year arrested next group of intelligence — near 40 person — M. Tynyshpaev, H. Dosmuhamedov and others. In 1937 -1938 years this situation have mass character.

In this was repressing and murders statesmen and public persons — T. Ryskulov, D. Sadvakasov, U. Isaev, U. Djandosov; founders of kazakhs literature — S. Seifullin, B. Mailin, I. Djansugurov; scientists — K. Jubanov, S. Asfendiarov and many others, who have other think about development of country. In Kazakhstan origin Karlag (Karagandian camp (lager’) special regime), and Aljir (Akmolian camp of wife’s (jen) traitors (izmennikov) of native (Rodiny)). After some years on Kazakhstan land origin net of this kind camps. In autumn of 1937 year in Kazakhstan was forced migrated near 100 thousand Korean at Distance East (russian territory on north-east region), thousands of Kurds, Turks, Azerbaijan, Iranians and others nationalities. In next time appearance new line of mass repression in 1947 -1948 years.

Question no 2: Kazakhstan in Second World War. . On the 22 d of June 1941 there was begun the Great Patriotic War. By the projects of the fascist strategists, according to the plan of «Barbaross’, the territory of Kazakhstan should enter into «Gross Turkistan». But the Soviet People by the steadfast resistance since the first days had frustrated the plans of blitzkrieg. Since the first hours and days of War on the territory of Kazakhstan there was begun forming of the military units and subdivisions. In all there were formed 12 shooting, 4 of a cavalry man divisions, 7 rifle brigades, about 50 separate regiments and battalions of different arms of service. In that number there were 3 cavalry divisions and 2 rifle brigades. They were the Kazakh, national ones. During the War to the Army in the field there were called up 1 196 164 people from Kazakhstan.

But help of kazakhs population doesn’t was only in front. It was in all of spheres of life helping: 1) To territory of Kazakhstan begin evacuation of 220 industry undertakings with 2 lines: in end. of 1941 — beg. of 1942 years and in autumn of 1942 year base regions of distribution: Alma-Ata, Uralsk, Petropavlovsk, Chimkent, Semipalatinsk, Karaganda and Aktubinsk. In all time with this in Kazakhstan building 460 factors; With this time buildings many undertakings, opening new mines

But with this reinforcement repression process. The first group of this was prisoners of war, when in autumn of 1941 year was deported with false accusation the German nationality — 361 thousand person, who long time live in Povolj’e in Russia; in 1943 -1944 years — deported 507 thousand of balkarc, karachaevc, ingushei and chechenc, 110 thousand of turks-meshetinc, 180 thousand of Crimea Tatars. Most of this death in first time, others work in camps. With difficult efforts soviet population take victory in this great world war. But result to base population was death of 27 million person, difficult destroy of economy.

Question no 3: Kazakhstan in the post-wars period. . First aim in post-wars period was developing the economy. Kazakhstan’s help to build of crushing towns. Industry of country work to all Soviet Unit. Formatted demilitarization of industry. Formation new economical relations with all of Soviet countries, but Kazakhstan have only one mines — it have raw material direction. In Kazakhstan develop hard industry, who give a base strong of economy. Begin to work 6 coal mints, factors up extraction of minerals. Next develop have easy and food industry. In small time begin to work 700 undertakings, but some problems was in electrification sector. Economy in all of spheres have very good develop with thankful of hard work of population and moneys flow into of state.

It was the one of greatest victory and result of this was reinforcement of Bolshevik party with leader — I. Stalin. After this win his rule change to unlimited, so appearance new kind of epoch, who take a name “cult of personality”. Reinforcement of repression mechanism — in Russia was famous “Affair of doctors”, in Kazakhstan — “Affair of Bekmahanov”, who was the one of youngest historic and who in his work about Kenesary khan write about role of this person in struggle to independence against Russia. This scientist arrested to 25 years. With this was migrated many nationalizes. This process was stopped in march of 1953 year, in time of death the Stalin. Then begin the struggle to into party, where win N. Khruschev with report about mines of Stalin epoch.

Question no 4. The development of celina. In 23 of february — 2 march of 1954 year Plenum of SSSR party declare new way in economy “About next increase of production the grain in country and master the virgin land”. And base place of this must will the Kazakhstan territory, then Siberia, Ural and North Kavkaz. Leader of Kaz. SSR — J. Shaiahmetov, who afraid at don’t good program of realization, must went to resignation. At this time begin mass plough of territory, in 1955 year was plough 9, 4 million ga with plan only 7, 5 million. With to reinforcement this sector government give to all persons, who want migrate to Virgin territory more grant.

Result of virgin policy. Good tendency: Kazakhstan change to big grain region of SSSR. This politicy give big workers treatment, transport, mechanism in Kazakhstan. It give good chance to develop other spheres. Reinforcement material-technical base Kazakhstan change to international country Consequences: Extensive way of develop of agriculture — they have only one aim plough all of lands, don’t introduce new science opens Rational way of this politicy create after 20 years of his introduce It inflict to cattle-breeding sector With this most good lands was take to building official places All of this bring to ecological crisis. Begin the wind erosion on north Kazakhstan, in 1960 year inflict 9 million ga. Demographic crisis, with migration to develop the virgin land quantity of ethnic population change to 29% in 1962 year