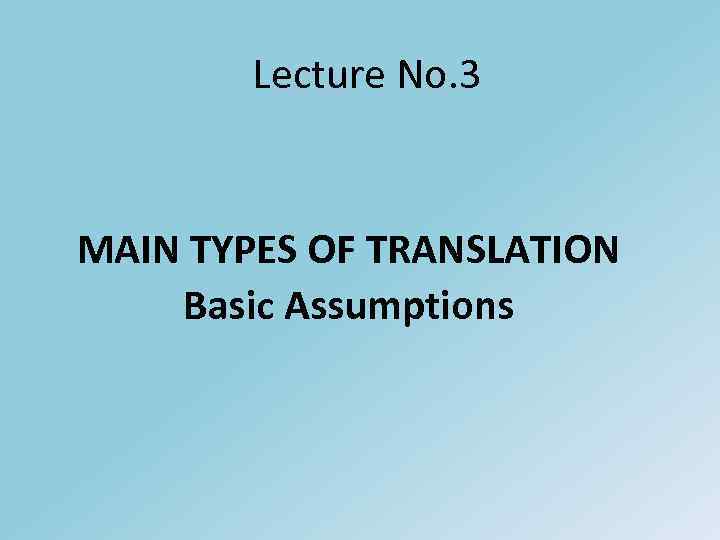 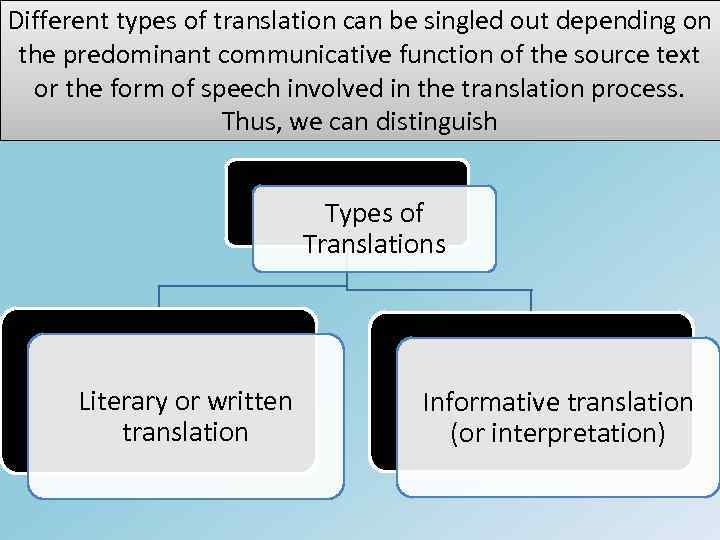 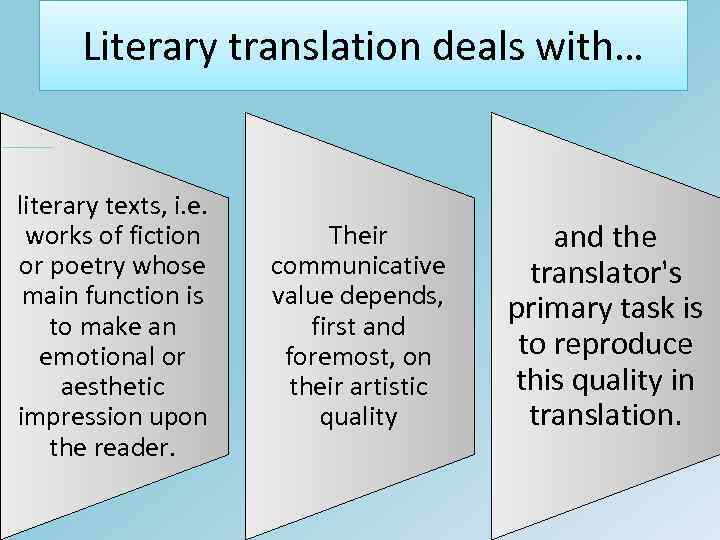 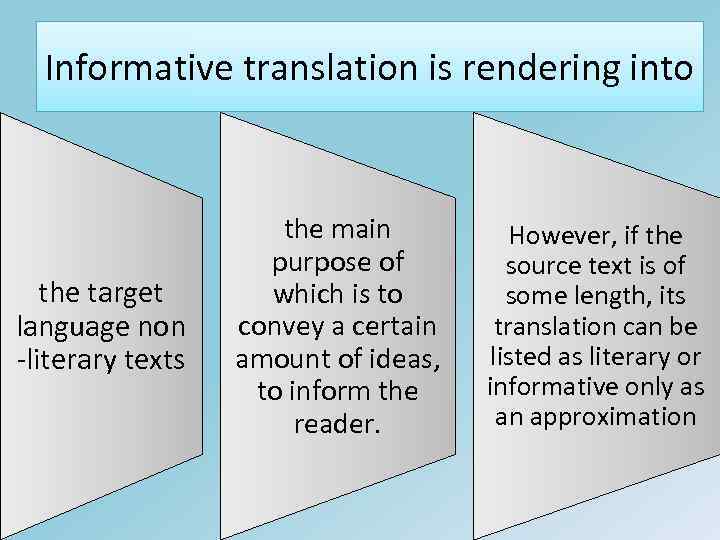 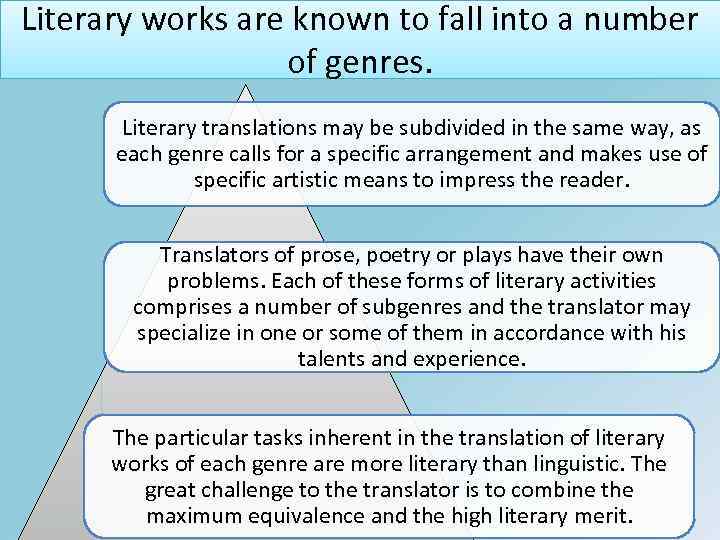 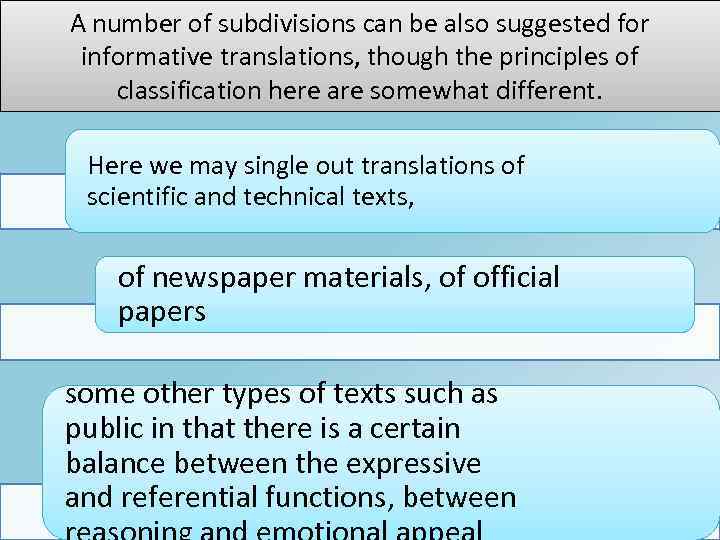 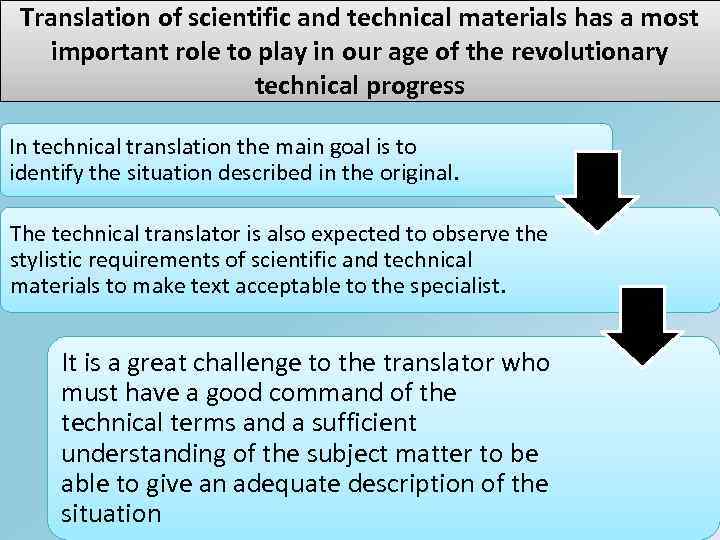 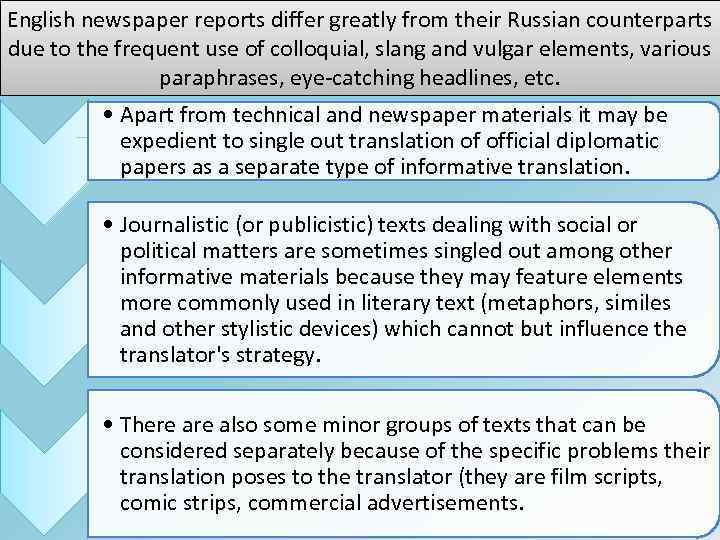 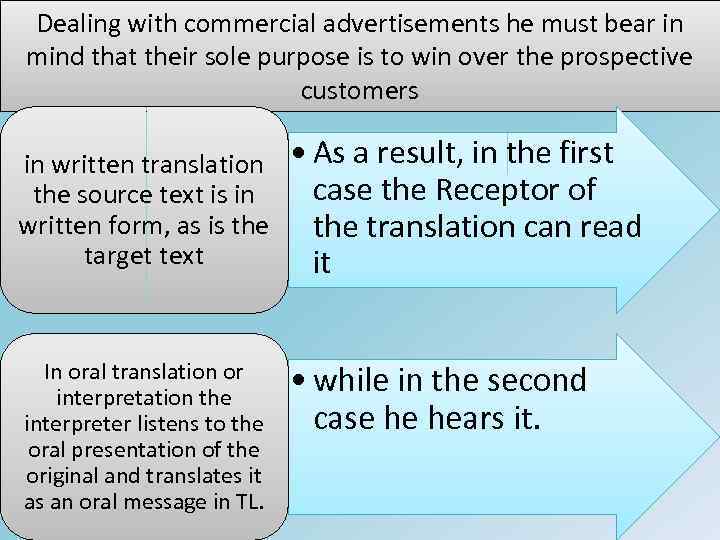 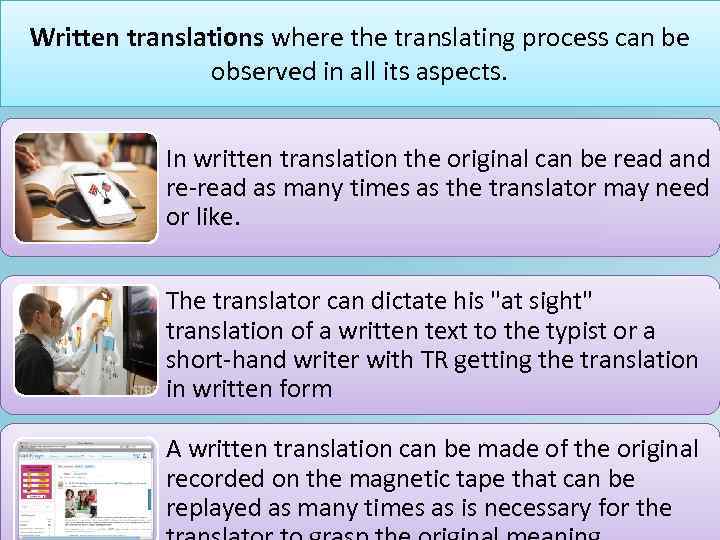 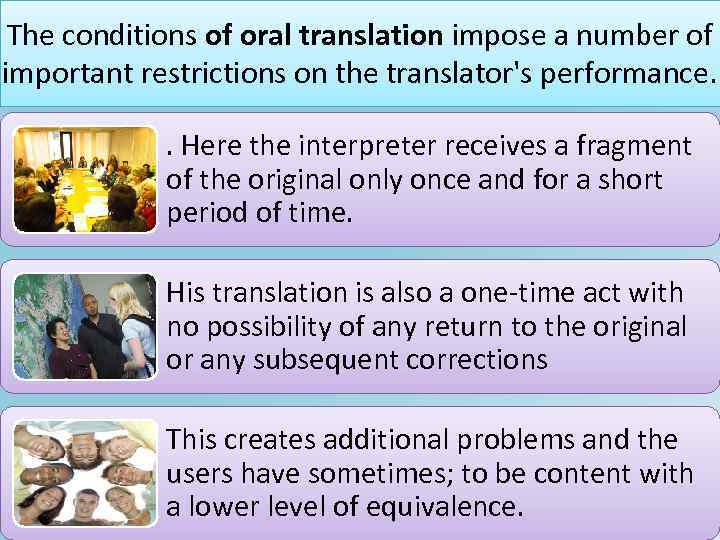 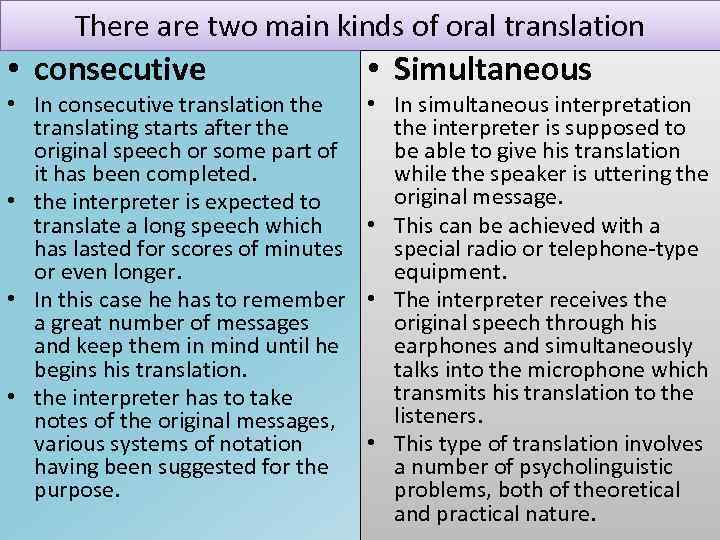 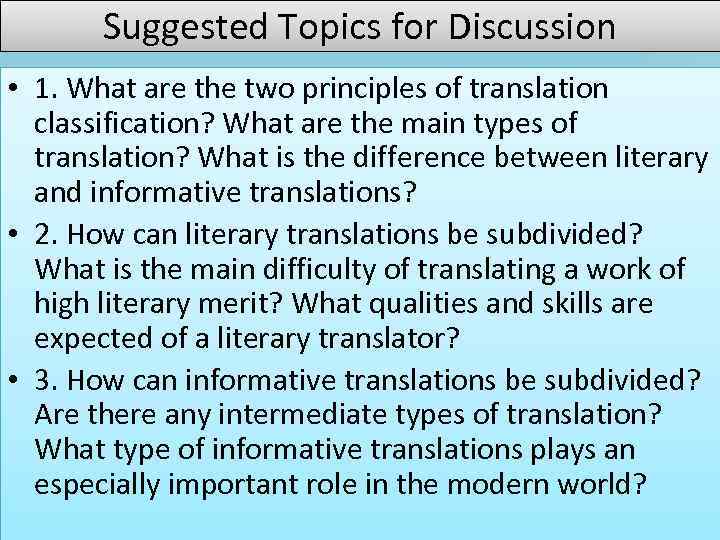 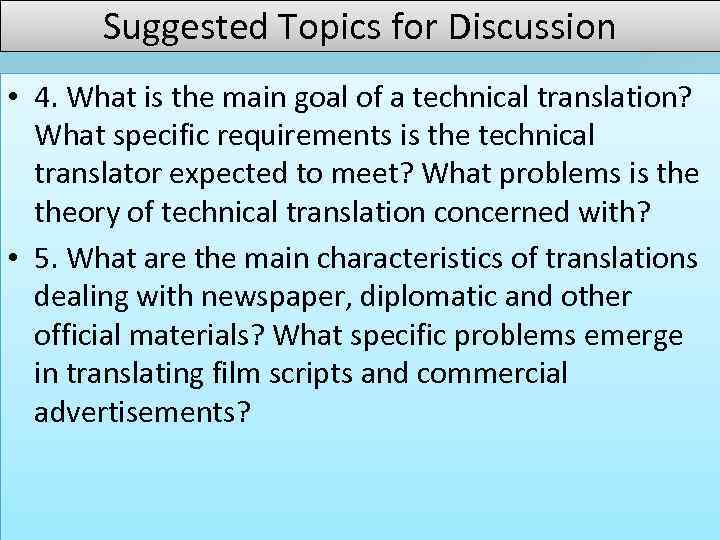 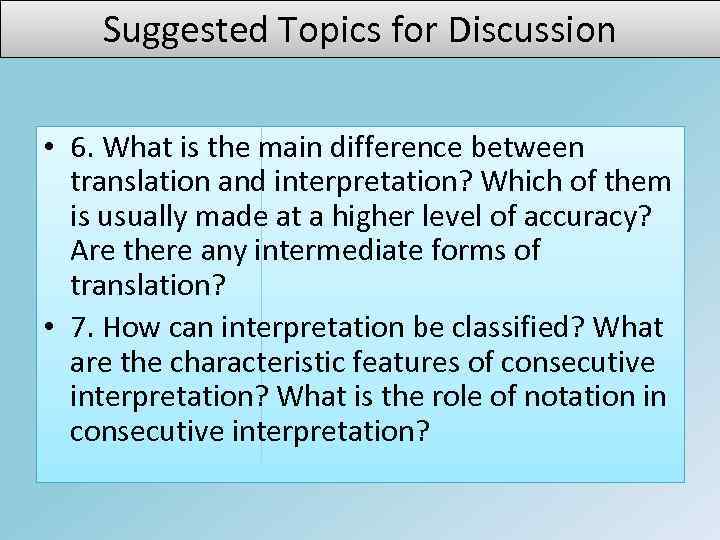 Different types of translation can be singled out depending on the predominant communicative function of the source text or the form of speech involved in the translation process. Thus, we can distinguish Types of Translations Literary or written translation Informative translation (or interpretation)

Literary translation deals with… literary texts, i. e. works of fiction or poetry whose main function is to make an emotional or aesthetic impression upon the reader. Their communicative value depends, first and foremost, on their artistic quality and the translator's primary task is to reproduce this quality in translation.

Informative translation is rendering into the target language non -literary texts the main purpose of which is to convey a certain amount of ideas, to inform the reader. However, if the source text is of some length, its translation can be listed as literary or informative only as an approximation

Literary works are known to fall into a number of genres. Literary translations may be subdivided in the same way, as each genre calls for a specific arrangement and makes use of specific artistic means to impress the reader. Translators of prose, poetry or plays have their own problems. Each of these forms of literary activities comprises a number of subgenres and the translator may specialize in one or some of them in accordance with his talents and experience. The particular tasks inherent in the translation of literary works of each genre are more literary than linguistic. The great challenge to the translator is to combine the maximum equivalence and the high literary merit.

A number of subdivisions can be also suggested for informative translations, though the principles of classification here are somewhat different. Here we may single out translations of scientific and technical texts, of newspaper materials, of official papers some other types of texts such as public in that there is a certain balance between the expressive and referential functions, between

Translation of scientific and technical materials has a most important role to play in our age of the revolutionary technical progress In technical translation the main goal is to identify the situation described in the original. The technical translator is also expected to observe the stylistic requirements of scientific and technical materials to make text acceptable to the specialist. It is a great challenge to the translator who must have a good command of the technical terms and a sufficient understanding of the subject matter to be able to give an adequate description of the situation

English newspaper reports differ greatly from their Russian counterparts due to the frequent use of colloquial, slang and vulgar elements, various paraphrases, eye-catching headlines, etc. • Apart from technical and newspaper materials it may be expedient to single out translation of official diplomatic papers as a separate type of informative translation. • Journalistic (or publicistic) texts dealing with social or political matters are sometimes singled out among other informative materials because they may feature elements more commonly used in literary text (metaphors, similes and other stylistic devices) which cannot but influence the translator's strategy. • There also some minor groups of texts that can be considered separately because of the specific problems their translation poses to the translator (they are film scripts, comic strips, commercial advertisements.

Dealing with commercial advertisements he must bear in mind that their sole purpose is to win over the prospective customers in written translation the source text is in written form, as is the target text In oral translation or interpretation the interpreter listens to the oral presentation of the original and translates it as an oral message in TL. • As a result, in the first case the Receptor of the translation can read it • while in the second case he hears it.

The conditions of oral translation impose a number of important restrictions on the translator's performance. . Here the interpreter receives a fragment of the original only once and for a short period of time. His translation is also a one-time act with no possibility of any return to the original or any subsequent corrections This creates additional problems and the users have sometimes; to be content with a lower level of equivalence.

TYPES AND LEVELS OF EQUIVALENCE Lectures # 4