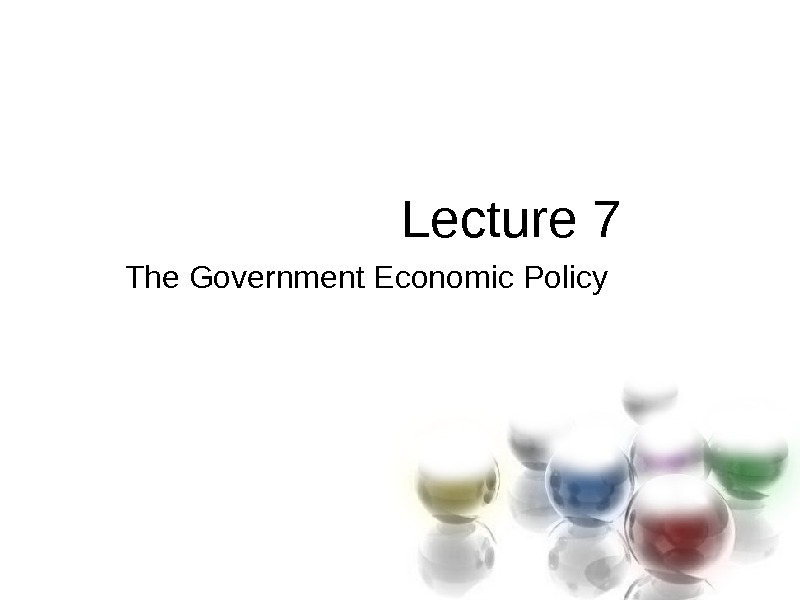 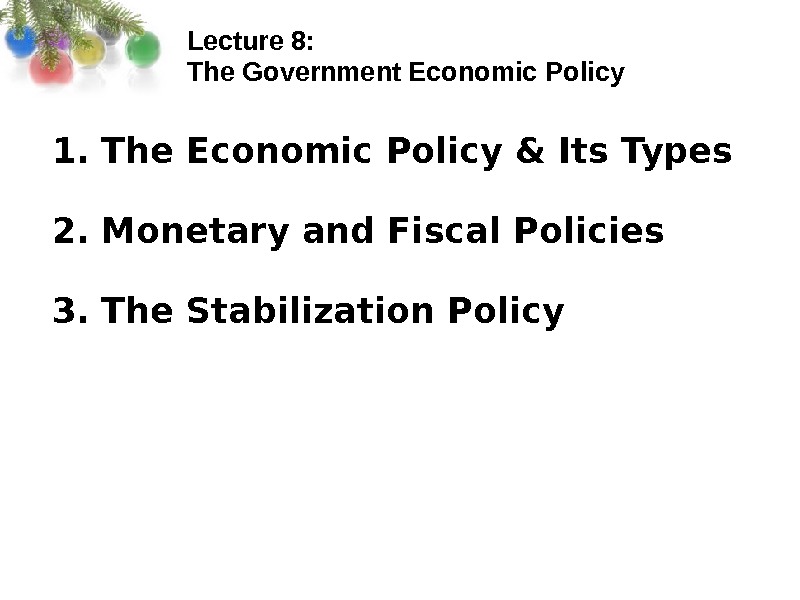 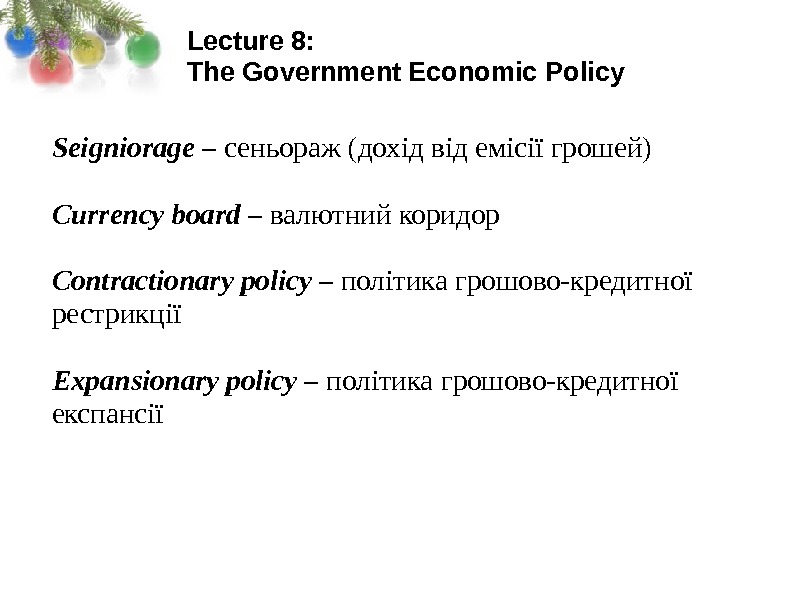 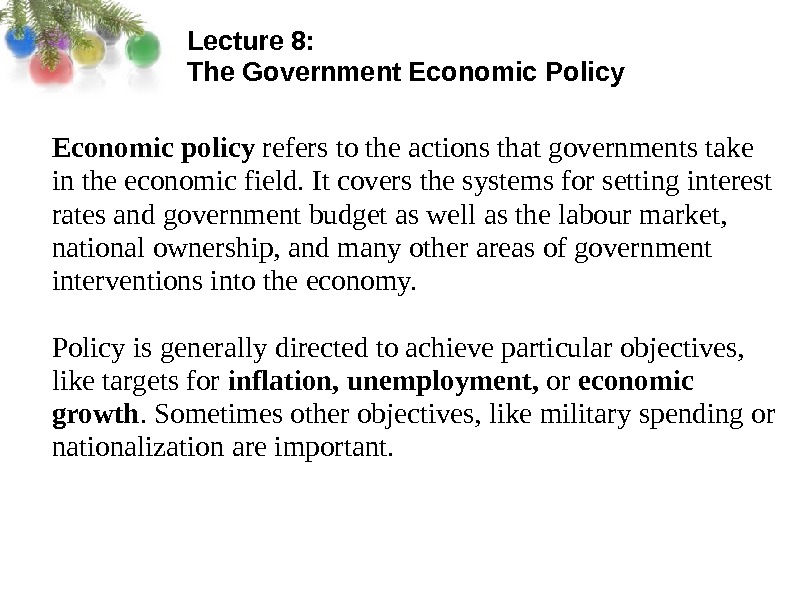 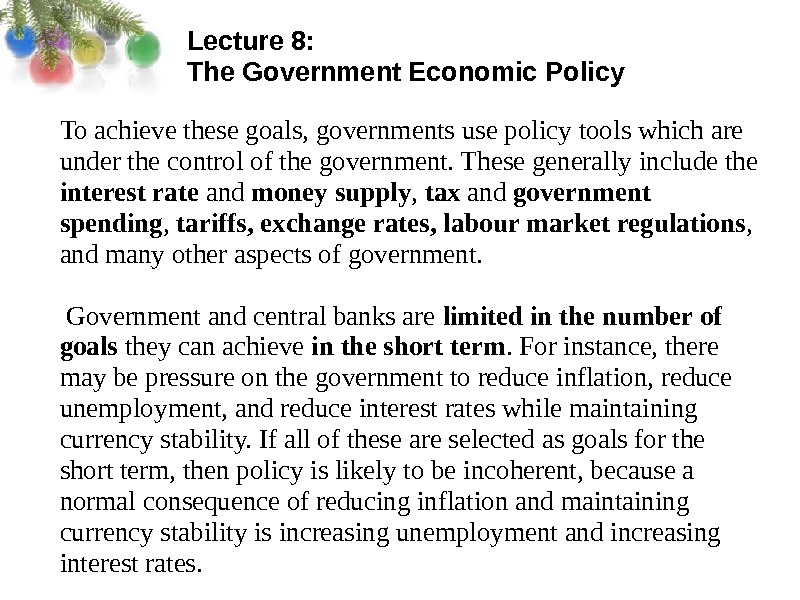 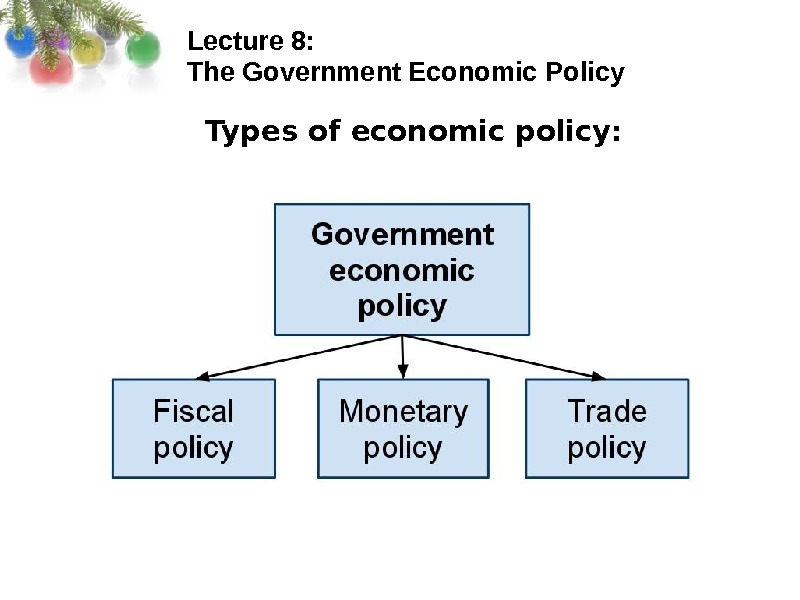 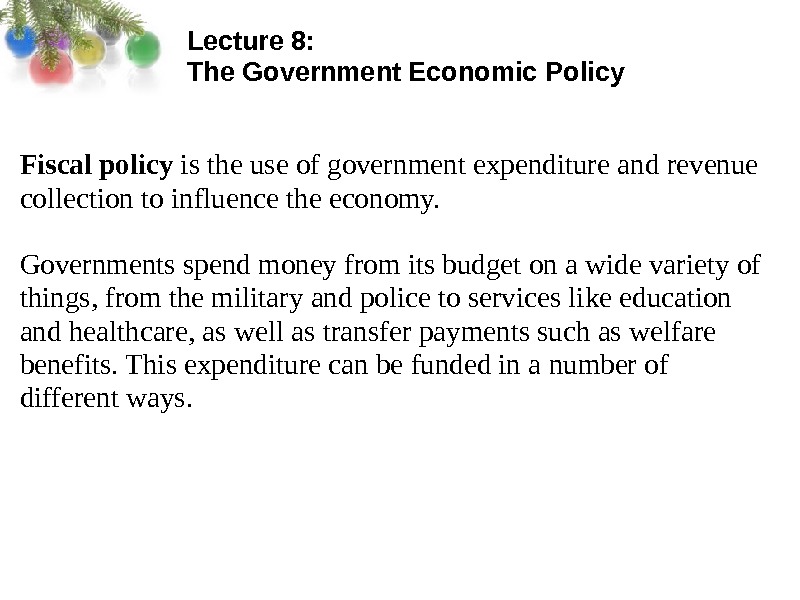 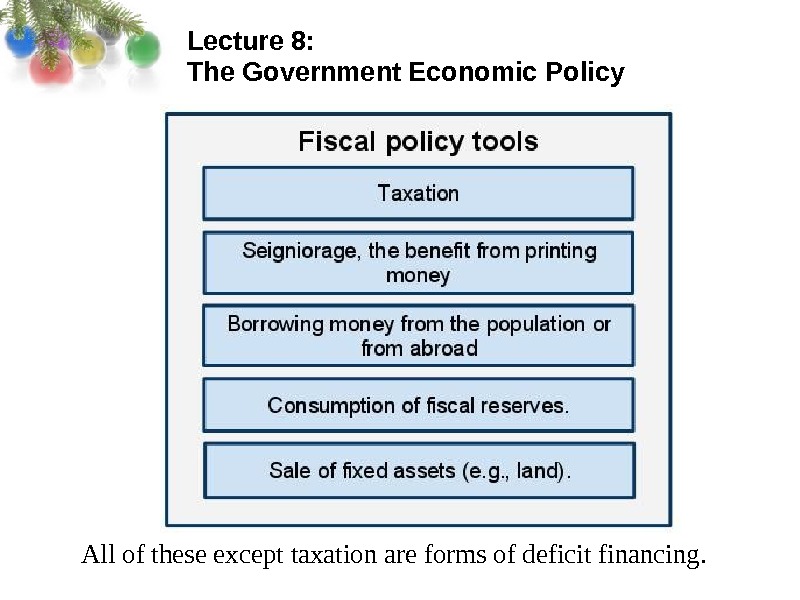 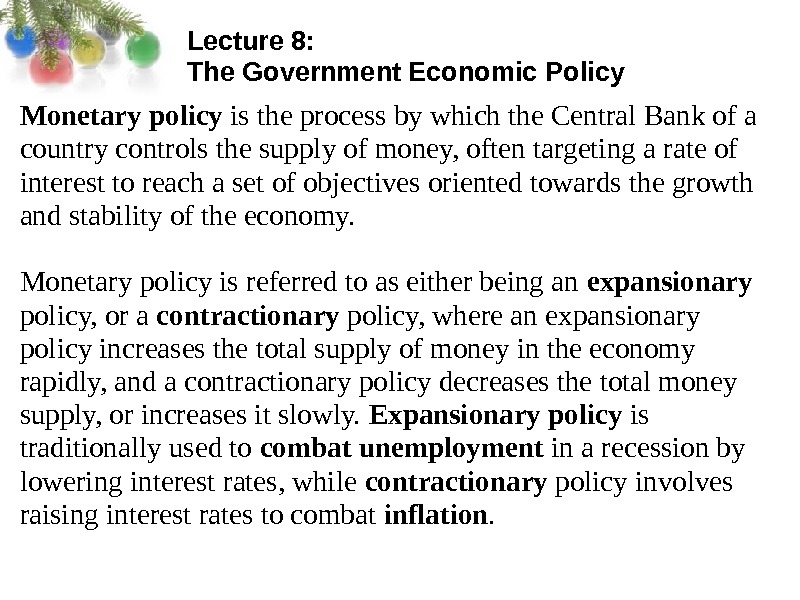 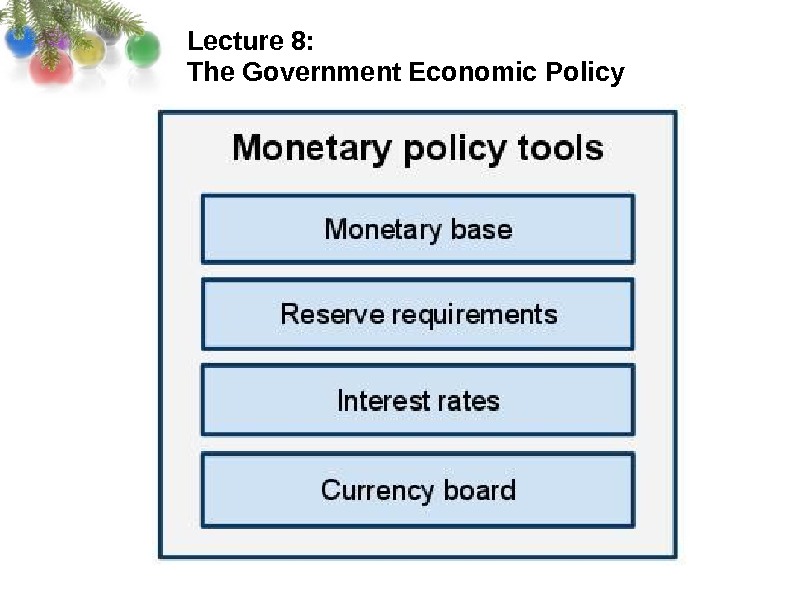 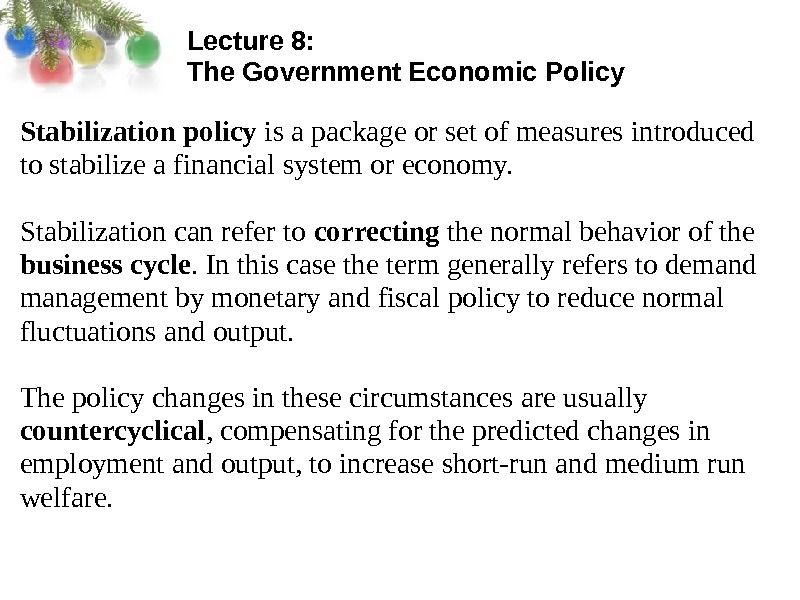 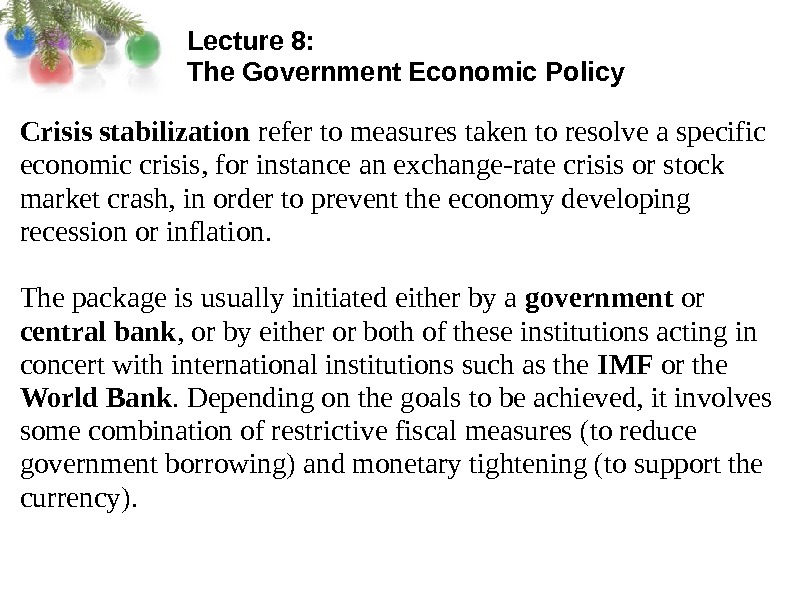 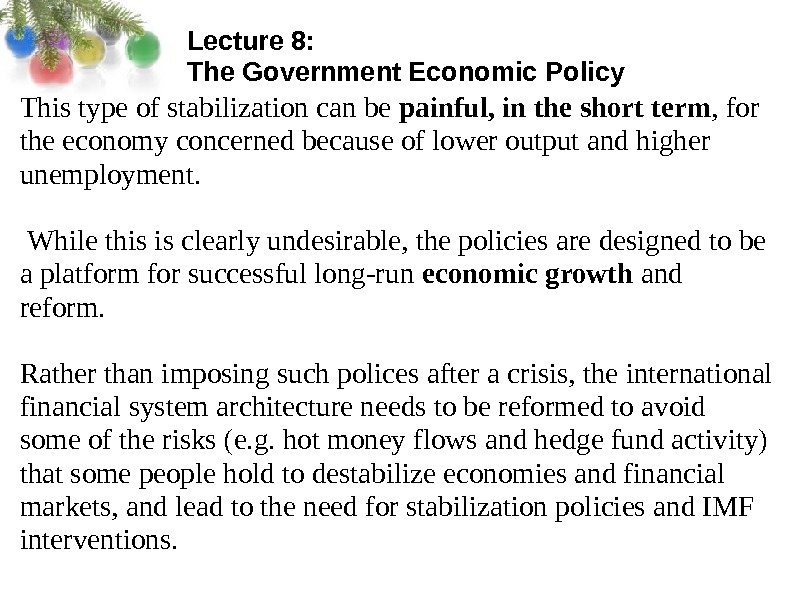 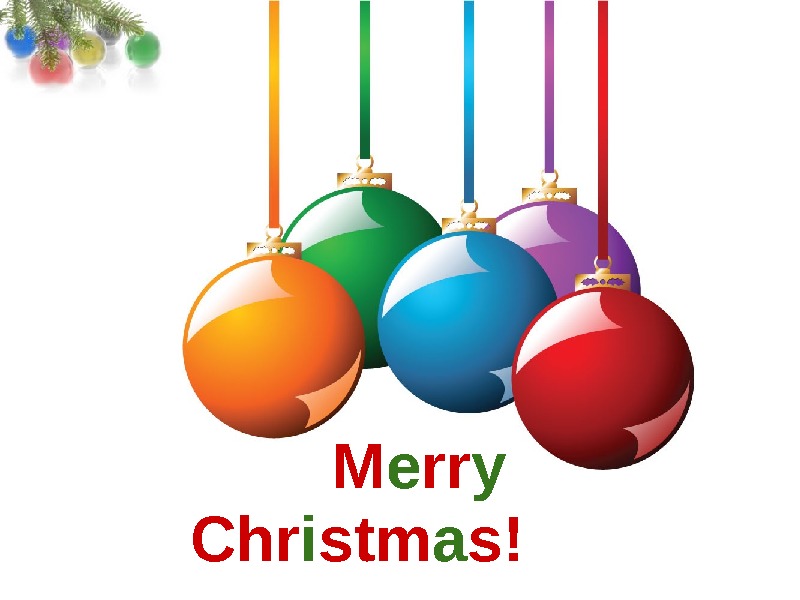 Lecture 8: The Government Economic Policy Economic policy refers to the actions that governments take in the economic field. It covers the systems for setting interest rates and government budget as well as the labour market, national ownership, and many other areas of government interventions into the economy. Policy is generally directed to achieve particular objectives, like targets for inflation, unemployment, or economic growth. Sometimes other objectives, like military spending or nationalization are important.

Lecture 8: The Government Economic Policy To achieve these goals, governments use policy tools which are under the control of the government. These generally include the interest rate and money supply , tax and government spending , tariffs, exchange rates, labour market regulations , and many other aspects of government. Government and central banks are limited in the number of goals they can achieve in the short term. For instance, there may be pressure on the government to reduce inflation, reduce unemployment, and reduce interest rates while maintaining currency stability. If all of these are selected as goals for the short term, then policy is likely to be incoherent, because a normal consequence of reducing inflation and maintaining currency stability is increasing unemployment and increasing interest rates.

Lecture 8: The Government Economic Policy Fiscal policy is the use of government expenditure and revenue collection to influence the economy. Governments spend money from its budget on a wide variety of things, from the military and police to services like education and healthcare, as well as transfer payments such as welfare benefits. This expenditure can be funded in a number of different ways.

Lecture 8: The Government Economic Policy All of these except taxation are forms of deficit financing.

Lecture 8: The Government Economic Policy Stabilization policy is a package or set of measures introduced to stabilize a financial system or economy. Stabilization can refer to correcting the normal behavior of the business cycle. In this case the term generally refers to demand management by monetary and fiscal policy to reduce normal fluctuations and output. The policy changes in these circumstances are usually countercyclical , compensating for the predicted changes in employment and output, to increase short-run and medium run welfare.

Lecture 8: The Government Economic Policy Crisis stabilization refer to measures taken to resolve a specific economic crisis, for instance an exchange-rate crisis or stock market crash, in order to prevent the economy developing recession or inflation. The package is usually initiated either by a government or central bank , or by either or both of these institutions acting in concert with international institutions such as the IMF or the World Bank. Depending on the goals to be achieved, it involves some combination of restrictive fiscal measures (to reduce government borrowing) and monetary tightening (to support the currency).

Lecture 8: The Government Economic Policy This type of stabilization can be painful, in the short term , for the economy concerned because of lower output and higher unemployment. While this is clearly undesirable, the policies are designed to be a platform for successful long-run economic growth and reform. Rather than imposing such polices after a crisis, the international financial system architecture needs to be reformed to avoid some of the risks (e. g. hot money flows and hedge fund activity) that some people hold to destabilize economies and financial markets, and lead to the need for stabilization policies and IMF interventions.