Learning Goals The Students will understand the 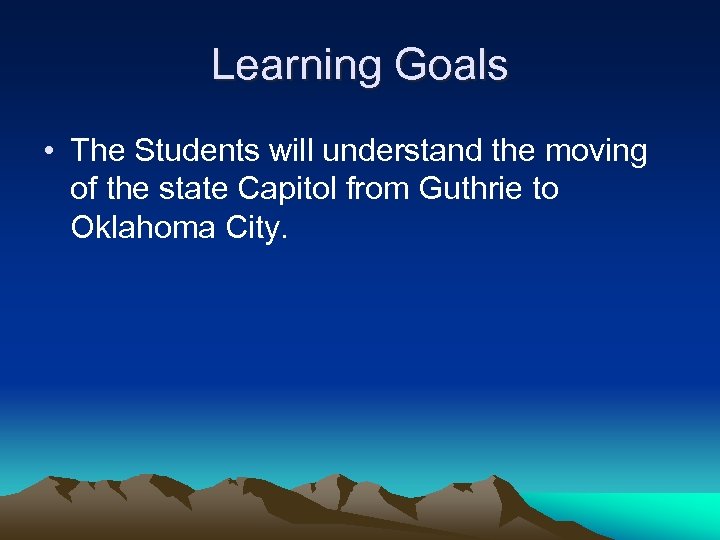 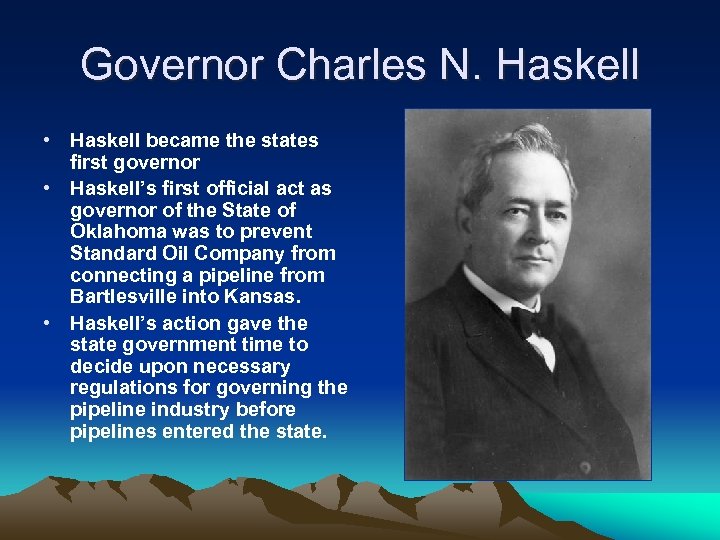 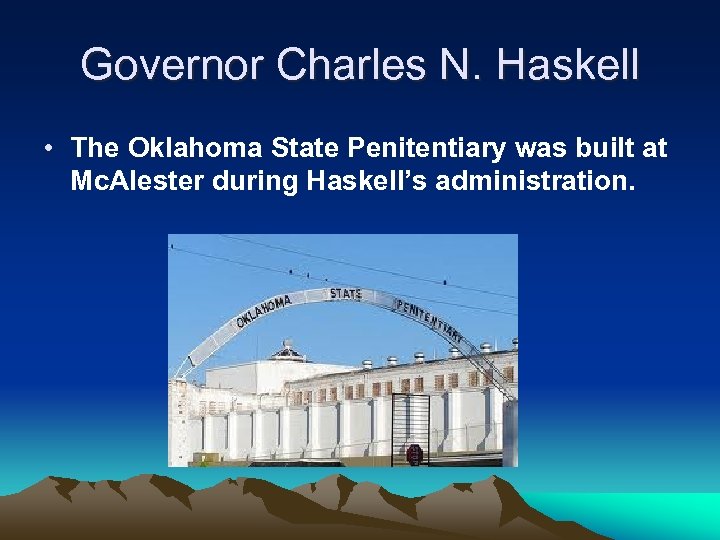 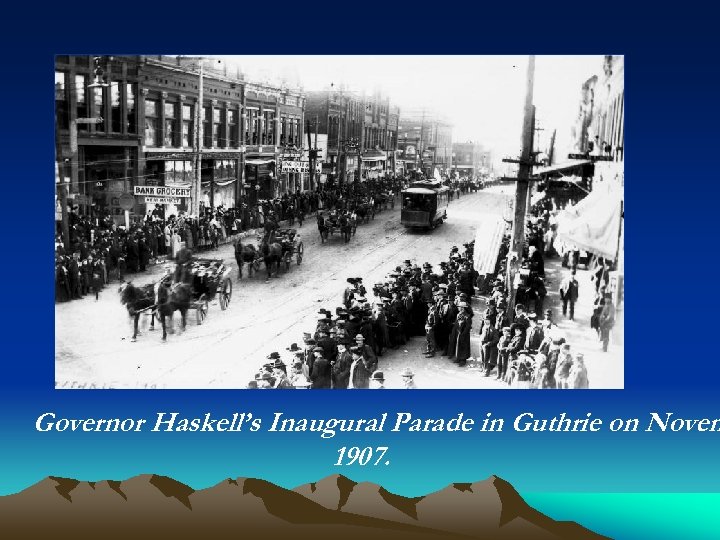 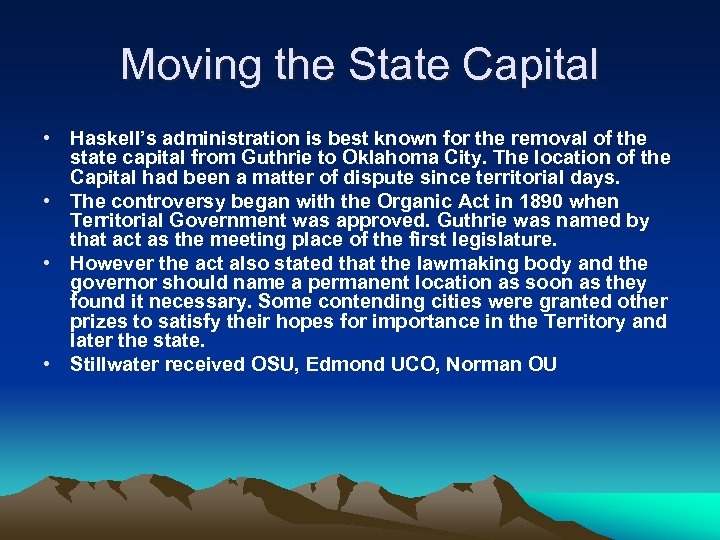 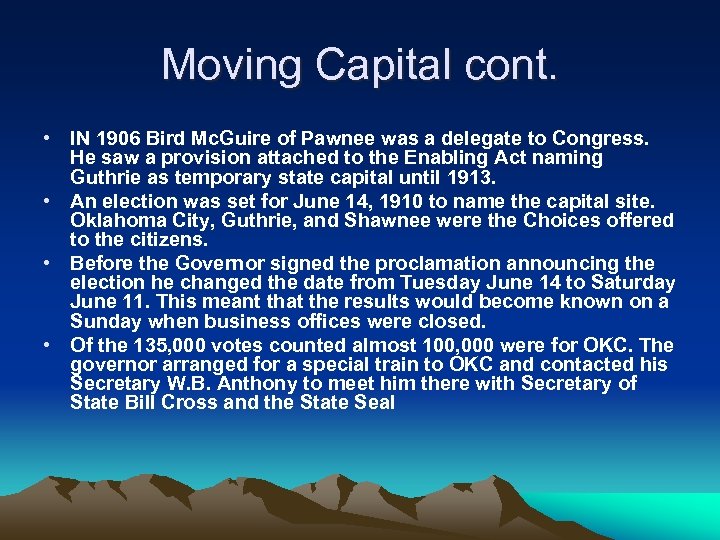 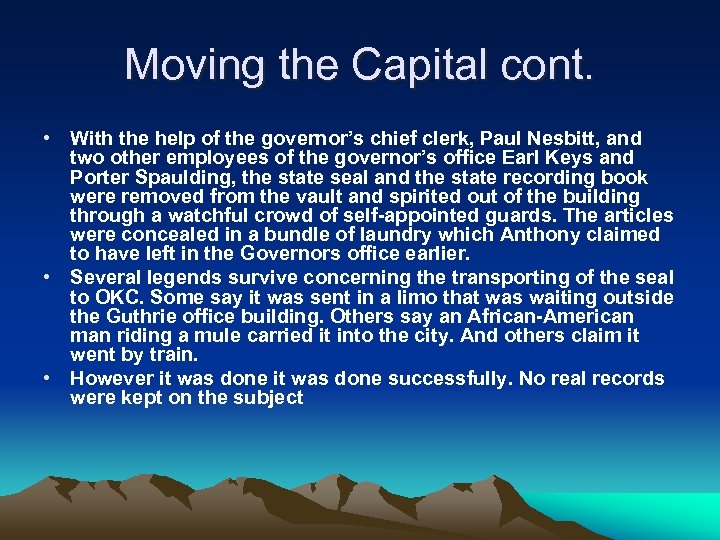 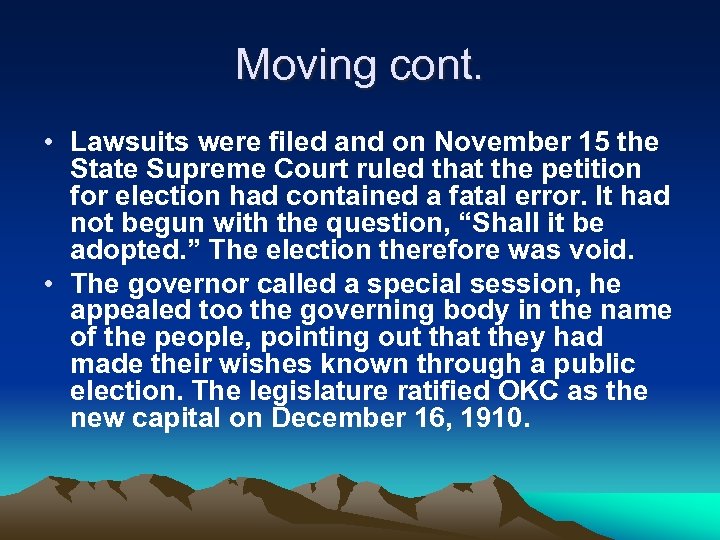 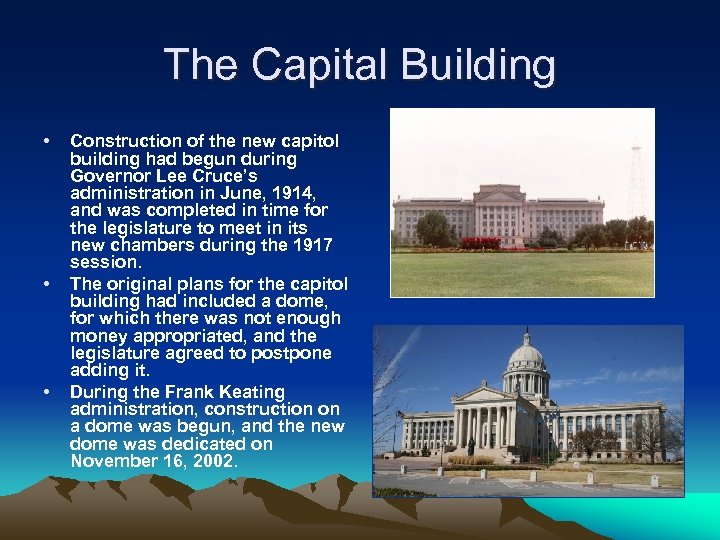 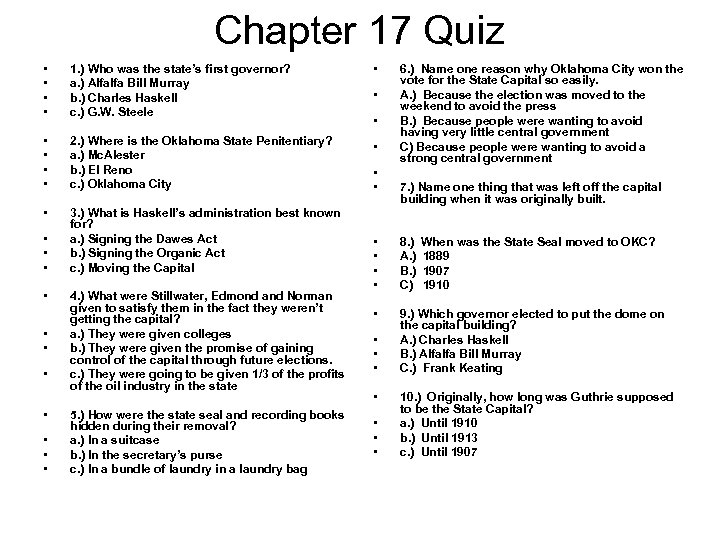 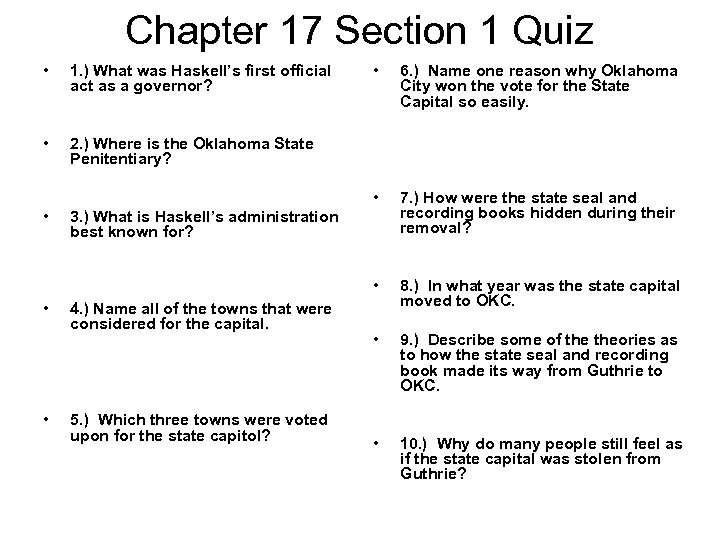 Скачать презентацию Learning Goals The Students will understand the

Learning Goals • The Students will understand the moving of the state Capitol from Guthrie to Oklahoma City.

Governor Charles N. Haskell • Haskell became the states first governor • Haskell’s first official act as governor of the State of Oklahoma was to prevent Standard Oil Company from connecting a pipeline from Bartlesville into Kansas. • Haskell’s action gave the state government time to decide upon necessary regulations for governing the pipeline industry before pipelines entered the state.

Moving the State Capital • Haskell’s administration is best known for the removal of the state capital from Guthrie to Oklahoma City. The location of the Capital had been a matter of dispute since territorial days. • The controversy began with the Organic Act in 1890 when Territorial Government was approved. Guthrie was named by that act as the meeting place of the first legislature. • However the act also stated that the lawmaking body and the governor should name a permanent location as soon as they found it necessary. Some contending cities were granted other prizes to satisfy their hopes for importance in the Territory and later the state. • Stillwater received OSU, Edmond UCO, Norman OU

Moving Capital cont. • IN 1906 Bird Mc. Guire of Pawnee was a delegate to Congress. He saw a provision attached to the Enabling Act naming Guthrie as temporary state capital until 1913. • An election was set for June 14, 1910 to name the capital site. Oklahoma City, Guthrie, and Shawnee were the Choices offered to the citizens. • Before the Governor signed the proclamation announcing the election he changed the date from Tuesday June 14 to Saturday June 11. This meant that the results would become known on a Sunday when business offices were closed. • Of the 135, 000 votes counted almost 100, 000 were for OKC. The governor arranged for a special train to OKC and contacted his Secretary W. B. Anthony to meet him there with Secretary of State Bill Cross and the State Seal

Moving the Capital cont. • With the help of the governor’s chief clerk, Paul Nesbitt, and two other employees of the governor’s office Earl Keys and Porter Spaulding, the state seal and the state recording book were removed from the vault and spirited out of the building through a watchful crowd of self-appointed guards. The articles were concealed in a bundle of laundry which Anthony claimed to have left in the Governors office earlier. • Several legends survive concerning the transporting of the seal to OKC. Some say it was sent in a limo that was waiting outside the Guthrie office building. Others say an African-American man riding a mule carried it into the city. And others claim it went by train. • However it was done successfully. No real records were kept on the subject

Moving cont. • Lawsuits were filed and on November 15 the State Supreme Court ruled that the petition for election had contained a fatal error. It had not begun with the question, “Shall it be adopted. ” The election therefore was void. • The governor called a special session, he appealed too the governing body in the name of the people, pointing out that they had made their wishes known through a public election. The legislature ratified OKC as the new capital on December 16, 1910.

The Capital Building • • • Construction of the new capitol building had begun during Governor Lee Cruce’s administration in June, 1914, and was completed in time for the legislature to meet in its new chambers during the 1917 session. The original plans for the capitol building had included a dome, for which there was not enough money appropriated, and the legislature agreed to postpone adding it. During the Frank Keating administration, construction on a dome was begun, and the new dome was dedicated on November 16, 2002.

Chapter 17 Quiz • • 1. ) Who was the state’s first governor? a. ) Alfalfa Bill Murray b. ) Charles Haskell c. ) G. W. Steele • • • 2. ) Where is the Oklahoma State Penitentiary? a. ) Mc. Alester b. ) El Reno c. ) Oklahoma City • • 3. ) What is Haskell’s administration best known for? a. ) Signing the Dawes Act b. ) Signing the Organic Act c. ) Moving the Capital • • • 4. ) What were Stillwater, Edmond and Norman given to satisfy them in the fact they weren’t getting the capital? a. ) They were given colleges b. ) They were given the promise of gaining control of the capital through future elections. c. ) They were going to be given 1/3 of the profits of the oil industry in the state 5. ) How were the state seal and recording books hidden during their removal? a. ) In a suitcase b. ) In the secretary’s purse c. ) In a bundle of laundry in a laundry bag • • 6. ) Name one reason why Oklahoma City won the vote for the State Capital so easily. A. ) Because the election was moved to the weekend to avoid the press B. ) Because people were wanting to avoid having very little central government C) Because people were wanting to avoid a strong central government 7. ) Name one thing that was left off the capital building when it was originally built. • • 8. ) A. ) B. ) C) • 9. ) Which governor elected to put the dome on the capital building? A. ) Charles Haskell B. ) Alfalfa Bill Murray C. ) Frank Keating • • When was the State Seal moved to OKC? 1889 1907 1910 10. ) Originally, how long was Guthrie supposed to be the State Capital? a. ) Until 1910 b. ) Until 1913 c. ) Until 1907

Chapter 17 Section 1 Quiz • 1. ) What was Haskell’s first official act as a governor? • 2. ) Where is the Oklahoma State Penitentiary? • 7. ) How were the state seal and recording books hidden during their removal? • • 6. ) Name one reason why Oklahoma City won the vote for the State Capital so easily. • • • 8. ) In what year was the state capital moved to OKC. • 9. ) Describe some of theories as to how the state seal and recording book made its way from Guthrie to OKC. • 10. ) Why do many people still feel as if the state capital was stolen from Guthrie? 3. ) What is Haskell’s administration best known for? 4. ) Name all of the towns that were considered for the capital. 5. ) Which three towns were voted upon for the state capitol?