Learn them Practice them Master them OWN THEM 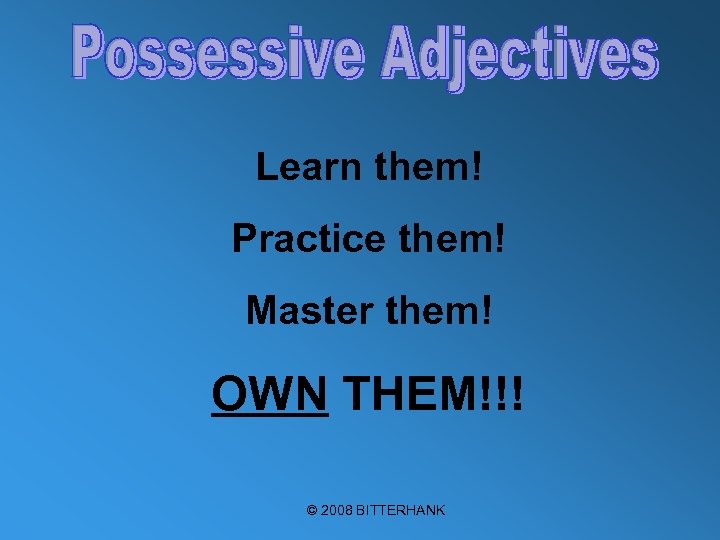 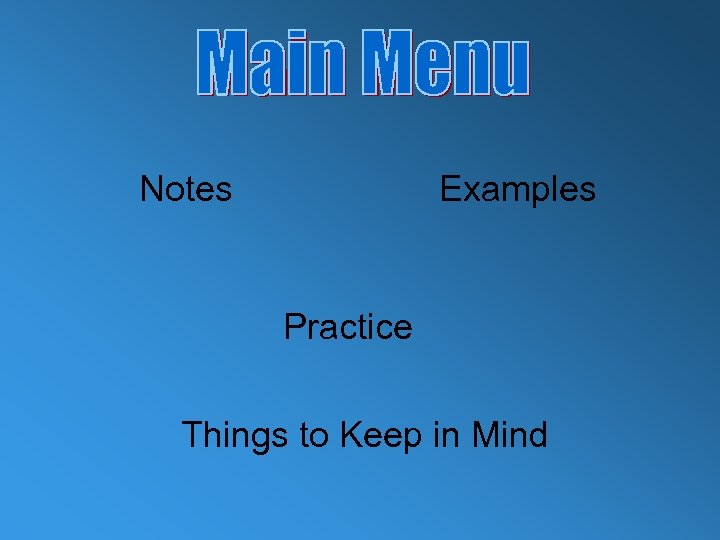 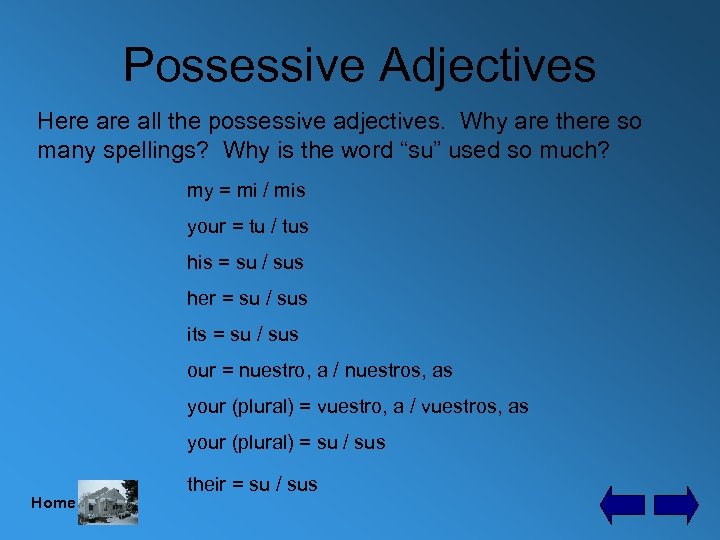 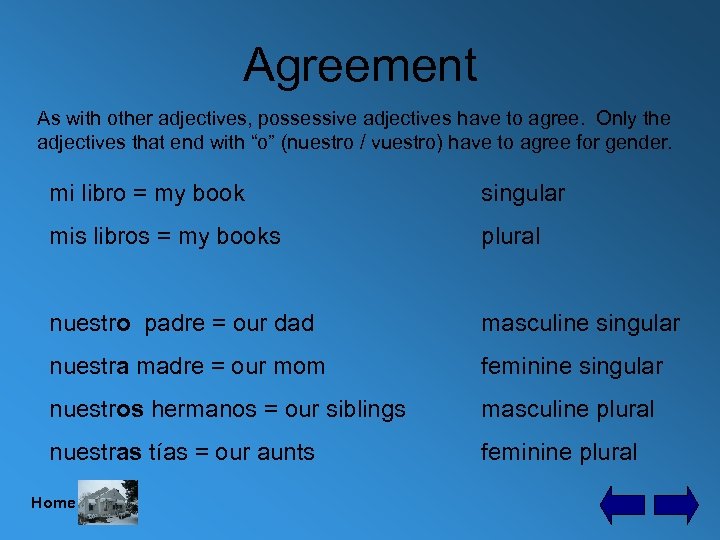 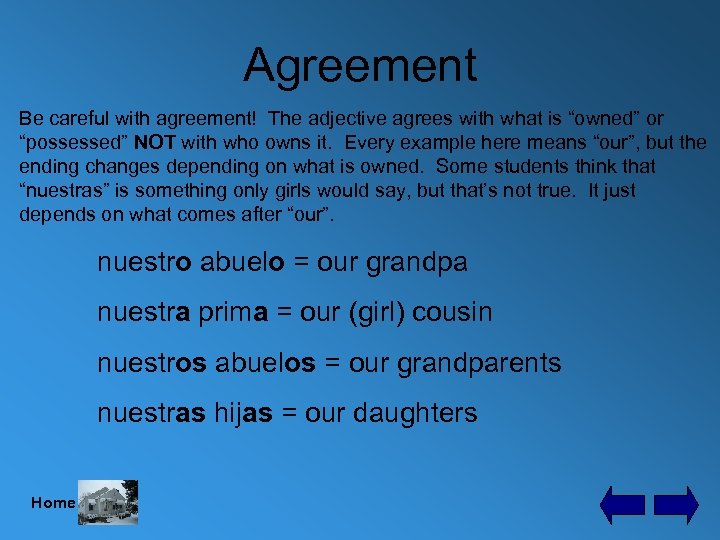 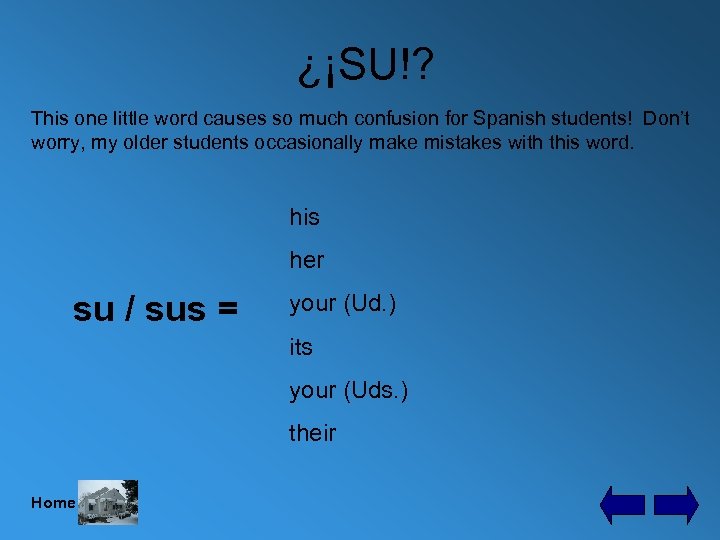 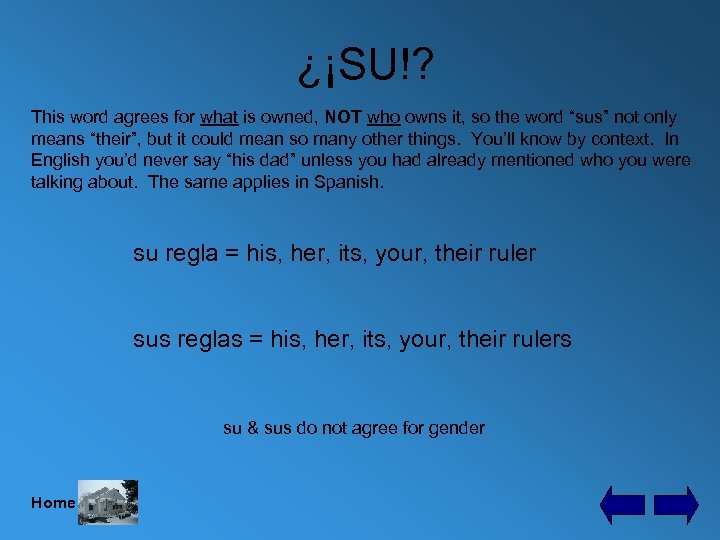 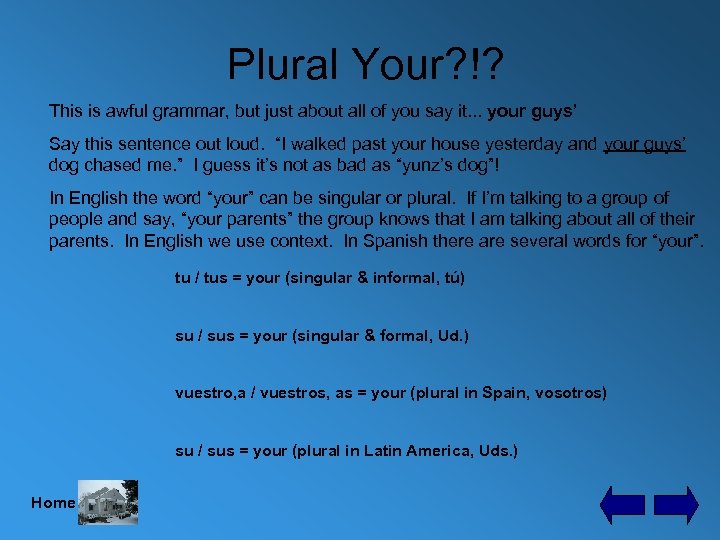 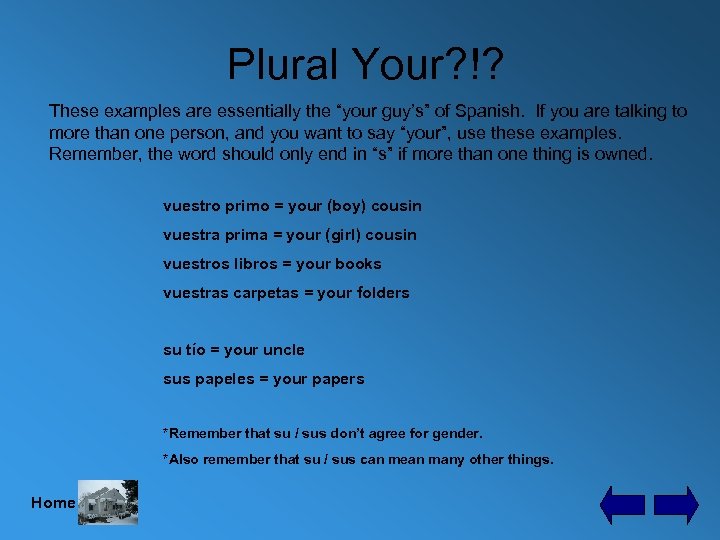 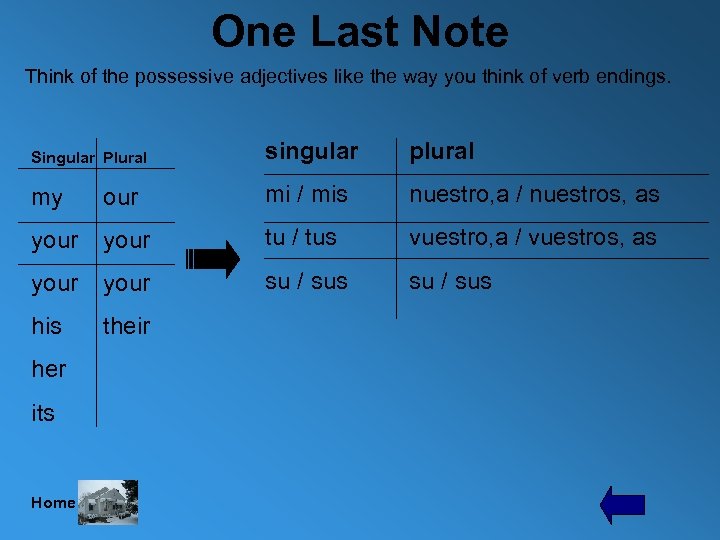 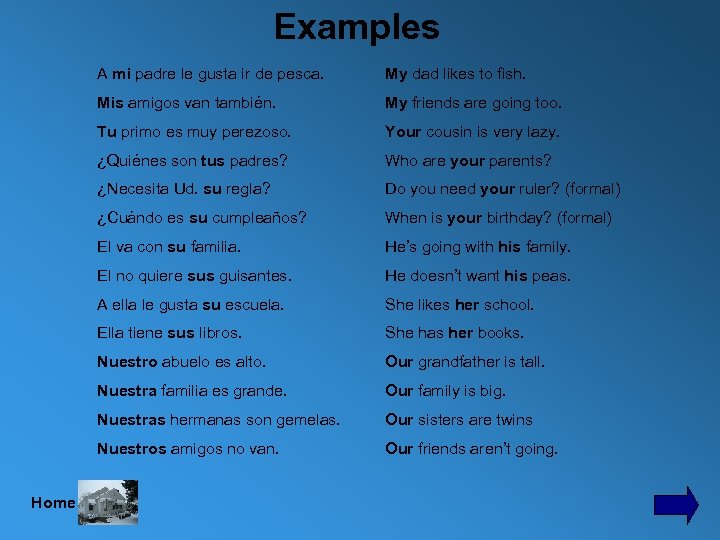 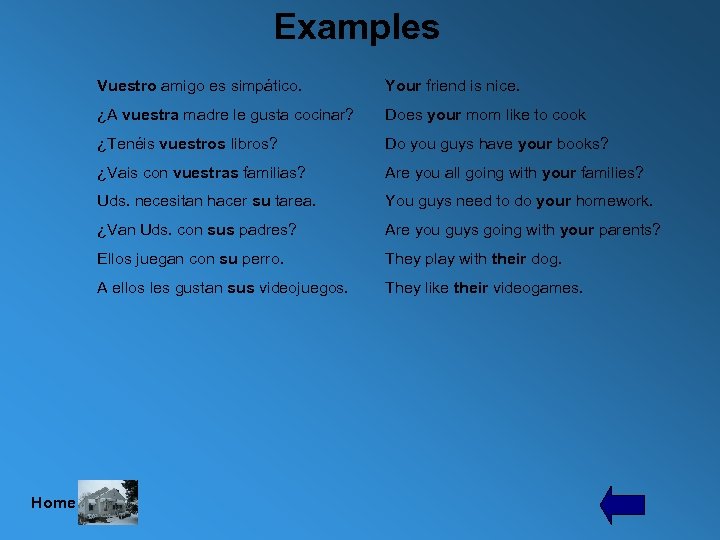 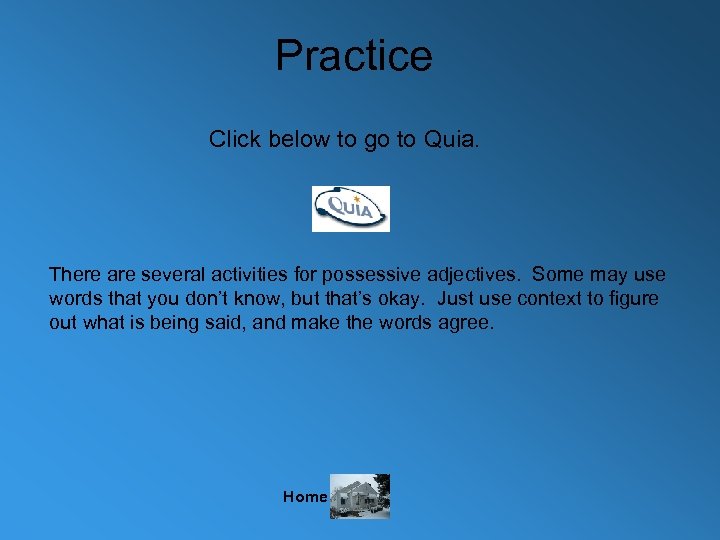 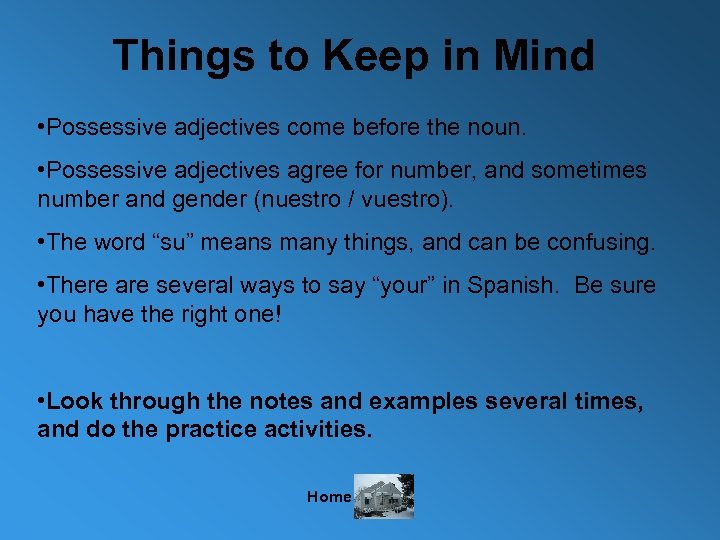 Скачать презентацию Learn them Practice them Master them OWN THEM

Possessive Adjectives Possessive adjectives in English are words such as “my”, “your”, or “their”. In Spanish these words come before the noun too. You’ve seen “mi amigo” and “tus padres” before. These mean “my” and “your”, but why are they spelled this way? What are the other possessive adjectives? Home

Agreement Be careful with agreement! The adjective agrees with what is “owned” or “possessed” NOT with who owns it. Every example here means “our”, but the ending changes depending on what is owned. Some students think that “nuestras” is something only girls would say, but that’s not true. It just depends on what comes after “our”. nuestro abuelo = our grandpa nuestra prima = our (girl) cousin nuestros abuelos = our grandparents nuestras hijas = our daughters Home

¿¡SU!? This one little word causes so much confusion for Spanish students! Don’t worry, my older students occasionally make mistakes with this word. his her su / sus = your (Ud. ) its your (Uds. ) their Home

¿¡SU!? This word agrees for what is owned, NOT who owns it, so the word “sus” not only means “their”, but it could mean so many other things. You’ll know by context. In English you’d never say “his dad” unless you had already mentioned who you were talking about. The same applies in Spanish. su regla = his, her, its, your, their ruler sus reglas = his, her, its, your, their rulers su & sus do not agree for gender Home

Plural Your? !? This is awful grammar, but just about all of you say it. . . your guys’ Say this sentence out loud. “I walked past your house yesterday and your guys’ dog chased me. ” I guess it’s not as bad as “yunz’s dog”! In English the word “your” can be singular or plural. If I’m talking to a group of people and say, “your parents” the group knows that I am talking about all of their parents. In English we use context. In Spanish there are several words for “your”. tu / tus = your (singular & informal, tú) su / sus = your (singular & formal, Ud. ) vuestro, a / vuestros, as = your (plural in Spain, vosotros) su / sus = your (plural in Latin America, Uds. ) Home

Plural Your? !? These examples are essentially the “your guy’s” of Spanish. If you are talking to more than one person, and you want to say “your”, use these examples. Remember, the word should only end in “s” if more than one thing is owned. vuestro primo = your (boy) cousin vuestra prima = your (girl) cousin vuestros libros = your books vuestras carpetas = your folders su tío = your uncle sus papeles = your papers *Remember that su / sus don’t agree for gender. *Also remember that su / sus can mean many other things. Home

One Last Note Think of the possessive adjectives like the way you think of verb endings. Singular Plural singular plural my our mi / mis nuestro, a / nuestros, as your tu / tus vuestro, a / vuestros, as your su / sus his their her its Home

Examples Vuestro amigo es simpático. ¿A vuestra madre le gusta cocinar? Does your mom like to cook ¿Tenéis vuestros libros? Do you guys have your books? ¿Vais con vuestras familias? Are you all going with your families? Uds. necesitan hacer su tarea. You guys need to do your homework. ¿Van Uds. con sus padres? Are you guys going with your parents? Ellos juegan con su perro. They play with their dog. A ellos les gustan sus videojuegos. Home Your friend is nice. They like their videogames.

Practice Click below to go to Quia. There are several activities for possessive adjectives. Some may use words that you don’t know, but that’s okay. Just use context to figure out what is being said, and make the words agree. Home

Things to Keep in Mind • Possessive adjectives come before the noun. • Possessive adjectives agree for number, and sometimes number and gender (nuestro / vuestro). • The word “su” means many things, and can be confusing. • There are several ways to say “your” in Spanish. Be sure you have the right one! • Look through the notes and examples several times, and do the practice activities. Home