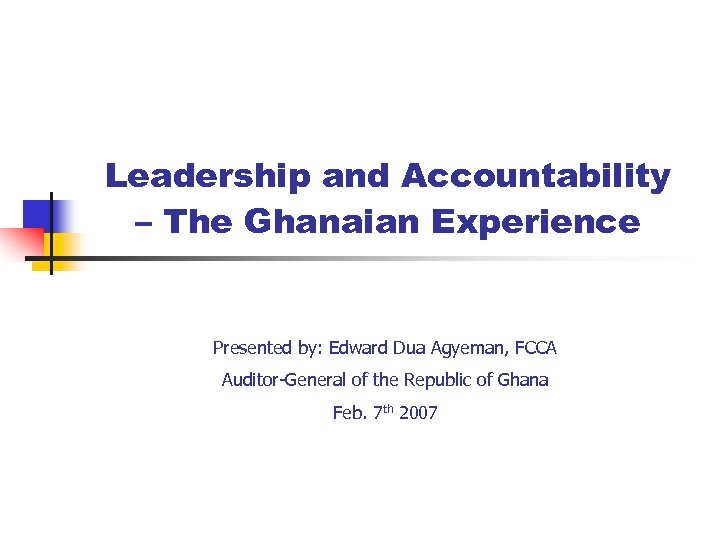 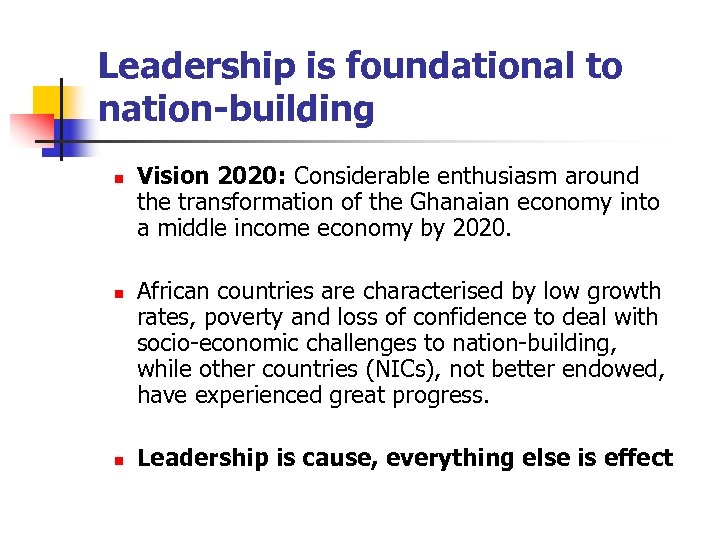 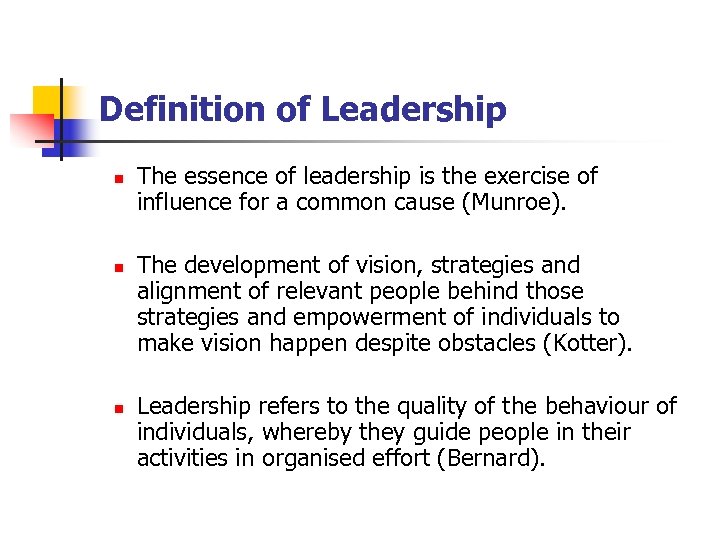 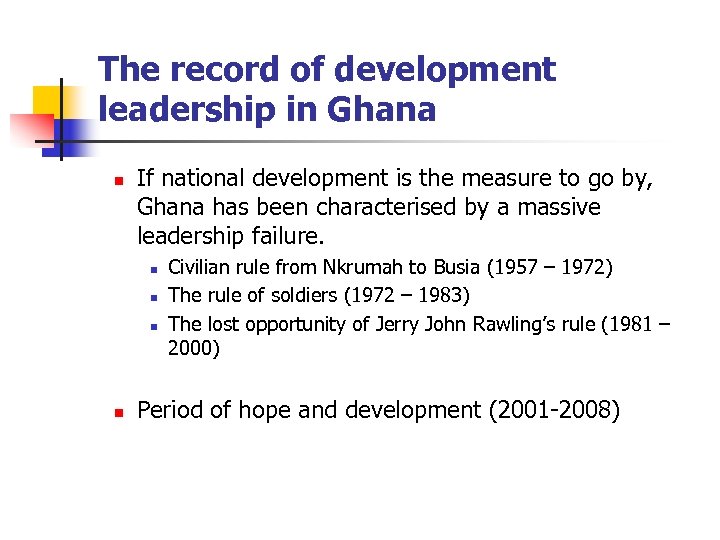 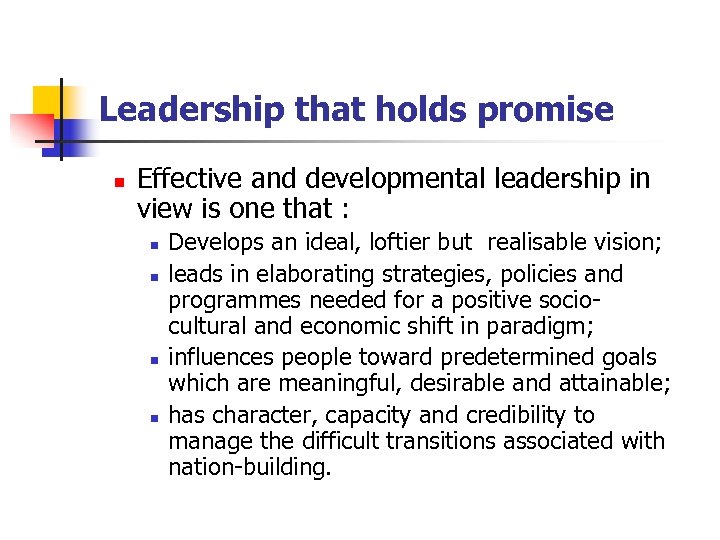 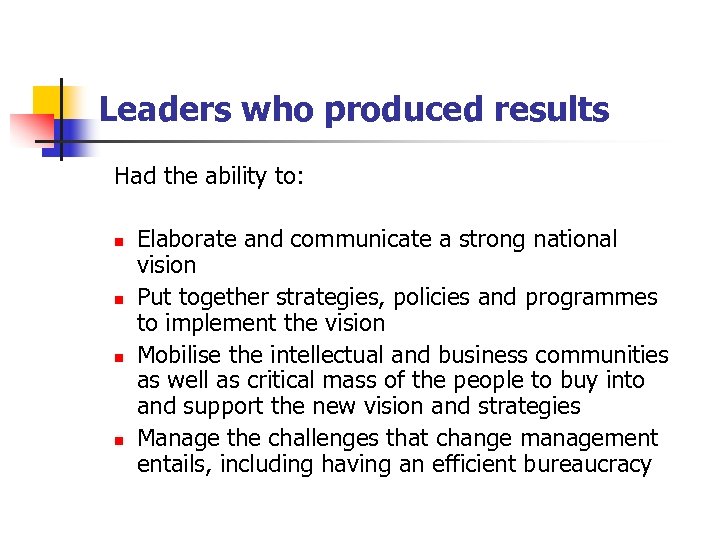 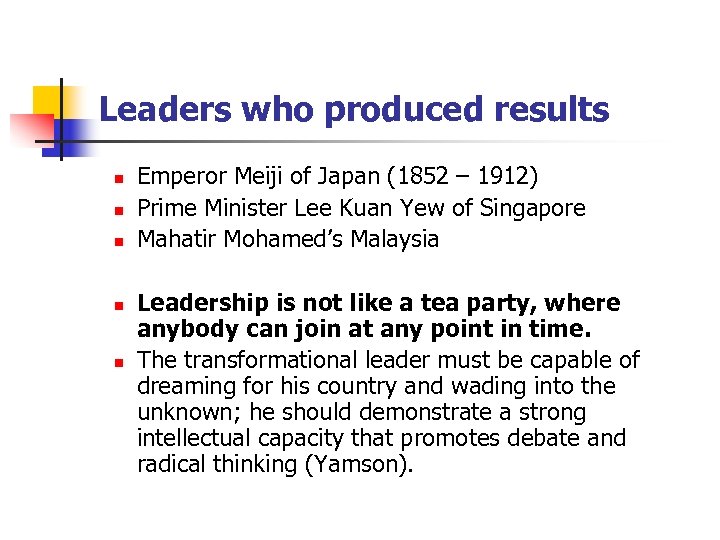 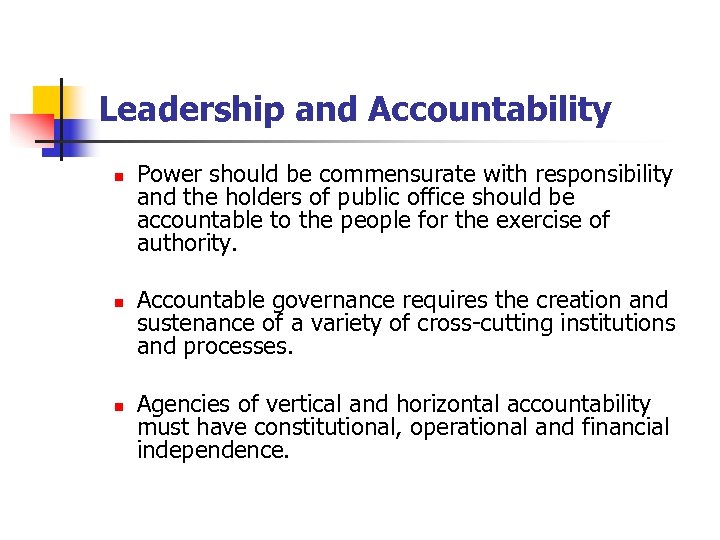 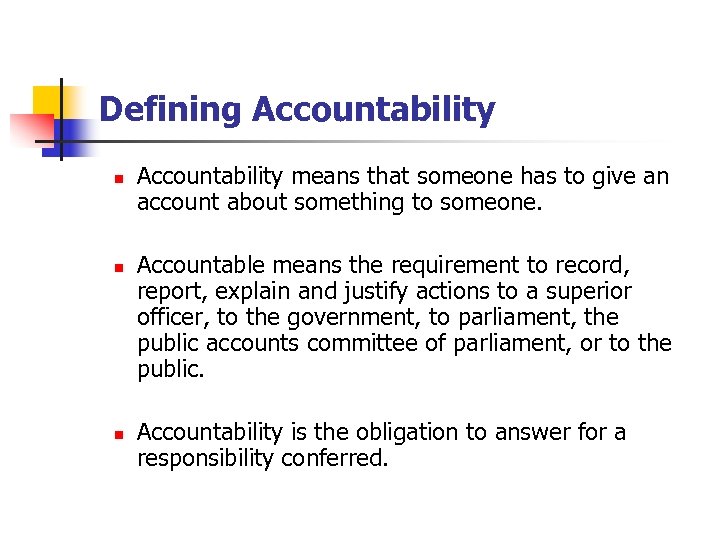 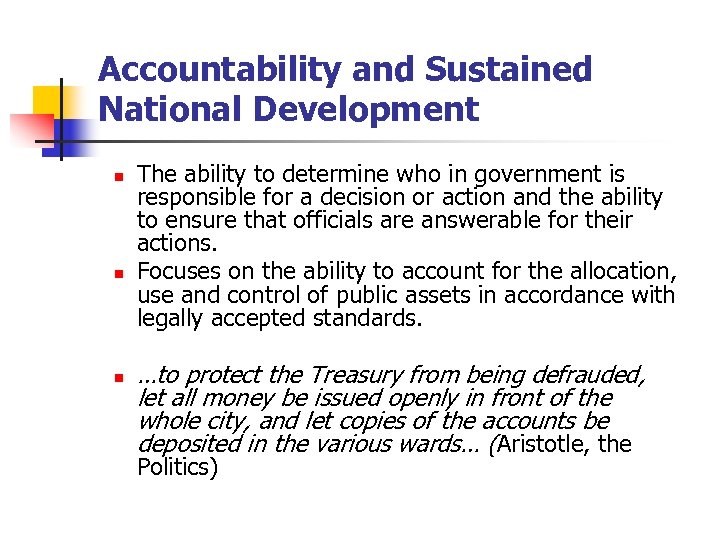 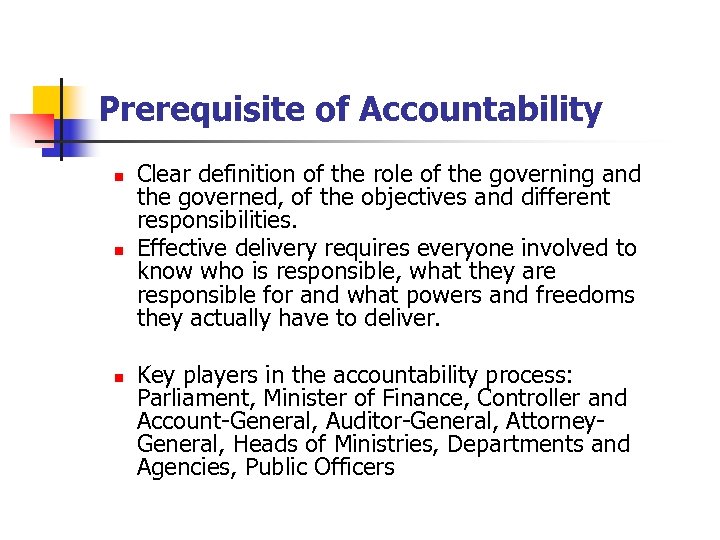 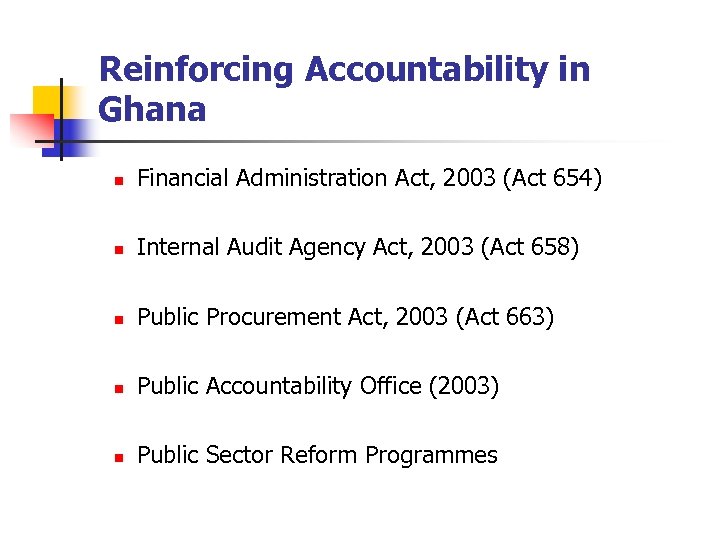 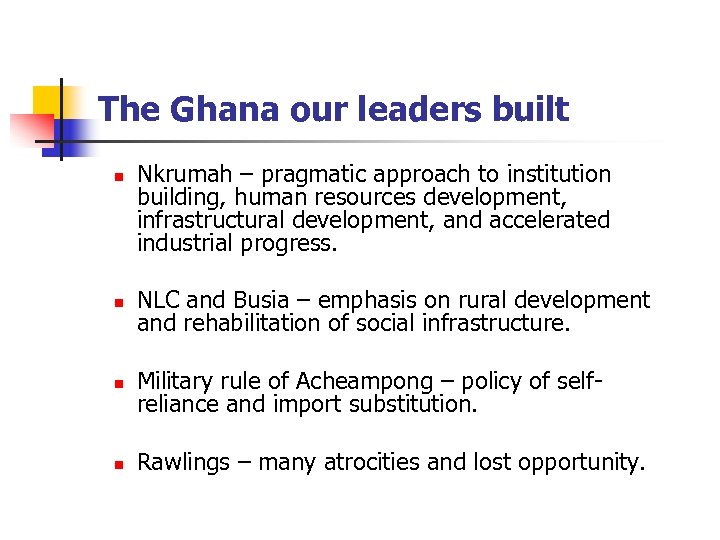 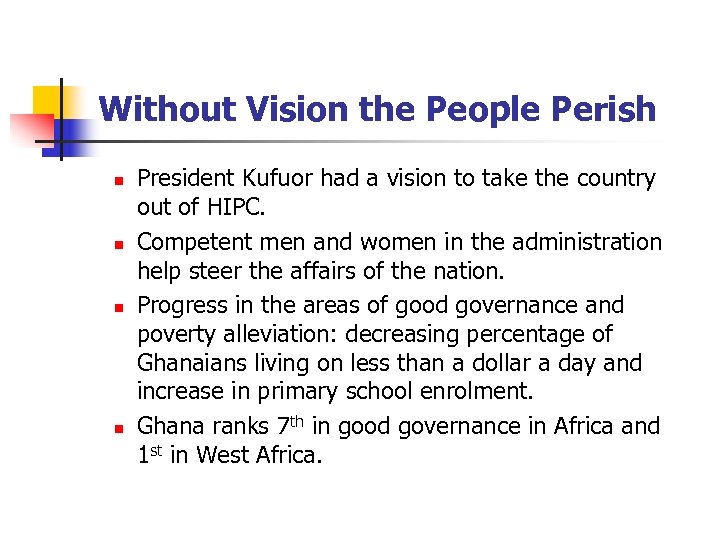 Leadership and Accountability – The Ghanaian Experience Presented by: Edward Dua Agyeman, FCCA Auditor-General of the Republic of Ghana Feb. 7 th 2007

Leadership is foundational to nation-building n n n Vision 2020: Considerable enthusiasm around the transformation of the Ghanaian economy into a middle income economy by 2020. African countries are characterised by low growth rates, poverty and loss of confidence to deal with socio-economic challenges to nation-building, while other countries (NICs), not better endowed, have experienced great progress. Leadership is cause, everything else is effect

Definition of Leadership n n n The essence of leadership is the exercise of influence for a common cause (Munroe). The development of vision, strategies and alignment of relevant people behind those strategies and empowerment of individuals to make vision happen despite obstacles (Kotter). Leadership refers to the quality of the behaviour of individuals, whereby they guide people in their activities in organised effort (Bernard).

Leadership that holds promise n Effective and developmental leadership in view is one that : n n Develops an ideal, loftier but realisable vision; leads in elaborating strategies, policies and programmes needed for a positive sociocultural and economic shift in paradigm; influences people toward predetermined goals which are meaningful, desirable and attainable; has character, capacity and credibility to manage the difficult transitions associated with nation-building.

Leaders who produced results Had the ability to: n n Elaborate and communicate a strong national vision Put together strategies, policies and programmes to implement the vision Mobilise the intellectual and business communities as well as critical mass of the people to buy into and support the new vision and strategies Manage the challenges that change management entails, including having an efficient bureaucracy

Leaders who produced results n n n Emperor Meiji of Japan (1852 – 1912) Prime Minister Lee Kuan Yew of Singapore Mahatir Mohamed’s Malaysia Leadership is not like a tea party, where anybody can join at any point in time. The transformational leader must be capable of dreaming for his country and wading into the unknown; he should demonstrate a strong intellectual capacity that promotes debate and radical thinking (Yamson).

Leadership and Accountability n n n Power should be commensurate with responsibility and the holders of public office should be accountable to the people for the exercise of authority. Accountable governance requires the creation and sustenance of a variety of cross-cutting institutions and processes. Agencies of vertical and horizontal accountability must have constitutional, operational and financial independence.

Defining Accountability n n n Accountability means that someone has to give an account about something to someone. Accountable means the requirement to record, report, explain and justify actions to a superior officer, to the government, to parliament, the public accounts committee of parliament, or to the public. Accountability is the obligation to answer for a responsibility conferred.

Accountability and Sustained National Development n n n The ability to determine who in government is responsible for a decision or action and the ability to ensure that officials are answerable for their actions. Focuses on the ability to account for the allocation, use and control of public assets in accordance with legally accepted standards. …to protect the Treasury from being defrauded, let all money be issued openly in front of the whole city, and let copies of the accounts be deposited in the various wards… (Aristotle, the Politics)

Prerequisite of Accountability n n n Clear definition of the role of the governing and the governed, of the objectives and different responsibilities. Effective delivery requires everyone involved to know who is responsible, what they are responsible for and what powers and freedoms they actually have to deliver. Key players in the accountability process: Parliament, Minister of Finance, Controller and Account-General, Auditor-General, Attorney. General, Heads of Ministries, Departments and Agencies, Public Officers

Without Vision the People Perish n n President Kufuor had a vision to take the country out of HIPC. Competent men and women in the administration help steer the affairs of the nation. Progress in the areas of good governance and poverty alleviation: decreasing percentage of Ghanaians living on less than a dollar a day and increase in primary school enrolment. Ghana ranks 7 th in good governance in Africa and 1 st in West Africa.