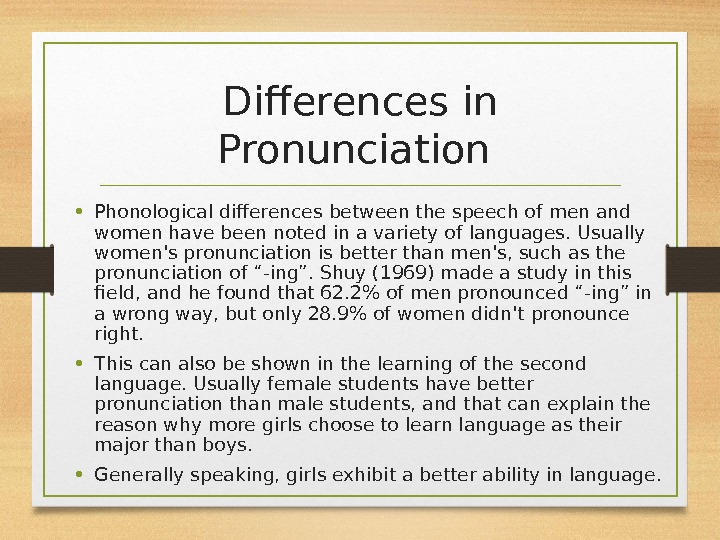 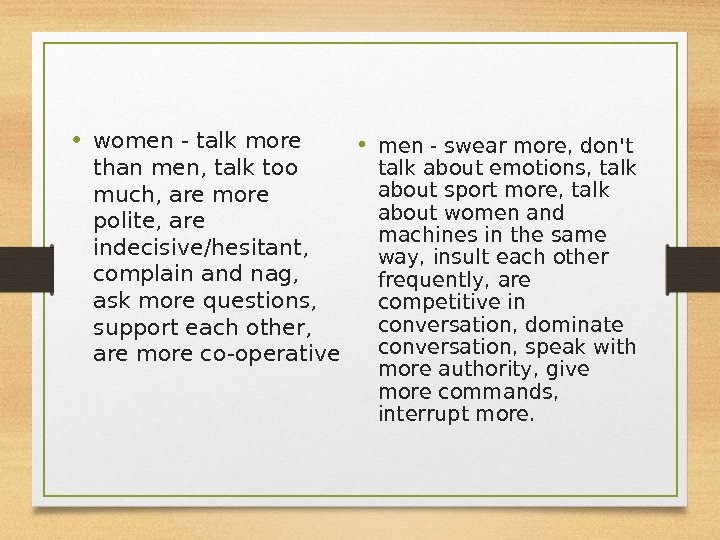 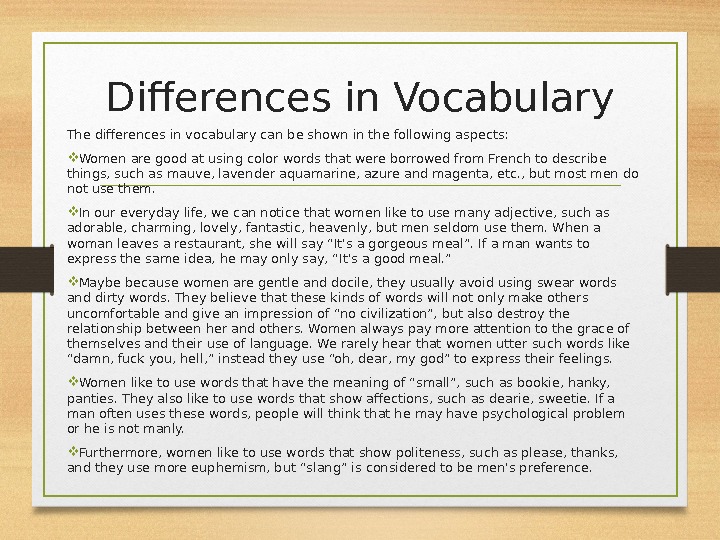 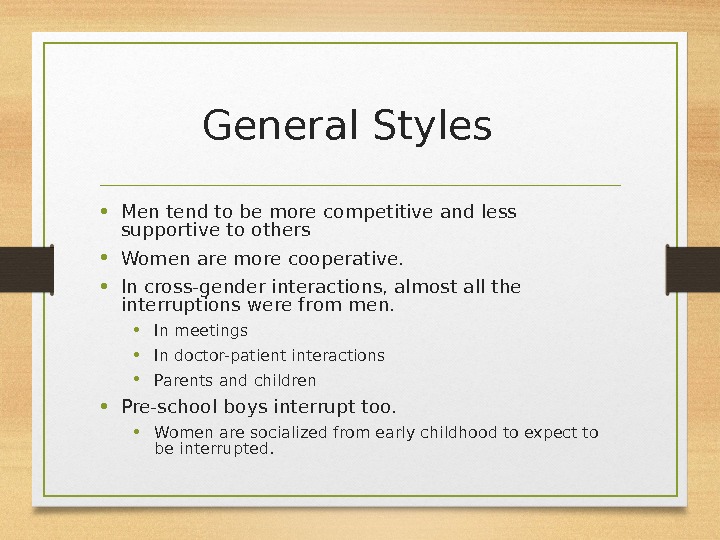 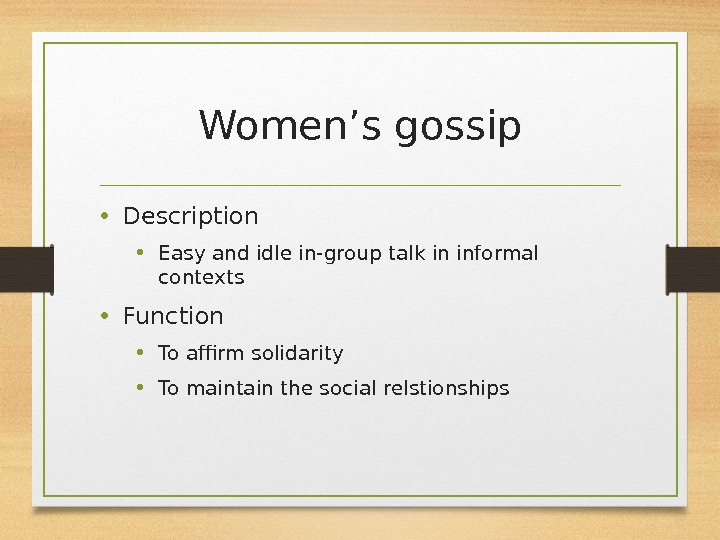 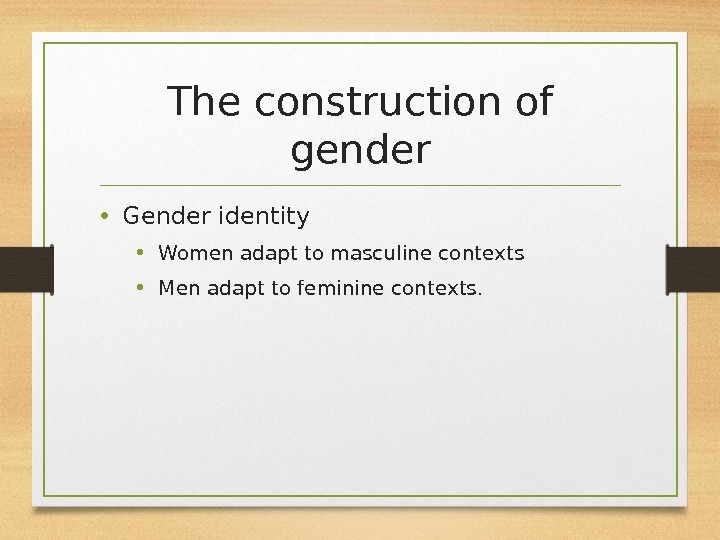 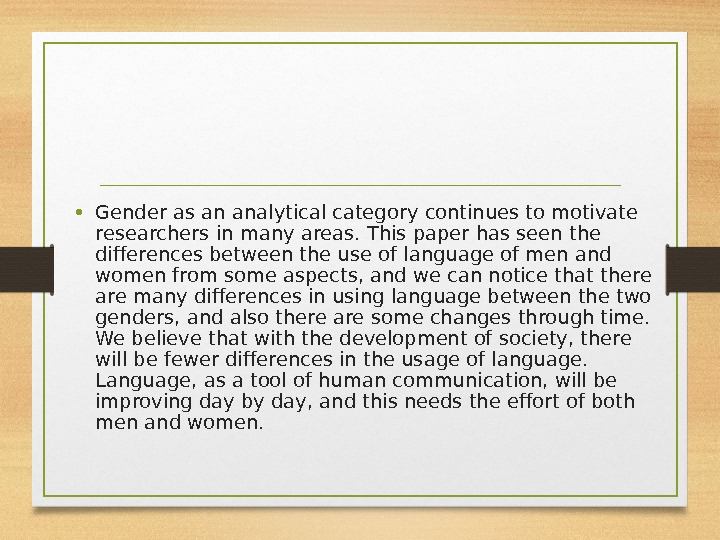 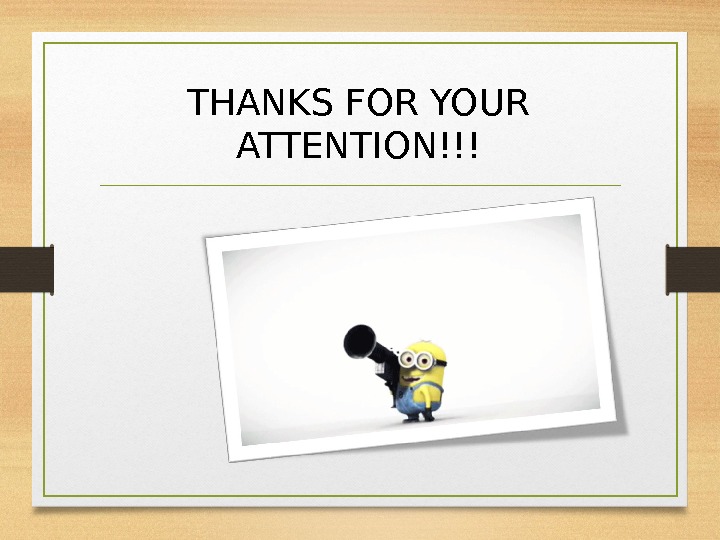 Differences in Pronunciation • Phonological differences between the speech of men and women have been noted in a variety of languages. Usually women’s pronunciation is better than men’s, such as the pronunciation of “-ing”. Shuy (1969) made a study in this field, and he found that 62. 2% of men pronounced “-ing” in a wrong way, but only 28. 9% of women didn’t pronounce right. • This can also be shown in the learning of the second language. Usually female students have better pronunciation than male students, and that can explain the reason why more girls choose to learn language as their major than boys. • Generally speaking, girls exhibit a better ability in language.

• women — talk more than men, talk too much, are more polite, are indecisive/hesitant, complain and nag, ask more questions, support each other, are more co-operative • men — swear more, don’t talk about emotions, talk about sport more, talk about women and machines in the same way, insult each other frequently, are competitive in conversation, dominate conversation, speak with more authority, give more commands, interrupt more.

Differences in Vocabulary The differences in vocabulary can be shown in the following aspects: Women are good at using color words that were borrowed from French to describe things, such as mauve, lavender aquamarine, azure and magenta, etc. , but most men do not use them. In our everyday life, we can notice that women like to use many adjective, such as adorable, charming, lovely, fantastic, heavenly, but men seldom use them. When a woman leaves a restaurant, she will say “It’s a gorgeous meal”. If a man wants to express the same idea, he may only say, “It’s a good meal. ” Maybe because women are gentle and docile, they usually avoid using swear words and dirty words. They believe that these kinds of words will not only make others uncomfortable and give an impression of “no civilization”, but also destroy the relationship between her and others. Women always pay more attention to the grace of themselves and their use of language. We rarely hear that women utter such words like “damn, fuck you, hell, ” instead they use “oh, dear, my god” to express their feelings. Women like to use words that have the meaning of “small”, such as bookie, hanky, panties. They also like to use words that show affections, such as dearie, sweetie. If a man often uses these words, people will think that he may have psychological problem or he is not manly. Furthermore, women like to use words that show politeness, such as please, thanks, and they use more euphemism, but “slang” is considered to be men’s preference.

General Styles • Men tend to be more competitive and less supportive to others • Women are more cooperative. • In cross-gender interactions, almost all the interruptions were from men. • In meetings • In doctor-patient interactions • Parents and children • Pre-school boys interrupt too. • Women are socialized from early childhood to expect to be interrupted.

• Gender as an analytical category continues to motivate researchers in many areas. This paper has seen the differences between the use of language of men and women from some aspects, and we can notice that there are many differences in using language between the two genders, and also there are some changes through time. We believe that with the development of society, there will be fewer differences in the usage of language. Language, as a tool of human communication, will be improving day by day, and this needs the effort of both men and women.

THANKS FOR YOUR ATTENTION!!!