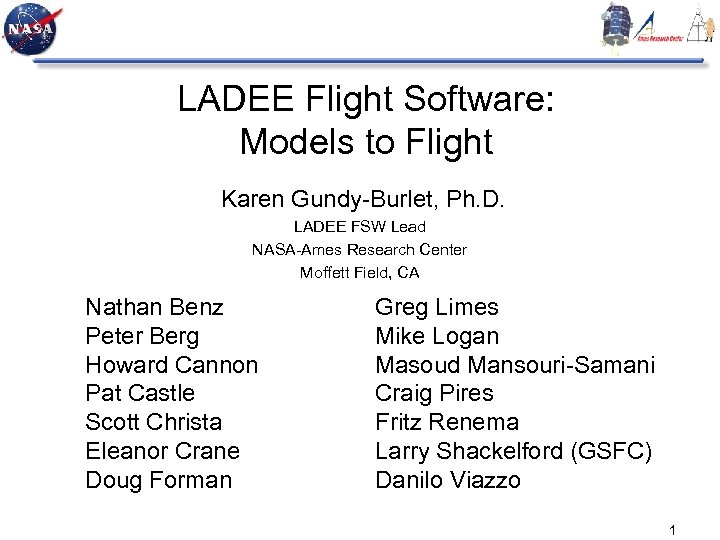 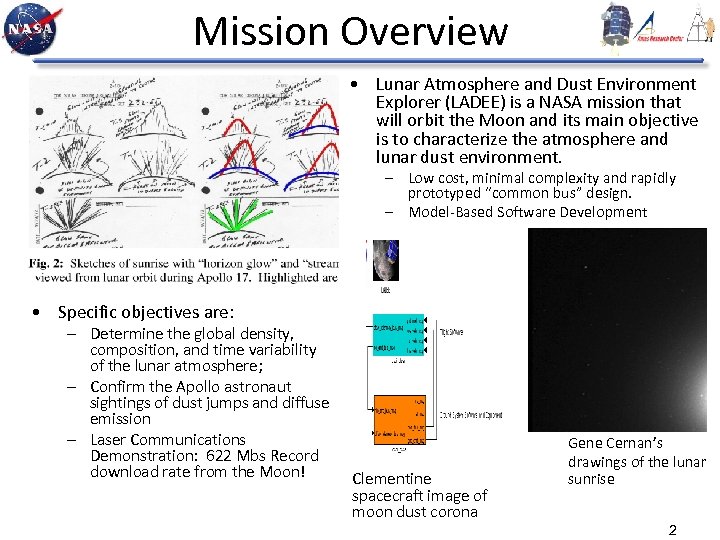 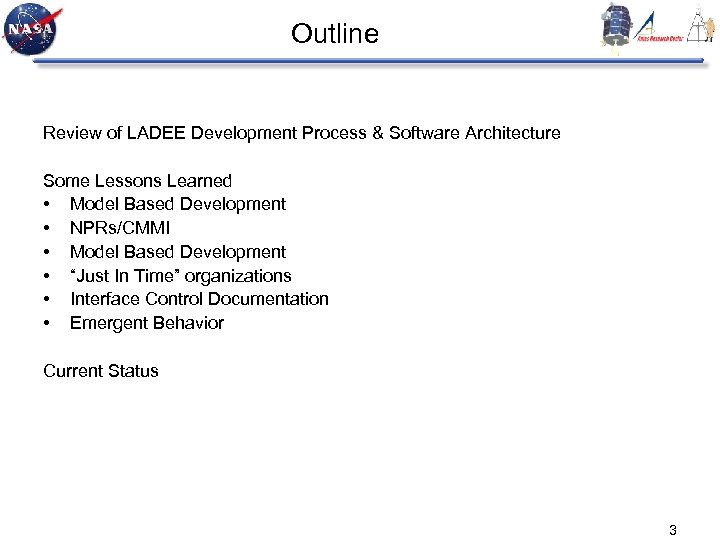 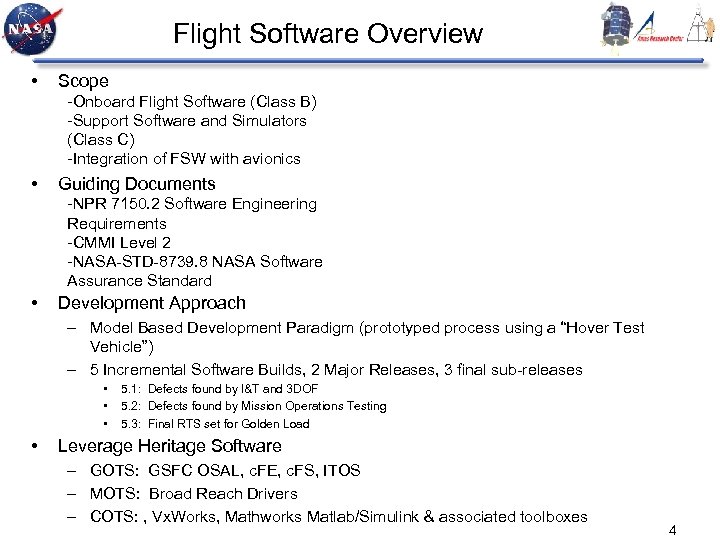 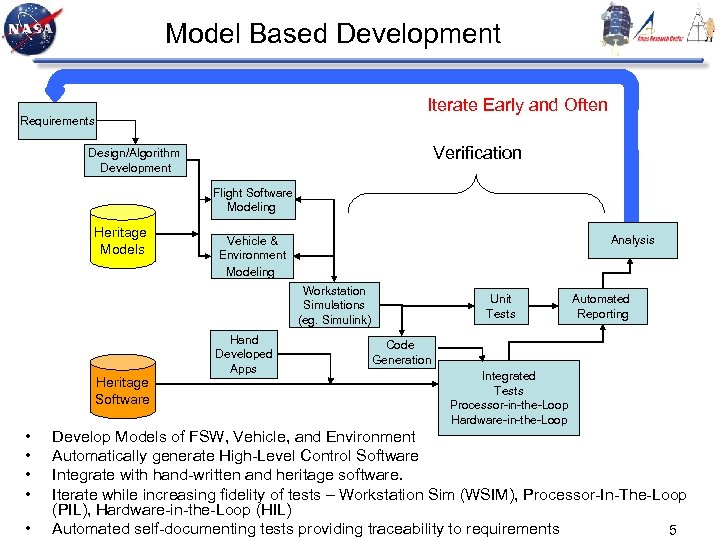 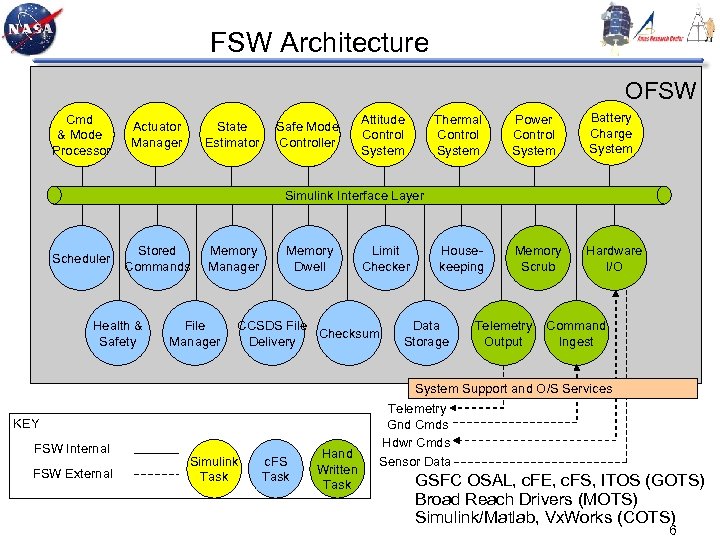 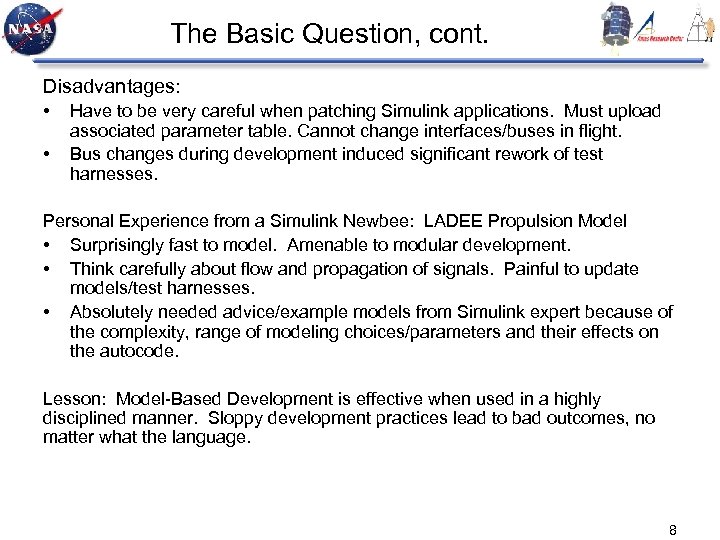 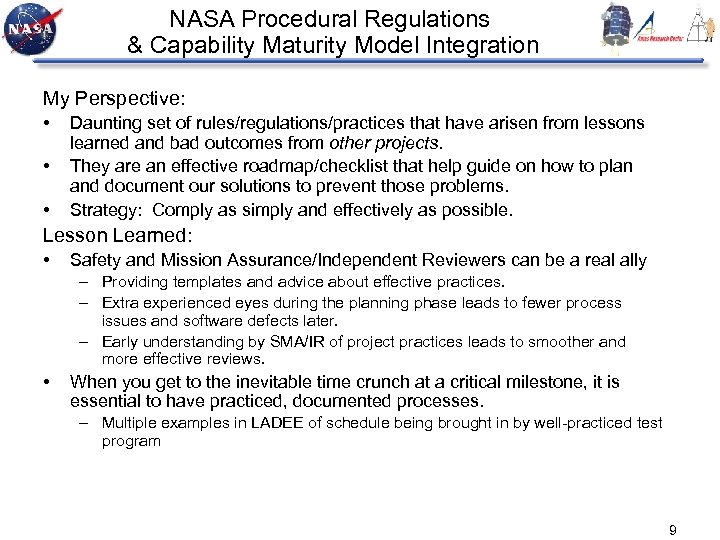 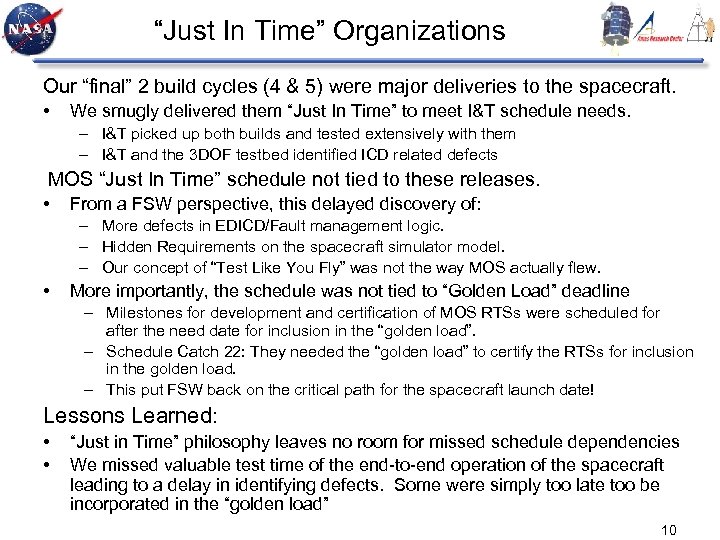 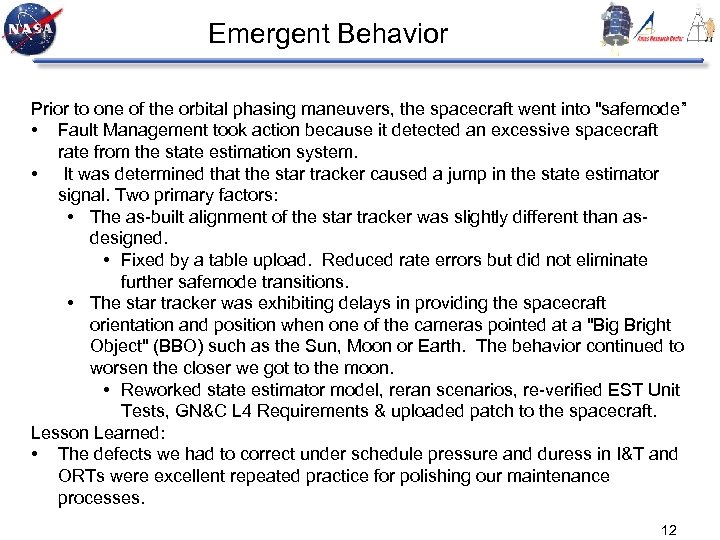 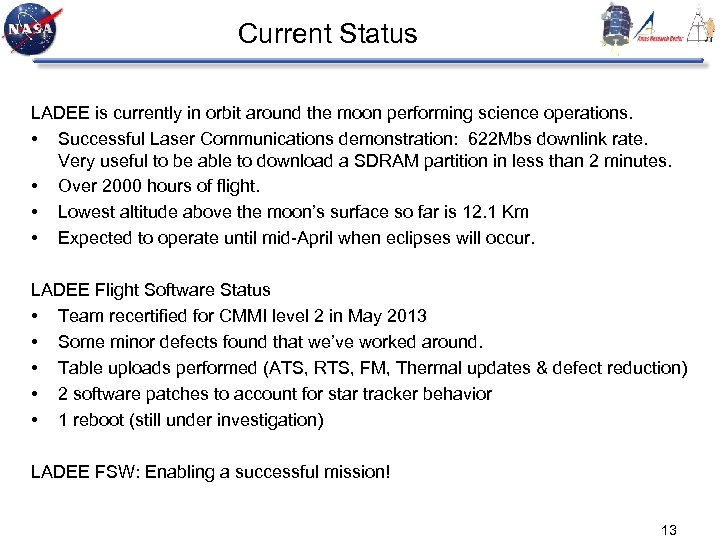 The Basic Question, cont. Disadvantages: • • Have to be very careful when patching Simulink applications. Must upload associated parameter table. Cannot change interfaces/buses in flight. Bus changes during development induced significant rework of test harnesses. Personal Experience from a Simulink Newbee: LADEE Propulsion Model • Surprisingly fast to model. Amenable to modular development. • Think carefully about flow and propagation of signals. Painful to update models/test harnesses. • Absolutely needed advice/example models from Simulink expert because of the complexity, range of modeling choices/parameters and their effects on the autocode. Lesson: Model-Based Development is effective when used in a highly disciplined manner. Sloppy development practices lead to bad outcomes, no matter what the language. 8

NASA Procedural Regulations & Capability Maturity Model Integration My Perspective: • • • Daunting set of rules/regulations/practices that have arisen from lessons learned and bad outcomes from other projects. They are an effective roadmap/checklist that help guide on how to plan and document our solutions to prevent those problems. Strategy: Comply as simply and effectively as possible. Lesson Learned: • Safety and Mission Assurance/Independent Reviewers can be a real ally – Providing templates and advice about effective practices. – Extra experienced eyes during the planning phase leads to fewer process issues and software defects later. – Early understanding by SMA/IR of project practices leads to smoother and more effective reviews. • When you get to the inevitable time crunch at a critical milestone, it is essential to have practiced, documented processes. – Multiple examples in LADEE of schedule being brought in by well-practiced test program 9

“Just In Time” Organizations Our “final” 2 build cycles (4 & 5) were major deliveries to the spacecraft. • We smugly delivered them “Just In Time” to meet I&T schedule needs. – I&T picked up both builds and tested extensively with them – I&T and the 3 DOF testbed identified ICD related defects MOS “Just In Time” schedule not tied to these releases. • From a FSW perspective, this delayed discovery of: – More defects in EDICD/Fault management logic. – Hidden Requirements on the spacecraft simulator model. – Our concept of “Test Like You Fly” was not the way MOS actually flew. • More importantly, the schedule was not tied to “Golden Load” deadline – Milestones for development and certification of MOS RTSs were scheduled for after the need date for inclusion in the “golden load”. – Schedule Catch 22: They needed the “golden load” to certify the RTSs for inclusion in the golden load. – This put FSW back on the critical path for the spacecraft launch date! Lessons Learned: • • “Just in Time” philosophy leaves no room for missed schedule dependencies We missed valuable test time of the end-to-end operation of the spacecraft leading to a delay in identifying defects. Some were simply too late too be incorporated in the “golden load” 10

Interface Control Documentation The primary cause of defect escape into Build 5. x was misunderstood or ambiguous ICDs. Examples: • • • Fuel Tanks (A, B) = FSW (1, 2), Ox Tanks (A, B) = FSW (2, 1) Star tracker: Interpreted 8 Hz operation to mean heads alternately operating at 4 Hz. Instead, they operated synchronously. Reaction Wheels: “Current Limit Flag” was a warning flag, not an error flag. Mitigation: • • EDICD in computer readable format and read into database, so could quickly reconfigure Ability to upload parameter tables & software patches Best prevention for ICD problems was our “Travelling Roadshow” • • EDU in a mobile chassis loaded with the FSW Flown to payload sites and integrated with instruments. Lessons Learned: • Early integration with payloads/instruments essential to clarifying ICDs. • Significant rework possible when one “saves money” by not purchasing instrument engineering development units 11

Emergent Behavior Prior to one of the orbital phasing maneuvers, the spacecraft went into "safemode” • Fault Management took action because it detected an excessive spacecraft rate from the state estimation system. • It was determined that the star tracker caused a jump in the state estimator signal. Two primary factors: • The as-built alignment of the star tracker was slightly different than asdesigned. • Fixed by a table upload. Reduced rate errors but did not eliminate further safemode transitions. • The star tracker was exhibiting delays in providing the spacecraft orientation and position when one of the cameras pointed at a "Big Bright Object" (BBO) such as the Sun, Moon or Earth. The behavior continued to worsen the closer we got to the moon. • Reworked state estimator model, reran scenarios, re-verified EST Unit Tests, GN&C L 4 Requirements & uploaded patch to the spacecraft. Lesson Learned: • The defects we had to correct under schedule pressure and duress in I&T and ORTs were excellent repeated practice for polishing our maintenance processes. 12