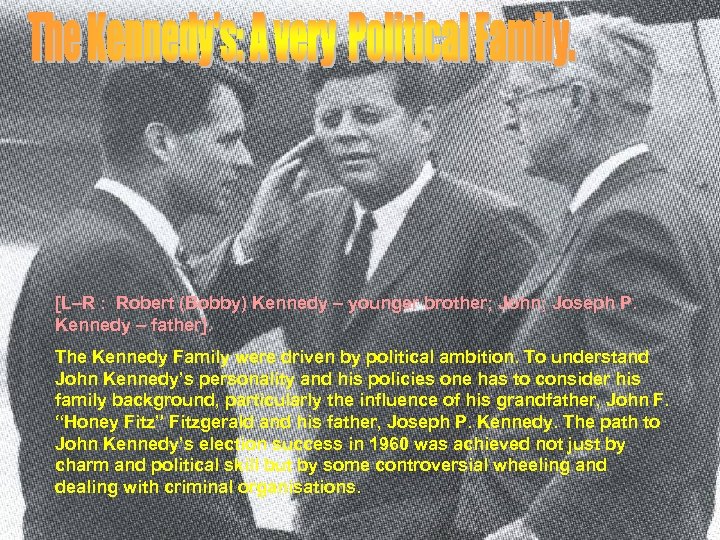 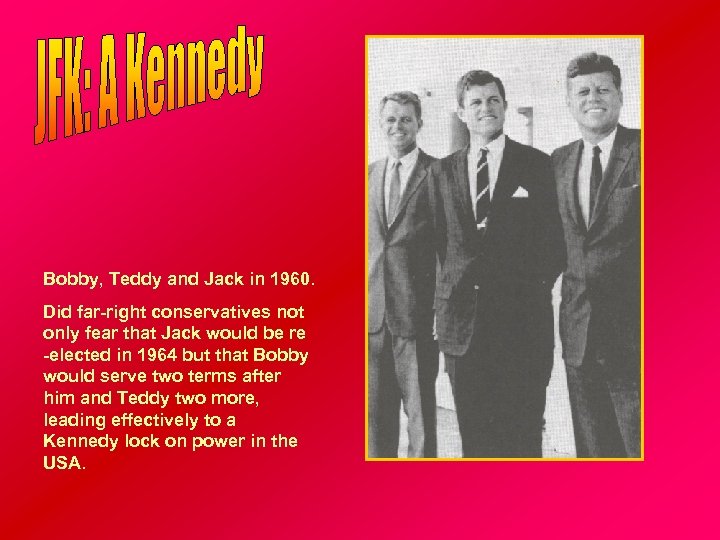 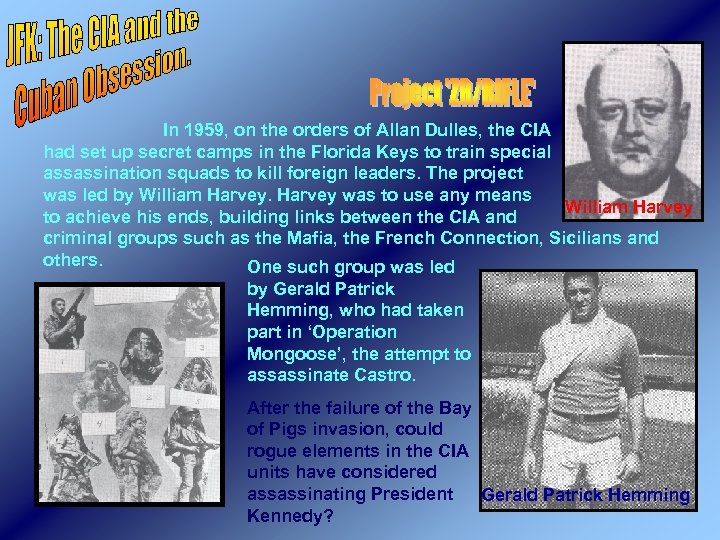 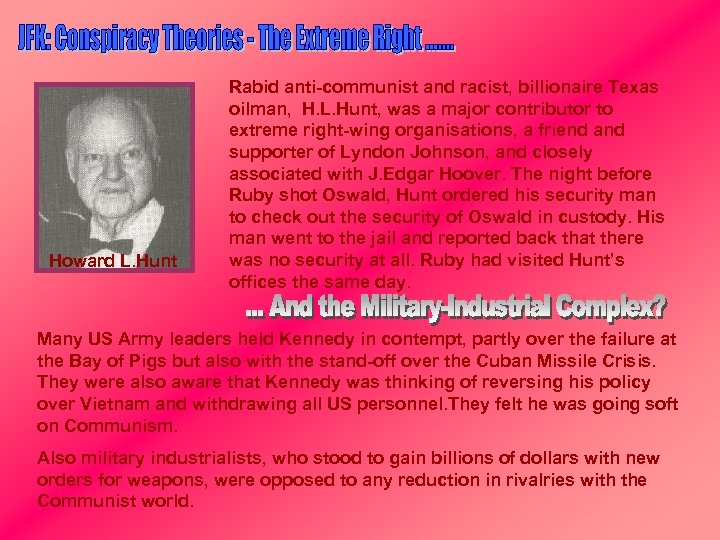 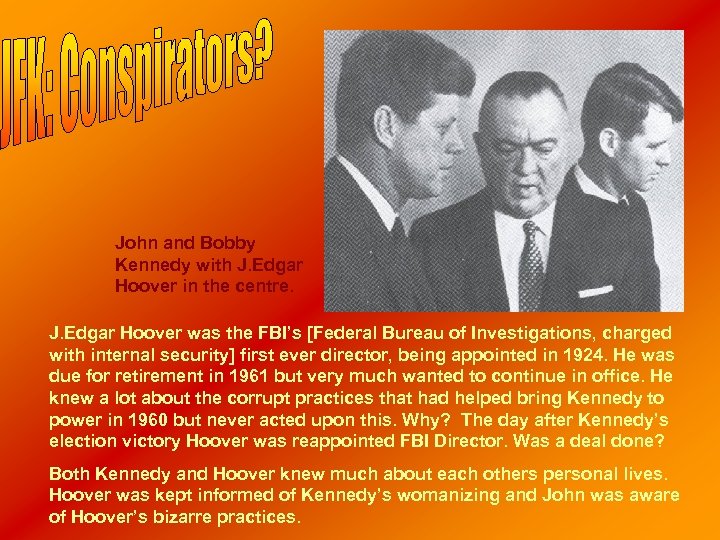 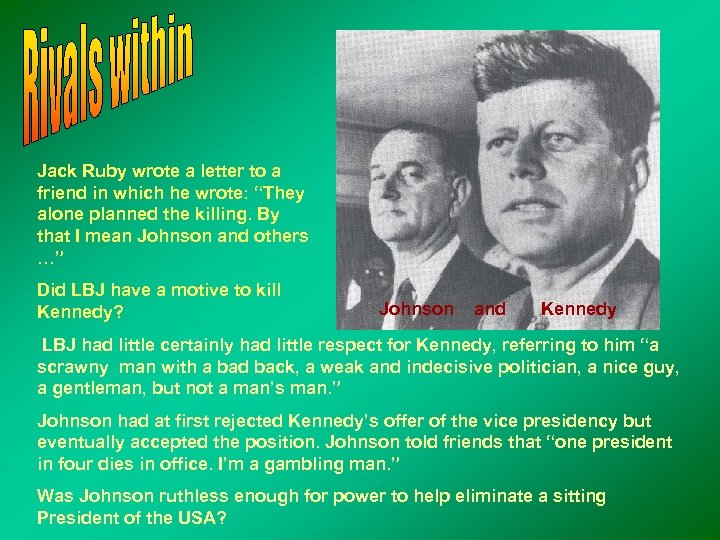 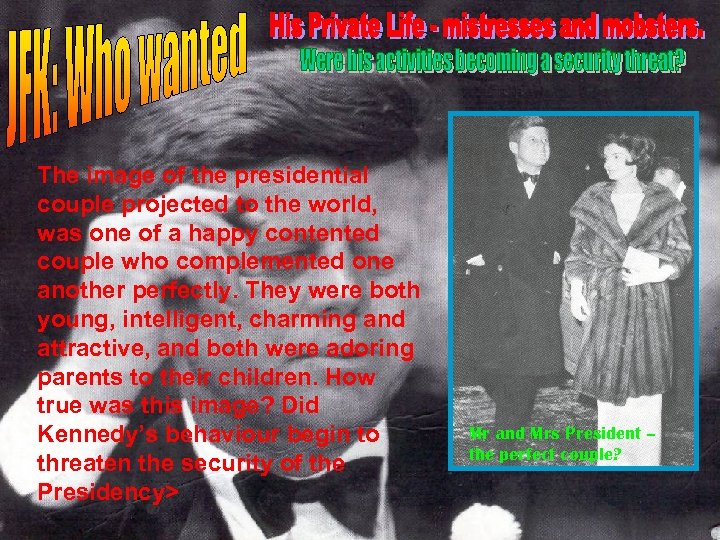 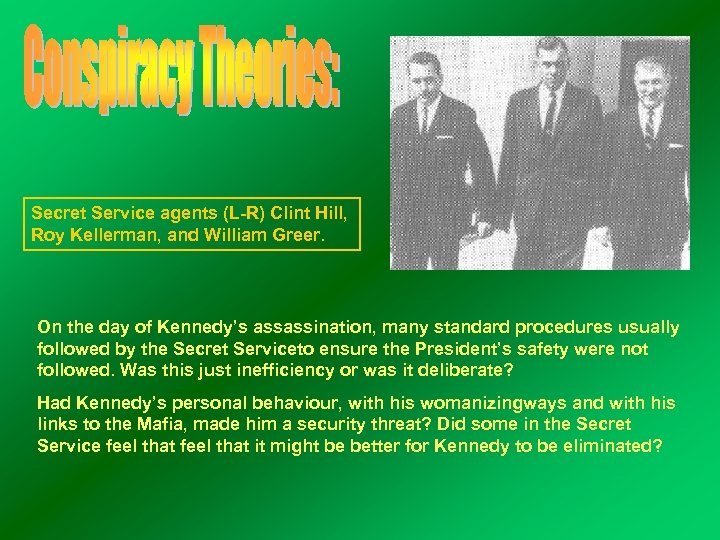 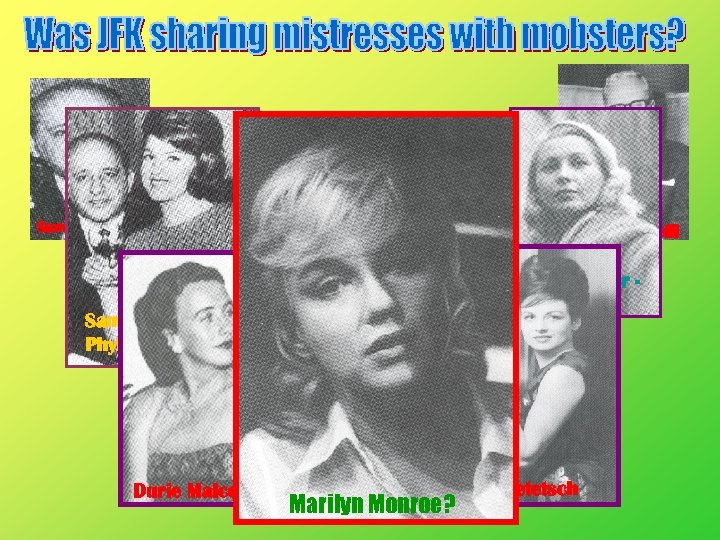 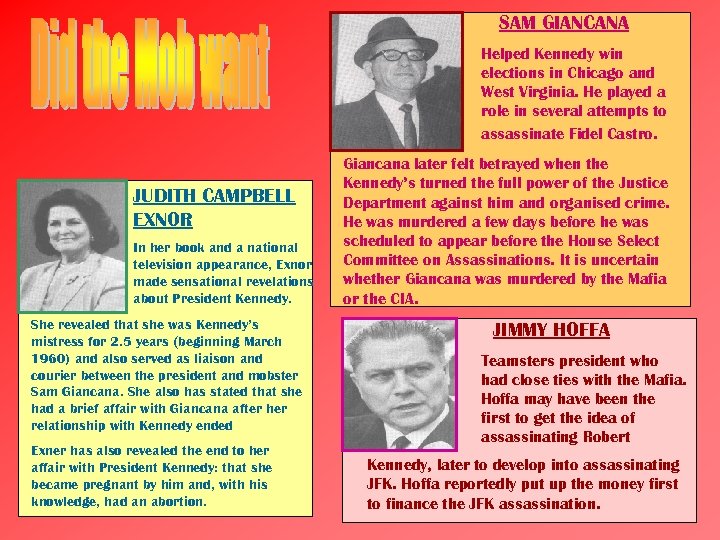 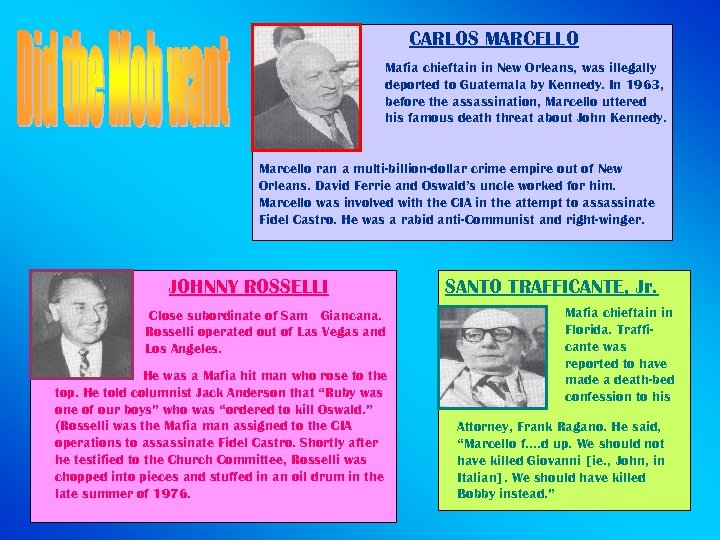 [L–R : Robert (Bobby) Kennedy – younger brother; John; Joseph P. Kennedy – father]. The Kennedy Family were driven by political ambition. To understand John Kennedy’s personality and his policies one has to consider his family background, particularly the influence of his grandfather, John F. “Honey Fitz” Fitzgerald and his father, Joseph P. Kennedy. The path to John Kennedy’s election success in 1960 was achieved not just by charm and political skill but by some controversial wheeling and dealing with criminal organisations.

Bobby, Teddy and Jack in 1960. Did far-right conservatives not only fear that Jack would be re -elected in 1964 but that Bobby would serve two terms after him and Teddy two more, leading effectively to a Kennedy lock on power in the USA.

The Cuban Missile Crisis of 1962, had brought the world to the edge of nuclear annihilation. Many on the Far-right felt that Kennedy was not doing enough to eliminate threat posed by Cuba. Fidel Castro They held Kennedy responsible for the failure of the Bay of Pigs invasion of Cuba in 1961. The US had helped exiled-Cubans, based in Florida, launch this coup against Castro, the Communist Cuban leader. It turned into a disaster as the invaders never got off the beaches. Many exiled Cubans and American extreme rightwingers never forgave Kennedy for withdrawing US air support, part of the original plan. They looked on Kennedy as being soft on Communism. The CIA had been responsible for planning the invasion. As a result the head of the CIA, Allen V. Dulles, was forced to humiliatingly step down. Had Kennedy created a powerful enemy in Dulles? Allan V. Dulles

In 1959, on the orders of Allan Dulles, the CIA had set up secret camps in the Florida Keys to train special assassination squads to kill foreign leaders. The project was led by William Harvey was to use any means William Harvey to achieve his ends, building links between the CIA and criminal groups such as the Mafia, the French Connection, Sicilians and others. One such group was led by Gerald Patrick Hemming, who had taken part in ‘Operation Mongoose’, the attempt to assassinate Castro. After the failure of the Bay of Pigs invasion, could rogue elements in the CIA units have considered assassinating President Gerald Patrick Hemming Kennedy?

Howard L. Hunt Rabid anti-communist and racist, billionaire Texas oilman, H. L. Hunt, was a major contributor to extreme right-wing organisations, a friend and supporter of Lyndon Johnson, and closely associated with J. Edgar Hoover. The night before Ruby shot Oswald, Hunt ordered his security man to check out the security of Oswald in custody. His man went to the jail and reported back that there was no security at all. Ruby had visited Hunt’s offices the same day. Many US Army leaders held Kennedy in contempt, partly over the failure at the Bay of Pigs but also with the stand-off over the Cuban Missile Crisis. They were also aware that Kennedy was thinking of reversing his policy over Vietnam and withdrawing all US personnel. They felt he was going soft on Communism. Also military industrialists, who stood to gain billions of dollars with new orders for weapons, were opposed to any reduction in rivalries with the Communist world.

John and Bobby Kennedy with J. Edgar Hoover in the centre. J. Edgar Hoover was the FBI’s [Federal Bureau of Investigations, charged with internal security] first ever director, being appointed in 1924. He was due for retirement in 1961 but very much wanted to continue in office. He knew a lot about the corrupt practices that had helped bring Kennedy to power in 1960 but never acted upon this. Why? The day after Kennedy’s election victory Hoover was reappointed FBI Director. Was a deal done? Both Kennedy and Hoover knew much about each others personal lives. Hoover was kept informed of Kennedy’s womanizing and John was aware of Hoover’s bizarre practices.

Jack Ruby wrote a letter to a friend in which he wrote: “They alone planned the killing. By that I mean Johnson and others …” Did LBJ have a motive to kill Kennedy? Johnson and Kennedy LBJ had little certainly had little respect for Kennedy, referring to him “a scrawny man with a bad back, a weak and indecisive politician, a nice guy, a gentleman, but not a man’s man. ” Johnson had at first rejected Kennedy’s offer of the vice presidency but eventually accepted the position. Johnson told friends that “one president in four dies in office. I’m a gambling man. ” Was Johnson ruthless enough for power to help eliminate a sitting President of the USA?

The image of the presidential couple projected to the world, was one of a happy contented couple who complemented one another perfectly. They were both young, intelligent, charming and attractive, and both were adoring parents to their children. How true was this image? Did Kennedy’s behaviour begin to threaten the security of the Presidency> Mr and Mrs President – the perfect couple?

Secret Service agents (L-R) Clint Hill, Roy Kellerman, and William Greer. On the day of Kennedy’s assassination, many standard procedures usually followed by the Secret Serviceto ensure the President’s safety were not followed. Was this just inefficiency or was it deliberate? Had Kennedy’s personal behaviour, with his womanizingways and with his links to the Mafia, made him a security threat? Did some in the Secret Service feel that it might be better for Kennedy to be eliminated?

SAM GIANCANA Helped Kennedy win elections in Chicago and West Virginia. He played a role in several attempts to assassinate Fidel Castro. JUDITH CAMPBELL EXNOR In her book and a national television appearance, Exnor made sensational revelations about President Kennedy. She revealed that she was Kennedy’s mistress for 2. 5 years (beginning March 1960) and also served as liaison and courier between the president and mobster Sam Giancana. She also has stated that she had a brief affair with Giancana after her relationship with Kennedy ended Exner has also revealed the end to her affair with President Kennedy: that she became pregnant by him and, with his knowledge, had an abortion. Giancana later felt betrayed when the Kennedy’s turned the full power of the Justice Department against him and organised crime. He was murdered a few days before he was scheduled to appear before the House Select Committee on Assassinations. It is uncertain whether Giancana was murdered by the Mafia or the CIA. JIMMY HOFFA Teamsters president who had close ties with the Mafia. Hoffa may have been the first to get the idea of assassinating Robert Kennedy, later to develop into assassinating JFK. Hoffa reportedly put up the money first to finance the JFK assassination.

CARLOS MARCELLO Mafia chieftain in New Orleans, was illegally deported to Guatemala by Kennedy. In 1963, before the assassination, Marcello uttered his famous death threat about John Kennedy. Marcello ran a multi-billion-dollar crime empire out of New Orleans. David Ferrie and Oswald’s uncle worked for him. Marcello was involved with the CIA in the attempt to assassinate Fidel Castro. He was a rabid anti-Communist and right-winger. JOHNNY ROSSELLI Close subordinate of Sam Giancana. Rosselli operated out of Las Vegas and Los Angeles. He was a Mafia hit man who rose to the top. He told columnist Jack Anderson that “Ruby was one of our boys” who was “ordered to kill Oswald. ” (Rosselli was the Mafia man assigned to the CIA operations to assassinate Fidel Castro. Shortly after he testified to the Church Committee, Rosselli was chopped into pieces and stuffed in an oil drum in the late summer of 1976. SANTO TRAFFICANTE, Jr. Mafia chieftain in Florida. Trafficante was reported to have made a death-bed confession to his Attorney, Frank Ragano. He said, “Marcello f…. d up. We should not have killed Giovanni [ie. , John, in Italian]. We should have killed Bobby instead. ”