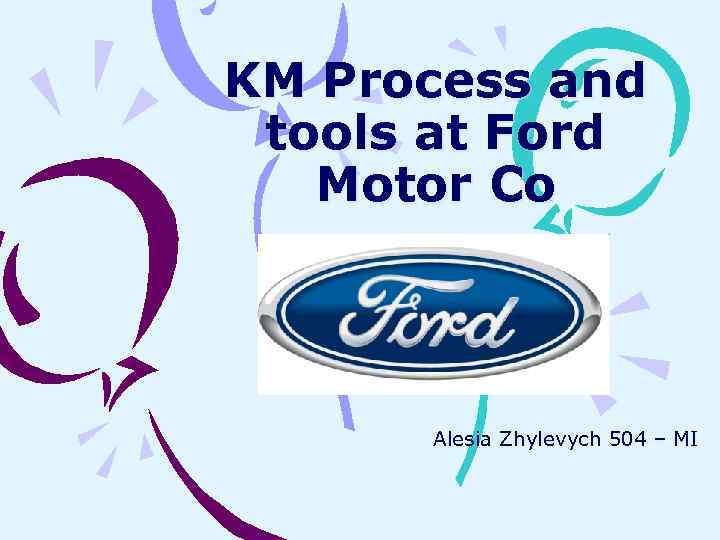 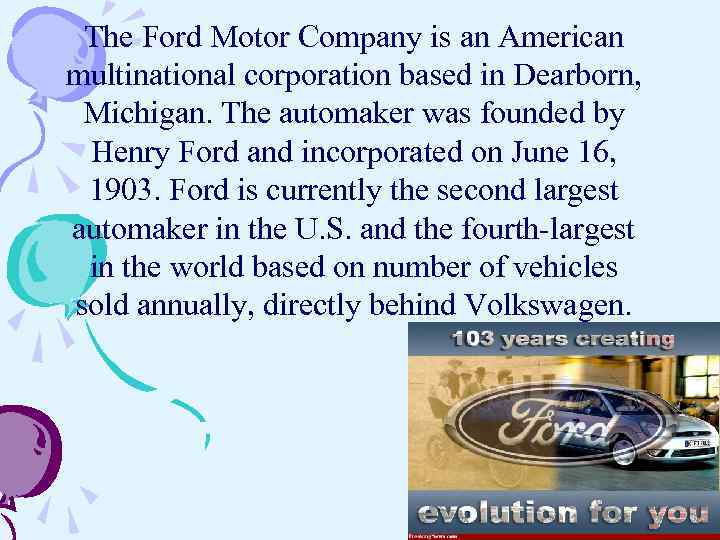 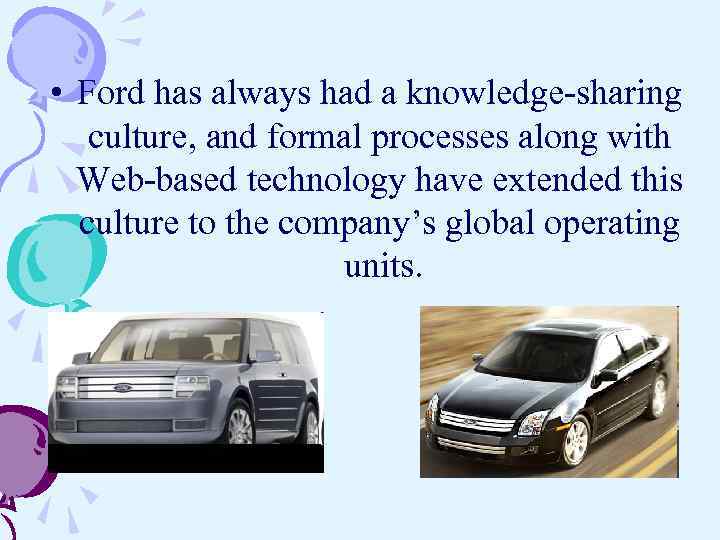 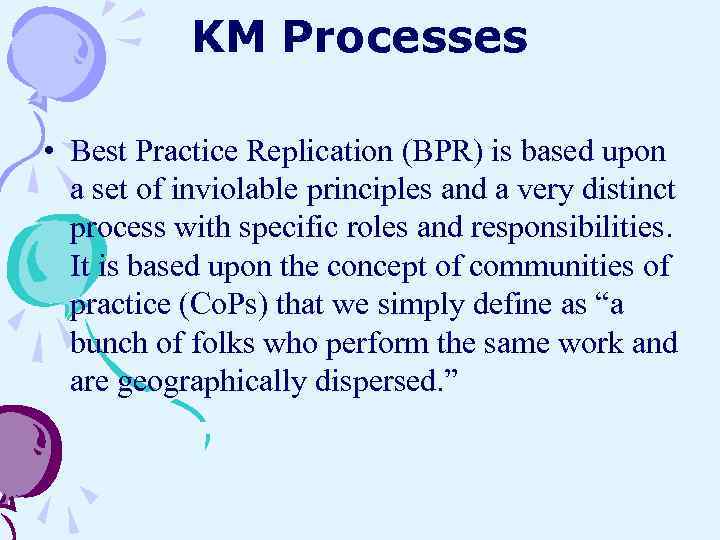 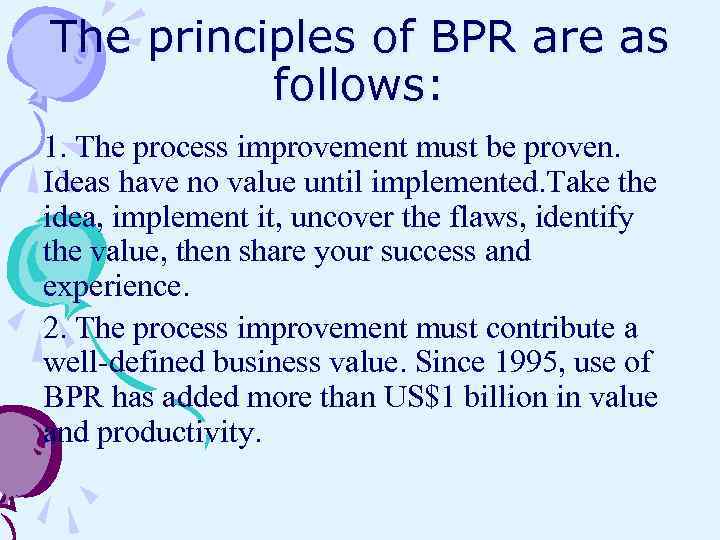 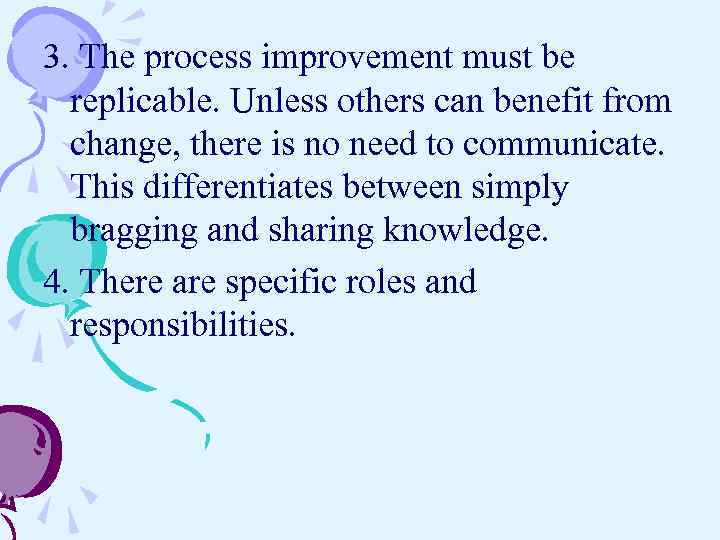 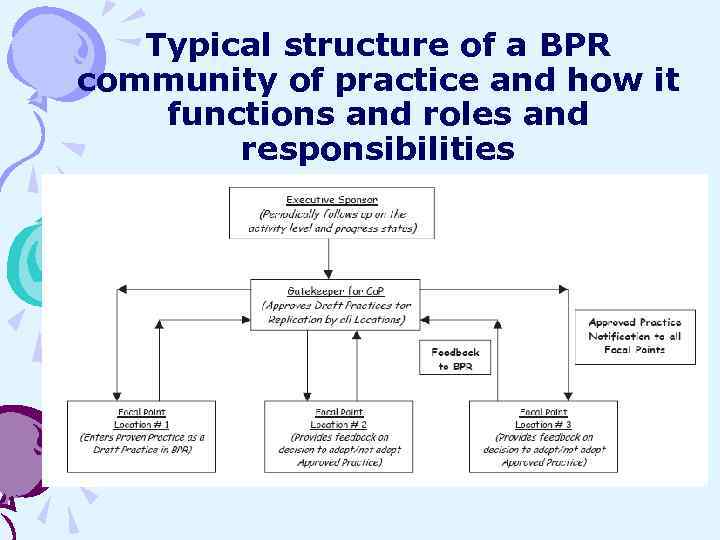 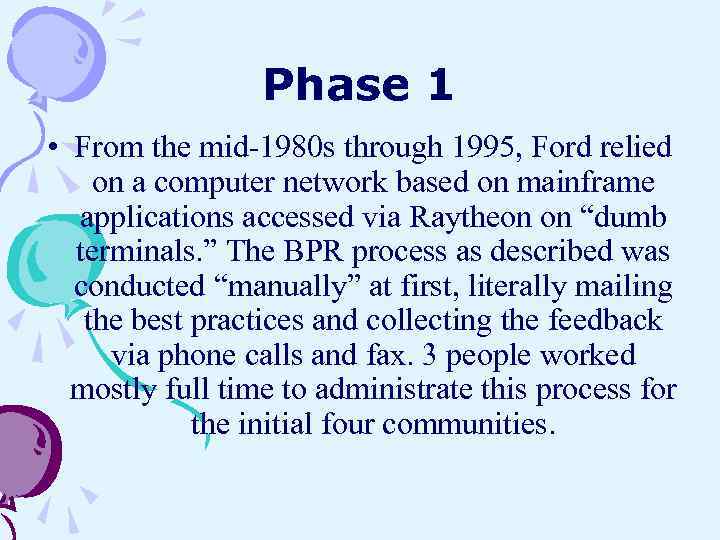 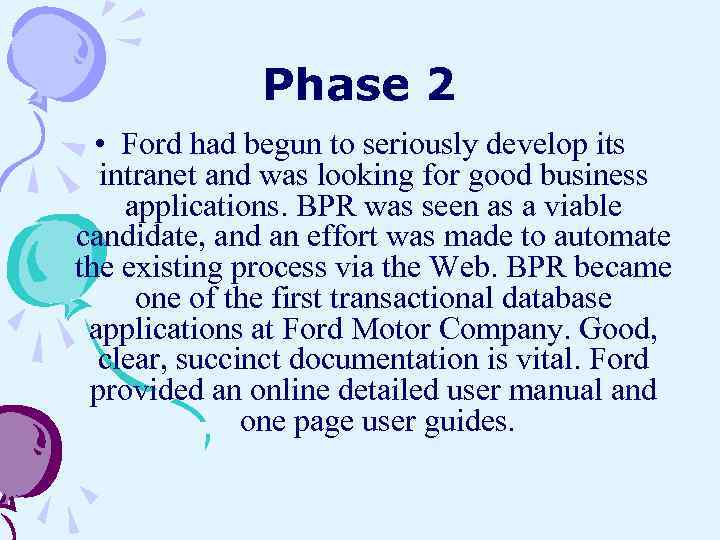 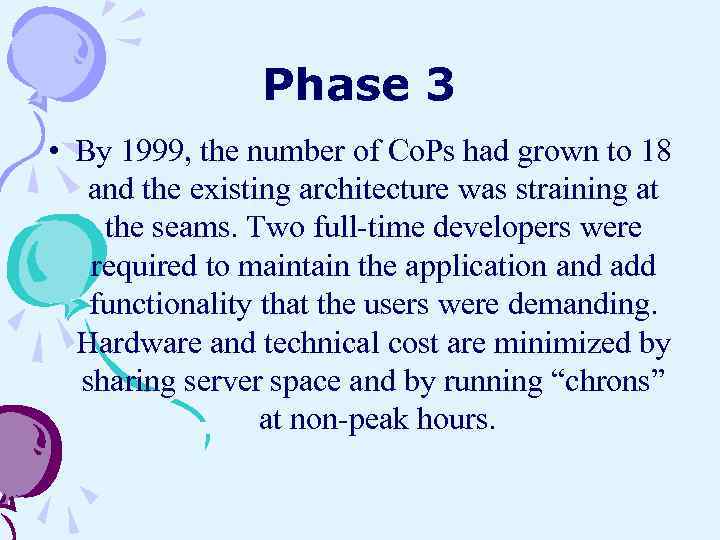 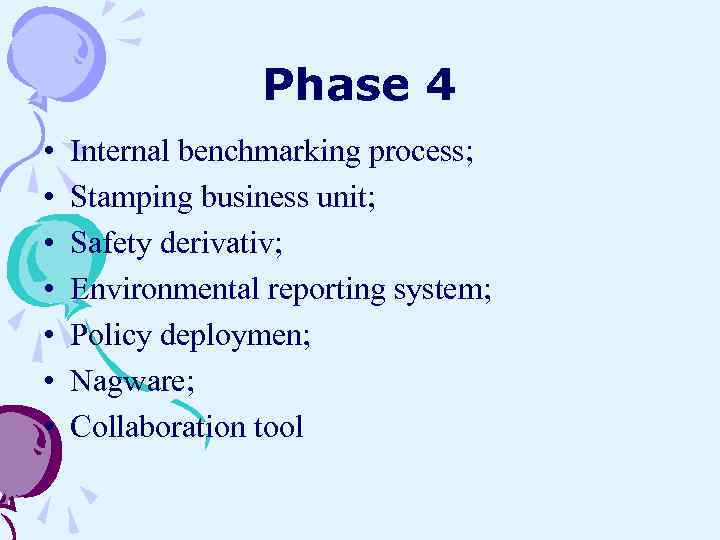 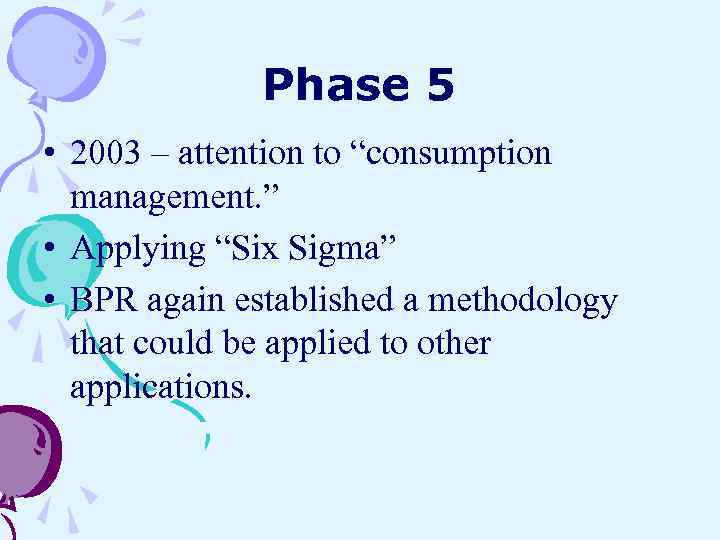 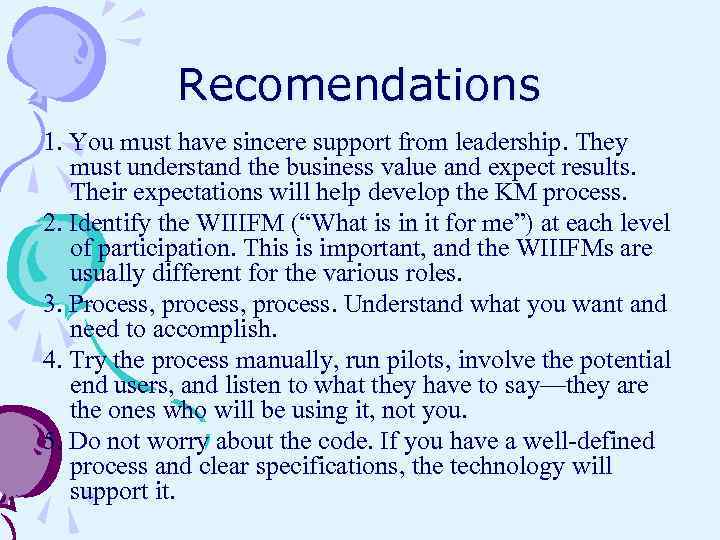 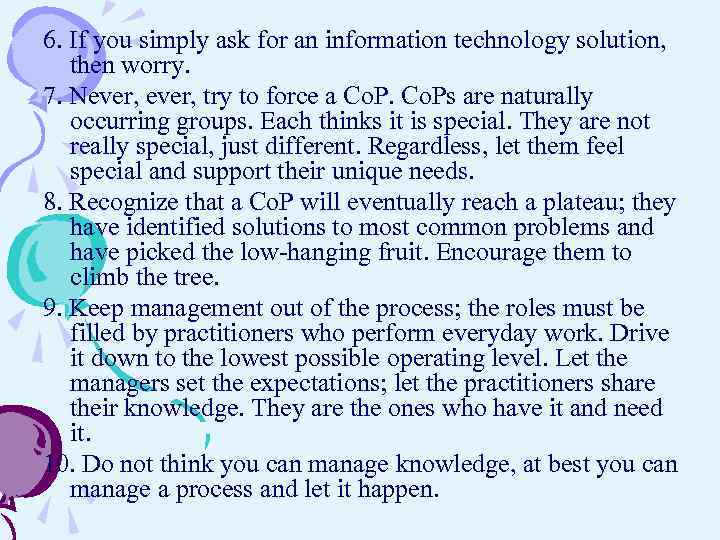 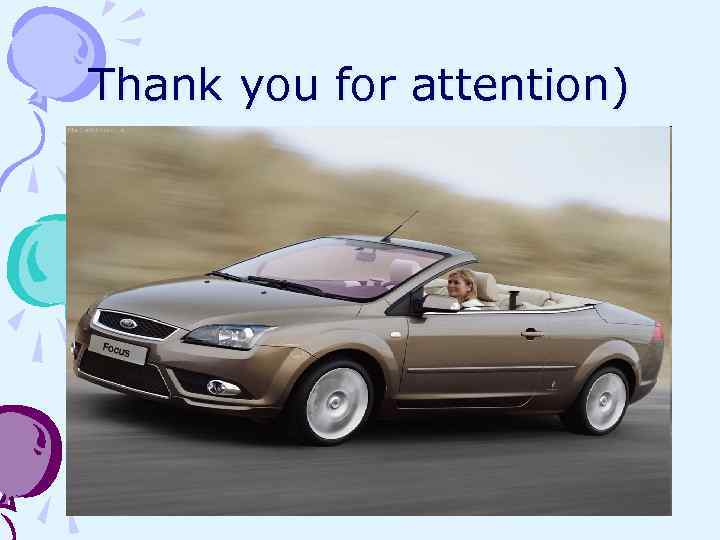 The Ford Motor Company is an American multinational corporation based in Dearborn, Michigan. The automaker was founded by Henry Ford and incorporated on June 16, 1903. Ford is currently the second largest automaker in the U. S. and the fourth-largest in the world based on number of vehicles sold annually, directly behind Volkswagen.

• Ford has always had a knowledge-sharing culture, and formal processes along with Web-based technology have extended this culture to the company’s global operating units.

KM Processes • Best Practice Replication (BPR) is based upon a set of inviolable principles and a very distinct process with specific roles and responsibilities. It is based upon the concept of communities of practice (Co. Ps) that we simply define as “a bunch of folks who perform the same work and are geographically dispersed. ”

The principles of BPR are as follows: 1. The process improvement must be proven. Ideas have no value until implemented. Take the idea, implement it, uncover the flaws, identify the value, then share your success and experience. 2. The process improvement must contribute a well-defined business value. Since 1995, use of BPR has added more than US$1 billion in value and productivity.

3. The process improvement must be replicable. Unless others can benefit from change, there is no need to communicate. This differentiates between simply bragging and sharing knowledge. 4. There are specific roles and responsibilities.

Phase 1 • From the mid-1980 s through 1995, Ford relied on a computer network based on mainframe applications accessed via Raytheon on “dumb terminals. ” The BPR process as described was conducted “manually” at first, literally mailing the best practices and collecting the feedback via phone calls and fax. 3 people worked mostly full time to administrate this process for the initial four communities.

Phase 2 • Ford had begun to seriously develop its intranet and was looking for good business applications. BPR was seen as a viable candidate, and an effort was made to automate the existing process via the Web. BPR became one of the first transactional database applications at Ford Motor Company. Good, clear, succinct documentation is vital. Ford provided an online detailed user manual and one page user guides.

Phase 3 • By 1999, the number of Co. Ps had grown to 18 and the existing architecture was straining at the seams. Two full-time developers were required to maintain the application and add functionality that the users were demanding. Hardware and technical cost are minimized by sharing server space and by running “chrons” at non-peak hours.

Phase 5 • 2003 – attention to “consumption management. ” • Applying “Six Sigma” • BPR again established a methodology that could be applied to other applications.

Recomendations 1. You must have sincere support from leadership. They must understand the business value and expect results. Their expectations will help develop the KM process. 2. Identify the WIIIFM (“What is in it for me”) at each level of participation. This is important, and the WIIIFMs are usually different for the various roles. 3. Process, process. Understand what you want and need to accomplish. 4. Try the process manually, run pilots, involve the potential end users, and listen to what they have to say—they are the ones who will be using it, not you. 5. Do not worry about the code. If you have a well-defined process and clear specifications, the technology will support it.

6. If you simply ask for an information technology solution, then worry. 7. Never, try to force a Co. Ps are naturally occurring groups. Each thinks it is special. They are not really special, just different. Regardless, let them feel special and support their unique needs. 8. Recognize that a Co. P will eventually reach a plateau; they have identified solutions to most common problems and have picked the low-hanging fruit. Encourage them to climb the tree. 9. Keep management out of the process; the roles must be filled by practitioners who perform everyday work. Drive it down to the lowest possible operating level. Let the managers set the expectations; let the practitioners share their knowledge. They are the ones who have it and need it. 10. Do not think you can manage knowledge, at best you can manage a process and let it happen.

Thank you for attention)