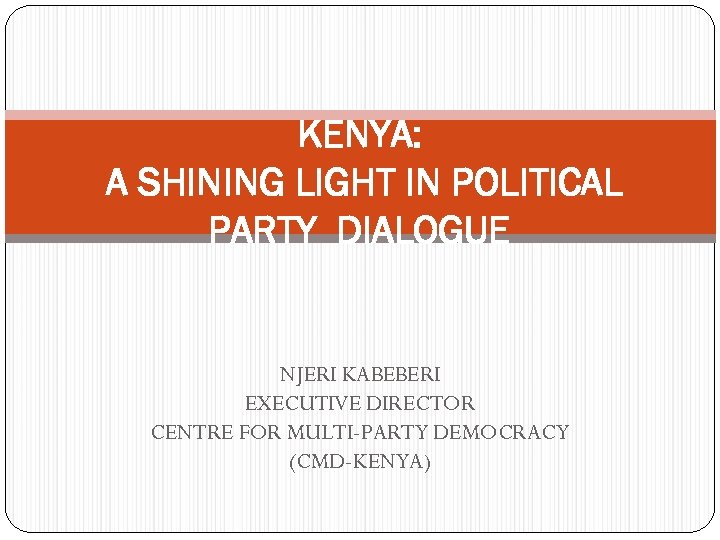 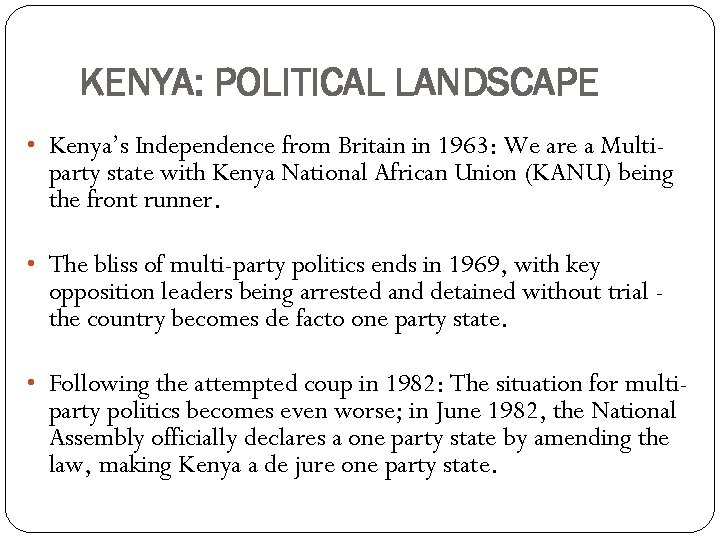 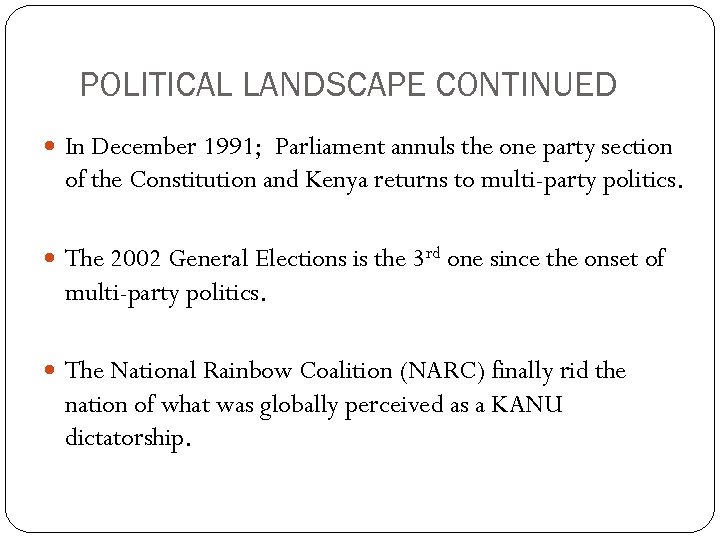 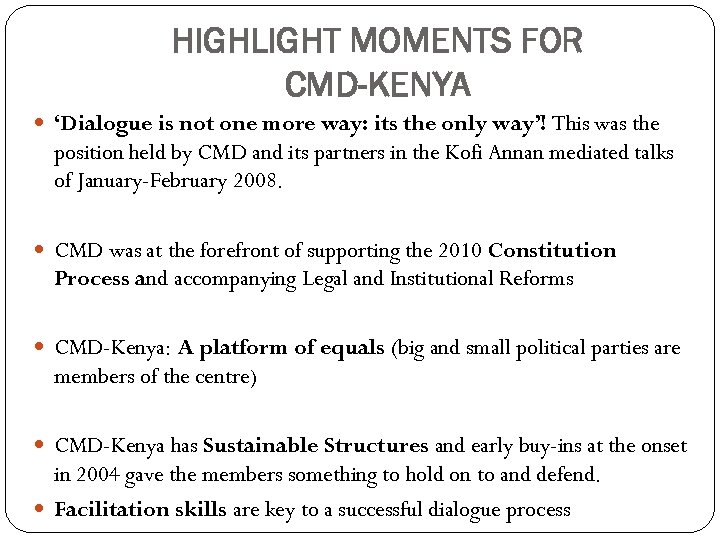 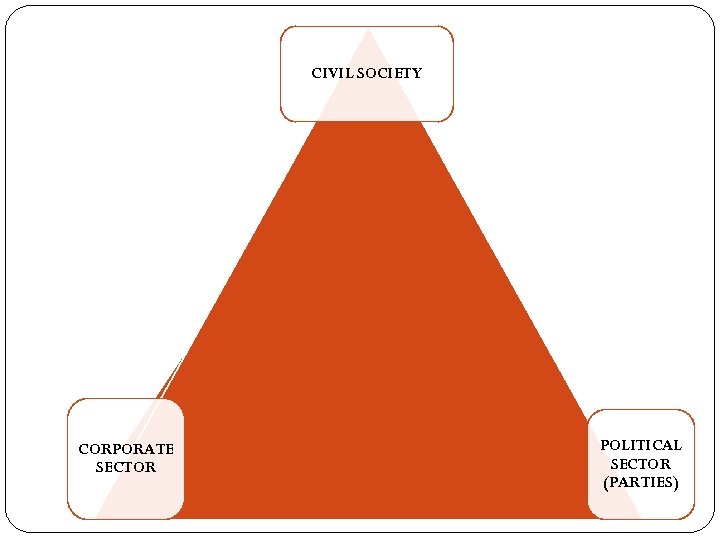 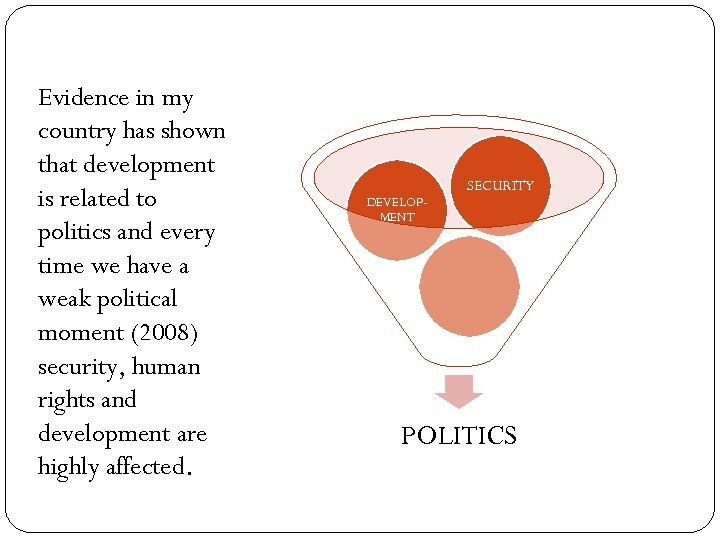 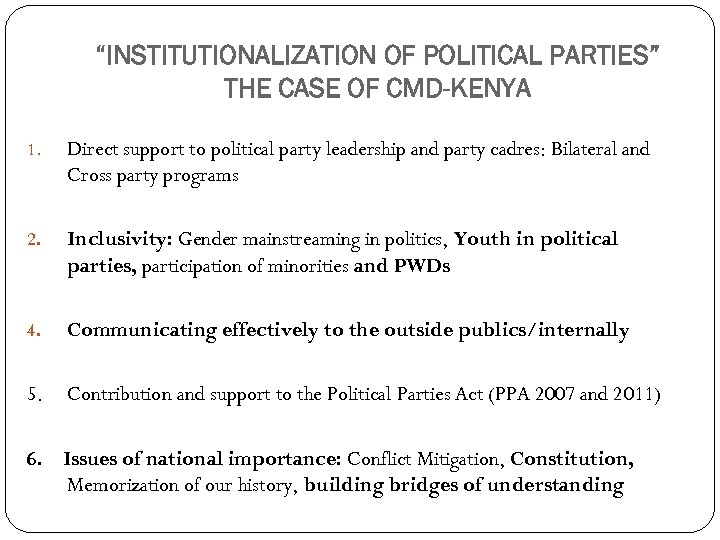 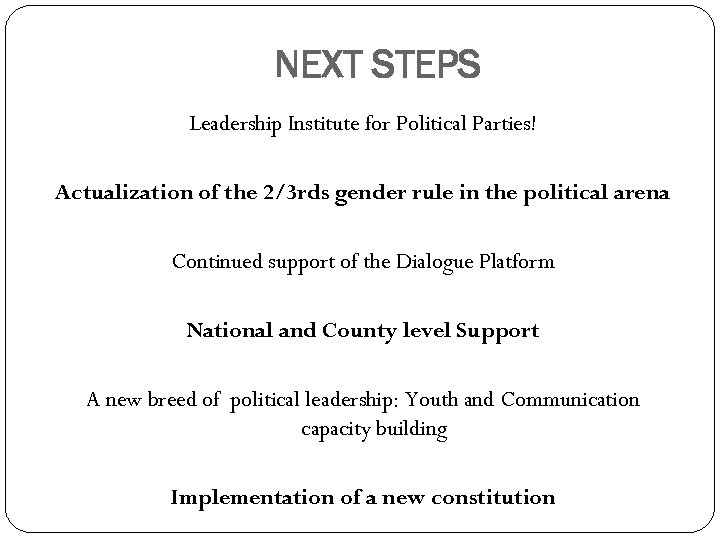 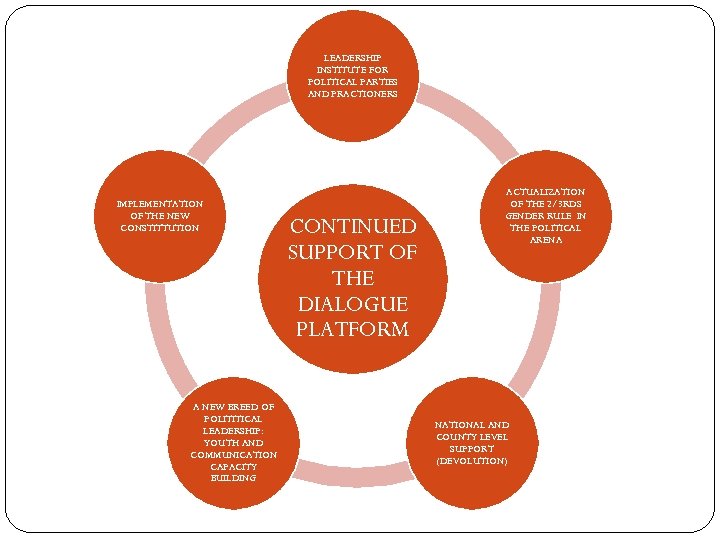 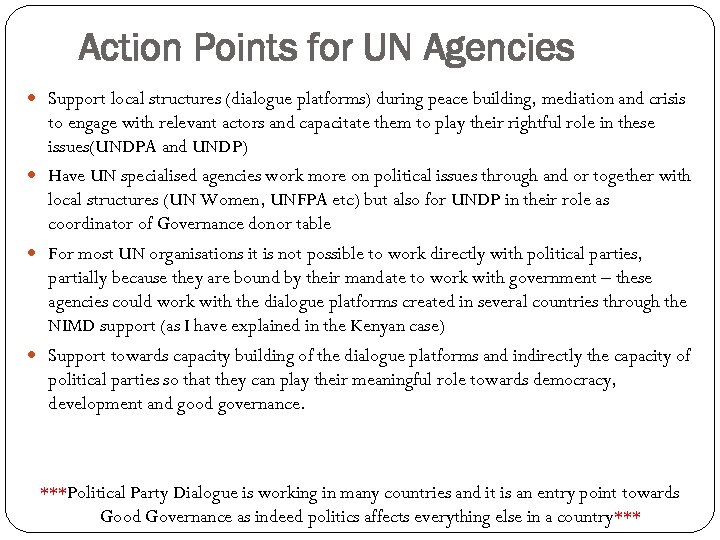 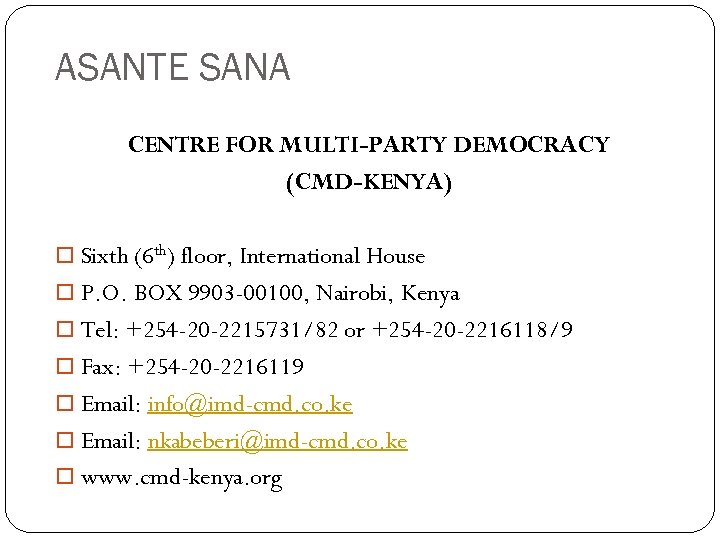 KENYA: POLITICAL LANDSCAPE • Kenya’s Independence from Britain in 1963: We are a Multi- party state with Kenya National African Union (KANU) being the front runner. • The bliss of multi-party politics ends in 1969, with key opposition leaders being arrested and detained without trial the country becomes de facto one party state. • Following the attempted coup in 1982: The situation for multi- party politics becomes even worse; in June 1982, the National Assembly officially declares a one party state by amending the law, making Kenya a de jure one party state.

POLITICAL LANDSCAPE CONTINUED In December 1991; Parliament annuls the one party section of the Constitution and Kenya returns to multi-party politics. The 2002 General Elections is the 3 rd one since the onset of multi-party politics. The National Rainbow Coalition (NARC) finally rid the nation of what was globally perceived as a KANU dictatorship.

HIGHLIGHT MOMENTS FOR CMD-KENYA ‘Dialogue is not one more way: its the only way’! This was the position held by CMD and its partners in the Kofi Annan mediated talks of January-February 2008. CMD was at the forefront of supporting the 2010 Constitution Process and accompanying Legal and Institutional Reforms CMD-Kenya: A platform of equals (big and small political parties are members of the centre) CMD-Kenya has Sustainable Structures and early buy-ins at the onset in 2004 gave the members something to hold on to and defend. Facilitation skills are key to a successful dialogue process

Evidence in my country has shown that development is related to politics and every time we have a weak political moment (2008) security, human rights and development are highly affected. DEVELOPMENT SECURITY POLITICS

“INSTITUTIONALIZATION OF POLITICAL PARTIES” THE CASE OF CMD-KENYA 1. Direct support to political party leadership and party cadres: Bilateral and Cross party programs 2. Inclusivity: Gender mainstreaming in politics, Youth in political parties, participation of minorities and PWDs 4. Communicating effectively to the outside publics/internally 5. Contribution and support to the Political Parties Act (PPA 2007 and 2011) 6. Issues of national importance: Conflict Mitigation, Constitution, Memorization of our history, building bridges of understanding

NEXT STEPS Leadership Institute for Political Parties! Actualization of the 2/3 rds gender rule in the political arena Continued support of the Dialogue Platform National and County level Support A new breed of political leadership: Youth and Communication capacity building Implementation of a new constitution

LEADERSHIP INSTITUTE FOR POLITICAL PARTIES AND PRACTIONERS IMPLEMENTATION OF THE NEW CONSTITTUTION A NEW BREED OF POLITITICAL LEADERSHIP: YOUTH AND COMMUNICATION CAPACITY BUILDING CONTINUED SUPPORT OF THE DIALOGUE PLATFORM ACTUALIZATION OF THE 2/3 RDS GENDER RULE IN THE POLITICAL ARENA NATIONAL AND COUNTY LEVEL SUPPORT (DEVOLUTION)

Action Points for UN Agencies Support local structures (dialogue platforms) during peace building, mediation and crisis to engage with relevant actors and capacitate them to play their rightful role in these issues(UNDPA and UNDP) Have UN specialised agencies work more on political issues through and or together with local structures (UN Women, UNFPA etc) but also for UNDP in their role as coordinator of Governance donor table For most UN organisations it is not possible to work directly with political parties, partially because they are bound by their mandate to work with government – these agencies could work with the dialogue platforms created in several countries through the NIMD support (as I have explained in the Kenyan case) Support towards capacity building of the dialogue platforms and indirectly the capacity of political parties so that they can play their meaningful role towards democracy, development and good governance. ***Political Party Dialogue is working in many countries and it is an entry point towards Good Governance as indeed politics affects everything else in a country***

The modern political party system in the

The Communist party of Kazakhstan The