Kazakhstan is located on the junction of 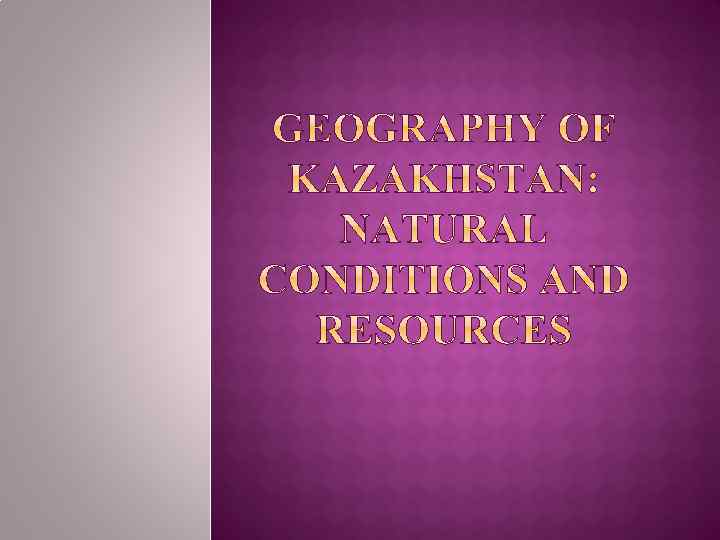 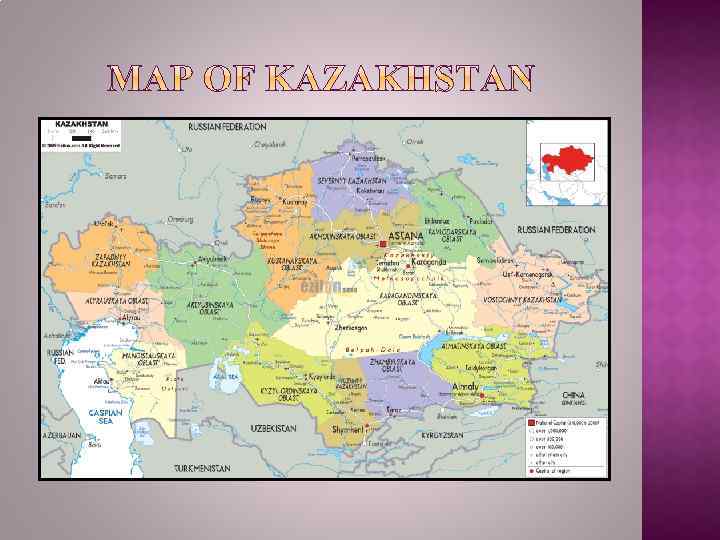 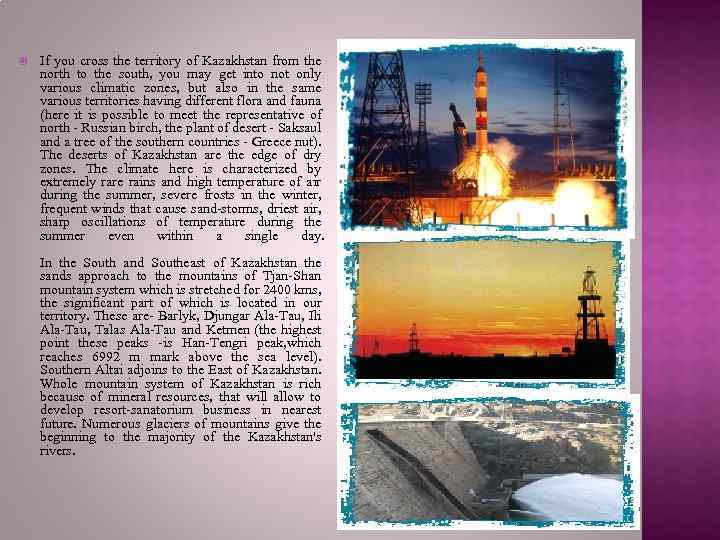 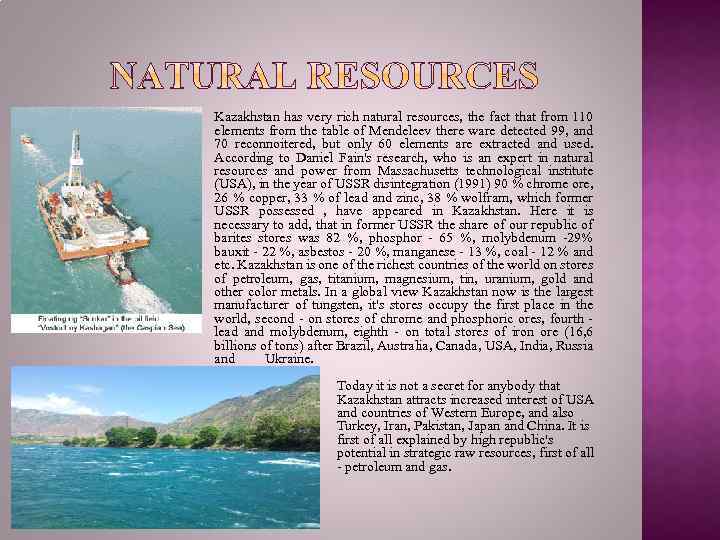 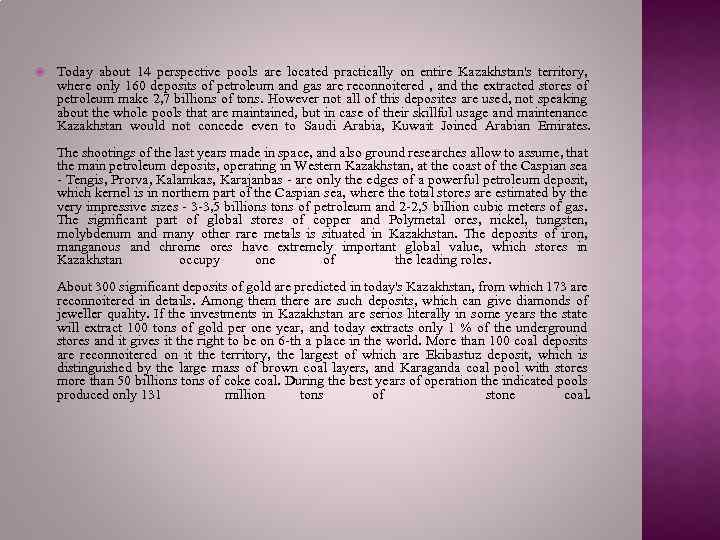 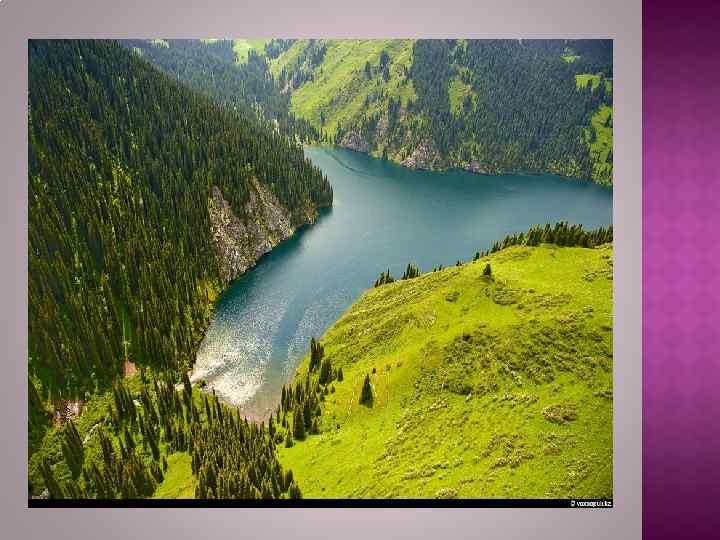 Скачать презентацию Kazakhstan is located on the junction of

Kazakhstan is located on the junction of two continents - Europe and Asia, between 45 and 87 degrees of east longitude, 40 and 55 degrees of northern breadth. The geographical center of the European-Asian subcontinent is in Kazakhstan (on an intersection 78 meridians with 50 parallel) - in epicenter of former Semipalatinsk nuclear zone. Kazakhstan occupies a square equal to 2724, 9 thousand sq. km. (1048, 3 thousand sq. miles) also is stretching to east from the Caspian sea and Volga's of plains up to mountain Altai from Tjan-Shan foothills in the south and southeast up to the West-Siberian lowland in north. The extent of it's territory exceeds 3000 kms from west to east (1150 miles), from the south to north - 1700 kms (650 miles). Kazakhstan is on the ninth place in the world considering the territiry occupied, i. e. USA, Brazil, Australia, India and Argentina enter the top ten of largest states of the world - after Russia, Canada, China. On Kazakhstan's territory can contain seven largest European states as France, Spain, Sweden, Germany, Finland, Italy and Great Britain, or such states of Asia, as Pakistan, Turkey, Iraq, Japan and Vietnam taken together. Only this can testify the huge potential possibilities of the this region on the globe.

Kazakhstan is situated in the center of the Euro asian continent, at almost equal distance from the Atlantic and Pacific oceans, and is also considerably distant from the Indian ocean. Such deep continental layout appreciably determines it natural conditions. More then a quarter of Kazakhstan's territory are occupied with steppes, half - with deserts and half-deserts, other quarter - with mountains, sea, lakes and rivers. There almost 22 млн. Hectares of woods and plantings in kazakhstan, there are 11 thousands of the rivers and streams, more than 7 thousands of lakes and reservoirs; the vegetative fund exceeds 6 thousands of species, also the animal world is various. The relief of the area rises from extensive lowlands located below the level of an ocean, to highest mountain pikes, reaching 5000 meters level. The territory of it is divided from north to the south by the following natureclimatic zones: steppe-forest, steppe, half-desert, foothill and mountain zone. In the territory of Kazakhstan located between two rather various regions of Eurasia - Central Asia and Siberia the influences of air masses of cold north and hot south cross. That is why main Kazakhstan's nature properties are it's sharp continental type and non-uniform allocation of natural deposits. In some years the spring moves from the south to north for 1, 5 - 2 months (when in the south the spring sowing is held, in the North the soils happens to be still frozen and covered by ice and frequent storm snow blizzards). The soils of Kazakhstan are represented by various types: the most part of steppe-forest zone is occupied by dark soils, there are dark-brown in the south , also light-brown and brown soils. The soil of deserts and half-deserts is represented by gray type.

If you cross the territory of Kazakhstan from the north to the south, you may get into not only various climatic zones, but also in the same various territories having different flora and fauna (here it is possible to meet the representative of north - Russian birch, the plant of desert - Saksaul and a tree of the southern countries - Greece nut). The deserts of Kazakhstan are the edge of dry zones. The climate here is characterized by extremely rare rains and high temperature of air during the summer, severe frosts in the winter, frequent winds that cause sand-storms, driest air, sharp oscillations of temperature during the summer even within a single day. In the South and Southeast of Kazakhstan the sands approach to the mountains of Tjan-Shan mountain system which is stretched for 2400 kms, the significant part of which is located in our territory. These are- Barlyk, Djungar Ala-Tau, Ili Ala-Tau, Talas Ala-Tau and Ketmen (the highest point these peaks -is Han-Tengri peak, which reaches 6992 m mark above the sea level). Southern Altai adjoins to the East of Kazakhstan. Whole mountain system of Kazakhstan is rich because of mineral resources, that will allow to develop resort-sanatorium business in nearest future. Numerous glaciers of mountains give the beginning to the majority of the Kazakhstan's rivers.

There are extensive reservoirs and a set of rivers in Kazakhstan. In the West and Southwest of our territory at a 2340 kms length, almost from great Russian river Volga to the gulf of Kara. Bogas-Gal in Turkmenistan, the grounds of Kazakhstan are washed by the Caspian sea, that is the largest lake on Globe and is called "sea" for it's size. On Kazakhstan's territory the rivers of Ural with Ilek and Emba inflows run into the Caspian sea. Since 1978 there is a mass rise of Caspian's sea level with average speed of 13 -14 cm per year. For the time indicated the sea level has grown for 2, 5 meters, as a result of it the coastal line has moved closer for 20 -40 of kilometers. Scientists make a forecast that says the rise of Caspian's sea level will proceed during 25 -30 years. To the East from the Caspian sea, in sandy Aral desert there is a sea that once occupied 65 thousands of square miles in the middle of ЗО-х of present century (today only a half of it left). In 60 - 80's the fresh water inflow through main channels - Amu-Daria and Syr-Daria rivers decreased, also the water inflow from Middle Asia (Chu, Talas and Sary. Su rivers) disappered. All that caused such pitiful situation of a Great Lake we have to come across today. In Southern sands of central Kazakhstan you can find one more lake - Balhash, which current area is about 18, 2 thousands of square kilometers. The largest rivers of Kazakhstan are: Irtysh(total length: 4248 km, 1700 km of length is referred to Kazakhstan), Ishim(2450 and 1400 km accordingly), Ural (2428 and 1082 km), Syr. Daria (2219 and 1400 km), Ili(1001 and 815), Chu(1186 and 800), Tobol(1191 and 800), Mura(all 978 km in republic's territory). One of main riches of Kazakhstan is it's minerals. According to the world's leading scientists research Kazakhstan occupies the sixth place in the world on it's stores of natural resources, though yet can not use this advantage with maximum for itself effect. The precounts of some scientists tell that reconnoitered mineral sources in Kazakhstan are estimated approximately in 10 billions US dollars.

Kazakhstan has very rich natural resources, the fact that from 110 elements from the table of Mendeleev there ware detected 99, and 70 reconnoitered, but only 60 elements are extracted and used. According to Daniel Fain's research, who is an expert in natural resources and power from Massachusetts technological institute (USA), in the year of USSR disintegration (1991) 90 % chrome ore, 26 % copper, 33 % of lead and zinc, 38 % wolfram, which former USSR possessed , have appeared in Kazakhstan. Here it is necessary to add, that in former USSR the share of our republic of barites stores was 82 %, phosphor - 65 %, molybdenum -29% bauxit - 22 %, asbestos - 20 %, manganese - 13 %, coal - 12 % and etc. Kazakhstan is one of the richest countries of the world on stores of petroleum, gas, titanium, magnesium, tin, uranium, gold and other color metals. In a global view Kazakhstan now is the largest manufacturer of tungsten, it's stores occupy the first place in the world, second - on stores of chrome and phosphoric ores, fourth lead and molybdenum, eighth - on total stores of iron ore (16, 6 billions of tons) after Brazil, Australia, Canada, USA, India, Russia and Ukraine. Today it is not a secret for anybody that Kazakhstan attracts increased interest of USA and countries of Western Europe, and also Turkey, Iran, Pakistan, Japan and China. It is first of all explained by high republic's potential in strategic raw resources, first of all - petroleum and gas.

Today about 14 perspective pools are located practically on entire Kazakhstan's territory, where only 160 deposits of petroleum and gas are reconnoitered , and the extracted stores of petroleum make 2, 7 billions of tons. However not all of this deposites are used, not speaking about the whole pools that are maintained, but in case of their skillful usage and maintenance Kazakhstan would not concede even to Saudi Arabia, Kuwait Joined Arabian Emirates. The shootings of the last years made in space, and also ground researches allow to assume, that the main petroleum deposits, operating in Western Kazakhstan, at the coast of the Caspian sea - Tengis, Prorva, Kalamkas, Karajanbas - are only the edges of a powerful petroleum deposit, which kernel is in northern part of the Caspian sea, where the total stores are estimated by the very impressive sizes - 3 -3, 5 billions tons of petroleum and 2 -2, 5 billion cubic meters of gas. The significant part of global stores of copper and Polymetal ores, nickel, tungsten, molybdenum and many other rare metals is situated in Kazakhstan. The deposits of iron, manganous and chrome ores have extremely important global value, which stores in Kazakhstan occupy one of the leading roles. About 300 significant deposits of gold are predicted in today's Kazakhstan, from which 173 are reconnoitered in details. Among them there are such deposits, which can give diamonds of jeweller quality. If the investments in Kazakhstan are serios literally in some years the state will extract 100 tons of gold per one year, and today extracts only 1 % of the underground stores and it gives it the right to be on 6 -th a place in the world. More than 100 coal deposits are reconnoitered on it the territory, the largest of which are Ekibastuz deposit, which is distinguished by the large mass of brown coal layers, and Karaganda coal pool with stores more than 50 billions tons of coke coal. During the best years of operation the indicated pools produced only 131 million tons of stone coal.

Kazakhstan is also rich by and stores chemical raw material: there are richest deposits potassium and other salts, boron, bromine connections , sulphates, phosphorites, diversified raw material for varnish and paint industry. The enormous stores of sulfuric pyrites in the structure of polymetal ores allow to widely organize production of a sulfuric acid and other chemical products, extremely important for economy. The unlimited possibilities are available on production almost of all sorts of products of petrochemical synthesis (especially ethylene, polypropylene, rubber), synthetic washing tools and soap, fodder microbiological fiber, chemical fibres and strings, synthetic pitches and plastic weights, cement. Kazakhstan has richest raw resources for glass and porcelaindelftware industry. The most rare jewels, diversified building and facing materials are comprised in it's earth and mountains. Other infinite riches of the Kazakh earth are mineral, medical, industrial and termal water, which do not find yet a wide application.

The socio-economic, political and cultural achievements of the

Презентация What role does Kazakhstan play in oil