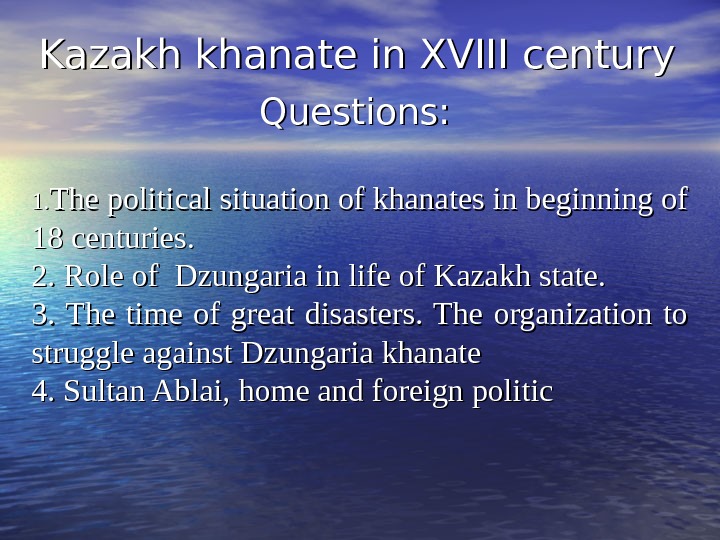 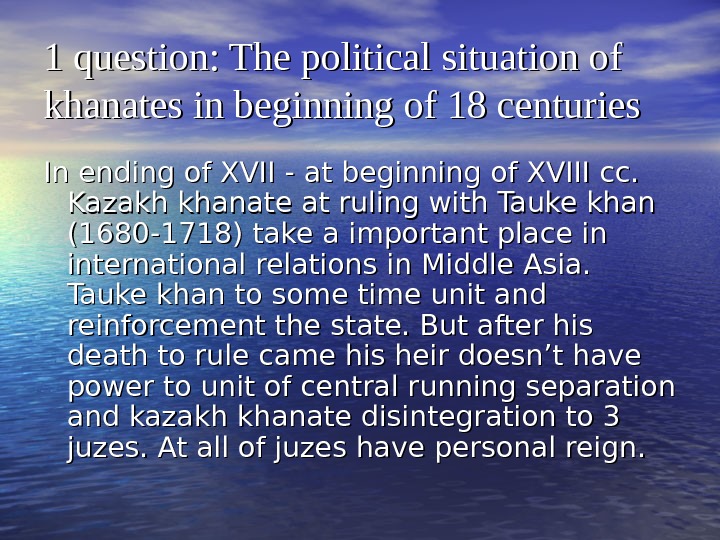 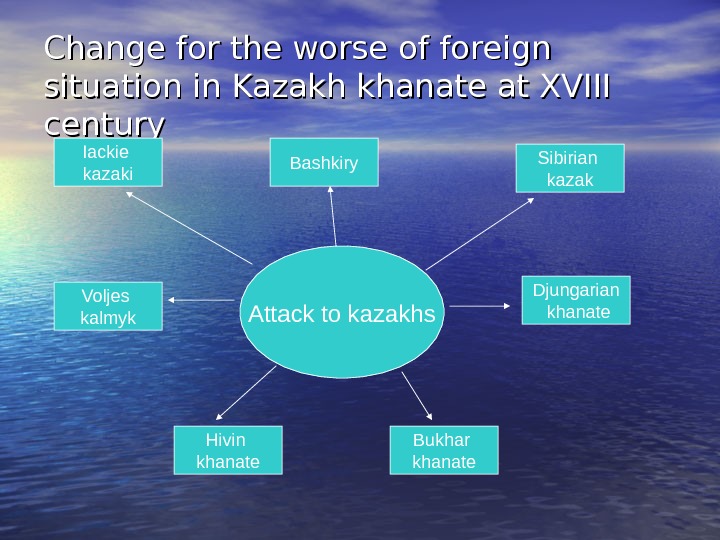 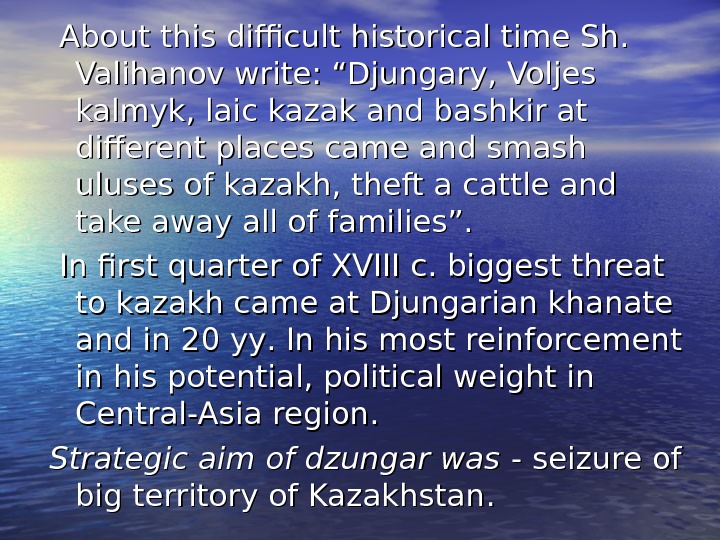 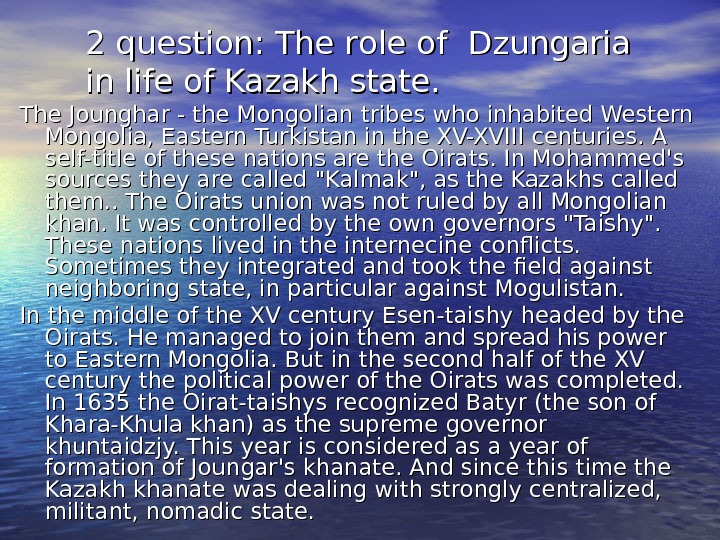 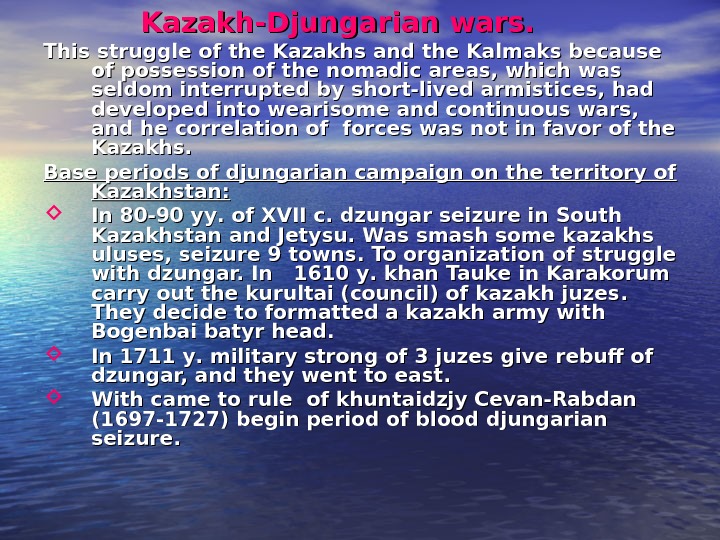 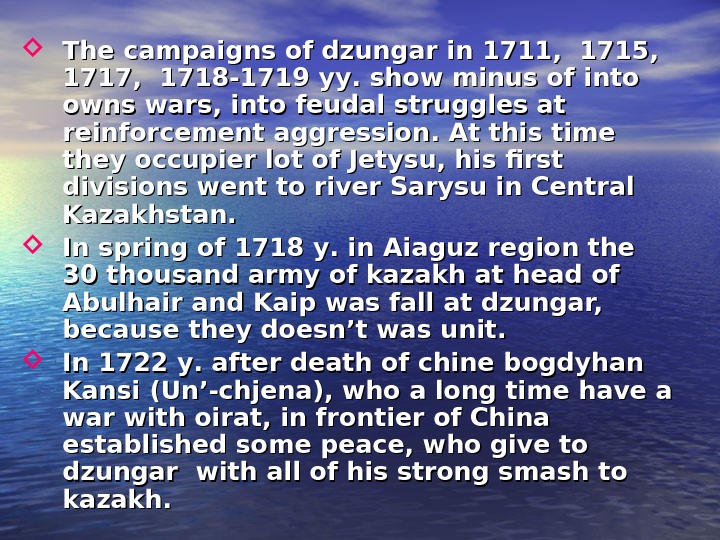 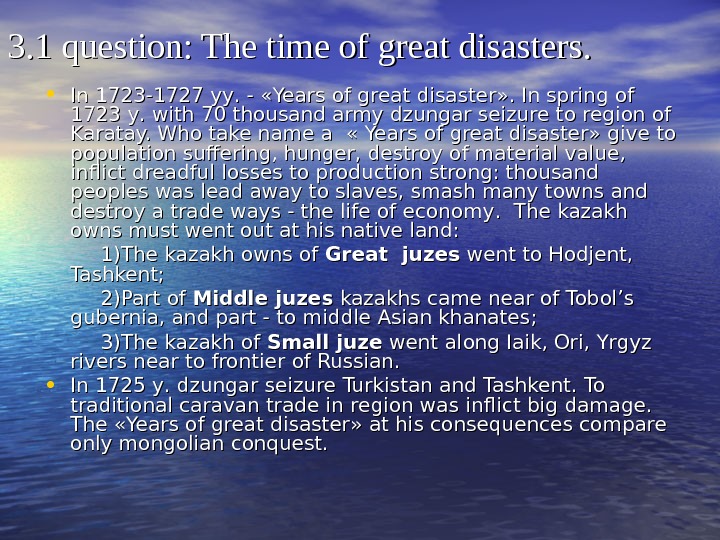 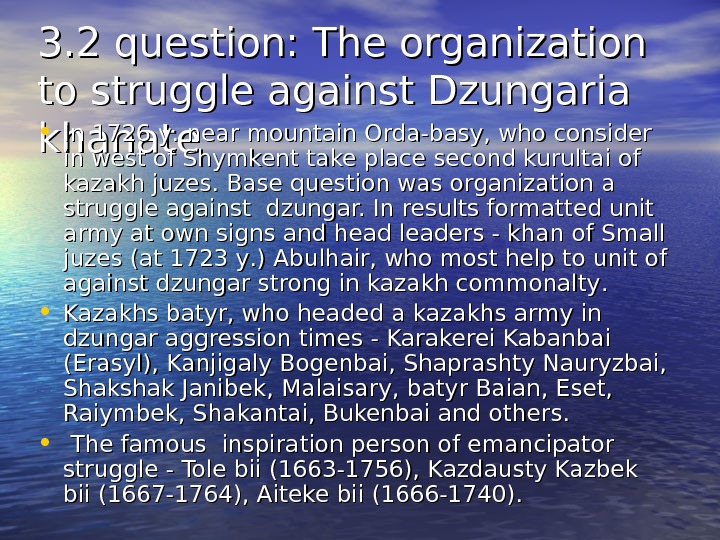 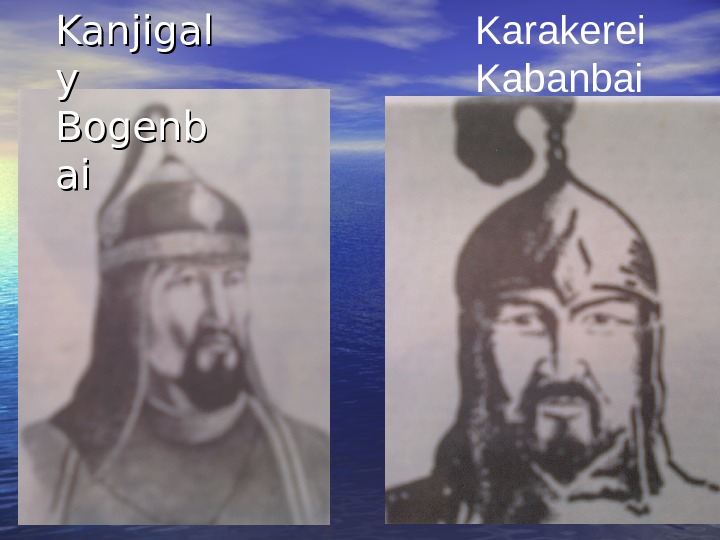 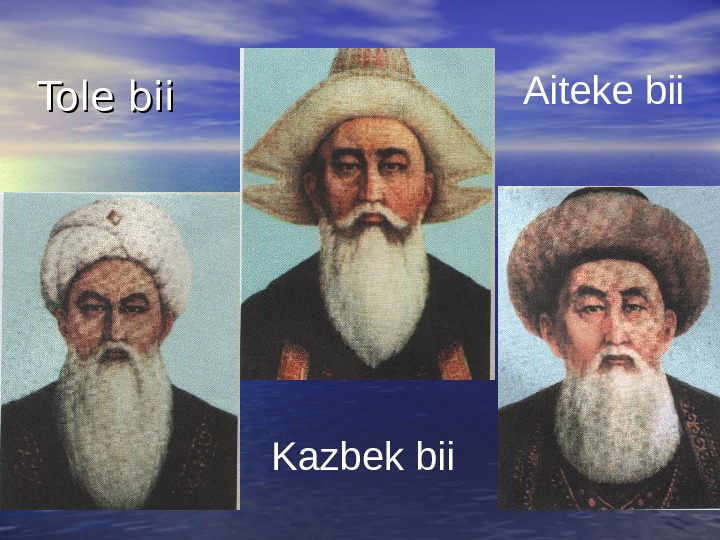 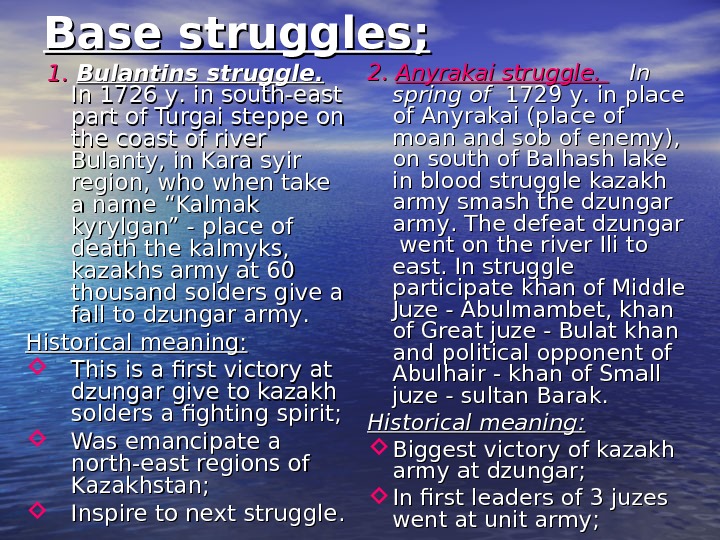 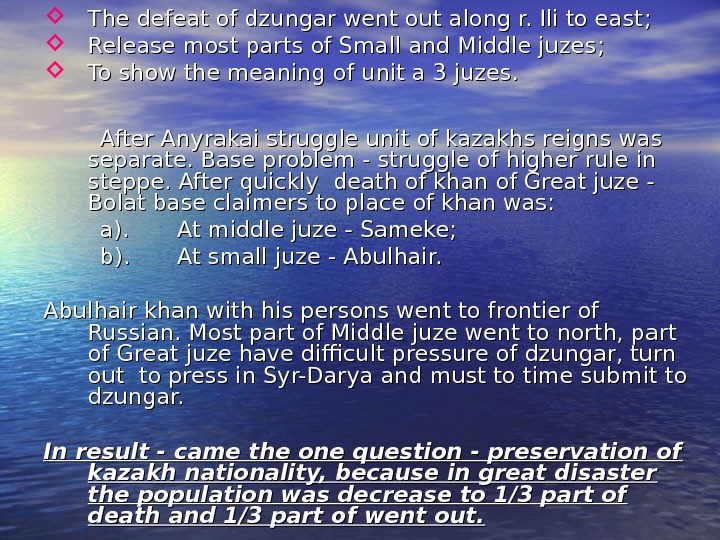 Kazakh khanate in XVIII century Questions: 1. 1. The political situation of khanates in beginning of 18 centuries. 2. Role of Dzungaria in life of Kazakh state. 3. The time of great disasters. The organization to struggle against Dzungaria khanate 44. . Sultan Ablai, home and foreign politic

1 question: The political situation of khanates in beginning of 18 centuries In ending of XVII — — at beginning of XVIII cccc. . Kazakh khanate at ruling with Tauke khan (1680 -1718) take a important place in international relations in Middle Asia. Tauke khan to some time unit and reinforcement the state. But after his death to rule came his heir doesn’t have power to unit of central running separation and kazakh khanate disintegration to 3 juzes. At all of juzes have personal reign. .

About this difficult historical time Sh. Valihanov write: “Djungary, Voljes kalmyk, laic kazak and bashkir at different places came and smash uluses of kazakh, theft a cattle and take away all of families”. In first quarter of XVIII cc. . biggest threat to kazakh came at Djungarian khanate and in 20 20 yyyy. . In his most reinforcement in his potential, political weight in Central-Asia region. . Strategic aim of dzungar was — — seizure of big territory of Kazakhstan. .

2 question: The r ole of Dzungaria in life of Kazakh state. The Jounghar — the Mongolian tribes who inhabited Western Mongolia, Eastern Turkistan in the XV-XVIII centuries. A self-title of these nations are the Oirats. In Mohammed’s sources they are called «Kalmak», as the Kazakhs called them. . The Oirats union was not ruled by all Mongolian khan. It was controlled by the own governors «Taishy». These nations lived in the internecine conflicts. Sometimes they integrated and took the field against neighboring state, in particular against Mogulistan. In the middle of the XV century Esen-taishy headed by the Oirats. He managed to join them and spread his power to Eastern Mongolia. But in the second half of the XV century the political power of the Oirats was completed. In 1635 the Oirat-taishys recognized Batyr (the son of Khara-Khula khan) as the supreme governor khuntaidzjy. This year is considered as a year of formation of Joungar’s khanate. And since this time the Kazakh khanate was dealing with strongly centralized, militant, nomadic state.

Kazakh-Djungarian wars. This struggle of the Kazakhs and the Kalmaks because of possession of the nomadic areas, which was seldom interrupted by short-lived armistices, had developed into wearisome and continuous wars, and he correlation of forces was not in favor of the Kazakhs. Base periods of djungarian campaign on the territory of Kazakhstan: In In 80 -90 yyyy. . of XVII cc. . dzungar seizure in South Kazakhstan and Jetysu. Was smash some kazakhs uluses, seizure 9 towns. . To organization of struggle with dzungar. In 1610 yy. . khan Tauke in Karakorum carry out the kurultai (council) of kazakh juzes. . They decide to formatted a kazakh army with Bogenbai batyr head. In In 1711 yy. . military strong of 3 juzes give rebuff of dzungar, and they went to east. . With came to rule of khuntaidzjy Cevan-Rabdan (1697 -1727) begin period of blood djungarian seizure. .

The campaigns of dzungar in 1711, 1715, 1717, 1718 -1719 yyyy. . show minus of into owns wars, into feudal struggles at reinforcement aggression. . At this time they occupier lot of Jetysu, his first divisions went to river Sarysu in Central Kazakhstan. In spring of 1718 yy. . in Aiaguz region the 30 thousand army of kazakh at head of Abulhair and Kaip was fall at dzungar, because they doesn’t was unit. In In 1722 yy. . after death of chine bogdyhan Kansi (Un’-chjena), who a long time have a war with oirat, in frontier of China established some peace, who give to dzungar with all of his strong smash to kazakh.

3. 1 question: The time of great disasters. • In In 1723 -1727 yyyy. — « Years of great disaster » . In spring of 1723 yy. . with 70 70 thousand army dzungar seizure to region of Karatay. Who take name a « « Years of great disaster » » give to population suffering, hunger, destroy of material value, inflict dreadful losses to production strong: thousand peoples was lead away to slaves, smash many towns and destroy a trade ways — the life of economy. . The kazakh owns must went out at his native land : : 1)The kazakh owns of Great juzes went to Hodjent, Tashkent ; ; 2)Part of Middle juzes kazakhs came near of Tobol’s gubernia, and part — to middle Asian khanates ; ; 3)The kazakh of Small juze went along Iaik, Ori, Yrgyz rivers near to frontier of Russian. . • In In 1725 yy. . dzungar seizure Turkistan and Tashkent. . To To traditional caravan trade in region was inflict big damage. The « « Years of great disaster » » at his consequences compare only mongolian conquest.

Base struggles ; ; 1. 1. Bulantins struggle. . In In 1726 yy. . in south — east part of Turgai steppe on the coast of river Bulanty, in Kara syir region, who when take a name “Kalmak kyrylgan” — place of death the kalmyks, kazakhs army at 60 thousand solders give a fall to dzungar army. . Historical meaning: This is a first victory at dzungar give to kazakh solders a fighting spirit ; ; Was emancipate a north-east regions of Kazakhstan ; ; Inspire to next struggle. . 2. 2. Anyrakai struggle. In spring of 1729 yy. . in place of Anyrakai (( place of moan and sob of enemy ), ), on south of Balhash lake in blood struggle kazakh army smash the dzungar army. . The defeat dzungar went on the river Ili to east. In struggle participate khan of Middle Juze — Abulmambet, khan of Great juze — Bulat khan and political opponent of Abulhair — khan of Small juze — sultan Barak. . Historical meaning : : Biggest victory of kazakh army at dzungar ; ; In first leaders of 3 juzes went at unit army ; ;

The defeat of dzungar went out along r. Ili to east ; ; Release most parts of Small and Middle juzes ; ; To show the meaning of unit a 3 juzes. After Anyrakai struggle unit of kazakhs reigns was separate. Base problem — struggle of higher rule in steppe. After quickly death of khan of Great juze — Bolat base claimers to place of khan was : : а). At middle juze — — Sameke ; ; bb ). ). At small juze — — Abulhair. Abulhair khan with his persons went to frontier of Russian. Most part of Middle juze went to north, part of Great juze have difficult pressure of dzungar, turn out to press in Syr-Darya and must to time submit to dzungar. In result — came the one question — preservation of kazakh nationality, because in great disaster the population was decrease to 1/3 part of death and 1/3 part of went out.