Kazakh Culture The Kazakhs are an 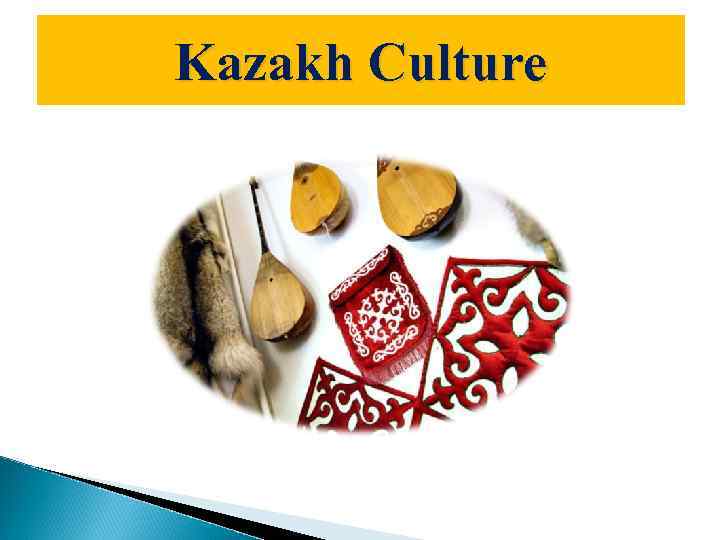 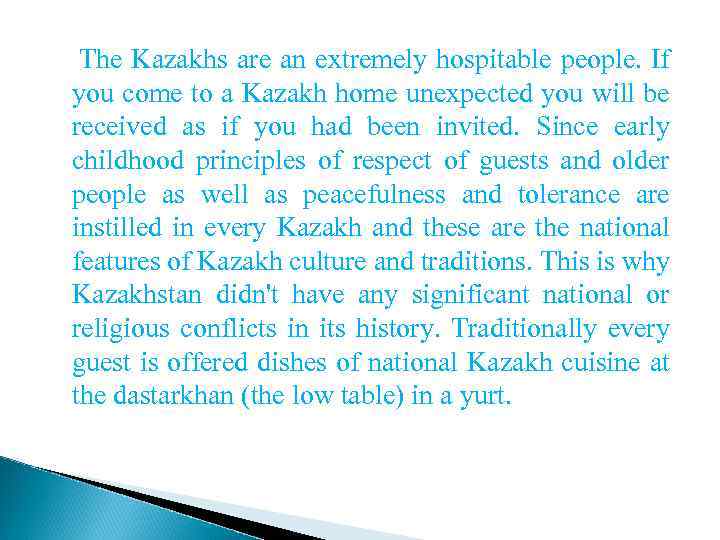 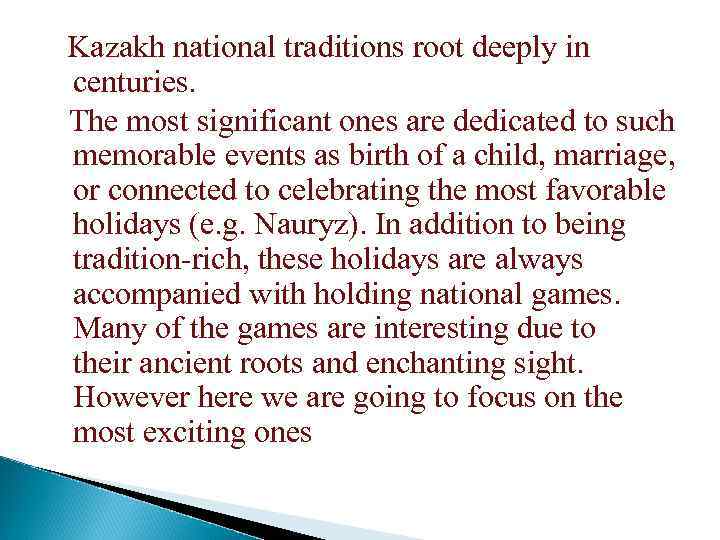 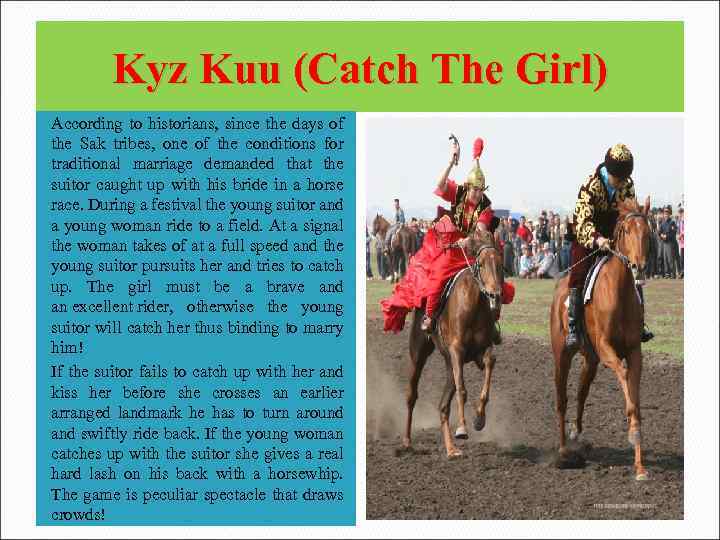 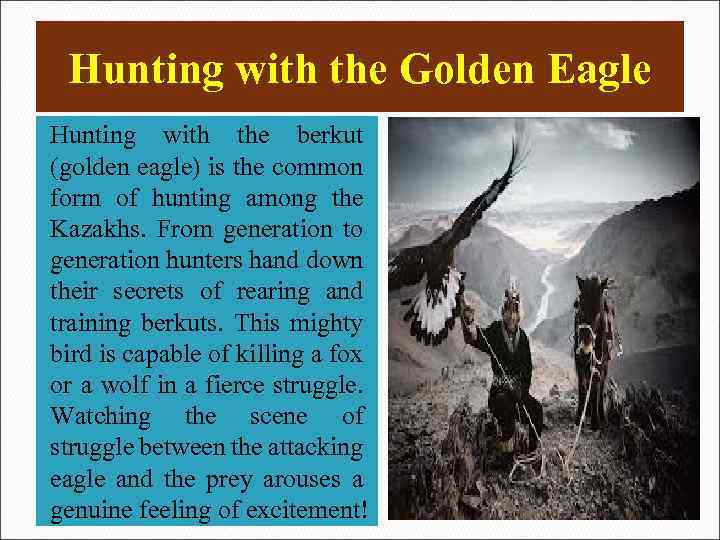 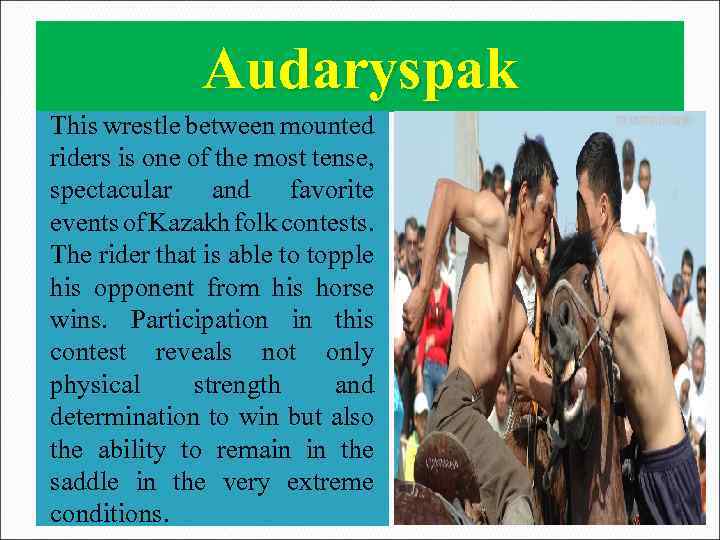 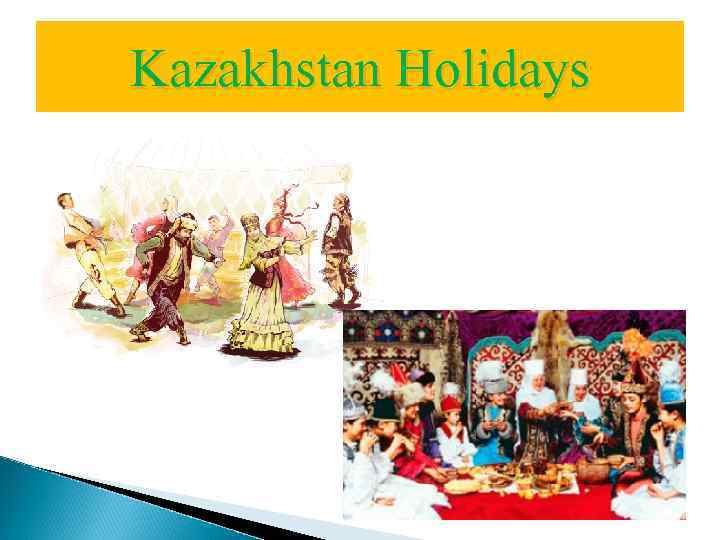 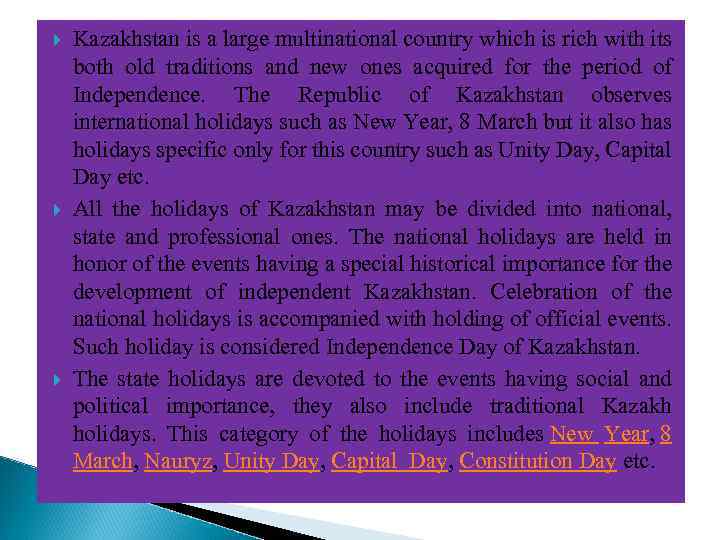 Скачать презентацию Kazakh Culture The Kazakhs are an

The Kazakhs are an extremely hospitable people. If you come to a Kazakh home unexpected you will be received as if you had been invited. Since early childhood principles of respect of guests and older people as well as peacefulness and tolerance are instilled in every Kazakh and these are the national features of Kazakh culture and traditions. This is why Kazakhstan didn't have any significant national or religious conflicts in its history. Traditionally every guest is offered dishes of national Kazakh cuisine at the dastarkhan (the low table) in a yurt.

Kazakh national traditions root deeply in centuries. The most significant ones are dedicated to such memorable events as birth of a child, marriage, or connected to celebrating the most favorable holidays (e. g. Nauryz). In addition to being tradition-rich, these holidays are always accompanied with holding national games. Many of the games are interesting due to their ancient roots and enchanting sight. However here we are going to focus on the most exciting ones

Kyz Kuu (Catch The Girl) According to historians, since the days of the Sak tribes, one of the conditions for traditional marriage demanded that the suitor caught up with his bride in a horse race. During a festival the young suitor and a young woman ride to a field. At a signal the woman takes of at a full speed and the young suitor pursuits her and tries to catch up. The girl must be a brave and an excellent rider, otherwise the young suitor will catch her thus binding to marry him! If the suitor fails to catch up with her and kiss her before she crosses an earlier arranged landmark he has to turn around and swiftly ride back. If the young woman catches up with the suitor she gives a real hard lash on his back with a horsewhip. The game is peculiar spectacle that draws crowds!

Hunting with the Golden Eagle Hunting with the berkut (golden eagle) is the common form of hunting among the Kazakhs. From generation to generation hunters hand down their secrets of rearing and training berkuts. This mighty bird is capable of killing a fox or a wolf in a fierce struggle. Watching the scene of struggle between the attacking eagle and the prey arouses a genuine feeling of excitement!

Kokpar is a team game. Up to 50 participants can compete for gaining a small goat carcass in the exausting multiple-hour riding. Upon a command the contestants rush to pick up the carcass of a young goat placed 50 -60 paces away from them. The game does not end by just picking the carcass since the rest of the contestants struggle to take it away from one another. The clashes on the field at times involve up to 20 -30 men. The contest may last for a few hours and the last person to get hold of the carcass either by strength or subtle means is the winner.

Audaryspak This wrestle between mounted riders is one of the most tense, spectacular and favorite events of Kazakh folk contests. The rider that is able to topple his opponent from his horse wins. Participation in this contest reveals not only physical strength and determination to win but also the ability to remain in the saddle in the very extreme conditions.

Kazakhstan is a large multinational country which is rich with its both old traditions and new ones acquired for the period of Independence. The Republic of Kazakhstan observes international holidays such as New Year, 8 March but it also has holidays specific only for this country such as Unity Day, Capital Day etc. All the holidays of Kazakhstan may be divided into national, state and professional ones. The national holidays are held in honor of the events having a special historical importance for the development of independent Kazakhstan. Celebration of the national holidays is accompanied with holding of official events. Such holiday is considered Independence Day of Kazakhstan. The state holidays are devoted to the events having social and political importance, they also include traditional Kazakh holidays. This category of the holidays includes New Year, 8 March, Nauryz, Unity Day, Capital Day, Constitution Day etc.

Lectures # 14: The culture in XIX century