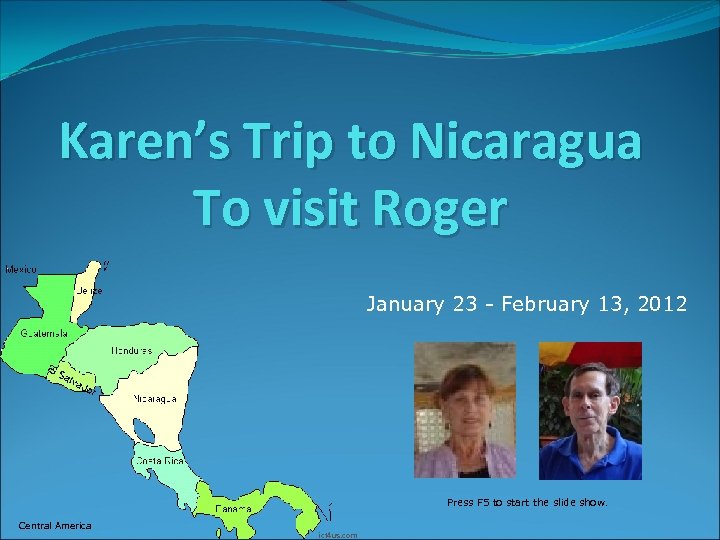 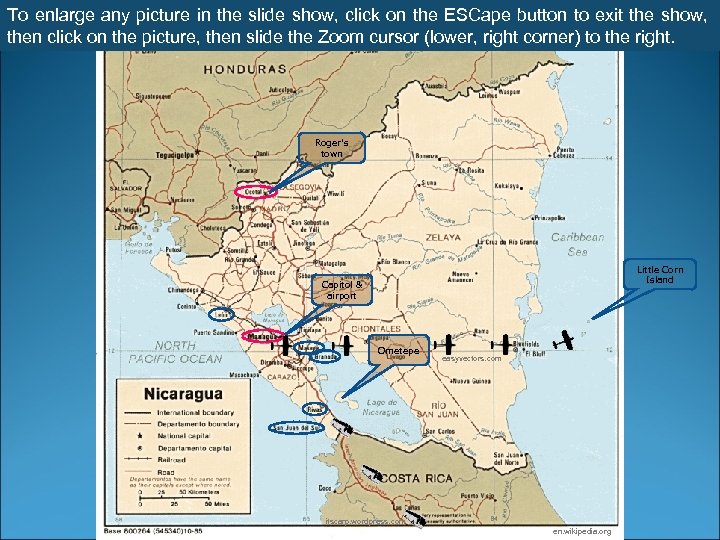 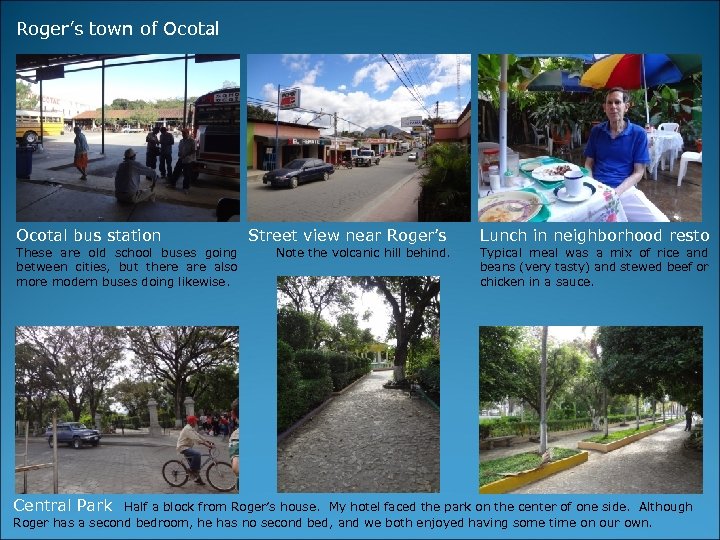 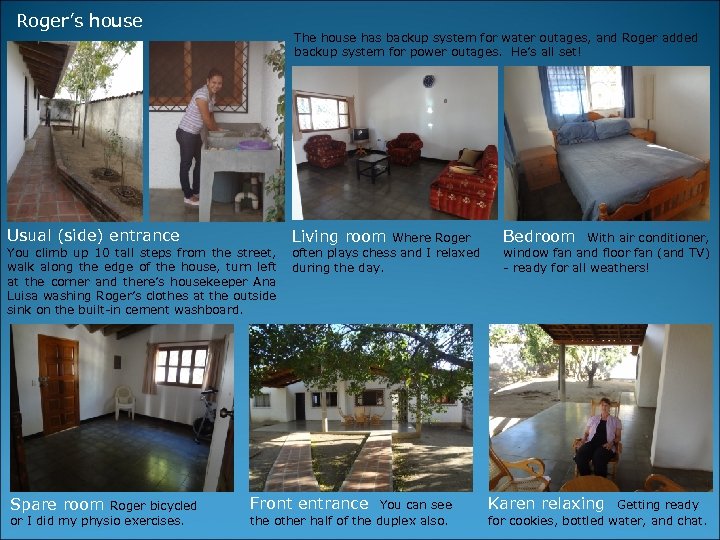 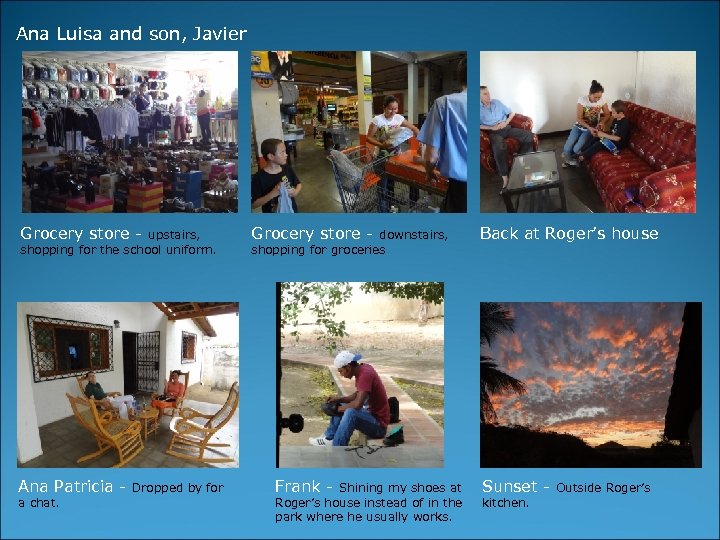 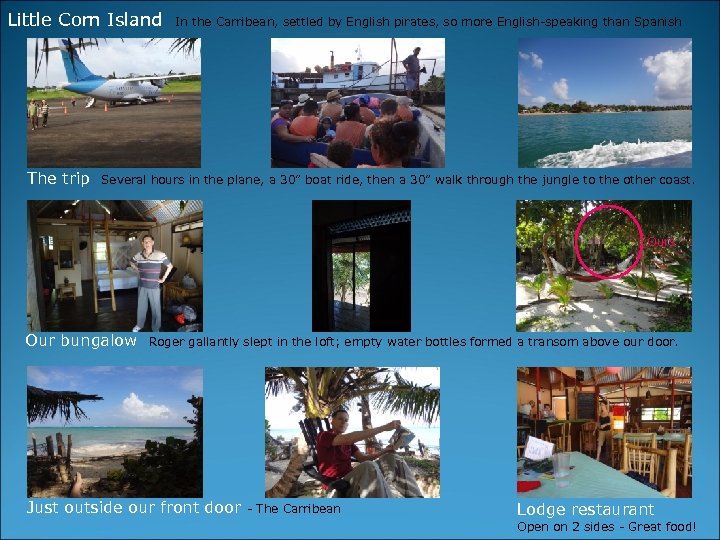 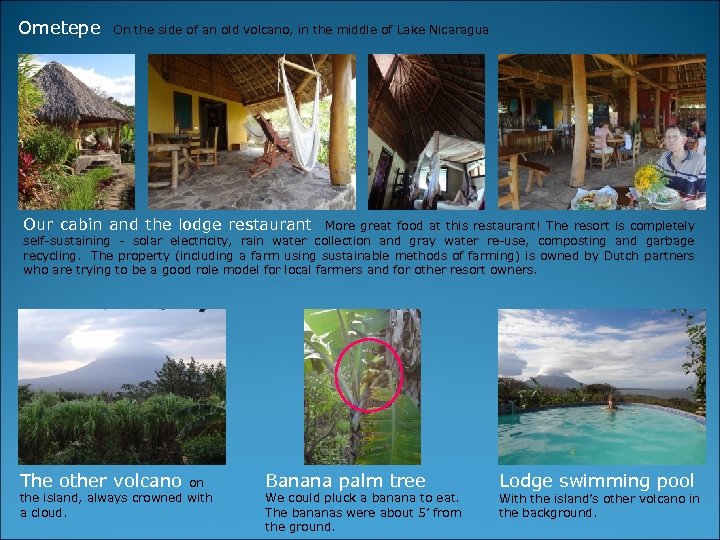 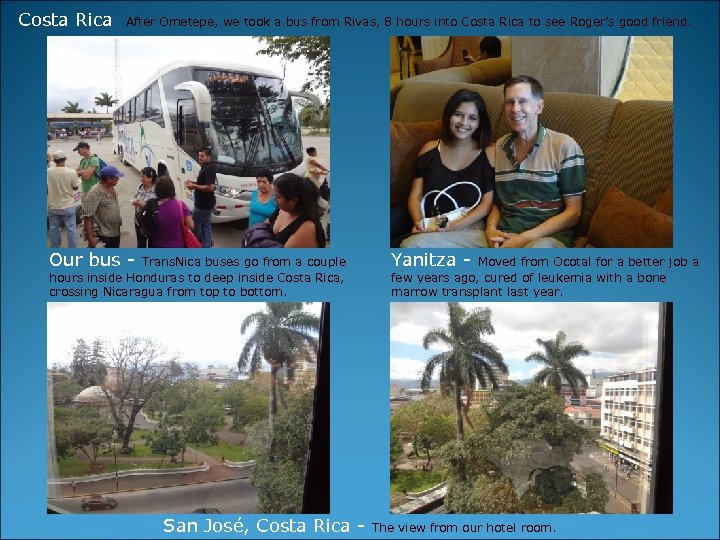 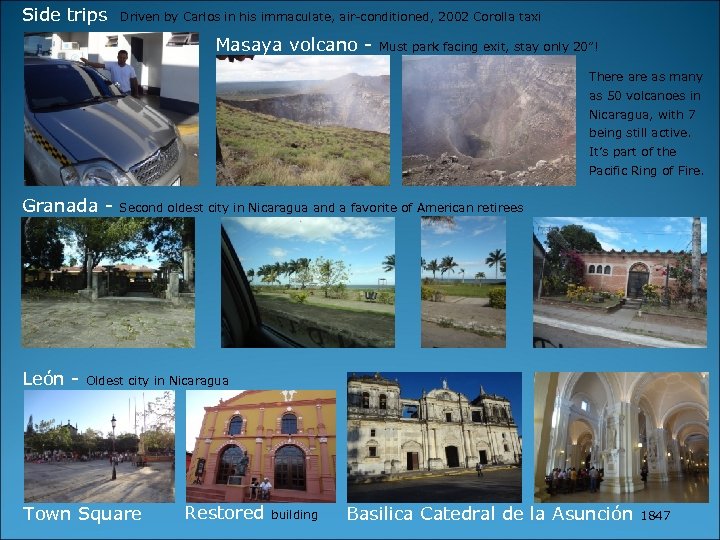 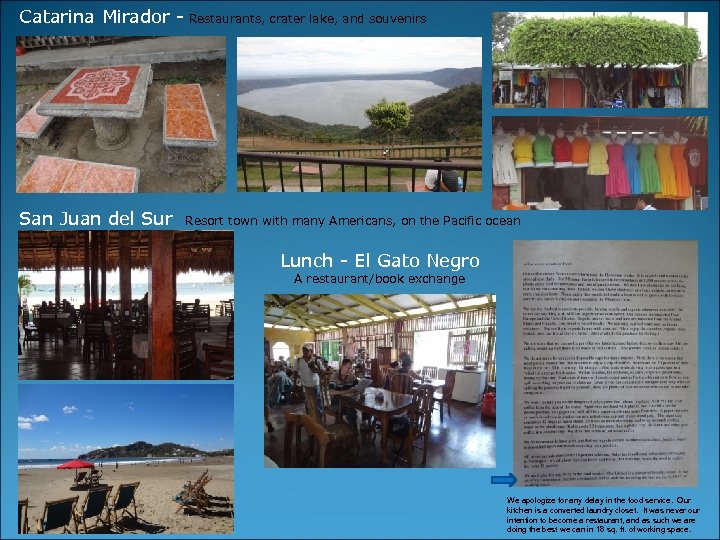 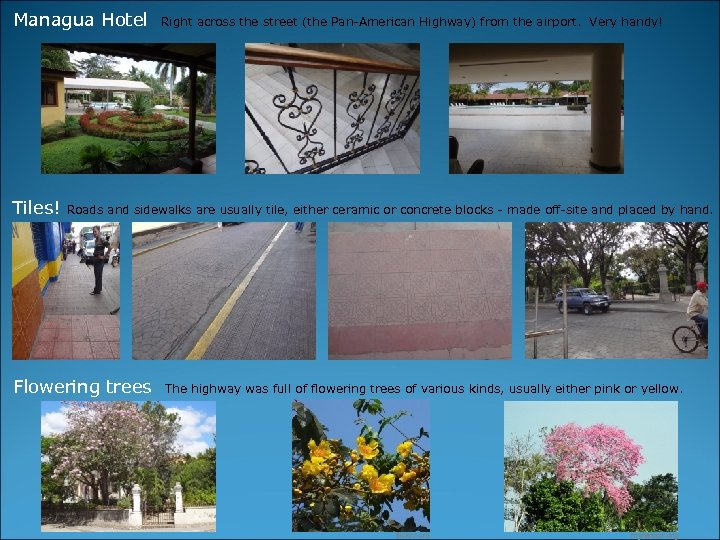 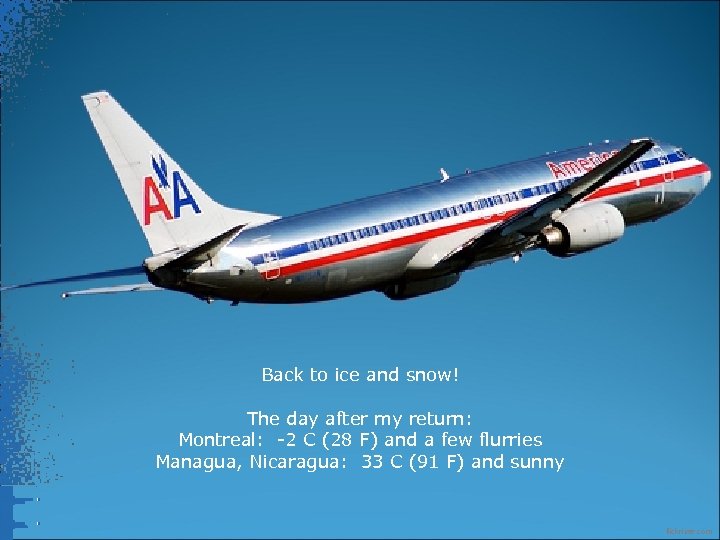 To enlarge any picture in the slide show, click on the ESCape button to exit the show, then click on the picture, then slide the Zoom cursor (lower, right corner) to the right. Roger’s town Little Corn Island Capitol & airport Ometepe easyvectors. com itscarp. wordpress. com en. wikipedia. org

Roger’s town of Ocotal bus station These are old school buses going between cities, but there also more modern buses doing likewise. Central Park Street view near Roger’s Note the volcanic hill behind. Lunch in neighborhood resto Typical meal was a mix of rice and beans (very tasty) and stewed beef or chicken in a sauce. Half a block from Roger’s house. My hotel faced the park on the center of one side. Although Roger has a second bedroom, he has no second bed, and we both enjoyed having some time on our own.

Roger’s house Usual (side) entrance The house has backup system for water outages, and Roger added backup system for power outages. He’s all set! You climb up 10 tall steps from the street, walk along the edge of the house, turn left at the corner and there’s housekeeper Ana Luisa washing Roger’s clothes at the outside sink on the built-in cement washboard. Spare room Roger bicycled or I did my physio exercises. Living room Where Roger often plays chess and I relaxed during the day. Front entrance You can see the other half of the duplex also. Bedroom With air conditioner, window fan and floor fan (and TV) - ready for all weathers! Karen relaxing Getting ready for cookies, bottled water, and chat.

Little Corn Island The trip In the Carribean, settled by English pirates, so more English-speaking than Spanish Several hours in the plane, a 30” boat ride, then a 30” walk through the jungle to the other coast. Ours Our bungalow Roger gallantly slept in the loft; empty water bottles formed a transom above our door. Just outside our front door - The Carribean Lodge restaurant Open on 2 sides - Great food!

Ometepe On the side of an old volcano, in the middle of Lake Nicaragua Our cabin and the lodge restaurant More great food at this restaurant! The resort is completely self-sustaining - solar electricity, rain water collection and gray water re-use, composting and garbage recycling. The property (including a farm using sustainable methods of farming) is owned by Dutch partners who are trying to be a good role model for local farmers and for other resort owners. The other volcano on the island, always crowned with a cloud. Banana palm tree We could pluck a banana to eat. The bananas were about 5’ from the ground. Lodge swimming pool With the island’s other volcano in the background.

Costa Rica After Ometepe, we took a bus from Rivas, 8 hours into Costa Rica to see Roger’s good friend. Our bus - Trans. Nica buses go from a couple hours inside Honduras to deep inside Costa Rica, crossing Nicaragua from top to bottom. San José, Costa Rica - Yanitza - Moved from Ocotal for a better job a few years ago, cured of leukemia with a bone marrow transplant last year. The view from our hotel room.

Side trips Driven by Carlos in his immaculate, air-conditioned, 2002 Corolla taxi Masaya volcano - Must park facing exit, stay only 20”! There as many as 50 volcanoes in Nicaragua, with 7 being still active. It’s part of the Pacific Ring of Fire. Granada - León - Second oldest city in Nicaragua and a favorite of American retirees Oldest city in Nicaragua Town Square Restored building Basilica Catedral de la Asunción 1847

Catarina Mirador - Restaurants, crater lake, and souvenirs San Juan del Sur Resort town with many Americans, on the Pacific ocean Lunch - El Gato Negro A restaurant/book exchange We apologize for any delay in the food service. Our kitchen is a converted laundry closet. It was never our intention to become a restaurant, and as such we are doing the best we can in 18 sq. ft. of working space.

Managua Hotel Tiles! Right across the street (the Pan-American Highway) from the airport. Very handy! Roads and sidewalks are usually tile, either ceramic or concrete blocks - made off-site and placed by hand. Flowering trees The highway was full of flowering trees of various kinds, usually either pink or yellow. flickr. com mynatour. org

York What springs to your mind when you