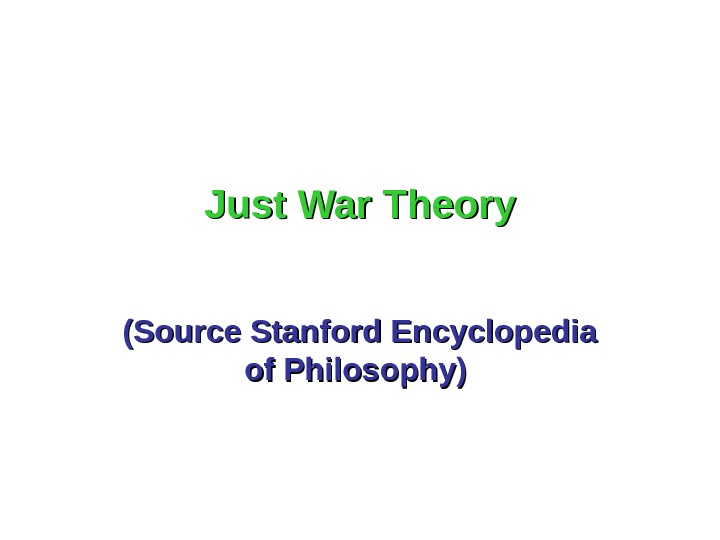 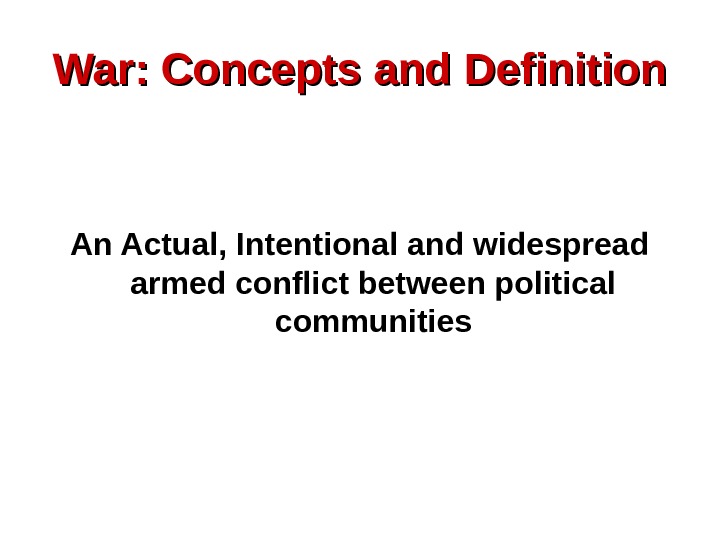 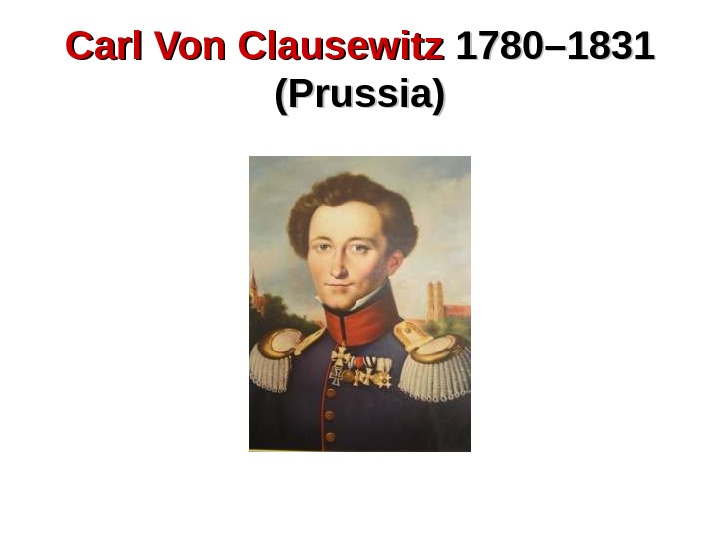 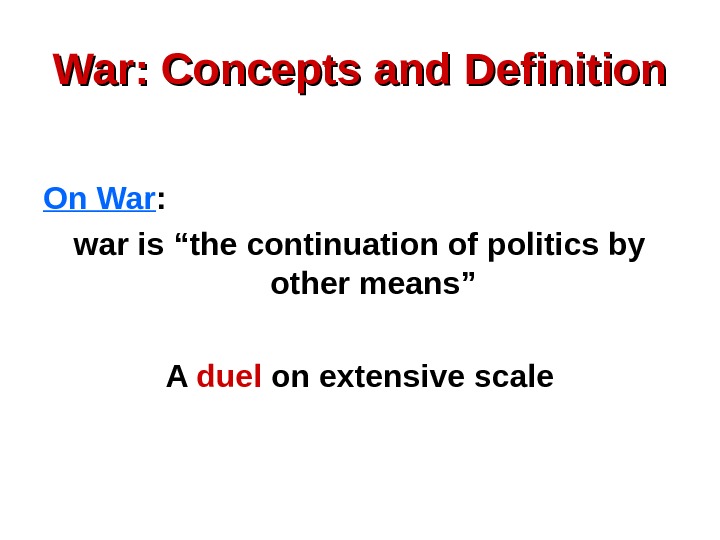 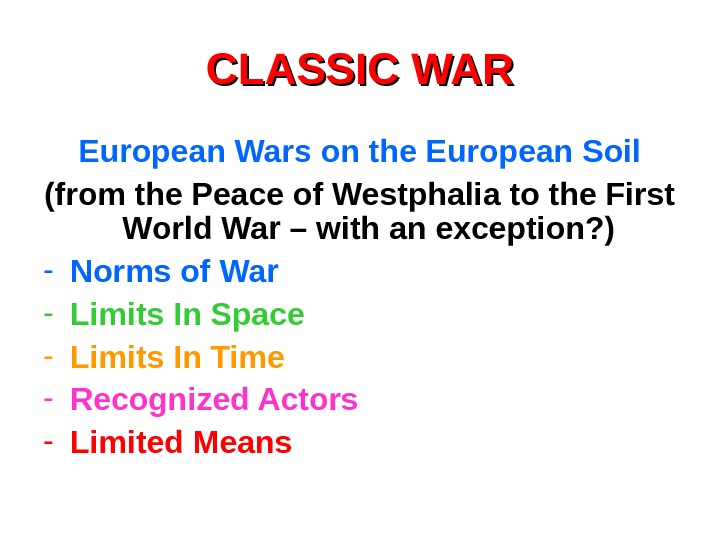 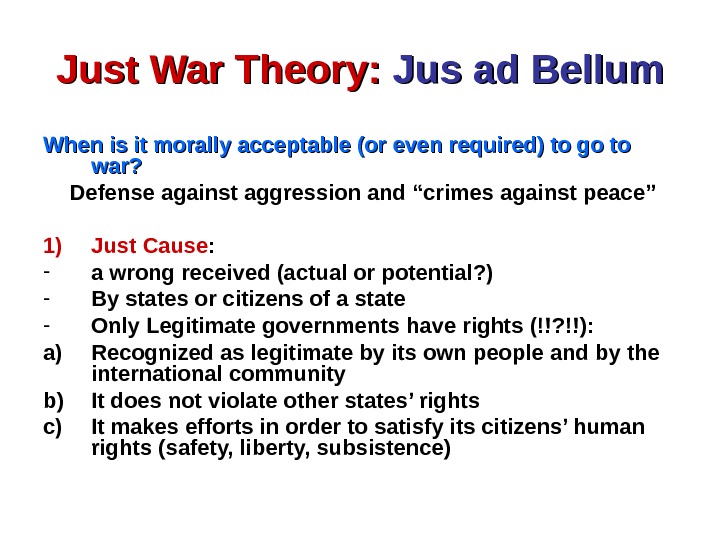 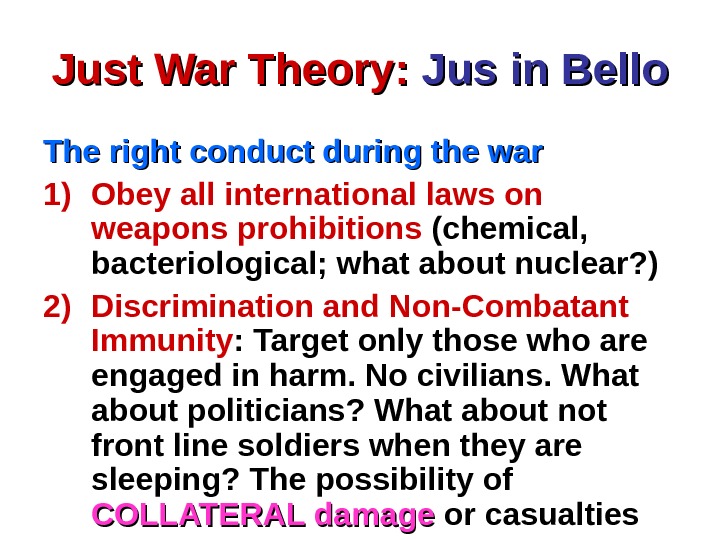 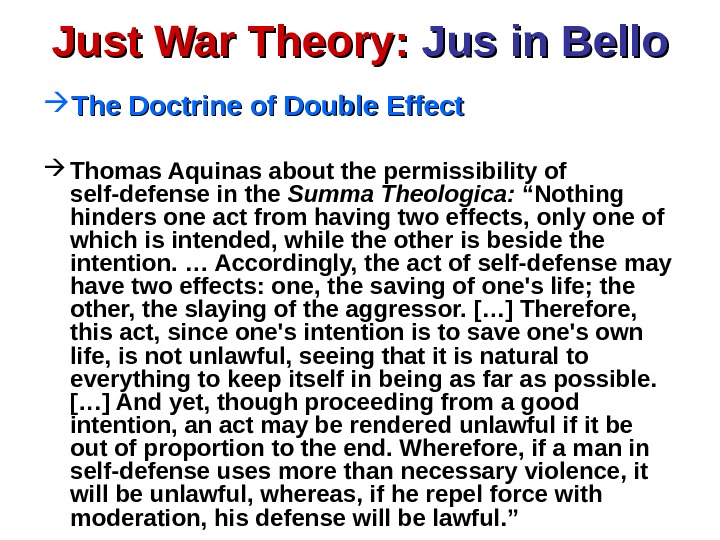 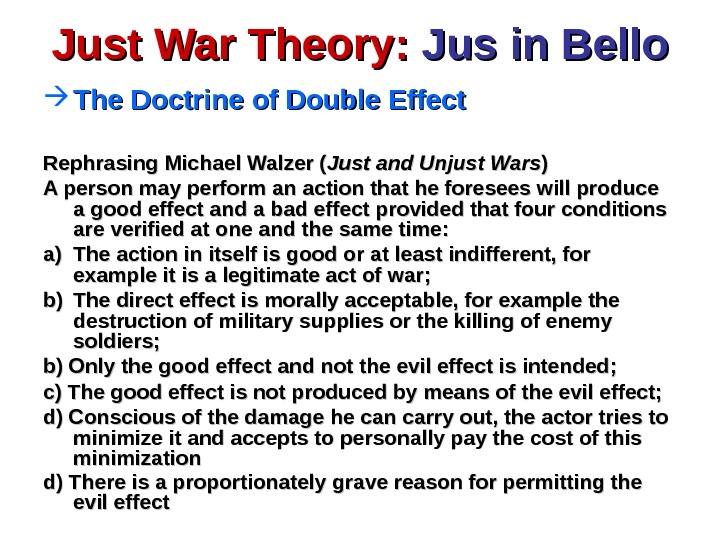 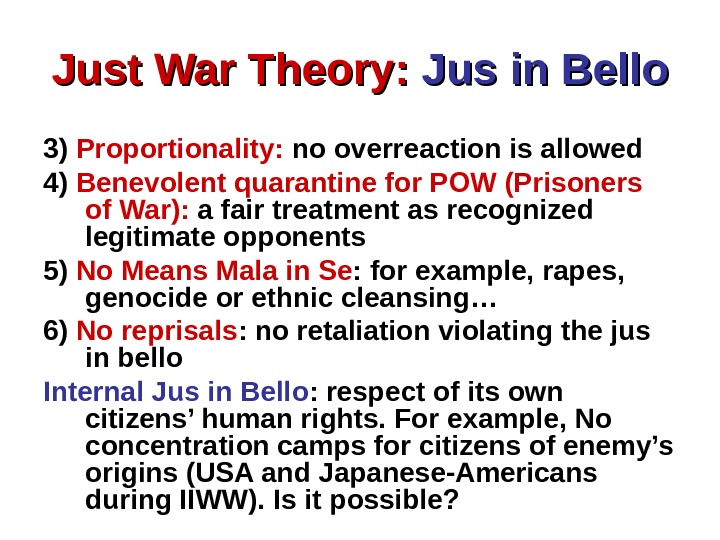 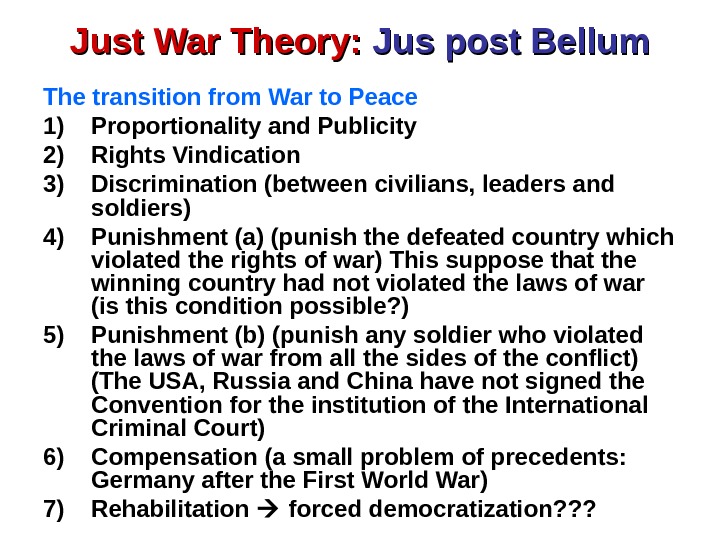 War: Concepts and Definition On War : war is “the continuation of politics by other means” A duel on extensive scale

CLASSIC WAR European Wars on the European Soil (from the Peace of Westphalia to the First World War – with an exception? ) — Norms of War — Limits In Space — Limits In Time — Recognized Actors — Limited Means

Just War Theory: Jus ad Bellum When is it morally acceptable (or even required) to go to war? Defense against aggression and “crimes against peace” 1) Just Cause : — a wrong received (actual or potential? ) — By states or citizens of a state — Only Legitimate governments have rights (!!? !!): a) Recognized as legitimate by its own people and by the international community b) It does not violate other states’ rights c) It makes efforts in order to satisfy its citizens’ human rights (safety, liberty, subsistence)

Just War Theory: Jus ad Bellum 2) Right Intention: only for the just cause, not ulterior motives like power, economy, land, revenge 3) Proper Authority and Public Declaration: only a state (? ) can go to war and only after a proper declaration

Just War Theory: Jus ad Bellum 4) Last Resort: since war is the most destructive action (where conflicting interests are resolved through organized violence), any possible alternative solution should be seek before resorting to war 5) Probability of Success: no waste of human lives is permissible. States should not start a war if there is not a possibility (? ) of changing the actual state of affaires 6) Proportionality : it is necessary to balance the expected goods against the expected evils

Just War Theory: Jus in Bello The right conduct during the war 1) Obey all international laws on weapons prohibitions (chemical, bacteriological; what about nuclear? ) 2) Discrimination and Non-Combatant Immunity : Target only those who are engaged in harm. No civilians. What about politicians? What about not front line soldiers when they are sleeping? The possibility of COLLATERAL damage or casualties

Just War Theory: Jus in Bello The Doctrine of Double Effect Thomas Aquinas about the permissibility of self-defense in the Summa Theologica: “Nothing hinders one act from having two effects, only one of which is intended, while the other is beside the intention. … Accordingly, the act of self-defense may have two effects: one, the saving of one’s life; the other, the slaying of the aggressor. […] Therefore, this act, since one’s intention is to save one’s own life, is not unlawful, seeing that it is natural to everything to keep itself in being as far as possible. […] And yet, though proceeding from a good intention, an act may be rendered unlawful if it be out of proportion to the end. Wherefore, if a man in self-defense uses more than necessary violence, it will be unlawful, whereas, if he repel force with moderation, his defense will be lawful. ”

Just War Theory: Jus in Bello The Doctrine of Double Effect Rephrasing Michael Walzer ( Just and Unjust Wars )) A person may perform an action that he foresees will produce a good effect and a bad effect provided that four conditions are verified at one and the same time: a)a) The action in itself is good or at least indifferent, for example it is a legitimate act of war; b)b) The direct effect is morally acceptable, for example the destruction of military supplies or the killing of enemy soldiers; b) Only the good effect and not the evil effect is intended; c) The good effect is not produced by means of the evil effect; d) Conscious of the damage he can carry out, the actor tries to minimize it and accepts to personally pay the cost of this minimization d) There is a proportionately grave reason for permitting the evil effect

Just War Theory: Jus in Bello 3) Proportionality: no overreaction is allowed 4) Benevolent quarantine for POW (Prisoners of War): a fair treatment as recognized legitimate opponents 5) No Means Mala in Se : for example, rapes, genocide or ethnic cleansing… 6) No reprisals : no retaliation violating the jus in bello Internal Jus in Bello : respect of its own citizens’ human rights. For example, No concentration camps for citizens of enemy’s origins (USA and Japanese-Americans during IIWW). Is it possible?

Just War Theory: Jus post Bellum The transition from War to Peace 1) Proportionality and Publicity 2) Rights Vindication 3) Discrimination (between civilians, leaders and soldiers) 4) Punishment (a) (punish the defeated country which violated the rights of war) This suppose that the winning country had not violated the laws of war (is this condition possible? ) 5) Punishment (b) (punish any soldier who violated the laws of war from all the sides of the conflict) (The USA, Russia and China have not signed the Convention for the institution of the International Criminal Court) 6) Compensation (a small problem of precedents: Germany after the First World War) 7) Rehabilitation forced democratization? ? ?