Judges It seems everything after the death of 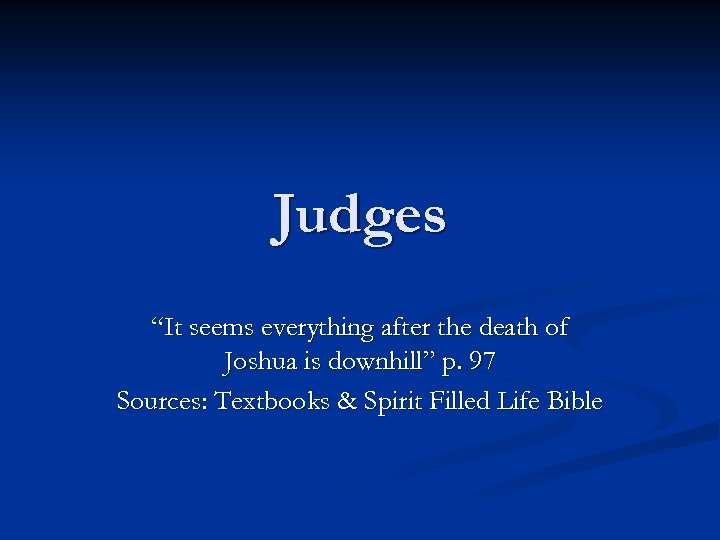 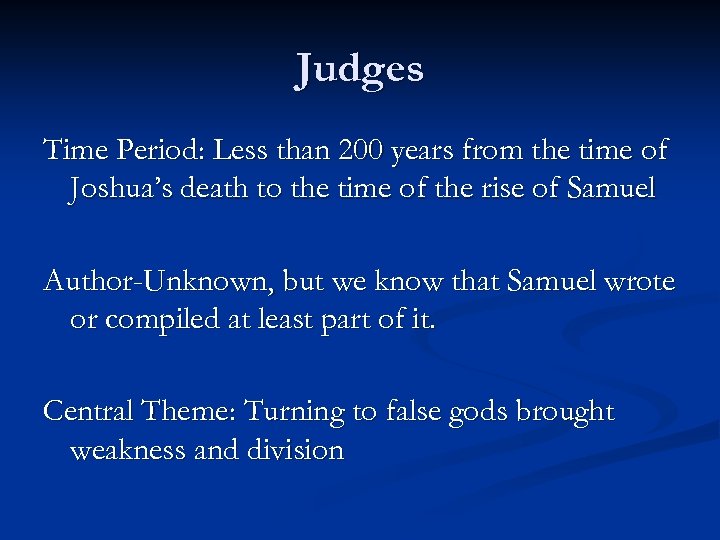 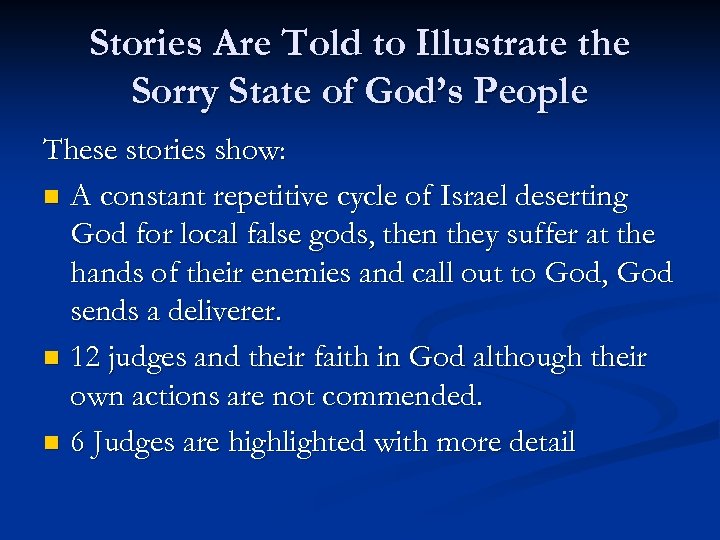 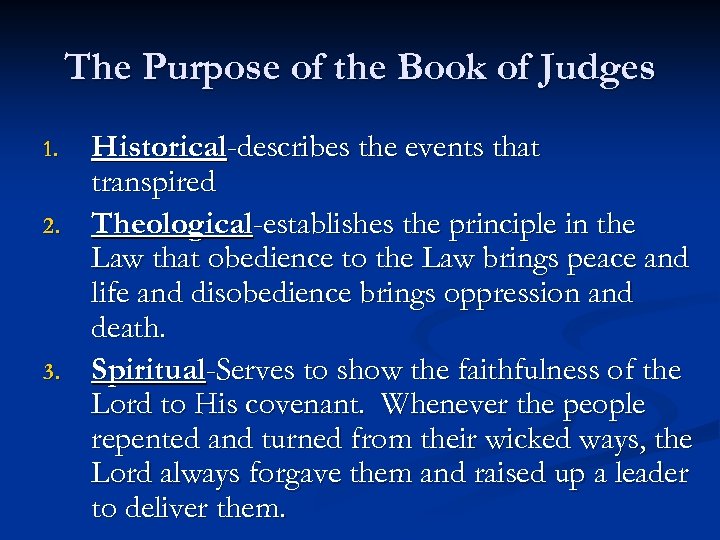 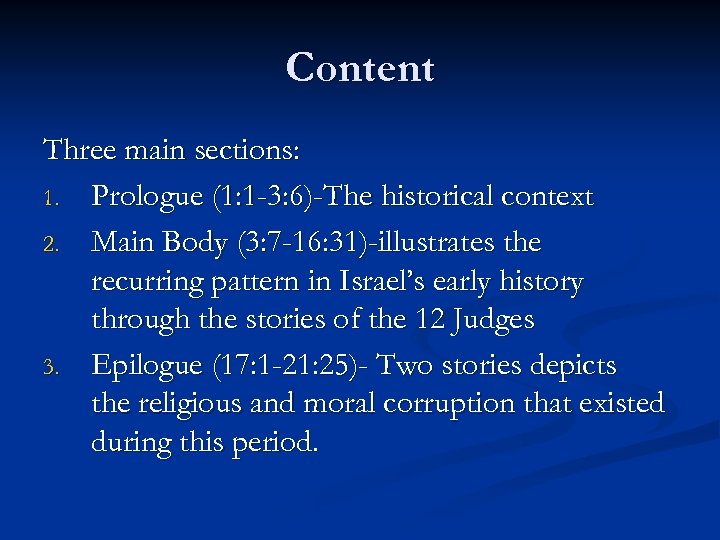 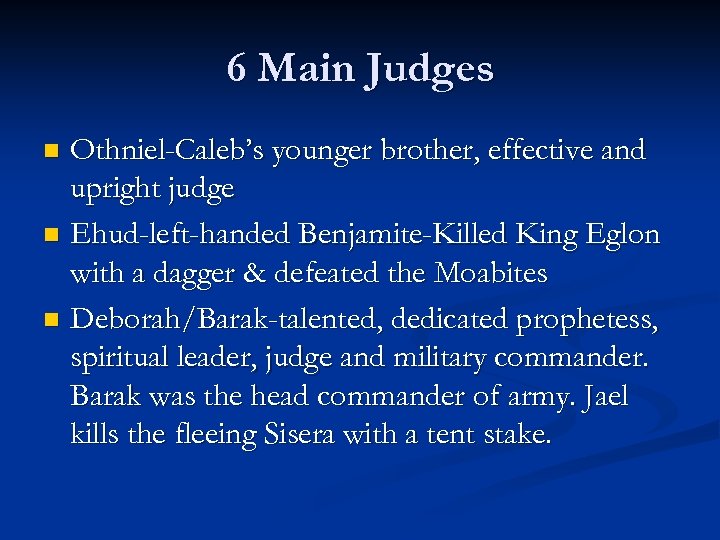 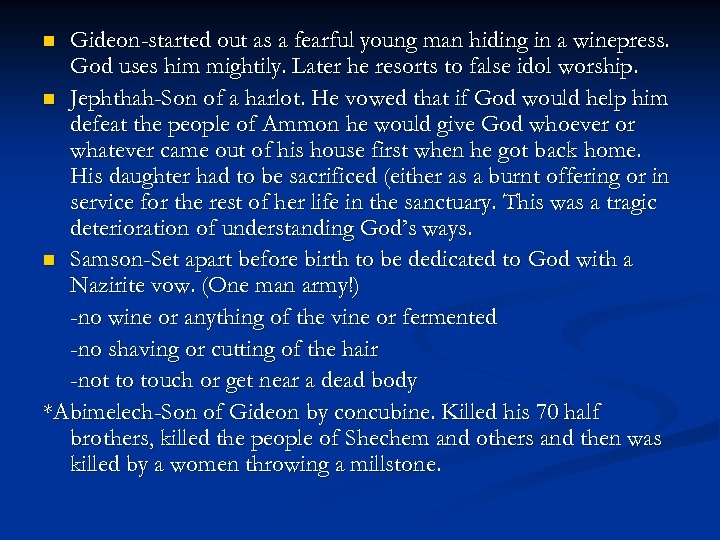 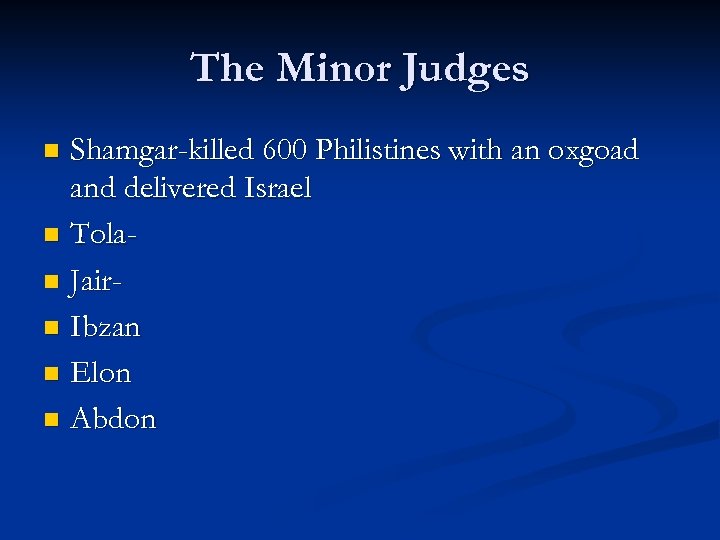 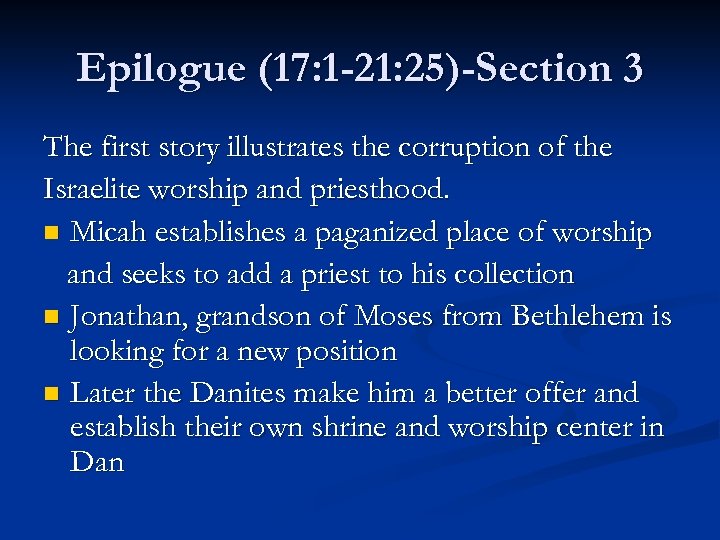 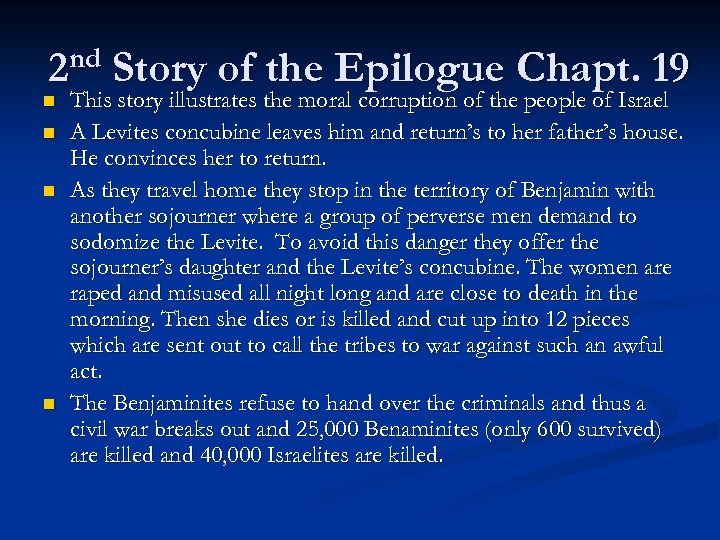 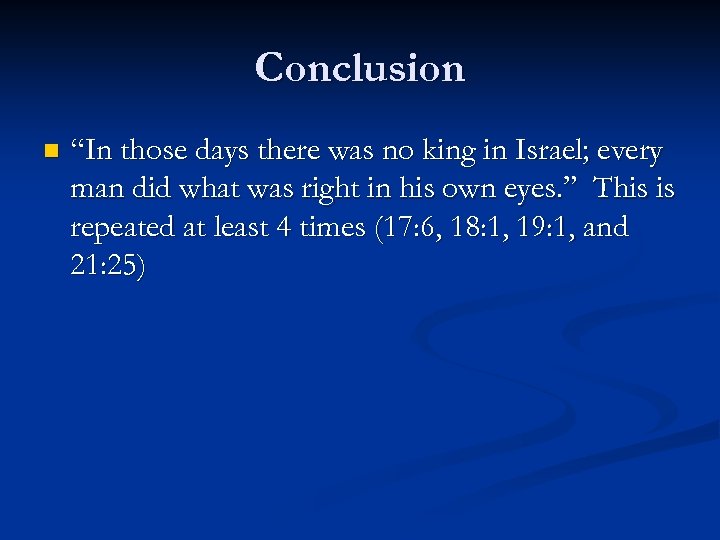 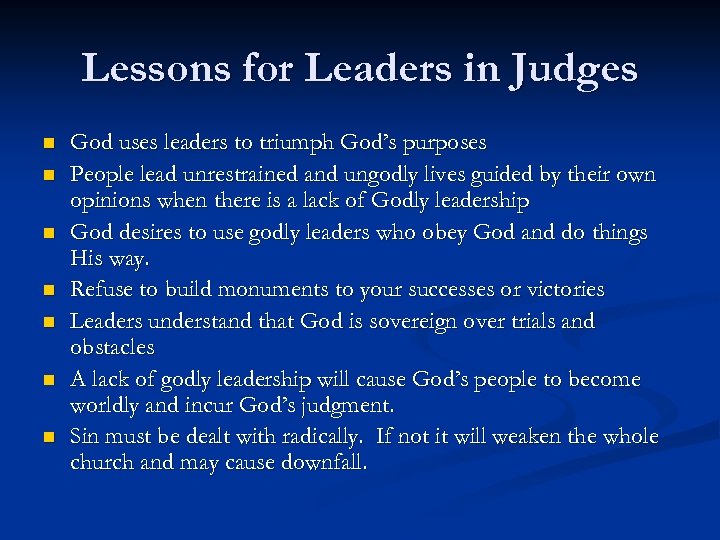 Скачать презентацию Judges It seems everything after the death of

Judges “It seems everything after the death of Joshua is downhill” p. 97 Sources: Textbooks & Spirit Filled Life Bible

Judges Time Period: Less than 200 years from the time of Joshua’s death to the time of the rise of Samuel Author-Unknown, but we know that Samuel wrote or compiled at least part of it. Central Theme: Turning to false gods brought weakness and division

Stories Are Told to Illustrate the Sorry State of God’s People These stories show: n A constant repetitive cycle of Israel deserting God for local false gods, then they suffer at the hands of their enemies and call out to God, God sends a deliverer. n 12 judges and their faith in God although their own actions are not commended. n 6 Judges are highlighted with more detail

The Purpose of the Book of Judges 1. 2. 3. Historical-describes the events that transpired Theological-establishes the principle in the Law that obedience to the Law brings peace and life and disobedience brings oppression and death. Spiritual-Serves to show the faithfulness of the Lord to His covenant. Whenever the people repented and turned from their wicked ways, the Lord always forgave them and raised up a leader to deliver them.

Other things to note n 1. 2. 3. 4. 5. The victorious tribe of Judah is contrasted with the less successful and less achieving northern tribes of Israel. Victory for the house of Joseph Dominance but not expulsion by Manasseh, Ephraim, Zebulon Asher and Naphtali live among the Canaanites Dan repulsed by the Canaanites/Amorites and forced to live in the hill country. This is the third generation from the time of Egypt. Moses, Joshua & Caleb were faithful, the rest were not and died in the dessert, the next generation saw and believed and entered the promised land, but now we have the next generation who are careless, disobedient, faithless, etc.

Gideon-started out as a fearful young man hiding in a winepress. God uses him mightily. Later he resorts to false idol worship. n Jephthah-Son of a harlot. He vowed that if God would help him defeat the people of Ammon he would give God whoever or whatever came out of his house first when he got back home. His daughter had to be sacrificed (either as a burnt offering or in service for the rest of her life in the sanctuary. This was a tragic deterioration of understanding God’s ways. n Samson-Set apart before birth to be dedicated to God with a Nazirite vow. (One man army!) -no wine or anything of the vine or fermented -no shaving or cutting of the hair -not to touch or get near a dead body *Abimelech-Son of Gideon by concubine. Killed his 70 half brothers, killed the people of Shechem and others and then was killed by a women throwing a millstone. n

Epilogue (17: 1 -21: 25)-Section 3 The first story illustrates the corruption of the Israelite worship and priesthood. n Micah establishes a paganized place of worship and seeks to add a priest to his collection n Jonathan, grandson of Moses from Bethlehem is looking for a new position n Later the Danites make him a better offer and establish their own shrine and worship center in Dan

nd 2 n n Story of the Epilogue Chapt. 19 This story illustrates the moral corruption of the people of Israel A Levites concubine leaves him and return’s to her father’s house. He convinces her to return. As they travel home they stop in the territory of Benjamin with another sojourner where a group of perverse men demand to sodomize the Levite. To avoid this danger they offer the sojourner’s daughter and the Levite’s concubine. The women are raped and misused all night long and are close to death in the morning. Then she dies or is killed and cut up into 12 pieces which are sent out to call the tribes to war against such an awful act. The Benjaminites refuse to hand over the criminals and thus a civil war breaks out and 25, 000 Benaminites (only 600 survived) are killed and 40, 000 Israelites are killed.

Lessons for Leaders in Judges n n n n God uses leaders to triumph God’s purposes People lead unrestrained and ungodly lives guided by their own opinions when there is a lack of Godly leadership God desires to use godly leaders who obey God and do things His way. Refuse to build monuments to your successes or victories Leaders understand that God is sovereign over trials and obstacles A lack of godly leadership will cause God’s people to become worldly and incur God’s judgment. Sin must be dealt with radically. If not it will weaken the whole church and may cause downfall.