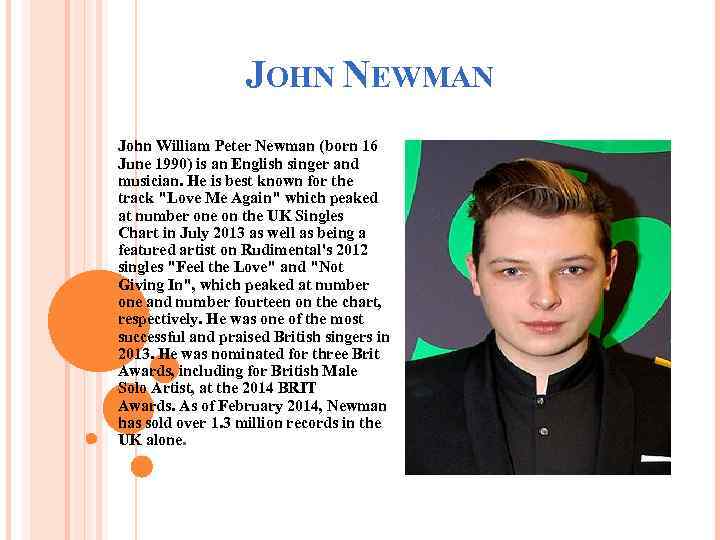 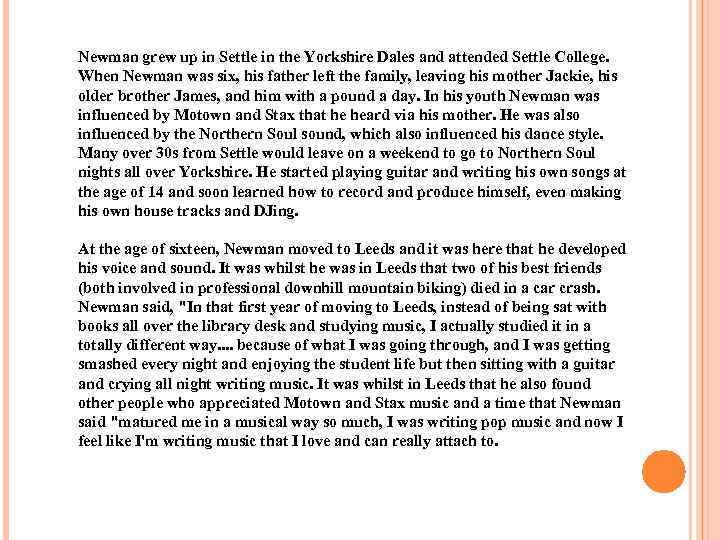 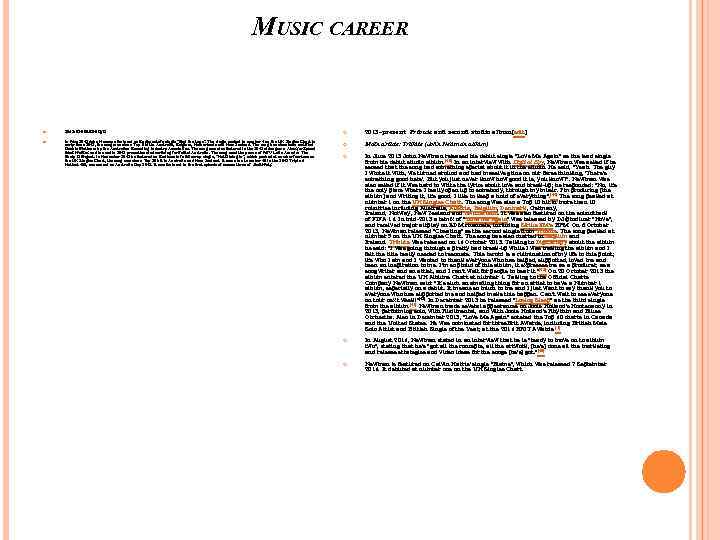 JOHN NEWMAN John William Peter Newman (born 16 June 1990) is an English singer and musician. He is best known for the track "Love Me Again" which peaked at number one on the UK Singles Chart in July 2013 as well as being a featured artist on Rudimental's 2012 singles "Feel the Love" and "Not Giving In", which peaked at number one and number fourteen on the chart, respectively. He was one of the most successful and praised British singers in 2013. He was nominated for three Brit Awards, including for British Male Solo Artist, at the 2014 BRIT Awards. As of February 2014, Newman has sold over 1. 3 million records in the UK alone.

Newman grew up in Settle in the Yorkshire Dales and attended Settle College. When Newman was six, his father left the family, leaving his mother Jackie, his older brother James, and him with a pound a day. In his youth Newman was influenced by Motown and Stax that he heard via his mother. He was also influenced by the Northern Soul sound, which also influenced his dance style. Many over 30 s from Settle would leave on a weekend to go to Northern Soul nights all over Yorkshire. He started playing guitar and writing his own songs at the age of 14 and soon learned how to record and produce himself, even making his own house tracks and DJing. At the age of sixteen, Newman moved to Leeds and it was here that he developed his voice and sound. It was whilst he was in Leeds that two of his best friends (both involved in professional downhill mountain biking) died in a car crash. Newman said, "In that first year of moving to Leeds, instead of being sat with books all over the library desk and studying music, I actually studied it in a totally different way. . because of what I was going through, and I was getting smashed every night and enjoying the student life but then sitting with a guitar and crying all night writing music. It was whilst in Leeds that he also found other people who appreciated Motown and Stax music and a time that Newman said "matured me in a musical way so much, I was writing pop music and now I feel like I'm writing music that I love and can really attach to.

MUSIC CAREER 2012: Breakthrough In May 2012 John Newman featured on Rudimental's single "Feel the Love". The single peaked to number 1 on the UK Singles Chart in early-June 2012, the song was also a Top 5 hit in Australia, Belgium, Netherlands and New Zealand. The song has since been certified Double Platinum by the Australian Recording Industry Association. The song was also featured in the 2012 video game Need for Speed: Most Wanted and is used in 2013 promotional advertising for Foxtel Australia. The song used the promo of MTV Latin America The Pauly D Project. In November 2012 he featured on Rudimental's follow-up single, "Not Giving In", which peaked at number fourteen on the UK Singles Chart, the song was also a Top 20 hit in Australia and New Zealand. It came in at number 16 in the 2012 Triple J Hottest 100, announced on Australia Day 2013. It was featured in the first episode of season three of Teen Wolf. 2013–present: Tribute and second studio album[edit] Main article: Tribute (John Newman album) In June 2013 John Newman released his debut single "Love Me Again" as the lead single from his debut studio album. [10] In an interview with Digital Spy, Newman was asked if he sensed that the song had something special about it in the studio. He said, "Yeah. The guy I wrote it with, we turned around and had massive grins on our faces thinking, 'There's something good here'. But you just never know how good it is, you know? ". Newman was also asked if it was hard to write the lyrics about love and break-up; he responded: "No, it's the only place where I really open up to somebody, through my music. I'm producing [the album] and writing it, it's good. I like to keep a hold of everything". [11] The song peaked at number 1 on the UK Singles Chart. The song was also a Top 10 hit in more than 10 countries including Australia, Austria, Belgium, Denmark, Germany, Ireland, Norway, New Zealand Switzerland. It was also featured on the soundtrack of FIFA 14. In mid-2013 a remix of "Love Me Again" was released by DJ/producer "Kove", and received major airplay on EDM channels, including Sirius XM's BPM. On 6 October 2013, Newman released "Cheating" as the second single from Tribute. The song peaked at number 9 on the UK Singles Chart. The song has also charted in. Belgium and Ireland. Tribute was released on 14 October 2013. Talking to Digital Spy about the album he said: "I was going through a pretty bad break-up while I was making the album and I felt the title really needed to resonate. This record is a culmination of my life to this point; it's who I am and I wanted to thank everyone who has helped, supported, loved me and been an inspiration to me. I'm so proud of this album, it expresses me as a producer, as a songwriter and an artist, and I can't wait for people to hear it. "[12] On 20 October 2013 the album entered the UK Albums Chart at number 1. Talking to the Official Charts Company Newman said: "It’s such an amazing thing for an artist to have a Number 1 album, especially on a debut. It means so much to me and I just want to say thank you to everyone who has supported me and helped make this happen. Can't wait to see everyone on tour next week!"[13] In December 2013 he released "Losing Sleep" as the third single from the album. [14] Newman made several appearances on Jools Holland's Hootenanny in 2013, performing solo, with Rudimental, and with Jools Holland's Rhythm and Blues Orchestra. Also in December 2013, "Love Me Again" entered the Top 40 charts in Canada and the United States. He was nominated for three. Brit Awards, including British Male Solo Artist and British Single of the Year, at the 2014 BRIT Awards. [4] In August 2014, Newman stated in an interview that he is "ready to move on to album two", stating that he's "got all the concepts, all the artwork, [he's] done all the marketing and release strategies and video ideas for the songs [he's] got. "[15] Newman is featured on Calvin Harris' single "Blame", which was released 7 September 2014. It debuted at number one on the UK Singles Chart.