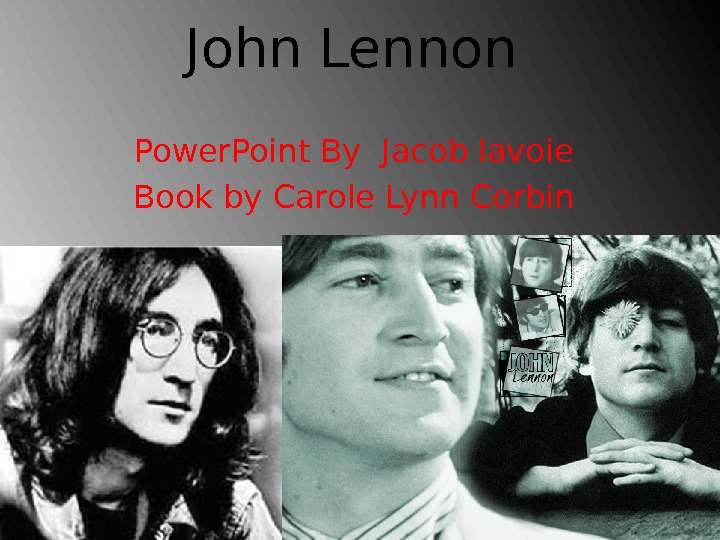 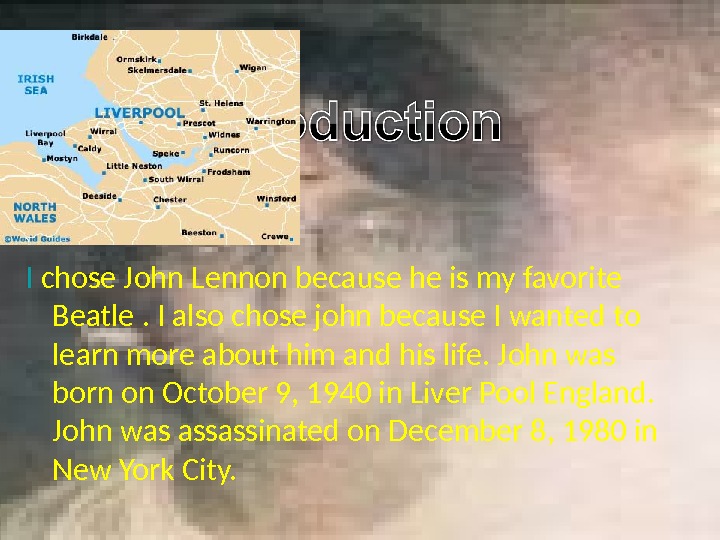 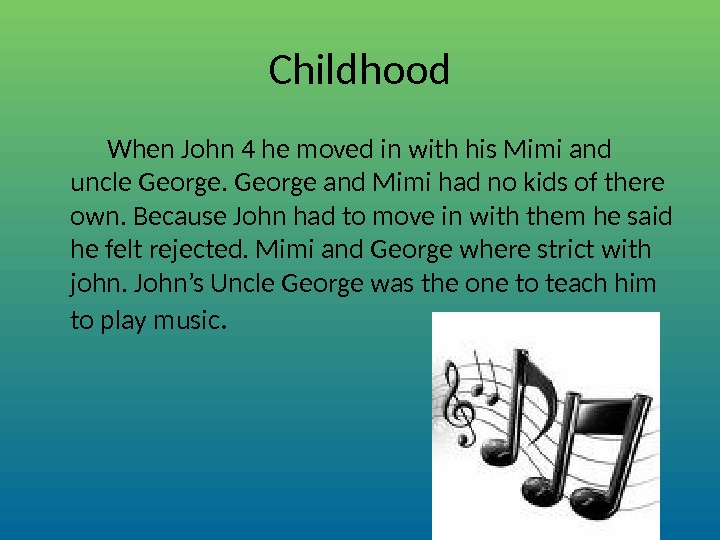 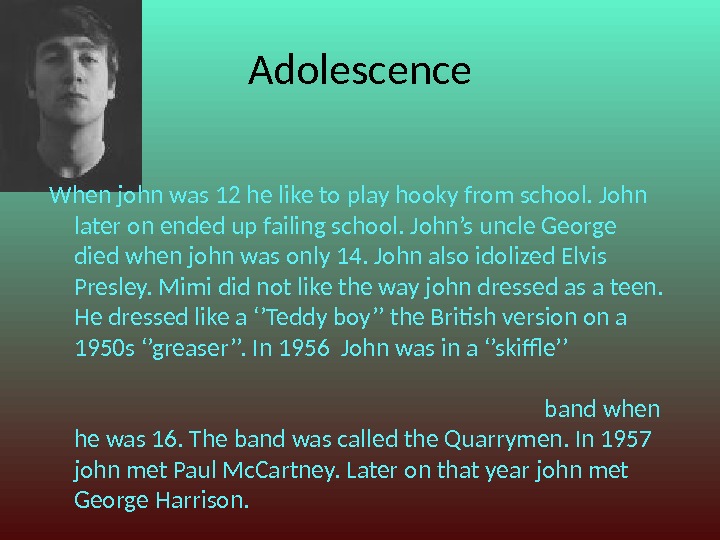 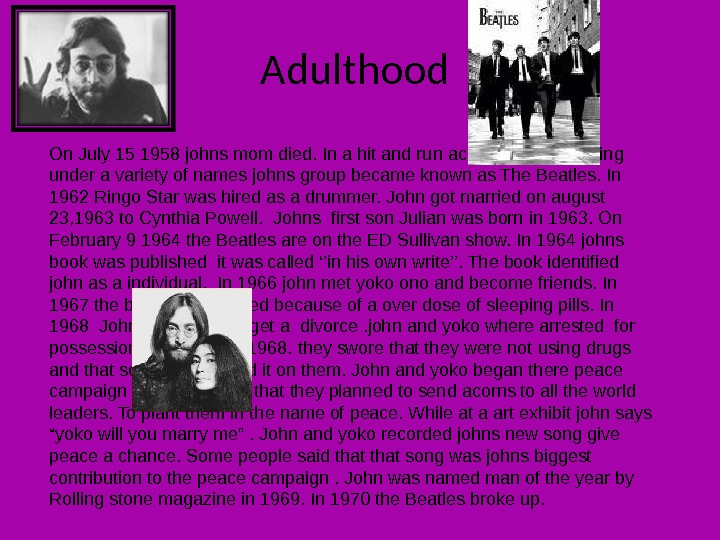 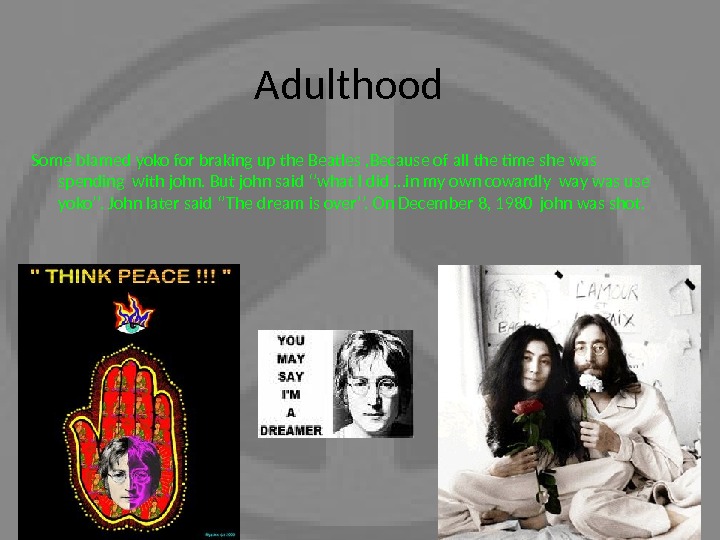 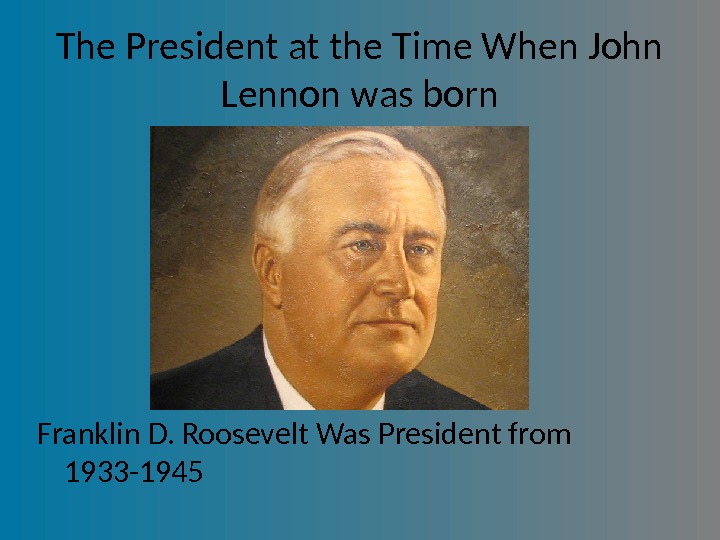 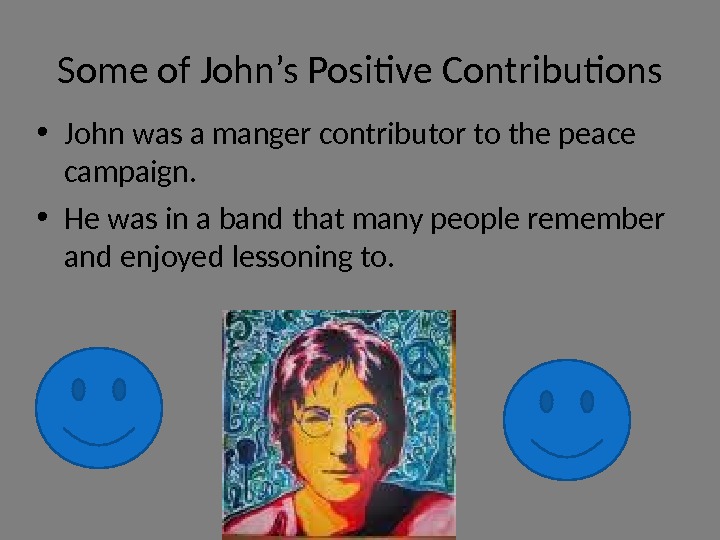 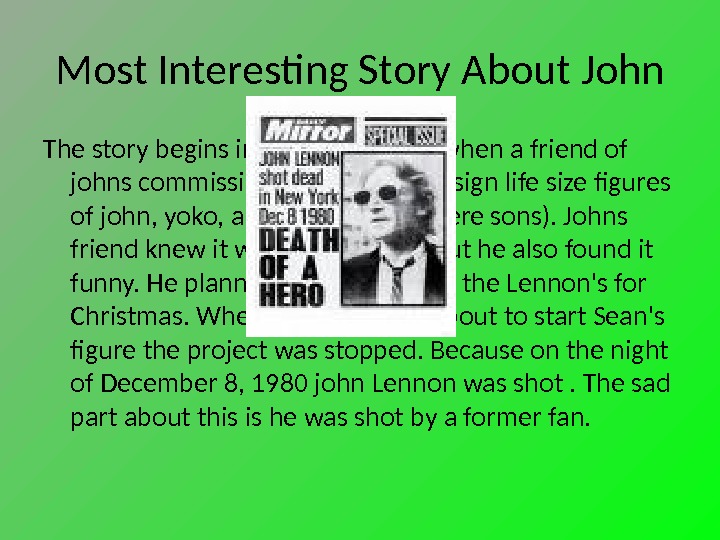 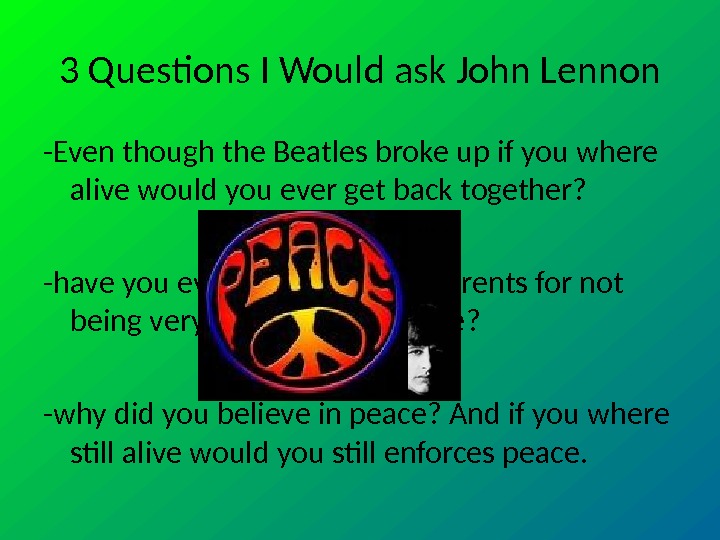 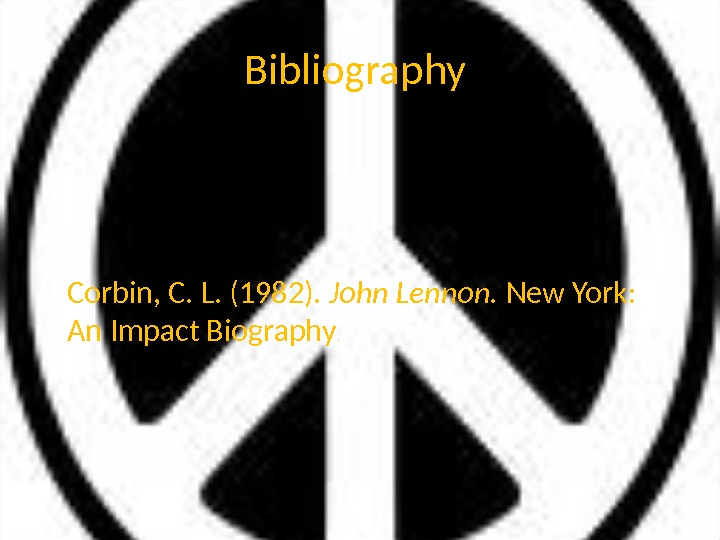 Introduction. I chose John Lennon because he is my favorite Beatle. I also chose john because I wanted to learn more about him and his life. John was born on October 9, 1940 in Liver Pool England. John was assassinated on December 8, 1980 in New York City.

Childhood When John 4 he moved in with his Mimi and uncle George and Mimi had no kids of there own. Because John had to move in with them he said he felt rejected. Mimi and George where strict with john. John’s Uncle George was the one to teach him to play music.

Adolescence When john was 12 he like to play hooky from school. John later on ended up failing school. John’s uncle George died when john was only 14. John also idolized Elvis Presley. Mimi did not like the way john dressed as a teen. He dressed like a ‘’Teddy boy’’ the British version on a 1950 s ‘’greaser’’. In 1956 John was in a ‘’skiffle’’ band when he was 16. The band was called the Quarrymen. In 1957 john met Paul Mc. Cartney. Later on that year john met George Harrison.

Adulthood On July 15 1958 johns mom died. In a hit and run accident. After playing under a variety of names johns group became known as The Beatles. In 1962 Ringo Star was hired as a drummer. John got married on august 23, 1963 to Cynthia Powell. Johns first son Julian was born in 1963. On February 9 1964 the Beatles are on the ED Sullivan show. In 1964 johns book was published it was called ‘’in his own write’’. The book identified john as a individual. In 1966 john met yoko ono and become friends. In 1967 the band manger died because of a over dose of sleeping pills. In 1968 John and Cynthia get a divorce. john and yoko where arrested for possession of marijuana 1968. they swore that they were not using drugs and that someone planted it on them. John and yoko began there peace campaign by announcing that they planned to send acorns to all the world leaders. To plant them in the name of peace. While at a art exhibit john says “yoko will you marry me”. John and yoko recorded johns new song give peace a chance. Some people said that song was johns biggest contribution to the peace campaign. John was named man of the year by Rolling stone magazine in 1969. In 1970 the Beatles broke up.

Adulthood Some blamed yoko for braking up the Beatles , Because of all the time she was spending with john. But john said ‘’what I did …in my own cowardly was use yoko’’. John later said ‘’The dream is over’’. On December 8, 1980 john was shot.

The President at the Time When John Lennon was born Franklin D. Roosevelt Was President from 1933 —

Some of John’s Positive Contributions • John was a manger contributor to the peace campaign. • He was in a band that many people remember and enjoyed lessoning to.

Most Interesting Story About John The story begins in the fall of 1980 when a friend of johns commissioned a artist to design life size figures of john, yoko, and Sean(one of there sons). Johns friend knew it was a little weird but he also found it funny. He planned to give them to the Lennon’s for Christmas. When the artist was about to start Sean’s figure the project was stopped. Because on the night of December 8, 1980 john Lennon was shot. The sad part about this is he was shot by a former fan.

3 Questions I Would ask John Lennon -Even though the Beatles broke up if you where alive would you ever get back together? -have you ever resented your parents for not being very involved in your life? -why did you believe in peace? And if you where still alive would you still enforces peace.