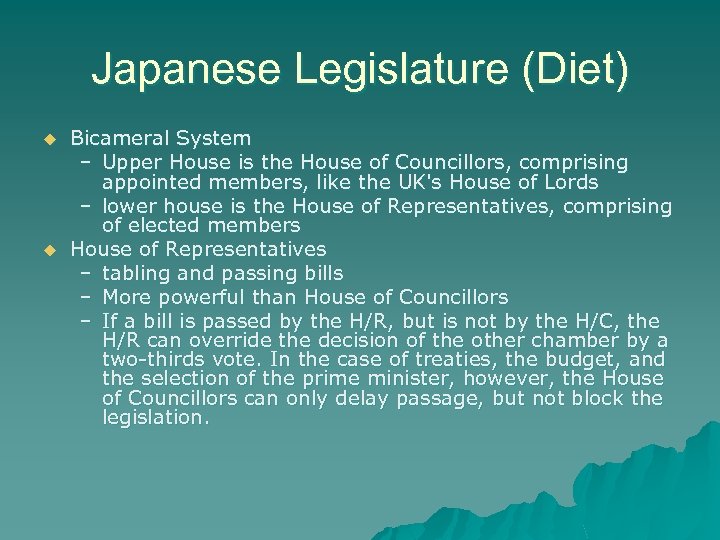 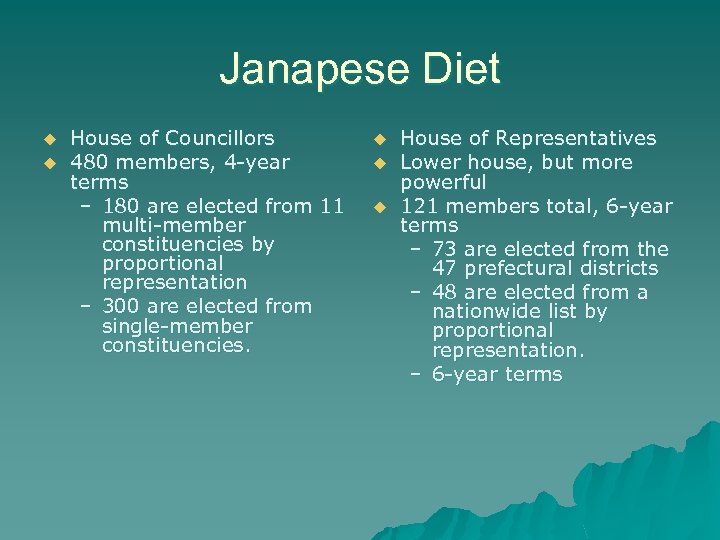 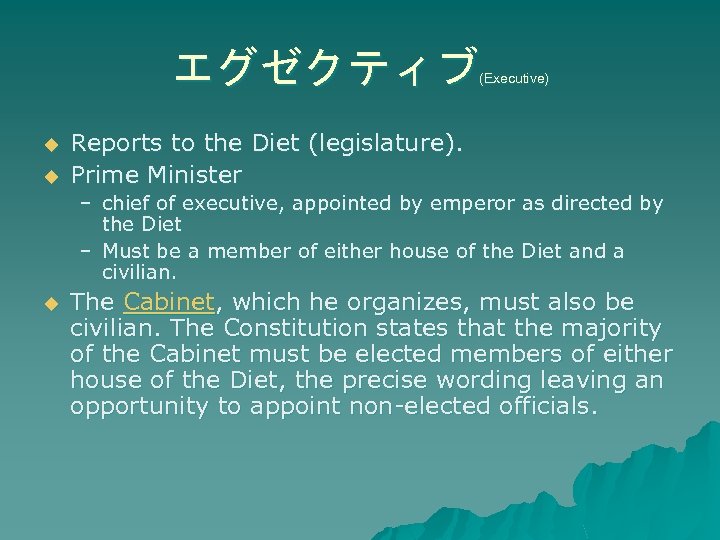 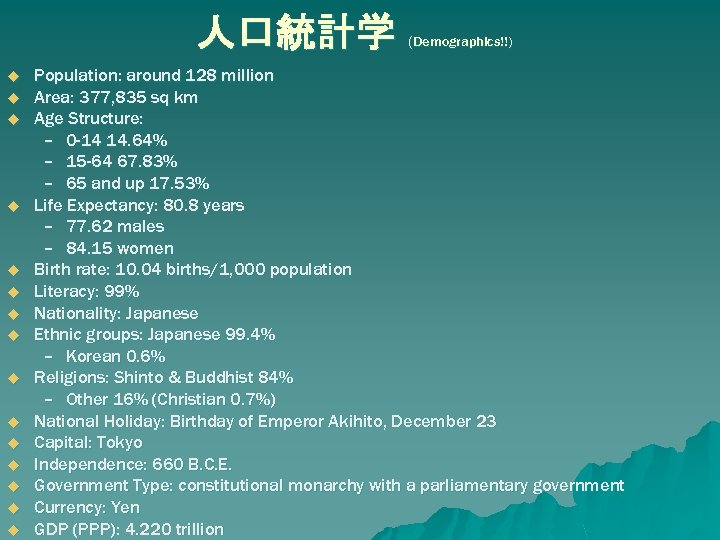 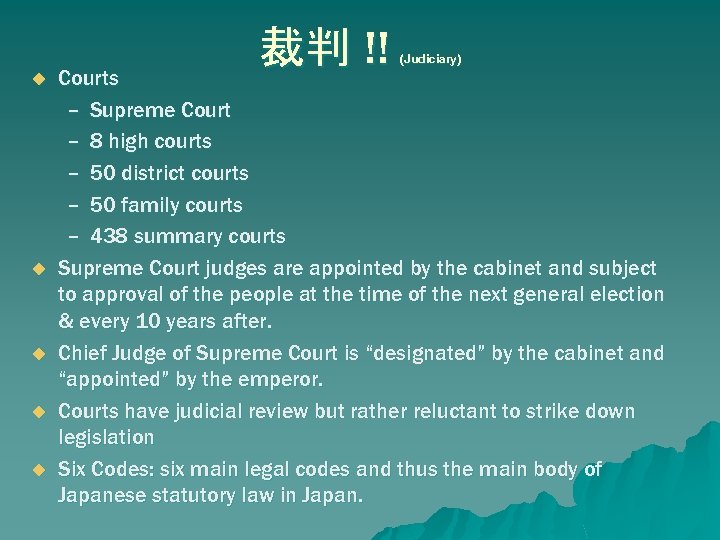 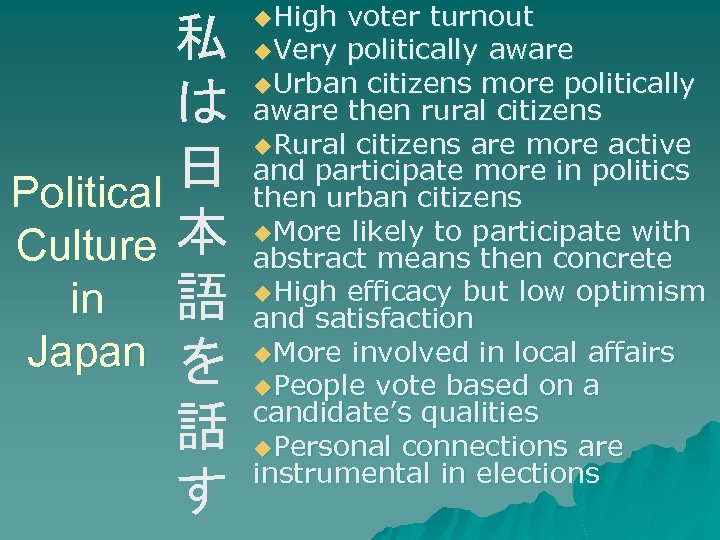 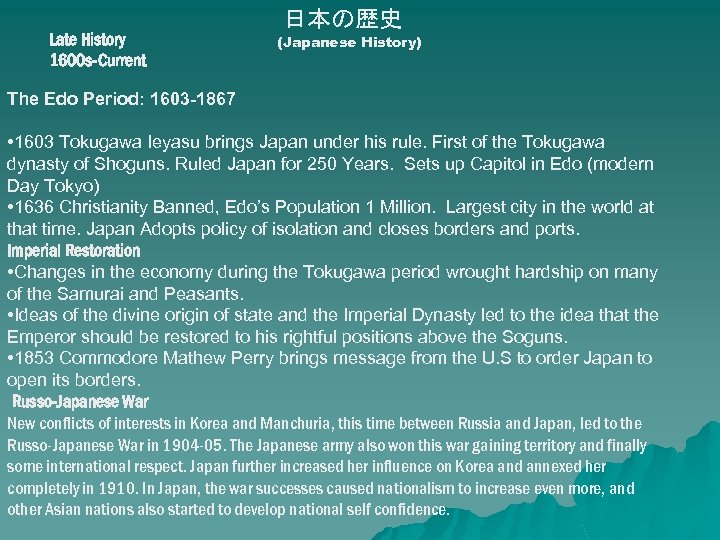 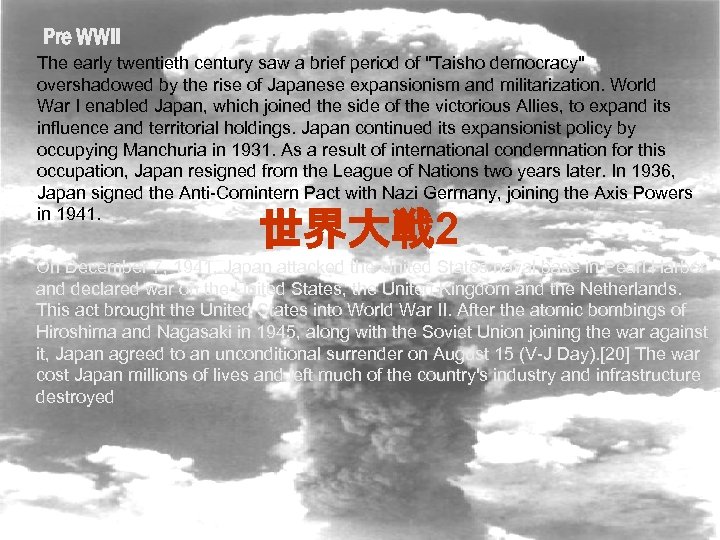 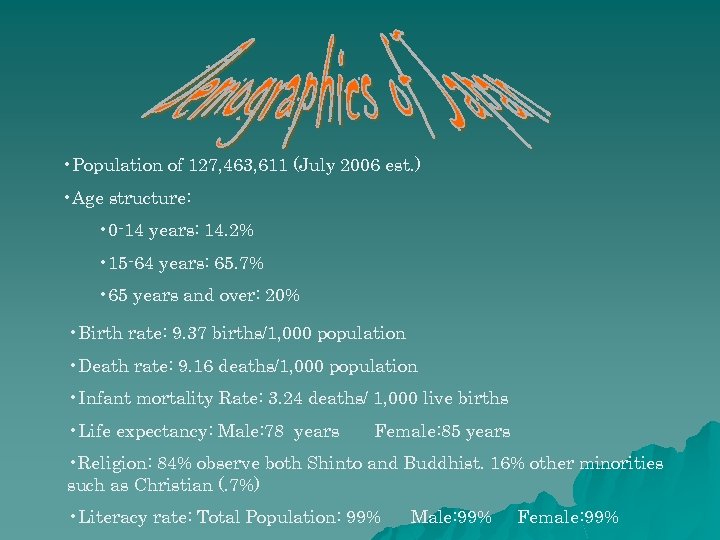 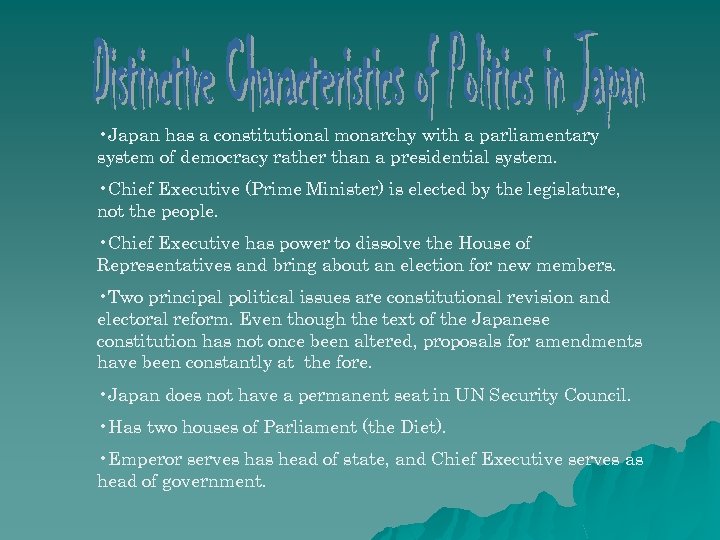 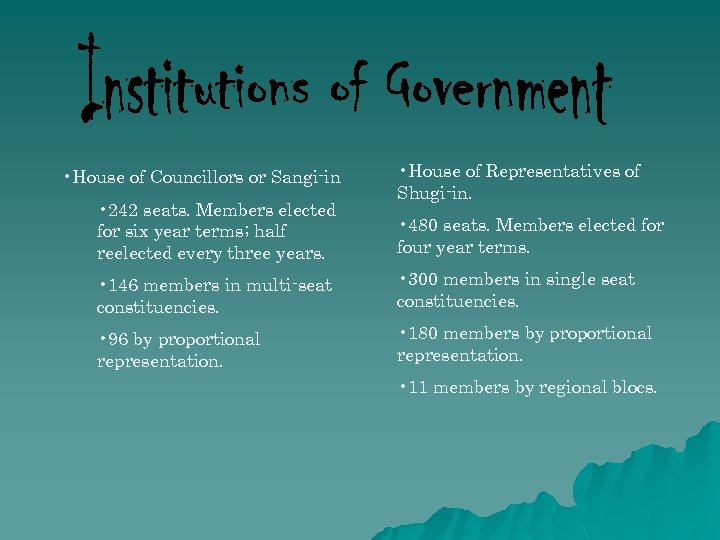 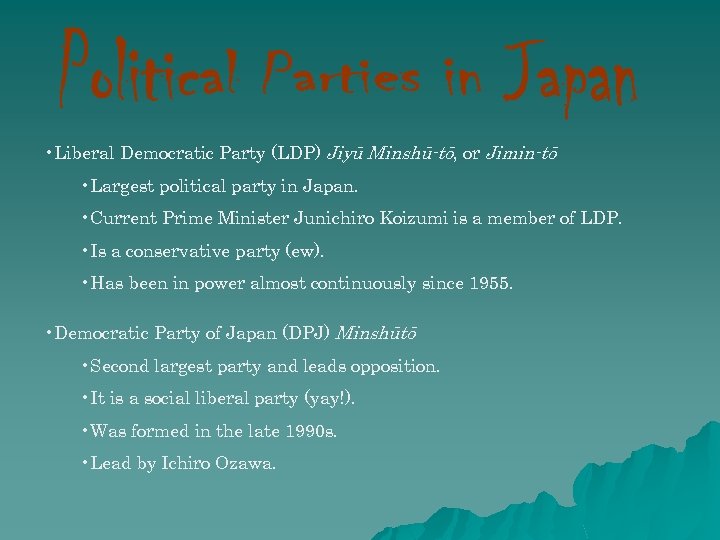 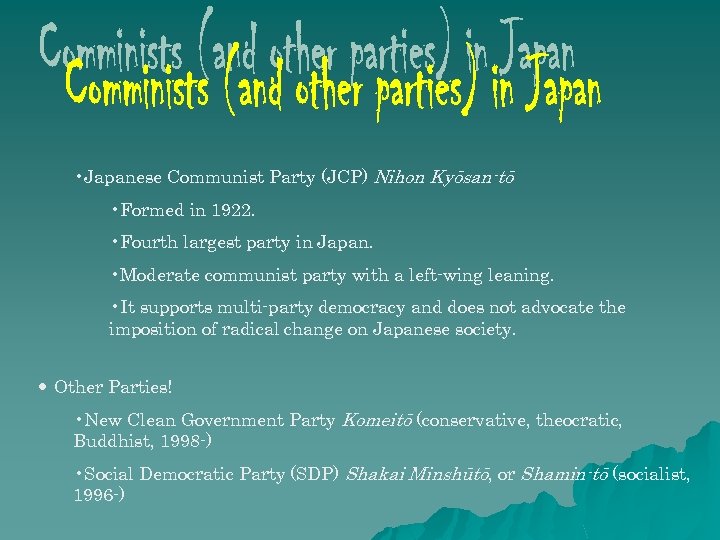 エグゼクティブ (Executive) u u Reports to the Diet (legislature). Prime Minister – chief of executive, appointed by emperor as directed by the Diet – Must be a member of either house of the Diet and a civilian. u The Cabinet, which he organizes, must also be civilian. The Constitution states that the majority of the Cabinet must be elected members of either house of the Diet, the precise wording leaving an opportunity to appoint non-elected officials.

u u u 裁判 !! (Judiciary) Courts – Supreme Court – 8 high courts – 50 district courts – 50 family courts – 438 summary courts Supreme Court judges are appointed by the cabinet and subject to approval of the people at the time of the next general election & every 10 years after. Chief Judge of Supreme Court is “designated” by the cabinet and “appointed” by the emperor. Courts have judicial review but rather reluctant to strike down legislation Six Codes: six main legal codes and thus the main body of Japanese statutory law in Japan.

私 は 日 Political Culture 本 in 語 Japan を 話 す u. High voter turnout u. Very politically aware u. Urban citizens more politically aware then rural citizens u. Rural citizens are more active and participate more in politics then urban citizens u. More likely to participate with abstract means then concrete u. High efficacy but low optimism and satisfaction u. More involved in local affairs u. People vote based on a candidate’s qualities u. Personal connections are instrumental in elections

Late History 1600 s-Current 日本の歴史 (Japanese History) The Edo Period: 1603 -1867 • 1603 Tokugawa Ieyasu brings Japan under his rule. First of the Tokugawa dynasty of Shoguns. Ruled Japan for 250 Years. Sets up Capitol in Edo (modern Day Tokyo) • 1636 Christianity Banned, Edo’s Population 1 Million. Largest city in the world at that time. Japan Adopts policy of isolation and closes borders and ports. Imperial Restoration • Changes in the economy during the Tokugawa period wrought hardship on many of the Samurai and Peasants. • Ideas of the divine origin of state and the Imperial Dynasty led to the idea that the Emperor should be restored to his rightful positions above the Soguns. • 1853 Commodore Mathew Perry brings message from the U. S to order Japan to open its borders. Russo-Japanese War New conflicts of interests in Korea and Manchuria, this time between Russia and Japan, led to the Russo-Japanese War in 1904 -05. The Japanese army also won this war gaining territory and finally some international respect. Japan further increased her influence on Korea and annexed her completely in 1910. In Japan, the war successes caused nationalism to increase even more, and other Asian nations also started to develop national self confidence.

Pre WWII The early twentieth century saw a brief period of "Taisho democracy" overshadowed by the rise of Japanese expansionism and militarization. World War I enabled Japan, which joined the side of the victorious Allies, to expand its influence and territorial holdings. Japan continued its expansionist policy by occupying Manchuria in 1931. As a result of international condemnation for this occupation, Japan resigned from the League of Nations two years later. In 1936, Japan signed the Anti-Comintern Pact with Nazi Germany, joining the Axis Powers in 1941. 世界大戦 2 On December 7, 1941, Japan attacked the United States naval base in Pearl Harbor and declared war on the United States, the United Kingdom and the Netherlands. This act brought the United States into World War II. After the atomic bombings of Hiroshima and Nagasaki in 1945, along with the Soviet Union joining the war against it, Japan agreed to an unconditional surrender on August 15 (V-J Day). [20] The war cost Japan millions of lives and left much of the country's industry and infrastructure destroyed

• Japan has a constitutional monarchy with a parliamentary system of democracy rather than a presidential system. • Chief Executive (Prime Minister) is elected by the legislature, not the people. • Chief Executive has power to dissolve the House of Representatives and bring about an election for new members. • Two principal political issues are constitutional revision and electoral reform. Even though the text of the Japanese constitution has not once been altered, proposals for amendments have been constantly at the fore. • Japan does not have a permanent seat in UN Security Council. • Has two houses of Parliament (the Diet). • Emperor serves has head of state, and Chief Executive serves as head of government.

• Liberal Democratic Party (LDP) Jiyū Minshū-tō, or Jimin-tō • Largest political party in Japan. • Current Prime Minister Junichiro Koizumi is a member of LDP. • Is a conservative party (ew). • Has been in power almost continuously since 1955. • Democratic Party of Japan (DPJ) Minshūtō • Second largest party and leads opposition. • It is a social liberal party (yay!). • Was formed in the late 1990 s. • Lead by Ichiro Ozawa.

Human Body Systems You Can’t Have One Without