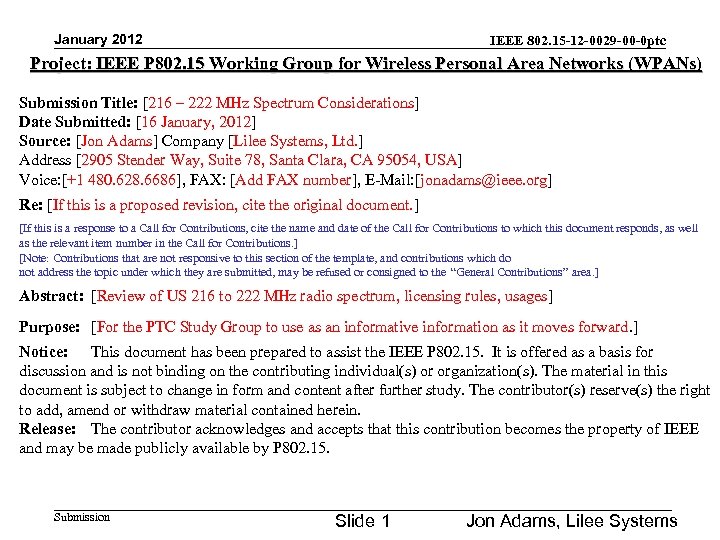 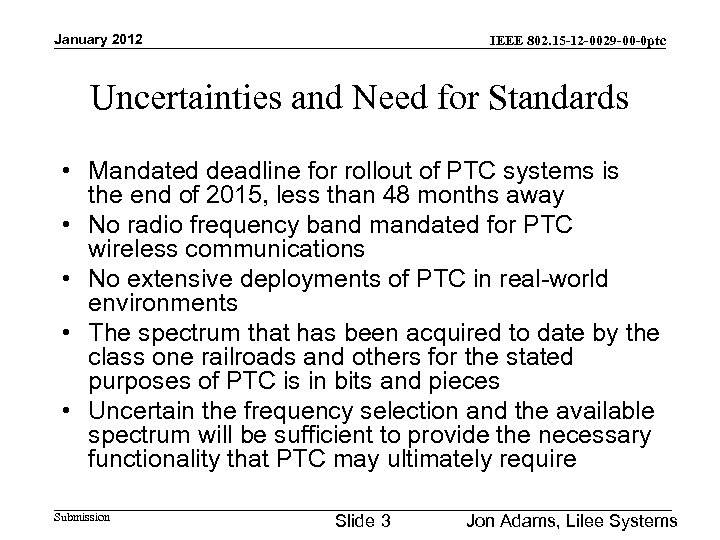 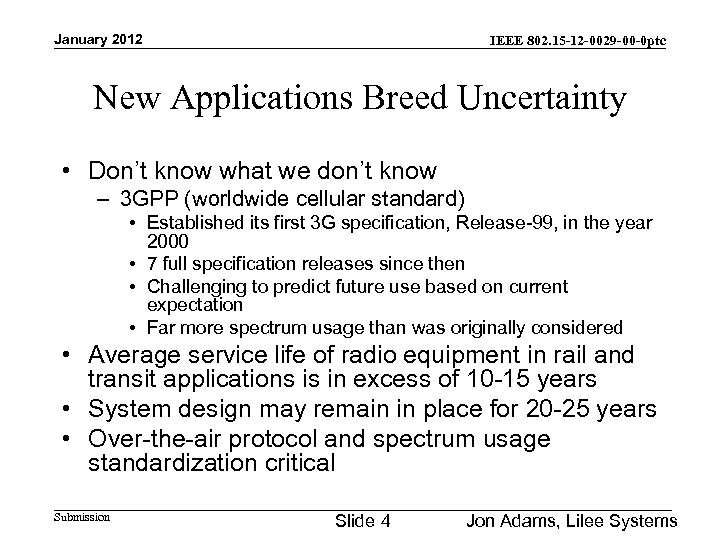 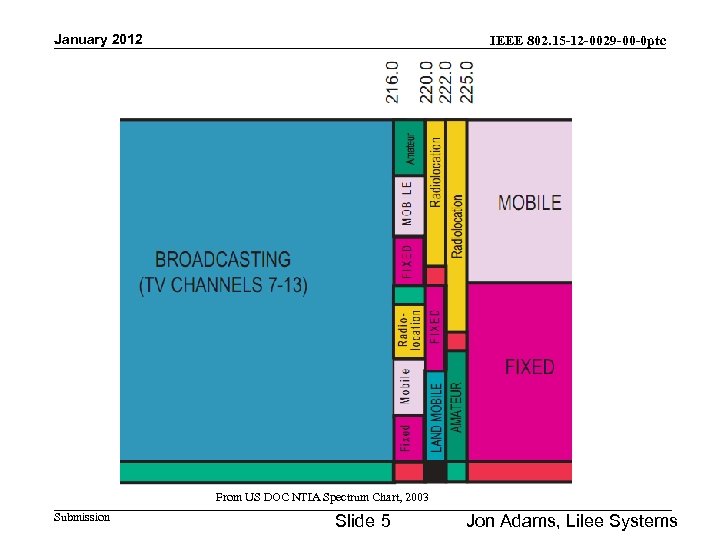 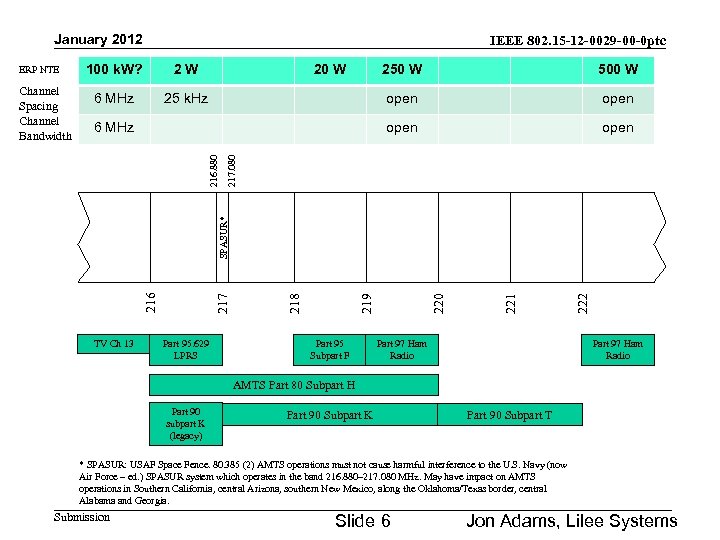 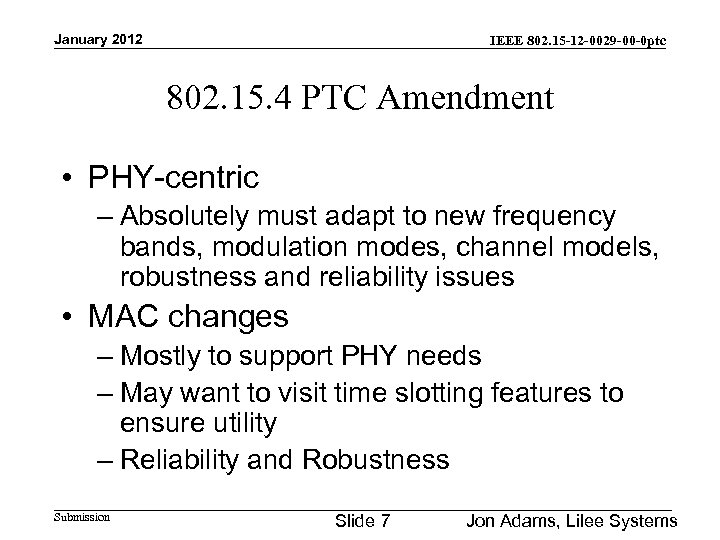 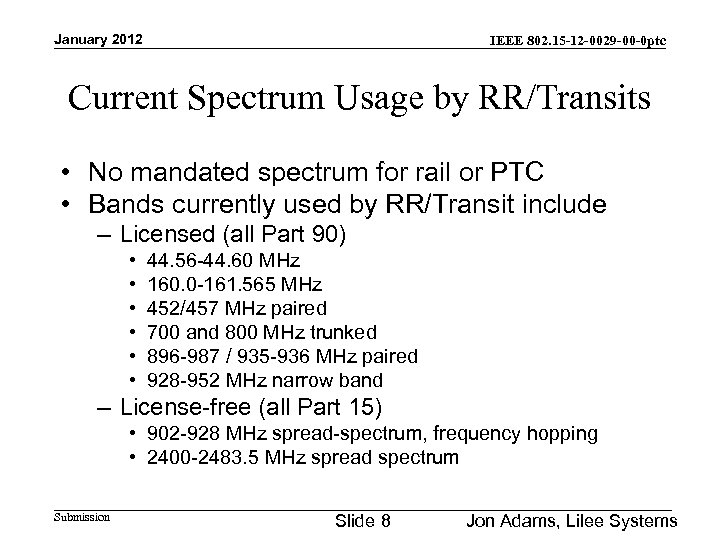 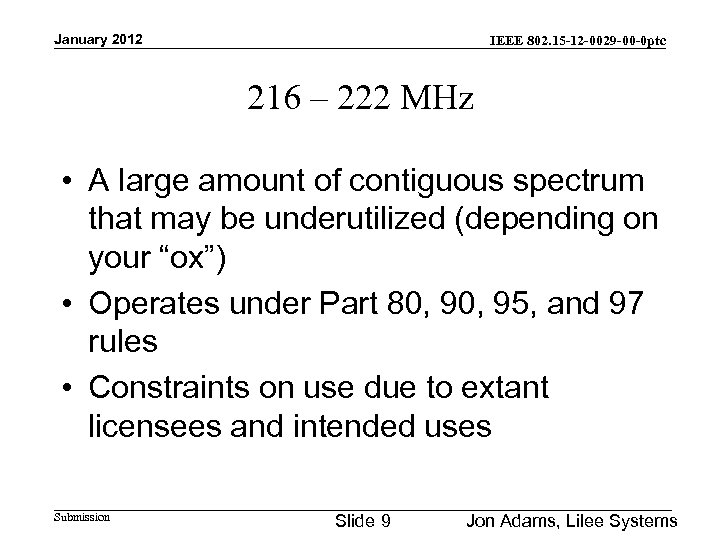 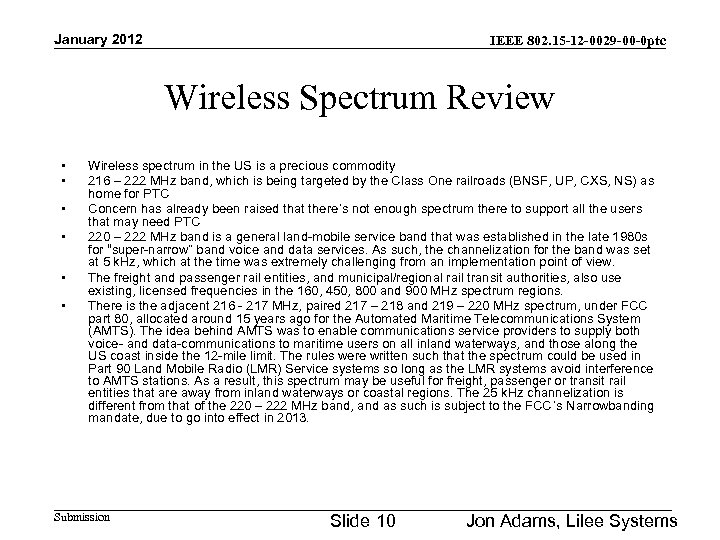 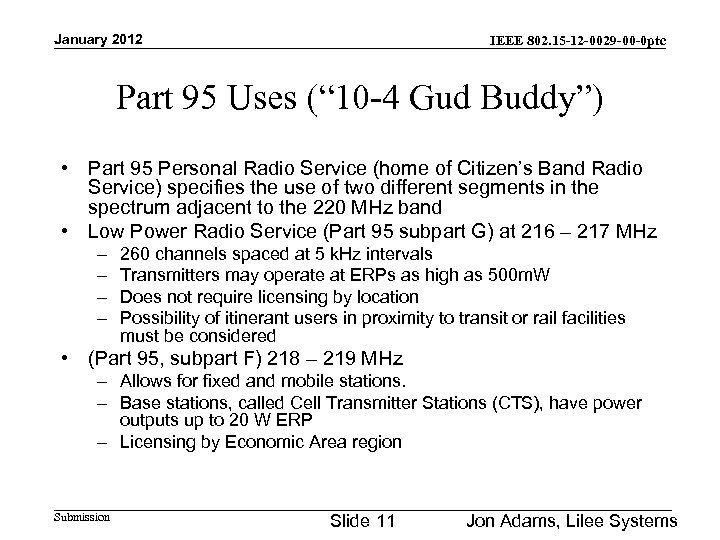 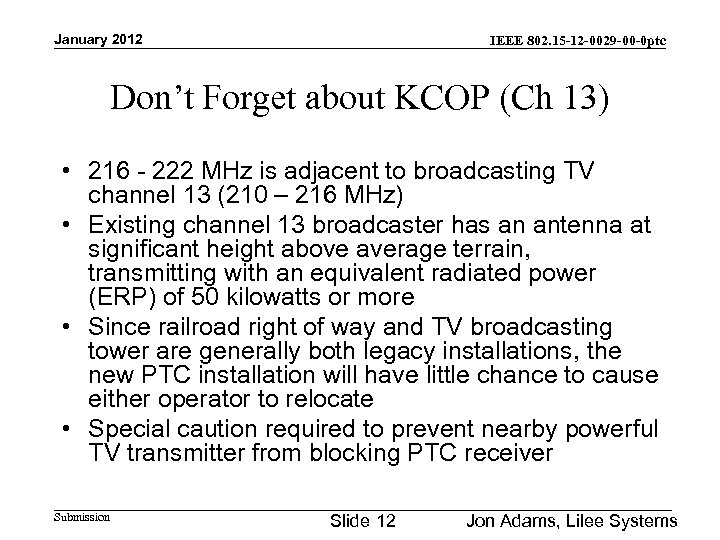 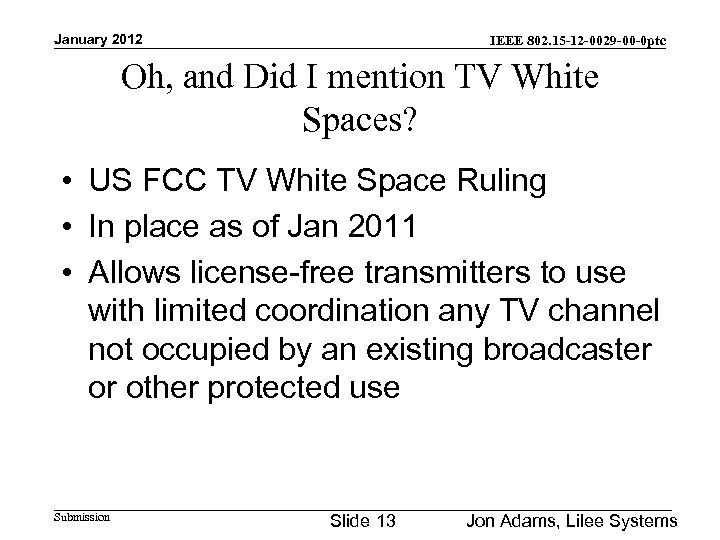 January 2012 IEEE 802. 15 -12 -0029 -00 -0 ptc Project: IEEE P 802. 15 Working Group for Wireless Personal Area Networks (WPANs) Submission Title: [216 – 222 MHz Spectrum Considerations] Date Submitted: [16 January, 2012] Source: [Jon Adams] Company [Lilee Systems, Ltd. ] Address [2905 Stender Way, Suite 78, Santa Clara, CA 95054, USA] Voice: [+1 480. 628. 6686], FAX: [Add FAX number], E-Mail: [[email protected] org] Re: [If this is a proposed revision, cite the original document. ] [If this is a response to a Call for Contributions, cite the name and date of the Call for Contributions to which this document responds, as well as the relevant item number in the Call for Contributions. ] [Note: Contributions that are not responsive to this section of the template, and contributions which do not address the topic under which they are submitted, may be refused or consigned to the “General Contributions” area. ] Abstract: [Review of US 216 to 222 MHz radio spectrum, licensing rules, usages] Purpose: [For the PTC Study Group to use as an informative information as it moves forward. ] Notice: This document has been prepared to assist the IEEE P 802. 15. It is offered as a basis for discussion and is not binding on the contributing individual(s) or organization(s). The material in this document is subject to change in form and content after further study. The contributor(s) reserve(s) the right to add, amend or withdraw material contained herein. Release: The contributor acknowledges and accepts that this contribution becomes the property of IEEE and may be made publicly available by P 802. 15. Submission Slide 1 Jon Adams, Lilee Systems

January 2012 IEEE 802. 15 -12 -0029 -00 -0 ptc Uncertainties and Need for Standards • Mandated deadline for rollout of PTC systems is the end of 2015, less than 48 months away • No radio frequency band mandated for PTC wireless communications • No extensive deployments of PTC in real-world environments • The spectrum that has been acquired to date by the class one railroads and others for the stated purposes of PTC is in bits and pieces • Uncertain the frequency selection and the available spectrum will be sufficient to provide the necessary functionality that PTC may ultimately require Submission Slide 3 Jon Adams, Lilee Systems

January 2012 IEEE 802. 15 -12 -0029 -00 -0 ptc Wireless Spectrum Review • • • Wireless spectrum in the US is a precious commodity 216 – 222 MHz band, which is being targeted by the Class One railroads (BNSF, UP, CXS, NS) as home for PTC Concern has already been raised that there’s not enough spectrum there to support all the users that may need PTC 220 – 222 MHz band is a general land-mobile service band that was established in the late 1980 s for “super-narrow” band voice and data services. As such, the channelization for the band was set at 5 k. Hz, which at the time was extremely challenging from an implementation point of view. The freight and passenger rail entities, and municipal/regional rail transit authorities, also use existing, licensed frequencies in the 160, 450, 800 and 900 MHz spectrum regions. There is the adjacent 216 - 217 MHz, paired 217 – 218 and 219 – 220 MHz spectrum, under FCC part 80, allocated around 15 years ago for the Automated Maritime Telecommunications System (AMTS). The idea behind AMTS was to enable communications service providers to supply both voice- and data-communications to maritime users on all inland waterways, and those along the US coast inside the 12 -mile limit. The rules were written such that the spectrum could be used in Part 90 Land Mobile Radio (LMR) Service systems so long as the LMR systems avoid interference to AMTS stations. As a result, this spectrum may be useful for freight, passenger or transit rail entities that are away from inland waterways or coastal regions. The 25 k. Hz channelization is different from that of the 220 – 222 MHz band, and as such is subject to the FCC ’s Narrowbanding mandate, due to go into effect in 2013. Submission Slide 10 Jon Adams, Lilee Systems

January 2012 IEEE 802. 15 -12 -0029 -00 -0 ptc Don’t Forget about KCOP (Ch 13) • 216 - 222 MHz is adjacent to broadcasting TV channel 13 (210 – 216 MHz) • Existing channel 13 broadcaster has an antenna at significant height above average terrain, transmitting with an equivalent radiated power (ERP) of 50 kilowatts or more • Since railroad right of way and TV broadcasting tower are generally both legacy installations, the new PTC installation will have little chance to cause either operator to relocate • Special caution required to prevent nearby powerful TV transmitter from blocking PTC receiver Submission Slide 12 Jon Adams, Lilee Systems

January 2012 IEEE 802. 15 -12 -0029 -00 -0 ptc Oh, and Did I mention TV White Spaces? • US FCC TV White Space Ruling • In place as of Jan 2011 • Allows license-free transmitters to use with limited coordination any TV channel not occupied by an existing broadcaster or other protected use Submission Slide 13 Jon Adams, Lilee Systems