It is not the strongest of the species 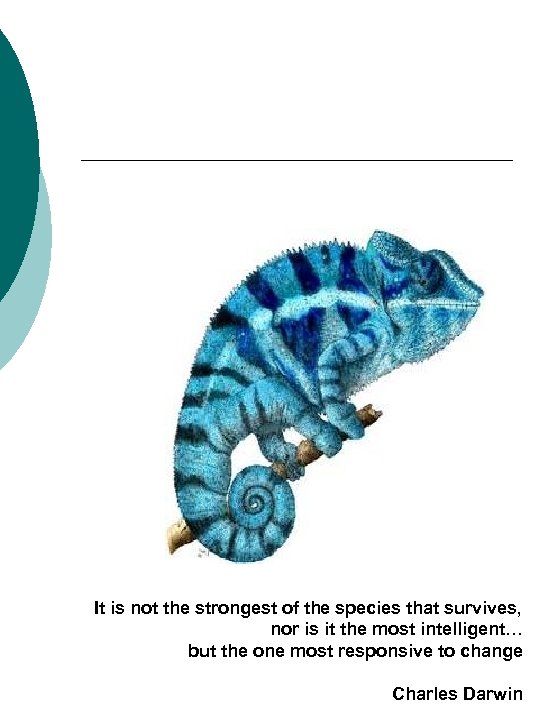 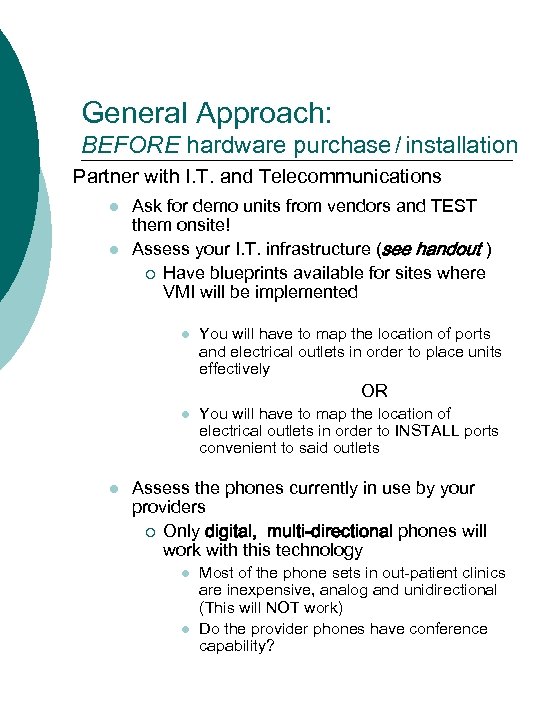 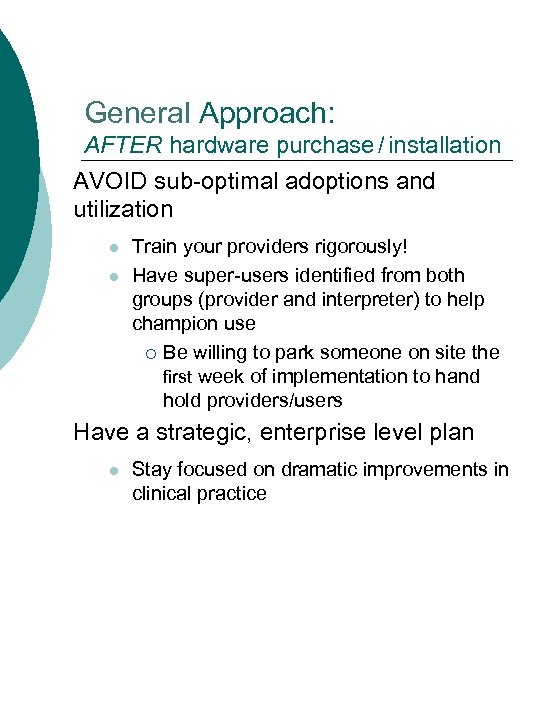 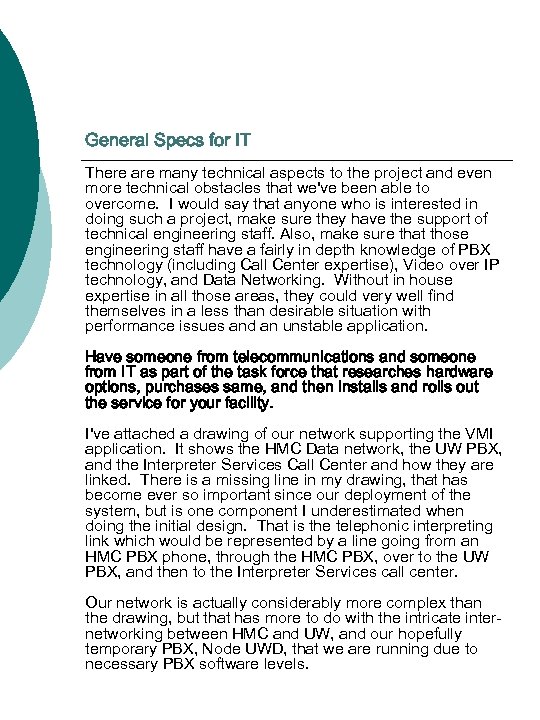 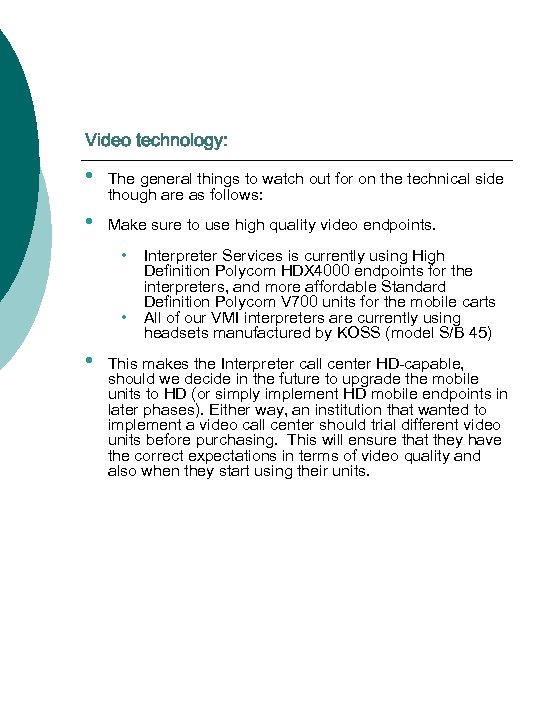 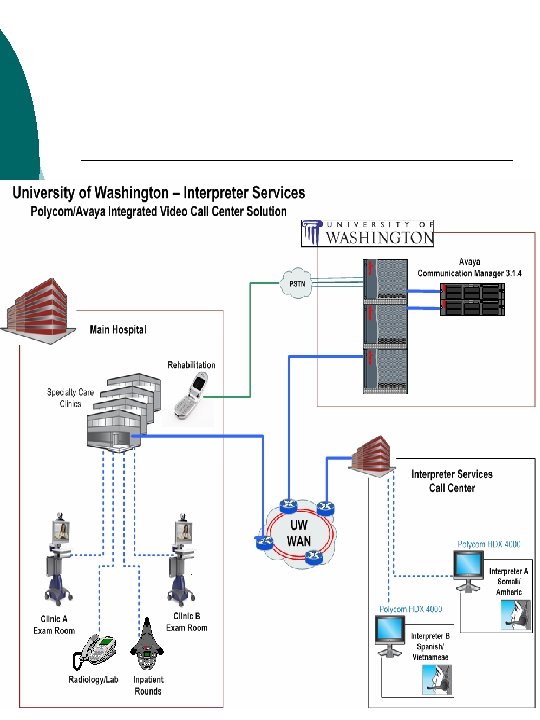 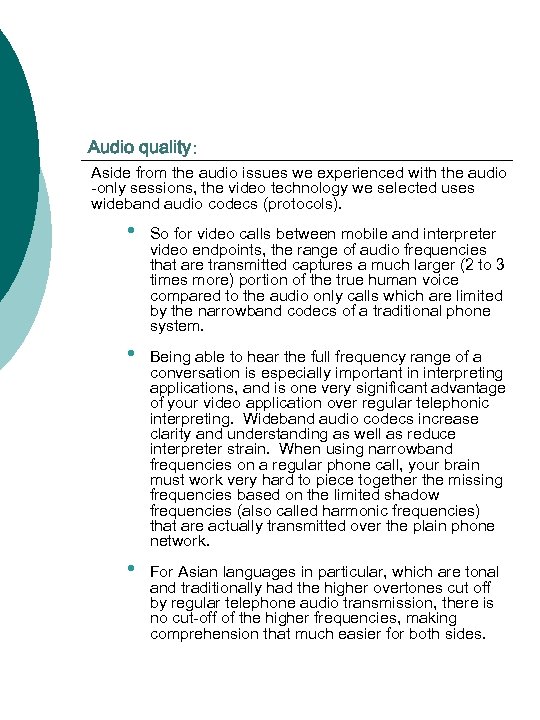 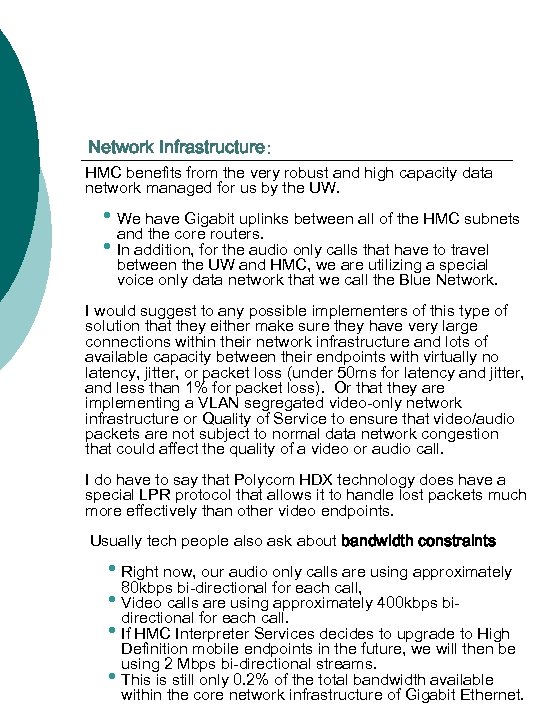 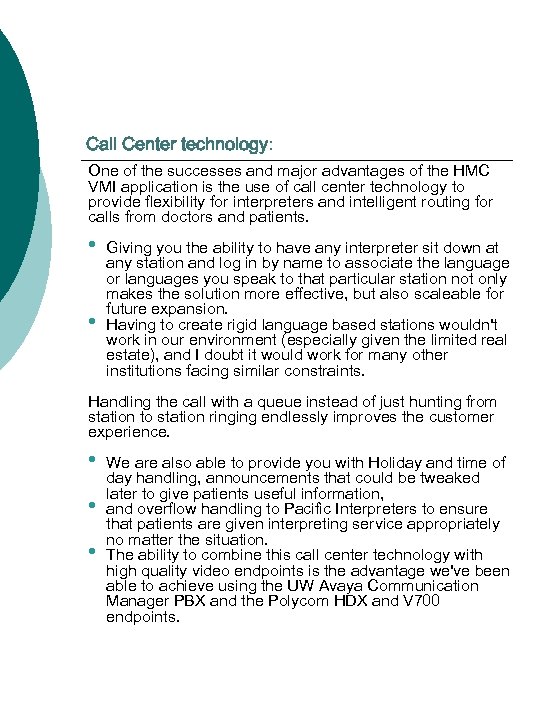 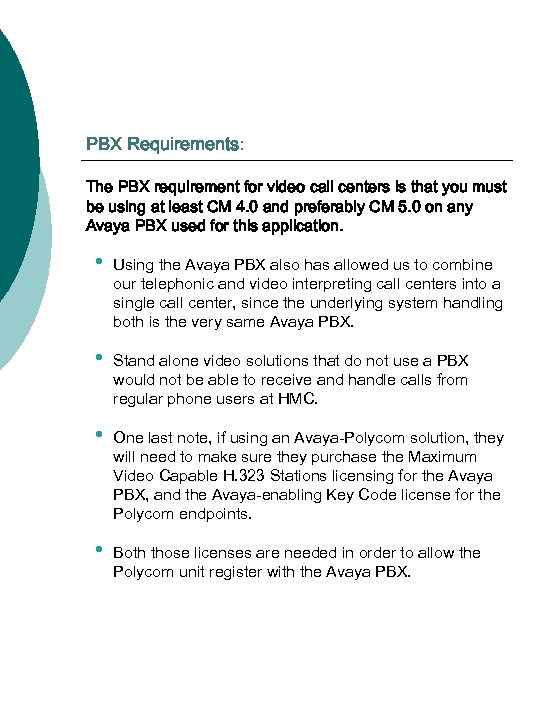 Скачать презентацию It is not the strongest of the species

It is not the strongest of the species that survives, nor is it the most intelligent… but the one most responsive to change Charles Darwin

General Approach: BEFORE hardware purchase / installation Partner with I. T. and Telecommunications l l Ask for demo units from vendors and TEST them onsite! Assess your I. T. infrastructure (see handout ) ¡ Have blueprints available for sites where VMI will be implemented l You will have to map the location of ports and electrical outlets in order to place units effectively OR l l You will have to map the location of electrical outlets in order to INSTALL ports convenient to said outlets Assess the phones currently in use by your providers ¡ Only digital, multi-directional phones will work with this technology l l Most of the phone sets in out-patient clinics are inexpensive, analog and unidirectional (This will NOT work) Do the provider phones have conference capability?

General Approach: AFTER hardware purchase / installation AVOID sub-optimal adoptions and utilization l l Train your providers rigorously! Have super-users identified from both groups (provider and interpreter) to help champion use ¡ Be willing to park someone on site the first week of implementation to hand hold providers/users Have a strategic, enterprise level plan l Stay focused on dramatic improvements in clinical practice

General Specs for IT There are many technical aspects to the project and even more technical obstacles that we've been able to overcome. I would say that anyone who is interested in doing such a project, make sure they have the support of technical engineering staff. Also, make sure that those engineering staff have a fairly in depth knowledge of PBX technology (including Call Center expertise), Video over IP technology, and Data Networking. Without in house expertise in all those areas, they could very well find themselves in a less than desirable situation with performance issues and an unstable application. Have someone from telecommunications and someone from IT as part of the task force that researches hardware options, purchases same, and then installs and rolls out the service for your facility. I've attached a drawing of our network supporting the VMI application. It shows the HMC Data network, the UW PBX, and the Interpreter Services Call Center and how they are linked. There is a missing line in my drawing, that has become ever so important since our deployment of the system, but is one component I underestimated when doing the initial design. That is the telephonic interpreting link which would be represented by a line going from an HMC PBX phone, through the HMC PBX, over to the UW PBX, and then to the Interpreter Services call center. Our network is actually considerably more complex than the drawing, but that has more to do with the intricate internetworking between HMC and UW, and our hopefully temporary PBX, Node UWD, that we are running due to necessary PBX software levels.

Video technology: • The general things to watch out for on the technical side though are as follows: • Make sure to use high quality video endpoints. • • • Interpreter Services is currently using High Definition Polycom HDX 4000 endpoints for the interpreters, and more affordable Standard Definition Polycom V 700 units for the mobile carts All of our VMI interpreters are currently using headsets manufactured by KOSS (model S/B 45) This makes the Interpreter call center HD-capable, should we decide in the future to upgrade the mobile units to HD (or simply implement HD mobile endpoints in later phases). Either way, an institution that wanted to implement a video call center should trial different video units before purchasing. This will ensure that they have the correct expectations in terms of video quality and also when they start using their units.

Audio quality: Aside from the audio issues we experienced with the audio -only sessions, the video technology we selected uses wideband audio codecs (protocols). • So for video calls between mobile and interpreter video endpoints, the range of audio frequencies that are transmitted captures a much larger (2 to 3 times more) portion of the true human voice compared to the audio only calls which are limited by the narrowband codecs of a traditional phone system. • Being able to hear the full frequency range of a conversation is especially important in interpreting applications, and is one very significant advantage of your video application over regular telephonic interpreting. Wideband audio codecs increase clarity and understanding as well as reduce interpreter strain. When using narrowband frequencies on a regular phone call, your brain must work very hard to piece together the missing frequencies based on the limited shadow frequencies (also called harmonic frequencies) that are actually transmitted over the plain phone network. • For Asian languages in particular, which are tonal and traditionally had the higher overtones cut off by regular telephone audio transmission, there is no cut-off of the higher frequencies, making comprehension that much easier for both sides.

Network Infrastructure: HMC benefits from the very robust and high capacity data network managed for us by the UW. • We have Gigabit uplinks between all of the HMC subnets and the core routers. • In addition, for the audio only calls that have to travel between the UW and HMC, we are utilizing a special voice only data network that we call the Blue Network. I would suggest to any possible implementers of this type of solution that they either make sure they have very large connections within their network infrastructure and lots of available capacity between their endpoints with virtually no latency, jitter, or packet loss (under 50 ms for latency and jitter, and less than 1% for packet loss). Or that they are implementing a VLAN segregated video-only network infrastructure or Quality of Service to ensure that video/audio packets are not subject to normal data network congestion that could affect the quality of a video or audio call. I do have to say that Polycom HDX technology does have a special LPR protocol that allows it to handle lost packets much more effectively than other video endpoints. Usually tech people also ask about bandwidth constraints • Right now, our audio only calls are using approximately 80 kbps bi-directional for each call, • Video calls are using approximately 400 kbps bidirectional for each call. • If HMC Interpreter Services decides to upgrade to High Definition mobile endpoints in the future, we will then be using 2 Mbps bi-directional streams. • This is still only 0. 2% of the total bandwidth available within the core network infrastructure of Gigabit Ethernet.

Call Center technology: One of the successes and major advantages of the HMC VMI application is the use of call center technology to provide flexibility for interpreters and intelligent routing for calls from doctors and patients. • • Giving you the ability to have any interpreter sit down at any station and log in by name to associate the language or languages you speak to that particular station not only makes the solution more effective, but also scaleable for future expansion. Having to create rigid language based stations wouldn't work in our environment (especially given the limited real estate), and I doubt it would work for many other institutions facing similar constraints. Handling the call with a queue instead of just hunting from station to station ringing endlessly improves the customer experience. • • • We are also able to provide you with Holiday and time of day handling, announcements that could be tweaked later to give patients useful information, and overflow handling to Pacific Interpreters to ensure that patients are given interpreting service appropriately no matter the situation. The ability to combine this call center technology with high quality video endpoints is the advantage we've been able to achieve using the UW Avaya Communication Manager PBX and the Polycom HDX and V 700 endpoints.

PBX Requirements: The PBX requirement for video call centers is that you must be using at least CM 4. 0 and preferably CM 5. 0 on any Avaya PBX used for this application. • Using the Avaya PBX also has allowed us to combine our telephonic and video interpreting call centers into a single call center, since the underlying system handling both is the very same Avaya PBX. • Stand alone video solutions that do not use a PBX would not be able to receive and handle calls from regular phone users at HMC. • One last note, if using an Avaya-Polycom solution, they will need to make sure they purchase the Maximum Video Capable H. 323 Stations licensing for the Avaya PBX, and the Avaya-enabling Key Code license for the Polycom endpoints. • Both those licenses are needed in order to allow the Polycom unit register with the Avaya PBX.