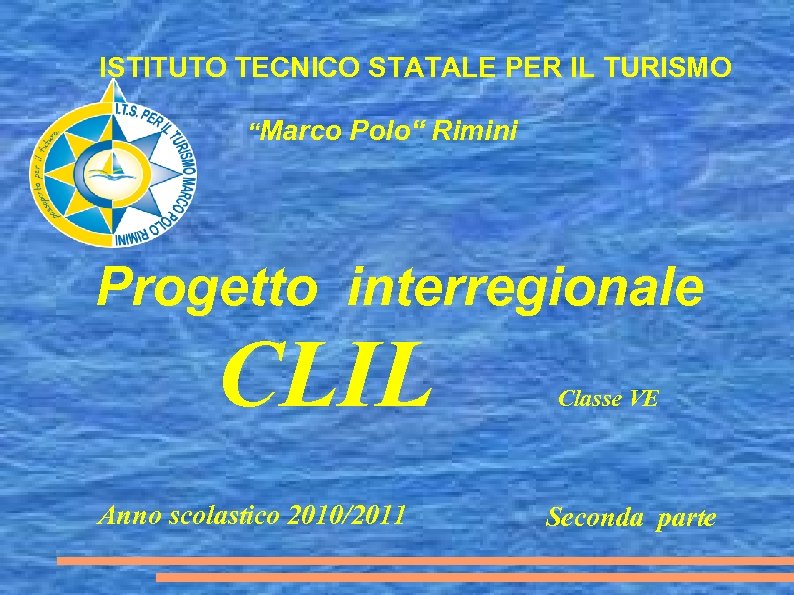 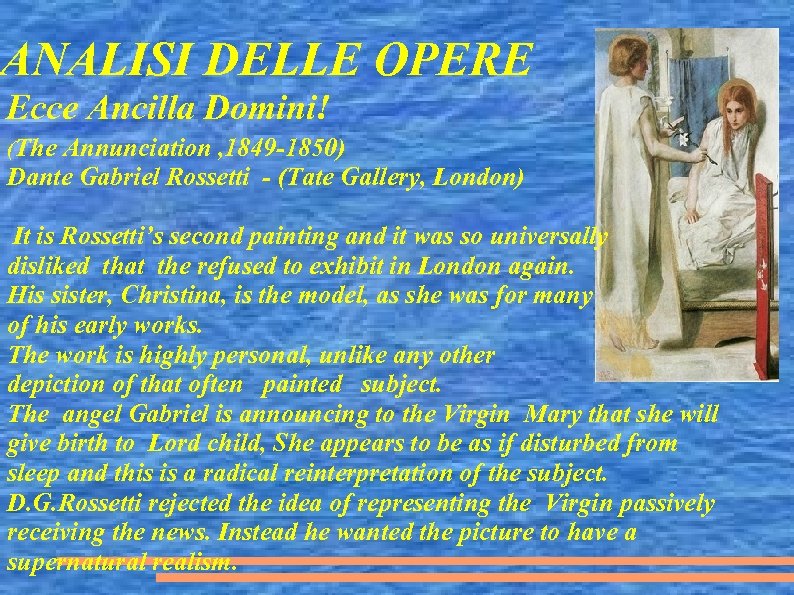 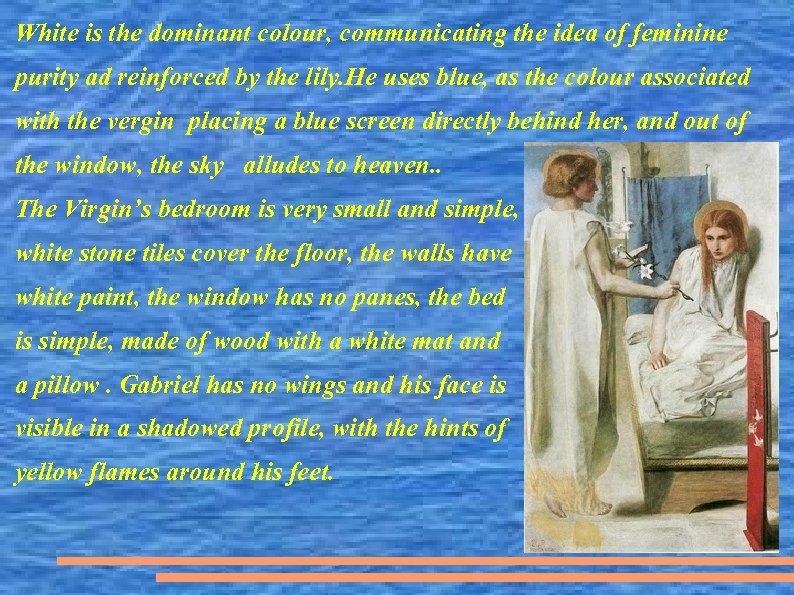 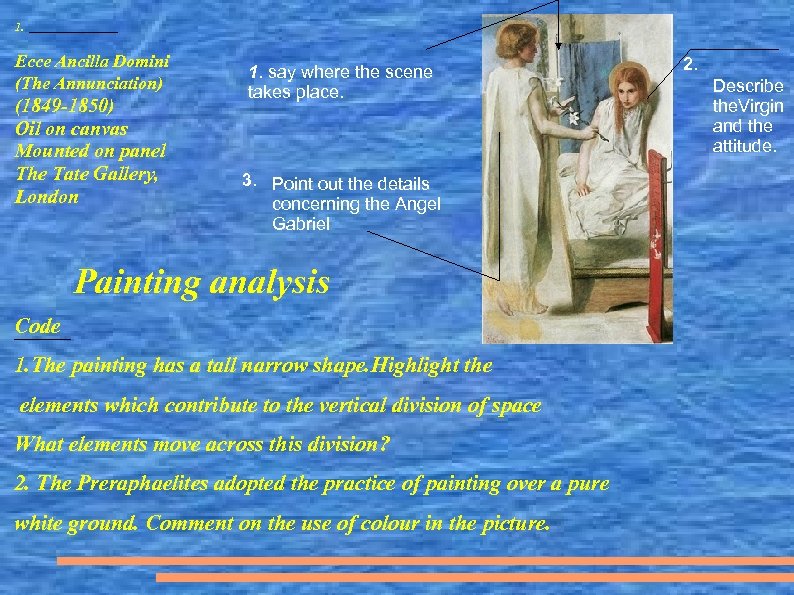 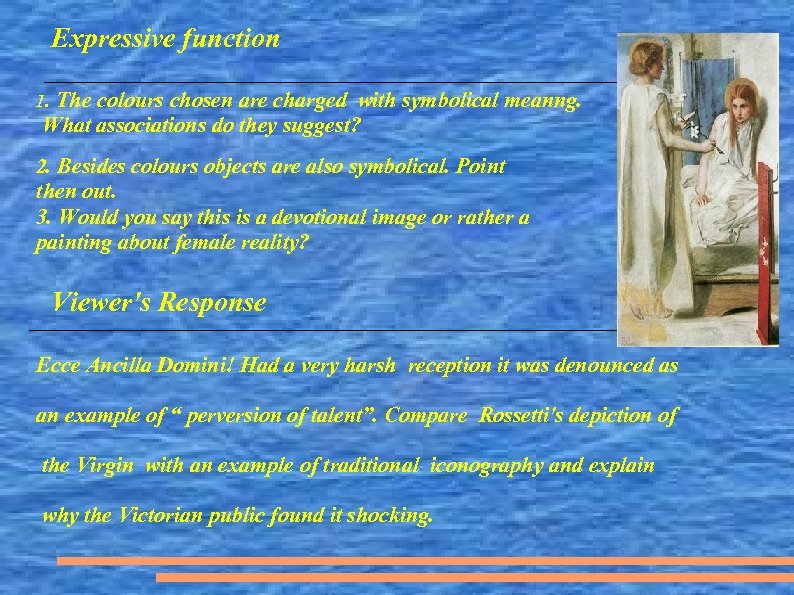 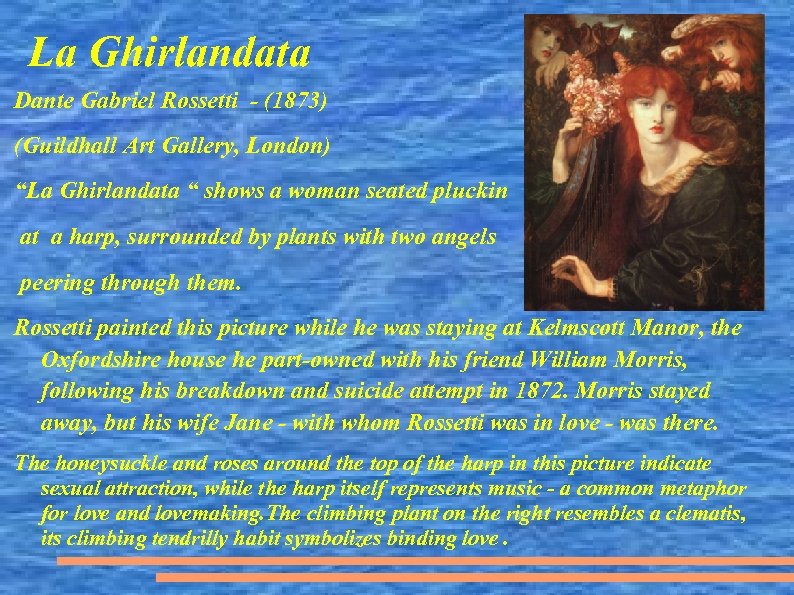 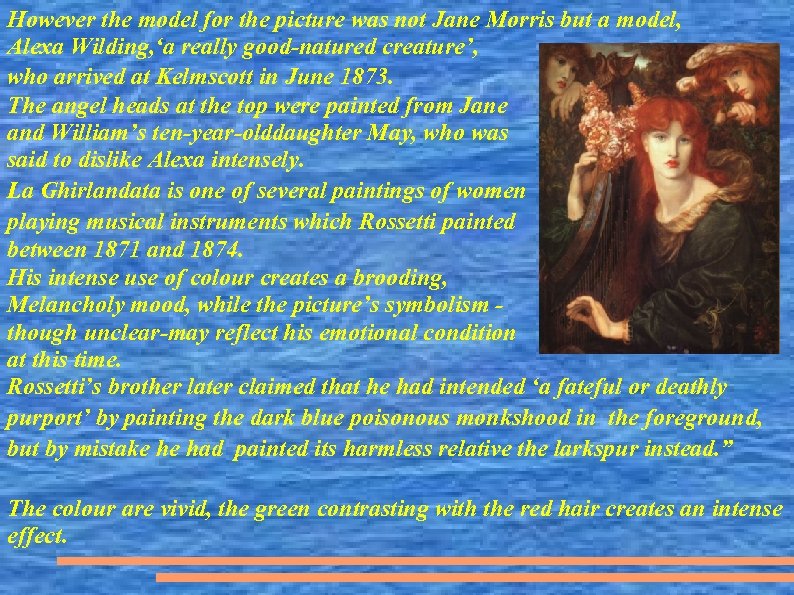 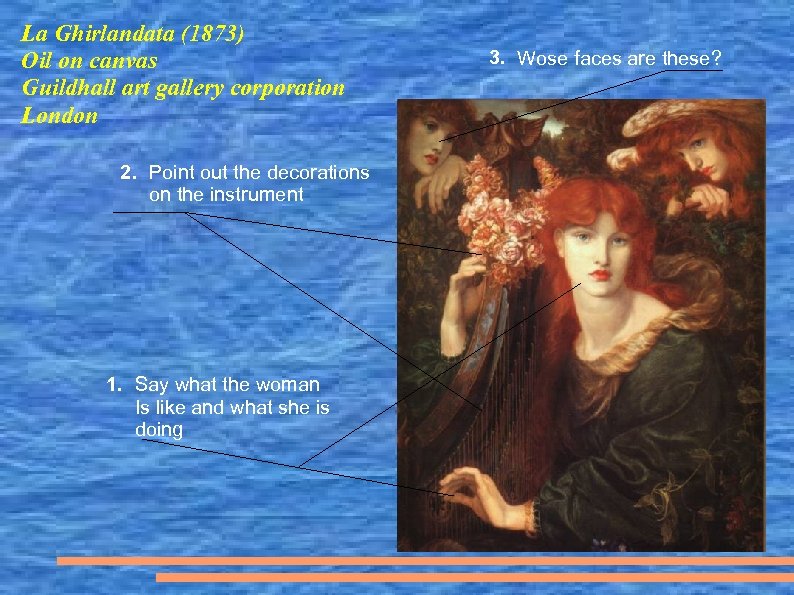 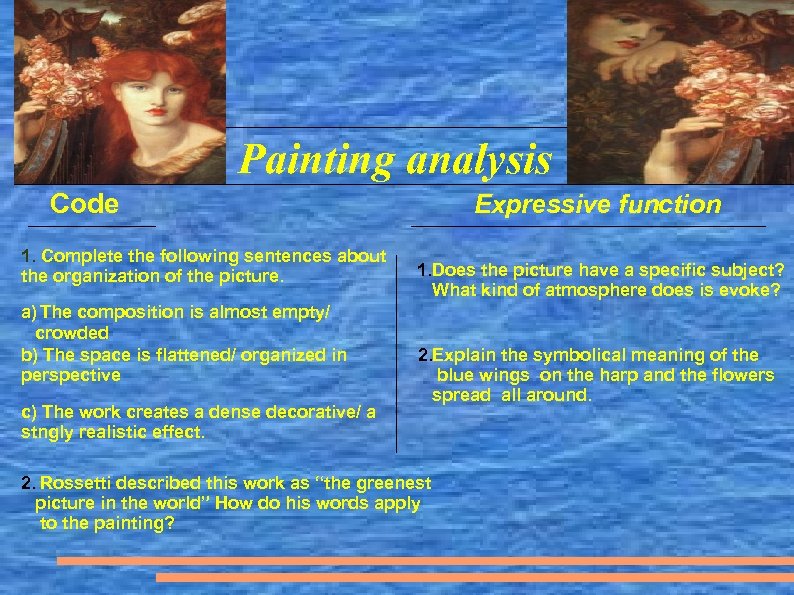 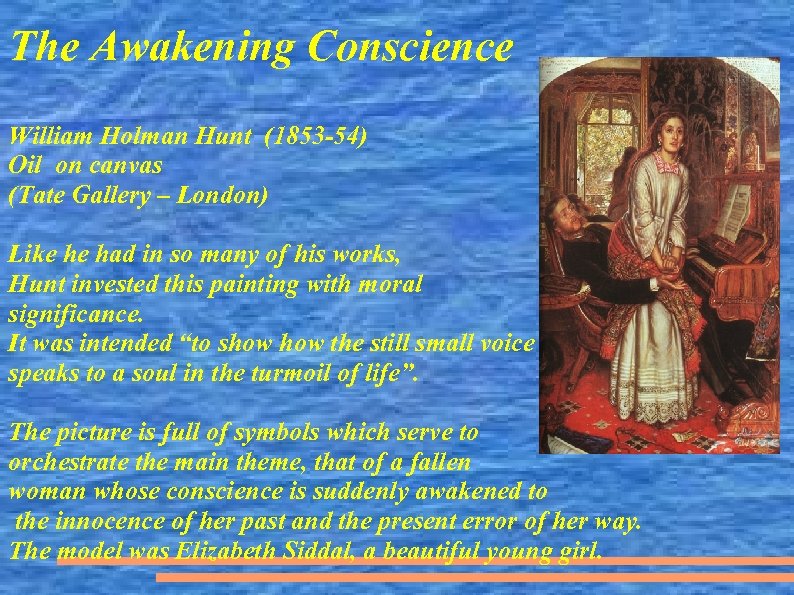 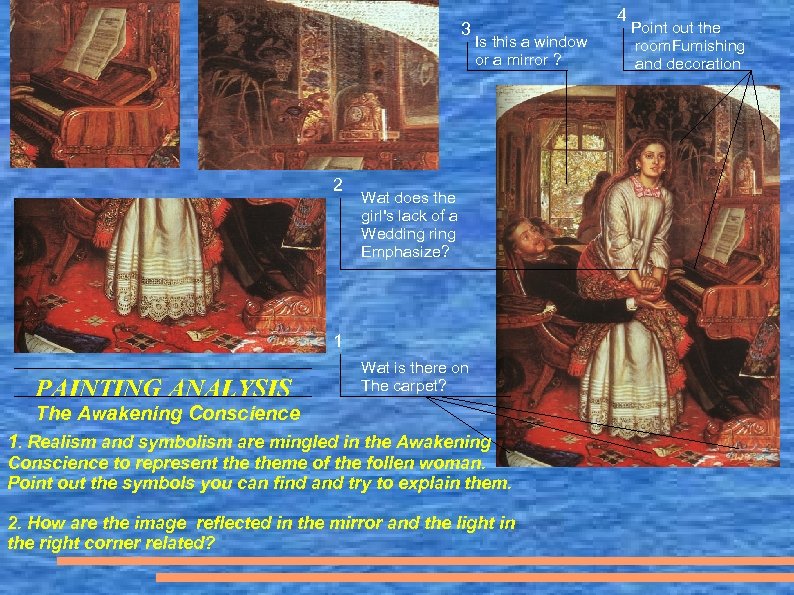 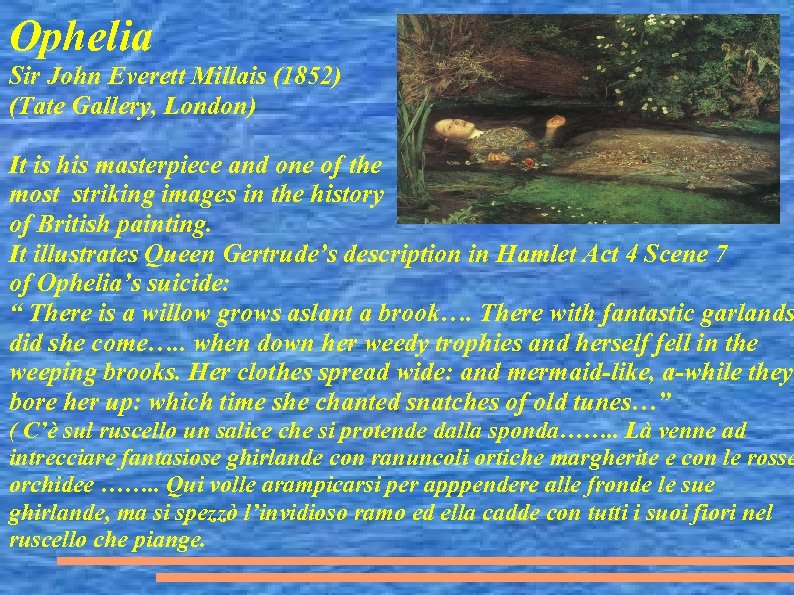 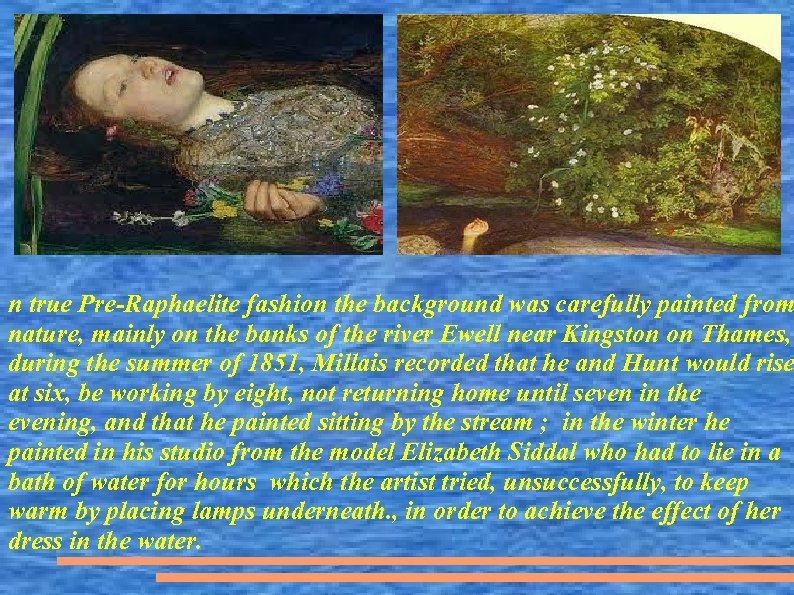 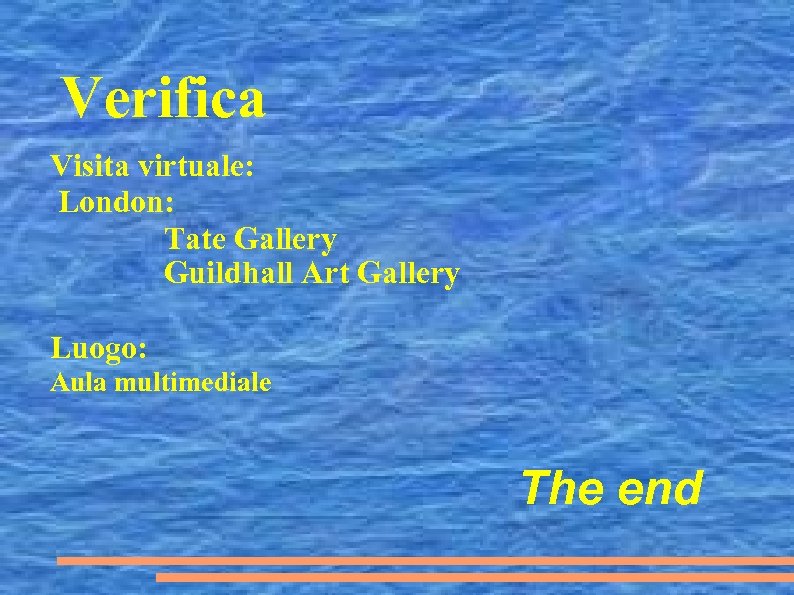 ANALISI DELLE OPERE Ecce Ancilla Domini! (The Annunciation , 1849 -1850) Dante Gabriel Rossetti - (Tate Gallery, London) It is Rossetti’s second painting and it was so universally disliked that the refused to exhibit in London again. His sister, Christina, is the model, as she was for many of his early works. The work is highly personal, unlike any other depiction of that often painted subject. The angel Gabriel is announcing to the Virgin Mary that she will give birth to Lord child, She appears to be as if disturbed from sleep and this is a radical reinterpretation of the subject. D. G. Rossetti rejected the idea of representing the Virgin passively receiving the news. Instead he wanted the picture to have a supernatural realism.

White is the dominant colour, communicating the idea of feminine purity ad reinforced by the lily. He uses blue, as the colour associated with the vergin placing a blue screen directly behind her, and out of the window, the sky alludes to heaven. . The Virgin’s bedroom is very small and simple, white stone tiles cover the floor, the walls have white paint, the window has no panes, the bed is simple, made of wood with a white mat and a pillow. Gabriel has no wings and his face is visible in a shadowed profile, with the hints of yellow flames around his feet.

1. Ecce Ancilla Domini (The Annunciation) (1849 -1850) Oil on canvas Mounted on panel The Tate Gallery, London 1. say where the scene takes place. 3. Point out the details concerning the Angel Gabriel Painting analysis Code 1. The painting has a tall narrow shape. Highlight the elements which contribute to the vertical division of space What elements move across this division? 2. The Preraphaelites adopted the practice of painting over a pure white ground. Comment on the use of colour in the picture. 2. Describe the. Virgin and the attitude.

Expressive function The colours chosen are charged with symbolical meanng. What associations do they suggest? 1. 2. Besides colours objects are also symbolical. Point then out. 3. Would you say this is a devotional image or rather a painting about female reality? Viewer's Response Ecce Ancilla Domini! Had a very harsh reception it was denounced as an example of “ perversion of talent”. Compare Rossetti's depiction of the Virgin with an example of traditional iconography and explain why the Victorian public found it shocking.

La Ghirlandata Dante Gabriel Rossetti - (1873) (Guildhall Art Gallery, London) “La Ghirlandata “ shows a woman seated pluckin at a harp, surrounded by plants with two angels peering through them. Rossetti painted this picture while he was staying at Kelmscott Manor, the Oxfordshire house he part-owned with his friend William Morris, following his breakdown and suicide attempt in 1872. Morris stayed away, but his wife Jane - with whom Rossetti was in love - was there. The honeysuckle and roses around the top of the harp in this picture indicate sexual attraction, while the harp itself represents music - a common metaphor for love and lovemaking. The climbing plant on the right resembles a clematis, its climbing tendrilly habit symbolizes binding love.

However the model for the picture was not Jane Morris but a model, Alexa Wilding, ‘a really good-natured creature’, who arrived at Kelmscott in June 1873. The angel heads at the top were painted from Jane and William’s ten-year-olddaughter May, who was said to dislike Alexa intensely. La Ghirlandata is one of several paintings of women playing musical instruments which Rossetti painted between 1871 and 1874. His intense use of colour creates a brooding, Melancholy mood, while the picture’s symbolism though unclear-may reflect his emotional condition at this time. Rossetti’s brother later claimed that he had intended ‘a fateful or deathly purport’ by painting the dark blue poisonous monkshood in the foreground, but by mistake he had painted its harmless relative the larkspur instead. ” The colour are vivid, the green contrasting with the red hair creates an intense effect.

La Ghirlandata (1873) Oil on canvas Guildhall art gallery corporation London 2. Point out the decorations on the instrument 1. Say what the woman Is like and what she is doing 3. Wose faces are these?

Painting analysis Code 1. Complete the following sentences about the organization of the picture. a) The composition is almost empty/ crowded b) The space is flattened/ organized in perspective c) The work creates a dense decorative/ a stngly realistic effect. Expressive function 1. Does the picture have a specific subject? What kind of atmosphere does is evoke? 2. Explain the symbolical meaning of the blue wings on the harp and the flowers spread all around. 2. Rossetti described this work as “the greenest picture in the world” How do his words apply to the painting?

The Awakening Conscience William Holman Hunt (1853 -54) Oil on canvas (Tate Gallery – London) Like he had in so many of his works, Hunt invested this painting with moral significance. It was intended “to show the still small voice speaks to a soul in the turmoil of life”. The picture is full of symbols which serve to orchestrate the main theme, that of a fallen woman whose conscience is suddenly awakened to the innocence of her past and the present error of her way. The model was Elizabeth Siddal, a beautiful young girl.

3 2 4 Is this a window or a mirror ? Wat does the girl's lack of a Wedding ring Emphasize? 1 PAINTING ANALYSIS Wat is there on The carpet? The Awakening Conscience 1. Realism and symbolism are mingled in the Awakening Conscience to represent theme of the follen woman. Point out the symbols you can find and try to explain them. 2. How are the image reflected in the mirror and the light in the right corner related? Point out the room. Fumishing and decoration

n true Pre-Raphaelite fashion the background was carefully painted from nature, mainly on the banks of the river Ewell near Kingston on Thames, during the summer of 1851, Millais recorded that he and Hunt would rise at six, be working by eight, not returning home until seven in the evening, and that he painted sitting by the stream ; in the winter he painted in his studio from the model Elizabeth Siddal who had to lie in a bath of water for hours which the artist tried, unsuccessfully, to keep warm by placing lamps underneath. , in order to achieve the effect of her dress in the water.