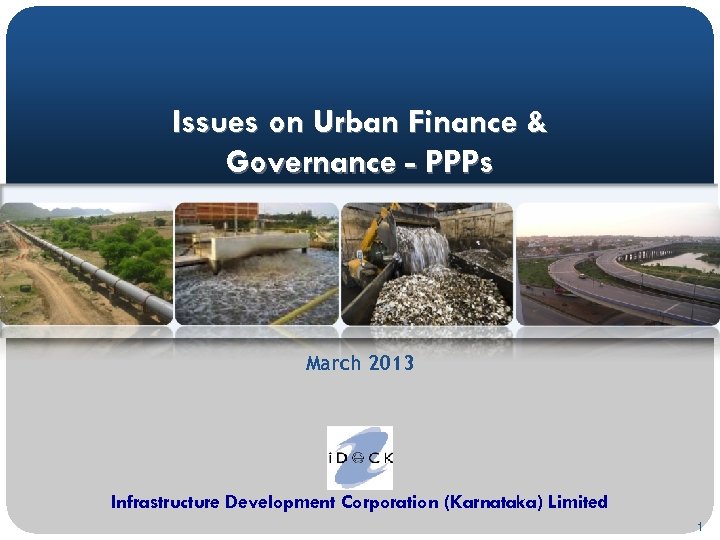 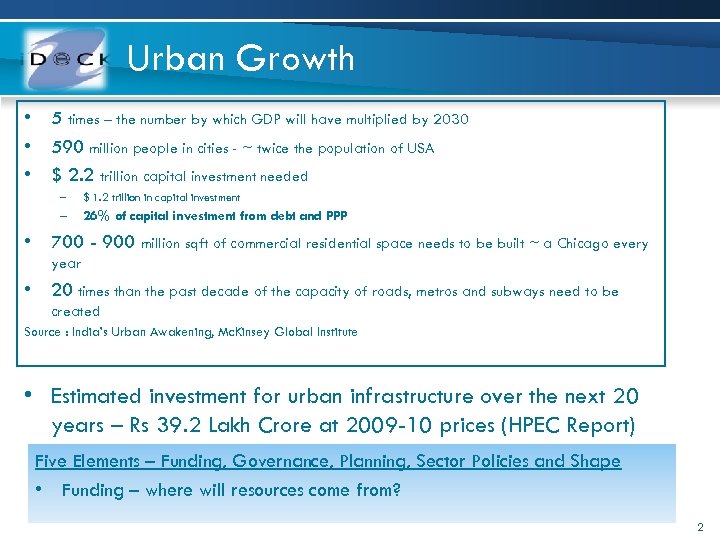 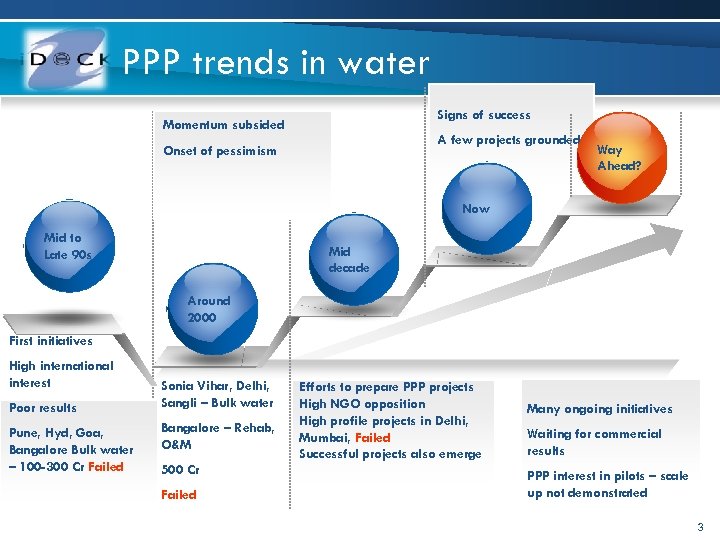 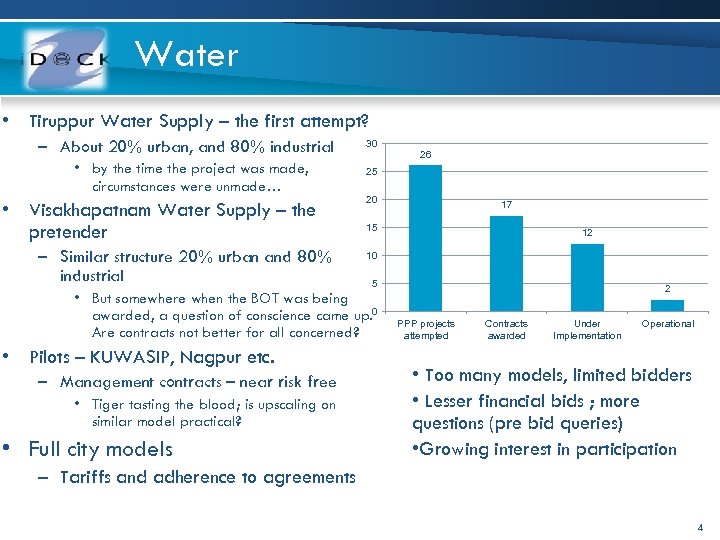 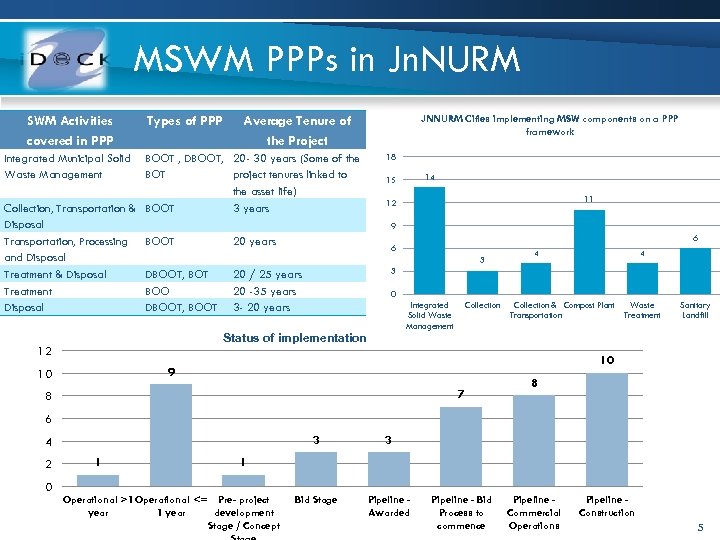 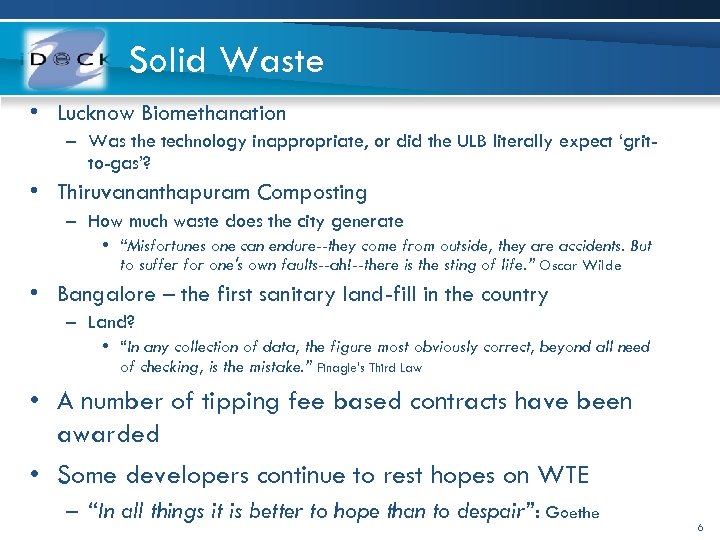 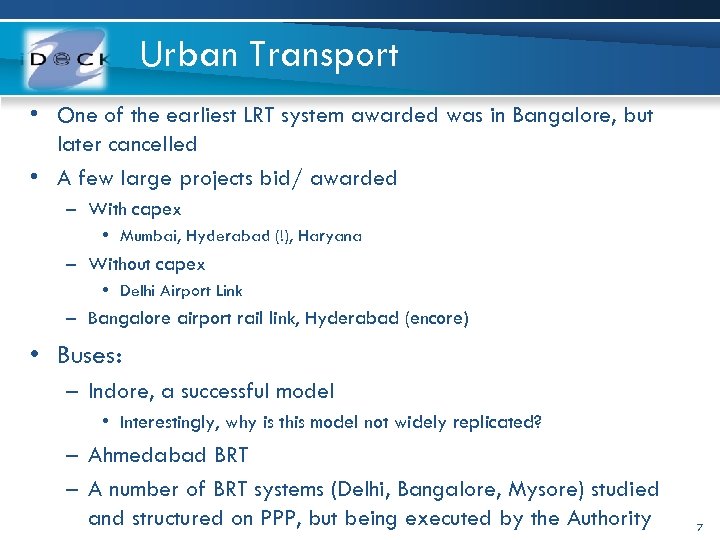 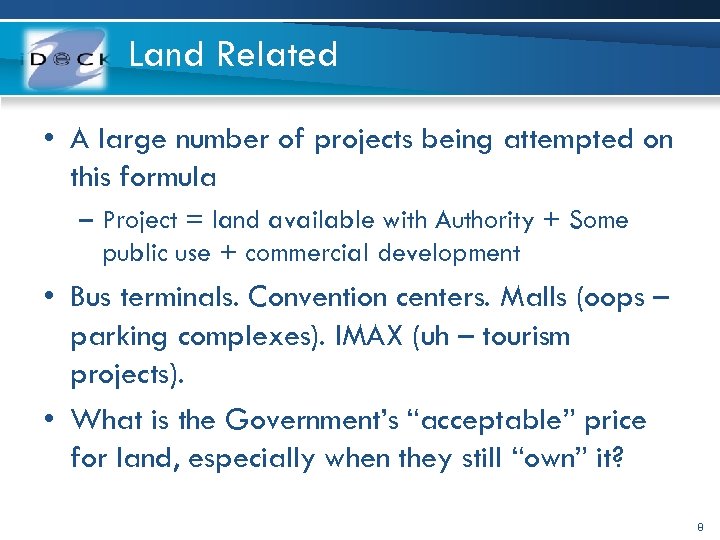 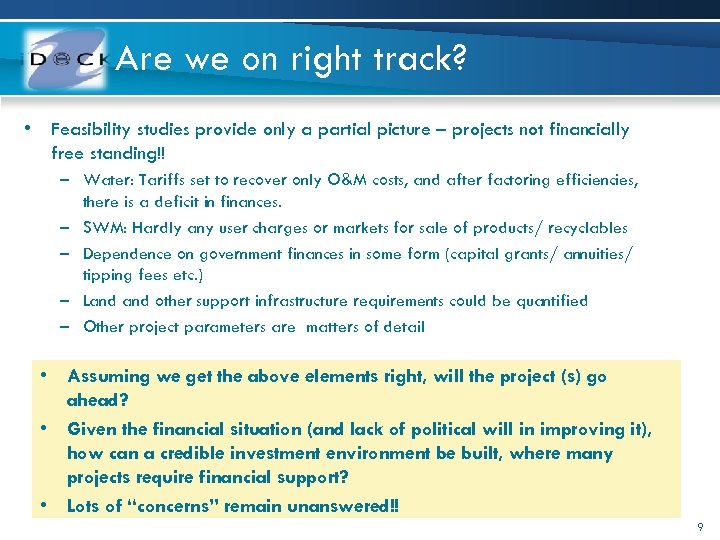 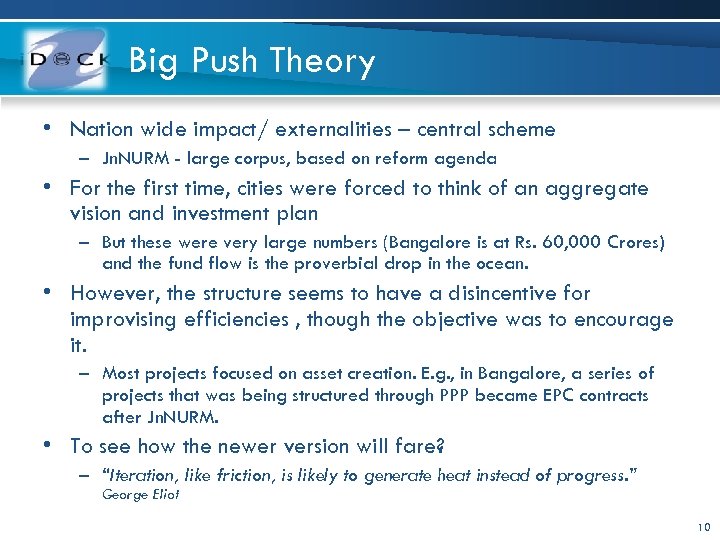 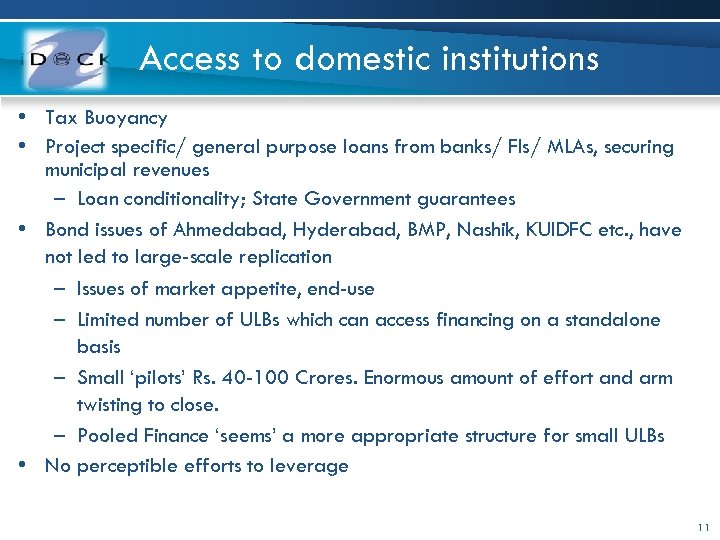 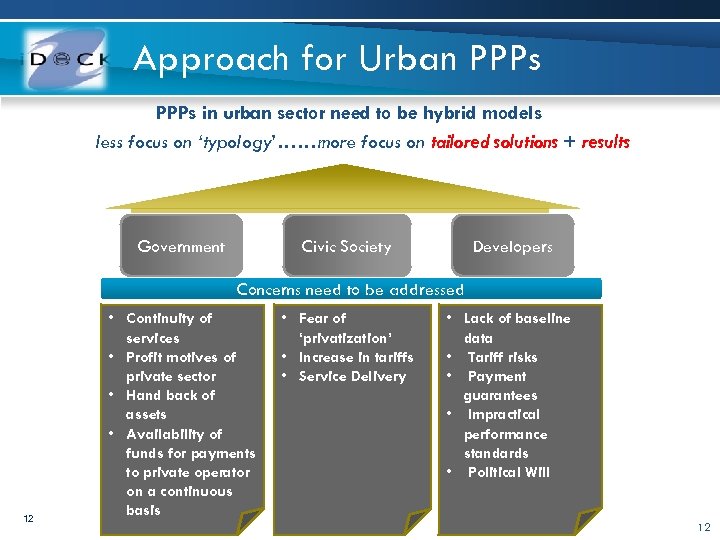 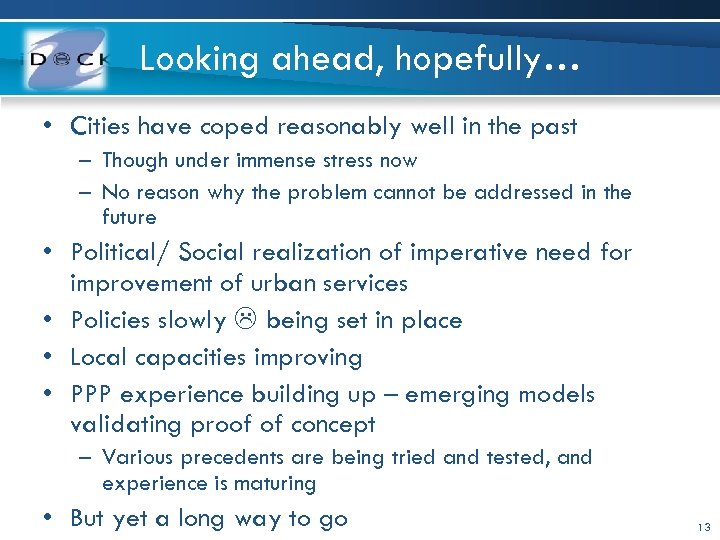 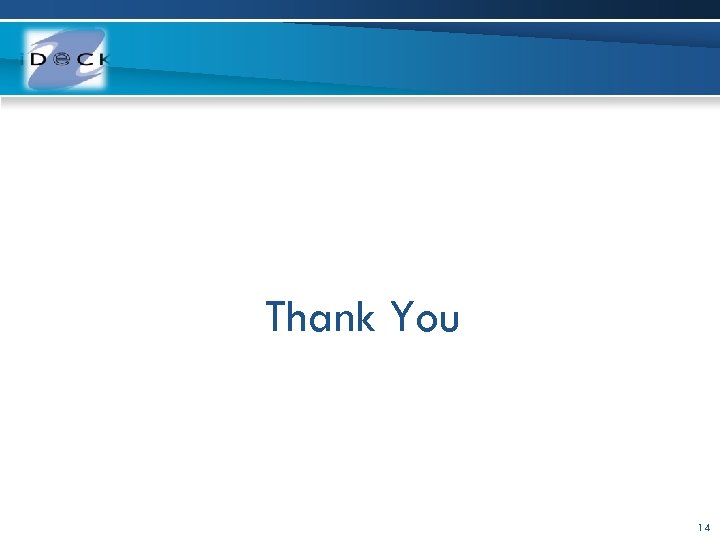 Urban Growth • 5 times – the number by which GDP will have multiplied by 2030 • 590 million people in cities - ~ twice the population of USA • $ 2. 2 trillion capital investment needed – $ 1. 2 trillion in capital investment – 26% of capital investment from debt and PPP • 700 - 900 million sqft of commercial residential space needs to be built ~ a Chicago every year • 20 times than the past decade of the capacity of roads, metros and subways need to be created Source : India’s Urban Awakening, Mc. Kinsey Global Institute • Estimated investment for urban infrastructure over the next 20 years – Rs 39. 2 Lakh Crore at 2009 -10 prices (HPEC Report) Five Elements – Funding, Governance, Planning, Sector Policies and Shape • Funding – where will resources come from? 2

Water • Tiruppur Water Supply – the first attempt? – About 20% urban, and 80% industrial • by the time the project was made, circumstances were unmade… • Visakhapatnam Water Supply – the pretender – Similar structure 20% urban and 80% industrial 30 25 20 – Management contracts – near risk free • Tiger tasting the blood; is upscaling on similar model practical? • Full city models 17 15 12 10 5 • But somewhere when the BOT was being awarded, a question of conscience came up. 0 Are contracts not better for all concerned? • Pilots – KUWASIP, Nagpur etc. 26 2 PPP projects attempted Contracts awarded Under Implementation Operational • Too many models, limited bidders • Lesser financial bids ; more questions (pre bid queries) • Growing interest in participation – Tariffs and adherence to agreements 4

Solid Waste • Lucknow Biomethanation – Was the technology inappropriate, or did the ULB literally expect ‘gritto-gas’? • Thiruvananthapuram Composting – How much waste does the city generate • “Misfortunes one can endure--they come from outside, they are accidents. But to suffer for one's own faults--ah!--there is the sting of life. ” Oscar Wilde • Bangalore – the first sanitary land-fill in the country – Land? • “In any collection of data, the figure most obviously correct, beyond all need of checking, is the mistake. ” Finagle's Third Law • A number of tipping fee based contracts have been awarded • Some developers continue to rest hopes on WTE – “In all things it is better to hope than to despair”: Goethe 6

Urban Transport • One of the earliest LRT system awarded was in Bangalore, but later cancelled • A few large projects bid/ awarded – With capex • Mumbai, Hyderabad (!), Haryana – Without capex • Delhi Airport Link – Bangalore airport rail link, Hyderabad (encore) • Buses: – Indore, a successful model • Interestingly, why is this model not widely replicated? – Ahmedabad BRT – A number of BRT systems (Delhi, Bangalore, Mysore) studied and structured on PPP, but being executed by the Authority 7

Land Related • A large number of projects being attempted on this formula – Project = land available with Authority + Some public use + commercial development • Bus terminals. Convention centers. Malls (oops – parking complexes). IMAX (uh – tourism projects). • What is the Government’s “acceptable” price for land, especially when they still “own” it? 8

Are we on right track? • Feasibility studies provide only a partial picture – projects not financially free standing!! – Water: Tariffs set to recover only O&M costs, and after factoring efficiencies, there is a deficit in finances. – SWM: Hardly any user charges or markets for sale of products/ recyclables – Dependence on government finances in some form (capital grants/ annuities/ tipping fees etc. ) – Land other support infrastructure requirements could be quantified – Other project parameters are matters of detail • Assuming we get the above elements right, will the project (s) go ahead? • Given the financial situation (and lack of political will in improving it), how can a credible investment environment be built, where many projects require financial support? • Lots of “concerns” remain unanswered!! 9

Big Push Theory • Nation wide impact/ externalities – central scheme – Jn. NURM - large corpus, based on reform agenda • For the first time, cities were forced to think of an aggregate vision and investment plan – But these were very large numbers (Bangalore is at Rs. 60, 000 Crores) and the fund flow is the proverbial drop in the ocean. • However, the structure seems to have a disincentive for improvising efficiencies , though the objective was to encourage it. – Most projects focused on asset creation. E. g. , in Bangalore, a series of projects that was being structured through PPP became EPC contracts after Jn. NURM. • To see how the newer version will fare? – “Iteration, like friction, is likely to generate heat instead of progress. ” George Eliot 10

Looking ahead, hopefully… • Cities have coped reasonably well in the past – Though under immense stress now – No reason why the problem cannot be addressed in the future • Political/ Social realization of imperative need for improvement of urban services • Policies slowly being set in place • Local capacities improving • PPP experience building up – emerging models validating proof of concept – Various precedents are being tried and tested, and experience is maturing • But yet a long way to go 13

Would you ever take out a loan? What