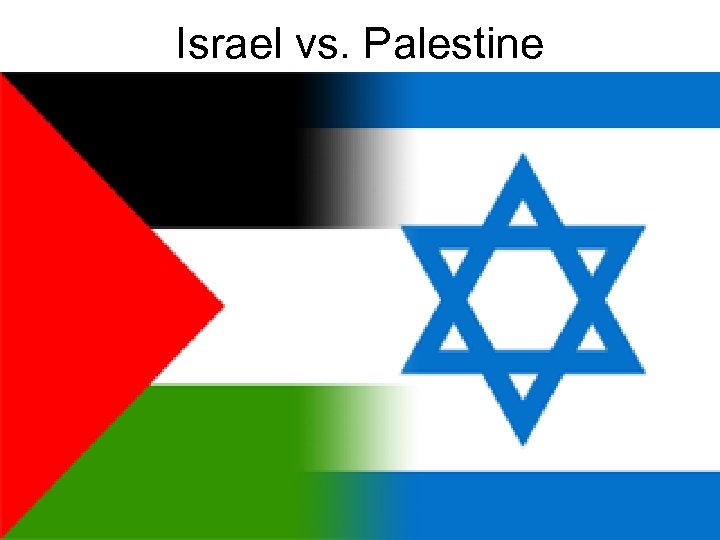 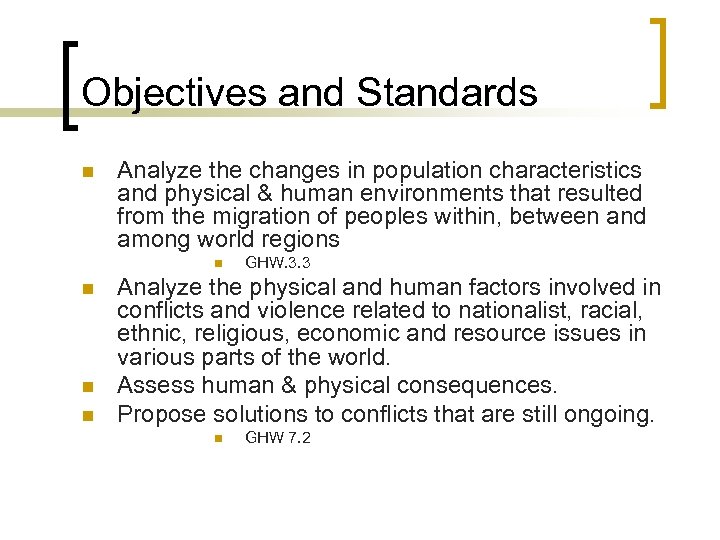 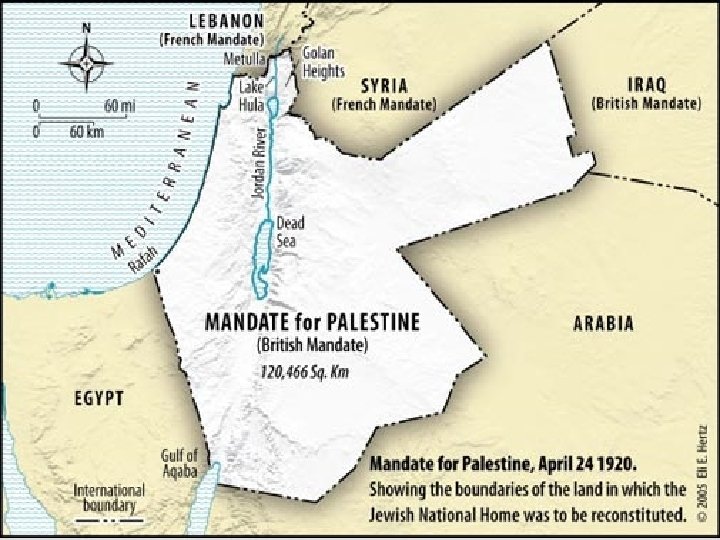 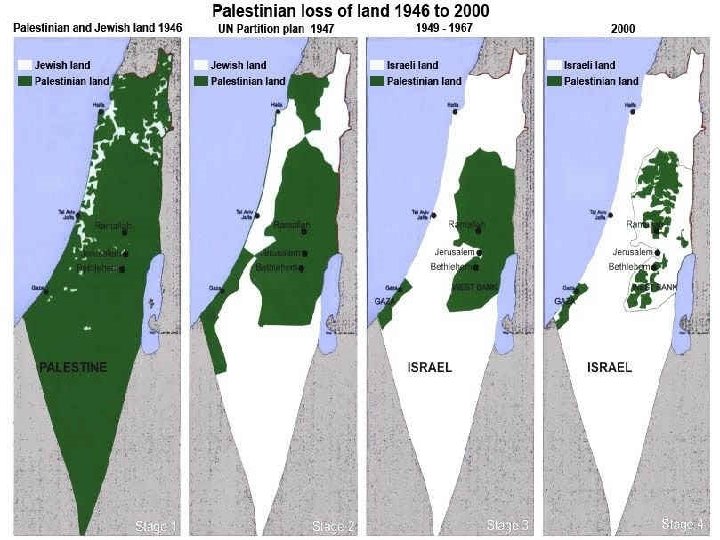 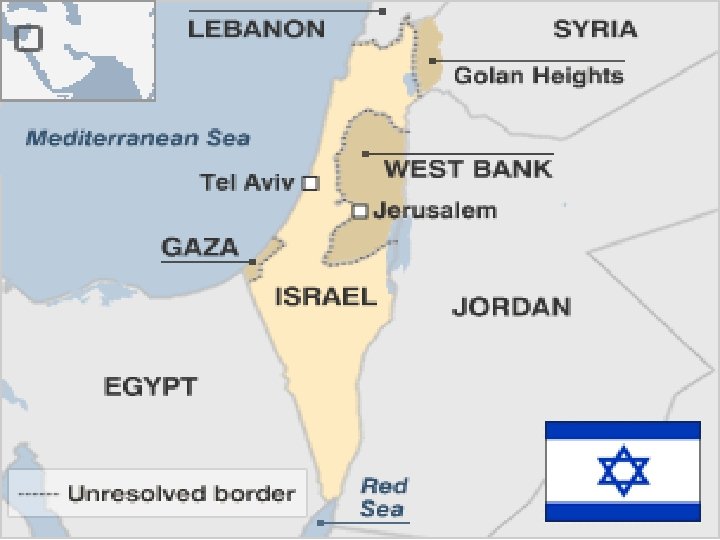 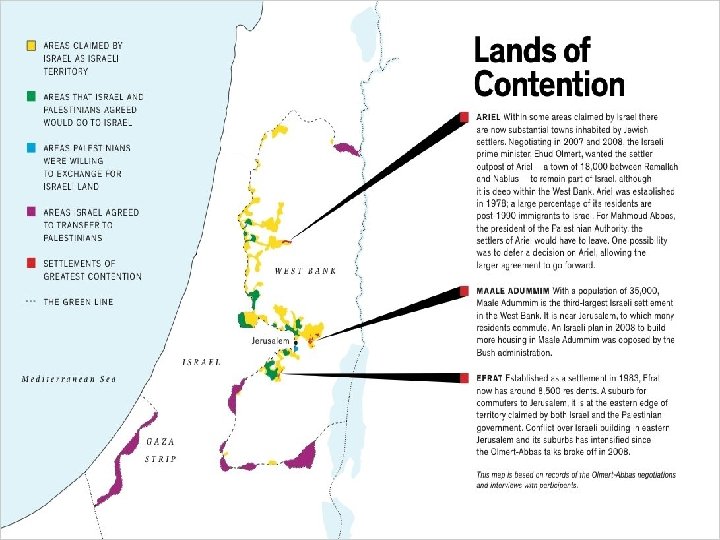 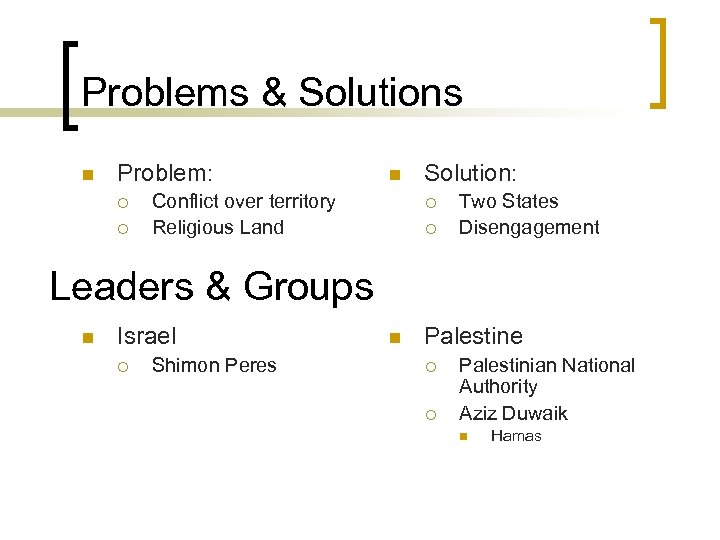 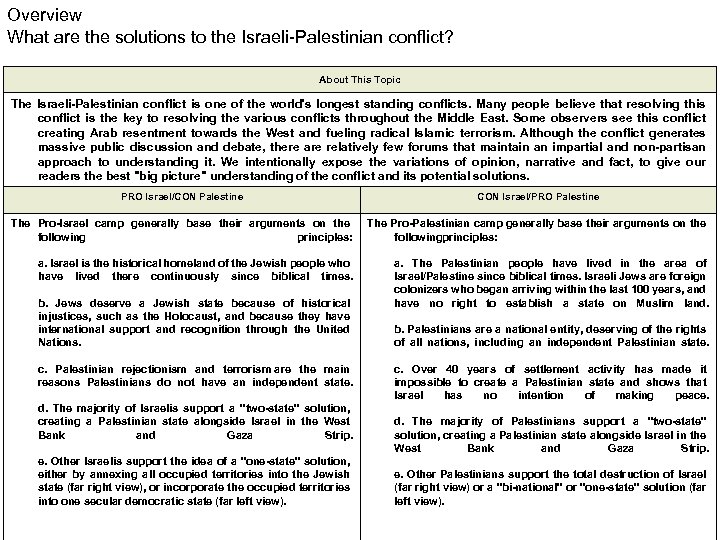 Objectives and Standards n Analyze the changes in population characteristics and physical & human environments that resulted from the migration of peoples within, between and among world regions n n GHW. 3. 3 Analyze the physical and human factors involved in conflicts and violence related to nationalist, racial, ethnic, religious, economic and resource issues in various parts of the world. Assess human & physical consequences. Propose solutions to conflicts that are still ongoing. n GHW 7. 2

Overview What are the solutions to the Israeli-Palestinian conflict? About This Topic The Israeli-Palestinian conflict is one of the world's longest standing conflicts. Many people believe that resolving this conflict is the key to resolving the various conflicts throughout the Middle East. Some observers see this conflict creating Arab resentment towards the West and fueling radical Islamic terrorism. Although the conflict generates massive public discussion and debate, there are relatively few forums that maintain an impartial and non-partisan approach to understanding it. We intentionally expose the variations of opinion, narrative and fact, to give our readers the best "big picture" understanding of the conflict and its potential solutions. PRO Israel/CON Palestine CON Israel/PRO Palestine The Pro-Israel camp generally base their arguments on the following principles: The Pro-Palestinian camp generally base their arguments on the followingprinciples: a. Israel is the historical homeland of the Jewish people who have lived there continuously since biblical times. a. The Palestinian people have lived in the area of Israel/Palestine since biblical times. Israeli Jews are foreign colonizers who began arriving within the last 100 years, and have no right to establish a state on Muslim land. b. Jews deserve a Jewish state because of historical injustices, such as the Holocaust, and because they have international support and recognition through the United Nations. c. Palestinian rejectionism and terrorism are the main reasons Palestinians do not have an independent state. d. The majority of Israelis support a "two-state" solution, creating a Palestinian state alongside Israel in the West Bank and Gaza Strip. e. Other Israelis support the idea of a "one-state" solution, either by annexing all occupied territories into the Jewish state (far right view), or incorporate the occupied territories into one secular democratic state (far left view). b. Palestinians are a national entity, deserving of the rights of all nations, including an independent Palestinian state. c. Over 40 years of settlement activity has made it impossible to create a Palestinian state and shows that Israel has no intention of making peace. d. The majority of Palestinians support a "two-state" solution, creating a Palestinian state alongside Israel in the West Bank and Gaza Strip. e. Other Palestinians support the total destruction of Israel (far right view) or a "bi-national" or "one-state" solution (far left view).