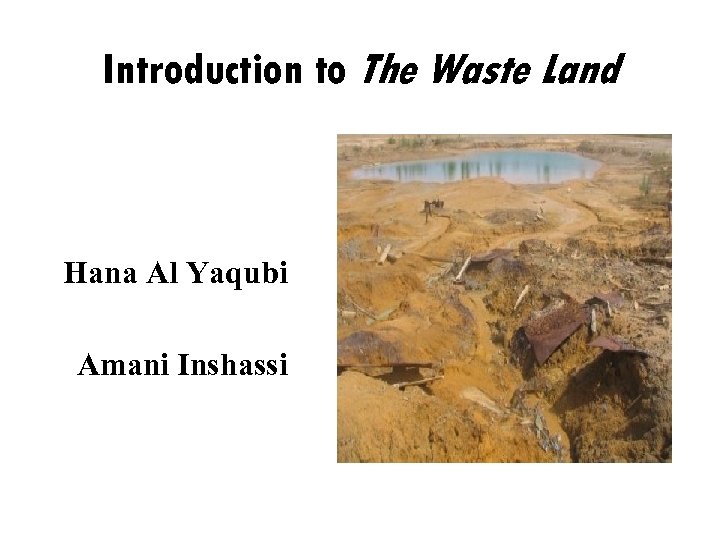 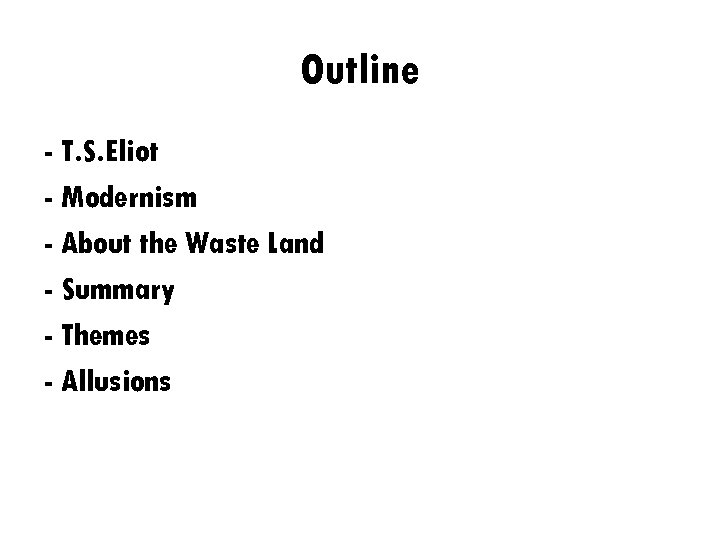 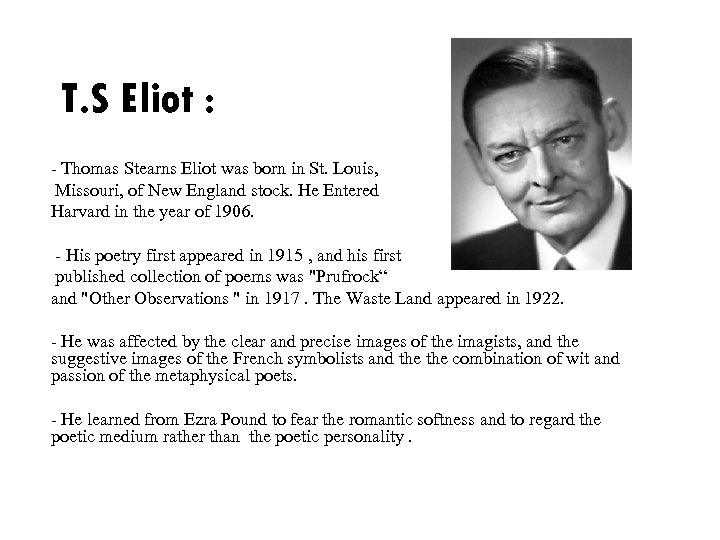 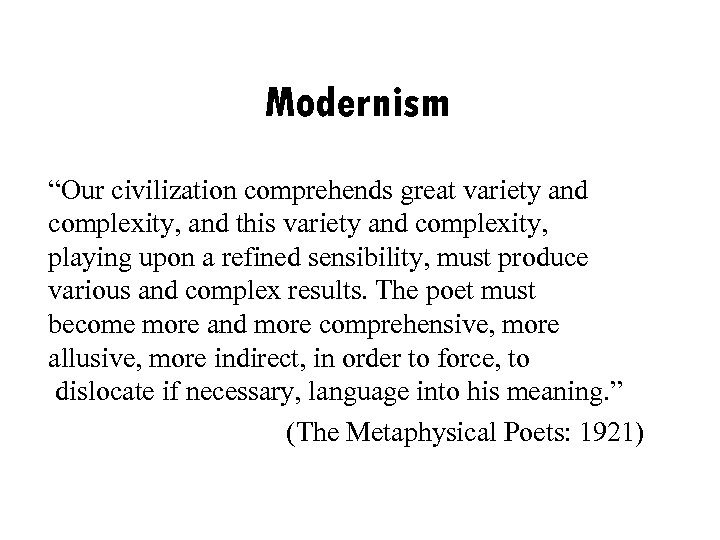 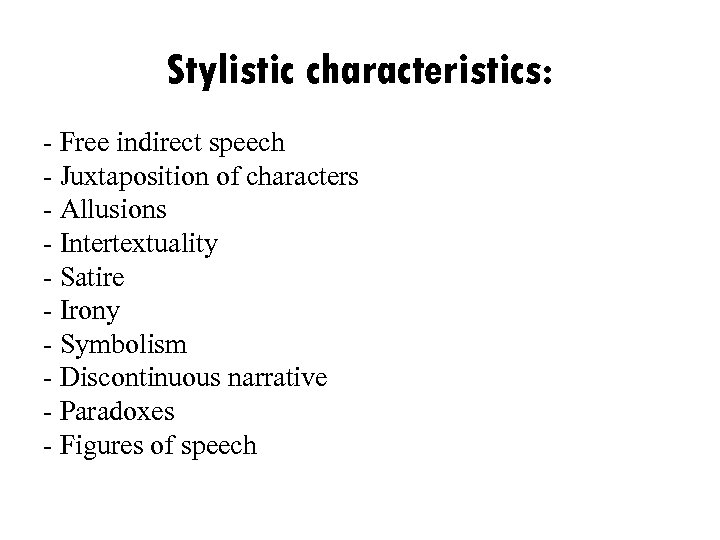 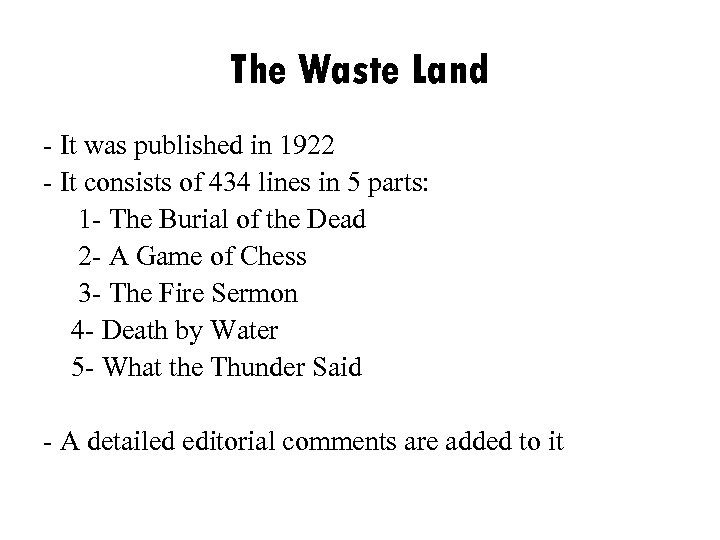 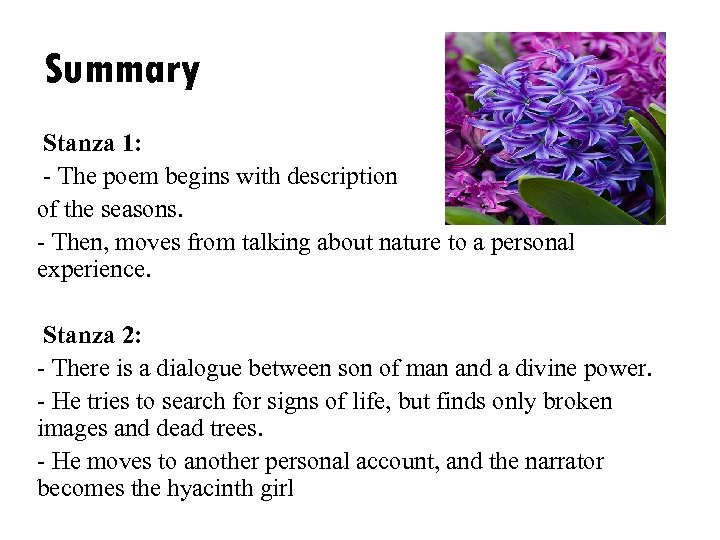 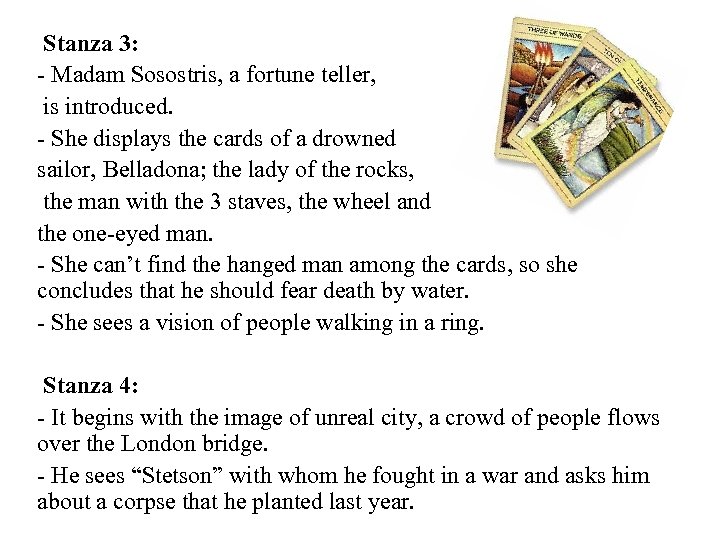 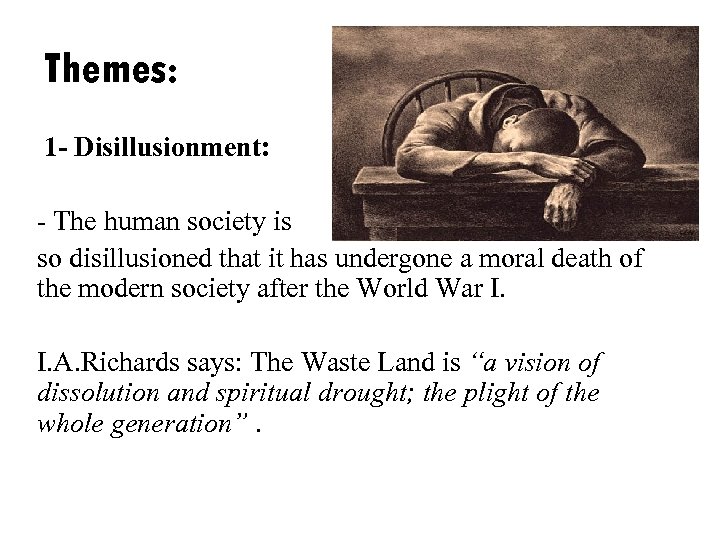 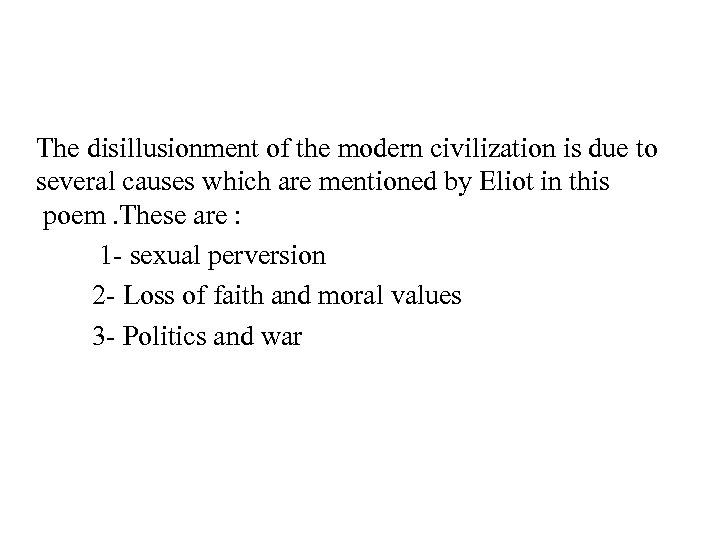 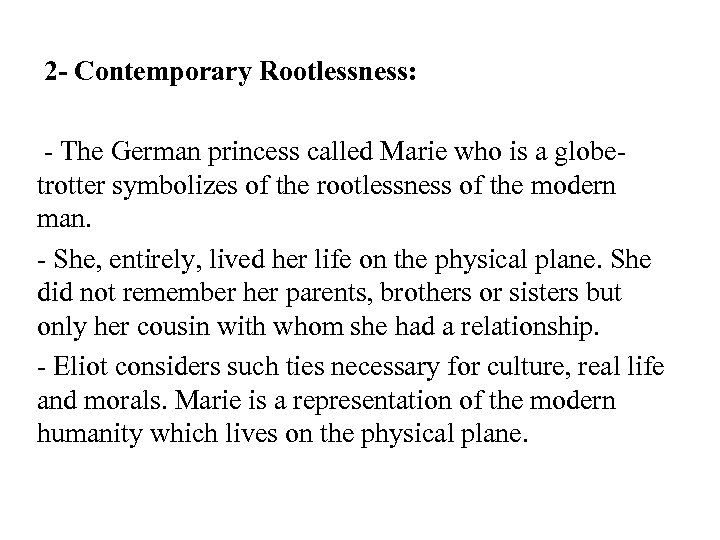 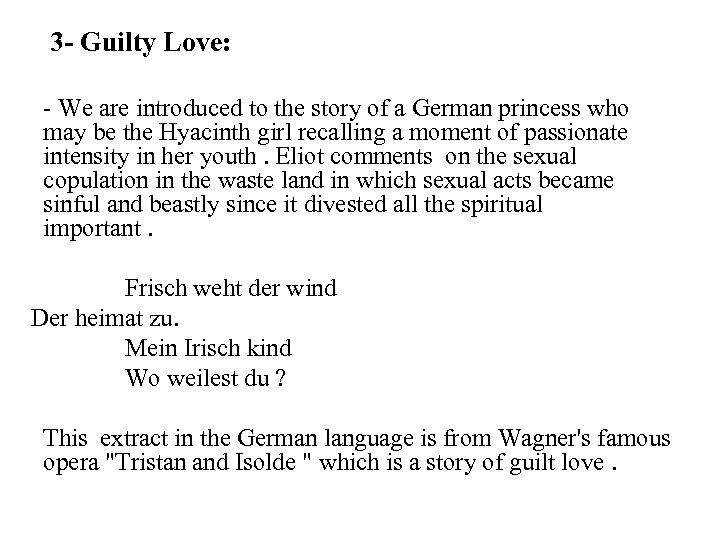 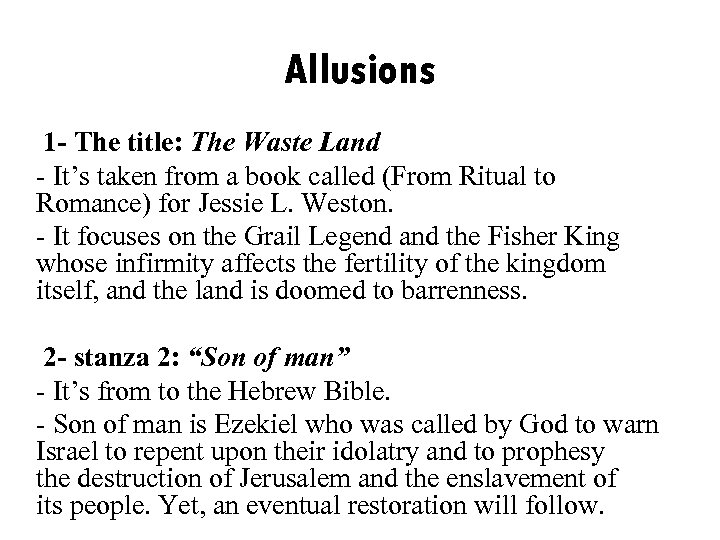 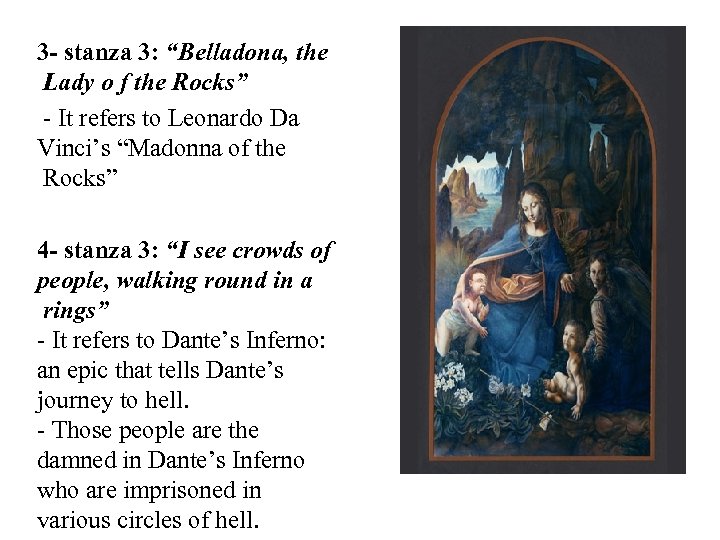 T. S Eliot : - Thomas Stearns Eliot was born in St. Louis, Missouri, of New England stock. He Entered Harvard in the year of 1906. - His poetry first appeared in 1915 , and his first published collection of poems was "Prufrock“ and "Other Observations " in 1917. The Waste Land appeared in 1922. - He was affected by the clear and precise images of the imagists, and the suggestive images of the French symbolists and the combination of wit and passion of the metaphysical poets. - He learned from Ezra Pound to fear the romantic softness and to regard the poetic medium rather than the poetic personality.

Summary Stanza 1: - The poem begins with description of the seasons. - Then, moves from talking about nature to a personal experience. Stanza 2: - There is a dialogue between son of man and a divine power. - He tries to search for signs of life, but finds only broken images and dead trees. - He moves to another personal account, and the narrator becomes the hyacinth girl

Stanza 3: - Madam Sosostris, a fortune teller, is introduced. - She displays the cards of a drowned sailor, Belladona; the lady of the rocks, the man with the 3 staves, the wheel and the one-eyed man. - She can’t find the hanged man among the cards, so she concludes that he should fear death by water. - She sees a vision of people walking in a ring. Stanza 4: - It begins with the image of unreal city, a crowd of people flows over the London bridge. - He sees “Stetson” with whom he fought in a war and asks him about a corpse that he planted last year.

Themes: 1 - Disillusionment: - The human society is so disillusioned that it has undergone a moral death of the modern society after the World War I. I. A. Richards says: The Waste Land is “a vision of dissolution and spiritual drought; the plight of the whole generation”.

The disillusionment of the modern civilization is due to several causes which are mentioned by Eliot in this poem. These are : 1 - sexual perversion 2 - Loss of faith and moral values 3 - Politics and war

2 - Contemporary Rootlessness: - The German princess called Marie who is a globetrotter symbolizes of the rootlessness of the modern man. - She, entirely, lived her life on the physical plane. She did not remember her parents, brothers or sisters but only her cousin with whom she had a relationship. - Eliot considers such ties necessary for culture, real life and morals. Marie is a representation of the modern humanity which lives on the physical plane.

3 - Guilty Love: - We are introduced to the story of a German princess who may be the Hyacinth girl recalling a moment of passionate intensity in her youth. Eliot comments on the sexual copulation in the waste land in which sexual acts became sinful and beastly since it divested all the spiritual important. Frisch weht der wind Der heimat zu. Mein Irisch kind Wo weilest du ? This extract in the German language is from Wagner's famous opera "Tristan and Isolde " which is a story of guilt love.

Allusions 1 - The title: The Waste Land - It’s taken from a book called (From Ritual to Romance) for Jessie L. Weston. - It focuses on the Grail Legend and the Fisher King whose infirmity affects the fertility of the kingdom itself, and the land is doomed to barrenness. 2 - stanza 2: “Son of man” - It’s from to the Hebrew Bible. - Son of man is Ezekiel who was called by God to warn Israel to repent upon their idolatry and to prophesy the destruction of Jerusalem and the enslavement of its people. Yet, an eventual restoration will follow.

Topic 4. Ecological and economic problems of