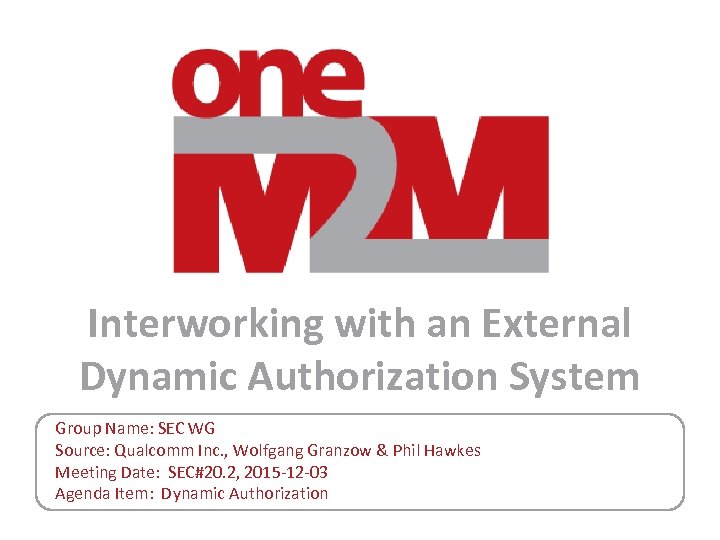 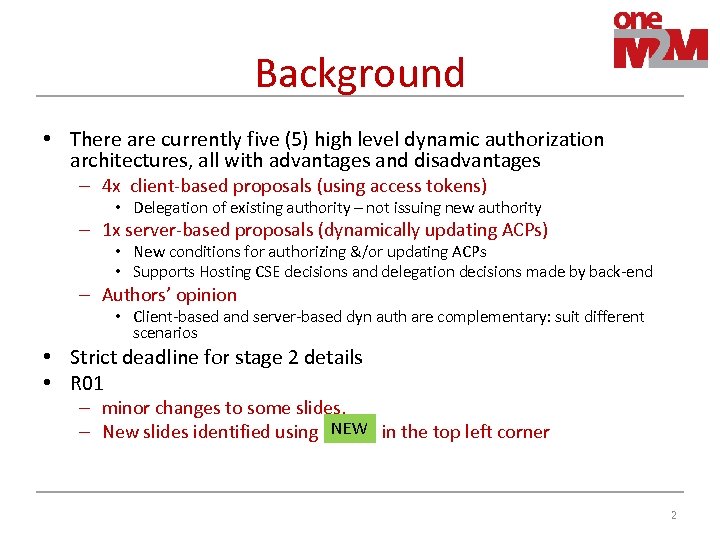 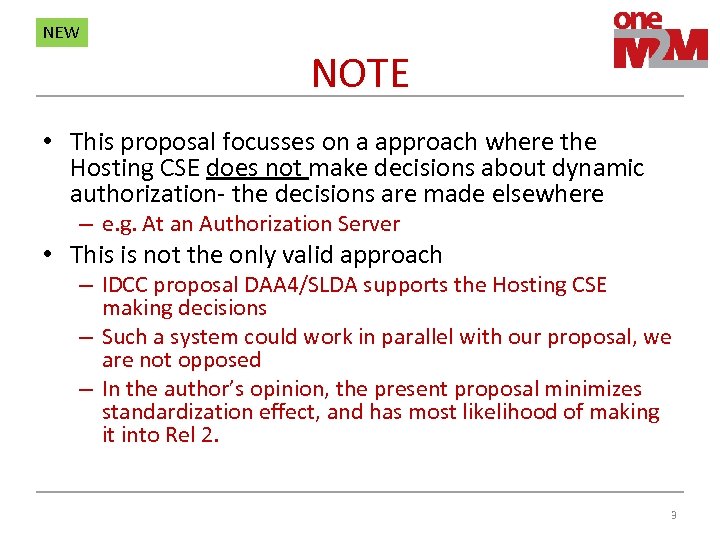 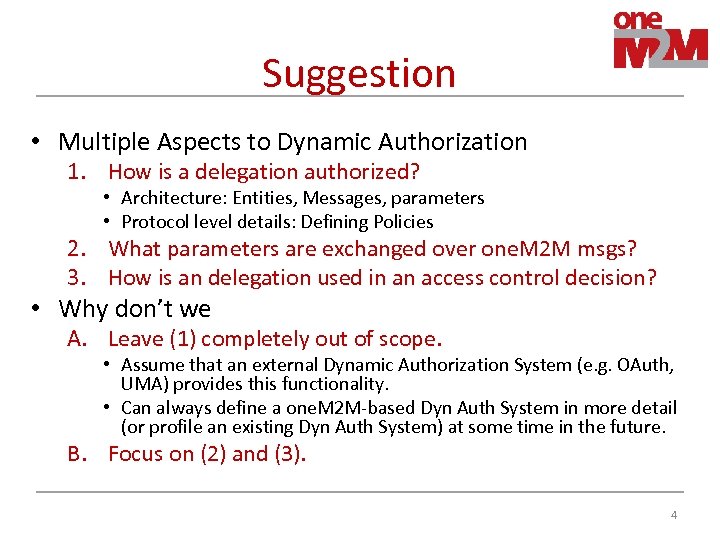 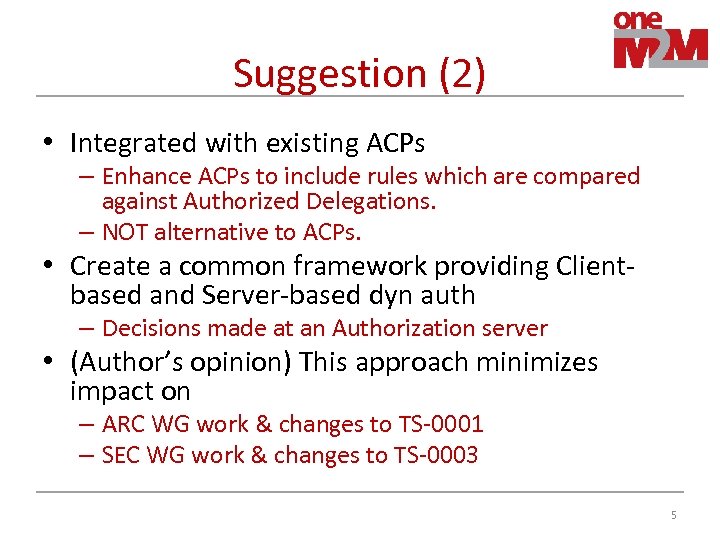 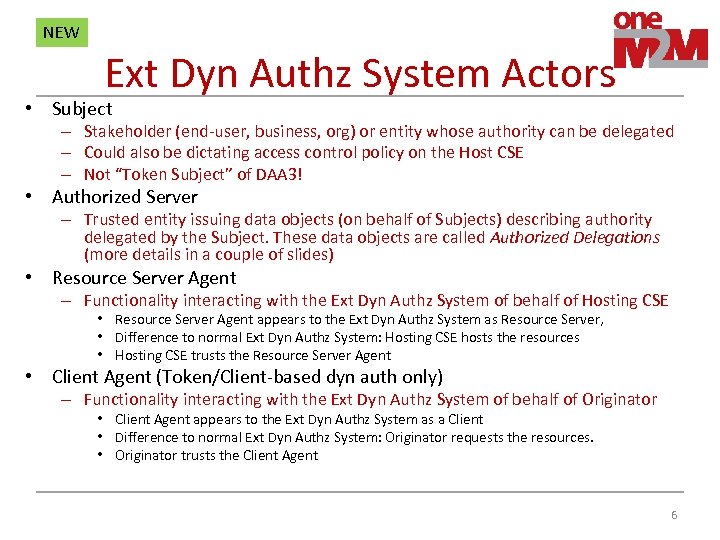 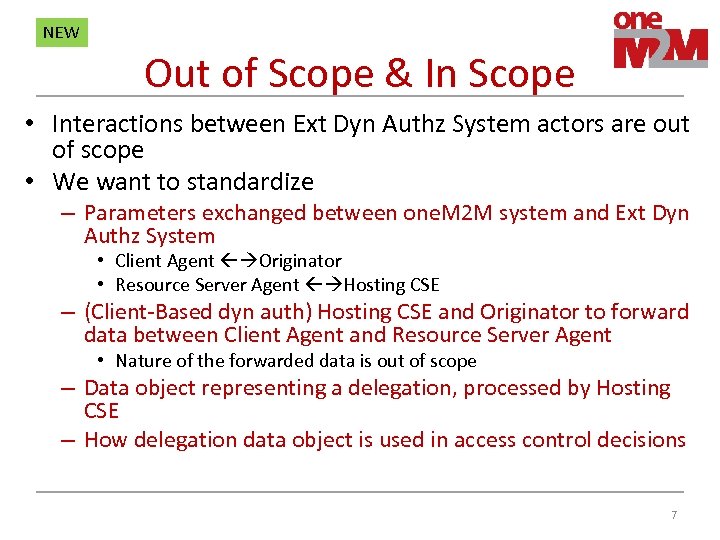 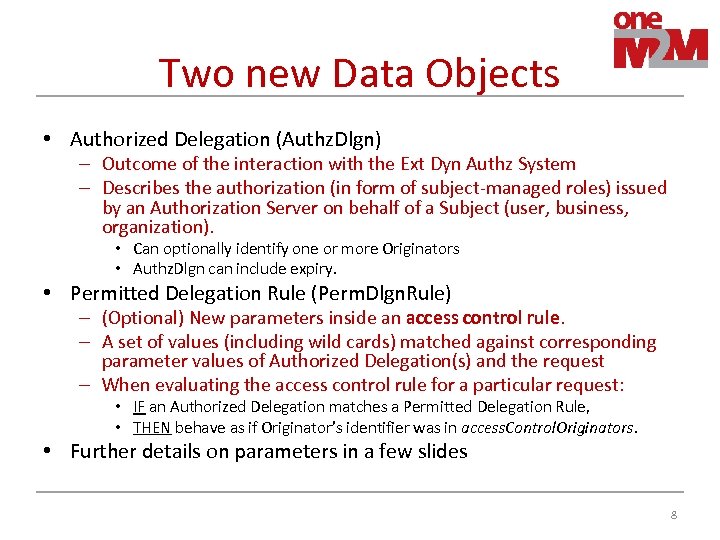 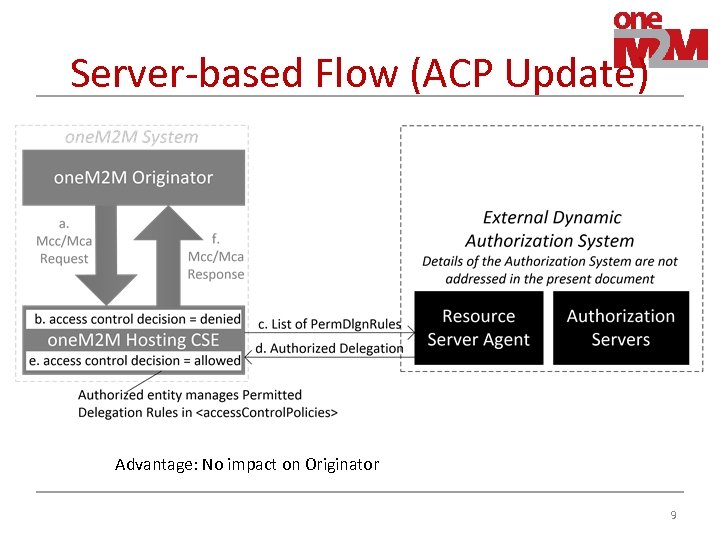 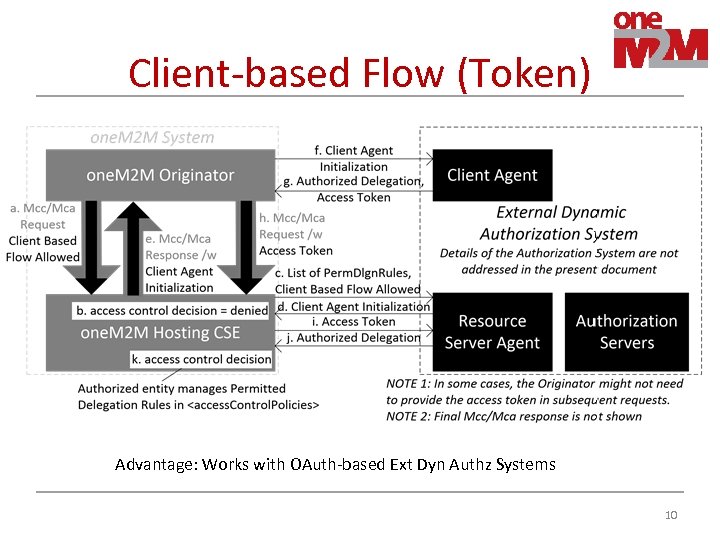 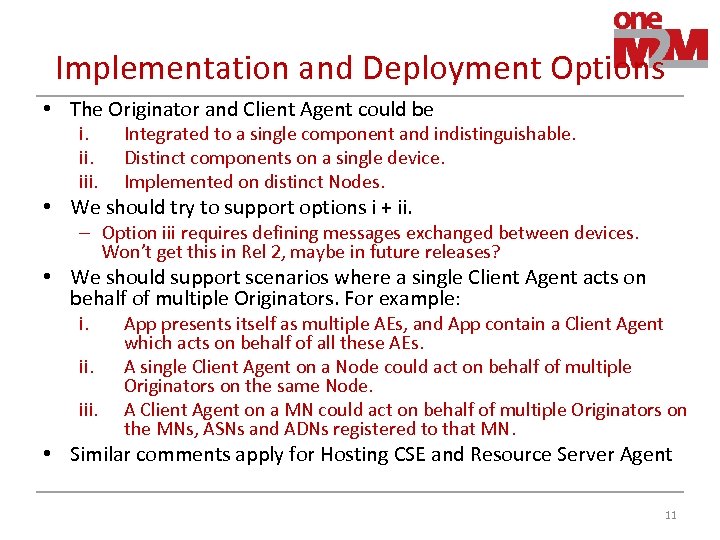 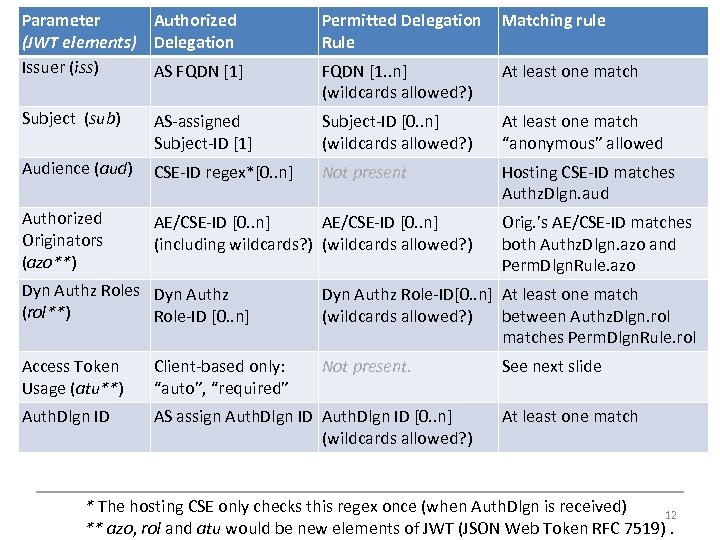 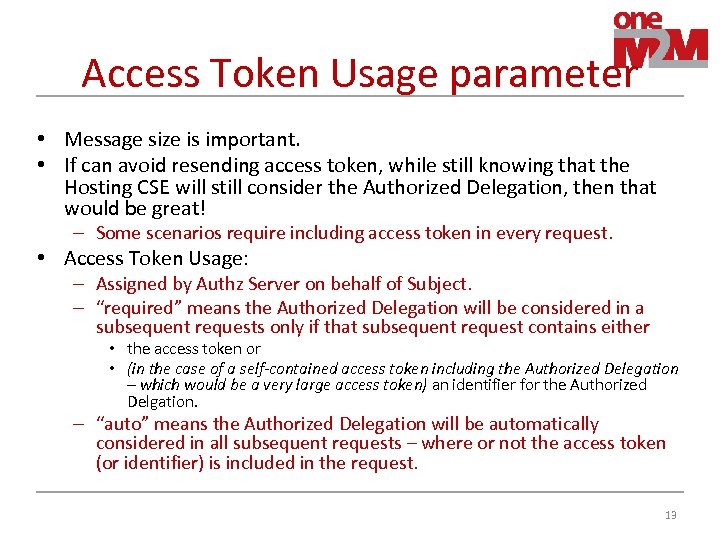 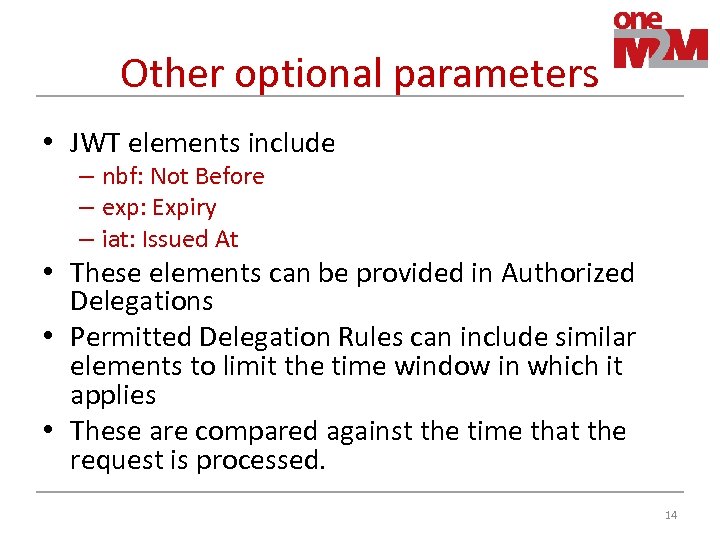 NEW NOTE • This proposal focusses on a approach where the Hosting CSE does not make decisions about dynamic authorization- the decisions are made elsewhere – e. g. At an Authorization Server • This is not the only valid approach – IDCC proposal DAA 4/SLDA supports the Hosting CSE making decisions – Such a system could work in parallel with our proposal, we are not opposed – In the author’s opinion, the present proposal minimizes standardization effect, and has most likelihood of making it into Rel 2. 3

Suggestion • Multiple Aspects to Dynamic Authorization 1. How is a delegation authorized? • Architecture: Entities, Messages, parameters • Protocol level details: Defining Policies 2. What parameters are exchanged over one. M 2 M msgs? 3. How is an delegation used in an access control decision? • Why don’t we A. Leave (1) completely out of scope. • Assume that an external Dynamic Authorization System (e. g. OAuth, UMA) provides this functionality. • Can always define a one. M 2 M-based Dyn Auth System in more detail (or profile an existing Dyn Auth System) at some time in the future. B. Focus on (2) and (3). 4

Suggestion (2) • Integrated with existing ACPs – Enhance ACPs to include rules which are compared against Authorized Delegations. – NOT alternative to ACPs. • Create a common framework providing Clientbased and Server-based dyn auth – Decisions made at an Authorization server • (Author’s opinion) This approach minimizes impact on – ARC WG work & changes to TS-0001 – SEC WG work & changes to TS-0003 5

NEW Out of Scope & In Scope • Interactions between Ext Dyn Authz System actors are out of scope • We want to standardize – Parameters exchanged between one. M 2 M system and Ext Dyn Authz System • Client Agent Originator • Resource Server Agent Hosting CSE – (Client-Based dyn auth) Hosting CSE and Originator to forward data between Client Agent and Resource Server Agent • Nature of the forwarded data is out of scope – Data object representing a delegation, processed by Hosting CSE – How delegation data object is used in access control decisions 7

Two new Data Objects • Authorized Delegation (Authz. Dlgn) – Outcome of the interaction with the Ext Dyn Authz System – Describes the authorization (in form of subject-managed roles) issued by an Authorization Server on behalf of a Subject (user, business, organization). • Can optionally identify one or more Originators • Authz. Dlgn can include expiry. • Permitted Delegation Rule (Perm. Dlgn. Rule) – (Optional) New parameters inside an access control rule. – A set of values (including wild cards) matched against corresponding parameter values of Authorized Delegation(s) and the request – When evaluating the access control rule for a particular request: • IF an Authorized Delegation matches a Permitted Delegation Rule, • THEN behave as if Originator’s identifier was in access. Control. Originators. • Further details on parameters in a few slides 8

Other optional parameters • JWT elements include – nbf: Not Before – exp: Expiry – iat: Issued At • These elements can be provided in Authorized Delegations • Permitted Delegation Rules can include similar elements to limit the time window in which it applies • These are compared against the time that the request is processed. 14