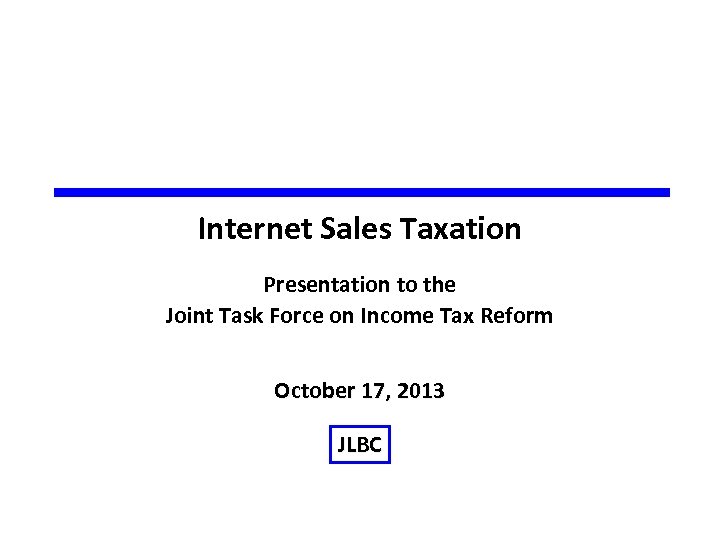 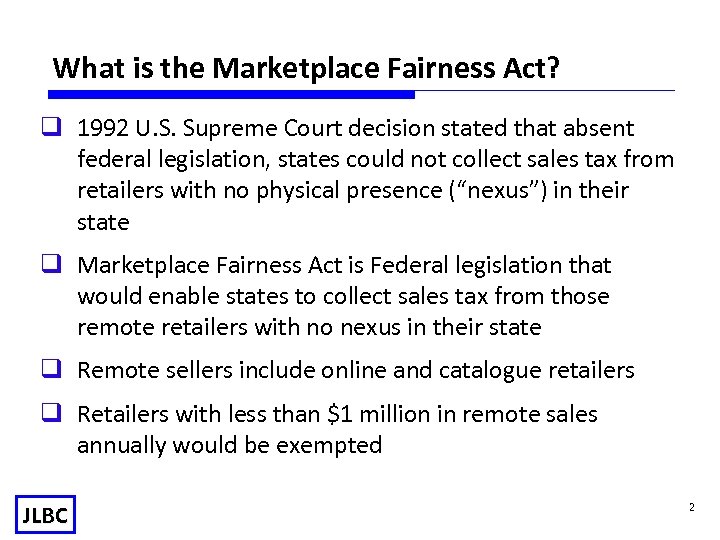 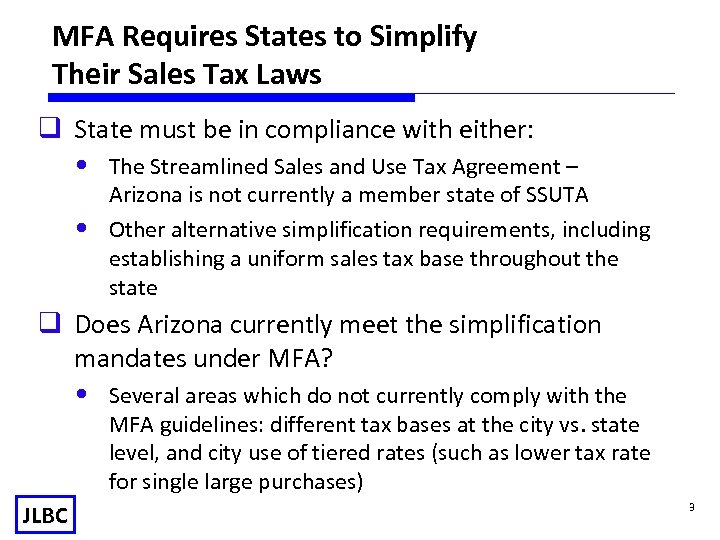 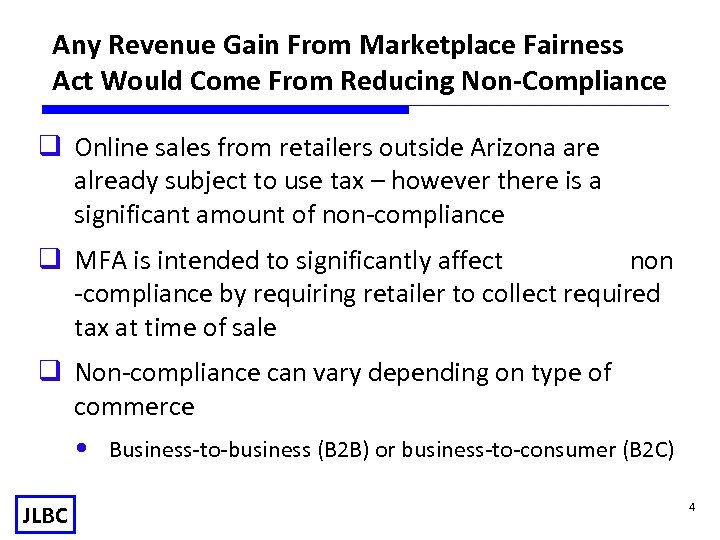 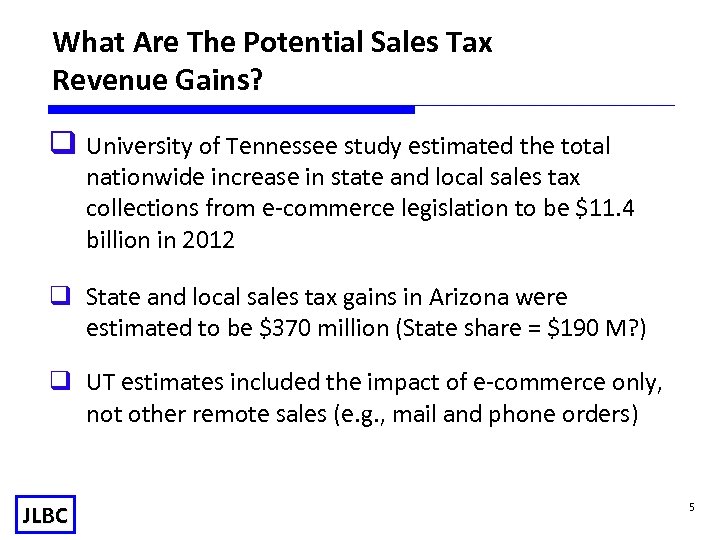 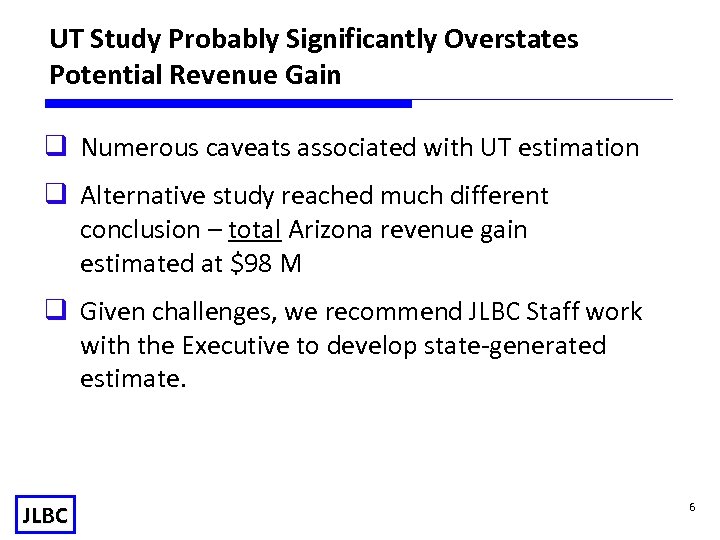 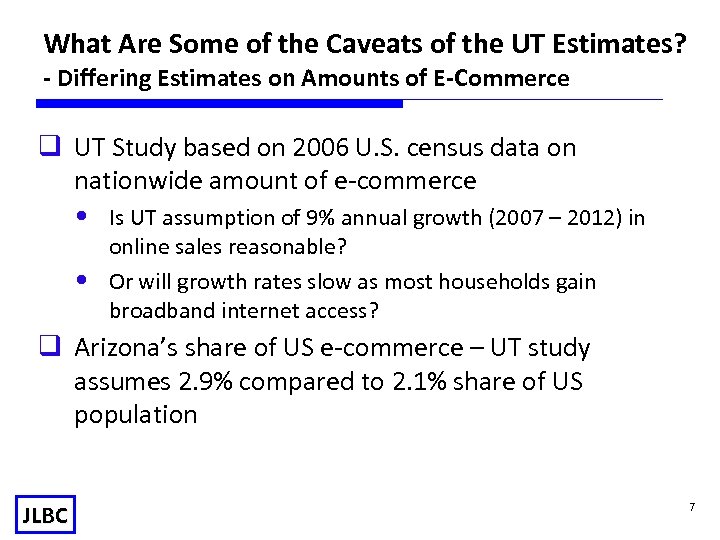 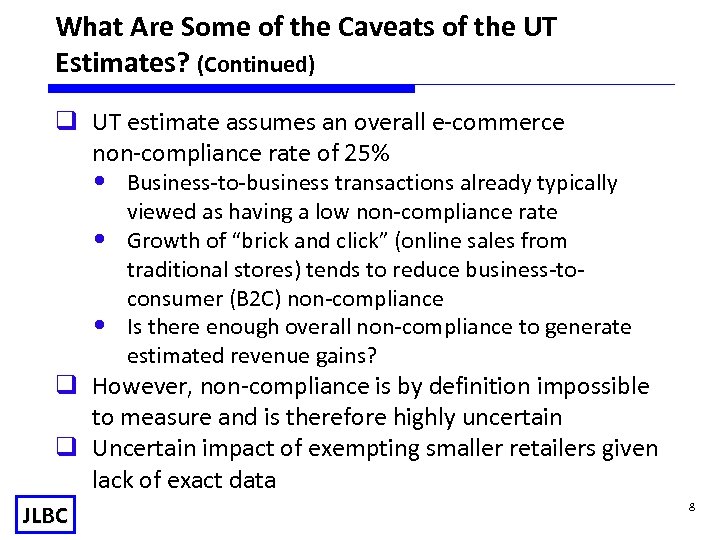 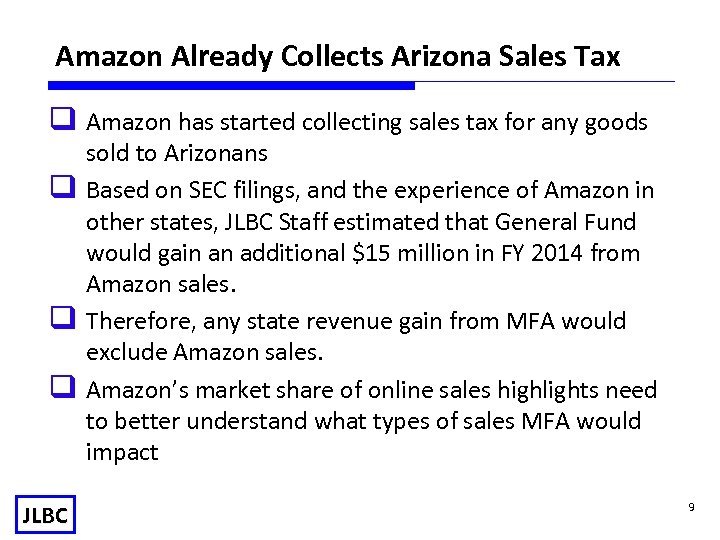 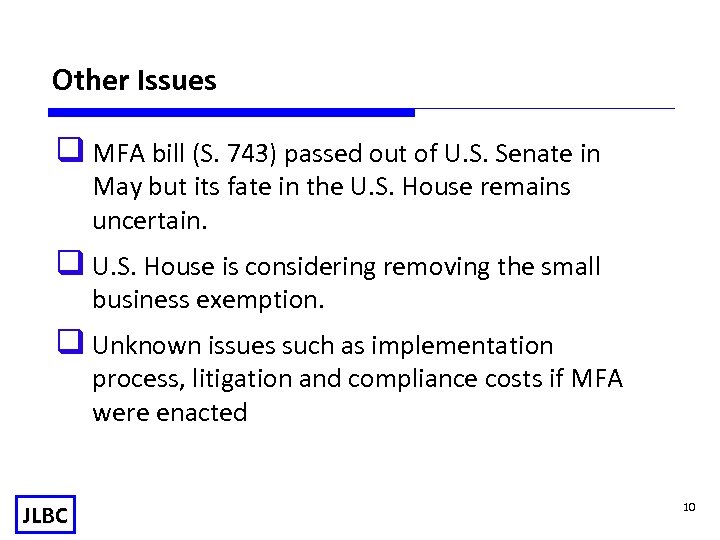 What is the Marketplace Fairness Act? q 1992 U. S. Supreme Court decision stated that absent federal legislation, states could not collect sales tax from retailers with no physical presence (“nexus”) in their state q Marketplace Fairness Act is Federal legislation that would enable states to collect sales tax from those remote retailers with no nexus in their state q Remote sellers include online and catalogue retailers q Retailers with less than $1 million in remote sales annually would be exempted JLBC 2

MFA Requires States to Simplify Their Sales Tax Laws q State must be in compliance with either: • The Streamlined Sales and Use Tax Agreement – • Arizona is not currently a member state of SSUTA Other alternative simplification requirements, including establishing a uniform sales tax base throughout the state q Does Arizona currently meet the simplification mandates under MFA? • Several areas which do not currently comply with the MFA guidelines: different tax bases at the city vs. state level, and city use of tiered rates (such as lower tax rate for single large purchases) JLBC 3

What Are The Potential Sales Tax Revenue Gains? q University of Tennessee study estimated the total nationwide increase in state and local sales tax collections from e-commerce legislation to be $11. 4 billion in 2012 q State and local sales tax gains in Arizona were estimated to be $370 million (State share = $190 M? ) q UT estimates included the impact of e-commerce only, not other remote sales (e. g. , mail and phone orders) JLBC 5

What Are Some of the Caveats of the UT Estimates? - Differing Estimates on Amounts of E-Commerce q UT Study based on 2006 U. S. census data on nationwide amount of e-commerce • Is UT assumption of 9% annual growth (2007 – 2012) in • online sales reasonable? Or will growth rates slow as most households gain broadband internet access? q Arizona’s share of US e-commerce – UT study assumes 2. 9% compared to 2. 1% share of US population JLBC 7

What Are Some of the Caveats of the UT Estimates? (Continued) q UT estimate assumes an overall e-commerce non-compliance rate of 25% • Business-to-business transactions already typically • • viewed as having a low non-compliance rate Growth of “brick and click” (online sales from traditional stores) tends to reduce business-toconsumer (B 2 C) non-compliance Is there enough overall non-compliance to generate estimated revenue gains? q However, non-compliance is by definition impossible to measure and is therefore highly uncertain q Uncertain impact of exempting smaller retailers given lack of exact data JLBC 8

Amazon Already Collects Arizona Sales Tax q Amazon has started collecting sales tax for any goods q q q JLBC sold to Arizonans Based on SEC filings, and the experience of Amazon in other states, JLBC Staff estimated that General Fund would gain an additional $15 million in FY 2014 from Amazon sales. Therefore, any state revenue gain from MFA would exclude Amazon sales. Amazon’s market share of online sales highlights need to better understand what types of sales MFA would impact 9

Other Issues q MFA bill (S. 743) passed out of U. S. Senate in May but its fate in the U. S. House remains uncertain. q U. S. House is considering removing the small business exemption. q Unknown issues such as implementation process, litigation and compliance costs if MFA were enacted JLBC 10