INTERESTING BIT OF HISTORY Who was Hayim Solomon 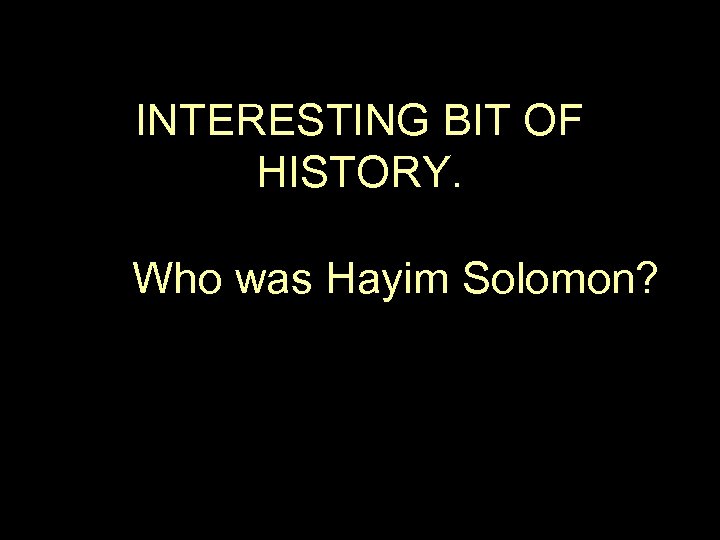 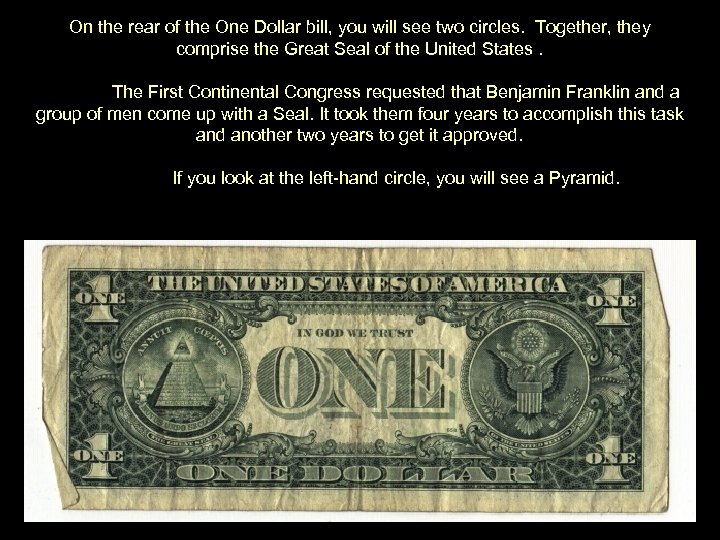 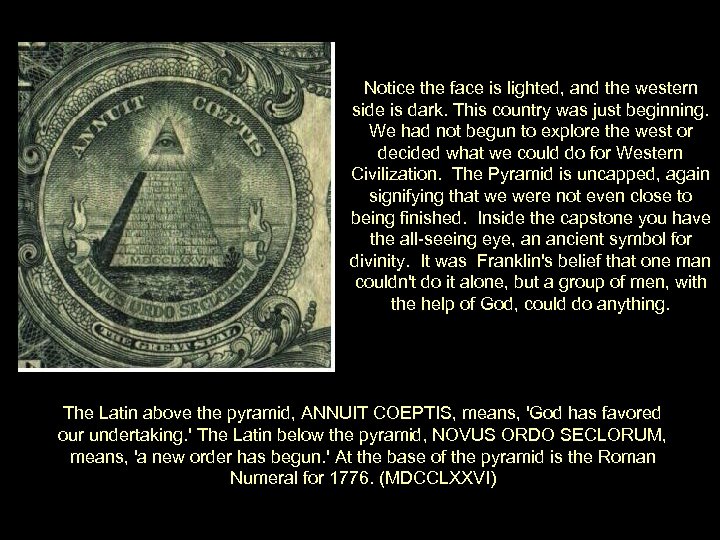 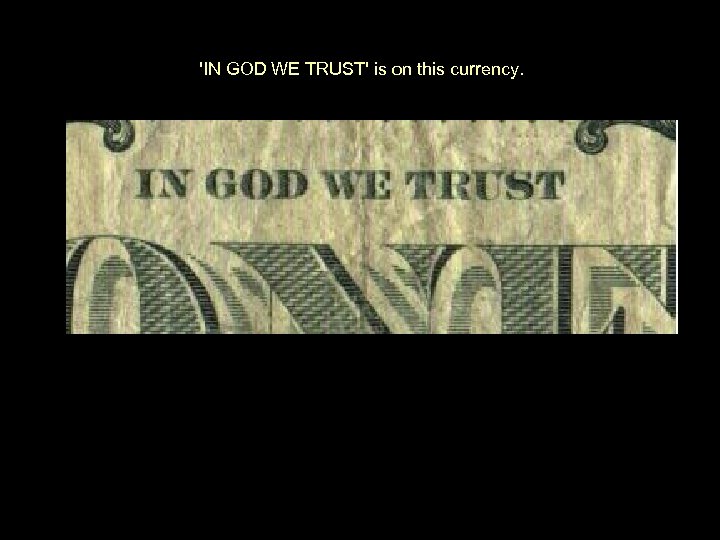 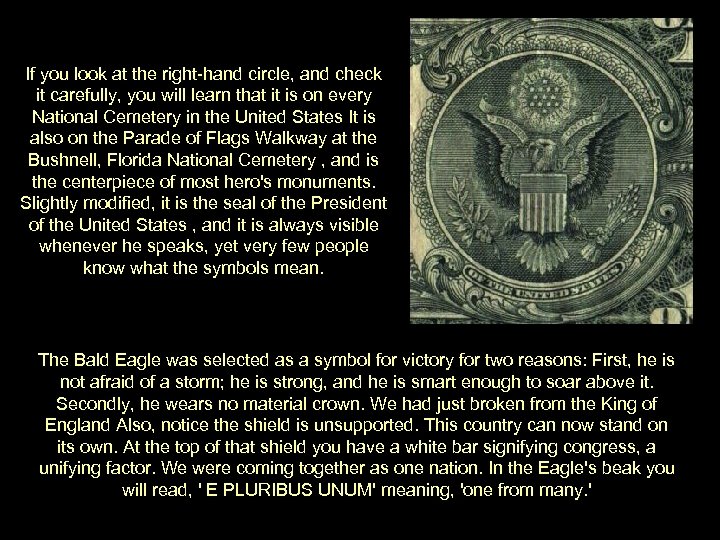 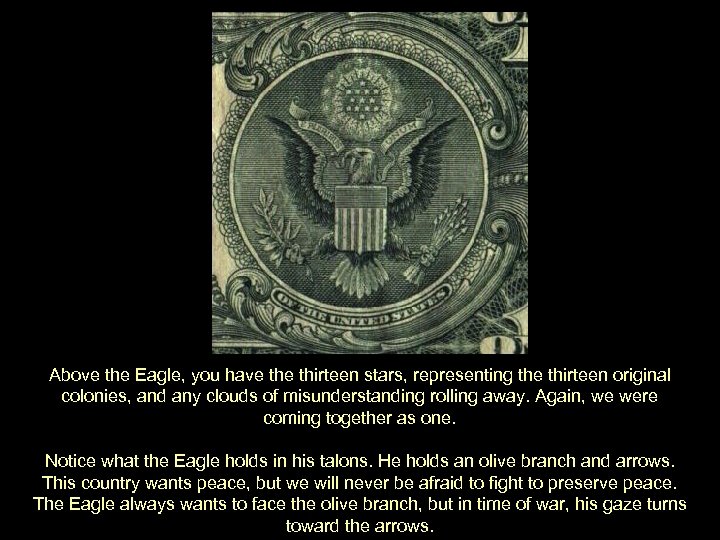 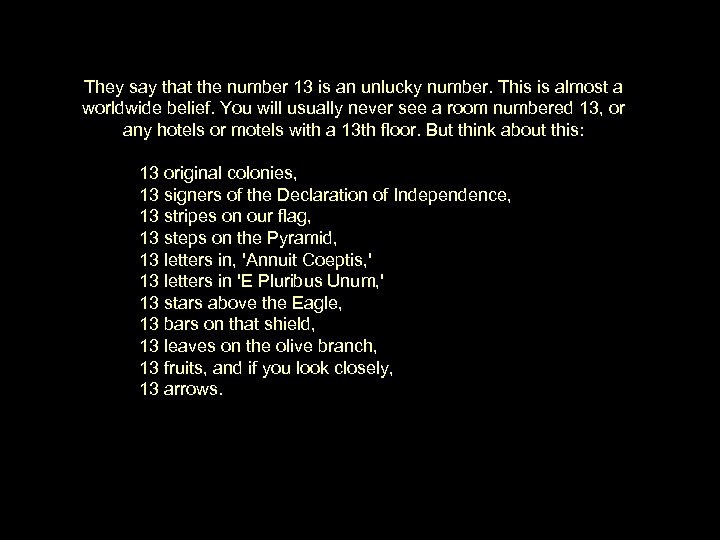 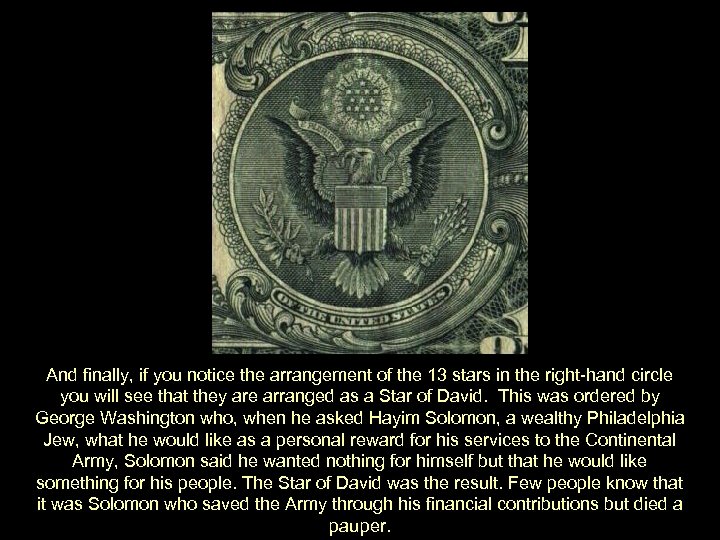 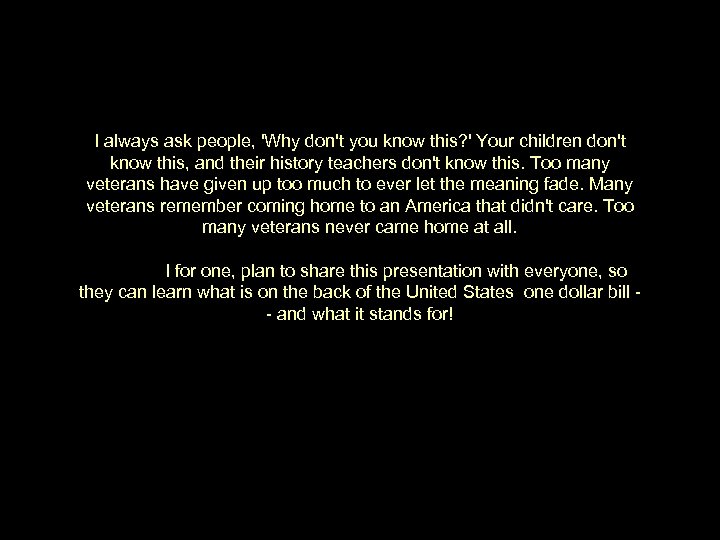 Скачать презентацию INTERESTING BIT OF HISTORY Who was Hayim Solomon

INTERESTING BIT OF HISTORY. Who was Hayim Solomon?

On the rear of the One Dollar bill, you will see two circles. Together, they comprise the Great Seal of the United States. The First Continental Congress requested that Benjamin Franklin and a group of men come up with a Seal. It took them four years to accomplish this task and another two years to get it approved. If you look at the left-hand circle, you will see a Pyramid.

Notice the face is lighted, and the western side is dark. This country was just beginning. We had not begun to explore the west or decided what we could do for Western Civilization. The Pyramid is uncapped, again signifying that we were not even close to being finished. Inside the capstone you have the all-seeing eye, an ancient symbol for divinity. It was Franklin's belief that one man couldn't do it alone, but a group of men, with the help of God, could do anything. The Latin above the pyramid, ANNUIT COEPTIS, means, 'God has favored our undertaking. ' The Latin below the pyramid, NOVUS ORDO SECLORUM, means, 'a new order has begun. ' At the base of the pyramid is the Roman Numeral for 1776. (MDCCLXXVI)

'IN GOD WE TRUST' is on this currency.

If you look at the right-hand circle, and check it carefully, you will learn that it is on every National Cemetery in the United States It is also on the Parade of Flags Walkway at the Bushnell, Florida National Cemetery , and is the centerpiece of most hero's monuments. Slightly modified, it is the seal of the President of the United States , and it is always visible whenever he speaks, yet very few people know what the symbols mean. The Bald Eagle was selected as a symbol for victory for two reasons: First, he is not afraid of a storm; he is strong, and he is smart enough to soar above it. Secondly, he wears no material crown. We had just broken from the King of England Also, notice the shield is unsupported. This country can now stand on its own. At the top of that shield you have a white bar signifying congress, a unifying factor. We were coming together as one nation. In the Eagle's beak you will read, ' E PLURIBUS UNUM' meaning, 'one from many. '

Above the Eagle, you have thirteen stars, representing the thirteen original colonies, and any clouds of misunderstanding rolling away. Again, we were coming together as one. Notice what the Eagle holds in his talons. He holds an olive branch and arrows. This country wants peace, but we will never be afraid to fight to preserve peace. The Eagle always wants to face the olive branch, but in time of war, his gaze turns toward the arrows.

They say that the number 13 is an unlucky number. This is almost a worldwide belief. You will usually never see a room numbered 13, or any hotels or motels with a 13 th floor. But think about this: 13 original colonies, 13 signers of the Declaration of Independence, 13 stripes on our flag, 13 steps on the Pyramid, 13 letters in, 'Annuit Coeptis, ' 13 letters in 'E Pluribus Unum, ' 13 stars above the Eagle, 13 bars on that shield, 13 leaves on the olive branch, 13 fruits, and if you look closely, 13 arrows.

And finally, if you notice the arrangement of the 13 stars in the right-hand circle you will see that they are arranged as a Star of David. This was ordered by George Washington who, when he asked Hayim Solomon, a wealthy Philadelphia Jew, what he would like as a personal reward for his services to the Continental Army, Solomon said he wanted nothing for himself but that he would like something for his people. The Star of David was the result. Few people know that it was Solomon who saved the Army through his financial contributions but died a pauper.

I always ask people, 'Why don't you know this? ' Your children don't know this, and their history teachers don't know this. Too many veterans have given up too much to ever let the meaning fade. Many veterans remember coming home to an America that didn't care. Too many veterans never came home at all. I for one, plan to share this presentation with everyone, so they can learn what is on the back of the United States one dollar bill - and what it stands for!