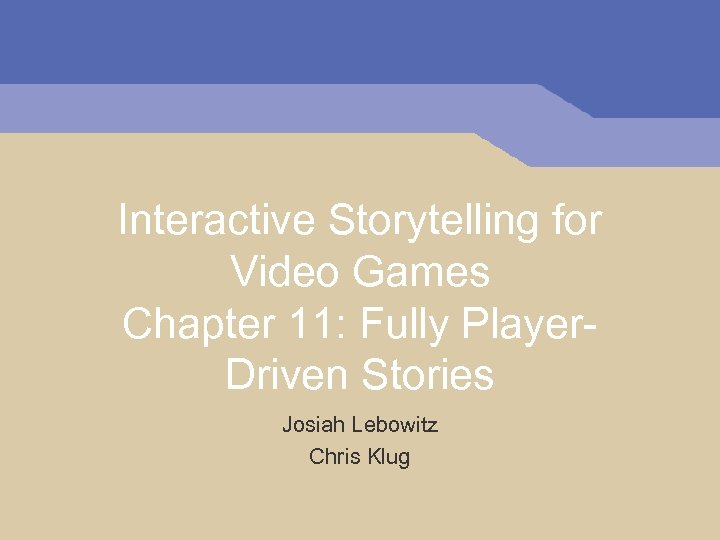 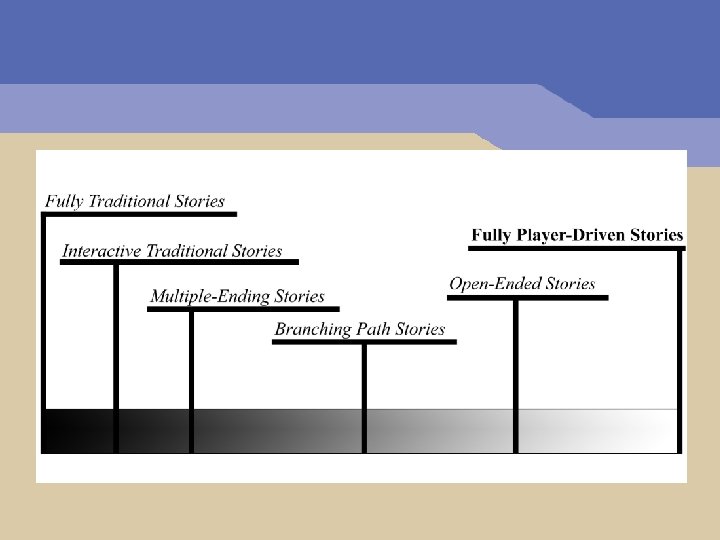 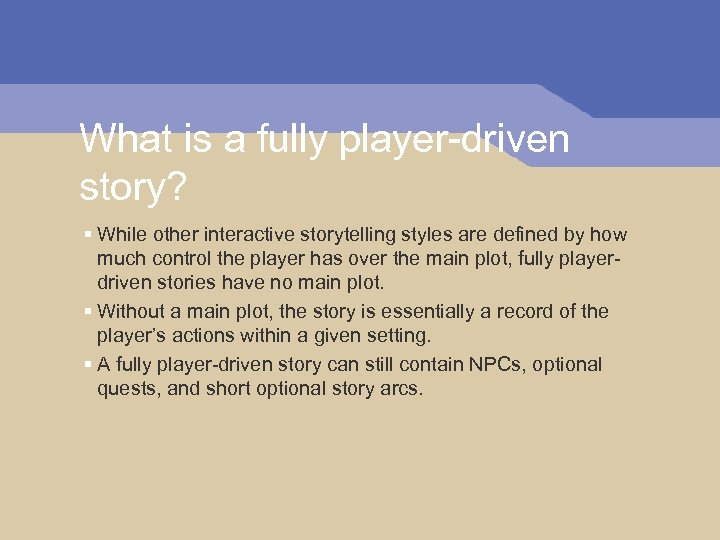 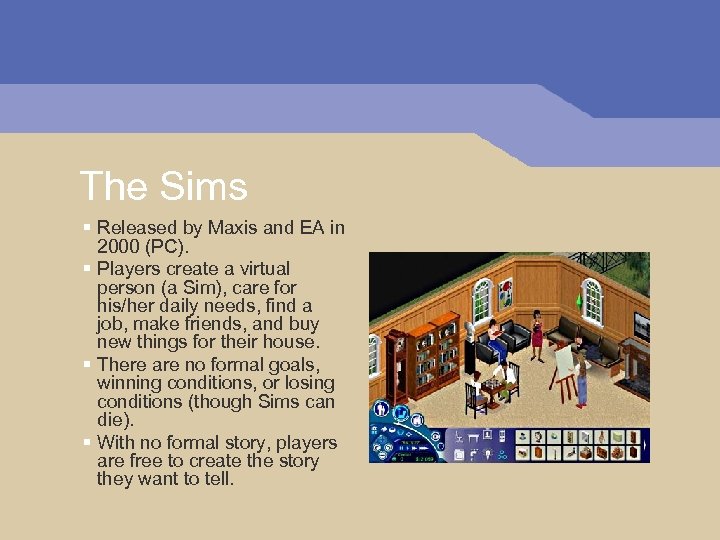 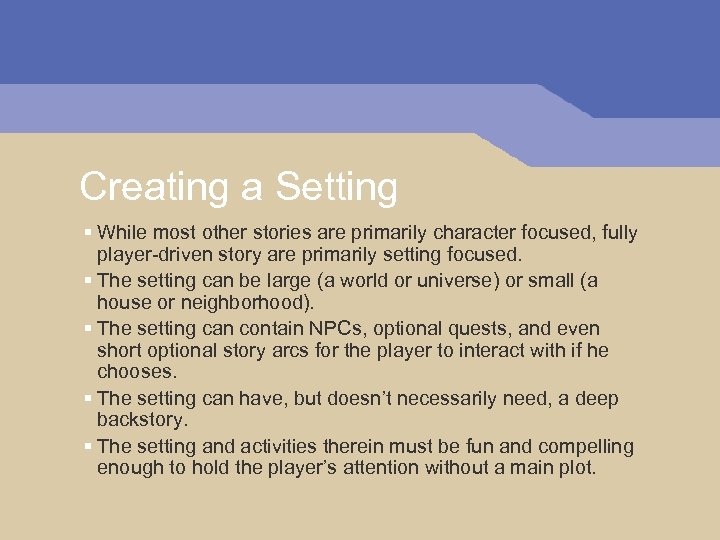 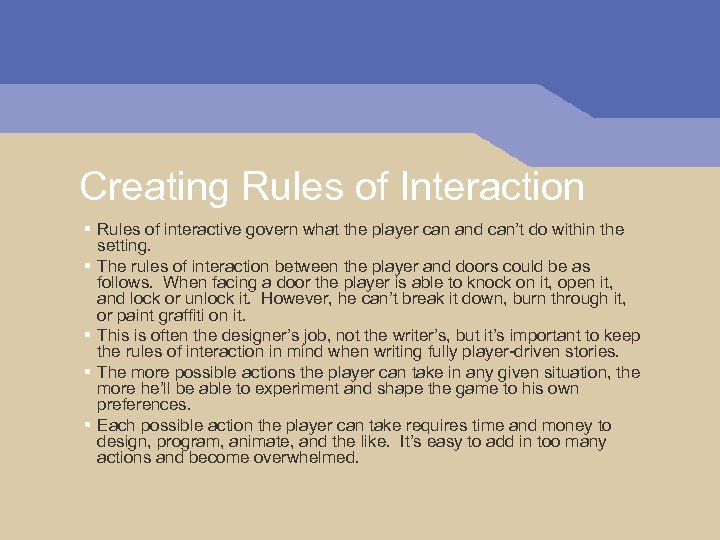 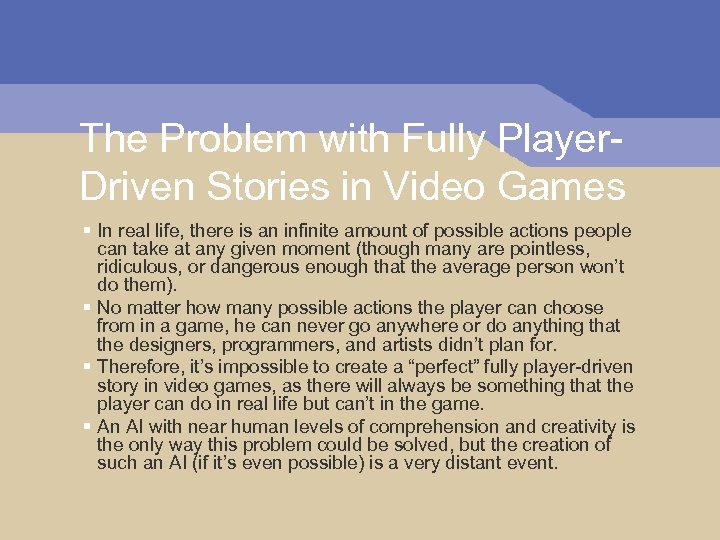 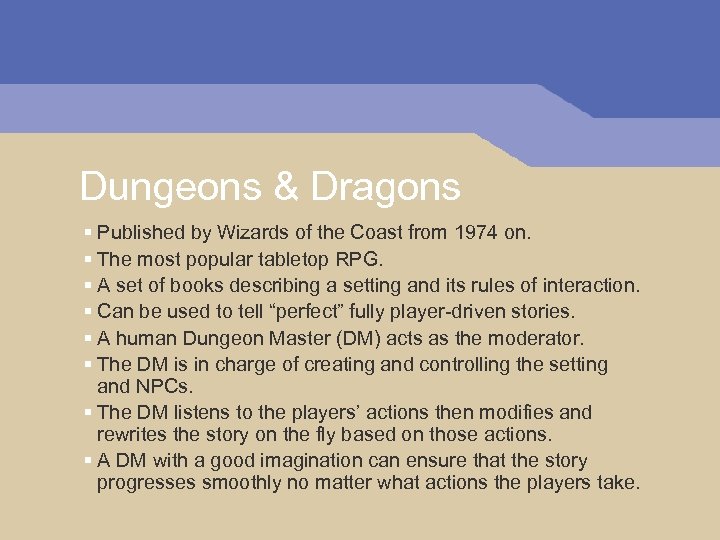 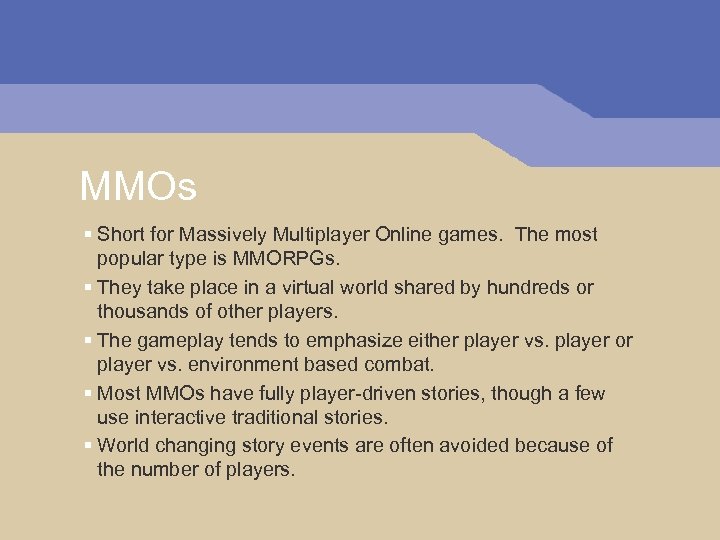 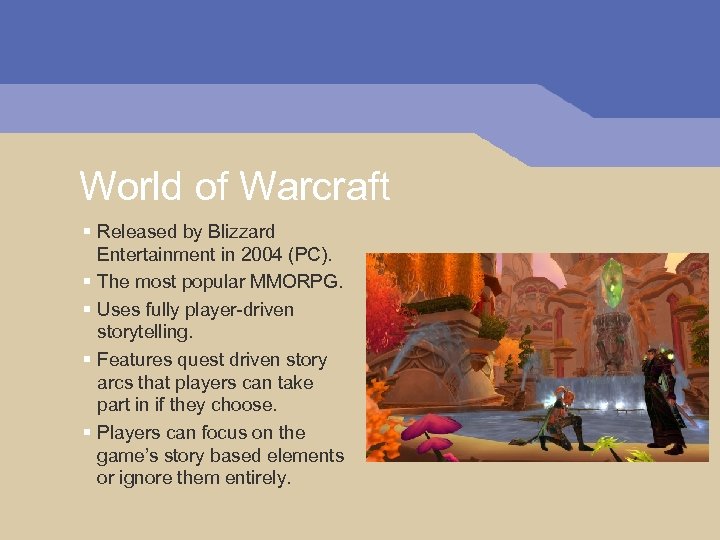 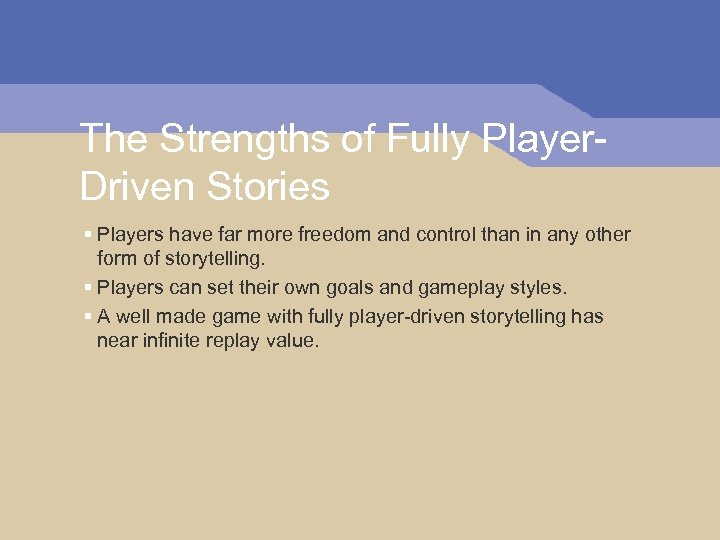 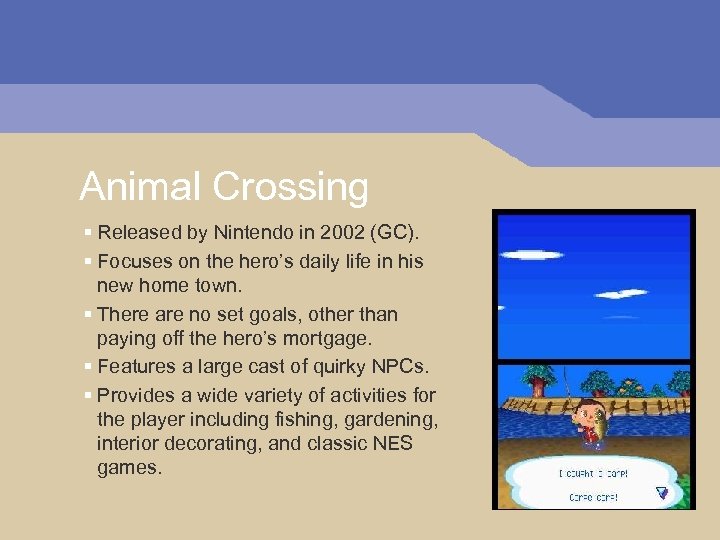 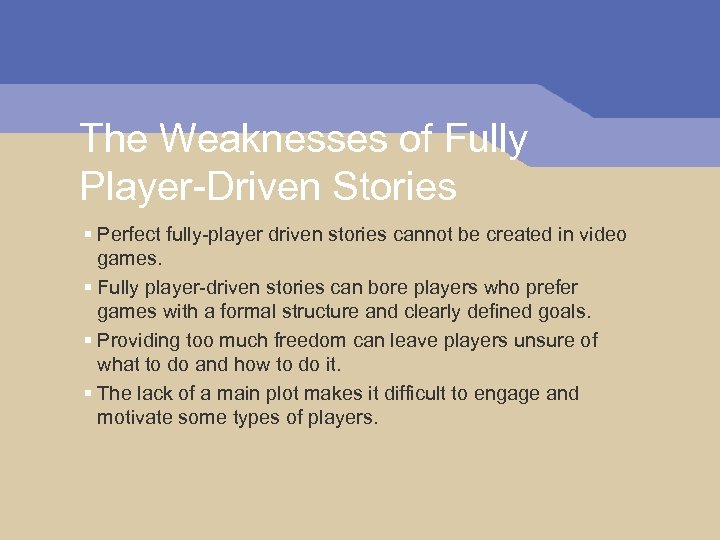 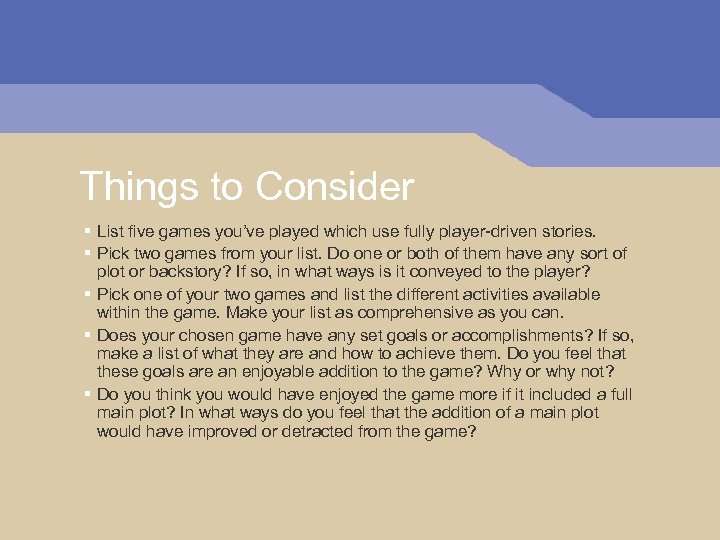 The Sims § Released by Maxis and EA in 2000 (PC). § Players create a virtual person (a Sim), care for his/her daily needs, find a job, make friends, and buy new things for their house. § There are no formal goals, winning conditions, or losing conditions (though Sims can die). § With no formal story, players are free to create the story they want to tell.

Creating Rules of Interaction § Rules of interactive govern what the player can and can’t do within the setting. § The rules of interaction between the player and doors could be as follows. When facing a door the player is able to knock on it, open it, and lock or unlock it. However, he can’t break it down, burn through it, or paint graffiti on it. § This is often the designer’s job, not the writer’s, but it’s important to keep the rules of interaction in mind when writing fully player-driven stories. § The more possible actions the player can take in any given situation, the more he’ll be able to experiment and shape the game to his own preferences. § Each possible action the player can take requires time and money to design, program, animate, and the like. It’s easy to add in too many actions and become overwhelmed.

The Problem with Fully Player. Driven Stories in Video Games § In real life, there is an infinite amount of possible actions people can take at any given moment (though many are pointless, ridiculous, or dangerous enough that the average person won’t do them). § No matter how many possible actions the player can choose from in a game, he can never go anywhere or do anything that the designers, programmers, and artists didn’t plan for. § Therefore, it’s impossible to create a “perfect” fully player-driven story in video games, as there will always be something that the player can do in real life but can’t in the game. § An AI with near human levels of comprehension and creativity is the only way this problem could be solved, but the creation of such an AI (if it’s even possible) is a very distant event.

Dungeons & Dragons § Published by Wizards of the Coast from 1974 on. § The most popular tabletop RPG. § A set of books describing a setting and its rules of interaction. § Can be used to tell “perfect” fully player-driven stories. § A human Dungeon Master (DM) acts as the moderator. § The DM is in charge of creating and controlling the setting and NPCs. § The DM listens to the players’ actions then modifies and rewrites the story on the fly based on those actions. § A DM with a good imagination can ensure that the story progresses smoothly no matter what actions the players take.

MMOs § Short for Massively Multiplayer Online games. The most popular type is MMORPGs. § They take place in a virtual world shared by hundreds or thousands of other players. § The gameplay tends to emphasize either player vs. player or player vs. environment based combat. § Most MMOs have fully player-driven stories, though a few use interactive traditional stories. § World changing story events are often avoided because of the number of players.

World of Warcraft § Released by Blizzard Entertainment in 2004 (PC). § The most popular MMORPG. § Uses fully player-driven storytelling. § Features quest driven story arcs that players can take part in if they choose. § Players can focus on the game’s story based elements or ignore them entirely.

The Strengths of Fully Player. Driven Stories § Players have far more freedom and control than in any other form of storytelling. § Players can set their own goals and gameplay styles. § A well made game with fully player-driven storytelling has near infinite replay value.

Animal Crossing § Released by Nintendo in 2002 (GC). § Focuses on the hero’s daily life in his new home town. § There are no set goals, other than paying off the hero’s mortgage. § Features a large cast of quirky NPCs. § Provides a wide variety of activities for the player including fishing, gardening, interior decorating, and classic NES games.

The Weaknesses of Fully Player-Driven Stories § Perfect fully-player driven stories cannot be created in video games. § Fully player-driven stories can bore players who prefer games with a formal structure and clearly defined goals. § Providing too much freedom can leave players unsure of what to do and how to do it. § The lack of a main plot makes it difficult to engage and motivate some types of players.

Things to Consider § List five games you’ve played which use fully player-driven stories. § Pick two games from your list. Do one or both of them have any sort of plot or backstory? If so, in what ways is it conveyed to the player? § Pick one of your two games and list the different activities available within the game. Make your list as comprehensive as you can. § Does your chosen game have any set goals or accomplishments? If so, make a list of what they are and how to achieve them. Do you feel that these goals are an enjoyable addition to the game? Why or why not? § Do you think you would have enjoyed the game more if it included a full main plot? In what ways do you feel that the addition of a main plot would have improved or detracted from the game?