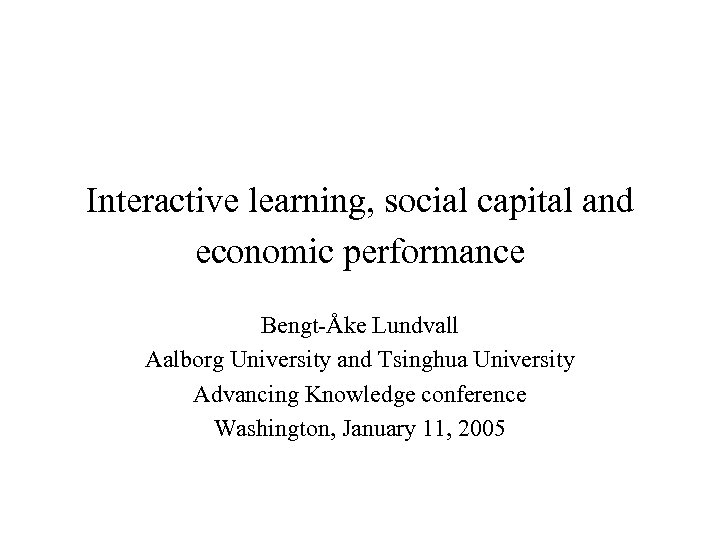 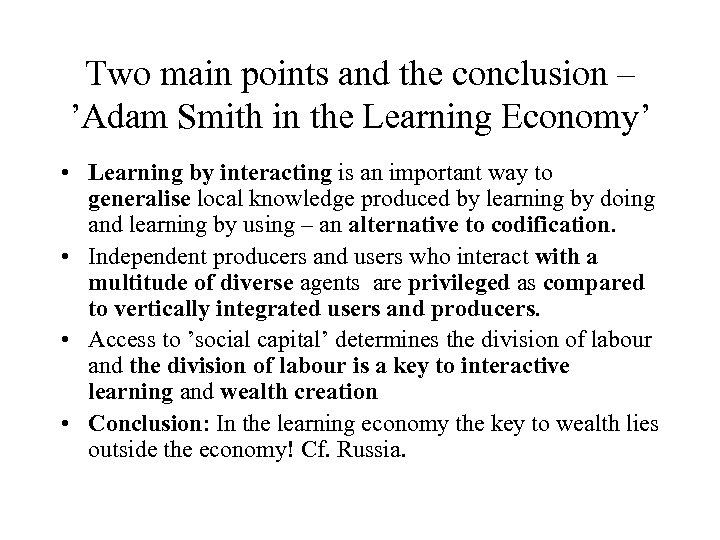 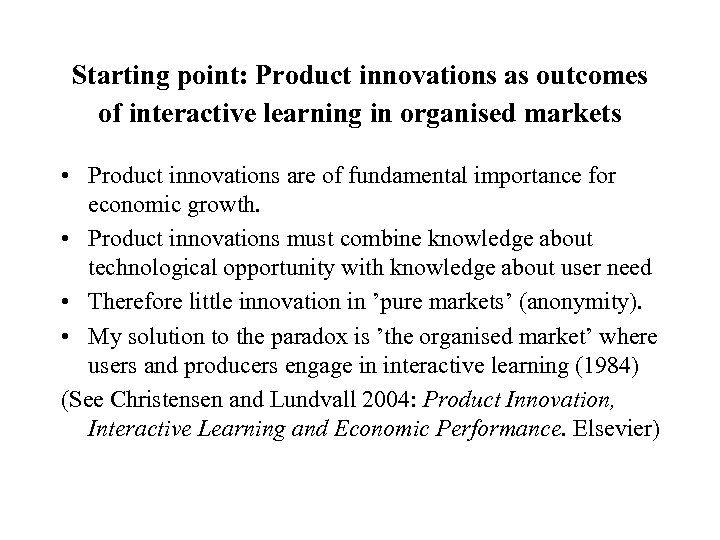 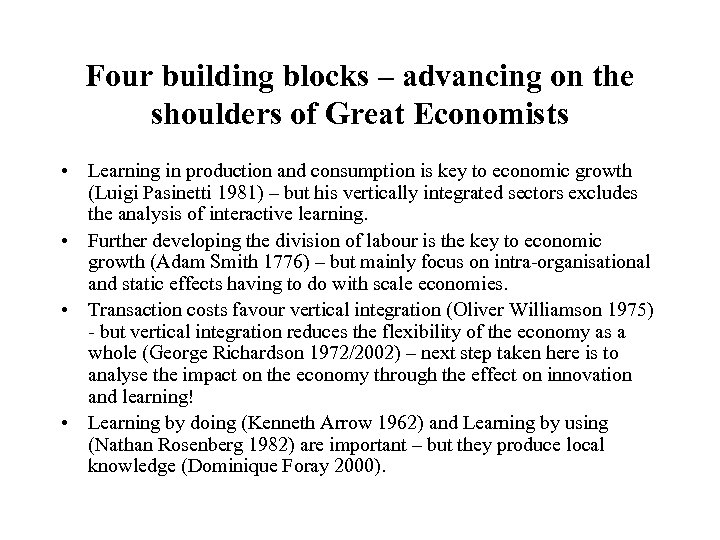 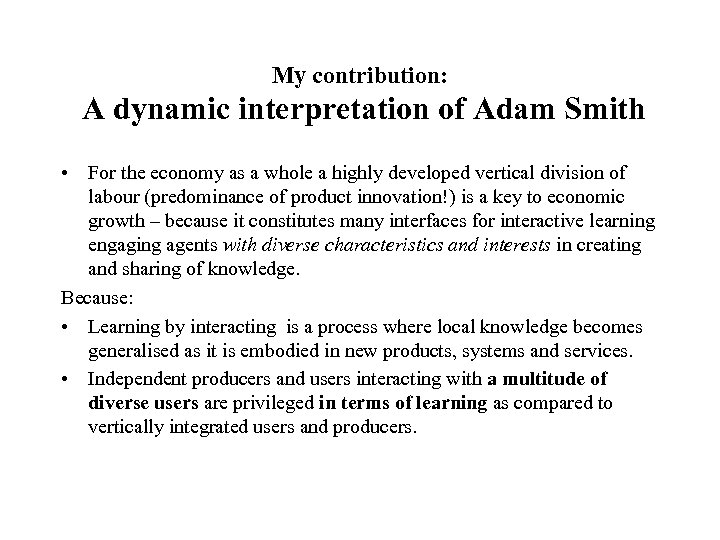 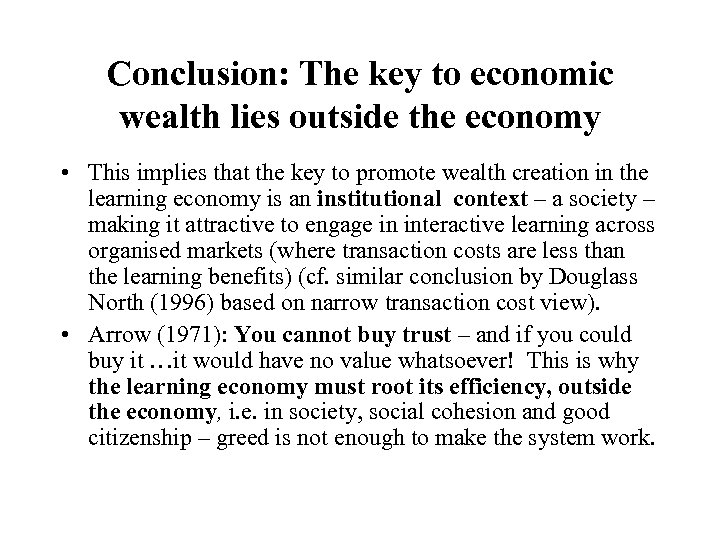 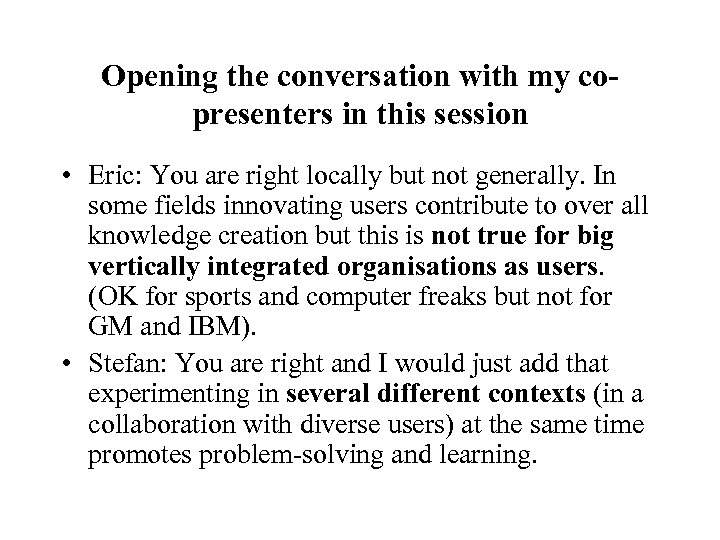 Two main points and the conclusion – ’Adam Smith in the Learning Economy’ • Learning by interacting is an important way to generalise local knowledge produced by learning by doing and learning by using – an alternative to codification. • Independent producers and users who interact with a multitude of diverse agents are privileged as compared to vertically integrated users and producers. • Access to ’social capital’ determines the division of labour and the division of labour is a key to interactive learning and wealth creation • Conclusion: In the learning economy the key to wealth lies outside the economy! Cf. Russia.

Four building blocks – advancing on the shoulders of Great Economists • Learning in production and consumption is key to economic growth (Luigi Pasinetti 1981) – but his vertically integrated sectors excludes the analysis of interactive learning. • Further developing the division of labour is the key to economic growth (Adam Smith 1776) – but mainly focus on intra-organisational and static effects having to do with scale economies. • Transaction costs favour vertical integration (Oliver Williamson 1975) - but vertical integration reduces the flexibility of the economy as a whole (George Richardson 1972/2002) – next step taken here is to analyse the impact on the economy through the effect on innovation and learning! • Learning by doing (Kenneth Arrow 1962) and Learning by using (Nathan Rosenberg 1982) are important – but they produce local knowledge (Dominique Foray 2000).

My contribution: A dynamic interpretation of Adam Smith • For the economy as a whole a highly developed vertical division of labour (predominance of product innovation!) is a key to economic growth – because it constitutes many interfaces for interactive learning engaging agents with diverse characteristics and interests in creating and sharing of knowledge. Because: • Learning by interacting is a process where local knowledge becomes generalised as it is embodied in new products, systems and services. • Independent producers and users interacting with a multitude of diverse users are privileged in terms of learning as compared to vertically integrated users and producers.

Conclusion: The key to economic wealth lies outside the economy • This implies that the key to promote wealth creation in the learning economy is an institutional context – a society – making it attractive to engage in interactive learning across organised markets (where transaction costs are less than the learning benefits) (cf. similar conclusion by Douglass North (1996) based on narrow transaction cost view). • Arrow (1971): You cannot buy trust – and if you could buy it …it would have no value whatsoever! This is why the learning economy must root its efficiency, outside the economy, i. e. in society, social cohesion and good citizenship – greed is not enough to make the system work.

Opening the conversation with my copresenters in this session • Eric: You are right locally but not generally. In some fields innovating users contribute to over all knowledge creation but this is not true for big vertically integrated organisations as users. (OK for sports and computer freaks but not for GM and IBM). • Stefan: You are right and I would just add that experimenting in several different contexts (in a collaboration with diverse users) at the same time promotes problem-solving and learning.