INFORMATION Only men could be in the 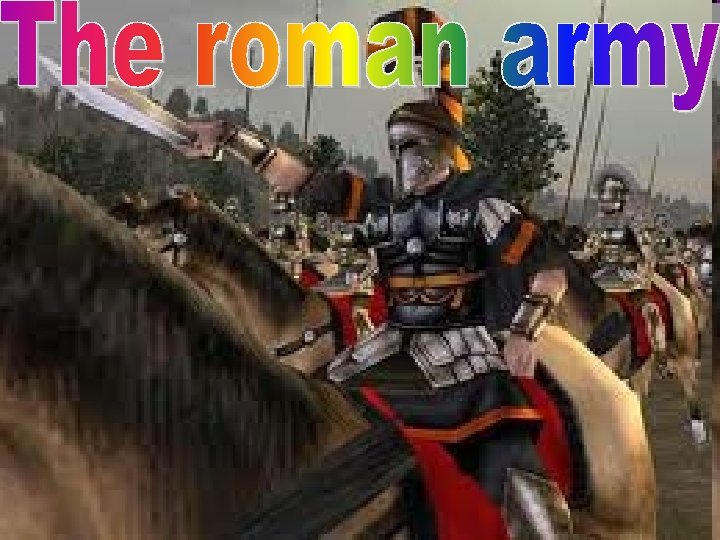 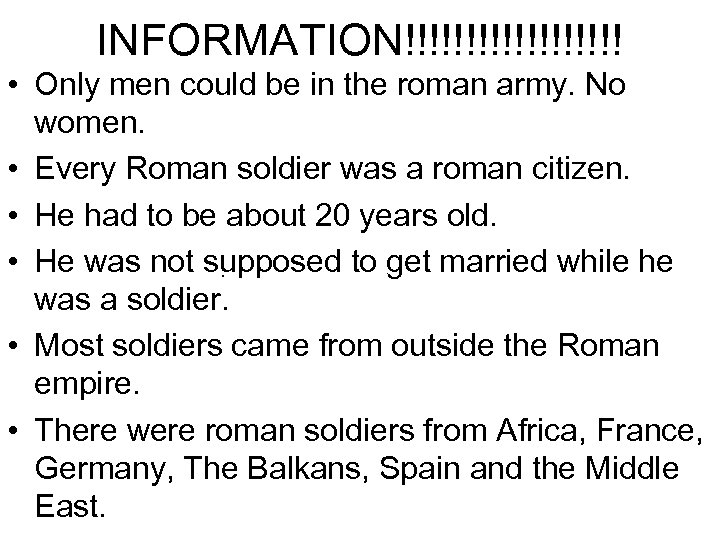 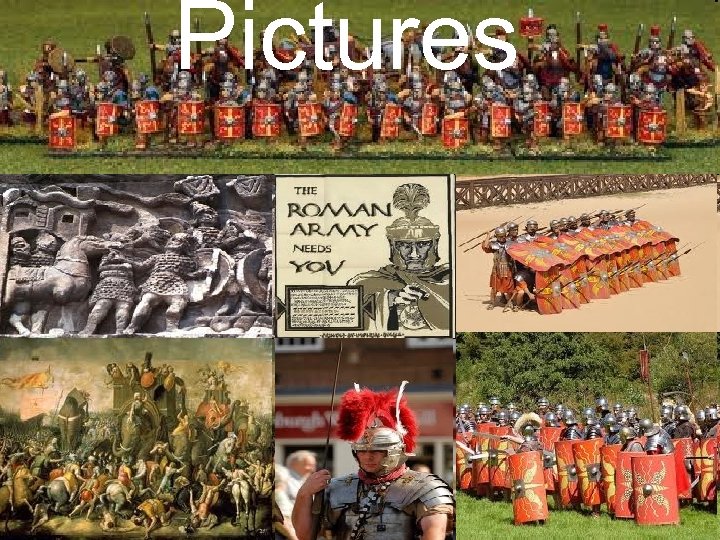 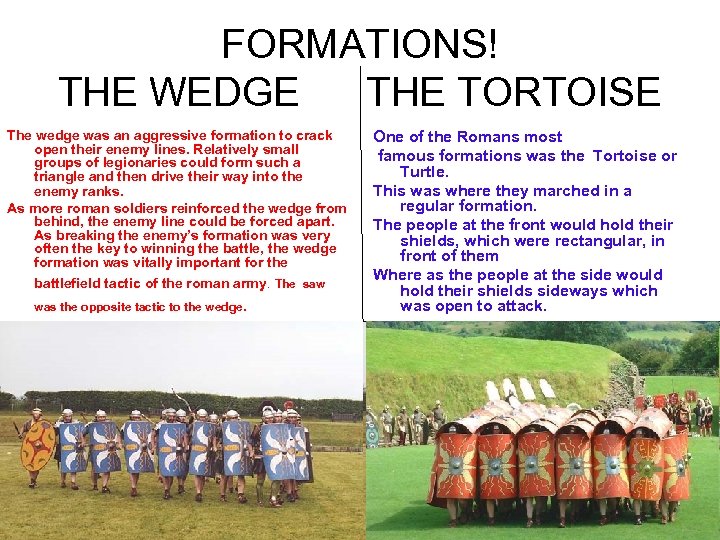 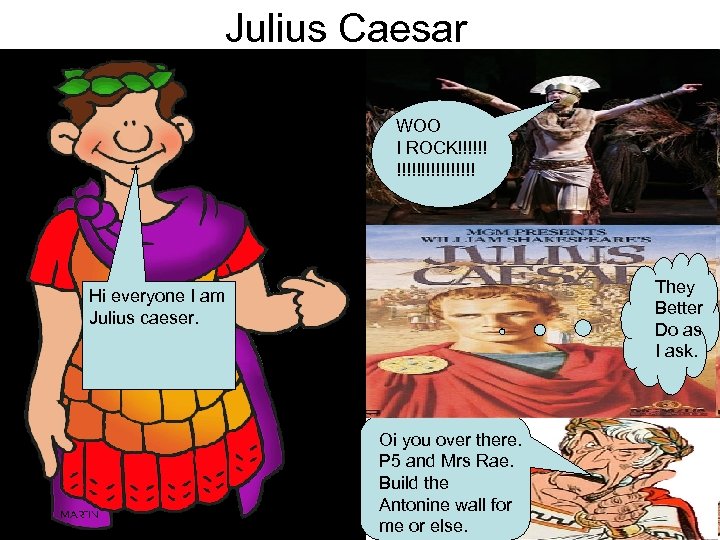 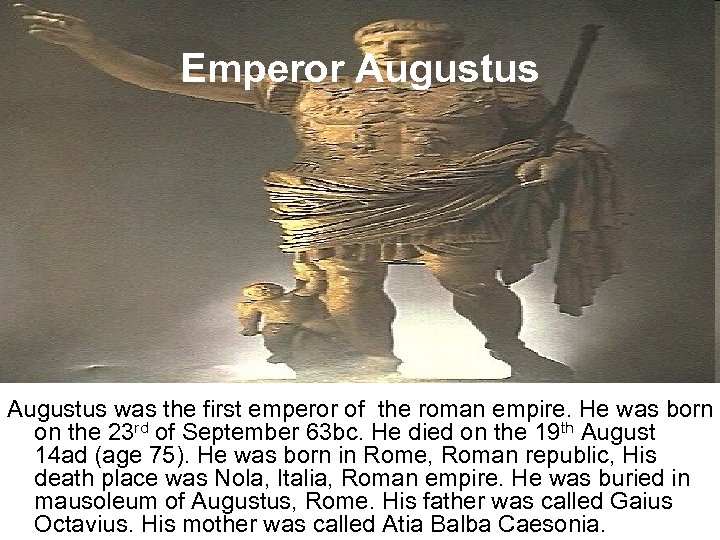 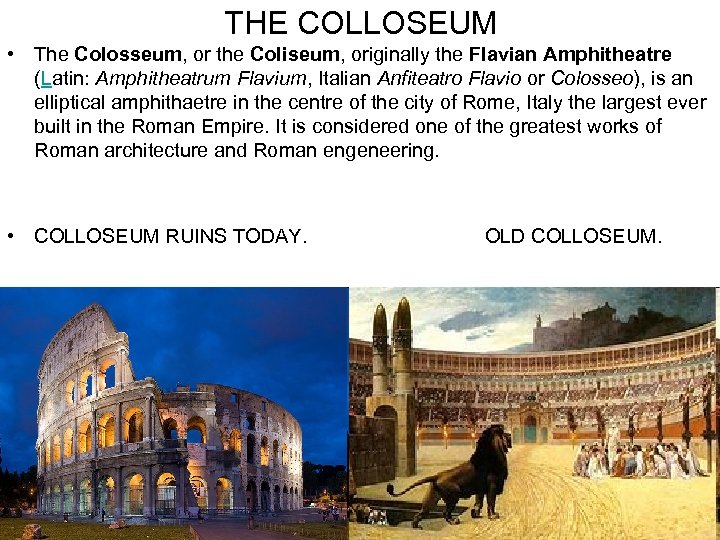 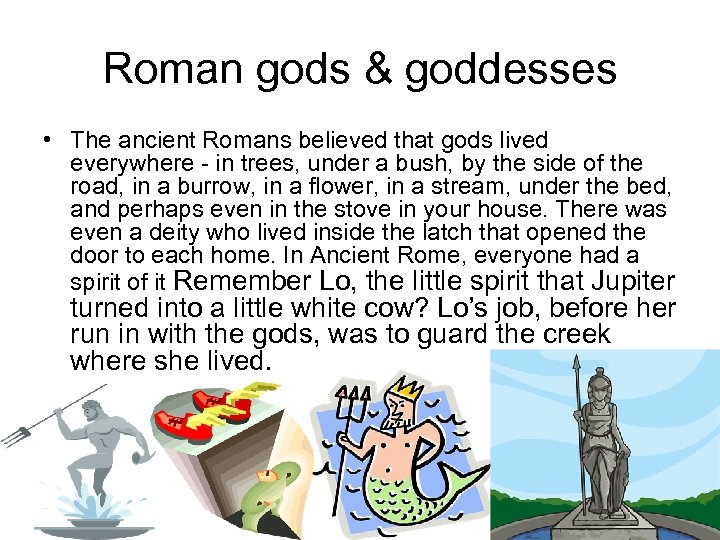 Скачать презентацию INFORMATION Only men could be in the

INFORMATION!!!!!!!!! • Only men could be in the roman army. No women. • Every Roman soldier was a roman citizen. • He had to be about 20 years old. • He was not supposed to get married while he . was a soldier. • Most soldiers came from outside the Roman empire. • There were roman soldiers from Africa, France, Germany, The Balkans, Spain and the Middle East.

FORMATIONS! THE WEDGE THE TORTOISE The wedge was an aggressive formation to crack open their enemy lines. Relatively small groups of legionaries could form such a triangle and then drive their way into the enemy ranks. As more roman soldiers reinforced the wedge from behind, the enemy line could be forced apart. As breaking the enemy’s formation was very often the key to winning the battle, the wedge formation was vitally important for the battlefield tactic of the roman army. The saw was the opposite tactic to the wedge. One of the Romans most famous formations was the Tortoise or Turtle. This was where they marched in a regular formation. The people at the front would hold their shields, which were rectangular, in front of them Where as the people at the side would hold their shields sideways which was open to attack.

Julius Caesar WOO I ROCK!!!!!!!! They Better Do as I ask. Hi everyone I am Julius caeser. Oi you over there. P 5 and Mrs Rae. Build the Antonine wall for me or else.

THE COLLOSEUM • The Colosseum, or the Coliseum, originally the Flavian Amphitheatre (Latin: Amphitheatrum Flavium, Italian Anfiteatro Flavio or Colosseo), is an elliptical amphithaetre in the centre of the city of Rome, Italy the largest ever built in the Roman Empire. It is considered one of the greatest works of Roman architecture and Roman engeneering. • COLLOSEUM RUINS TODAY. OLD COLLOSEUM.

Roman gods & goddesses • The ancient Romans believed that gods lived everywhere - in trees, under a bush, by the side of the road, in a burrow, in a flower, in a stream, under the bed, and perhaps even in the stove in your house. There was even a deity who lived inside the latch that opened the door to each home. In Ancient Rome, everyone had a spirit of it Remember Lo, the little spirit that Jupiter turned into a little white cow? Lo’s job, before her run in with the gods, was to guard the creek where she lived.