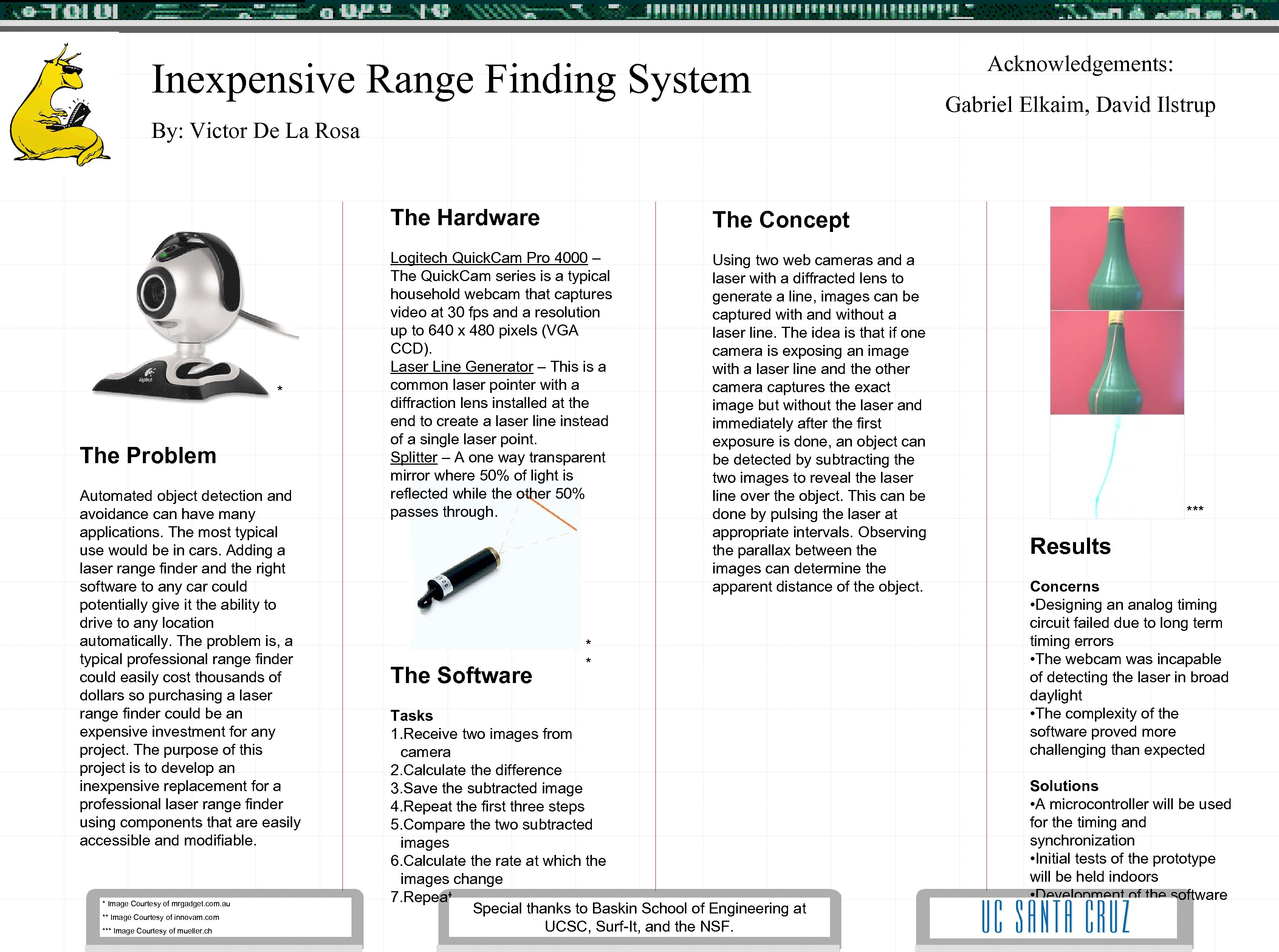 Inexpensive Range Finding System Acknowledgements: Gabriel Elkaim, David Ilstrup By: Victor De La Rosa The Hardware * The Problem Automated object detection and avoidance can have many applications. The most typical use would be in cars. Adding a laser range finder and the right software to any car could potentially give it the ability to drive to any location automatically. The problem is, a typical professional range finder could easily cost thousands of dollars so purchasing a laser range finder could be an expensive investment for any project. The purpose of this project is to develop an inexpensive replacement for a professional laser range finder using components that are easily accessible and modifiable. * Image Courtesy of mrgadget. com. au ** Image Courtesy of innovam. com *** Image Courtesy of mueller. ch The Concept Logitech Quick. Cam Pro 4000 – The Quick. Cam series is a typical household webcam that captures video at 30 fps and a resolution up to 640 x 480 pixels (VGA CCD). Laser Line Generator – This is a common laser pointer with a diffraction lens installed at the end to create a laser line instead of a single laser point. Splitter – A one way transparent mirror where 50% of light is reflected while the other 50% passes through. Using two web cameras and a laser with a diffracted lens to generate a line, images can be captured with and without a laser line. The idea is that if one camera is exposing an image with a laser line and the other camera captures the exact image but without the laser and immediately after the first exposure is done, an object can be detected by subtracting the two images to reveal the laser line over the object. This can be done by pulsing the laser at appropriate intervals. Observing the parallax between the images can determine the apparent distance of the object. The Software * * Tasks 1. Receive two images from camera 2. Calculate the difference 3. Save the subtracted image 4. Repeat the first three steps 5. Compare the two subtracted images 6. Calculate the rate at which the images change 7. Repeat Special thanks to Baskin School of Engineering at UCSC, Surf-It, and the NSF. *** Results Concerns • Designing an analog timing circuit failed due to long term timing errors • The webcam was incapable of detecting the laser in broad daylight • The complexity of the software proved more challenging than expected Solutions • A microcontroller will be used for the timing and synchronization • Initial tests of the prototype will be held indoors • Development of the software will continue.

Human Body Systems You Can’t Have One Without