In vitro activity of candidate microbicides against cell-associated 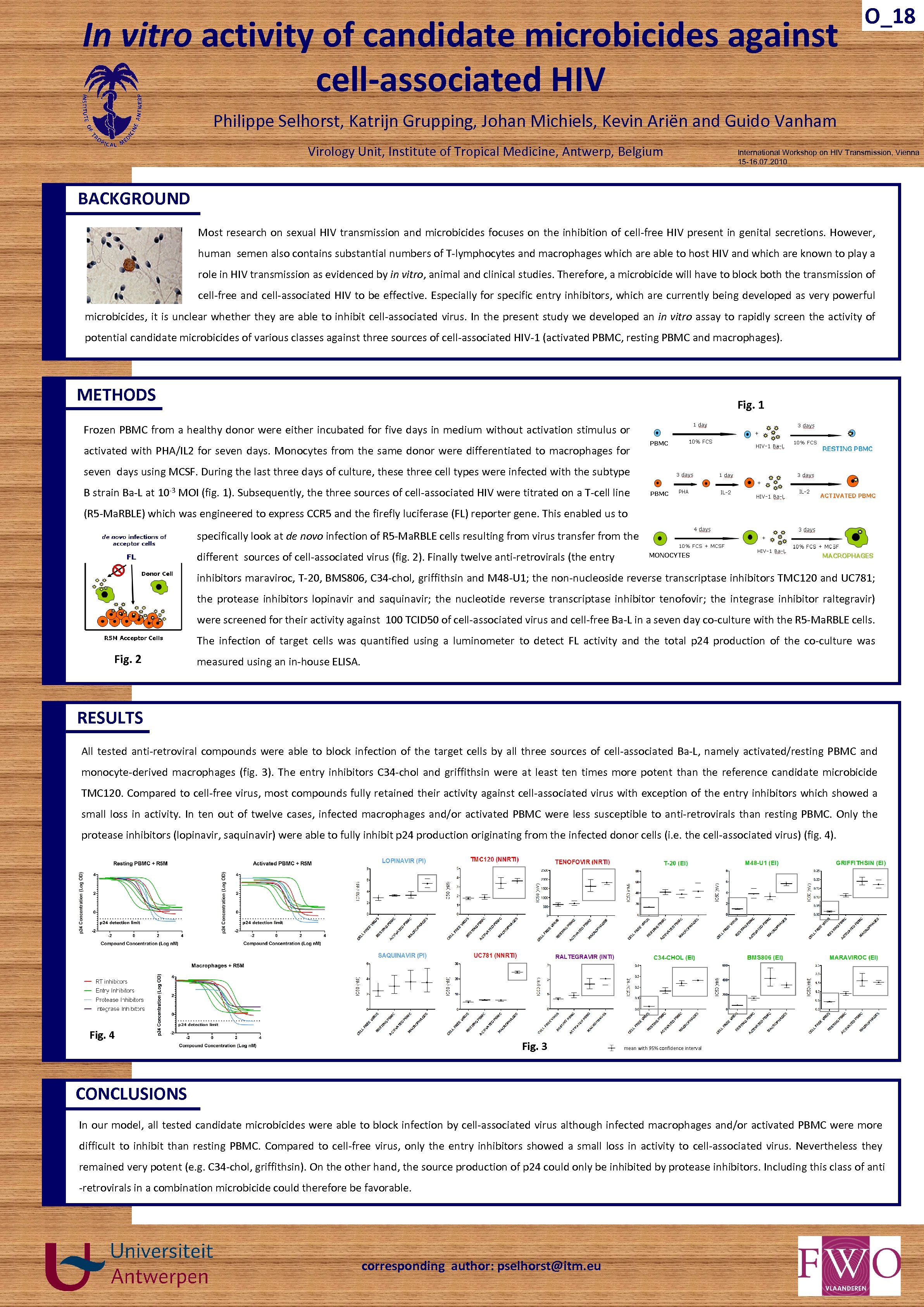 Скачать презентацию In vitro activity of candidate microbicides against cell-associated

In vitro activity of candidate microbicides against cell-associated HIV O_18 Philippe Selhorst, Katrijn Grupping, Johan Michiels, Kevin Ariën and Guido Vanham Virology Unit, Institute of Tropical Medicine, Antwerp, Belgium International Workshop on HIV Transmission, Vienna 15 -16. 07. 2010 BACKGROUND Most research on sexual HIV transmission and microbicides focuses on the inhibition of cell-free HIV present in genital secretions. However, human semen also contains substantial numbers of T-lymphocytes and macrophages which are able to host HIV and which are known to play a role in HIV transmission as evidenced by in vitro, animal and clinical studies. Therefore, a microbicide will have to block both the transmission of cell-free and cell-associated HIV to be effective. Especially for specific entry inhibitors, which are currently being developed as very powerful ; b; bb; hk microbicides, it is unclear whether they are able to inhibit cell-associated virus. In the present study we developed an in vitro assay to rapidly screen the activity of potential candidate microbicides of various classes against three sources of cell-associated HIV-1 (activated PBMC, resting PBMC and macrophages). METHODS Fig. 1 Frozen PBMC from a healthy donor were either incubated for five days in medium without activation stimulus or activated with PHA/IL 2 for seven days. Monocytes from the same donor were differentiated to macrophages for seven days using MCSF. During the last three days of culture, these three cell types were infected with the subtype B strain Ba-L at 10 -3 MOI (fig. 1). Subsequently, the three sources of cell-associated HIV were titrated on a T-cell line (R 5 -Ma. RBLE) which was engineered to express CCR 5 and the firefly luciferase (FL) reporter gene. This enabled us to specifically look at de novo infection of R 5 -Ma. RBLE cells resulting from virus transfer from the different sources of cell-associated virus (fig. 2). Finally twelve anti-retrovirals (the entry inhibitors maraviroc, T-20, BMS 806, C 34 -chol, griffithsin and M 48 -U 1; the non-nucleoside reverse transcriptase inhibitors TMC 120 and UC 781; the protease inhibitors lopinavir and saquinavir; the nucleotide reverse transcriptase inhibitor tenofovir; the integrase inhibitor raltegravir) were screened for their activity against 100 TCID 50 of cell-associated virus and cell-free Ba-L in a seven day co-culture with the R 5 -Ma. RBLE cells. The infection of target cells was quantified using a luminometer to detect FL activity and the total p 24 production of the co-culture was Fig. 2 measured using an in-house ELISA. RESULTS All tested anti-retroviral compounds were able to block infection of the target cells by all three sources of cell-associated Ba-L, namely activated/resting PBMC and monocyte-derived macrophages (fig. 3). The entry inhibitors C 34 -chol and griffithsin were at least ten times more potent than the reference candidate microbicide TMC 120. Compared to cell-free virus, most compounds fully retained their activity against cell-associated virus with exception of the entry inhibitors which showed a small loss in activity. In ten out of twelve cases, infected macrophages and/or activated PBMC were less susceptible to anti-retrovirals than resting PBMC. Only the protease inhibitors (lopinavir, saquinavir) were able to fully inhibit p 24 production originating from the infected donor cells (i. e. the cell-associated virus) (fig. 4). Fig. 4 Fig. 3 mean with 95% confidence interval CONCLUSIONS In our model, all tested candidate microbicides were able to block infection by cell-associated virus although infected macrophages and/or activated PBMC were more difficult to inhibit than resting PBMC. Compared to cell-free virus, only the entry inhibitors showed a small loss in activity to cell-associated virus. Nevertheless they remained very potent (e. g. C 34 -chol, griffithsin). On the other hand, the source production of p 24 could only be inhibited by protease inhibitors. Including this class of anti -retrovirals in a combination microbicide could therefore be favorable. corresponding author: [email protected] eu