In the news l l Mukasey confirmed by 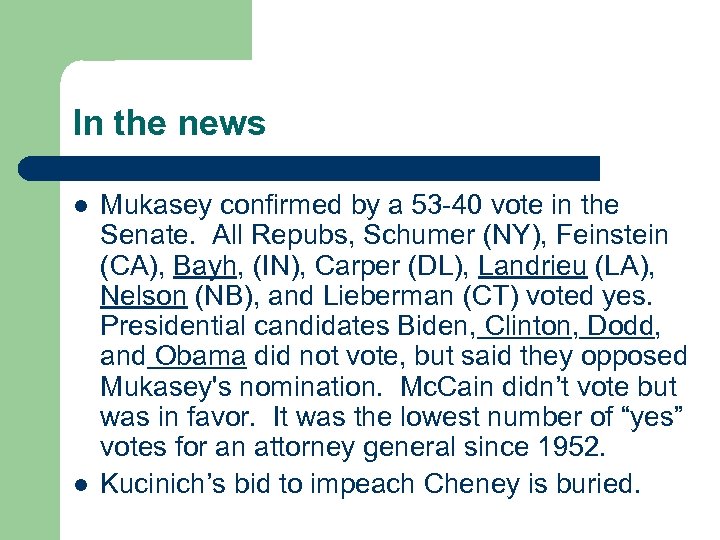 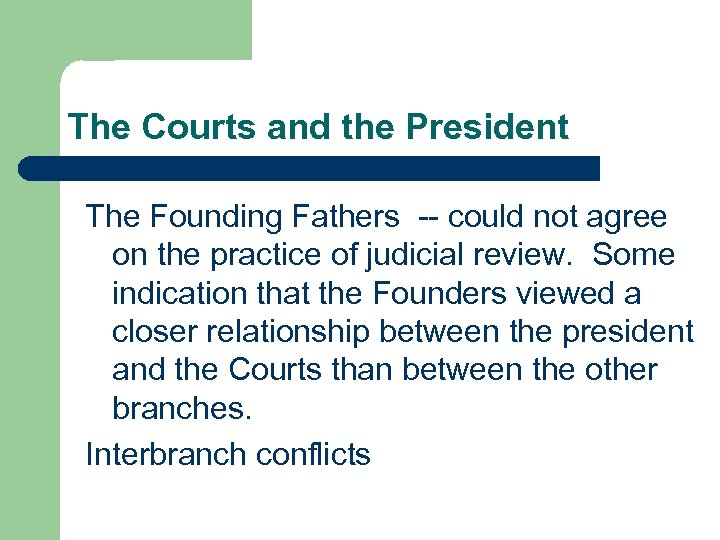 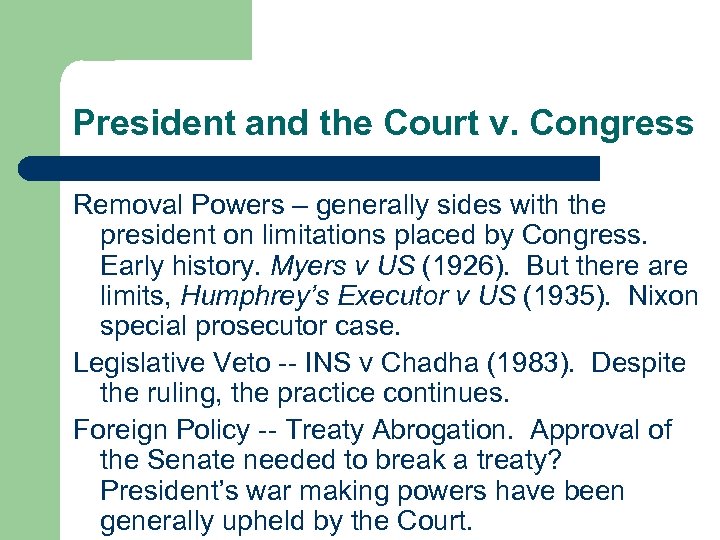 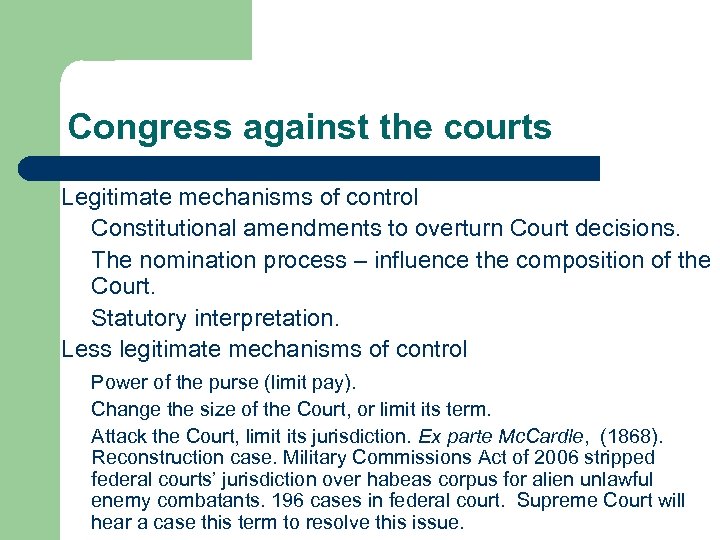 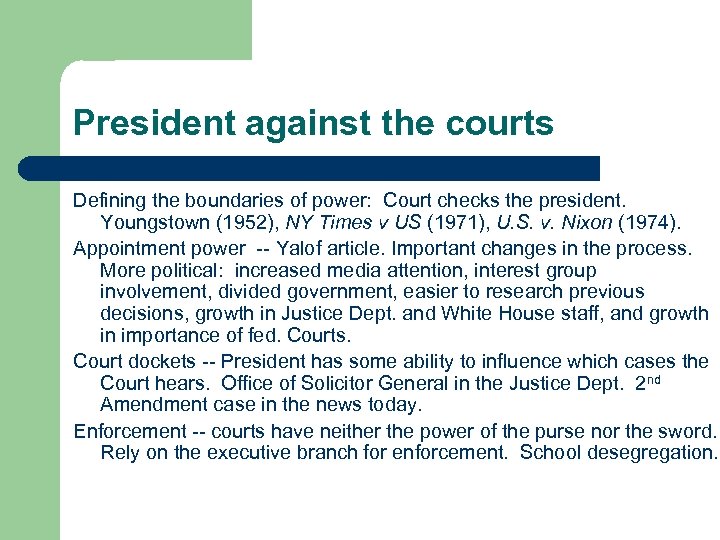 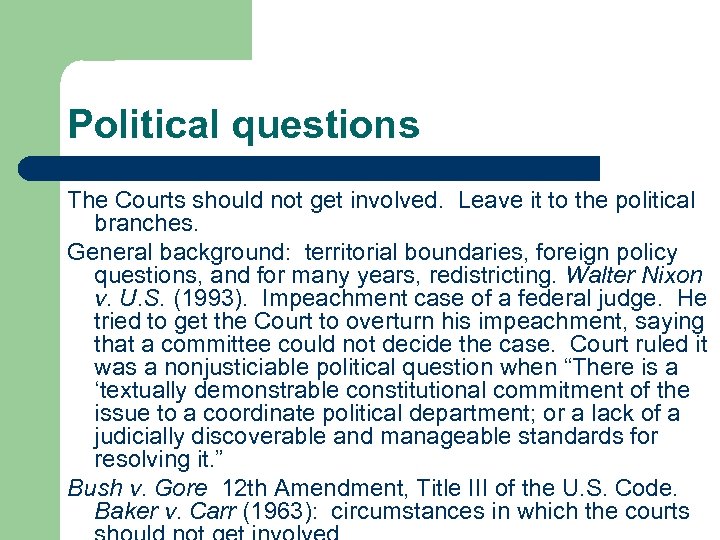 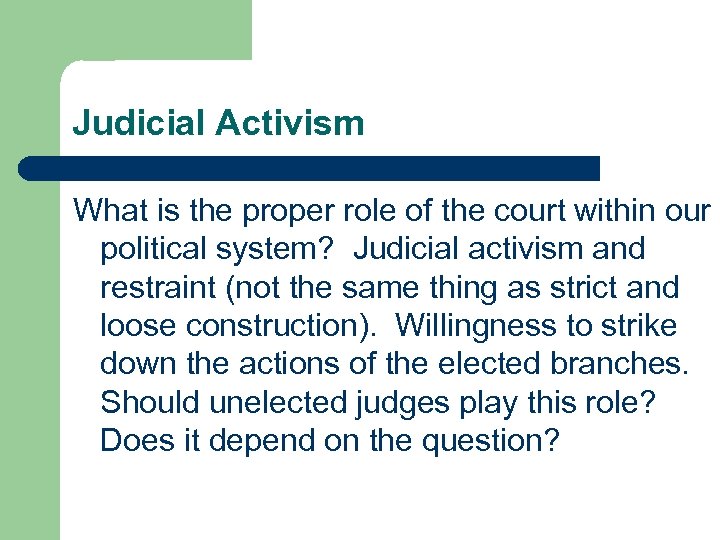 Скачать презентацию In the news l l Mukasey confirmed by

In the news l l Mukasey confirmed by a 53 -40 vote in the Senate. All Repubs, Schumer (NY), Feinstein (CA), Bayh, (IN), Carper (DL), Landrieu (LA), Nelson (NB), and Lieberman (CT) voted yes. Presidential candidates Biden, Clinton, Dodd, and Obama did not vote, but said they opposed Mukasey's nomination. Mc. Cain didn’t vote but was in favor. It was the lowest number of “yes” votes for an attorney general since 1952. Kucinich’s bid to impeach Cheney is buried.

The Courts and the President The Founding Fathers -- could not agree on the practice of judicial review. Some indication that the Founders viewed a closer relationship between the president and the Courts than between the other branches. Interbranch conflicts

President and the Court v. Congress Removal Powers – generally sides with the president on limitations placed by Congress. Early history. Myers v US (1926). But there are limits, Humphrey’s Executor v US (1935). Nixon special prosecutor case. Legislative Veto -- INS v Chadha (1983). Despite the ruling, the practice continues. Foreign Policy -- Treaty Abrogation. Approval of the Senate needed to break a treaty? President’s war making powers have been generally upheld by the Court.

Congress against the courts Legitimate mechanisms of control Constitutional amendments to overturn Court decisions. The nomination process – influence the composition of the Court. Statutory interpretation. Less legitimate mechanisms of control Power of the purse (limit pay). Change the size of the Court, or limit its term. Attack the Court, limit its jurisdiction. Ex parte Mc. Cardle, (1868). Reconstruction case. Military Commissions Act of 2006 stripped federal courts’ jurisdiction over habeas corpus for alien unlawful enemy combatants. 196 cases in federal court. Supreme Court will hear a case this term to resolve this issue.

President against the courts Defining the boundaries of power: Court checks the president. Youngstown (1952), NY Times v US (1971), U. S. v. Nixon (1974). Appointment power -- Yalof article. Important changes in the process. More political: increased media attention, interest group involvement, divided government, easier to research previous decisions, growth in Justice Dept. and White House staff, and growth in importance of fed. Courts. Court dockets -- President has some ability to influence which cases the Court hears. Office of Solicitor General in the Justice Dept. 2 nd Amendment case in the news today. Enforcement -- courts have neither the power of the purse nor the sword. Rely on the executive branch for enforcement. School desegregation.

Political questions The Courts should not get involved. Leave it to the political branches. General background: territorial boundaries, foreign policy questions, and for many years, redistricting. Walter Nixon v. U. S. (1993). Impeachment case of a federal judge. He tried to get the Court to overturn his impeachment, saying that a committee could not decide the case. Court ruled it was a nonjusticiable political question when “There is a ‘textually demonstrable constitutional commitment of the issue to a coordinate political department; or a lack of a judicially discoverable and manageable standards for resolving it. ” Bush v. Gore 12 th Amendment, Title III of the U. S. Code. Baker v. Carr (1963): circumstances in which the courts

Judicial Activism What is the proper role of the court within our political system? Judicial activism and restraint (not the same thing as strict and loose construction). Willingness to strike down the actions of the elected branches. Should unelected judges play this role? Does it depend on the question?

The Mass Media and the Political Agenda Chapter