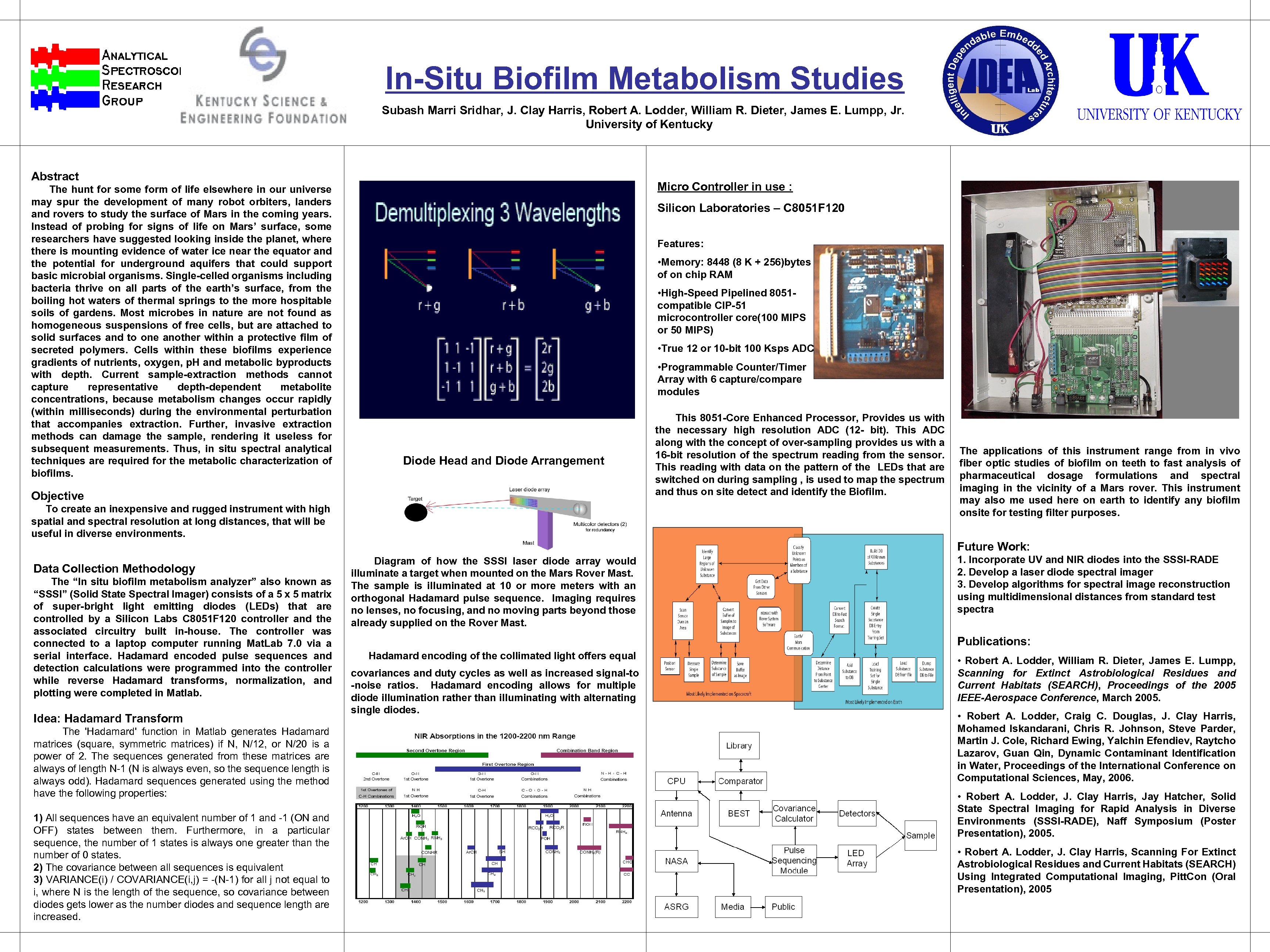 In-Situ Biofilm Metabolism Studies Subash Marri Sridhar, J. Clay Harris, Robert A. Lodder, William R. Dieter, James E. Lumpp, Jr. University of Kentucky Abstract The hunt for some form of life elsewhere in our universe may spur the development of many robot orbiters, landers and rovers to study the surface of Mars in the coming years. Instead of probing for signs of life on Mars’ surface, some researchers have suggested looking inside the planet, where there is mounting evidence of water ice near the equator and the potential for underground aquifers that could support basic microbial organisms. Single-celled organisms including bacteria thrive on all parts of the earth’s surface, from the boiling hot waters of thermal springs to the more hospitable soils of gardens. Most microbes in nature are not found as homogeneous suspensions of free cells, but are attached to solid surfaces and to one another within a protective film of secreted polymers. Cells within these biofilms experience gradients of nutrients, oxygen, p. H and metabolic byproducts with depth. Current sample-extraction methods cannot capture representative depth-dependent metabolite concentrations, because metabolism changes occur rapidly (within milliseconds) during the environmental perturbation that accompanies extraction. Further, invasive extraction methods can damage the sample, rendering it useless for subsequent measurements. Thus, in situ spectral analytical techniques are required for the metabolic characterization of biofilms. Micro Controller in use : Silicon Laboratories – C 8051 F 120 Features: • Memory: 8448 (8 K + 256)bytes of on chip RAM • High-Speed Pipelined 8051 compatible CIP-51 microcontroller core(100 MIPS or 50 MIPS) Images of the Prototype • True 12 or 10 -bit 100 Ksps ADC • Programmable Counter/Timer Array with 6 capture/compare modules Diode Head and Diode Arrangement Objective To create an inexpensive and rugged instrument with high spatial and spectral resolution at long distances, that will be useful in diverse environments. This 8051 -Core Enhanced Processor, Provides us with the necessary high resolution ADC (12 - bit). This ADC along with the concept of over-sampling provides us with a 16 -bit resolution of the spectrum reading from the sensor. This reading with data on the pattern of the LEDs that are switched on during sampling , is used to map the spectrum and thus on site detect and identify the Biofilm. The applications of this instrument range from in vivo fiber optic studies of biofilm on teeth to fast analysis of pharmaceutical dosage formulations and spectral imaging in the vicinity of a Mars rover. This instrument may also me used here on earth to identify any biofilm onsite for testing filter purposes. Future Work: Data Collection Methodology The “In situ biofilm metabolism analyzer” also known as “SSSI” (Solid State Spectral Imager) consists of a 5 x 5 matrix of super-bright light emitting diodes (LEDs) that are controlled by a Silicon Labs C 8051 F 120 controller and the associated circuitry built in-house. The controller was connected to a laptop computer running Mat. Lab 7. 0 via a serial interface. Hadamard encoded pulse sequences and detection calculations were programmed into the controller while reverse Hadamard transforms, normalization, and plotting were completed in Matlab. Idea: Hadamard Transform The 'Hadamard' function in Matlab generates Hadamard matrices (square, symmetric matrices) if N, N/12, or N/20 is a power of 2. The sequences generated from these matrices are always of length N-1 (N is always even, so the sequence length is always odd). Hadamard sequences generated using the method have the following properties: 1) All sequences have an equivalent number of 1 and -1 (ON and OFF) states between them. Furthermore, in a particular sequence, the number of 1 states is always one greater than the number of 0 states. 2) The covariance between all sequences is equivalent 3) VARIANCE(i) / COVARIANCE(i, j) = -(N-1) for all j not equal to i, where N is the length of the sequence, so covariance between diodes gets lower as the number diodes and sequence length are increased. Diagram of how the SSSI laser diode array would illuminate a target when mounted on the Mars Rover Mast. The sample is illuminated at 10 or more meters with an orthogonal Hadamard pulse sequence. Imaging requires no lenses, no focusing, and no moving parts beyond those already supplied on the Rover Mast. 1. Incorporate UV and NIR diodes into the SSSI-RADE 2. Develop a laser diode spectral imager 3. Develop algorithms for spectral image reconstruction using multidimensional distances from standard test spectra Publications: Hadamard encoding of the collimated light offers equal covariances and duty cycles as well as increased signal-to -noise ratios. Hadamard encoding allows for multiple diode illumination rather than illuminating with alternating single diodes. • Robert A. Lodder, William R. Dieter, James E. Lumpp, Scanning for Extinct Astrobiological Residues and Current Habitats (SEARCH), Proceedings of the 2005 IEEE-Aerospace Conference, March 2005. • Robert A. Lodder, Craig C. Douglas, J. Clay Harris, Mohamed Iskandarani, Chris R. Johnson, Steve Parder, Martin J. Cole, Richard Ewing, Yalchin Efendiev, Raytcho Lazarov, Guan Qin, Dynamic Contaminant Identification in Water, Proceedings of the International Conference on Computational Sciences, May, 2006. • Robert A. Lodder, J. Clay Harris, Jay Hatcher, Solid State Spectral Imaging for Rapid Analysis in Diverse Environments (SSSI-RADE), Naff Symposium (Poster Presentation), 2005. • Robert A. Lodder, J. Clay Harris, Scanning For Extinct Astrobiological Residues and Current Habitats (SEARCH) Using Integrated Computational Imaging, Pitt. Con (Oral Presentation), 2005