In an interview on the streets of Cuba 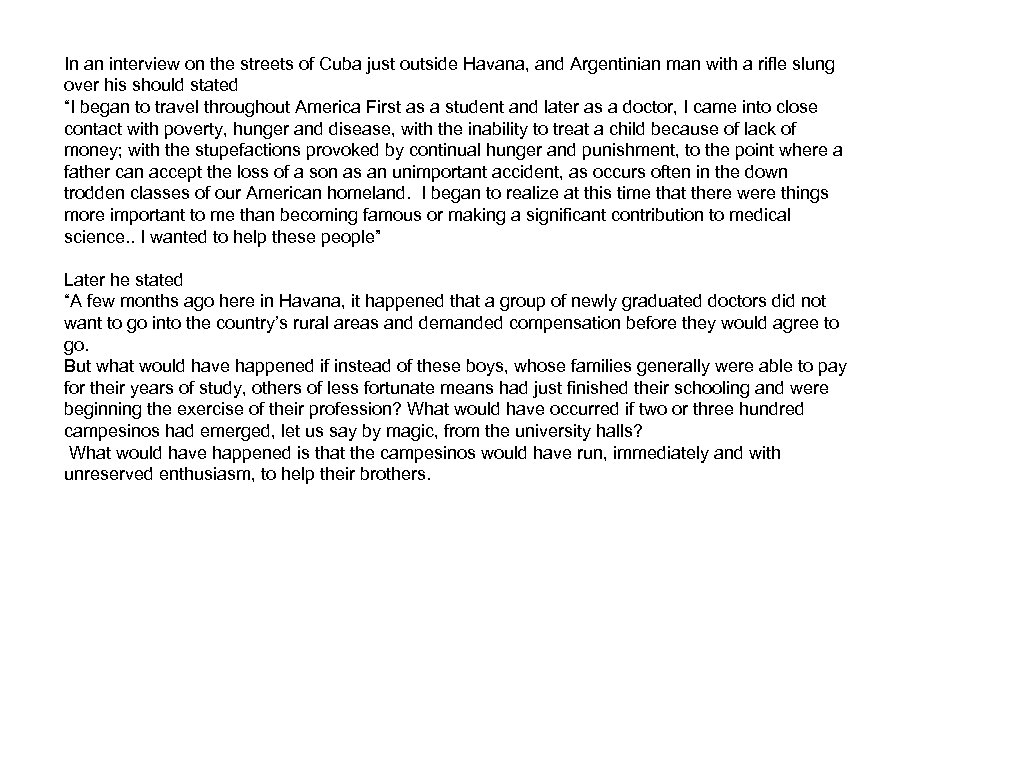 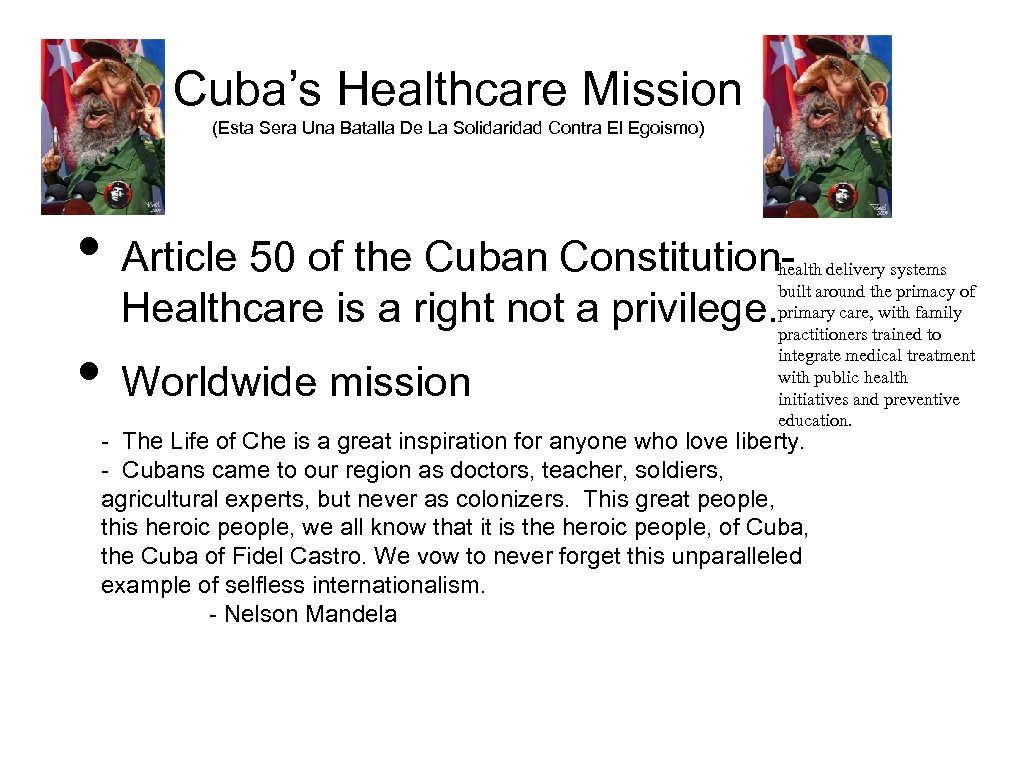 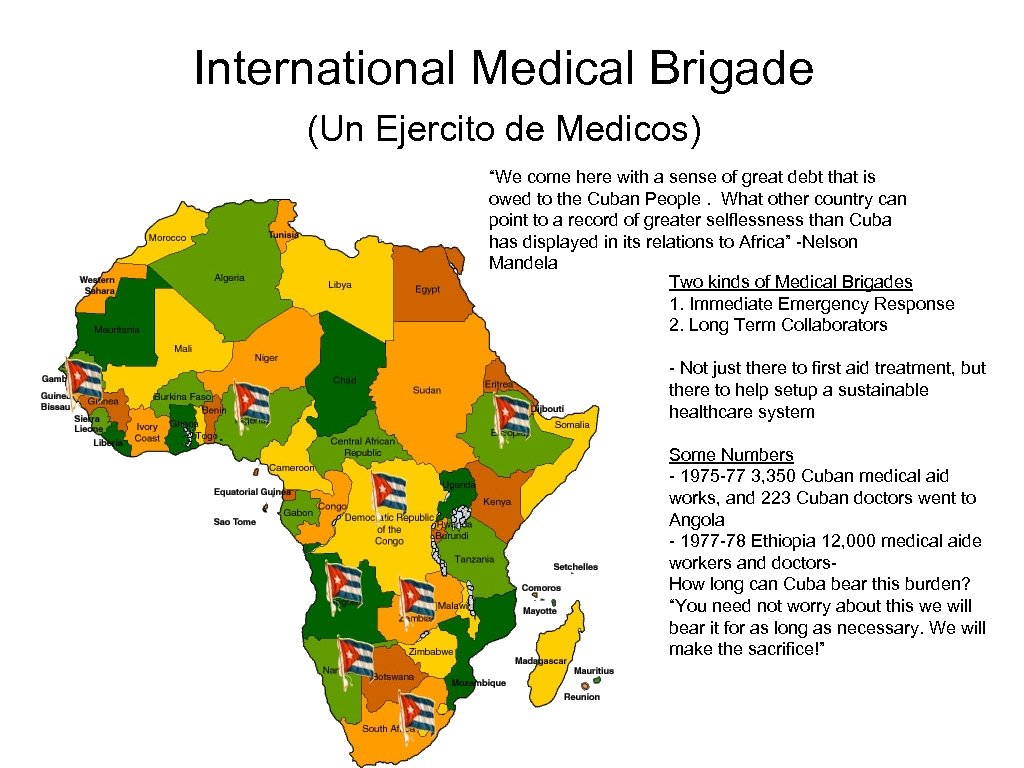 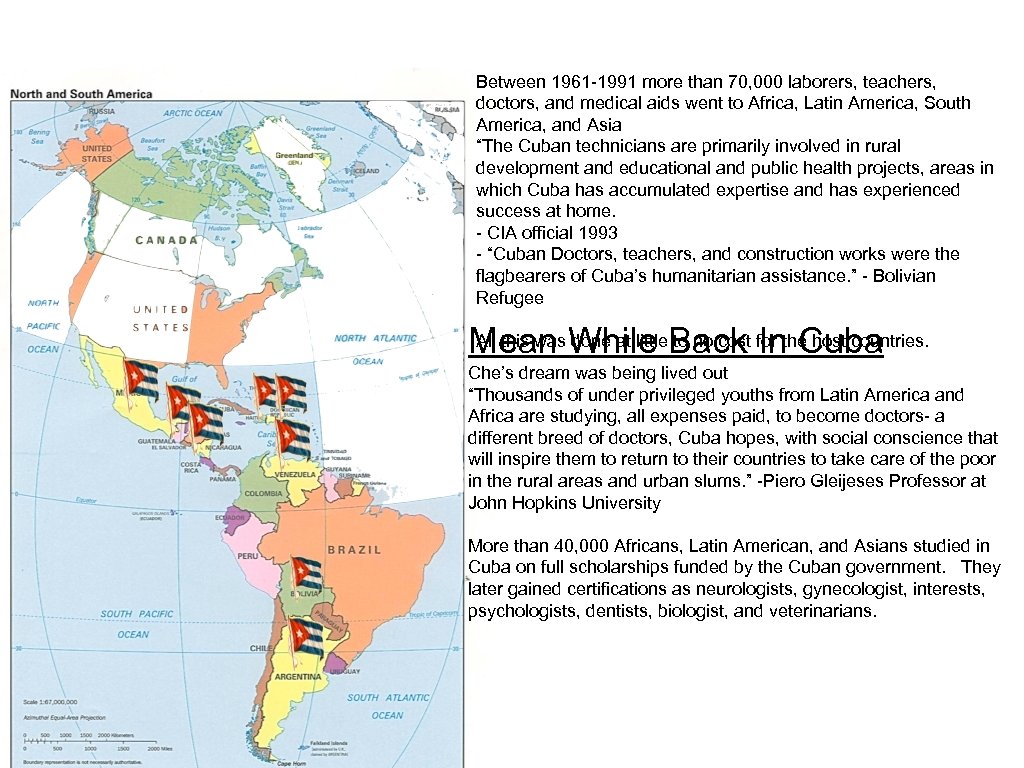 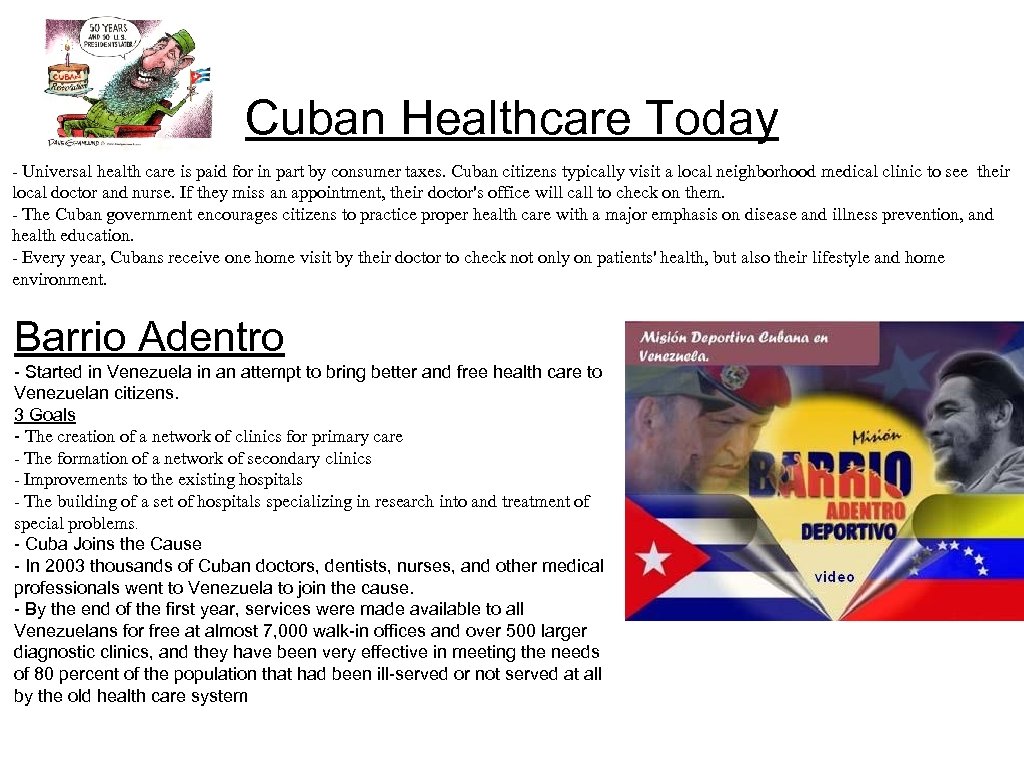 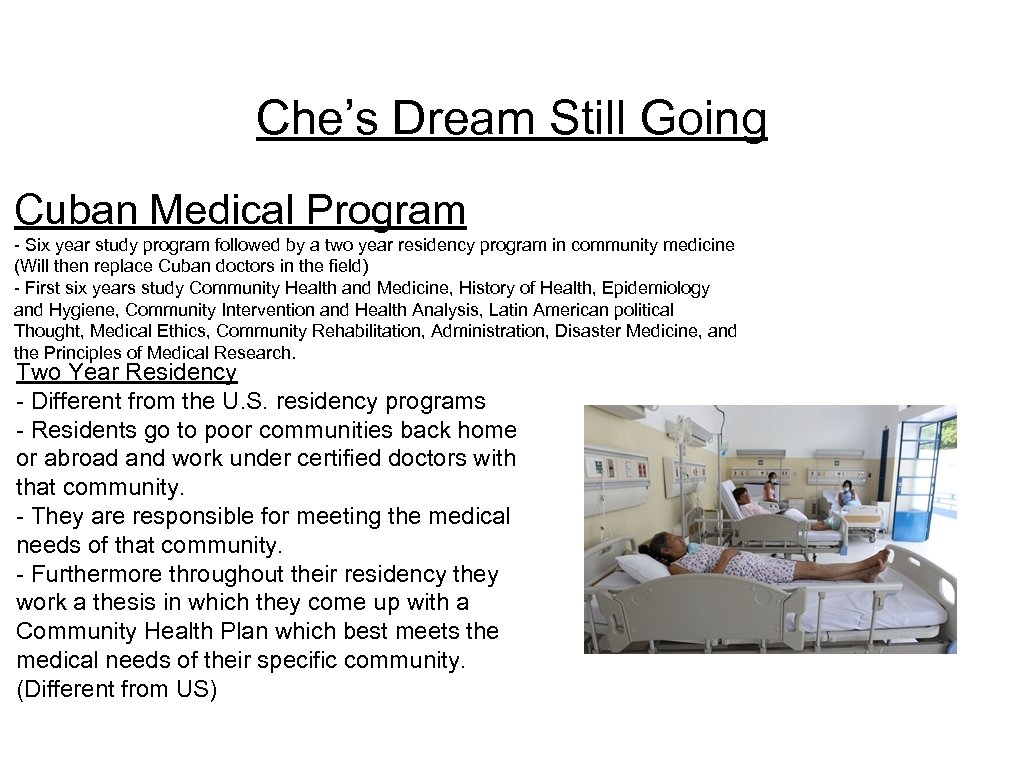 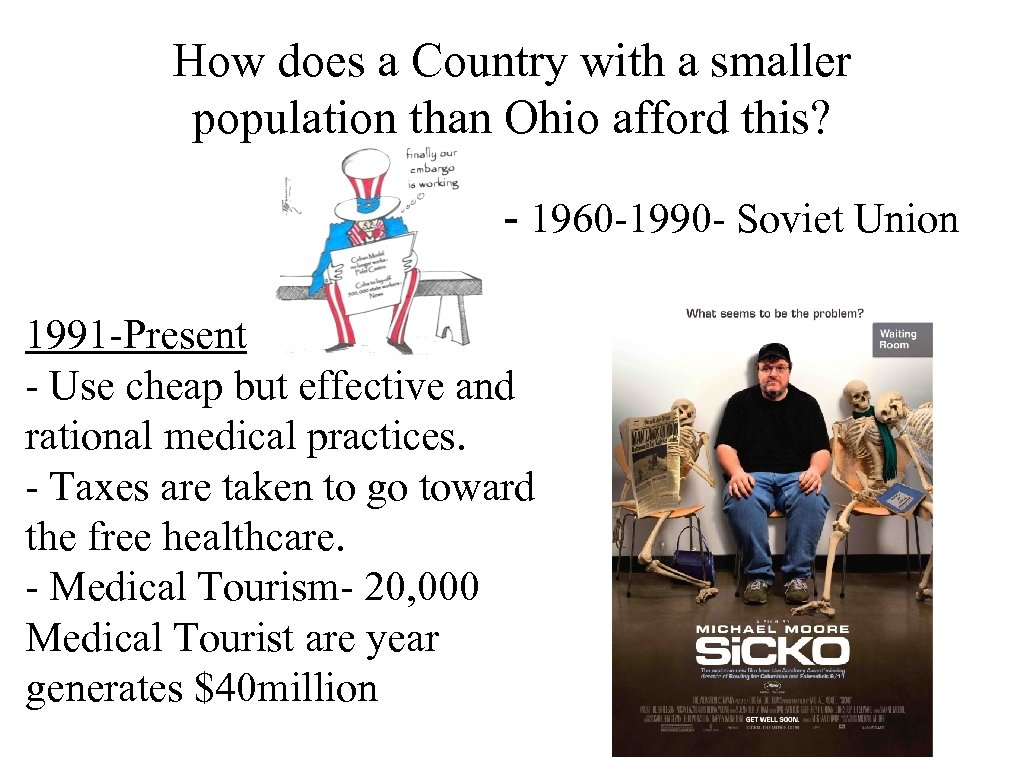 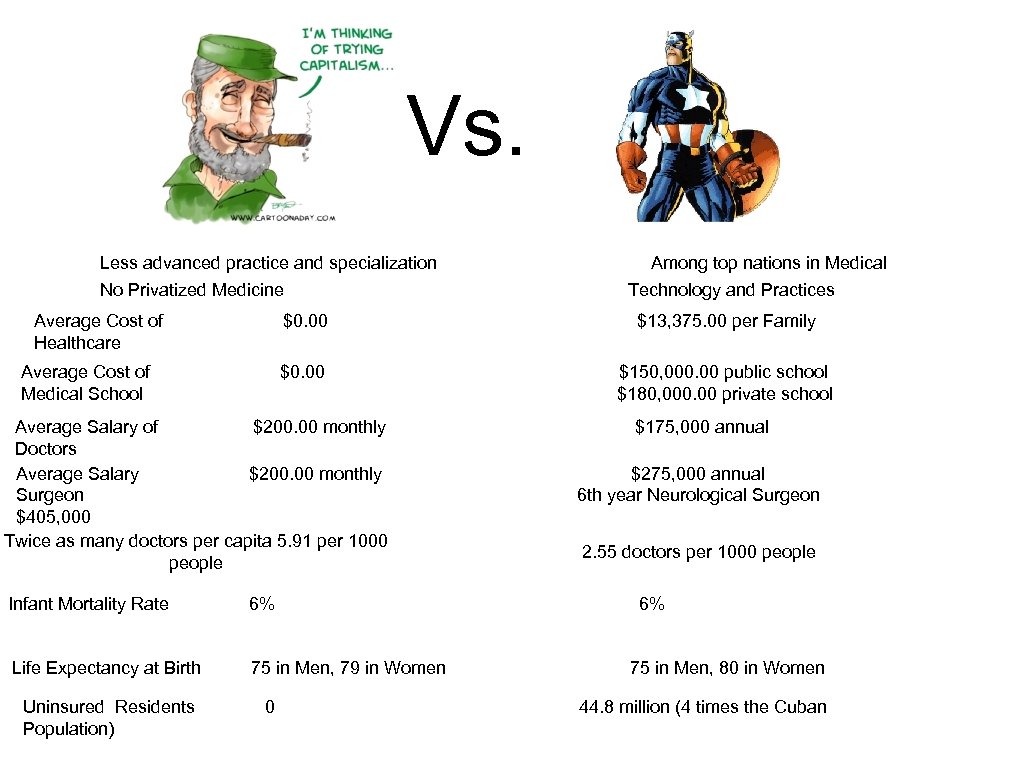 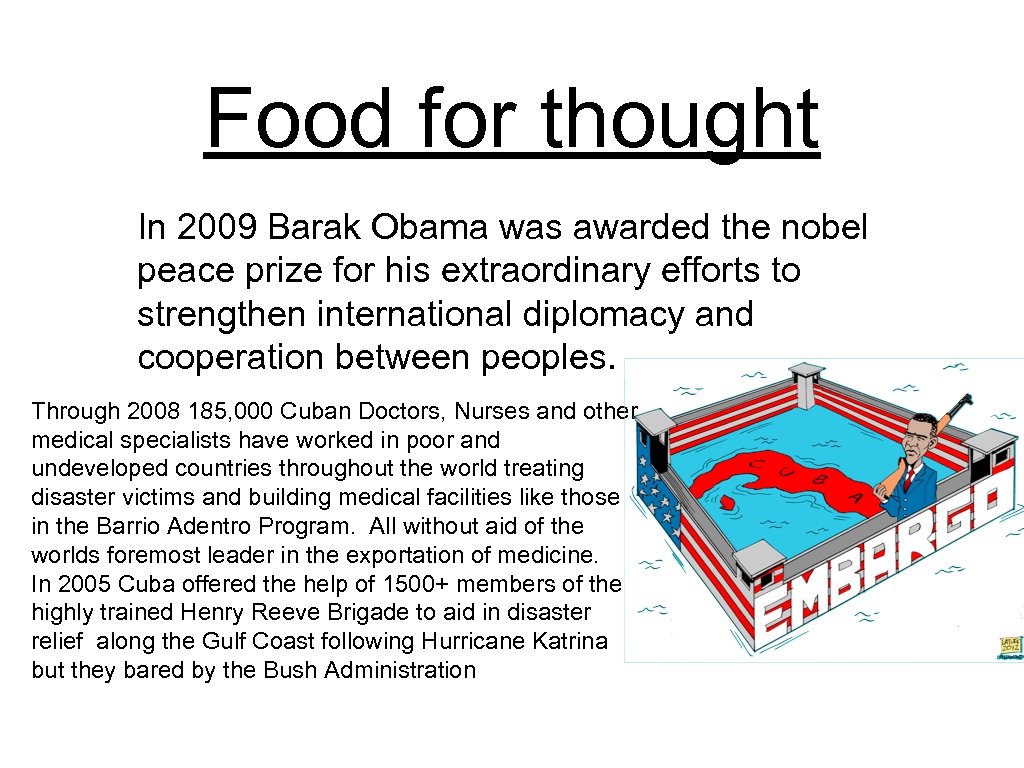 Скачать презентацию In an interview on the streets of Cuba

In an interview on the streets of Cuba just outside Havana, and Argentinian man with a rifle slung over his should stated “I began to travel throughout America First as a student and later as a doctor, I came into close contact with poverty, hunger and disease, with the inability to treat a child because of lack of money; with the stupefactions provoked by continual hunger and punishment, to the point where a father can accept the loss of a son as an unimportant accident, as occurs often in the down trodden classes of our American homeland. I began to realize at this time that there were things more important to me than becoming famous or making a significant contribution to medical science. . I wanted to help these people” Later he stated “A few months ago here in Havana, it happened that a group of newly graduated doctors did not want to go into the country’s rural areas and demanded compensation before they would agree to go. But what would have happened if instead of these boys, whose families generally were able to pay for their years of study, others of less fortunate means had just finished their schooling and were beginning the exercise of their profession? What would have occurred if two or three hundred campesinos had emerged, let us say by magic, from the university halls? What would have happened is that the campesinos would have run, immediately and with unreserved enthusiasm, to help their brothers.

Cuba’s Healthcare Mission (Esta Sera Una Batalla De La Solidaridad Contra El Egoismo) • Article 50 of the Cuban Constitution- health delivery systems built around the primacy of primary care, with family practitioners trained to integrate medical treatment with public health initiatives and preventive education. Healthcare is a right not a privilege. • Worldwide mission - The Life of Che is a great inspiration for anyone who love liberty. - Cubans came to our region as doctors, teacher, soldiers, agricultural experts, but never as colonizers. This great people, this heroic people, we all know that it is the heroic people, of Cuba, the Cuba of Fidel Castro. We vow to never forget this unparalleled example of selfless internationalism. - Nelson Mandela

International Medical Brigade (Un Ejercito de Medicos) “We come here with a sense of great debt that is owed to the Cuban People. What other country can point to a record of greater selflessness than Cuba has displayed in its relations to Africa” -Nelson Mandela Two kinds of Medical Brigades 1. Immediate Emergency Response 2. Long Term Collaborators - Not just there to first aid treatment, but there to help setup a sustainable healthcare system Some Numbers - 1975 -77 3, 350 Cuban medical aid works, and 223 Cuban doctors went to Angola - 1977 -78 Ethiopia 12, 000 medical aide workers and doctors. How long can Cuba bear this burden? “You need not worry about this we will bear it for as long as necessary. We will make the sacrifice!”

Between 1961 -1991 more than 70, 000 laborers, teachers, doctors, and medical aids went to Africa, Latin America, South America, and Asia “The Cuban technicians are primarily involved in rural development and educational and public health projects, areas in which Cuba has accumulated expertise and has experienced success at home. - CIA official 1993 - “Cuban Doctors, teachers, and construction works were the flagbearers of Cuba’s humanitarian assistance. ” - Bolivian Refugee All this was done at little to no cost In Cuba Mean While Back for the host countries. Che’s dream was being lived out “Thousands of under privileged youths from Latin America and Africa are studying, all expenses paid, to become doctors- a different breed of doctors, Cuba hopes, with social conscience that will inspire them to return to their countries to take care of the poor in the rural areas and urban slums. ” -Piero Gleijeses Professor at John Hopkins University More than 40, 000 Africans, Latin American, and Asians studied in Cuba on full scholarships funded by the Cuban government. They later gained certifications as neurologists, gynecologist, interests, psychologists, dentists, biologist, and veterinarians.

Cuban Healthcare Today - Universal health care is paid for in part by consumer taxes. Cuban citizens typically visit a local neighborhood medical clinic to see their local doctor and nurse. If they miss an appointment, their doctor's office will call to check on them. - The Cuban government encourages citizens to practice proper health care with a major emphasis on disease and illness prevention, and health education. - Every year, Cubans receive one home visit by their doctor to check not only on patients' health, but also their lifestyle and home environment. Barrio Adentro - Started in Venezuela in an attempt to bring better and free health care to Venezuelan citizens. 3 Goals - The creation of a network of clinics for primary care - The formation of a network of secondary clinics - Improvements to the existing hospitals - The building of a set of hospitals specializing in research into and treatment of special problems. - Cuba Joins the Cause - In 2003 thousands of Cuban doctors, dentists, nurses, and other medical professionals went to Venezuela to join the cause. - By the end of the first year, services were made available to all Venezuelans for free at almost 7, 000 walk-in offices and over 500 larger diagnostic clinics, and they have been very effective in meeting the needs of 80 percent of the population that had been ill-served or not served at all by the old health care system

Che’s Dream Still Going Cuban Medical Program - Six year study program followed by a two year residency program in community medicine (Will then replace Cuban doctors in the field) - First six years study Community Health and Medicine, History of Health, Epidemiology and Hygiene, Community Intervention and Health Analysis, Latin American political Thought, Medical Ethics, Community Rehabilitation, Administration, Disaster Medicine, and the Principles of Medical Research. Two Year Residency - Different from the U. S. residency programs - Residents go to poor communities back home or abroad and work under certified doctors with that community. - They are responsible for meeting the medical needs of that community. - Furthermore throughout their residency they work a thesis in which they come up with a Community Health Plan which best meets the medical needs of their specific community. (Different from US)

How does a Country with a smaller population than Ohio afford this? - 1960 -1990 - Soviet Union 1991 -Present - Use cheap but effective and rational medical practices. - Taxes are taken to go toward the free healthcare. - Medical Tourism- 20, 000 Medical Tourist are year generates $40 million

Food for thought In 2009 Barak Obama was awarded the nobel peace prize for his extraordinary efforts to strengthen international diplomacy and cooperation between peoples. Through 2008 185, 000 Cuban Doctors, Nurses and other medical specialists have worked in poor and undeveloped countries throughout the world treating disaster victims and building medical facilities like those in the Barrio Adentro Program. All without aid of the worlds foremost leader in the exportation of medicine. In 2005 Cuba offered the help of 1500+ members of the highly trained Henry Reeve Brigade to aid in disaster relief along the Gulf Coast following Hurricane Katrina but they bared by the Bush Administration